Helium Crypto: Connecting Trustless and Private Data for All

In today’s tech-connected world, concepts such as the Internet of Things (IoT) are gaining more attention by the day. Within the IoT, not only electronic products such as computers, smartphones, tablets and TVs, but everything we use in our home or at work or see on the street becomes connected. With the IoT, it’s possible to access and control data for each object remotely. While giant corporations like Amazon also provide IoT frameworks, decentralized blockchains like Helium and IOTA aim to bring trustless and private data to everyone.

Helium network is a peer-to-peer (P2P) blockchain-based network that aims to provide a safe and cost-effective way to connect low-power IoT devices via a low-range, wide-area wireless technology called LoRaWAN to interact with the internet.

Co-founded by Shawn Fanning, Sean Carey, and Amir Haleem, Helium's goal is to optimize IoT wireless communication and prepare it for the decentralized future. This means that millions of wireless devices worldwide will be able to connect to the internet at a low cost. Dubbed “The People’s Network”, Helium aims to help local businesses reach out to a wider audience via cheaper and more powerful wireless connections.

How Is the Helium Network Secured?

Helium network runs on a blockchain infrastructure with a unique proof of coverage consensus protocol combined with a proof of location system. The blockchain is connected through radio waves transmitted by nodes running low-cost special mining devices known as hotspots. The hotspots can be purchased from the Helium website.

The proof of location mechanism validates the hotspot locations, while proof of coverage verifies that miners are indeed providing network coverage. The blockchain rewards the participating nodes with its native token, Helium (HNT). HNT is given to Helium miners whenever hotspots transfer connection data across the blockchain.

HNT is designed to meet the needs of two key elements within the Helium ecosystem:

The hotspot devices on Helium use Data Credits (DC) to transfer data across the network. These are also used as blockchain transaction fees. Data Credits are created by burning HNT. They are non-interchangeable and tied to a single user.

Proof of coverage is an updated proof of work model that uses radio frequency (RF) waves to check whether hotspots are providing legitimate wireless coverage. The consensus mechanism is secured by the solution of a challenge, which is solved by three roles interacting within a network – Challenger, Beaconer and Witness.

Challenger: The challenger issues the challenge and checks that the hotspots are indeed providing wireless coverage via the RF network within a specific location.

Beacon: The beacon, also known as the beaconer or challengee, that transmits the data package out to other hotspots nearby.

Witness: The surrounding hotspots that detect and report the proof-of-coverage activity to the challenger.

All the network participants are rewarded with Helium crypto tokens (HNT) with the completion of proof of coverage and network data transfer.

A low-cost hardware device that serves as both a Helium miner and a wireless gateway for Helium.

An open-source wireless network protocol to locate the positions of hotspots.

A system which verifies the hotspot locations via WHIP.

Helium LongFi combines the long range wide area network (LoRaWAN) wireless protocol with Helium so that any LoRaWAN device can transfer data over the network. LongFi offers roaming features and supports micropayment transactions so that customers only pay for their network usage.

Unlike most blockchains, which focus on the decentralization of software, Helium aims to decentralize physical hardware through the interconnection of devices.

The Helium network is also powered by proof of coverage, a novel consensus algorithm created specifically for the network. The mechanism is combined with the Honey Badger Byzantine fault tolerance (HBBFT) protocol, which allows for consensus amidst certain node failures.

Naturally decentralized by design – The network provides no incentive to take advantage of factors, such as the cost of cheap energy or distributing more hardware in the same place. Hence, powerful players won’t need to get together to form mining pools, which frequently results in an increasingly centralized protocol (as is often the case for proof of work mechanisms such as those of Bitcoin and the current version of Ethereum.

Economical – Mining is done via an affordable, simple device, rather than an expensive GPU. It takes only a simple installation of a hotspot by the window — and you can start mining.

Less Wasteful – Since the blockchain is connected through small devices, the energy needed to run them is far less than that required for the proof of work protocol.

Competing with established companies – Helium may be unable to gain traction, as its concept of an IoT framework is already offered by tech giants like Amazon and Google. There are also already many existing open-source IoT platforms, such as Kaa IoT and Zetta.

HNT is the native cryptocurrency and protocol token of Helium. The native token powers the entire ecosystem and is rewarded to the nodes that participate in the blockchain. Miners earn HNT when they provide and validate wireless coverage, and when devices on the network connect to the internet through the Helium hotspots.

How Else Can HNT Be Earned?

Within the blockchain, users can stake HNT to become validators and secure the network. Note that validators are new users on the Helium ecosystem whose job is to verify transactions and add new blocks to the blockchain. You’ll be required to stake 10,000 HNT to become a validator with Helium. Remember that if you are a validator, you must always be online and up-to-date for you to earn rewards — otherwise, you’re penalized if you’re offline or not up-to-date.

For crypto enthusiasts, HNT can be traded speculatively on top crypto exchanges. This means you can either invest in HNT crypto or trade HNT derivatives. 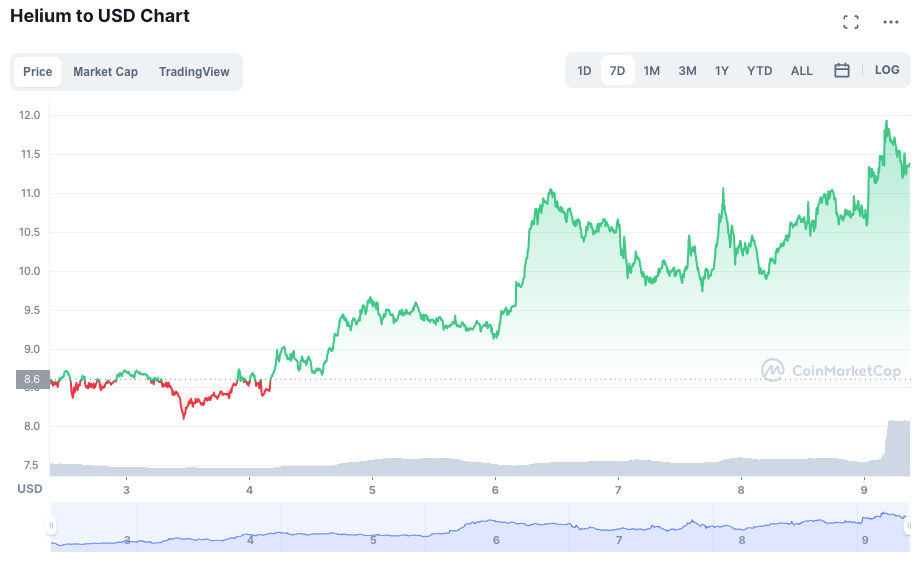 Note: Figures below are accurate as of this writing (9/6/2022) and are approximated up to two decimal places.

Helium is launching the Helium DAO HIP51 proposal, which will eventually broaden Helium’s reach from IoT to more network protocols, like 5G, mobile and WiFi. This will likely boost the Helium price, as the new Helium tokens from the added protocols would be backed by HNT. As the Helium ecosystem grows, the coin would see even more bullish prospects for its value.

The burn and mint equilibrium (BME) protocol token model in the Helium blockchain also means that the supply of HNT is finite. As the supply decreases, demand will increase. With the additional network protocols, this means that more Data Credits will be needed for transactions, leading to the burning of more HNTs. This points to an ever-growing demand for the HNT coin.

For passive investors, mining HNT offers lucrative passive income opportunities. After all, there are no maintenance costs associated with running Helium hotspots. The only cost you’ll incur is the initial expense of buying the hardware.

How to Buy Helium Crypto (HNT)

You can purchase the HNT token on many notable cryptocurrency exchanges. The fastest and easiest way to buy HNT is on the Bybit exchange. There are two ways you can invest in HNT on Bybit: Spot or Derivatives. The following steps show how to buy HNT as a derivative.

To buy or sell the HNT token (or other cryptocurrencies) on Bybit, you must be a registered exchange member. (If you already have an account with Bybit, please skip to the next step.) Account creation is a straightforward process that takes only a few minutes. Visit the official Bybit website and click on Sign Up in the top right corner. Enter your phone number or email address, and set up your account. You can start trading immediately after your account is verified.

To begin trading HNTUSDT, you must first deposit USDT as the HNT token is paired with USDT on Bybit. Visit the Buy Crypto section on the exchange and pick your preferred fiat currency to purchase USDT. Enter the number of USDT tokens you want to purchase and complete your transaction. Once the transaction is successful, USDT tokens will be transferred to your Bybit wallet. To deposit USDT, start by clicking on Assets → Derivatives, and then search for USDT. Finally, click on the Deposit button.

Click on Derivatives → USDT Perpetual → HNTUSDT pair. You’ll be redirected to a trading terminal page, as seen in the screenshot below. 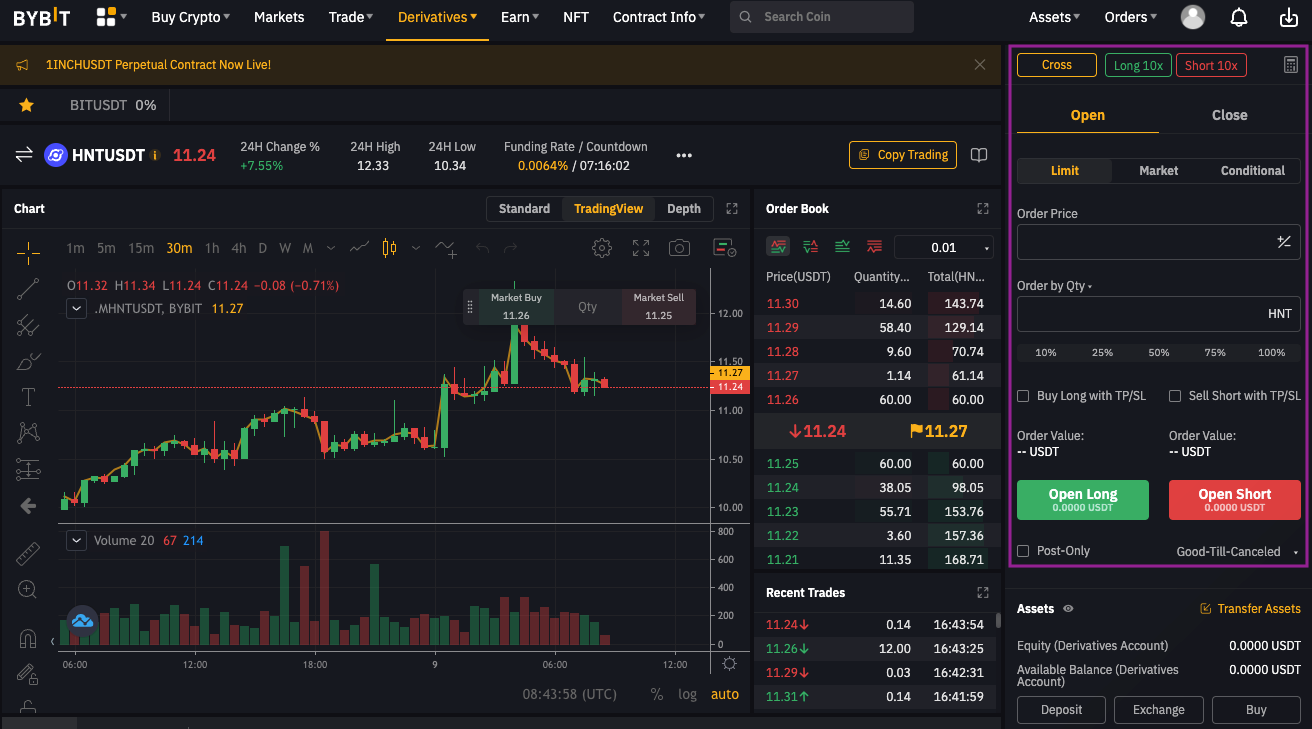 To trade the HNTUSDT pair, you can use a limit, market or conditional order. We recommend using a limit order, as it offers lower fees, reduces slippage and allows you to trade the asset class at your preferred price.

Enter the price at which you wish to buy the HNT token, as well as the number of HNT tokens you’d like to buy. (Editor’s note: Before making a trade, please ensure that you’re well-informed on the risks of margin trading.)

You can open long or short trades with a single click. Select Long if you believe that the prices will go upside, and Short if you think the price will move downside. To manage your risks, make sure to include both take-profit and stop-loss orders in your trades. You can choose from the available percentages or key in your own preferred figure.

Finally, you can keep track of your transactions in the Order Status section that’s located at the bottom of the trading terminal. To close your trade, choosing to close by limit will also help ensure that you close at your preferred price.

In a world where blockchain projects strive to be relevant, Helium stands out as a decentralized wireless network created for the Internet of Things (IoT). Its unique consensus protocol has allowed it to become the world's first peer-to-peer blockchain network to provide low-power IoT devices with a secure and cost-effective way to send data to and from the internet.