What a Market Correction Is & What to Do When it Happens

Corrections make regular appearances with financial markets, especially for crypto. Every crash started as a correction, but not all corrections lead to crashes.

In this article, we’ll discuss what a market correction is, what happens during a correction, and what you should do to prepare for it.

Market cycles comprise the bull rallies and bear corrections all of the financial markets. In general, markets never move in straight lines as there’s an ebb and flow, a back-and-forth of pricing that shakes out weaker holders.

Market cycles have been around since the beginning of trading, and this phenomenon continues with Bitcoin and other cryptocurrencies to this day. 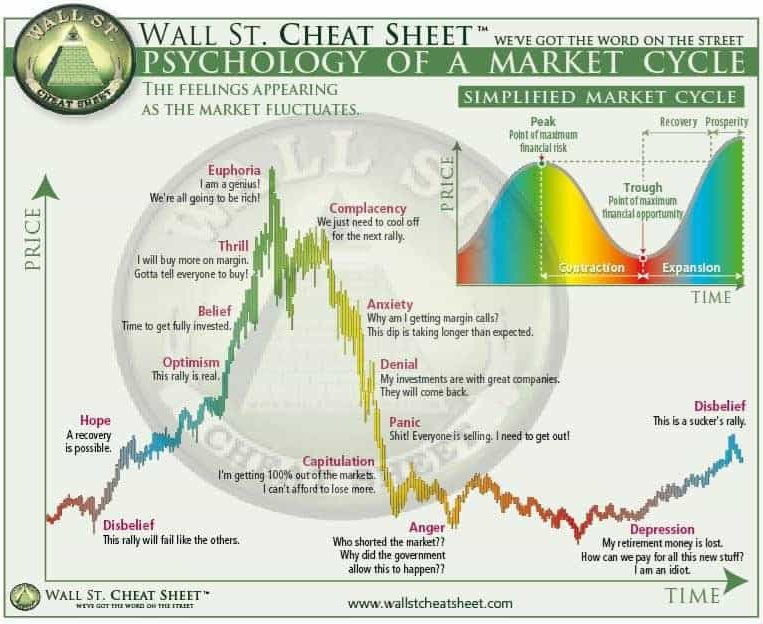 The market cycle starts off with the hope that prices will rise. Often, this is accompanied by strong fundamentals, or an asset isn’t widely known to early adoption.

As prices rise, the sentiment changes to euphoria as we begin to believe we are geniuses to have figured out the market. At that point, complacency sets in, and the market is no longer priced at value.

A market correction begins, and initially, investors believe it’s just a dip in the overall uptrend. However, when this correction turns into a bear market, anxiety, denial and panic begin to set in.

Those emotions can be strong, leading traders to close out of their positions when severe losses have already been incurred.

After that, a rebound usually appears and traders become angry that they’ve closed out at the worst possible time.

What Is a Market Correction?

A market correction is a decline of ≥ 10% in the price of an asset or financial market. Corrections can span any amount of time lasting from a matter of hours to months — or even years.

The decline is called a “correction” because the dip is fairly small, and usually indicates that the cryptocurrency had rallied too far from its established trend. In the crypto market, corrections are more frequent than with stocks, and can happen within a matter of hours due to crypto’s volatile nature.

Corrections are usually followed by recoveries, but they can lead to more pronounced declines known as bear markets.

Bear markets are larger market corrections, with declines of 20% or more.

A bear market is believed to receive its name from the way a bear attacks its prey by swiping its paws downward. As a result, bear markets are synonymous with downward and falling prices.

What Happens During a Market Correction

The most obvious result of a market correction is an adjustment of prices to lower levels. For a variety of reasons, traders and investors feel the current pricing is too high and not worth the risk of tying up their capital.

As a result, current investors decide to sell all, or a portion, of their holdings to lock in profits. New investors who are considering buying put off their investments with the hope of buying them in the future at lower prices.

Declining crypto prices begin to draw in and attract more buyers. These investors are interested, having previously felt that the pricing was too high. Now that prices have declined, they’re motivated to make their investment, and the price rebounds in a rally.

What Triggers the Correction

The list of reasons a market correction begins is potentially quite long and debatable. Not every analyst would agree on why the correction is unfolding, and the reasons aren’t always obvious.

A lot of times, the introduction of new, negative catalysts can trigger investors to sell. For example, rumors of a potential war erupting — or a pandemic being declared— can spook investors, causing them to sell. 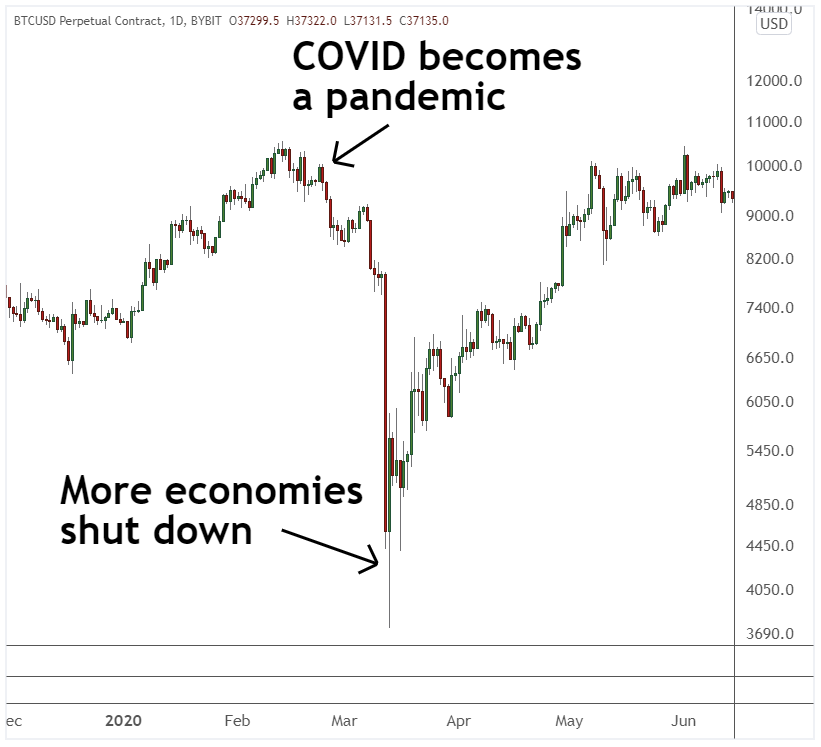 Notice how the catalyst is oftentimes a rumor. In March 2020, the pandemic was declared and the market crashed. As reality set in, political leaders took action and shut down their economies to keep people distanced. At that point, the markets recovered, even though the economies had just begun to shut down. The correction typically begins on the rumor (pandemic declared, various unknowns) before the action takes place (economies shut down).

Other catalysts for a correction can be fundamental in nature, such as slowing economic growth or monetary stimulus being withdrawn. Without extra discretionary money flowing in, investors will have less money to trade crypto.

Lastly, the market’s sentiment may signal a correction is about to take place. When a rally has been going on for a while, and then prices accelerate even faster, this could be a sign of too much enthusiasm that alerts the whales and smart money to start selling.

A bull rally needs an increase of buyers. A correction needs only sellers or a lack of buyers. When prices stretch, buyers shy away and sellers are motivated, leading to a correction.

How Long Does a Correction Last?

A correction can last any length of time, from minutes and hours to months and years. Ultimately, it’s more about the depth of the decline than the time spent in the correction.

Since corrections are relatively shallow, their durations tend to be relatively short. It’s not unusual for crypto markets to experience 10% or greater movement in a week (and sometimes even in a day!).

As the market starts to decline, it will fall farther away from its high. Eventually, a low is formed, and the market rallies again. We won’t know for sure when the correction is over until the price reaches a new high.

However, technical analysts try to uncover clues that the correction is over, and that a rally is underway to new highs. Analysts will use chart patterns — such as triangles and wedges, combined with Japanese candlestick patterns, like the bullish engulfing or harami — to signal the potential start of a new trend.

What Should You Do During the Correction Period?

At their most basic level, market corrections occur because investors and traders are more motivated to sell than to buy. Every decline starts as a correction. However, we don’t know (until after the fact) if the correction is turning into something deeper, like a bear market or a crash.

Therefore, it’s important to manage trades before a correction appears, and after the correction has begun. Here are three strategies to help give you perspective and a plan through a correction.

This first strategy is based on preparing for a correction. If you see clues for a developing top in the crypto markets, such as bearish candlestick formations or oscillators turning down, then consider reducing your long exposure.

The quickest and easiest way is to sell out of all your positions. 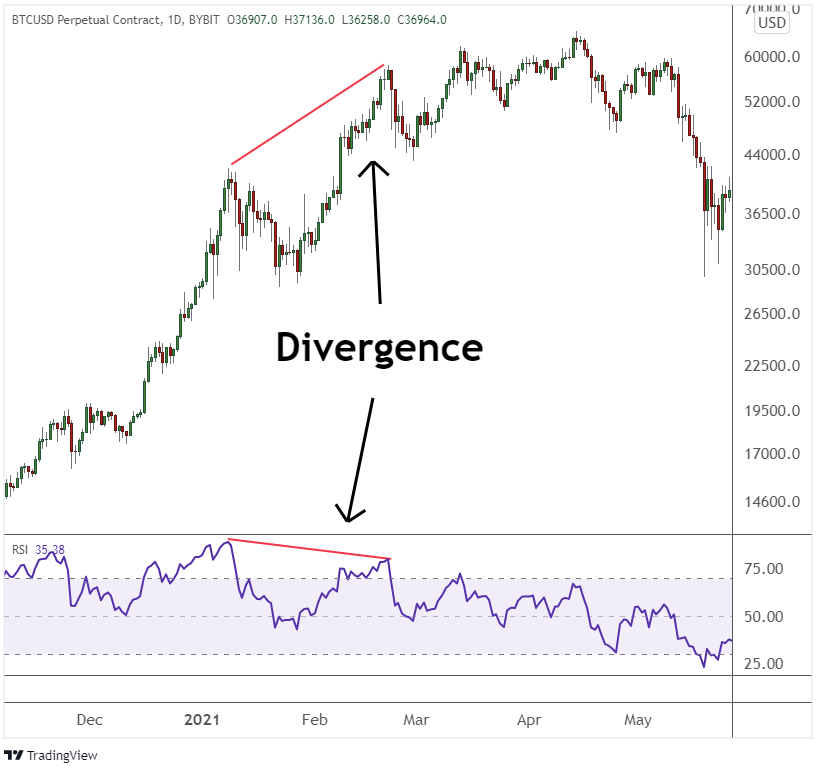 For example, a trader in Bitcoin might notice bearish divergence appearing on the charts. The price of Bitcoin continues to make higher highs, while the Relative Strength Index (RSI) oscillator makes a lower high.

This type of behavior suggests the market may correct lower.

If a trader notices this on their chart, they can decide to close out their long position in Bitcoin. Another option is to close out only a portion of their position, so that they remain invested in Bitcoin should the price continue to rally.

Whereas the first strategy prepares for a correction, this second technique is geared toward the action to take after the correction has begun. 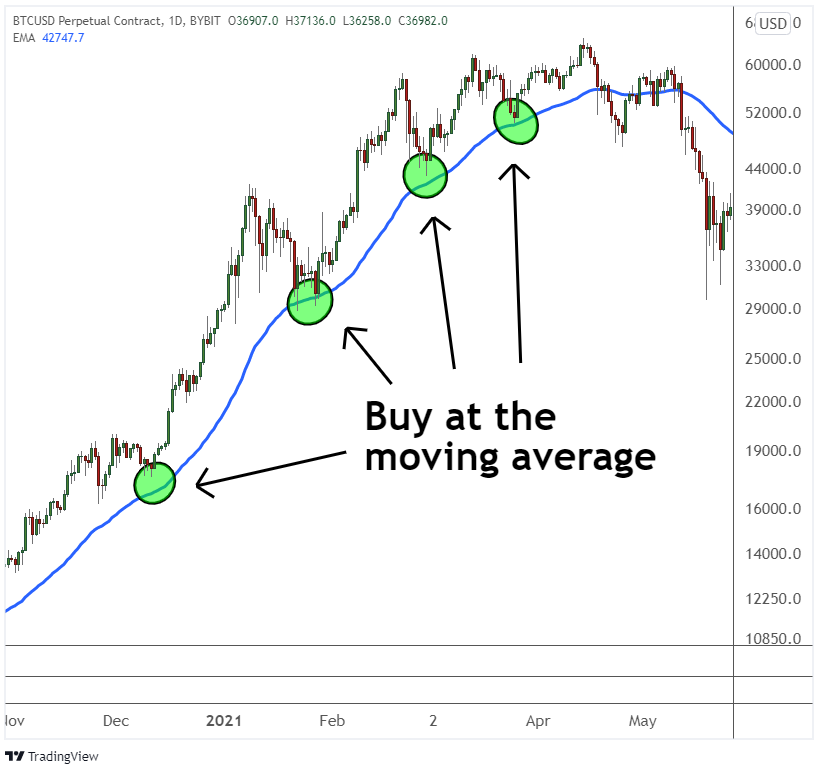 As Bitcoin rallied during late 2020 and early 2021, there were times when a correction would temporarily consolidate those gains. A trader could use longer-term trend lines, or as in the case of Bitcoin above, a moving average to identify a strong level of support.

Above, we have a 50-period exponential moving average (EMA) applied to the chart. The moving average calculates the price data for the past 50 days (to determine this average price). When the market is well above the line, the EMA suggests Bitcoin is overheated and due for a correction. When Bitcoin returns to the 50-period EMA, this suggests that it’s more fairly priced.

Therefore, a trader could open new buy positions at a longer-term moving average, when a correction is underway.

A third strategy is dollar-cost averaging, intended for those traders who are newer chart readers. This strategy will help them remain invested for the long haul — while not getting whipsawed out of good positions.

When you’re HODLing a cryptocurrency, volatility can erupt without notice and erase the floating gains you’re carrying. Dollar-cost averaging (DCA) is a solution to this volatility.

DCA is a way to divide up your total investment, as it initiates regular systematic entries. With DCA, you can lessen the effect of price volatility because sometimes you’ll be buying at higher prices, and other times at lower prices.

For example, let’s assume an investor has $5,000 they want to put into Bitcoin because they feel BTC has a lot of upside potential left in it.

They want to space out their investment, so they decide to invest $1,000 on the first of the month for five consecutive months. This way, they’ll buy $1,000 worth of Bitcoin each month— regardless of what the price is. Here’s a summary of their purchases.

Notice how this trader’s average entry price at the end of five months is $42,925. This figure is only slightly above the price of Bitcoin on August 1, 2021.

The five months of DCA above were during a severe bear market that ripped 50% from the price of Bitcoin. A trader with a $5,000 lump-sum investment near the high could be down 50%. The DCA trader was down about 10%. This is a great example of how DCA can smooth out the volatility in price so each correction becomes less painful. The corrections become less painful over time — because you’re able to buy more coins at a cheaper price.

What If the Market Continues to Crash?

Crashes in the crypto market are common and normal. If the market is collapsing, the best thing you can do is stay calm. If you’ve had a trading plan since before the crash, then execute that plan. For example, if the plan calls for DCA and buying more at a lower price, then go ahead and move forward with the plan.

If you don’t have a plan, and feel yourself becoming more emotional as prices are crashing — well, remember that all crypto crashes have rebounded. That doesn’t mean that prices will always rebound. Nevertheless, one prominent effect of a crash is to drive weaker hands to sell their coins.

Once they’ve done so, no more traders want to sell — and the price begins to rebound. As this rebound is taking place, begin to make a plan so you’re better prepared for the next time the market crashes.

In other words, when you lose, don’t lose the lesson.

Market corrections are a natural part of financial market cycles. These corrections are needed to bring valuations back in line with longer-term averages and trend growth.

When trading, it’s possible to spot clues to upcoming corrections so you can take action to protect your portfolio. If you find yourself unprepared, don’t panic. The stronger the crash, the more it’s exacerbated by unprepared traders or those basing their decisions in the emotions of the moment. Wait for the rebound to consider how you’ll prepare better for the next time.