What a Reversal Candle Pattern Is & How to Trade with It

Reversal candle patterns are an important tool within a trader’s toolbox. They’re useful in crypto trading because the market can make violent trend changes, causing large losses in a trader’s account.

What Is a Reversal Candle Pattern?

A reversal candle pattern is a formation of Japanese candlesticks arranged in such a way as to indicate the end of an existing trend in favor of an opposing one.

Candlestick patterns are a visual aid, helping traders see what the market sentiment is — and when that sentiment may be shifting. They’re easy to spot, allowing the trader to make swift decisions.

There are two important distinguishing factors between bullish and bearish reversal patterns.

The first factor is the shape of the pattern. The arrangement and sequence of the candles give rise to the pattern’s shape. Some patterns produce large candle bodies, while others produce large wicks, or shadows.

The second distinguishing difference is the location of the pattern within a trend.

When a pattern appears in a downtrend, it indicates a potential rally, changing the trend from downward to upward. Conversely, when a possible reversal pattern forms in an uptrend, it provides a warning to traders that the price may correct or even crash.

How Is Reversal Different from Retracement?

We’ve already established that a reversal is the changing of a trend. A retracement is the temporary reversal of a larger trend. It’s a shorter-term period of the movement against the larger trend, which is then followed by a return to the original trend.

Bullish reversal candlestick patterns are used to predict the reversal of the current downtrend in crypto. When a trader spots these candlestick patterns, it’s an alert that the crypto market may begin a rally. As we’ve seen over the past decade, crypto rallies can continue for a long time. Bullish reversal patterns are important to help traders catch the rallies as soon as possible. 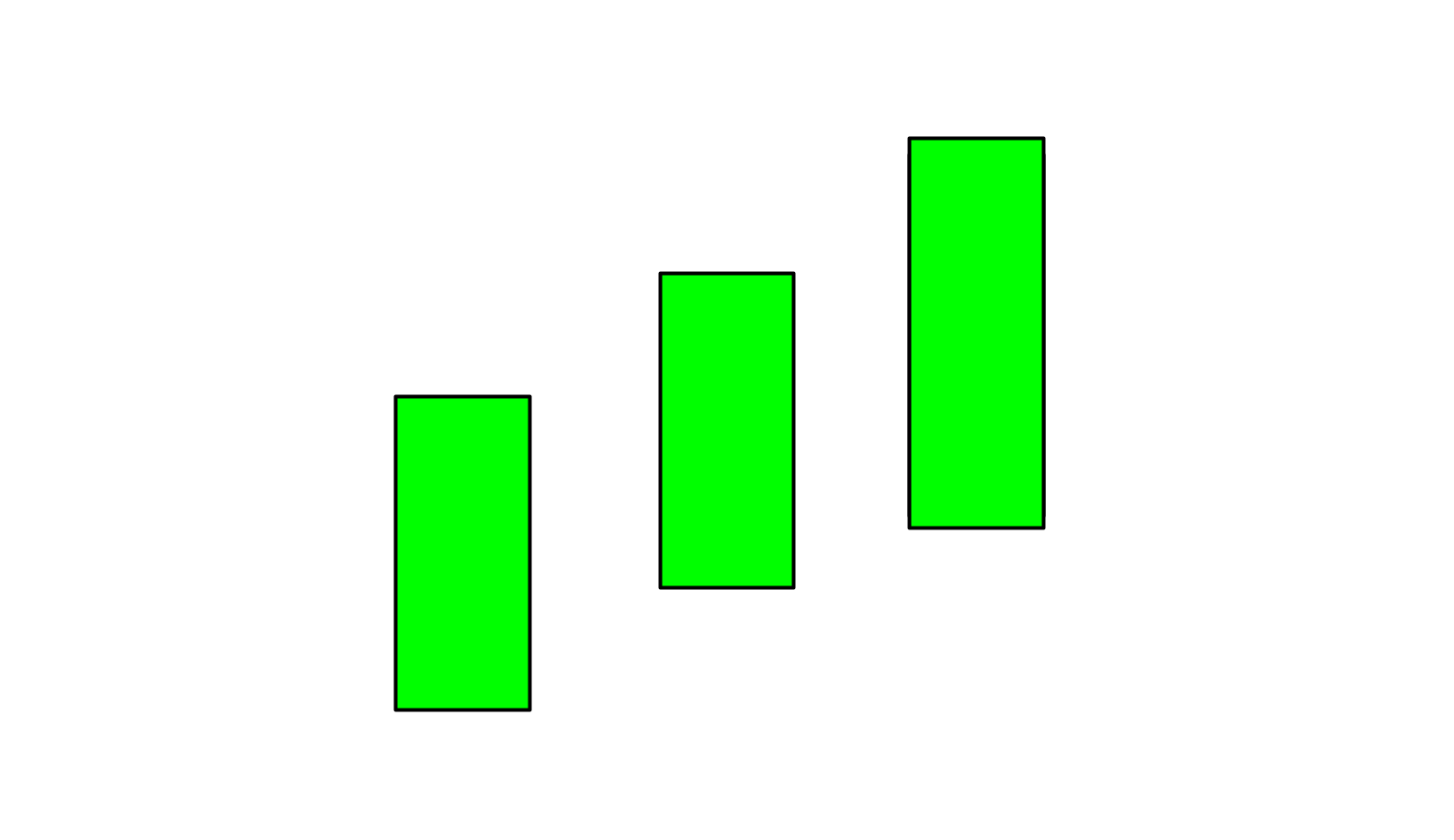 As the name implies, the three white soldiers is a pattern that consists of three consecutive long-bodied candlesticks which open within the previous candle’s body, and close above the previous candle’s high. The wicks (or shadows) should be relatively small, which implies the market has rallied continuously through each candle’s duration with minimal setback.

In essence, the bulls take over the rally and close near the high of the candle for three sessions in a row. Any expansion on volume accompanying the three white soldiers lends additional strength to the signal. 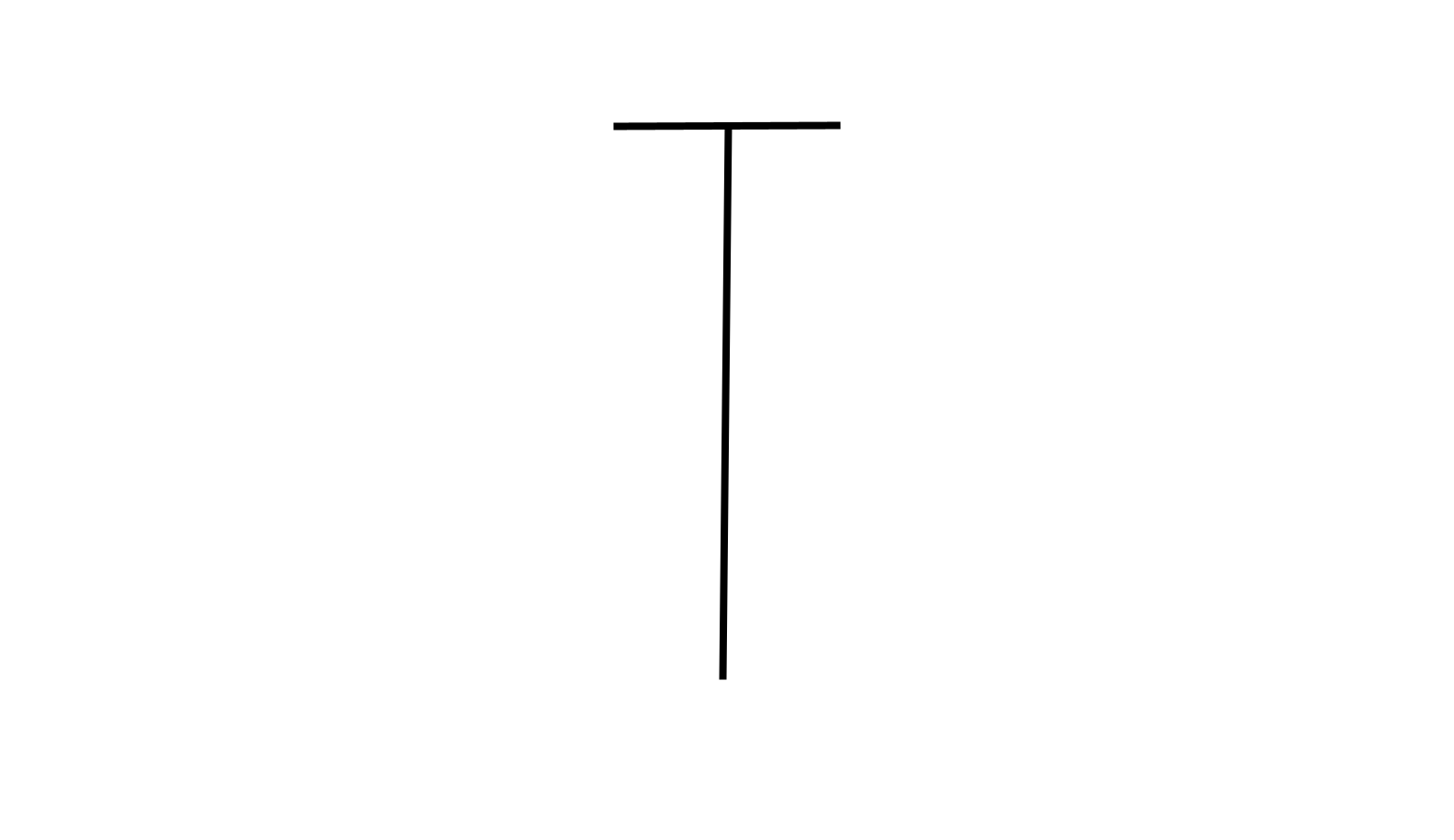 The dragonfly doji is a special type of doji pattern in which the high, open and close prices are all the same. The candle ends up with a tall lower tail or shadow, with no body. This pattern’s shape resembles a dragonfly, and is easy to spot on charts.

This is a powerful bullish signal. The dragonfly doji suggests the lower-trading market has immediately rebounded, closing at the same price as the open. 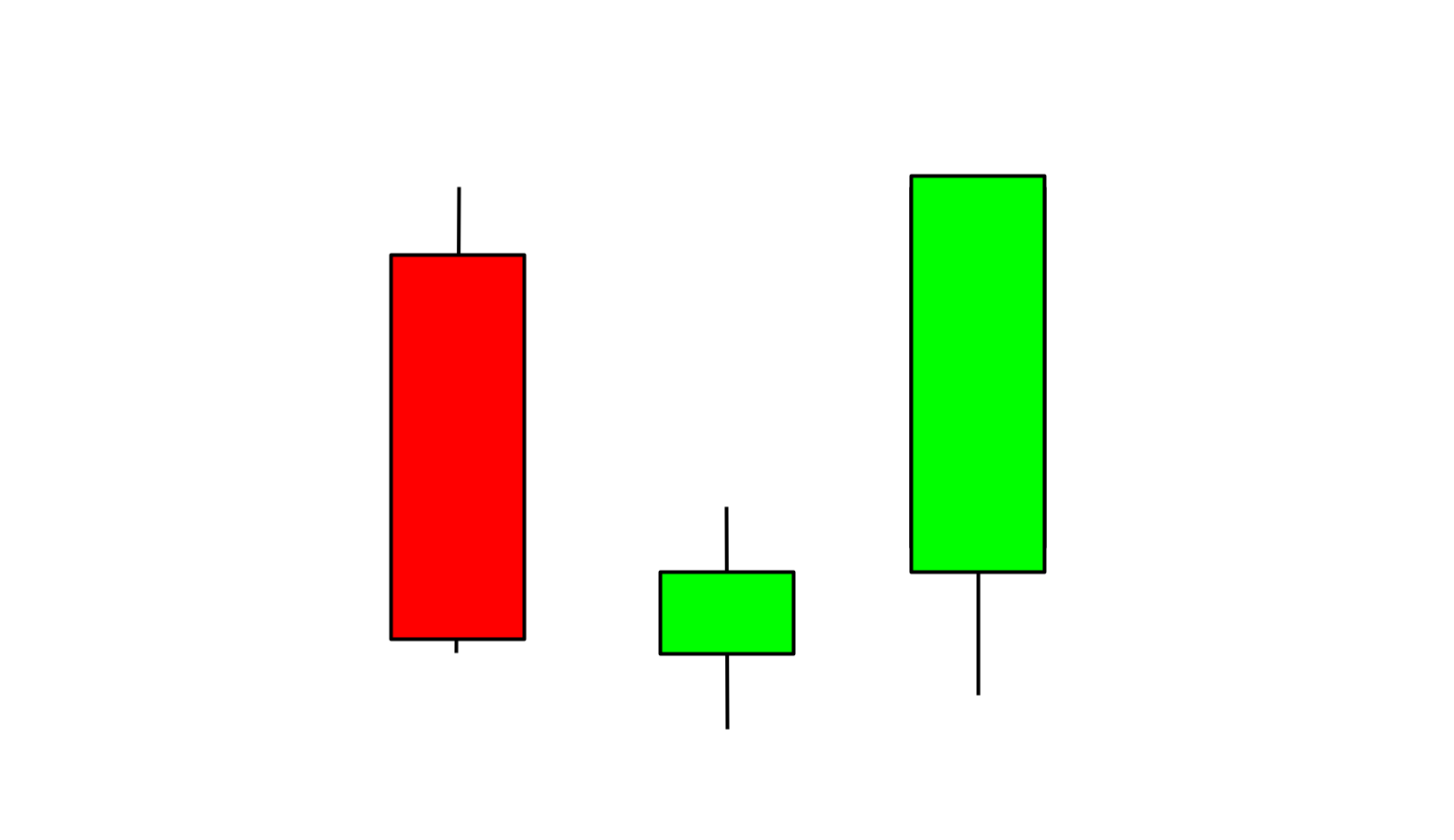 The pattern gets its name because the second candle represents the sun coming up from below the horizon. 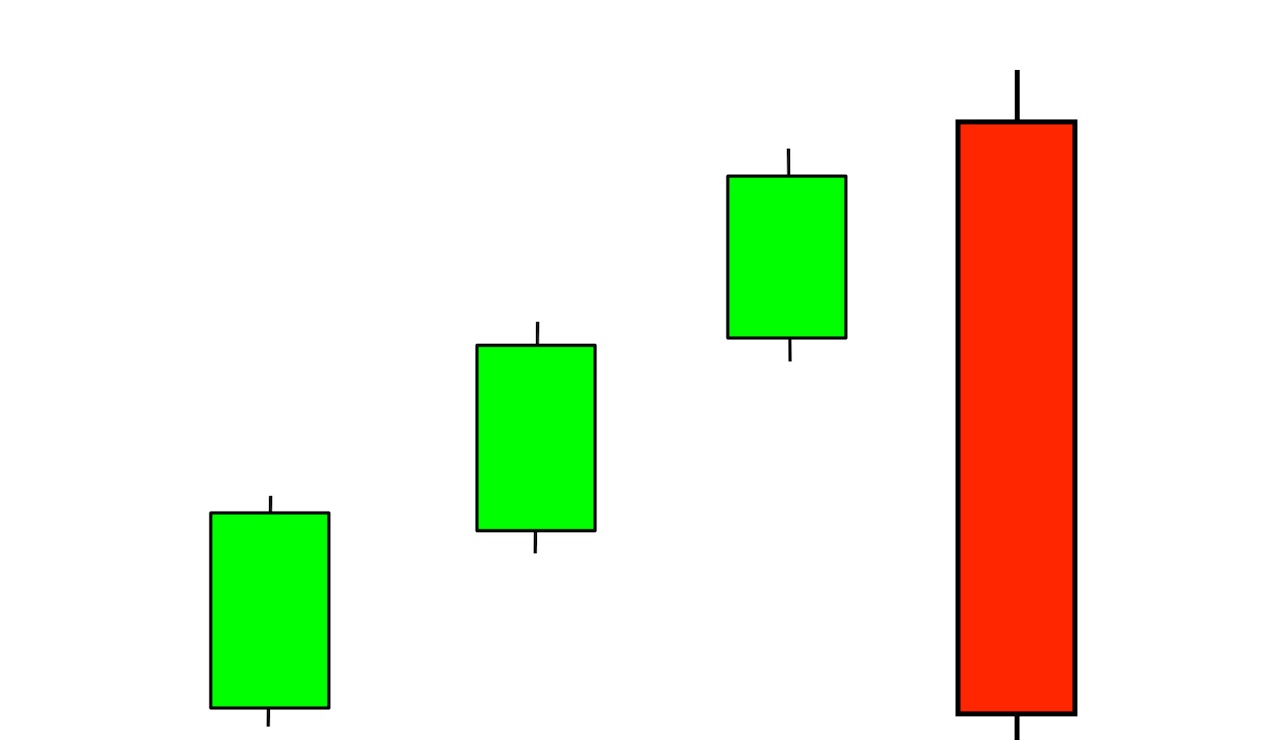 The three-line strike is a four candlestick formation where the first three candles are bullish while the last one is bearish. Each of the three bullish candles progressively closes higher, followed by a final strike down.

The strike candle is bearish, and closes below the opening of the first candle. This pattern is effective when prices have been trending higher. The correction on the last candle offers traders an opportunity to enter on a dip. 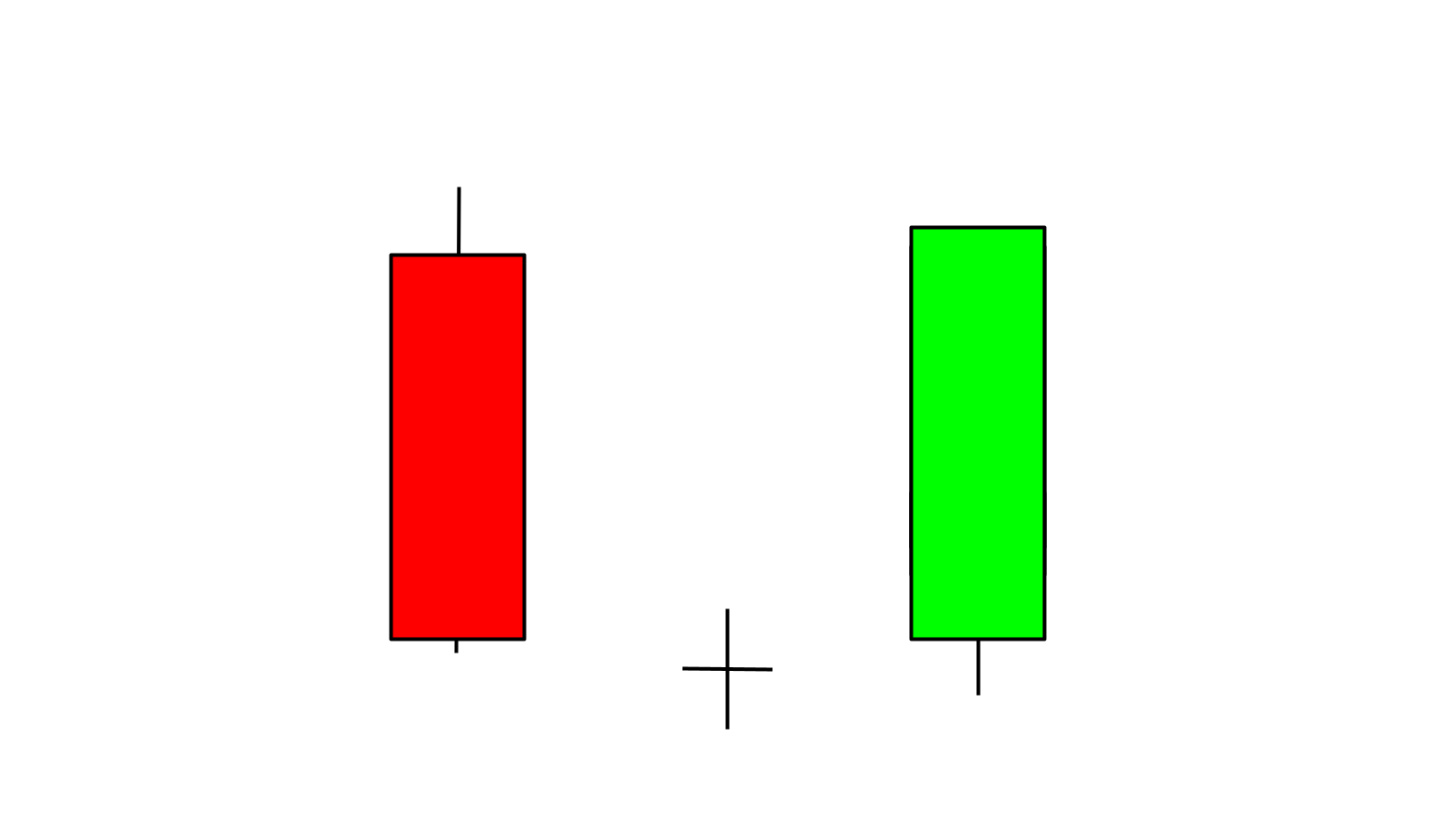 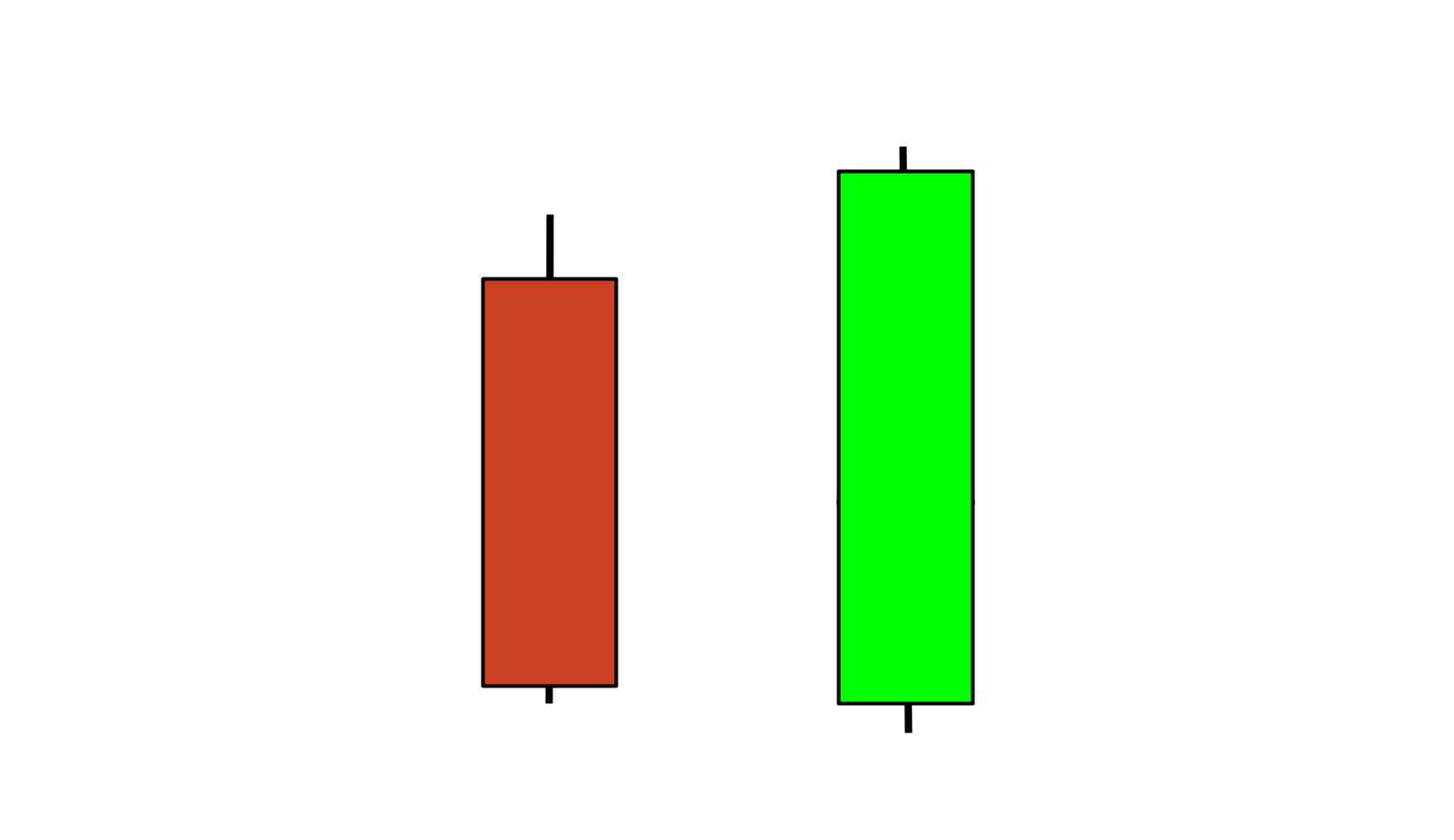 This is a powerful formation because the market touches a new low, but only briefly, and rallies above the opening of the pattern. 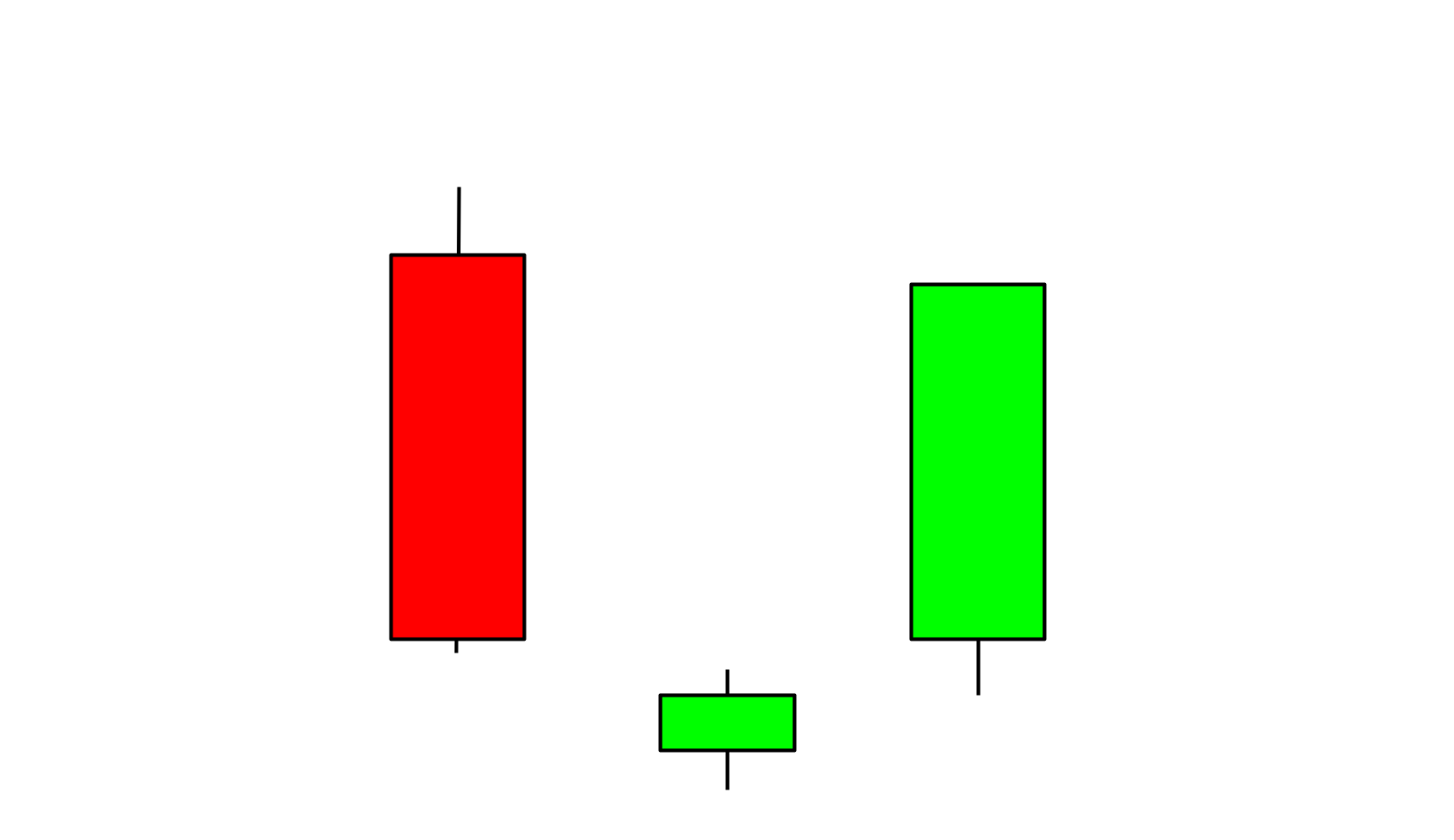 The bullish abandoned baby formation is a three-candlestick pattern, with the first candle large and bearish. The second candle has a small body, and the third candle is green.

The abandoned baby resembles the morning star patterm, but is unique because the second candle gaps below the lower wick of the first candle. Additionally, the third candle gaps above the second one. 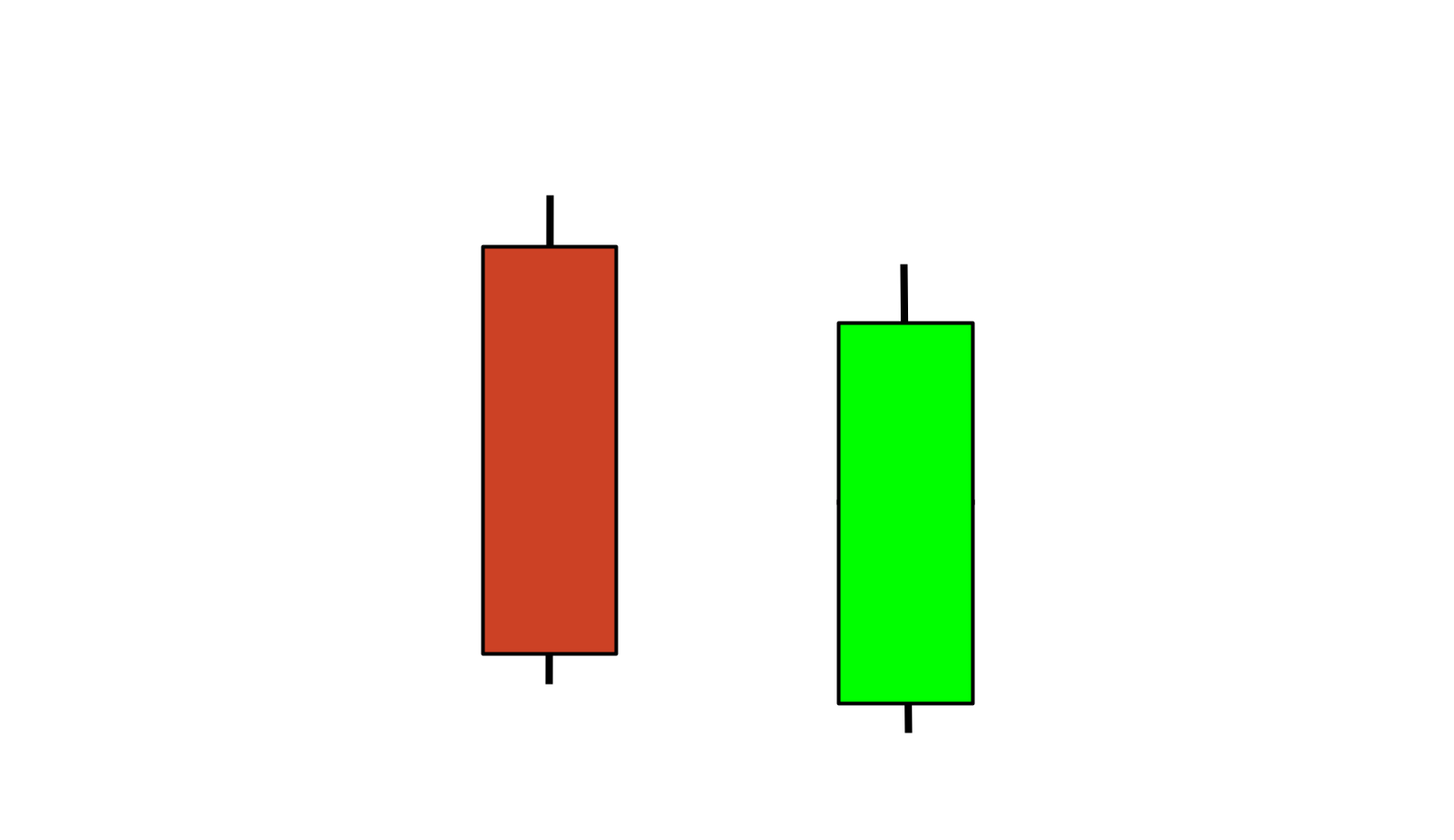 The piercing line pattern involves two candlesticks. The first candle is bearish, with an average or larger-sized body. The second candle is bullish.

The key to this pattern is that the second candle punches a new low, and closes in the upper half of the body in the first candle. This behavior suggests the market has traded to a new low, but is beginning to rally. 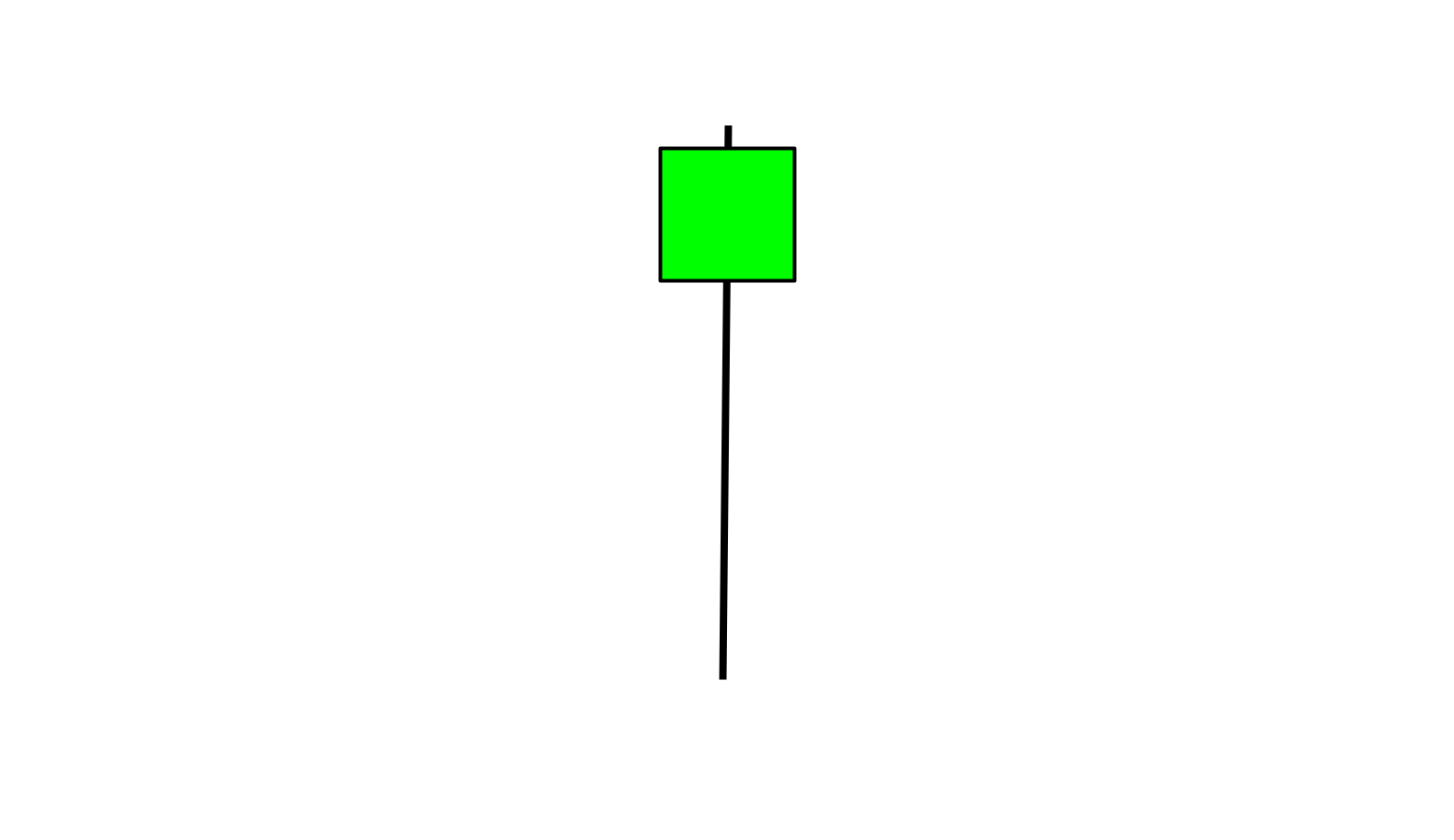 A hammer pattern is a single candlestick formation, making it very easy to spot on crypto charts. The hammer contains a relatively small body, but leaves a long tail (wick) to the bottom.

The color of the hammer can be green or red, but the long wick to the downside hints at a rally forming. This occurs because the market has traded significantly lower, but only briefly, as prices rally back up to near the opening. 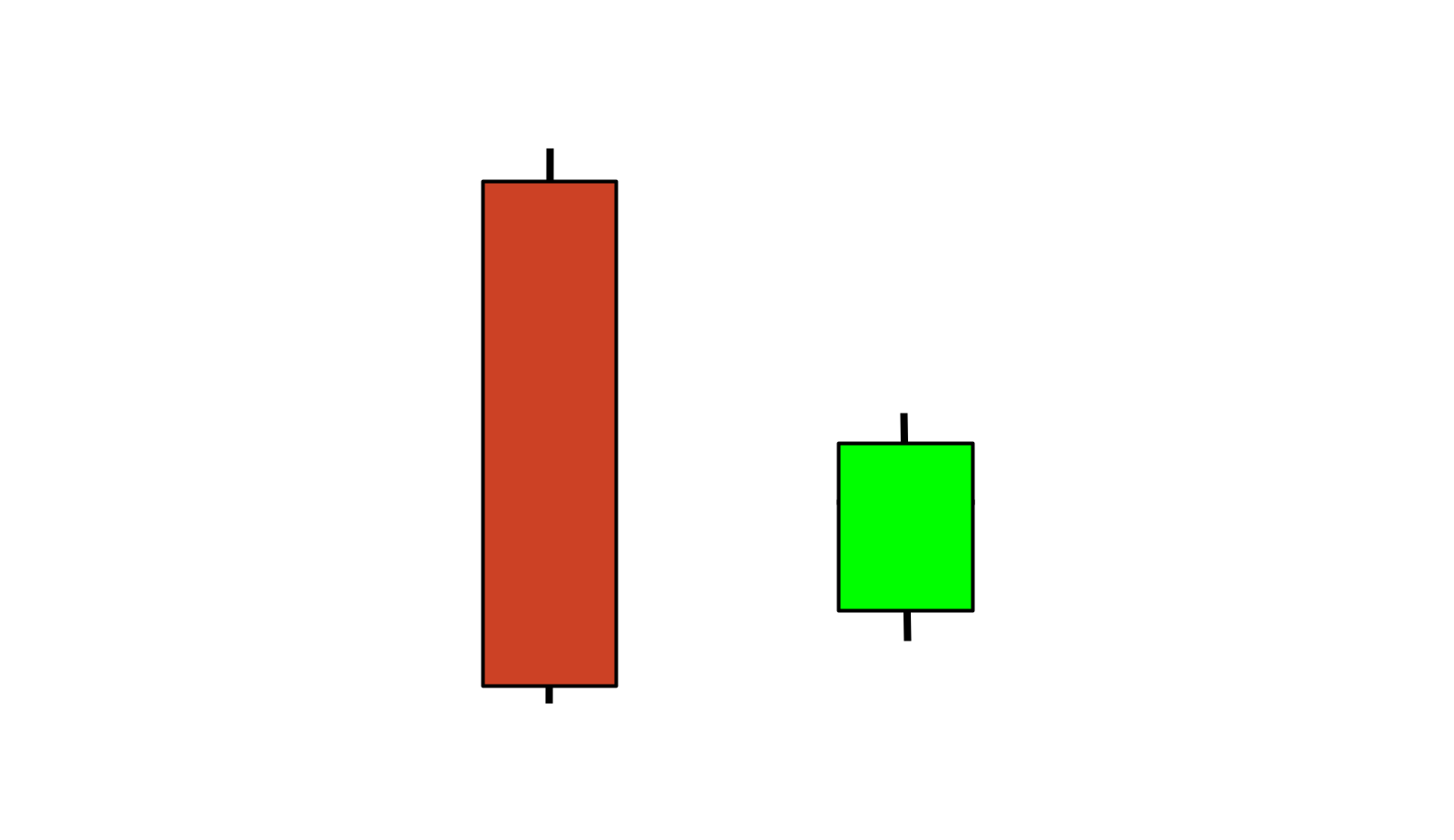 A bullish harami consists of two candlesticks. The first candle is large and bearish, and the second is a small green candle. What makes this formation unique is that after the first bearish candle forms, the second candle will move higher, but with a small body.

At first, this formation may look like a consolidation, but in reality, it’s suggesting the sentiment of the trend is shifting from significantly lower to higher. 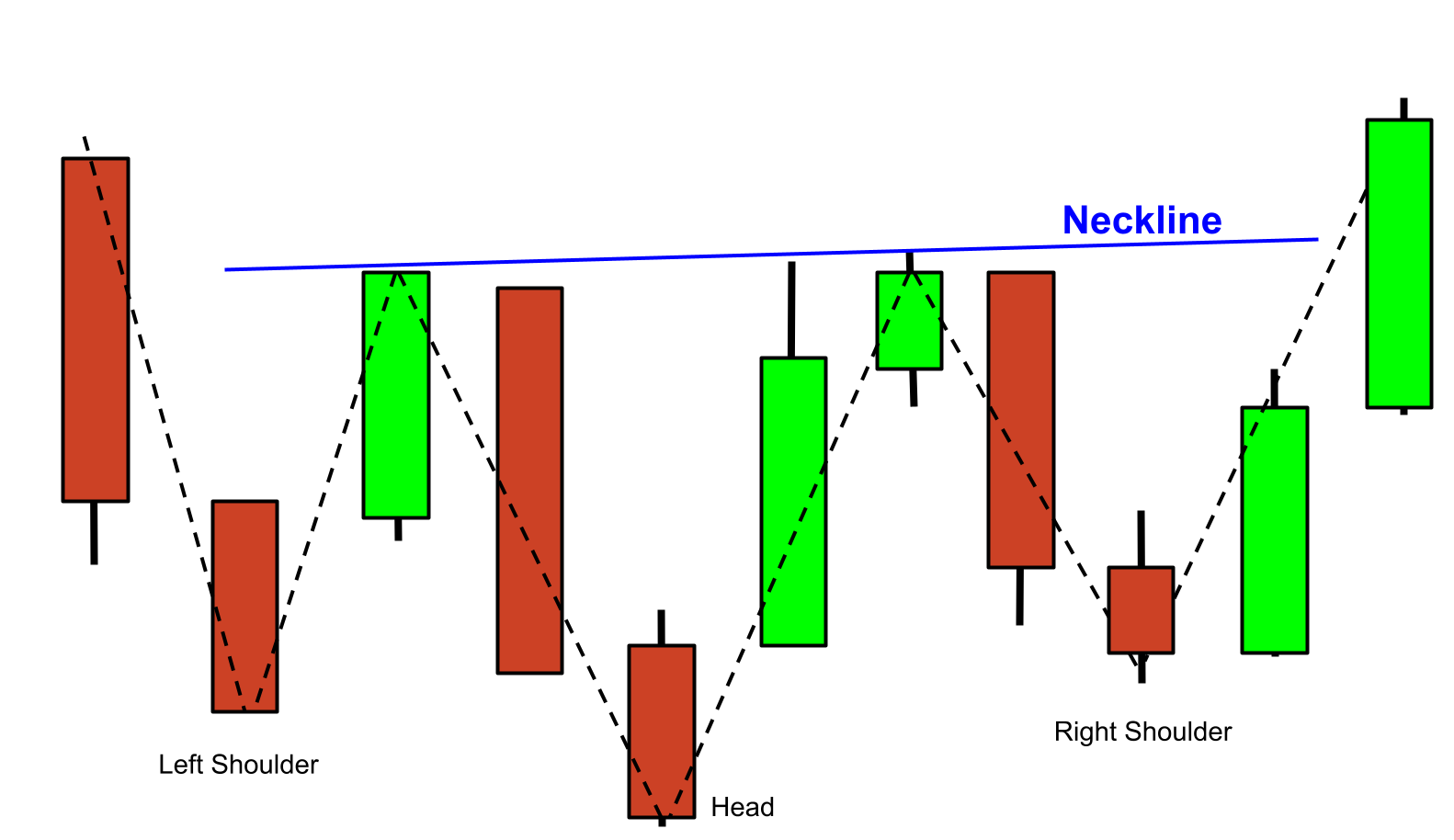 Inverse head and shoulders is a multiple candle bottoming pattern. The first portion of the pattern forms the left shoulder, as prices fall to a new low. A brief relief rally begins, retracing a small portion of the downtrend.

Then, another trend lower forms the head and pushes below the left shoulder’s low. This trend lower is relieved by another rally that stalls near the price point of the first relief rally. These two points create the neckline.

The market then corrects lower one more time, creating the right shoulder, which holds above the price low of the head.

Due to the length of time it takes to create this bottoming process, this pattern can lead to powerful rallies.

When a bearish reversal is at hand, traders may want to consider closing out long positions, possibly moving up their stop losses, or initiating some short positions. 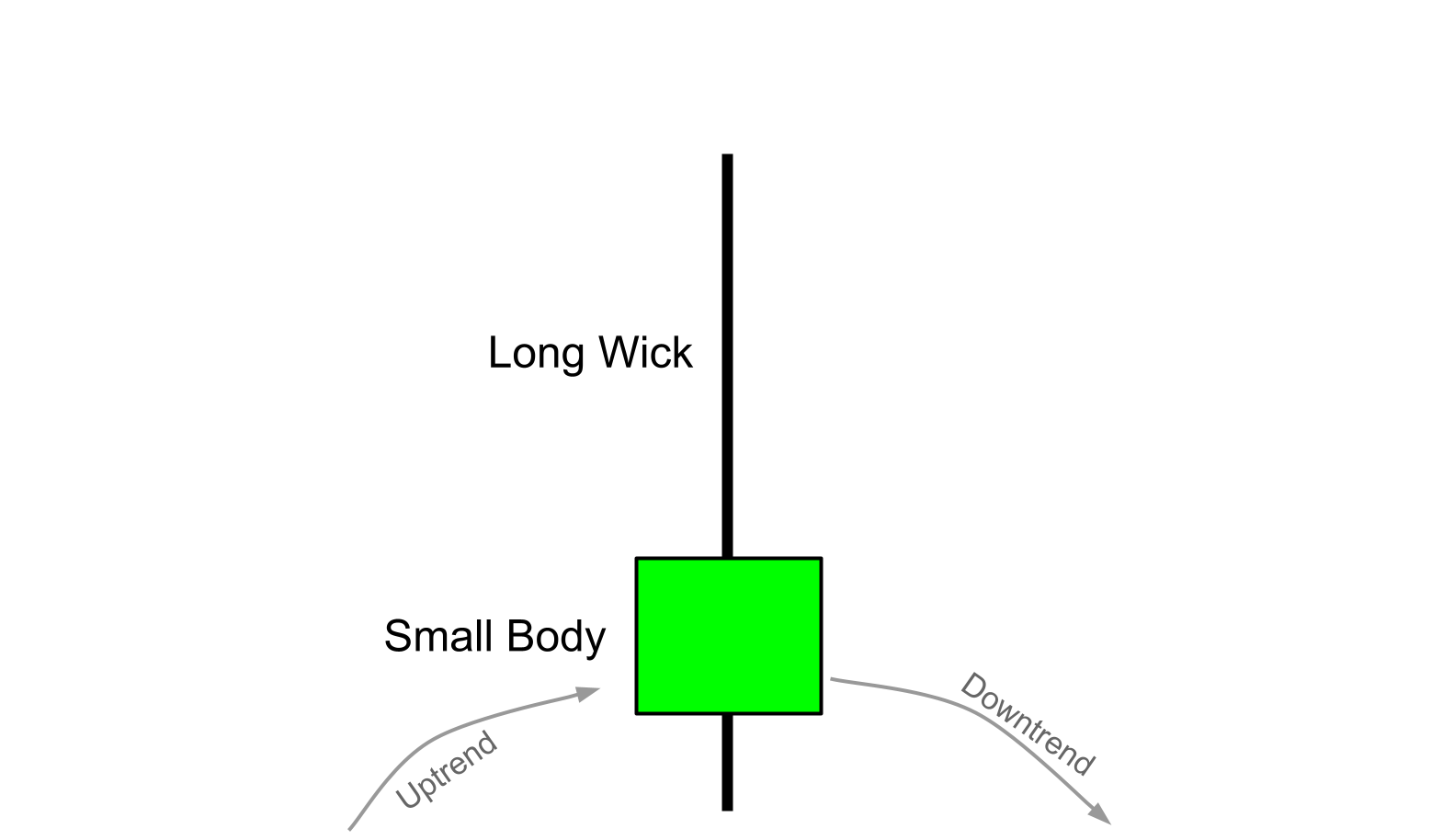 A shooting star is a single candle pattern which appears at the end of an uptrend. This candle contains a small body with a long wick to the upside.

This formation is the result of prices rallying to new highs at the opening of the candle. Then, prices reverse, back to near where the candle opened. The long topside wick suggests there’s a strong batch of sellers as the market trades higher, but not for very long. 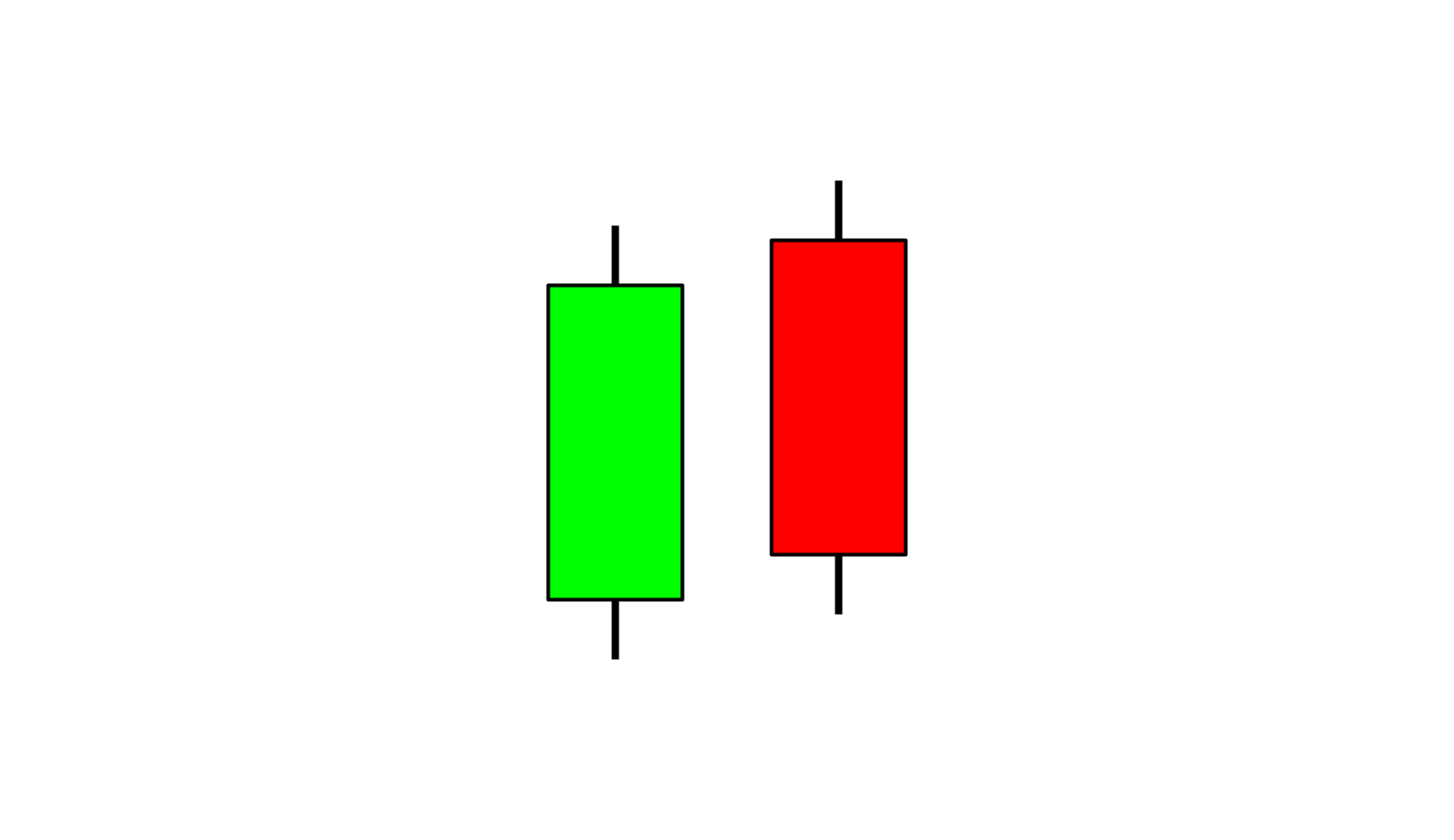 The bullish version of the dark cloud cover is the piercing line pattern (see above). 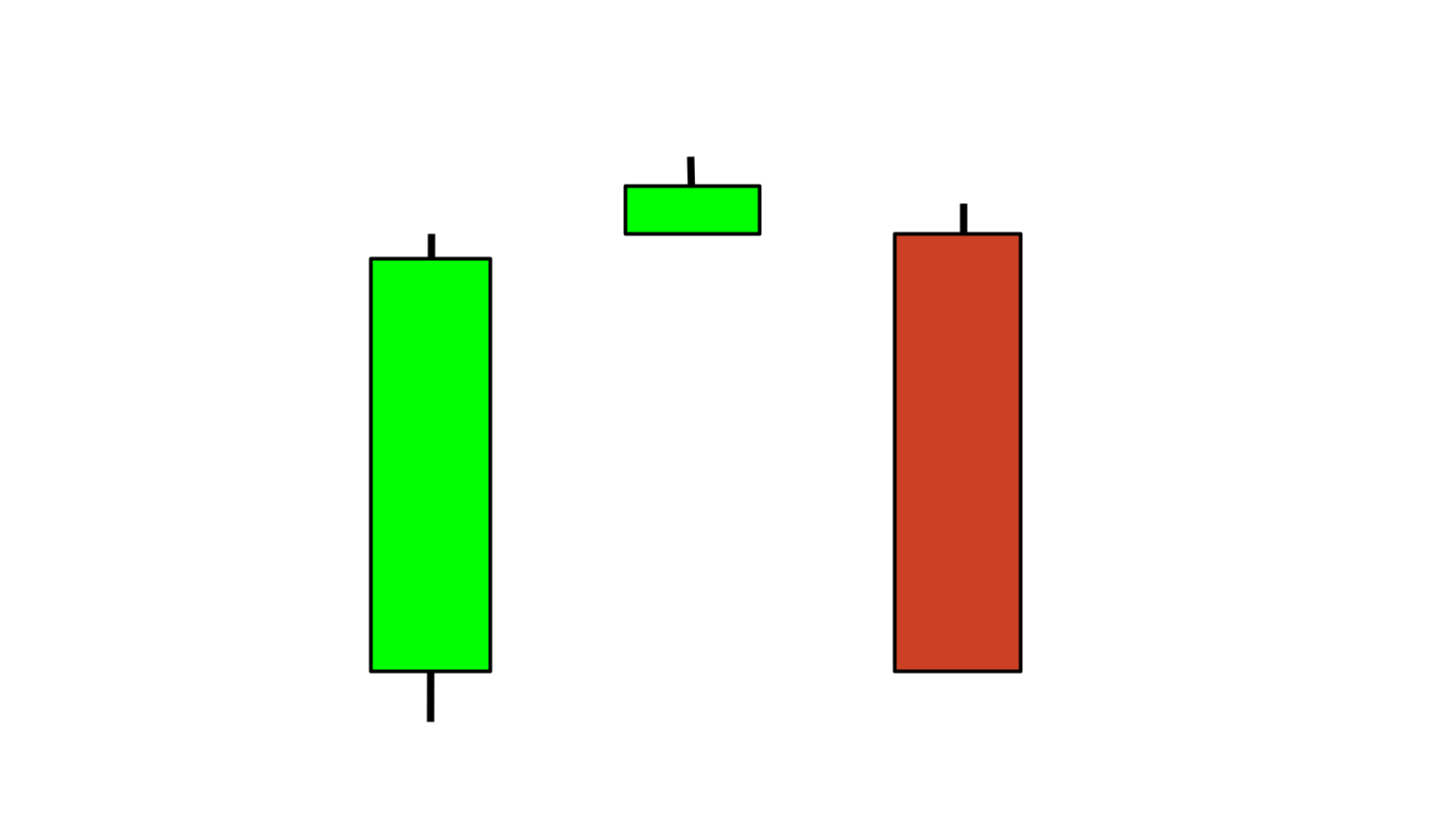 The evening star is a three-candle pattern that points to a deeper correction. The first candle is bullish, with an average or larger-sized body. The second candle continues the rally but then stalls, leaving a relatively small-bodied pattern. The third candle falls back toward the opening of the first candle.

As this pattern requires three candles to form, it’s more conservative, since more data is required to complete the formation. The bullish version of this pattern is the morning star. 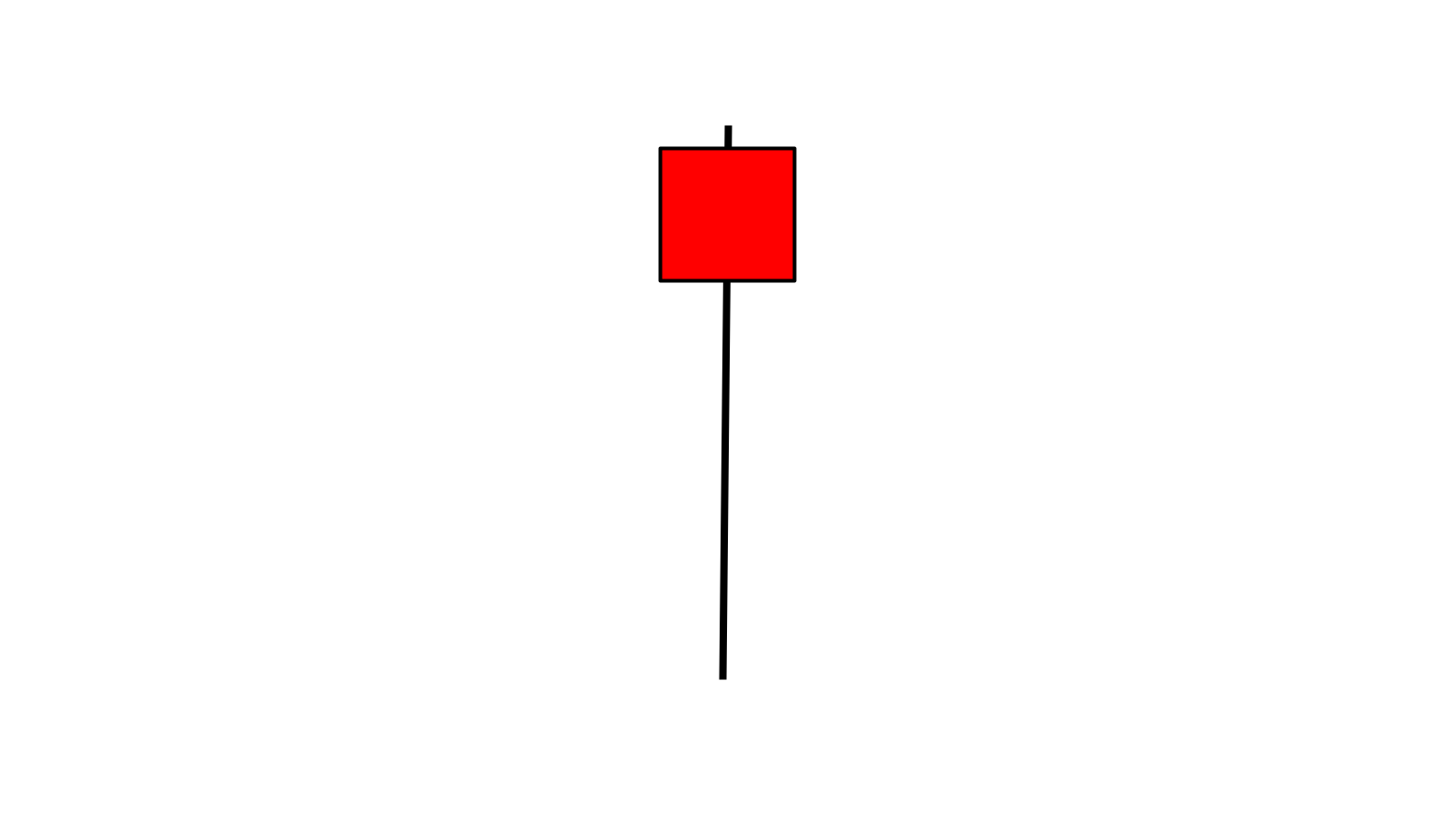 The hanging man is a single candle pattern with a small body at the top and a long wick at the bottom. The color of the candle’s body can be either red or green.

The hanging man looks like a hammer, as its opening and closing prices remain close with a long downside wick. The distinguishing factor is the location of this pattern. When it appears at the end of an uptrend, then it’s considered a bearish pattern, suggesting lower prices may soon begin. 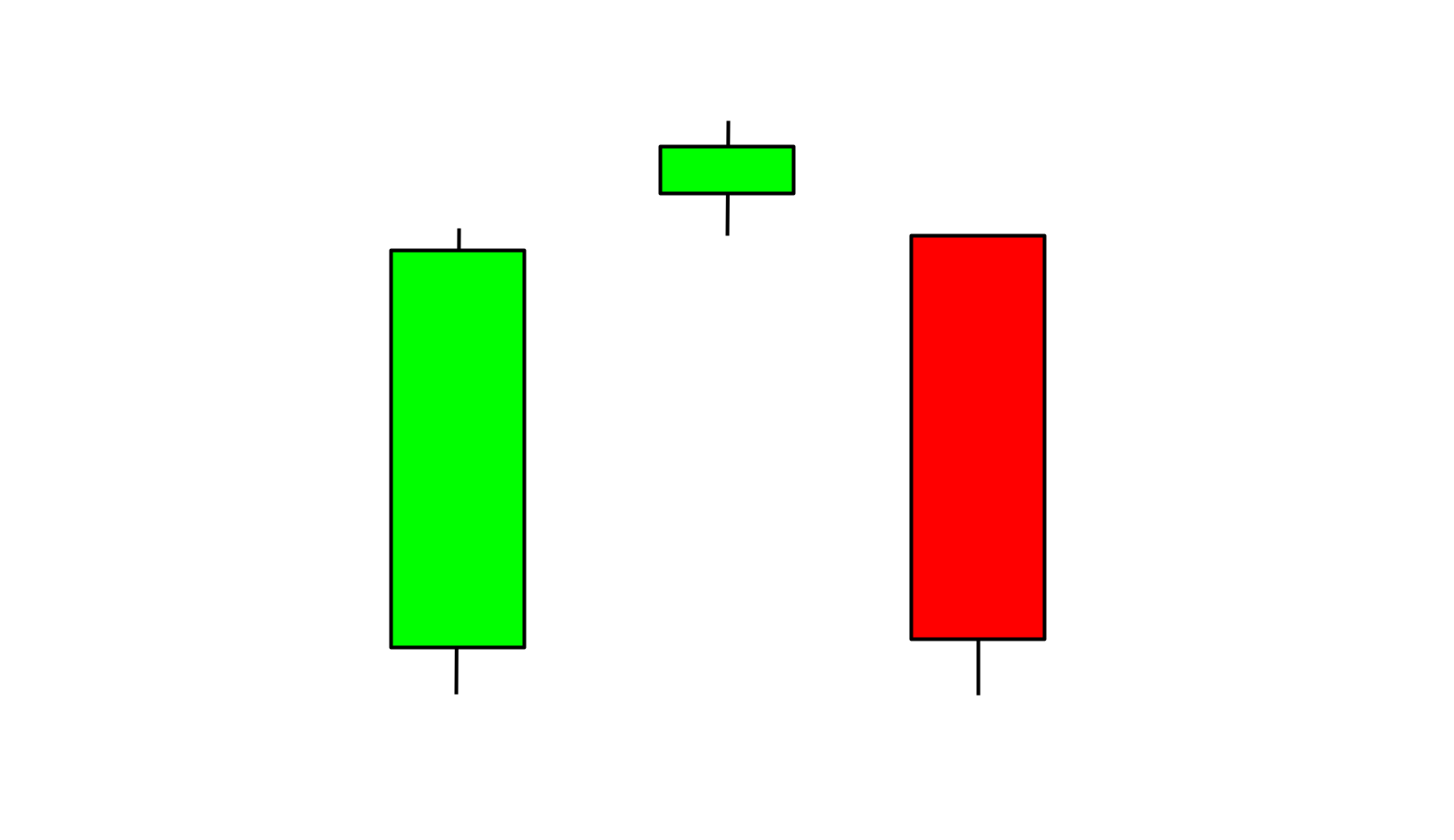 When the middle candle is forming, it typically gaps to a new high such that there’s no overlap between its lows and the previous candle’s high. This suggests a strong rally that hasn’t followed through to the upside. The third candle then retraces most of the first one. 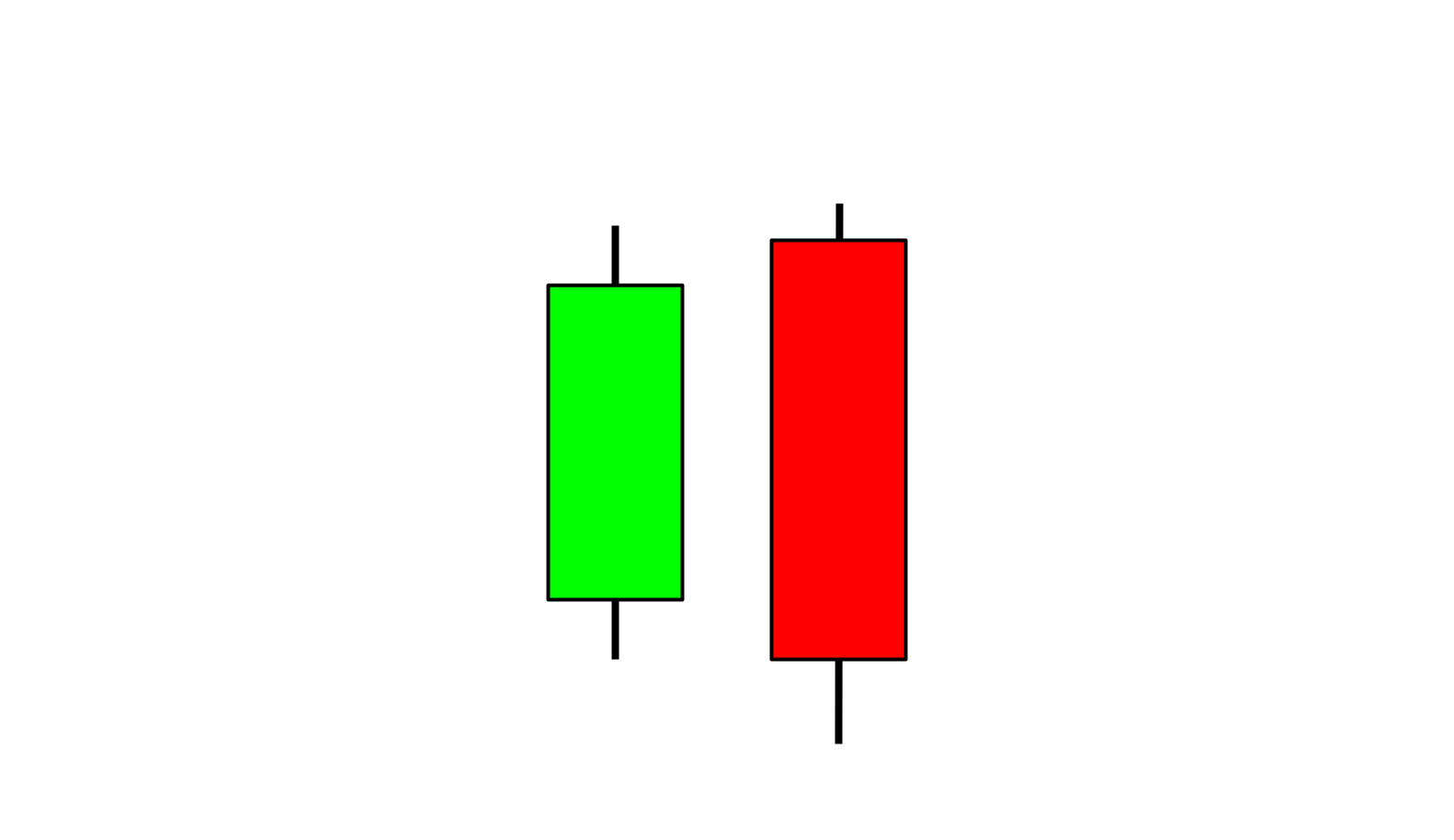 The bearish engulfing candlestick formation consists of two candles. The first is a strong bullish candle in an already existing rally. The next candle starts to rally some more, pushing to a new high, but then reverses, closing below the opening of the first candle.

As a result, the body of the second candle engulfs the body of the first candle, giving the pattern its name. This formation is a common pattern which provides a big clue about a potential bearish reversal. 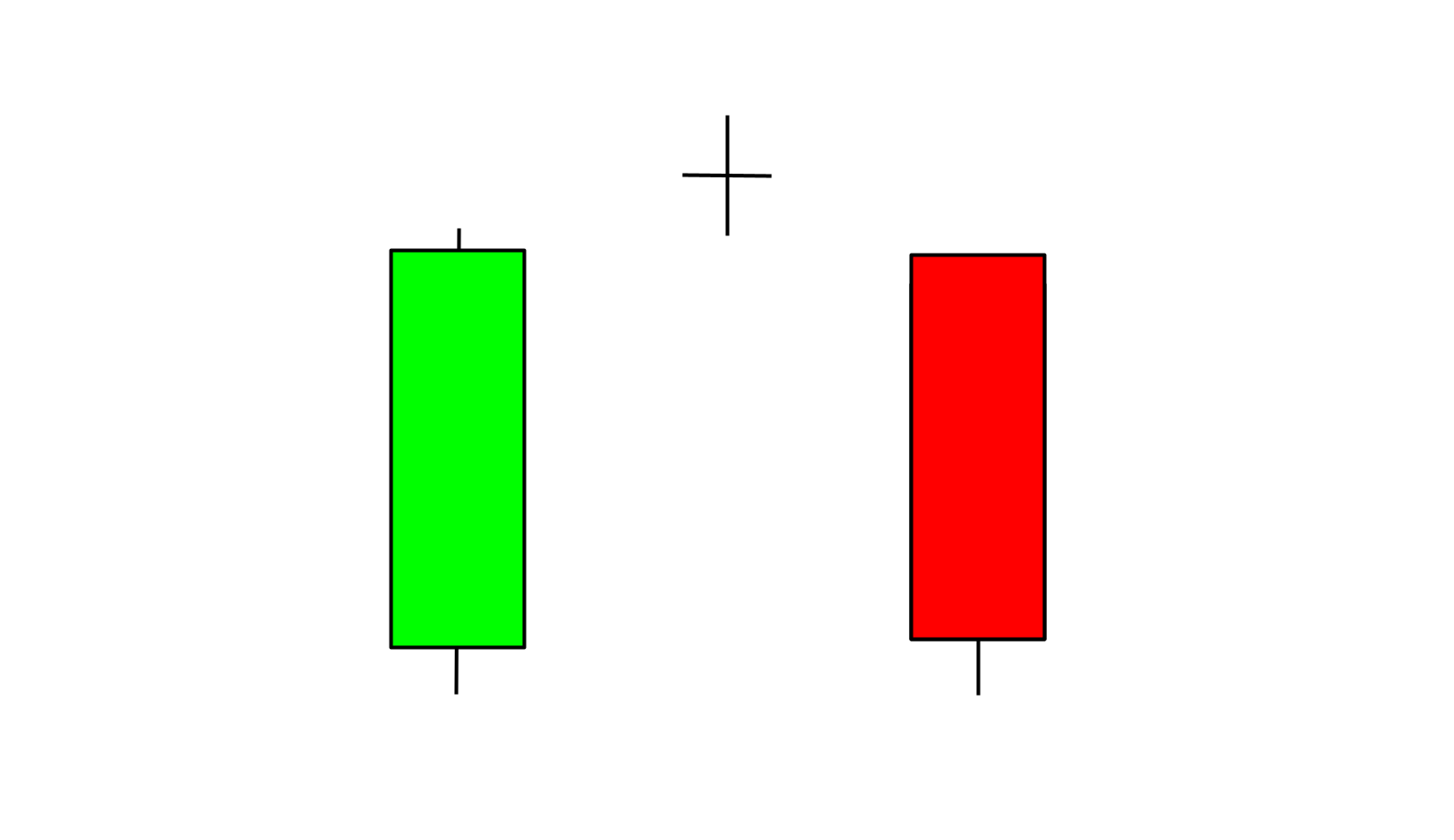 The evening doji star is a specialized formation of the evening star pattern. What makes this version special is that the second of the three candles in the pattern is a doji, which represents indecision after a long uptrend. This indecisiveness suggests the rally is losing momentum.

The pattern is completed when the third candle falls back to the open of the first candle, suggesting a deeper correction may be underway. 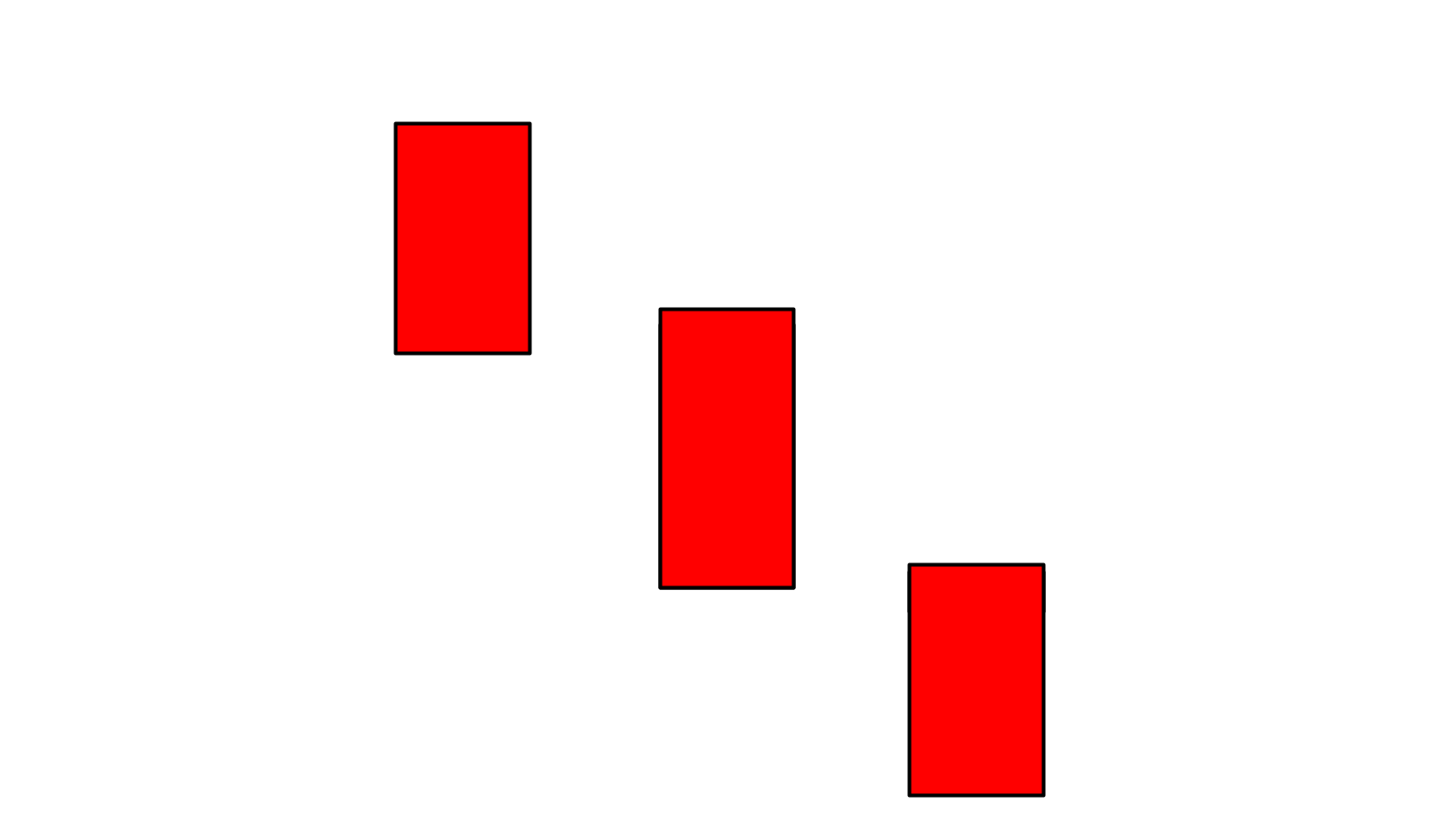 Three black crows is a bearish pattern requiring three downward candlesticks. The bearish candles are generally painted black, or sometimes red. The pattern gets its name from the three bearish black candles on the chart.

Each of the three candles has a minimal wick or tail, suggesting that the price has opened near the high and closed near the low. Such a pattern is typically a strong beginning to an even larger correction.

What to Do When Reversal Candle Formations Appear

When a reversal candle formation is spotted, the trader needs to consider the strength of the signal. If the signal is strong, there are generally three options available.

First, if the trader is in a position following the direction of the old trend, they can exit all of their position.

Secondly, if the trader believes the reversal signal isn’t that strong, they may consider tightening the stop loss on their trade, or closing out a portion of their position to lock in profits.

Thirdly, if they’re flat in the market, they can use the signal to enter into a new position in the direction of the reversal. For example, if a bullish reversal pattern appears, then they can consider opening a new bullish position.

Following are some guidelines for traders planning to initiate a new position in the direction of a changing trend.

Most patterns are single, dual or three-candlestick patterns. Regardless of the number of candles, when the pattern completes, the trader can enter a position in the direction of the reversal on the opening of the next candle.

This allows the trader to enter into the position right away without the need for additional confirmation. 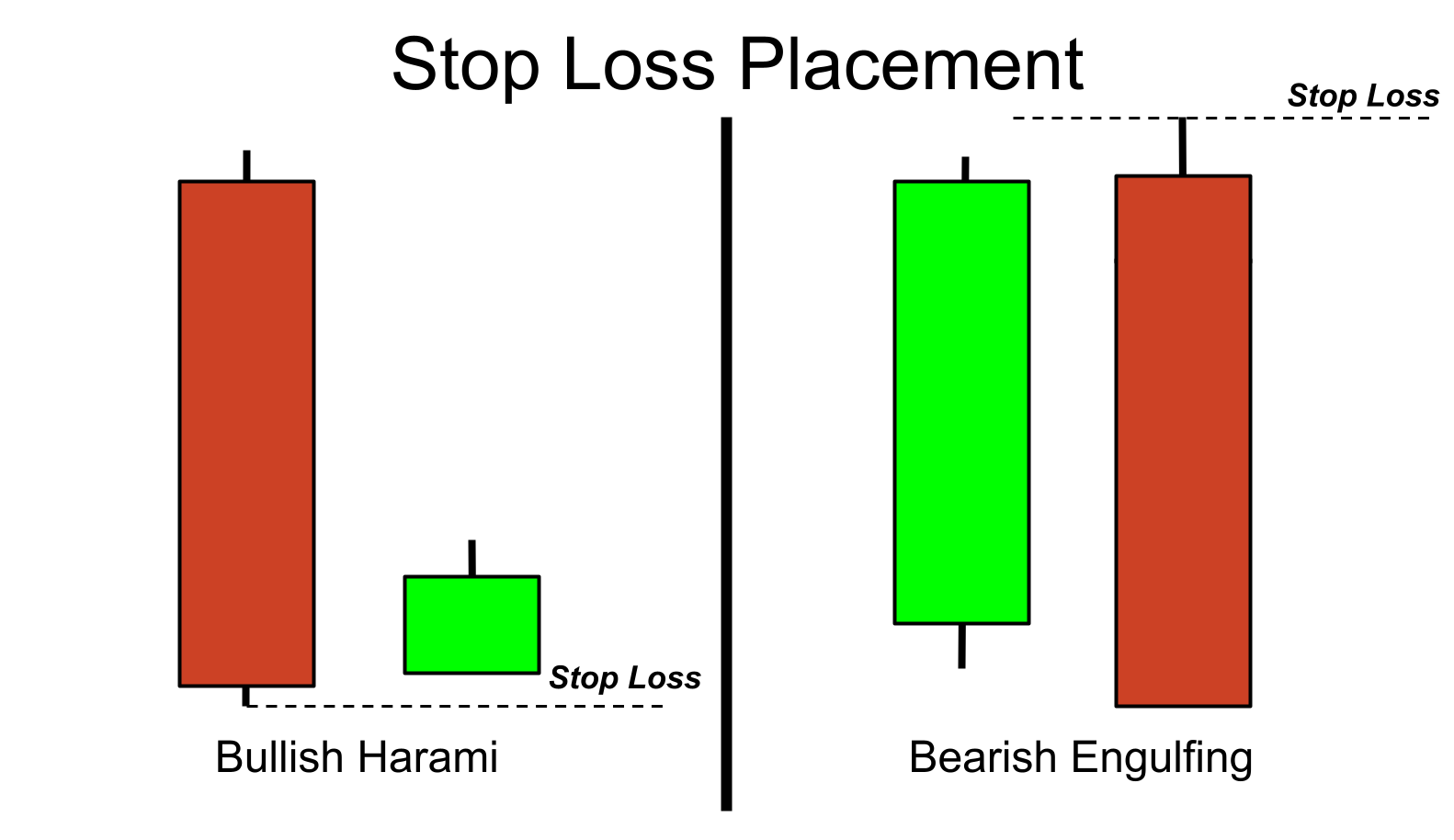 Are All Reversal Candles Reliable?

Not all patterns are 100% accurate, which is why you should always manage risk with a stop loss on every trade.

Japanese reversal candle patterns alert traders to an upcoming trend change. However, the truth is these patterns still have their limitations. That means, depending on the market you’re trading, the timeframe, and other conditions related to your overall trading strategy, the reliability of a candlestick may differ. Still, understanding the patterns could help you interpret the potential of the market more strategically and make a more informed decision. If these technical tools are applied properly, they can be quite powerful to yield a result.