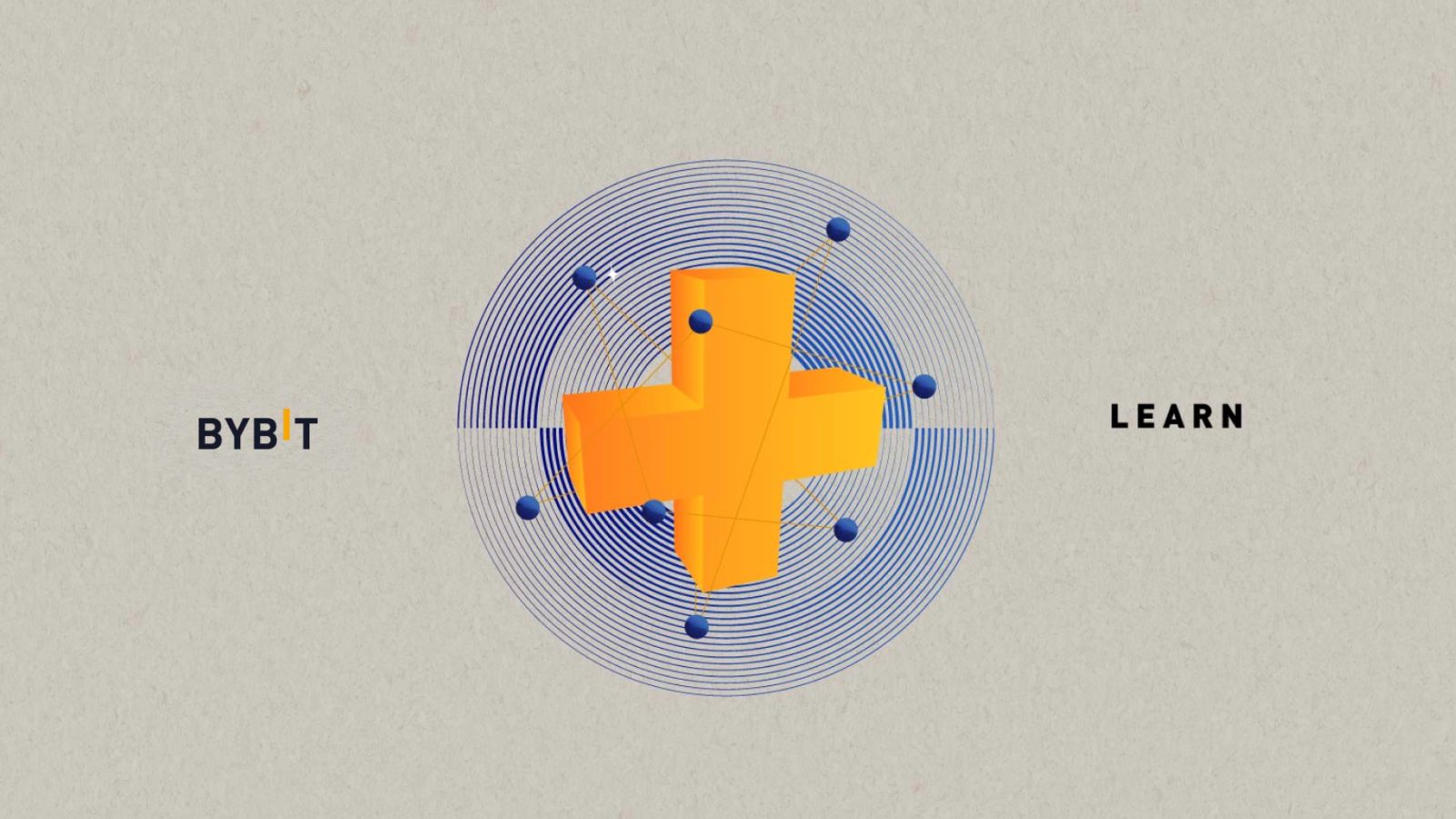 What Is a Golden Cross?

The original golden cross trading strategy has its origins in the stock market. The main components of the golden cross pattern include two moving averages:

The 200-day MA is regarded as being one of the most popular, while the 50-day MA is a leading moving average. 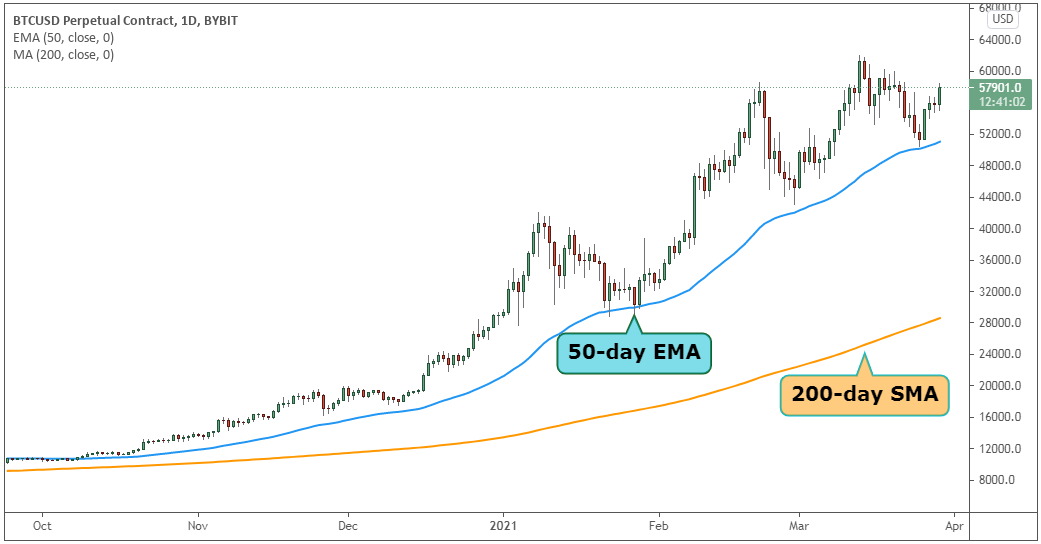 The Anatomy of a Golden Cross

Let’s start with the basics.

Moving average represents the overall market sentiment of the trading asset. When the price is trading above the moving average, the buyers are stronger than the sellers.

So, what does it mean if the price is trading above the 50 days MA?

It means bulls have been controlling the market for the last 50 days. So, in this market condition, traders who focus on buy trades have a higher chance of making a profit.

A sharp movement toward the upside!

There are three stages of a golden cross: 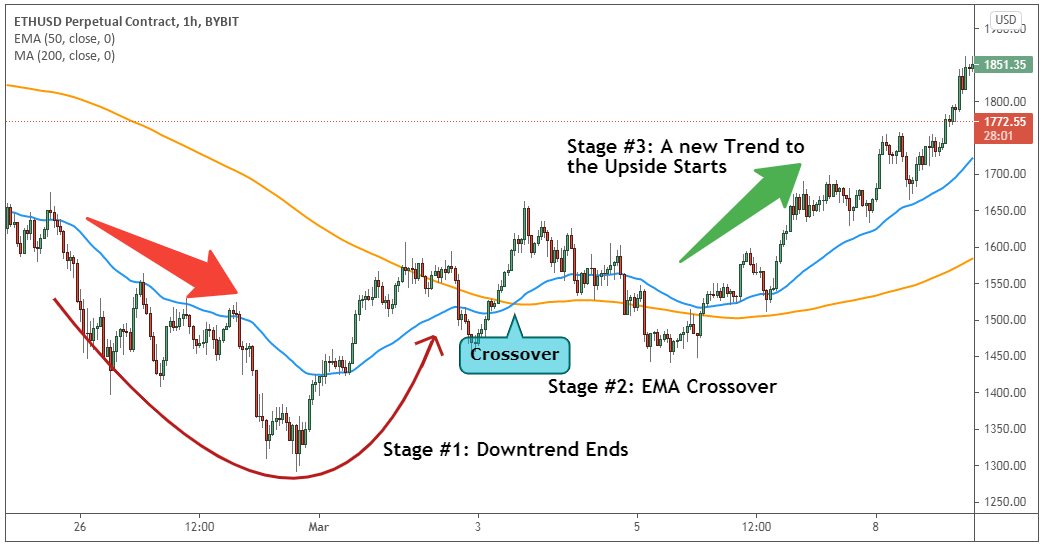 How to Use a Golden Cross

Trading is more practical than having only theoretical knowledge. If you want to get the maximum output from the golden cross, you need to make sure that you are using it perfectly.

But, how to use the golden cross?

At first, you have to ensure that the crossover happens and a candle closes above the crossover. Later on, you’ll want to focus on building a trading strategy with an appropriate stop loss and take profit levels.

There are many trading strategies based on the golden cross, and you can make a decent profit from any of these.

In the golden cross, the more effective moving average values are the 50 EMA and 200 SMA. Before proceeding to the trading strategy, let’s look at the key difference between SMA and EMA:

Identifying the 50 EMA and 200 SMA crossovers is very simple. We can see the Bitcoin hourly chart in the image below, where the 200 SMA is represented by the orange color and 50 EMA by the light blue color. 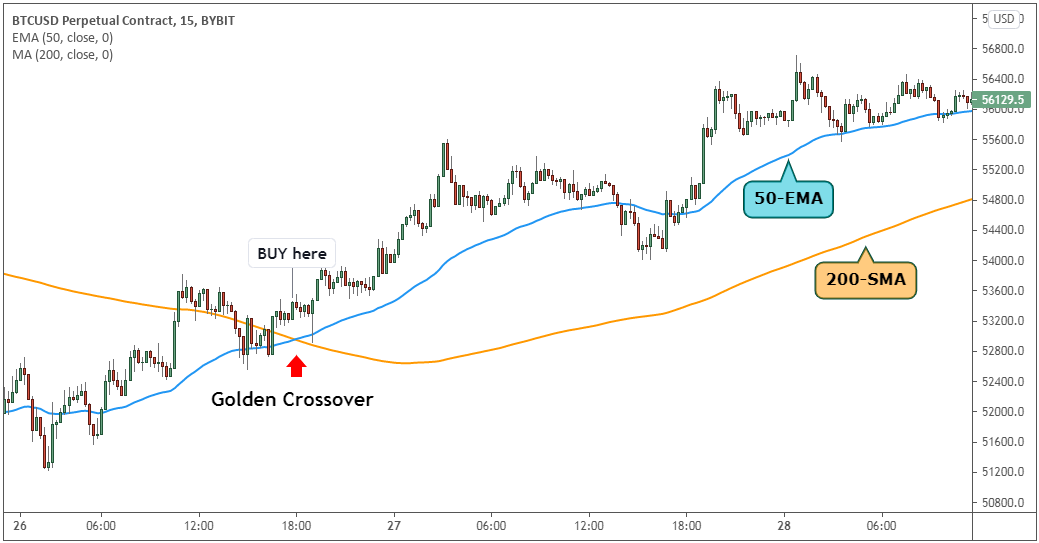 Here, we can see how the price moves up with a strong bullish pressure as soon as the 50 EMA moves above the 200 SMA.

Taking trades based solely on the crossover might not be suitable every time. So what if a golden cross happens, but the price moves downward?

You might think this is a false crossover signal, but that’s not the case.

If you don’t want to miss those trades, the golden cross with a double bottom pattern strategy is for you.

What is the double bottom?

Here is an example of a double bottom pattern. 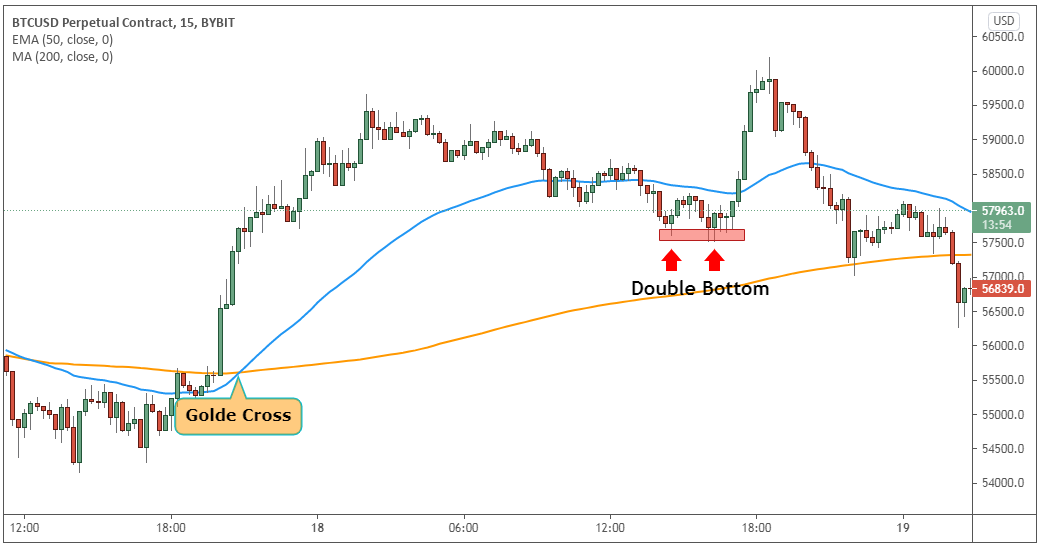 Here is how to take trades based on golden cross with Double Bottom Pattern: 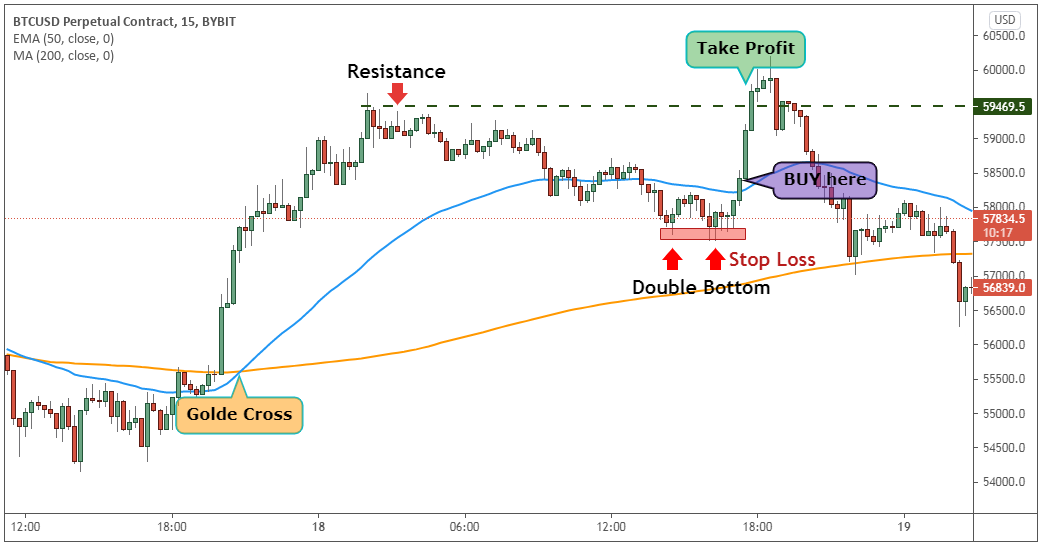 The double bottom pattern is confirmed once a candle closes above the highest point of this price structure. This also triggers our entry.

The stop loss is below the recent low, plus a buffer for extra protection, and the full profit was taken with a 1:2 risk/reward ratio.

In this case, we look for the price to find support at the 50-period EMA, which is going to stop the price from dropping further.

You can take trades from the 50 EMA carry.

When does the 50 EMA carry happen?

If the bullish pressure is strong, the price might move along with the 50 EMA instead of moving below it. It is often tricky to know whether the 50 EMA will hold the price, or not. Still, if at least two bearish rejection candles appear at the 50 EMA level, we may consider it a carry. 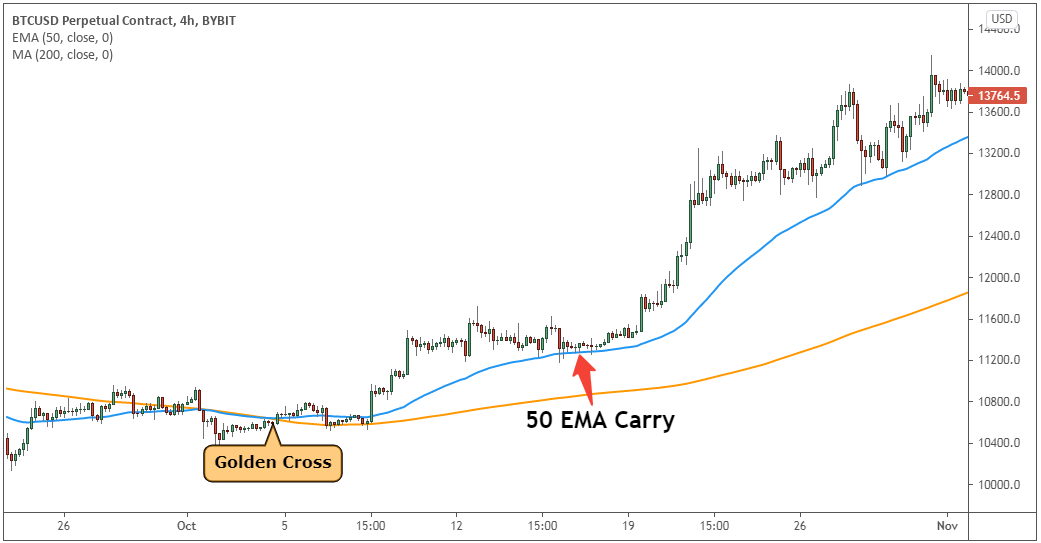 We can see that the Bitcoin golden cross happens in the above chart, and the price becomes corrective immediately afterward. Instead of moving down below the 50 EMA, it starts to stall at the 50 EMA area.

So, the 50 EMA carry happens when the price stays glued to the 50-period moving average.

How to take an entry? 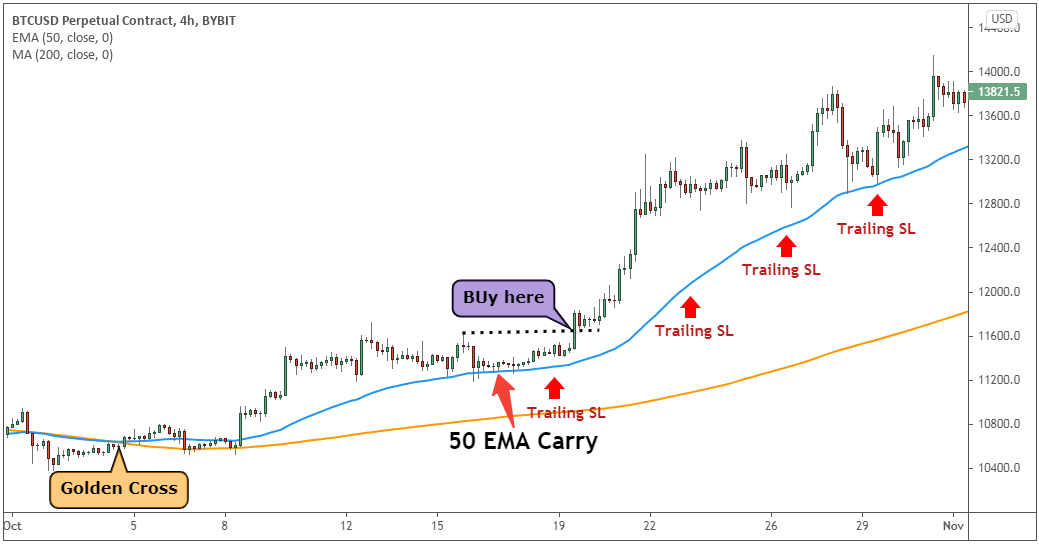 The above image is a perfect example of the 50 EMA carry trade. The trade was triggered at the first bullish candle that broke above the most recent swing high.

When the golden cross happens in the market, we may expect the bullish pressure to extend as long as the price is trading above the SMA 200.

Therefore, if you find any event level after the golden cross pattern, consider it a good buying point.

Let’s explain what an event level is.

This is why the event level is the most important static level, or zone, that traders can watch for. Both buyers and sellers are active at this level, and any trade setups from this level provide high accuracy trades. 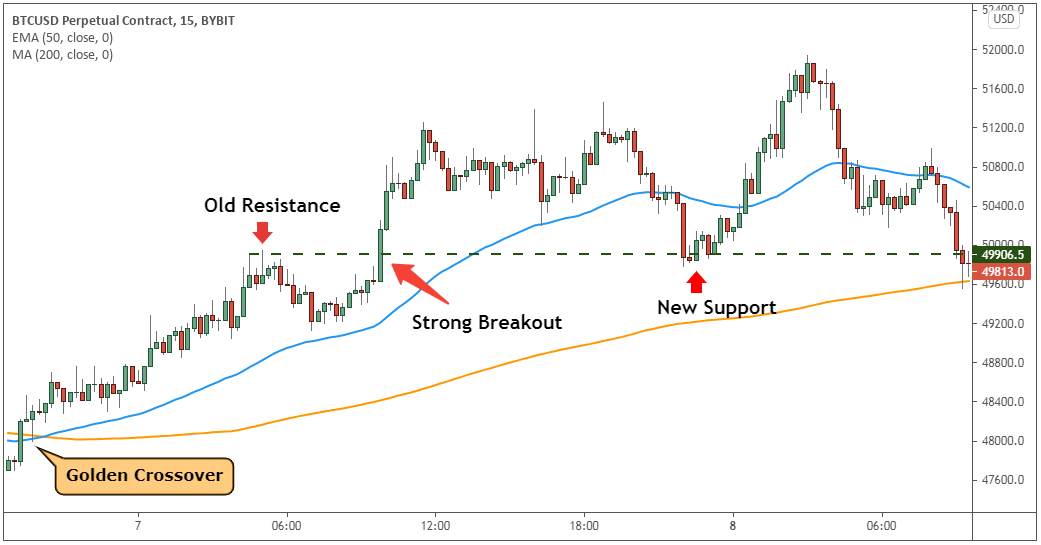 Here we can see how the event level formed, and how it worked as both support and resistance level. 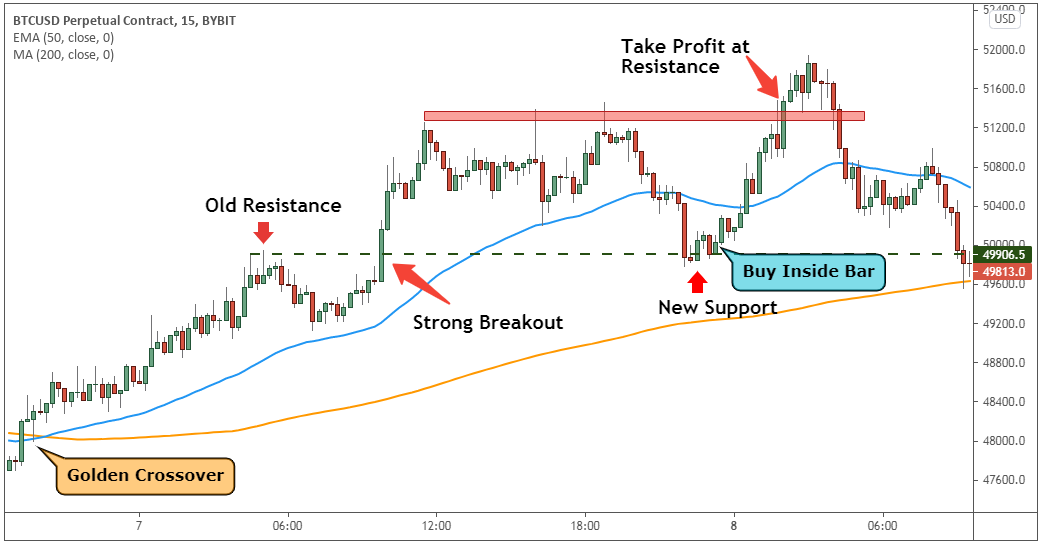 The BTCUSD chart above outlines a trade example based on the event level. In this example, the bullish entry provided a 1:3 risk/reward ratio.

All four trading strategies from the above section were trend-following strategies. In the financial market, there are both buyers and sellers at every price level. So, even if the price were to move higher after the golden cross, there is a possibility of bearish movement.

How can you benefit from it?

In this strategy, we need a sharp movement after the golden cross, and the entry point is further validated by the MACD indicator.

In technical analysis, the Moving Average Convergence Divergence (MACD) can be used in many different ways; but the MACD divergence signals are the most accurate ones. The MACD divergence happens when the price moves in one direction and the indicator’s line is moving in the other direction. 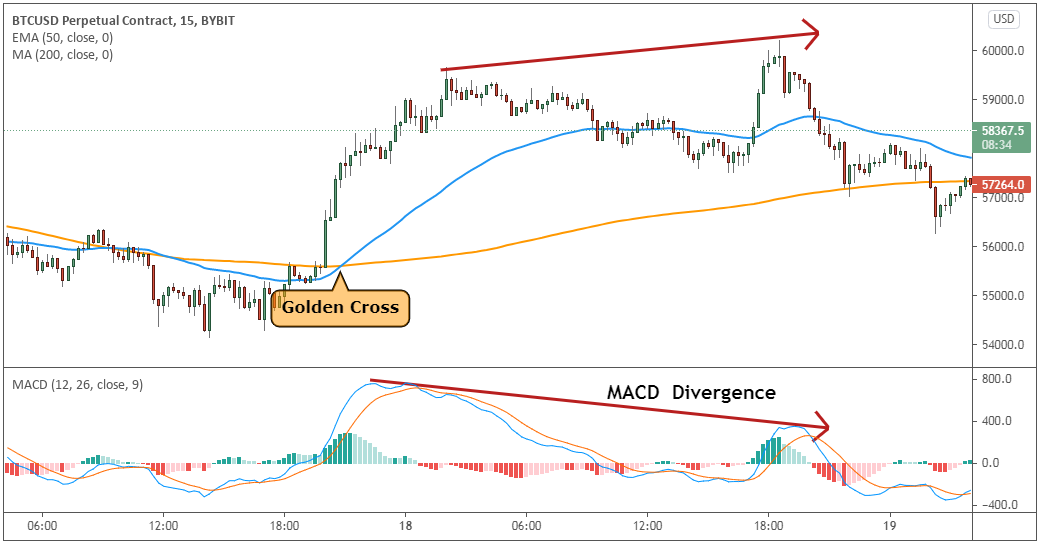 Here we can see how MACD divergence forms and initiates a bearish movement.

Let’s look at the process to take the sell trade based on the mean reversion strategy: 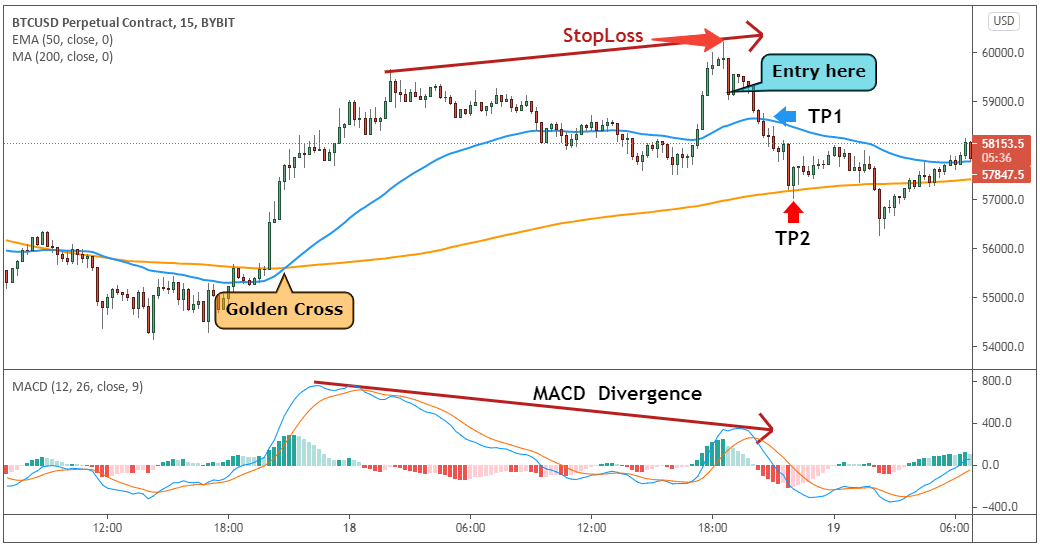 In the above chart example, we can see how the price moves lower after forming a divergence with the MACD. The gap between the price and the 50 EMA extends at the entry point. As a result, the price reverts back to its average.

Does a Golden Cross Strategy Apply to Crypto Trading?

But is it applicable to the cryptocurrency market?

The cryptocurrency market is an emerging one, in which technical analysis works completely fine, just as with the traditional forex or stock market.

Along with other technical strategies, the golden cross is very profitable in the cryptocurrency market. So, all five trading strategies that we have discussed in the above sections are profitable in any crypto pair, and across all time frames.

Like other trading strategies, the golden cross has some drawbacks. The moving average is a lagging indicator that provides signals after the movement happens.

You can quickly reduce the risk by observing what is happening in a higher time frame. If your trade direction matches that of higher time frames, you can consider it as a high probability trade.

Finally, we are at the end of the five most powerful golden cross Trading Strategies. It’s time to summarize what we’ve learned today:

Besides having a profitable trading strategy, you should focus on solid trade management skills. The cryptocurrency market is very uncertain, and there is a possibility of unexpected market movement at any time. Therefore, make sure you actively manage your trade every time to protect yourself from adverse price reactions.