Dow Theory is a technical analysis framework based on what Charles Henry Dow wrote about market theory. Dow was the founder and editor of The Wall Street Journal and co-founder of the American leading stock index, Dow Jones & Company.

Charles Dow didn’t record his ideas as a theory per se, but after his death other writers accumulated his thoughts and refined his views into Dow Theory. Now, Dow Theory is one of the basic concepts of technical analysis that’s used in financial markets, including the modern cryptocurrency market.

This article breaks down Dow theory and the different stages of the market, based on Dow’s work. Moreover, we’ll share some practical chart reading techniques based on Dow Theory that can help investors trade any crypto asset.

What Is Dow Theory?

Dow Theory is the most common and basic form of technical analysis related to trading any financial instrument and commodity in an open market. Charles Dow developed his theories in a series of articles in The Wall Street Journal, which he founded in 1889.

Dow Theory is mainly used for predicting the direction of a trend by simply observing how the DJIA and DJTA indices move. If the two indices move in the same direction by making a series of higher lows, followed by consecutive higher highs, the trend is considered bullish.

Conversely, Dow Theory states that the market is in a downtrend if one of its averages breaks below a previous important low and is followed by a similar decline in other averages.

Overall, the Dow Theory that we see in the present market has been developed by many contributors in its long history of more than 100 years. In the modern world, this concept is still applied to trading cryptocurrencies and their derivatives.

Dow Theory comprises a set of rules that guides investors in framing the market. These six basic tenets of Dow Jones may help investors make more accurate trading decisions during both bullish and bearish markets.

Dow broadly categorized market trends into three types, depending on their duration. 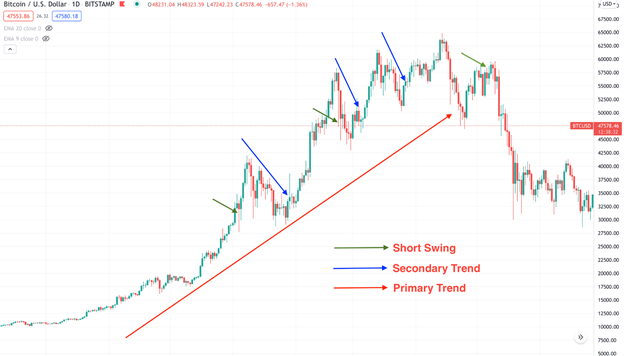 The above image is of a BTC/USDT daily chart in which the primary trend is bullish. Within the bullish trend, there is some bearish correction marked as a secondary trend. 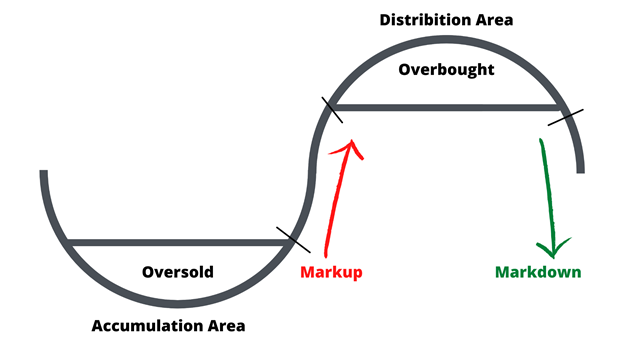 According to the efficient market hypothesis (EMH), the current price of an asset reflects all publicly available news. This means that even if an individual doesn’t analyze associated market information, the asset will follow the sentiment resulting from the latest news. Therefore, investors should consider future potential or failure based on both reactive and proactive news. That said, there is no guarantee that the market will follow sentiment generated by the most recent news events.

In an efficient market, the price of a crypto asset will react immediately after salient news is released, reflecting the impact of that news on market sentiment 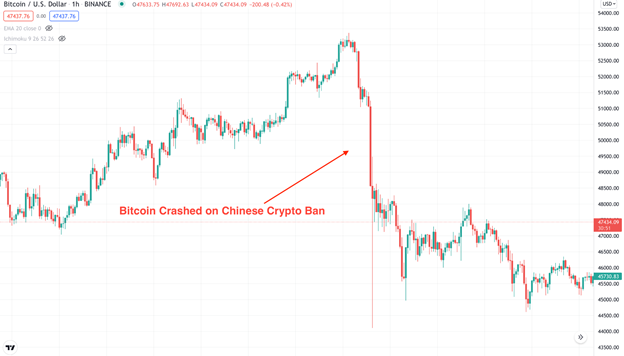 This principle states that Dow’s industrial and transportation-based averages should match direction.

The concept behind this thinking is that the indices which come from the production and selling of goods are correlated. For example, transportation needs to deliver produced goods from warehouses. Therefore, if transportation stocks become weaker, this will cause industrial stocks to fall as well.

Ideally, the industrial and transportation averages should confirm a stable market sentiment by moving in tandem. If one of the indices moves higher while the other one moves lower, this produces a divergence, considered a possible precursor to a reversal of the current market trend.

However, in the present world, businesses don’t use railroads to deliver goods. Instead, they use air, sea, etc. Even tech companies like Microsoft, Apple and Google might not need such deliveries. In this case, investors can use other indices like the S&P 500, FTSE 100 or NASDAQ 100 to discern the market’s direction. 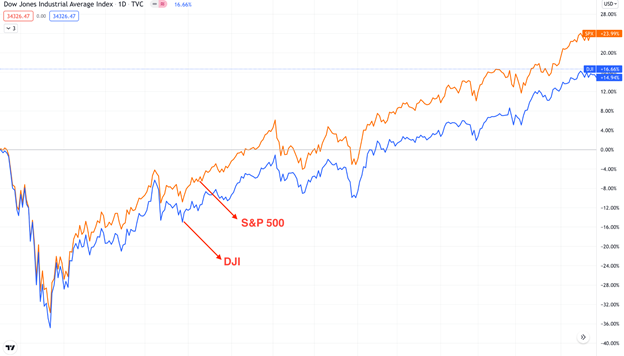 The above image shows the correlation between the DJIA and S&P 500. They’re moving in sync, which means they’re positively correlated.

Trading volume toward the primary trend should be high from the very beginning, and should decrease if the price moves against it. Higher volume indicates that a large number of people are joining the trend, increasing its stability.

On the other hand, low volume against a major trend signifies that there’s weaker market participation with lower probability of trades. 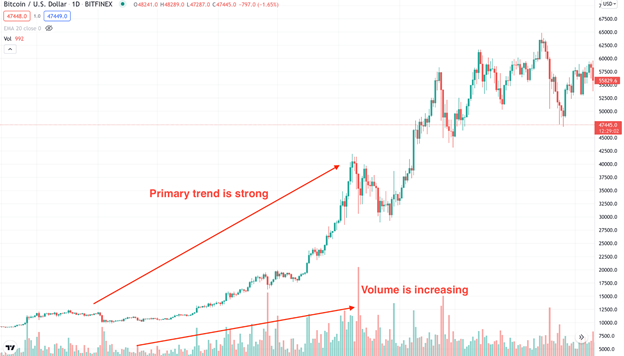 According to Dow Theory, a primary trend will continue until there’s a major event that shifts market sentiment in the opposite direction. However, the primary trend should always be given the benefit of the doubt during potentially temporary reversals. 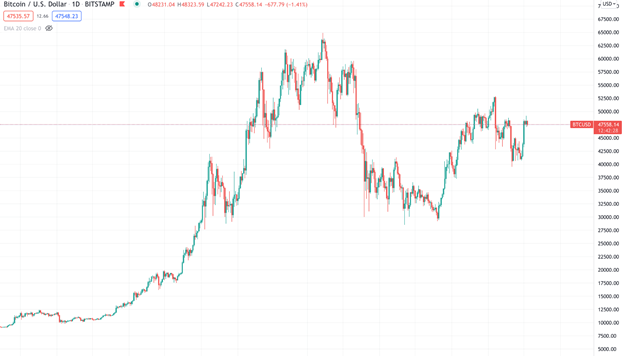 The above image of a BTC/USDT daily chart shows the price moving up within a strong uptrend, even if there is a 30% to 50% sell-off.

This demonstrates the concept of opening a trading position toward the primary trend, and ignoring any opportunity to trade against it.

How to Apply Dow Theory in Crypto Markets: Primary and Secondary Trends

Dow theory is based on 100-year-old principles. Therefore, many investors question effectiveness in modern financial markets, particularly regarding cryptocurrency.

Today financial markets are powered by high-frequency trading algorithms, but behind the market’s formation the human brain retains a strong logic. Therefore, Dow Theory can still be applied to cryptocurrency markets, though investors should use it differently.

The DJTA isn’t relevant in the present world, where tech stocks have replaced the DJTA with the NASDAQ 100. Therefore, we can’t use the DJTA in conjunction with the DJIA, but the concept of reading the larger market trend remains the same.

Let’s apply Dow Theory to the crypto market in order to find a profitable price direction.

For the BTC/USDT chart below, the overall primary market is still bullish, creating swing highs from the very beginning. 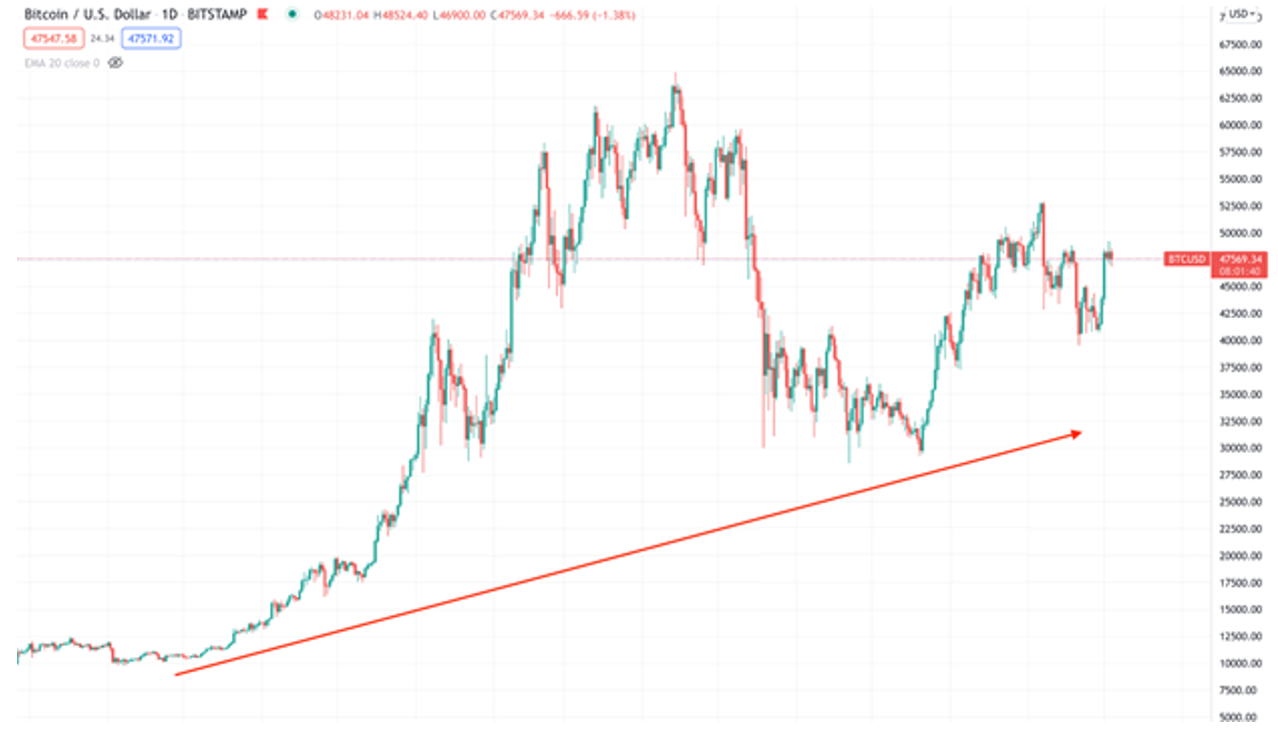 The above image is a daily BTC/USDT chart in which the primary price trend is bullish, and the secondary trend is bearish.

According to Dow Theory, we need to make trades toward the primary trend only. In this case, investors should wait for the secondary trend to end. The bearish secondary trend will end once the price moves above the most recent swing high, as shown in the image below. 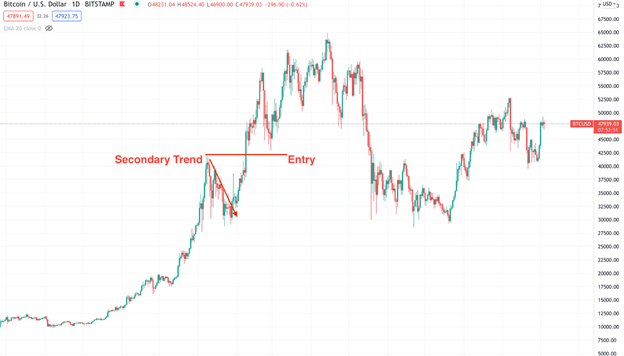 The above image shows how the price moves down in the second wave, but recovers immediately after breaking above the most recent upward swing. As a result, the price moves up with impulsive bullish pressure.

How to Apply Dow Theory in Crypto Markets: Accumulation and Distribution

Besides considering primary and secondary trends, investors should include the accumulation and distribution phases, with support from volume data, in order to obtain a more precise trading entry. 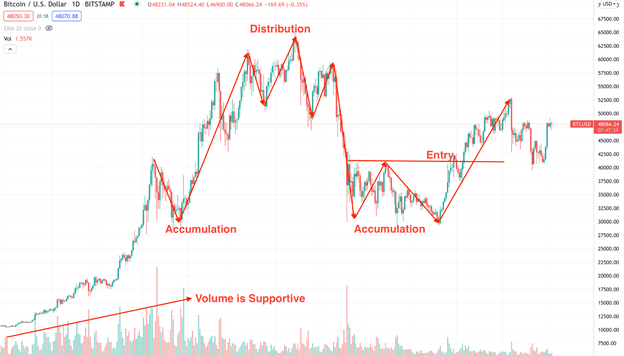 In the above daily BTC/USDT chart, the buy entry is decided via the following confirmations:

Weaknesses of Dow Theory — and How to Overcome Them

Another point worth considering is that the reliability of the current market trend is hard to define. According to Dow Theory, an uptrend is still valid even if a price is nearing a swing low. Similarly, a downtrend is considered to be active if the price is at a swing high. Thus, Dow Theory can be followed in the long run if one only considers higher bottoms and lower tops. What is within the primary or secondary trend is not clearly explained.

As a result, investors should add other elements to their charts to increase trading probability. Dow Theory is still valid and effective in the cryptocurrency market when you add tools like moving average, MACD, stochastic oscillator, or even VWAP for more effective trading. If multiple indicators show the same direction, the price is more likely to follow the side.

The Bottom Line for the Dow Theory

We hope that this guide helps you understand what is Dow Theory and how it’s relevant to the crypto market. The main caveat in using Dow Theory to swing trade or day trade in cryptocurrency markets is to include correlation with other indices. The cryptocurrency market is very new, following pure supply and demand via blockchain technology. Investors can transfer their funds without any middlemen. This concept is novel, and often makes it challenging to correlate multiple indices. However, investors can group price actions of similar assets like Bitcoin and Ethereum together to identify current market sentiment.

Even if cryptocurrency traders understand how to apply Dow Theory, a strong trading plan is still required. The cryptocurrency market is volatile and still struggling to pass regulators’ requirements. Therefore, investors would do well to remain skeptical, even while injecting money into this sector with proper money management rules.