What Is NBA Top Shot: A New Way To Score NFTs

The National Basketball Association (NBA) is one of the world’s most popular sports leagues, with millions of fans in the U.S. and all over the world regularly tuning in to watch its games. In 2020, blockchain technology venture Dapper Labs, in partnership with the NBA, launched a basketball-themed NFT platform called NBA Top Shot.

The platform is now among the most popular NFT and collectible crypto projects. Thanks to the NBA’s massive popularity, NBA Top Shot has also contributed significantly to raising the awareness of the NFT and blockchain concepts among wider consumer audiences.

What Is NBA Top Shot?

Canadian blockchain technology developer Dapper Labs is a well-known outfit in the crypto industry. The company was behind the hugely popular CryptoKitties, the first high-profile play-to-earn NFT game. In 2019, Dapper Labs announced the launch of its own blockchain network, Flow (FLOW), as well as a partnership with the NBA to introduce the NBA Top Shot NFT platform.

The project is an innovative attempt by Dapper Labs to capitalize on the general popularity of the sports trading card concept — in this case, within the digital, blockchain-based environment.

How Does NBA Top Shot Work?

The NBA regularly supplies Dapper Labs with officially licensed video highlights of the league’s hugely popular games. Dapper Labs creates video clips from the supplied content and releases them on NBA Top Shot’s official platform in the form of NFTs. Users can buy these NFTs in packs and sets. NBA Top Shot also maintains an NFT marketplace where users may trade their initially purchased NFTs in the secondary market.

To use the platform, you have to sign up for an account. In the past, it was a rather straightforward process. However, due to recent cases of account abuse, it’s now mandatory to provide identity verification during registration.

Once you successfully create an account, you can start buying newly released NFTs, participate in challenges and contests, and list and delist your NFTs on the marketplace. The NFT listing and delisting is free of charge for all users. When a sale is completed, sellers pay 5% of the transaction amount to the platform. The marketplace’s default pricing is in USD. You may view the equivalent prices in ETH and FLOW cryptos, although actual crypto payments aren’t yet supported on the marketplace.

What Are NBA Top Shot Moments?

The videos released by Dapper Labs are called “Moments.” Each Top Shot Moment™ is typically based on some in-play episode — e.g., a skillful defensive steal or an impressive attacking combination — and is dedicated to the player involved in the episode. The player’s name is the main identifier for the Moment. For example, currently, the most popular Moments are associated with the Los Angeles Lakers’ legendary forward, LeBron James.

What Are Moment Tiers?

Moments are classified into four different tiers — Common, Fandom, Rare and Legendary. Moments in the Common tier normally have a large number of copies, from a few thousand to a few dozens of thousands. On the other end of the rarity spectrum are Moments from the Legendary category, with only a few dozen unique items per edition.

The Common Moments are normally, though not necessarily, the least rare, and therefore tend to have the lowest prices. Out of all the NBA Top Shot NFTs, they make up 95.8%. Some Common Moment editions may have as many as 60,000 items. These are the most Common editions within the tier. They feature the lowest prices, and might be a good entry point for NFT collectors who prefer to test out the platform with minimal investment.

An example of such a Fandom Moment is a vintage video from February 2006, in which Miami Heat guard Dwyane Wade scores a goal against the Detroit Pistons. There are nearly 240,000 items/NFTs for this Moment.

The Rare Moments feature episodes from key games or videos involving legendary players of the league. As of the time of this writing (August 26, 2022), 1.6% of all the platform NFTs belong to the Rare tier. The Rare Moments typically have a few hundred copies per edition.

However, just as with the Fandom tier, there is no specific upper limit on the number of NFTs for a Rare Moment. Some Moments in this tier have up to around 2,000 copies.

The Legendary tier features the rarest and most valuable Moments. Many Moments in this category have 99 copies per edition, though some Moments feature as few as 20–30 items. Meanwhile, the least Rare editions within the tier may have up to 125 items. Only 0.09% of all the NFTs on the platform belong to the Legendary tier.

What Are NBA Top Shot Packs?

Moments are the platform’s most basic product unit. They’re released in packs, rather than individually. Each pack contains several Moments. Depending on the pack type, these Moments may come from different tiers.

While Common packs are routinely offered by the NBA Top Shot platform for purchase, Rare and Legendary packs often have intermittent availability. Collectors need to stay tuned to the platform’s announcements and updates to get these packs when they become available.

Dapper Labs also makes additional, customized pack types, available from time to time. An example of these is the blended pack, which may have Moments from Common, Rare and Legendary tiers in variable proportions.

There are three common ways for collectors to get their hands on NBA Top Shot Moments: Purchasing packs, completing Flash Challenges and using the NBA Top Shot marketplace.

Buying packs is one way to become a part of the NBA Top Shot collector community. Normally, Dapper Labs makes base packs, such as the Starter Pack and the WNBA Starter Pack, available for purchase at any time. Additional non-base packs and sets of packs may also be offered via the platform’s Pack drops section.

Challenges are also a popular way to earn Moments. A common type of challenge frequently run by NBA Top Shot is the Flash Challenge, which is based on game or player stats. For example, challenge participants might be asked to submit a Moment with the player who’s scored the most points in the previous NBA round. Winners of Flash Challenges are given select Moments as prizes.

The third way to become a proud owner of NBA Top Shot Moments is via the platform’s marketplace. This option gives you the widest choice, thanks to the great variety of the previously released Moments listed for sale by their owners. While the marketplace might not have all the latest releases, it opens up opportunities to pick and choose Moments using a variety of useful filters. You can search for Moments for a specific player, team, NBA season, tier and more.

New NBA Top Shot Moments released by Dapper Labs may be bought using cryptocurrency as well as fiat money. Although the platform runs on the Flow blockchain, Dapper Labs has designed it to be as user-friendly as possible for people with limited knowledge of crypto.

You may buy Moment packs and sets using popular debit and credit cards Visa and MasterCard, so there’s no need to open a crypto wallet and use crypto coins to make these purchases. This helps the platform target wider consumer segments, specifically fans and collectors who are still uncomfortable with using crypto payments.

You may also use various crypto coins for pack purchases. Currently, Dapper Labs accepts the following cryptocurrencies as valid payment:

While crypto payments are supported for new packs and sets, the platform’s NFT marketplace only accepts credit and debit card payments. On the marketplace, you may view prices in ETH and FLOW, but you won’t be able to make payments in these or any other cryptos yet.

How Much Are NBA Top Shot NFTs?

The basic starter packs released by Dapper Labs are currently offered for $9 per pack. The pricing for other packs varies wildly, depending on the pack’s Moments, players featured, events or games linked to, edition rarity and a myriad of other factors. For instance, at the time of this writing, the only non-starter pack on offer is a 5-Moment WNBA Premium pack dedicated to the female league’s superstar Sylvia Fowles. The pack is priced at $89.

There is no maximum price set for packs. Recently, the most expensive Premium packs or sets of packs dropped by Dapper Labs were priced at $999. 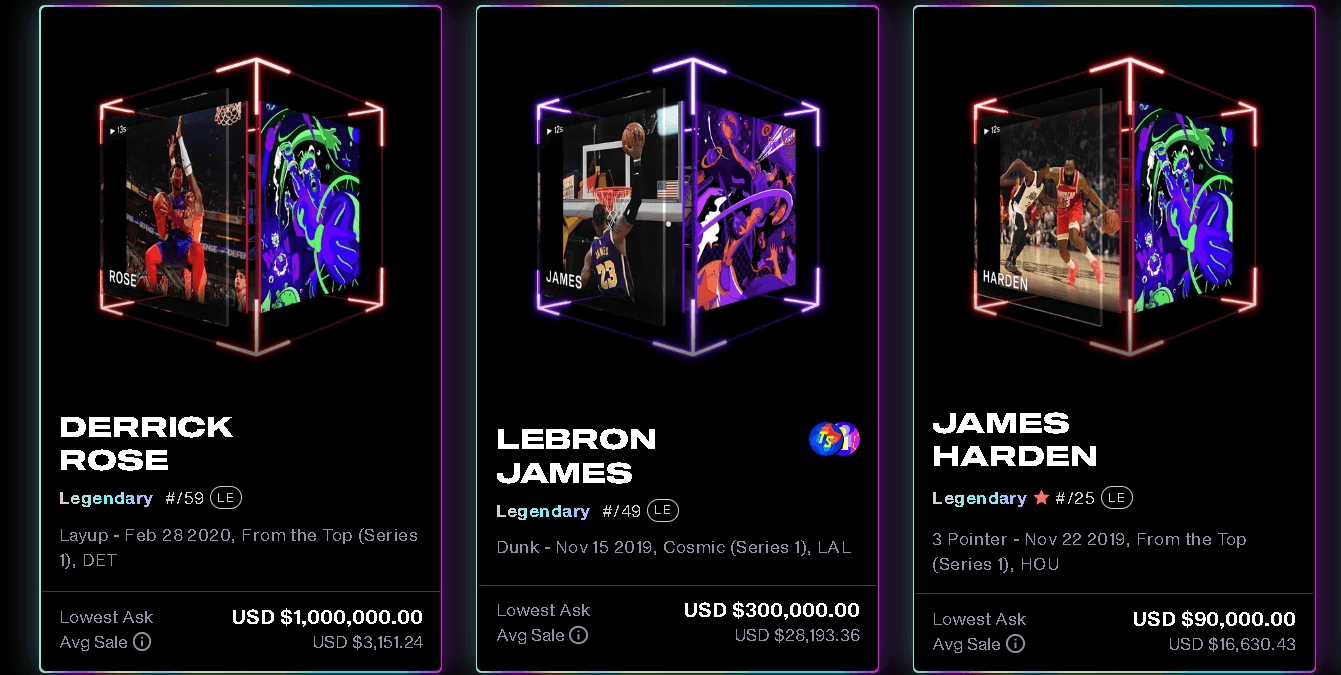 Why Is NBA Top Shot Valuable?

NBA Top Shot is the first high-profile platform that has set out to leverage the popularity of sports trading cards in the crypto world. It also has the backing of the NBA, one of the most popular sports outfits in the world. These factors have helped drive the current popularity of the platform among collectors and fans.

There’s been no shortage of enthusiasm toward the Top Shot NFTs, with some of the most expensive pieces having sold for hundreds of thousands of dollars.

The most expensive NBA Top Shot NFT sold so far, featuring LeBron James, went for $230,023. The Lakers’ forward enjoys massive popularity on the platform in general, with the top four most expensive NFT sales to date all based on his Moments. 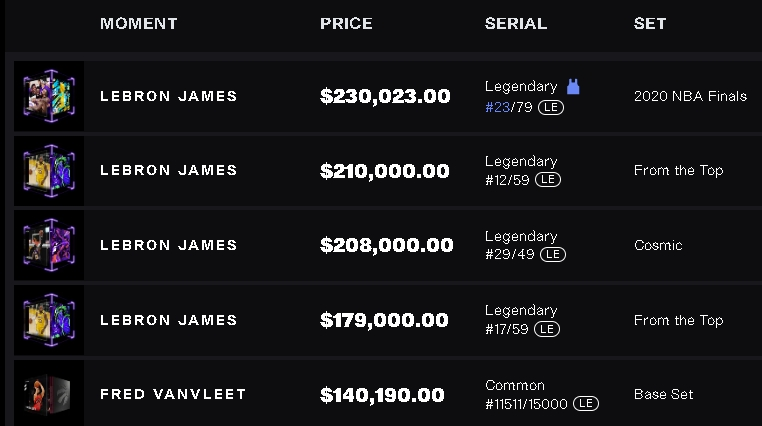 Dapper Labs also skillfully adds the elements of scarcity and varying degrees of rarity to the NFTs, further driving the user community’s interest in the platform. All these factors help add value to the NFTs.

Is NBA Top Shot Worth Investing In?

NBA Top Shot NFTs might be well worth investing in if you believe that your NFT is likely to gain value in the future. However, as with any other crypto asset, expected returns from these NFTs may vary depending on a large number of factors, both external and those specific to the platform.

In general, we would expect these NFTs to perform relatively well in the foreseeable future due to the following factors:

Many NFT collectors and traders look at a variety of different NFT platforms before making a purchase decision. During these evaluations, NBA Top Shot is often compared to another hugely popular NFT platform — the Bored Ape Yacht Club (BAYC).

BAYC is a collection of 10,000 NFTs with images of “bored” primates. Unlike NBA Top Shot, where new NFTs are regularly released by the platform’s operator, the BAYC collection is fixed at 10,000 items. This adds a further degree of scarcity to these NFTs. As a result, the cheapest NFTs in BAYC are now on sale for nearly 80 ETH (around $136,000).

If you’re not a high-stakes NFT trader or investor, even the cheapest Bored Ape NFTs are probably out of your budget. In comparison, the entry point to ownership of an NBA Top Shot NFT is just $2–$3, hardly a sum that will break your bank.

Check out other NFT projects on Bybit NFT Marketplace now

The Future of NBA Top Shot

The outlook for NBA Top Shot is quite positive, and we expect the platform to continue building on its current success. As far as the future NFT prices are concerned, it’s likely that the cheaper NFTs on the platform — those based on high-volume Common tier editions — will keep trading for minimal amounts due to the regular supply of new NFTs by Dapper Labs.

Given that the new NFT supply is controlled by Dapper Labs, the company may adjust the supply levels to create more scarcity for its Premium packs and sets. This would help support or boost the pricing for Premium NFTs in the secondary market as well.