The MAYC collection was launched just a few months after its predecessor, BAYC, which launched in April 2021.

That’s just a glimpse of the history of MAYC. But the important question is: Should you invest in Mutant Apes? Are they valuable? What’s so unique about these NFTs that make them the most expensive ones on the market?

We’ll answer these questions and others for you in this article.

What Is the Mutant Ape Yacht Club?

The Mutant Ape Yacht Club is an NFT project that’s an extension of the Bored Ape Yacht club. It was created by Yuga Labs in August 2021 to expand the BAYC ecosystem, invite new members into the community by giving more people the opportunity to earn tokens, and reward existing Bored Ape holders with a brand new NFT. MAYC is among the most expensive NFT collections on the market, with an average price of $24.42K.

The MAYC NFT collection has 20,000 pieces of digital art, which is double the number of the original BAYC collection. You can become a part of the community by either purchasing Bored Ape NFTs and mutating them by giving them a serum (more on serums later), or you can buy a Mutant NFT directly.

Each Mutant has certain features that make it unique. The rarer the features, the pricier the NFT will be. For instance, the M2 Stunt Jacket attribute is only found in 0.4% of the Mutants, so NFTs with this feature cost more as compared to other Mutant Apes in the ecosystem.

You can learn about the distinguishing traits and their rarity according to percentage by looking at the details of the Mutant or the Bored Ape NFTs on the OpenSea NFT Marketplace. Such information is usually displayed under the Properties tab. 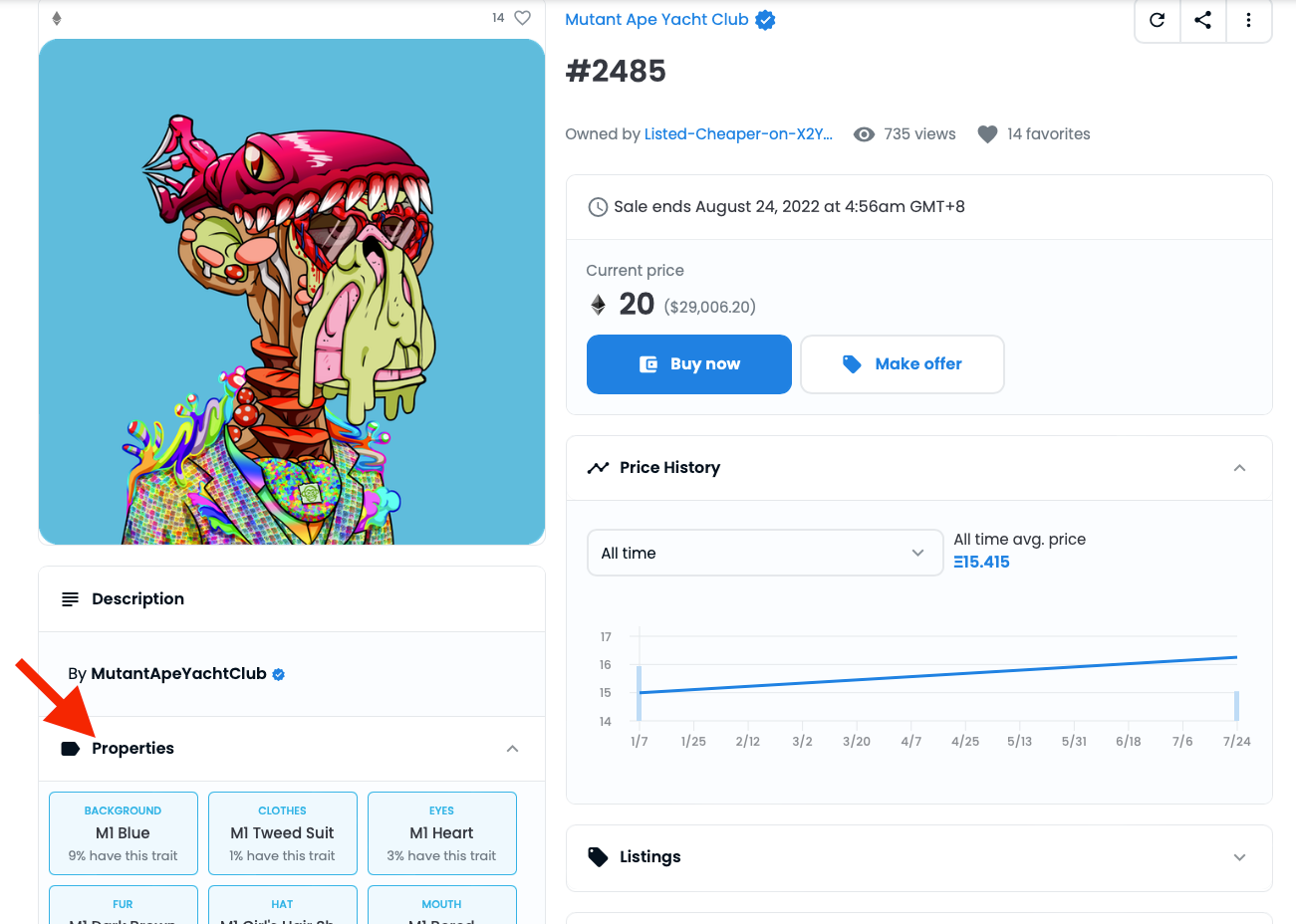 The things that make the Mutant Ape Yacht Club NFT collection unique are its limited supply of NFTs, and the Mutant Serum. You can think of this serum as a digital tube filled with a magical liquid that Bored Apes take to become Mutated Apes.

The Three Tiers of the Mutant Serum

There are three tiers of the Mutant Serum vials. These are M1, M2, and M3 or Mega Mutant, which is the holy grail of the whole ecosystem. M1 is the least expensive one. There were 7,500 vials of this serum at the time of launch. It creates a Mutant with features similar to the original Bored Ape. M2 is a bit pricier than M1, totaling 2,492 vials at launch. It also creates a Mutant NFT similar to its Bored Ape.

M3 serum is the most unique, with only eight vials ever created. At the date of writing (7/29/2022), all but one of the vials of M3 serum have been burned.

The uniqueness of the MAYC is also due to its exclusive community and Discord, which includes celebrities and crypto whales.

You can enjoy incredible perks by simply being a member of the MAYC or the BAYC. There’s always something unique being airdropped for free to MAYC members, which gives them a leg up in the NFT space and even in its metaverse, Otherside.

For example, the Mutant Ape NFT owners were able to claim 2,042 ApeCoin tokens during its launch on March 17, 2022. And as a part of BAYC’s Road Map 2.0, all original Bored Ape and Mutant NFT owners will be given free 3D models of their NFTs that they can use in the metaverse. Since these NFTs are considered elite, anyone walking around the metaverse in the form of a Bored Ape or a Mutant can instantly become a celebrity.

There are two ways to own an MAYC NFT. You can either buy a Mutant ape, or make your own Mutant Ape by using the Mutant Serum on your Bored Ape. 10,000 Mutant Apes were released during the public sale, while 10,000 mutant vials were randomly airdropped to existing BAYC holders.

If you’re a Bored Ape Yacht Club NFT holder, you can actually create up to three Mutant Ape NFTs by using a smart contract to apply M1, M2 and M3 serums to your Bored Ape! Don’t worry, this mutation process doesn’t destroy the original BAYC NFT, so you get to be the proud owner of both BAYC and MAYC NFTs.

Are All Mutant NFTs the Same as Their Bored Apes?

Most of the Mutant Ape Yacht Club NFTs are variations of their BAYC Apes, but a few of them, called the Mega Mutants, have unique features. You can inject a vial of a certain type of serum only once to each Bored Ape. So you can’t have two M1 Mutant Ape NFTs or two M2 Mutant Apes for the same Bored Ape Yacht Club NFT.

To create a Mutant, you need to use a serum and pay the required gas fee through your wallet. It usually takes a few seconds for the Bored Ape to turn into a new NFT. Afterward, you can send the resulting Mutant Ape NFT to your wallet address.

Multiple reasons make joining Mutant Ape Yacht Club valuable. Primarily, it’s the fact that by owning a Mutant NFT, you can join the BAYC ecosystem at a lower tier of membership. By being a part of the MAYC community, you can enjoy most of the same perks as BAYC members. These include access to exclusive merchandise, tips on upcoming NFT drops and a community of like-minded enthusiasts, including celebrities like singer/songwriter Post Malone and soccer star Neymar Jr.

Rarity of Mutant Serums Enhances the Value of MAYC

Another reason for the high value of the MAYC NFT collection is the rarity of Mutant Serums. Rarity drives up demand. One vial of the Mega Mutant serum was sold for nearly $5.8 million because of its high demand and rarity, even though it was acquired for free by the BAYC token holder. Even M1 and M2 serums that aren’t as rare as M3 sell for a lot of money.

Owning a Mutant Ape also has commercial value. You can sell it for profit, or license it out to magazines, marketing agencies or music production companies to earn a passive income. That’s because you own the intellectual rights to the NFT you hold. For example, someone licensed their Bored Apes to the Universal Music Group label named 10:22PM, thus allowing the company to create a music group based on their Bored Apes.

Holding Mutant Apes is also a social symbol. People put them on their skateboards, and celebrities display them on their musical album covers. NBA player Tyrese Haliburton paraded his BAYC Ape on his on-court sneakers for a game in November 2021.

Excellent Reputation of the MAYC Team

The team behind Mutant Ape Yacht Club has a track record of sticking to their NFT road map and running a highly successful project — BAYC. That increases people’s confidence in MAYC and, subsequently, the value of these NFTs. Big companies such as Google Ventures and Samsung have invested in Yuga Labs, which adds further value to the entire ecosystem.

Should You Invest in Mutant Ape Yacht Club?

Although there is a trove of benefits to investing in the MAYC and joining the community, it’s not for everyone. The threshold to enter this club is extremely high — and that’s why we don’t think it’s worth buying for the average investor. Hence, we recommend that you don’t invest in these NFTs unless you’re wealthy enough to bear a loss, should that happen.

The BAYC and MAYC are part of Road Map 1.0. Yuga Labs is already working on Road Map 2.0, which will include live events and 3D avatars, among other things. Mutant Ape Yacht Club is also touted to be integral to the new road map as the company expands its ecosystem.

Even if you can’t invest in the MAYC NFTs just yet, keep a close eye on the progress in this ecosystem because it has a big role in shaping the future of the metaverse and crypto world.