LooksRare (LOOKS): A Rewarding NFT Marketplace for Anyone

NFTs, or non-fungible tokens, amassed over $24 billion collectively from sales in 2021. NFT collections such as CryptoPunks and Bored Ape Yacht Club (BAYC) went viral, and many crypto enthusiasts bought NFT art aligned with their digital identities.

One NFT marketplace that took off in early 2021 was OpenSea, which recorded an all-time high trading volume of nearly $5 billion in January 2022. Although OpenSea currently dominates the NFT space, a platform called LooksRare has gained tremendous hype on social media platforms and is positioning itself to be quite the competitor with attractive features for users and a daily volume exceeding $394 million. Here’s a deep dive into LooksRare.

LooksRare is a decentralized, community-first NFT marketplace that actively rewards traders, token stakers, creators and collectors for participating on the platform.

Two unidentified founders going by the pseudonyms “Zodd” and “Guts” launched the platform in January 2022, with a team of 11 members tending to the project’s development. The aim of LooksRare was to dethrone OpenSea from its number one spot in the NFT market.

LOOKS is the native token that powers the LooksRare marketplace. It has a total supply of 1 billion and stands at a price point of $1.02 at the time of this writing.

What Is LOOKS Used For?

LOOKS is used for the following purposes.

LooksRare users can stake their LOOKS tokens on the platform to receive over 700% APR in WETH (wrapped Ether) and LOOKS. The APR will decrease over time with an increase in onboarding and number of stakers.

There are two types of staking: active and passive.

Most token stakers are active stakers, whose LOOKS tokens are fully unlocked.

Daily LooksRare rewards are calculated at the end of each previous period, and split between active and passive stakers before being dispersed.

The WETH rewards to be distributed among active stakers in each 6,500 block period are calculated as follows:

The total WETH rewards acquired are calculated by comparing each user’s staked LOOKS at each block to the total quantity of LOOKS staked at each block during the 6,500 block period.

The LOOKS token is a medium for giving back to active participants, like users and creators, in the following manner:

Both the buyer and the seller of an item earn incentives for their trade volume (other than for private sales). Trading rewards are computed daily and distributed two hours after the end of the day. They’re calculated according to each user’s trade volume in eligible collections, as a proportion of the total platform transaction volume for qualifying collections.

Claiming is halted for two hours each day, between 00:00AM and 2:00AM UTC, while processing trading rewards. These rewards can be claimed at 2:00AM UTC every day.

Users who stake LOOKS tokens are rewarded with 100% trading fees.

The platform’s users can stake LOOKS and earn extra LOOKS rewards over and above the WETH trading fee incentives. In addition, the staked LOOKS tokens are compounded automatically for those who want to leave their LOOKS tokens staked.

Users must manually stake their pending rewards in order to maximize their portion of staked tokens. However, since this wastes gas fees and opportunity costs, LooksRare has facilitated auto-compounding for all LOOKS users.

LOOKS rewards obtained from the staked LOOKS balance are now re-staked (or compounded) into the pool immediately to increase the number of LOOKS staked. When users unstake their LOOKS, both the initial staked amount and the compounded rewards are withdrawn to the user’s wallet.

How Does LooksRare Work?

LooksRare is built on the Ethereum blockchain and allows participants to trade Ethereum NFTs available on OpenSea. The platform charges a 2% sales fee (in WETH) on all NFT sales, excluding private sales.

All WETH fees accumulated from sales are combined at the end of every 6,500 ETH block period (approximately 24 hours) and distributed to LOOKS token stakers per block during the next 6,500 block span.

Users can claim their WETH rewards as often as they want, but have to pay gas fees on each withdrawal. If they forget to claim their WETH, or prefer to wait until gas fees are lower, their WETH will continue to accumulate as long as their LOOKS tokens remain staked.

As a community-first project, 100% of the revenue generated is distributed to stakers of LOOKS tokens. The team does not gain revenue directly from the project, and is rewarded only if the project does well.

The following are the key features of the LooksRare platform.

LooksRare puts its users first by distributing rewards, a feature which OpenSea doesn’t offer. Below is a chart showing the jump in trading volume from January 10–16, 2022. 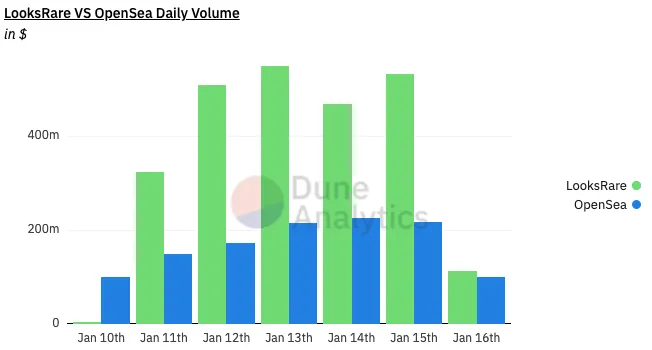 “Vampire attack” is a common crypto term to describe how a project tries to capture a similar project’s user base by offering better rewards. LooksRare launched a vampire attack on OpenSea to lure users to its platform. As a result of airdrops launched by the LooksRare platform, the price of a LOOKS token rose to nearly $7 just ten days after its release.

Users must first check their eligibility for claiming LOOKS by connecting their wallet to LooksRare. Eligible users will then see a message that invites them to list an NFT. After the user has listed their ERC-721 or ERC-1155 NFT, they can claim LOOKS via the banner on the platform’s official homepage.

LooksRare’s community has developed a reward system to attract users to its platform from staking to trading. The platform’s users are rewarded with WETH and LOOKS tokens simultaneously, with staking rewards exceeding 700% APR.

Royalty payments are paid instantly to creators once a sale is made, eliminating any delay in settlement.

The platform promises to distribute 100% of the platform fees as rewards to LOOKS token stakers.

Since LooksRare’s smart contracts are built on a modular system, new features can be implemented efficiently over time. The platform can do so without compromising security, thanks to standardized signatures which outline the execution plan in a transparent manner.

Some new features that LooksRare plans to implement in the near future include:

Collection Offer: Users can make an offer that includes all NFTs in a selected collection.

Trait Offer: Users can buy any NFT with a specific trait in a collection.

LooksRare is different from OpenSea in a few key aspects:

The total supply of LOOKS tokens is 1 billion coins, and is distributed as follows: 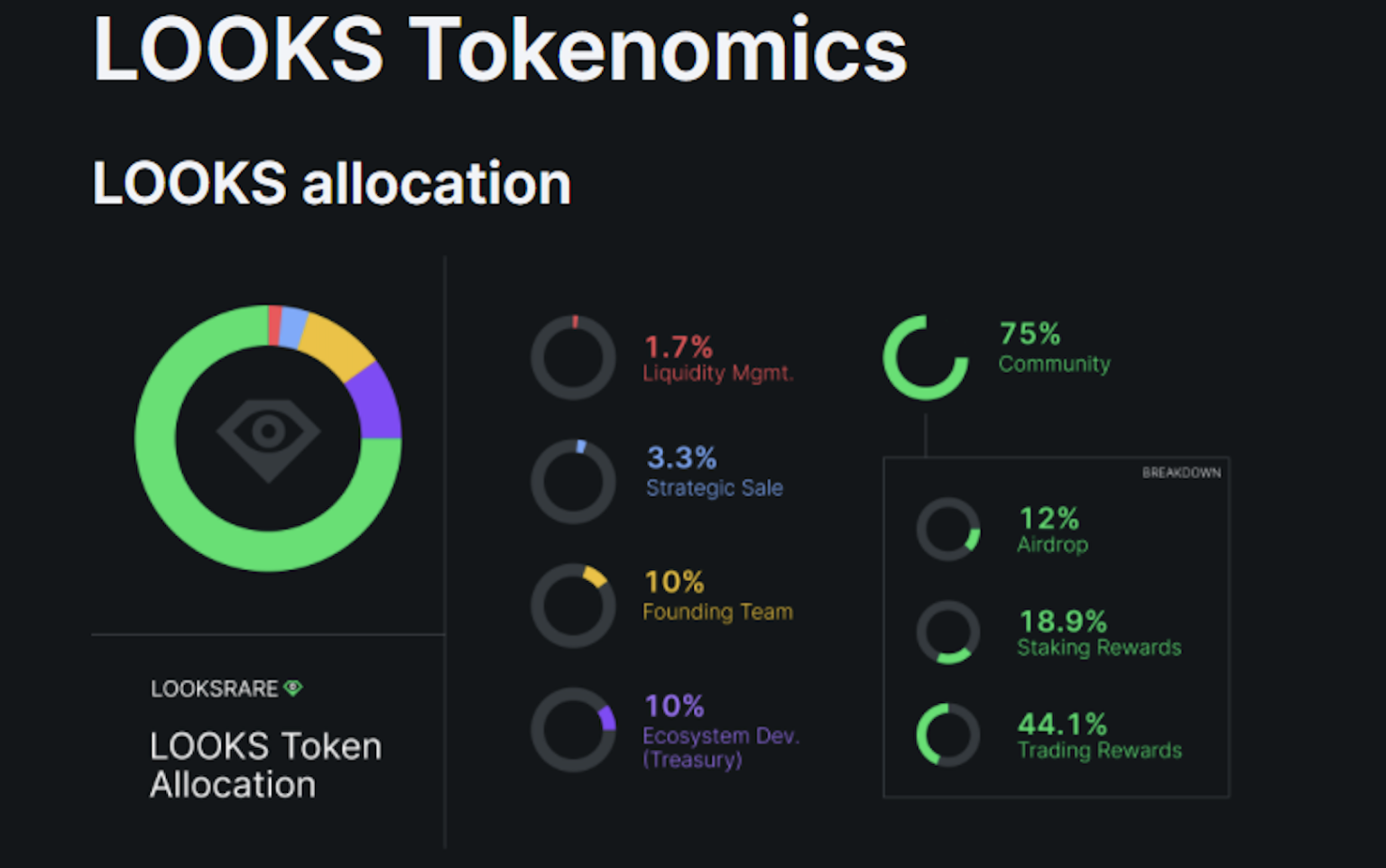 Is LooksRare a Good Investment?

As mentioned earlier, the LOOKS token hit nearly $7 in the initial days after its launch. Its strength has also multiplied since the platform launched a vampire attack on OpenSea and successfully enticed its users with airdrops. LooksRare surpassed an NFT trading volume of $100 million in ETH within two days after its launch.

At the time of this writing, one LOOKS is valued at $1.02. Crypto Academy predicts that the price of one LOOKS token will increase to approximately $6.04 in the upcoming year (over six times higher than its current price.) Its price may further increase to $7.09 by 2024, and $7.33 by 2025.

The LooksRare platform has filled the gaps created by OpenSea since it rewards, empowers and gives back to its loyal and active user base. On the flip side, LooksRare has a long way to go before it matches OpenSea’s platform development and level of services offered.

The LooksRare token, LOOKS, cannot be purchased directly using fiat currency. However, you can buy USDT tokens with fiat money and swap them for LOOKS tokens.

Here’s how you can acquire LOOKS tokens in three simple steps:

Step 1: To purchase LOOKS tokens, you’ll first have to create an account on an exchange like Bybit. You may be asked to provide basic details like your name and KYC information, including your phone number, email ID, and address.

Step 2: If you don’t own USDT, you need to purchase USDT tokens with a debit card, credit card or bank transfer.

LooksRare is worth keeping an eye on if you want to buy or sell NFTs in the near future. As a community-first NFT trading platform, LooksRare has a solid rewards system that benefits everyone, from platform traders to token stakers. Although OpenSea has gained significant headway on other marketplaces so far, LooksRare is catching up and has managed to create a vibrant community, following through on its promise of rewards for its users, and serving as a viable alternative.

As long as there’s active interest in the NFT market, LooksRare has plenty of potential to grow. That said, we recommend that you assess your portfolio and determine the risks you’re willing to take before joining the platform.