Artificial Intelligence (AI) has revolutionized the way humans work, interact, and consume content. The use of AI is increasing in pretty much all aspects of life and industries, including the cryptocurrency industry.

Combining AI with non-fungible tokens (NFTs) is not exactly a new concept. The technology is already being used in the creation of NFT art and music, with startups like Eponym releasing an AI algorithm that converts text into abstract art which is sold on NFT marketplaces.

Alethea AI wants to take the merger of AI and NFTs a step further by creating an entirely new class of intelligent assets, imbued with AI personality traits, which can grow and evolve based on the data they consume. In this guide, we’re going to take a look at what Alethea AI is doing, how it works, and whether it’s a good investment.

What Is Alethea AI?

Alethea AI is a decentralized protocol for creating smart avatars which use AI to interact with people. The platform has originated a new standard for NFTs, called intelligent NFT (iNFT), which enables the creation of NFTs embedded with AI animation, voice synthesis and generative AI capabilities. Developers can use the iNFT protocol to create, train and earn from their creations in Alethea’s metaverse, which is known as Noah’s Ark.

The NFT craze is showing no signs of slowing down following the technology’s meteoric rise in 2021. It kicked off with the historic sale of digital artist Beeple’s NFT artwork, Everydays: The First 5000 Days for $69 million at Christie’s. The NFT market gained much popularity in 2021, with some firms estimating that total sales exceeded $40 billion in 2021.

NFTs represent unique digital assets, or collectibles, which use the blockchain to create a permanent, publicly accessible record of ownership. These tokens, which generally use Ethereum’s ERC-721 token standard, are completely unique and can’t be replicated, making them the perfect medium for representing digital ownership of assets.

The NFT ecosystem has experienced an explosion in innovation and creativity, with new intellectual property being created at an incredible scale. Alethea’s developers believe their intelligent metaverse, Noah’s Ark, will act as the connective tissue that connects numerous NFT projects with AI to create new, interactive experiences.

In their current form, most NFTs are pretty run-of-the-mill. An NFT can represent an image, artwork, GIF, book, video, or cartoon avatar. It can be held as a long-term investment, traded as a whole on crypto marketplaces, or fractionalized to attract small- to mid-tier investors—but that’s about it. 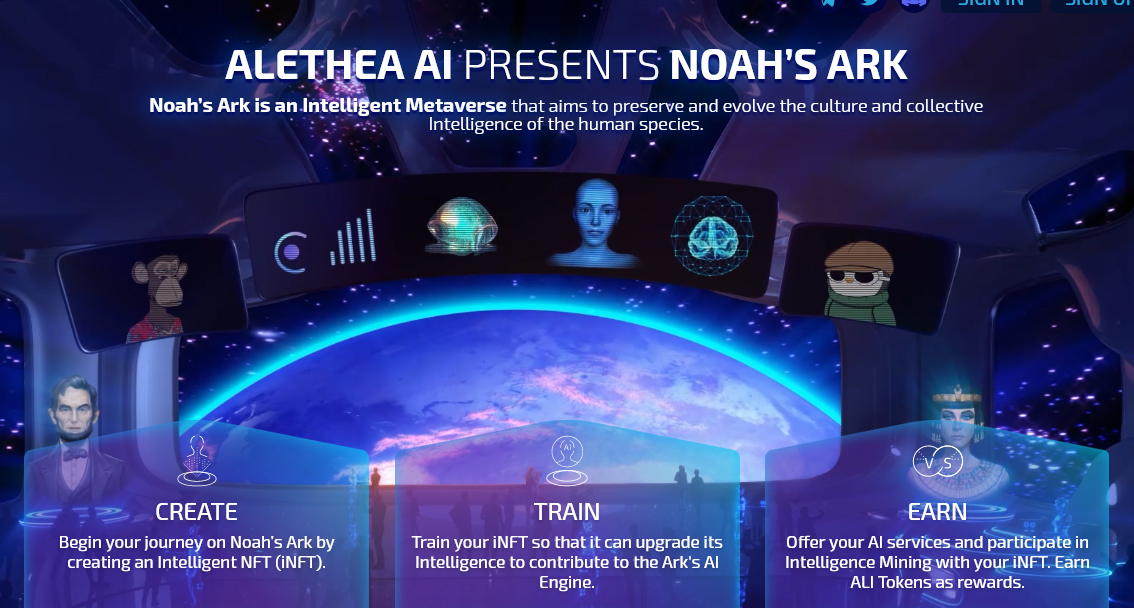 Alethea AI is a platform where developers can create, train, and earn from their intelligent NFT avatars. Image source: Alethea.ai

Alethea AI wants to create a new class of NFTs that are intelligent enough to interact with users. The slogan “Give your NFT superpowers” (on Alethea’s website) perfectly captures that ideal. By incorporating AI with NFTs to build “intelligent non-fungible tokens,” or iNFTs, developers will be able to create assets with unimaginable use cases.

As the popularity of iNFTs within Noah’s Ark increases, so too will the possibilities of interactions and collaborations between iNFTs, enabling the emergence of an “intelligent hive mind” that powers the Ark’s AI engine. Alethea’s ultimate goal is to create an ecosystem that can explore what it means to be human and what constitutes a personality — and to discover how an intelligent metaverse can help shape our stories, culture and intelligence.

Alethea AI has already sold its first iNFT, an AI-powered avatar called “Alice,” through Sotheby’s auction house for nearly $478,000 in June 2021. Before the sale, Alice starred in a Twitter live video on Sotheby’s account and answered questions from viewers in real time.

The Alethea AI team sees its iNFTs as the path to the metaverse, the universe of virtual worlds that are all interconnected, similar to concepts in sci-fi books like Ready Player One and Snow Crash. The project has received a lot of attention from institutional investors, and has even received backing from billionaire crypto investor Mark Cuban. 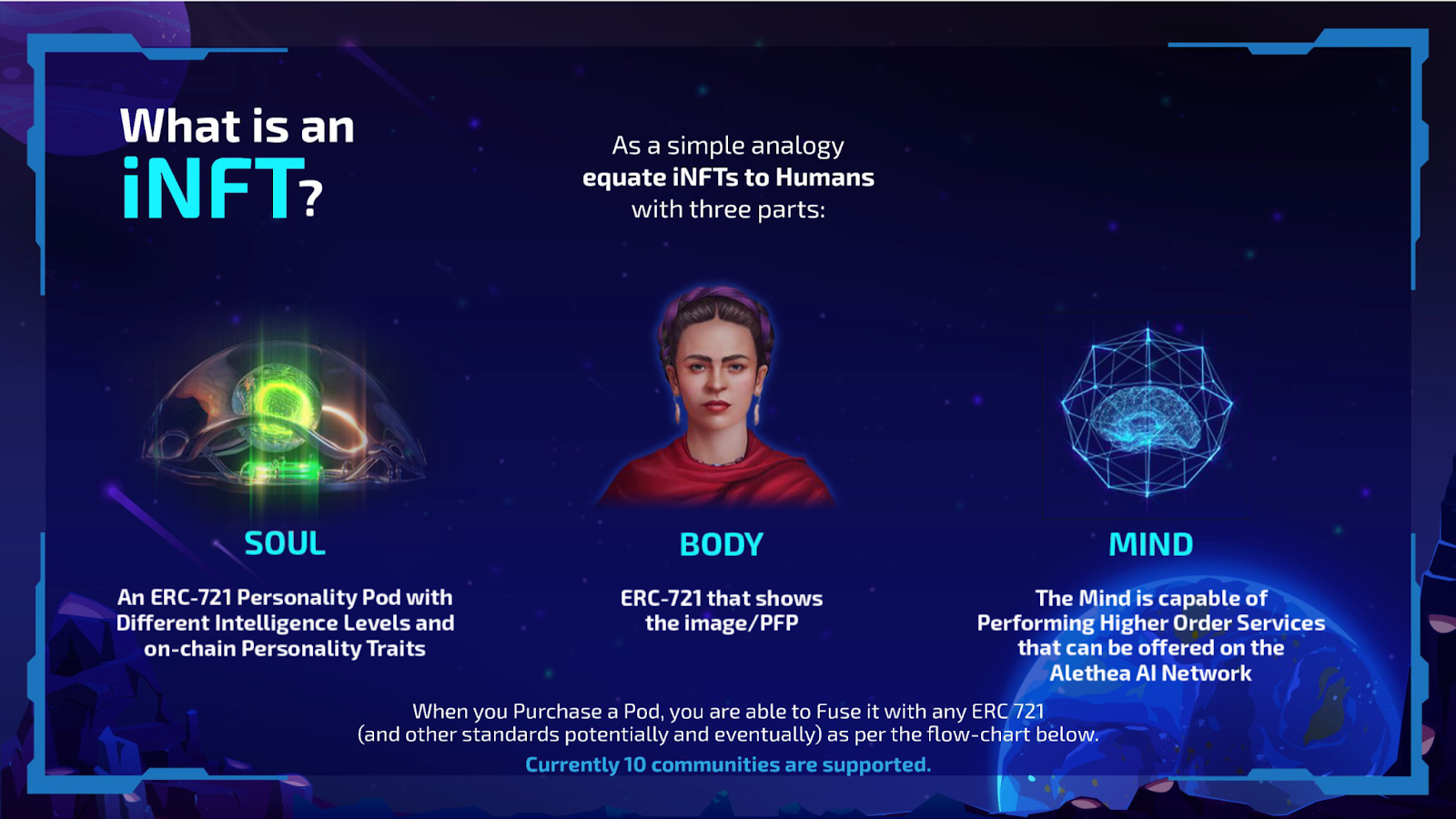 iNFTs have a body, soul, and mind. Image source: Alethea

iNFT, or intelligent non-fungible token, is a new token standard by Alethea AI that combines two technologies: AI and the blockchain. iNFTs are unique AI-powered digital assets with personalities and blockchain-managed ownership. They bring the underlying unique digital asset to life by using the generative abilities of AI. An iNFT has three core parts:

Alethea’s developers have chosen iNFTs as the medium for preserving human history and culture because of their fusion with AI, decentralized nature, blockchain provenance, and tokenized incentives.

The Technology Behind the Protocol

The iNFT protocol, which is a set of smart contracts deployed on Ethereum, can be used by anyone to create iNFTs in a permissionless manner. Unlike close-ended chatbots, which are coded to answer questions with generic answers, iNFTs use large language models to create truly open-ended and temporally consistent AI-generated personalities.

Alethea AI uses OpenAI’s GPT-3 technology, and embeds the hash of the AI dataset on-chain, as a method to create verifiably decentralized AI-generated personalities via an ERC-721 asset called a “personality pod.” The personality pod is made up of on-chain personality traits, such as intelligence level, voice and psyche, that shape the overall personality of an iNFT and dictate its intelligence.

The Alethea development team has refined the design of the personality pod to enable iNFTs to be trained using nature and nurture. Developers can nurture their creations with the traits found in the personality pod, and then the iNFT will evolve based on the nature of its personality. For example, an iNFT programmed with a narcissistic disposition will tend to evolve toward being a narcissist. Interactions between users and iNFTs will shape and fine-tune the outputs of the iNFT’s personality.

The personality pod can fuse with any NFT and give it intelligence. The act of fusion involves locking the personality pod within the smart contracts of the iNFT protocol, which is a noncustodial framework, while leaving the NFT unchanged.

The fusion of a personality pod with an NFT. Image source: Alethea.ai

Alethea AI is selling the first 10,000 personality pods in an exclusive drop on OpenSea. Anyone looking to bring their NFT into the intelligent metaverse can do so by buying one of these personality pods and fusing them with their NFT.

The Alethea ecosystem has a native token, called ALI, which is used to power Noah’s Ark, and the amount of which determines the intelligence of an iNFT. ALI is an ERC20 token that was created to regulate, incentivize and reward users of the iNFT protocol. Some of the uses of ALI tokens. Image source: Alethea.ai

ALI was launched in December 2021 in a successful auction sale that raised $12.4 million. Its total supply is capped at 10 billion tokens. According to the token distribution chart, at least 37% of the supply will be used for ecosystem development. The rest of the tokens are held in reserves, and are set aside for marketing, private sales, the treasury and Alethea’s team. Alethea has a transparency page containing the ETH addresses for all of its token reserves. 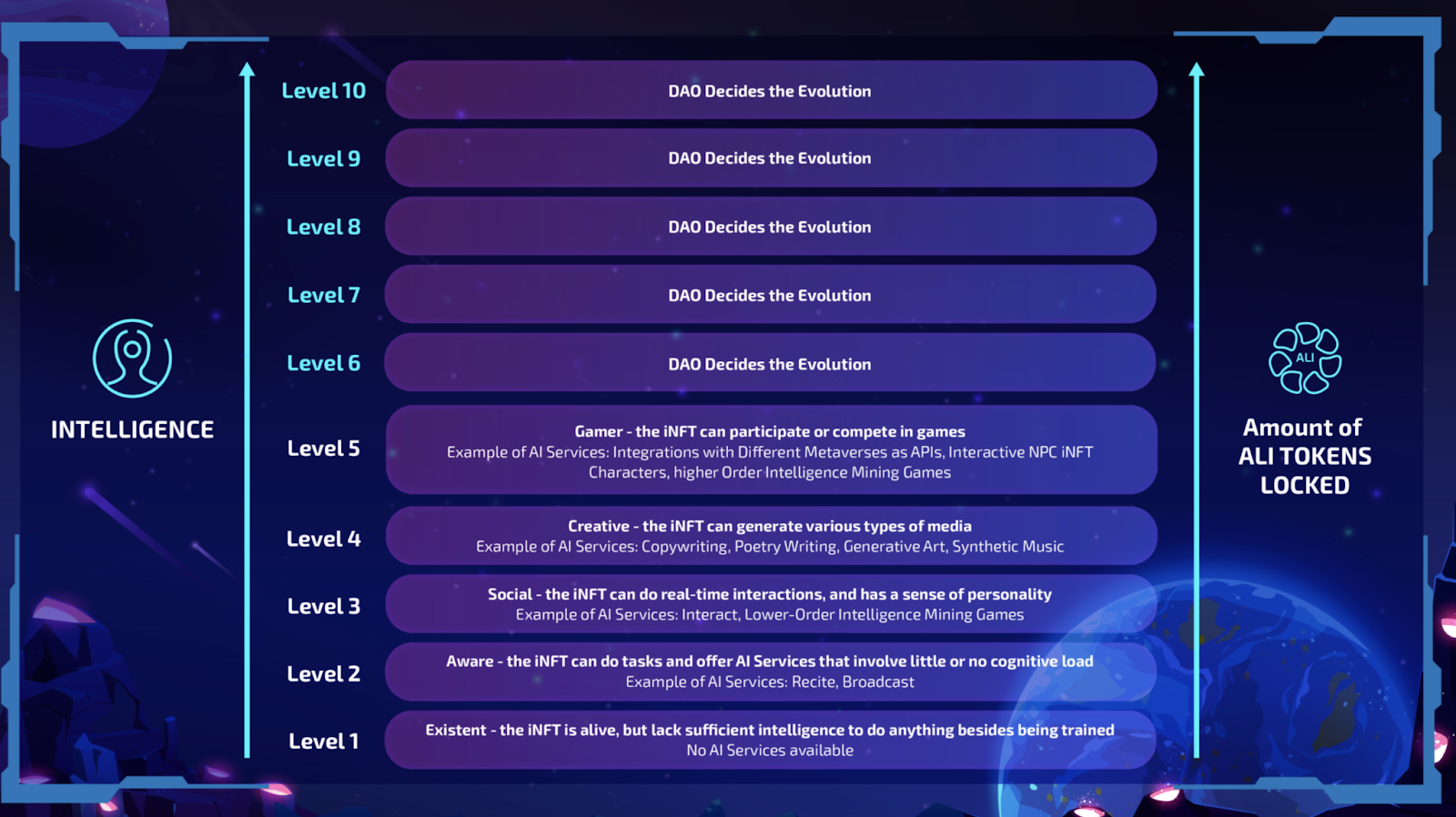 The Alethea AI protocol has a train-to-earn model which enables iNFTs to kick-start their evolution and achieve a cycle of ever-improving intelligence. After iNFTs reach a certain intelligence level, they can train their intelligence to earn more ALI tokens. Training can occur by unlocking and offering more AI services, engaging in more experiences, learning from others, or participating in intelligence mining games. As an iNFT becomes more capable and refined in its intelligence, so will its chances of earning more rewards.

What Is the Noah’s Ark Intelligent Metaverse About?

Noah’s Ark ties together everything Alethea AI is trying to accomplish. It features a variety of proprietary and state-of-the-art AI models, including the Artificial Liquid Intelligence (ALI) engine that powers the Noah’s Ark intelligent metaverse. It also offers various off-chain AI services to iNFTs with varying ALI levels. The Alethea AI team plans to add more AI models to the ALI engine, which in turn will lead to the availability of more AI services for iNFTs.

With each new intelligence level, new AI services are unlocked. iNFTs can choose to utilize these AI services for personal or commercial purposes and earn ALI tokens.

One important point to note is that while the AI services might be the same across various iNFTs, their outputs will be different because of the uniqueness of personality pods. For example, an iNFT of Shakespeare won’t write the same copy as an iNFT of Aristotle does.

If an iNFT earns more intelligence (meaning ALI tokens) through AI services than it consumes, then that iNFT will have a powerful evolutionary advantage over other iNFTs — and will be able to not only offer more AI services, but also enhance its intelligence levels and access even more powerful and unique AI services.

Noah’s Ark will also feature a market built on the iNFT protocol, where users can buy and sell various tokenized assets including personality pods and iNFTs. The marketplace will ease with discovery and provide more contextual information about the assets within Noah’s Ark.

Is Alethea AI a Good Investment?

The future for Alethea AI is promising, as evidenced by its backing from several notable investors, including Mark Cuban, Metapurse, Alameda, Multicoin Capital, and Dapper Labs (the company behind NBA Top Shot). The project managed to raise nearly $17 million through a private token sale.

While Alethea AI does have some serious institutional investors, it’s clearly not a short-term investment. By investing in Alethea AI, you’re committing to investing in the future of the metaverse — and no one can say with absolute certainty what that future is going to look like. Interested investors should do their due diligence before putting down any money.

The Bottom Line on Alethea AI

The merging of AI and NFTs is poised to become the next big thing in the cryptocurrency space. It’s already starting to pick up steam in the NFT avatar and NFT art spaces with the emergence of text-to-art AI algorithms. However, Alethea AI is the first entity to come up with a new standard for building intelligent NFTs with open-ended and temporally consistent AI-generated personalities. Its AI protocol has opened the door for NFT aficionados to be immersed in enjoyable interactive experiences, create rich stories and explore mankind’s collective intelligence.