Lazy Lions NFT Collection: All You Need to Know

Rarely will you find a boring non-fungible token (NFT) project. Most of them provide a unique, versatile and — dare we say — fun way of investing in digital assets. One such project is the Lazy Lions NFT Collection.

In 2021, Lazy Lions leaped into the NFT space and sold out its entire collection within five hours of its launch, making it one of the most popular PFP NFTs at the time.

So, why is the Lazy Lions’ roar one of the loudest in the NFT jungle?

What Are Lazy Lions NFTs?

Lazy Lions is a collection of 10,000 distinctive NFTs built on the Ethereum blockchain. Like Bored Ape Yacht Club NFTs, Lazy Lions NFTs are programmatically generated. They consist of over 160 possible traits unique to each Lazy Lion.

These characters, known as Kings and Queens, are profile picture non-fungible tokens (PFP NFTs) that their owners can use as personalized avatars online.

The fun-loving pride of lions is lazing around on a private island, which is a digital space in The Sandbox metaverse. Their owners can enter this virtual world to hang out and network with other NFT holders.

The driving force for the project is its vibrant community, whose shared vision is to explore the possibilities of web3 through the metaverse.

Some benefits of being a Lazy Lions NFT holder include full commercial rights to the NFT, monthly rewards (ROARwards) for being active in the community and eligibility for airdrops. 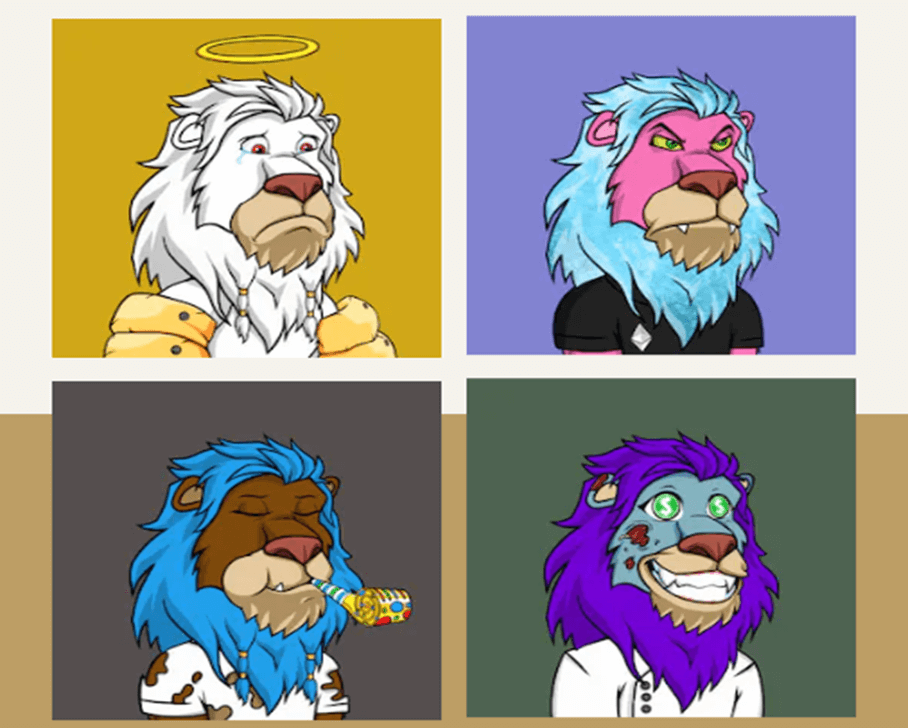 Lazy Lions was developed by Blockchain Media Pty Ltd, whose current CEO and co-founder goes by the online handle of Ashur. Other co-founders include Anlion, Nine and Nin L. (also using their online handles).

The backstory of the Lazy Lions is also part of its uniqueness. The four friends from Sydney, Australia dug into their Assyrian roots during the COVID-19 lockdown to develop the project. Inspired by statues of the Uruk king, Gilgamesh, with a lion firmly held on his left arm, they hoped their NFTs would be as majestic as a lion.

The versatile traits of each Lazy Lion were meticulously designed by a pseudonymous artist known only as Rizzio.eth (or RIZZIO).

How Much Does a Lazy Lions NFT Cost?

All the Lazy Lions from the initial sale were sold out within five hours of its launch on August 7, 2021. However, you can buy these NFTs on OpenSea, a leading NFT marketplace. At launch, the mint price was 0.05 ETH ($150 at that time).

The current floor price of a Lazy Lion NFT (as of September 2022) is 0.48 ETH. Since their launch, the Lazy Lions have amassed a cumulative trading volume of around $99 million.

The price of a Lazy Lion NFT varies depending on the traits. Some of the lions have rare attributes, such as pink fur, which drives their price up. However, the most expensive Lazy Lion NFT was a simple lion cub, #678, which sold for 99 ETH ($299.21K at the time of the sale in October 2021).

Should You Buy a Lazy Lions NFT?

While not exactly a blue-chip NFT, the creators of Lazy Lions are doing everything they can to transform it into a truly exclusive investment, structuring the project in a way that will attract and retain NFT lovers right from the start.

The Lazy Lions community has remained one of its primary strengths. By owning a Lazy Lion NFT, you get access to a roaring NFT community that’s always interacting and networking. Being active in this community earns you rewards paid in ETH.

As a Lazy Lion owner, you’ll also gain from future developments on the project. Case in point: When the team launched its Lazy Lions Bungalows NFT, Lazy Lions holders at the time received a free Lazy Bungalow. Lazy Bungalows are also available for trading on OpenSea.

The project has also added value to its brand through strategic partnerships and is already working with Puma, Chainlink, Polygon and The Sandbox to ensure value for its community.

What Are Lazy Cubs?

The Lazy Cubs NFT collection has a max supply of 22,000 unique cubs. Existing Lazy Lion NFT holders were airdropped a Lazy Drink NFT, while the remaining 12,000 Lazy Cubs NFTs were made available through a public sale launched on May 18, 2022.

The Lazy Cubs collection has sold out, but is available for secondary trading on OpenSea, LooksRare and Nifty Gateway.

Some of the benefits of owning Lazy Cubs include:

In January 2022, the Lazy Lions released its road map for the year. However, they’ve opted to use art to illustrate various milestones.

Upon queries from its community, the team cited specific NDAs and front-run concerns as some of the reasons for the largely concealed road map.

That said, the team releases regular updates on Medium to keep its community posted and up-to-date about the project.

Check out other NFT projects on Bybit NFT Marketplace now