The metaverse has been one of the hottest topics in the crypto community and the world in 2022. Not only did Facebook change its company name to Meta, but billions are being poured into the metaverse by celebrities and forward thinkers around the globe. To explore and enjoy this growing decentralized virtual realm, you need lifelike avatars, and Metahero (HERO) is making this possible. In this post, we’ll walk you through the pioneering Metahero project by exploring what it is, how it works, where to buy the HERO token and much more. Let’s dive right in.

Metahero is a blockchain-based platform and deflationary token (HERO) that employs cutting-edge 3D scanning and modeling technology, allowing users to create ultra-realistic 3D avatars and items for integration in the metaverse.

With the decentralized Metahero platform, you can create your very own lifelike virtual 3D avatars and items using advanced 3D scanning technology; and what you create can be integrated across games, VR, social media and more. And if that’s not enough, Metahero’s meta-scanning technology also allows you to create NFTs from real-world collectibles and works of art.

The Metahero project is unique due to its ability to allow any user to create their own digital assets with absolutely zero prior experience in crypto or blockchain technology. The platform’s founder, Robert Gryn, made this possible by teaming up with Wolf Digital World (WDW), which happens to be one of the largest and most advanced 3D scanning companies in the world.

By combining powerful 3D scanning tech with blockchain technology and an innovative deflationary token–based ecosystem, Metahero is able to bring an unparalleled level of reality to the metaverse through the use of NFTs. With this technology, entrepreneurs, artists and gamers can enjoy unprecedented access to a future full of endless virtual opportunities.

Needless to say, such technology has catapulted the popularity of the Metahero project in an extremely short amount of time. According to DappRadar, the base market cap of virtual worlds is growing by 175 percent month after month. With its groundbreaking technology and partnerships with WDW, Sony and Bloktopia, Metahero is positioning itself to get a share of this pot. In fact, since its launch, the token’s value has increased tenfold.

How Does Metahero Work?

As you now know, the fundamental technology and driving force behind Metahero is 3D scanning, which gathers image data of real-world objects and digitally renders it. The platform is able to achieve this by partnering with WDW, whose state-of-the-art tech is being used in sectors such as gaming to provide users with robust 3D scanning capabilities.

The Metahero technology acts as a gateway linking the physical world to the virtual world of the metaverse. To access the online scanner and gain entry to one of Metahero’s cutting-edge meta-scanning chambers, you must first download the Metahero app and obtain a certain number of HERO tokens.

Diving further into Metahero and how this technology works, it’s important to note the Metahero project is built on the Binance Smart Chain and a smart contract–enabled platform used for DApp development. This allows Metahero to combine NFT smart contracts and 3D scanning to generate completely custom meta-avatars and items.

You can also leverage your avatars in games and other DApps through the WDW and the recently released Metahero NFT marketplace. In addition, you can monetize your avatars and earn HERO tokens by using the Metahero marketplace and its tools to create NFTs. With Metahero’s technology, users have the ability to transform virtually anything into an ultra-realistic NFT.

The platform can also instantly monetize any Metahero NFT and house it on its blockchain in an unchangeable manner. As part of a token-based ecosystem, the platform and marketplace also provide innovators and businesses with access to a bevy of smart contract-based opportunities.

From an advanced 3D meta scanner to 3D avatars and smart staking, Metahero is chock-full of features designed to maximize enjoyment of the metaverse and long-term investor returns. Let’s take a closer look at each of these features and more.

Metahero’s 3D meta scanner serves as a bridge between the digital and physical worlds. With 16 mobile columns (each with four cameras and a server unit), full simultaneous synchronization and the ability to take photogram measurements in 1/120 of a second, it can scan any real-world object or person for use in the virtual world. From this partnership with WDW, scanned objects and persons can be made into extremely realistic 3D avatars and used in video games and a host of virtual platforms via special 3D chambers and the HERO token.

The 3D scanners are installed at various locations around the world, giving almost everyone access to cutting-edge technology specially designed for creating avatars to use in the metaverse. Besides being able to put your face in 3D on playable characters when gaming, items such as art and other collectibles can also be scanned in 3D and brought into the digital world. While scans can be paid for with the HERO deflationary token, if you’re invited to scan, you might be given HERO as incentive for giving the tech a try.

As we just mentioned, scanning art and collectibles in 3D NFT is similar to scanning people for 3D avatars. However, Metahero can also search for images to scan. You would then pay for the scans using HERO to create NFTs and crypto assets. You can register for 3D scanning at the WDW marketplace, which we’ll go over next. After registering, you’ll receive a notification letting you know the location of the nearest available scanner.

The WDW marketplace is an innovative interface for everything 3D related. It’s where you can add items such as clothing, jewelry and more to your 3D avatar, and create a unique appearance that’s ready to rock the virtual world. However, the WDW marketplace doesn’t scan only people and 3D avatars. It has also been used by a laundry list of large companies, such as Disney, Ferrari, Toyota and Heineken, for the completion of 3D projects.

The HERO app plays an important role in the Metahero experience, and is being developed in stages. The first rendition has already been released, giving users the ability to track the stats of their HERO tokens. The next version will integrate WDW, and subsequent releases will create a single place within the app for users to track all of their crypto assets and utilize the ecosystem to its full potential.

The app also features a HERO exchange plan that permits you to directly purchase HERO tokens. In addition to greater token recognition, this also provides an easier way to invest in HERO crypto assets, as well as a lower barrier to entry for those looking to make use of Metahero’s 3D scanning technology and customize their virtual experiences. A VISA card has also been added, so you can use the app to pay for expenses in everyday life with the HERO token just as you can with BTC or ETH.

In a nutshell, the app serves as the entry point into the continuously developing Metahero ecosystem. It’s also a one-stop shop for accessing everything HERO related. With the HERO app, you can:

• Pay for scans with HERO at any 3D chamber location

• Monitor all HERO stats from a single place

• Break down statistics on the granular level

As a passive reward for HERO holders, 0 to 2 percent of each transaction is equally divided and distributed among all token holders. While HERO can be transferred and sold with zero fees, this feature incentivizes users to hold HERO for both the short- and long-term.

At the same time, 0 to 2 percent of each HERO transaction is burned to limit the supply of HERO and maintain or increase its value. After being burned, the Binance Coin (BNB) is used to buy back and burn additional HERO tokens whenever liquidity exceeds $10 million.

Use Cases of Metahero

The team members behind the Metahero project have been working hard to deliver products, features and overall value ever since its launch in July of 2021. Thanks to their partnership with WDW, they were able to release their meta-scanner tech at the Facebook Summit in Q4 of last year. They’ve also worked on growing the team, redesigning the website and expanding the global Metahero community.

In Q1 2022, partnerships were planned for studio, game and 3D NFT marketplace development. During this time, partnerships with artists and influencers were also prioritized along with the onboarding of strategic investors.

The milestones of Q1 2022, such as adding multi-language support and expanding global presence, were completed ahead of schedule. The installation of the first public meta-scanner chamber has also been installed.

From this point forward, Metahero plans to further expand its global presence by opening even more scanning chambers, growing its user base and making itself a ubiquitous presence in the virtual world of the metaverse. 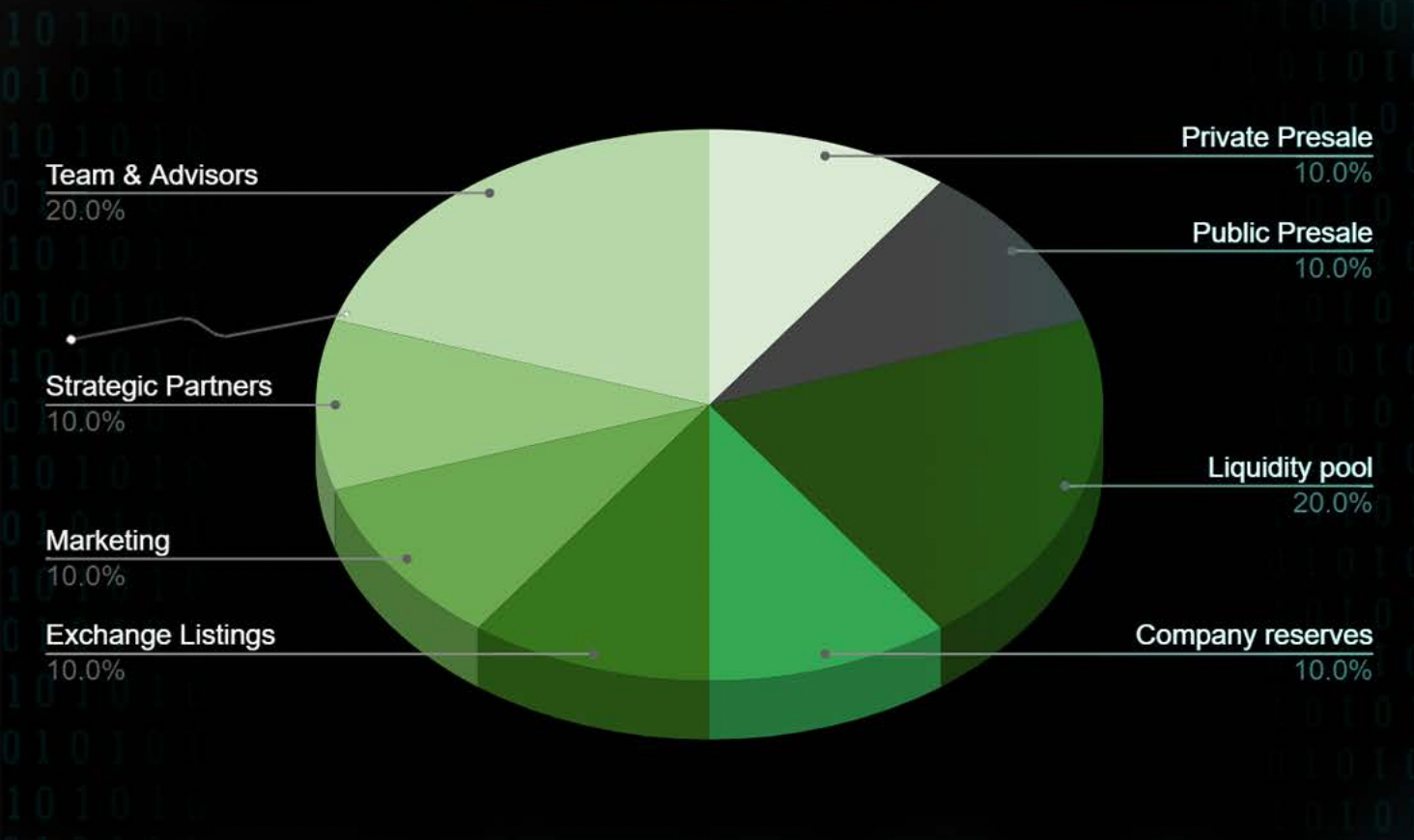 A max supply of 10 billion HERO tokens is allocated thusly:

According to a Global Market Estimates report, the global metaverse market is expected to experience an annual growth rate of over 45 percent. Therefore, the price of Metahero is extremely likely to increase along the same lines.

Crypto Academy predicts HERO will reach $1 in 2023 or 2024. Considering a total supply of 10 billion HERO, a $1 price point would give Metahero a whopping $10 billion market cap. However, since some predict HERO to surge upward of $10 in the next five years, its market cap could be 10 times as high, reaching $100 billion by 2027.

With the potential of Metahero and the continuing adoption of crypto assets, these figures are very real and certainly attainable.

Where to Buy HERO

If you’re looking to purchase HERO tokens, you can do so at several exchanges, including Bybit.

To buy, trade or HODL HERO on the popular Bybit platform, you first need to sign up for an account. Then you complete a short and simple KYC verification process prior to depositing funds. In most cases, the verification and approval process takes less than 24 hours.

After the KYC verification process, you’ll be prompted to add your payment method. You can either buy BTC, ETH or another cryptocurrency — or you can use a bank transfer or debit/credit card, whichever you prefer.

Once your account is created and funded, you can then spot trade HERO or purchase the deflationary token to hold long-term.

Is HERO a Good Investment?

When deciding whether to invest in a cryptocurrency, consider a variety of factors. For example, HERO’s utility is top-notch, and the demand for HERO tokens will only rise as it approaches wider adoption.

HERO is also being offered on more and more exchanges, such as Bybit, which means more and more people will have access to it. The company behind the token has also made it a priority to continue establishing new partnerships with crypto influencers and institutional investors, which should further drive up both demand and price.

Furthermore, HERO’s connection to DOME is also key, as the two are linked and enjoy a mutually beneficial relationship. Everdome is seeking to become the go-to platform for experiencing the metaverse, and HERO HODLers get to enjoy discounts on virtual land in the Everdome metaverse. Needless to say, the continued rise of Everdome will further contribute to the success of HERO.

Despite seeing a short-term price drop in recent weeks, HERO is turning toward the upside, so it’s a prime buying opportunity for investors interested in making substantial long-term profits.

With the skyrocketing popularity of the metaverse, personal avatars, digital art and other unique virtual assets are already in strong demand. Metahero aims to make the creation of these NFTs easier than ever before, giving its HERO token the potential to become increasingly valuable and one of the most popular in this space. With cutting-edge technology and dynamic partnerships in place, Metahero is bringing a level of realism to the metaverse that no other platform can match.