Judging from the popularity of films like Star Wars and events like the 1969 moon landing, it’s clear that humanity is fascinated with outer space exploration. In the realm of video games, this also rings true, as titles like No Man’s Sky and EVE Online are beloved among critics and users. With this in mind, it’s no wonder that crypto projects like Imperium Empires have popped up to take advantage of this interest in all things extraterrestrial. Pegged as the world’s first AAA GameFi 2.0 space metaverse game, Imperium Empires is set to change the way gamers perceive play-to-earn games.

Wondering how this GameFi project intends to distinguish itself from the pack? Read on as we cover the ins and outs of Imperium Empires, along with its much-talked about deflationary tokenomics for IME tokens.

What Is Imperium Empires?

GameFi can be a tricky field to navigate. Although it’s an exciting new prospect that intends to let players profit from play-to-earn NFT games, plenty of tentative projects now flood the space with generic premises and unsustainable tokenomics. This can ultimately make the GameFi scene seem saturated, with run-of-the-mill games lacking fun and future DeFi developments. With this in mind, Imperium Empires seeks to break this trend by mindfully targeting these problems and breathing new life into the GameFi project space.

As a quality MMORTS focused on fun and fair play-to-earn mechanics, Imperium Empires differentiates itself in four main ways:

First, the game promises AAA production levels, as it’s backed by a talented team of developers and professionals who have prior experience with gaming giants like Animoca Brands and Tencent. With a veteran team on deck, the game promises to deliver on the fun aspect — so players aren’t just going through the motions while profiting from the GameFi mechanics. If you’ve played megahits like Clash of Clans and Kingdom Wars, you’ll certainly love the polished gameplay and stylized graphics Imperium Empires offers.

Tired of seeing NFT marketplaces flooded with NFTs — and your NFTs lose their value as more players stream into the game? With Imperium Empires, NFT spaceships in combat can be damaged or permanently destroyed in the game’s high-stakes player-vs-player (PvP) zones. Thanks to this unique NFT burn mechanic, the supply of NFTs in the game can be kept more consistent, even when a large influx of new players join the fray.

While most NFT games promise DeFi integration, it’s often too convoluted and features only simple staking. To bolster DeFi adoption for the 3 billion gamers worldwide, Imperium Empires has formed strategic partnerships with prominent DeFi protocols on the Avalanche network to gamify DeFi, like Trader Joe, BENQI and Yield Yak. This lets players use and benefit from DeFi without going through the deep learning curve of concepts like liquidity mining and yield farming, therefore lowering the DeFi entry barrier for gamers. Additionally, there’ll be limited edition, themed spaceship NFTs available, thanks to these partnerships, so you can look out for Trader Joe’s spaceships and BENQI guilds in the near future.

Lastly, Imperium Empires takes a page from popular MMO titles like World of Warcraft and places an emphasis on the social benefits of gaming together. While MMO games often encourage grinding for resources, this experience is certainly made better with friends and like-minded players. Each guild will own or lease land on which they can build their starbases, refineries and other structures to support their members. By making guilds central to the gameplay of Imperium Empires, it makes players much more sticky to the game since they’ve developed personal connections among guild members, who supported one another in the epic PvP guild wars.

As an ambitious AAA metaverse game, Imperium Empires instantly stands out from the crowd of click-to-earn blockchain games, thanks to its fun and challenging space combat. If you’re new to real-time strategy and space combat games, no worries – Imperium Empires eases beginners into the game by starting everyone in the Safe Zone. This is where players can enjoy the combat mechanics of the game in player-vs.-environment (PvE) encounters without stressing out over losing their spaceships. A simple repair can fix disabled spaceships, making the Safe Zone ideal for those looking to learn the ropes and play the game at low stakes.

Looking to up the ante? Give the Combat Zone a shot, as spaceship components can be destroyed, making defeat more costly in this area. This risk is accompanied by greater play-to-earn rewards as players engage in PvP combat. The War Zone is where players will want to end up if they’re hunting for the best rewards, as spaceships and components can be permanently destroyed. On top of receiving unique resources, players are also encouraged to loot destroyed spaceships for extra rewards. With these three separate zones, players of all skill levels are welcome to explore which area suits their skills best.

Other than high-stakes PvP battles, the PvE side of Imperium Empires also provides fun and relaxing gameplay, e.g. asteroids mining. With many asteroids scattered across various zones, players can mine them for ores, transport the ores to the refineries, and either sell the refined ores for play-to-earn rewards or contribute them to their guilds for building and upgrading guild structures.

What Are IME and IMC Tokens?

IME token acts as Imperium Empires’ governance token, and is the premium currency that can only be earned through seasonal tournament rewards and selling of components from looted spaceships. With it, players can purchase exclusive NFTs and stake their IME tokens to level up their guild. 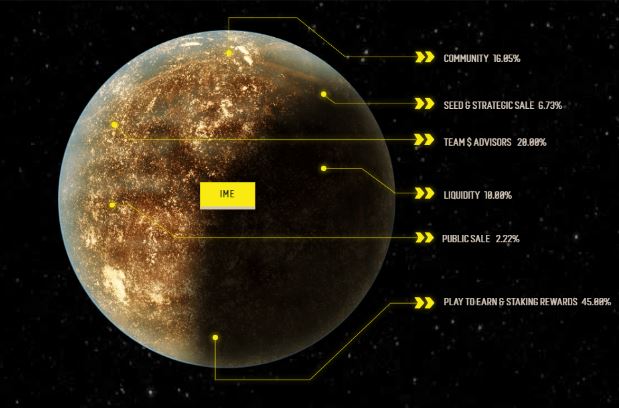 With regard to the amount of IME tokens, there’s a maximum supply of ten billion. Although this amount might seem alarming enough to raise fears of hyperinflation, the Imperium Empires team is already one step ahead with its anti-inflationary mechanics. As NFT spaceships and components purchased with IME tokens can be destroyed in high-risk zones, this essentially balances out the 45% of IME tokens given out as play-to-earn and staking rewards, which are also gradually distributed to players over a very long time. Similarly, IMC tokens are also used to repair damaged NFT components and spaceships. This can be used to lower the amount of IMC tokens on the market, despite its virtually unlimited supply.

Keen IME token investors can check out the Bybit Launchpool, where 13.5 million IME tokens can be earned through staking BitDAO (BIT) tokens after signing up on Bybit.

Are IME Tokens a Good Investment?

By offering cutting-edge graphics and extensive DeFi mechanics, Imperium Empires is far from your run-of-the-mill crypto project. Add to this formula an exciting space setting and fun real-time strategy gameplay, and we think this puts Imperium Empires ahead of other NFT games.

To reinforce the claim of IME tokens being a good investment for the long haul, we can simply look at the progress the team has made in garnering interest for Imperium Empires. All of the 16,850 genesis NFT spaceships have been sold out, with more than 5,000 unique users logged in to their NFT minting site. This is ahead of the official game launch, meaning we can expect more users to stream in once other gamification aspects and integration with DeFi protocols go live.

Overall, we’re certain that IME tokens are a good investment in the long run, as they push the boundaries of what to expect from NFT games. This allows Imperium Empires to distinguish itself from other fantasy metaverse games, and to thrive in its own niche. The Imperium Empires team also shows its experience in managing gaming communities, as they’re transparent with their announcements — and on the ball for regularly updating users as to what they’re working on next. It’s ultimately this combination that makes us and many other players bullish on the future prospects of Imperium Empires.