Star Atlas, the next-gen gaming metaverse, has caught the attention of gamers and crypto enthusiasts worldwide.

More than just a video game, Star Atlas comprises an entire metaverse of NFT assets, of which you’ll have full ownership. Moreover, your rights will be secure on the Solana blockchain.

While many people are thrilled about this game, others are erring on the side of caution. But is being cautious the best move? And is Star Atlas a good investment option or just a come-on?

Keep reading and find out what the future holds for Star Atlas.

What Is Star Atlas?

Star Atlas is a decentralized metaverse game with a space combat and exploration theme. It lives on the Solana blockchain and features activities such as alien races, political domination, space cities and territorial conquest.

Star Atlas uses Unreal Engine 5 to produce cutting-edge real-time graphics. You can even play in VR for a truly immersive experience. At Star Atlas, as you revel in the incredible cinematic-quality visuals, you’ll manually pilot your own state-of-the-art spaceship to explore the macrocosm, and search for assets to mine and trade.

In the Star Atlas role-playing game, you can participate in battles to earn crypto. There are also fun mini-games to play, such as spaceship racing, to earn more rewards.

Set in the year 2620, Star Atlas combines four genres for a stimulating experience:

Other activities include building lands and cities, selling merchandise, and creating factions and regional DAOs to rule the various institutions in the universe.

Sometimes you’ll play defense to protect your territories, while other times you’ll create offensive strategies to expand your regions in the Star Atlas universe.

Since the game is decentralized, you can also vote on governance issues via the Star Atlas DAO, if you own POLIS (the governance token).

That way, you’ll have a say in gameplay decisions, in addition to playing them. For that, you have to connect a wallet (preferably a Phantom wallet), lock your tokens, and earn voting rights.

Before you embark on your intergalactic journey, you have to choose to be a part of one of three factions:

At the time of writing this article (Sept. 19, 2022), Star Atlas hasn’t been released, but we’ve seen what the developers have shared on their official social media channels.

The company behind Star Atlas has launched an NFT marketplace for trading in-game NFTs or assets. You have to buy NFTs, such as ships and ammunition, with the ATLAS token, or earn them by completing activities in the game.

The Star Atlas universe has two tokens, ATLAS and POLIS, which mimic a real-world economy. You can buy these assets from cryptocurrency exchanges such as Serum DEX.

ATLAS is the in-game currency you use to trade NFTs and purchase assets. You can earn the token by completing in-game challenges.

ATLAS has a current total and max supply of 36 billion, but it’s an inflationary token that matches the game’s growth. With more players joining the metaverse, more ATLAS will be created and distributed as rewards. Here’s an overview of the distribution of current ATLAS: 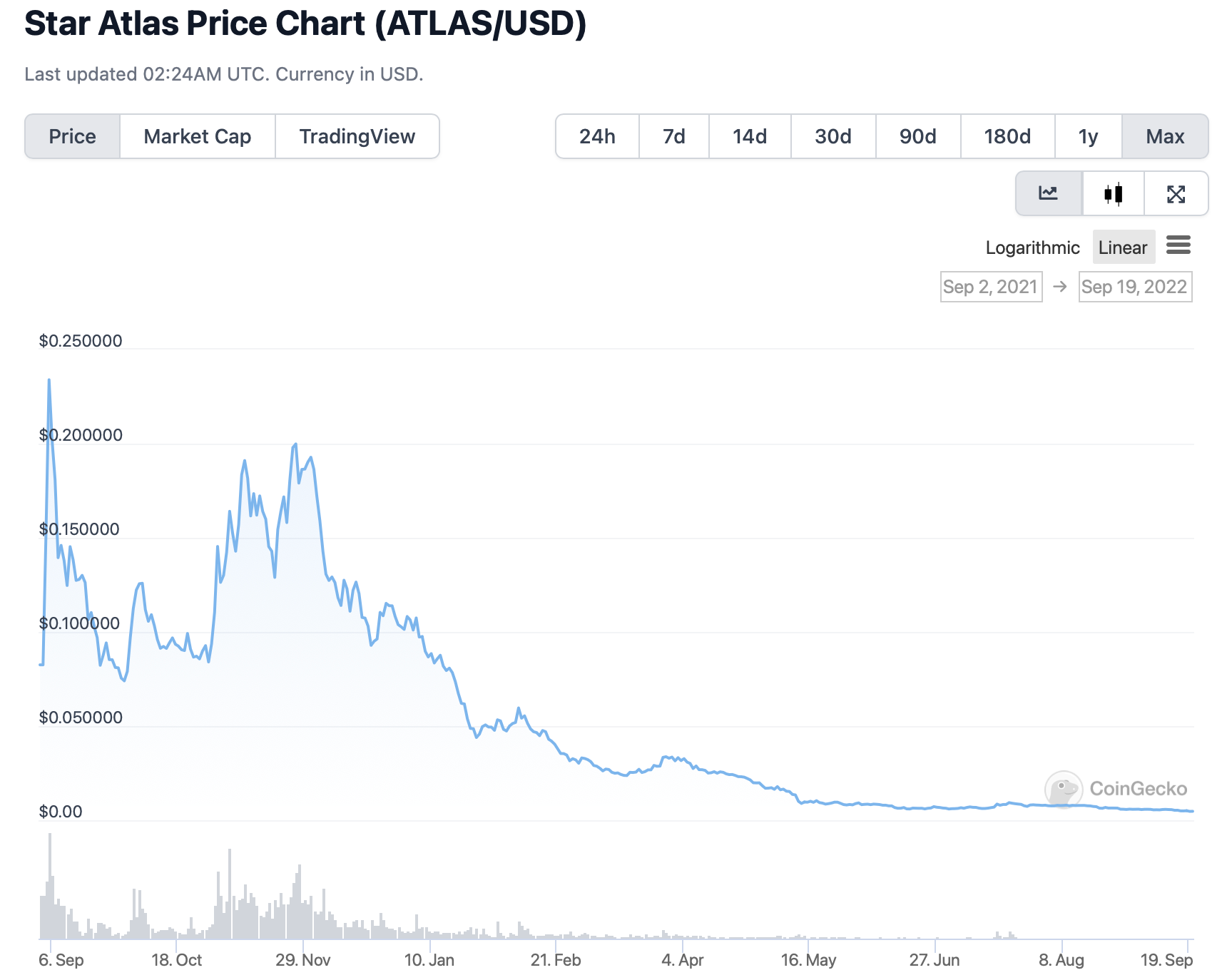 POLIS is the governance token of Star Atlas. It not only gives you political influence within the Star Atlas metaverse, but also the right to vote for changes to the game in the long run.

POLIS has a fixed maximum and total supply of 360 million tokens. It’s earned through missions and guild participation within the game, and staking on the Star Atlas DAO.

Here’s an overview of the distribution of POLIS: 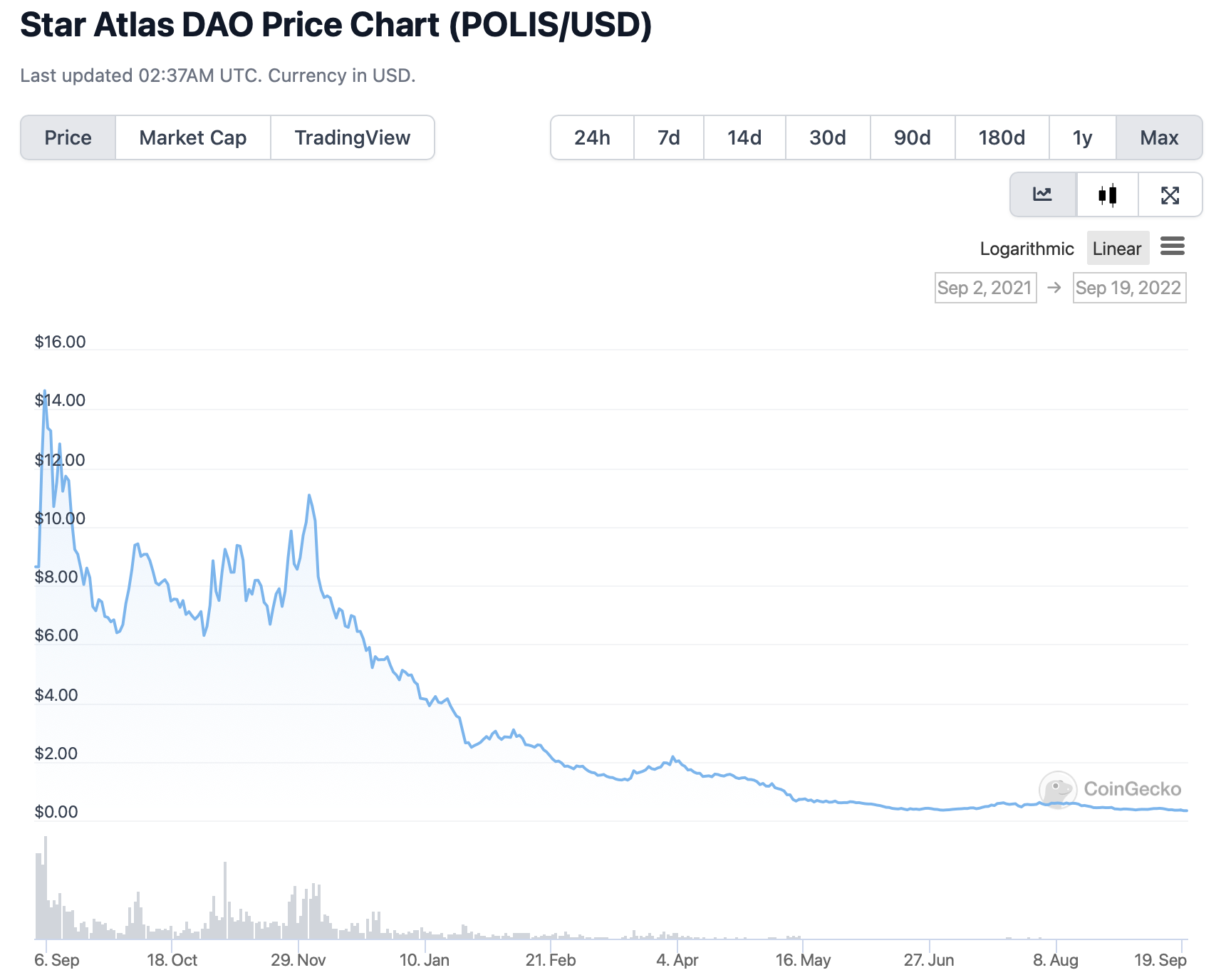 The complete Star Atlas metaverse hasn’t been released to date (Sept. 19, 2022), and it won’t be released for some time. But the project has been selling NFTs and securing funding for over a year. The current collective market cap of both tokens is close to $18 million.

Ever since the release of its browser-based game, SCORE, in December 2021, there’s been a lack of sufficient progress and insights into the project’s development. It’s made people skeptical about the project and fearful that it might be a rug pull scam.

Nevertheless, Star Atlas’s recent partnership with The Sandbox, in which players could participate in a contest to create their own Star Atlas NFTs in June 2022, has helped to renew some confidence in the project for now.

ATLAS gives you property rights in the Star Atlas universe and full ownership of assets, which might be quite valuable once the gameplay rolls out.

That’s why DigitalCoinPrice predicts a bullish market for ATLAS over the next few years, with expectations that its price will rise to approximately $0.0188 by 2025, and average around $0.0648 by 2030.

Similarly, PricePrediction anticipates the Star Atlas price will rise to approximately $0.011 by 2025 and cross the 1-cent mark by 2030.

However, not all experts are bullish about this token. WalletInvestor forecasts price drops over the next five years, and estimates the Star Atlas price to be around $0.0003 in 2027.

POLIS is valuable because it gives you the power to vote for local laws and major decisions in the future about the Star Atlas universe.

Meanwhile, the WalletInvestor team, while not as bearish in its forecast as it is for ATLAS, expects the POLIS price to be relatively volatile, predicting it to go as low as $0.000001, with highs that could reach above $10 in 2025.

Star Atlas could be a game changer (excuse the pun) because it blends the traditional concepts of video gaming and GameFi with ultra-realistic graphics to create a truly immersive and addictive experience.

That said, while Star Atlas is undoubtedly an ambitious project, with tremendous potential to change the landscape of video games in the future, we have yet to see the results. Thus, it’s imperative to be careful before investing in it and to always do your own research before investing.