What Is Floki Inu: More Than a Musk-Inspired Meme Coin

In June 2021, Elon Musk tweeted that he would be naming his pet Shiba Inu “Floki.” This led to the birth of the Floki Inu coin. Floki Inu, now known simply as Floki, may have had its beginnings as a dog-memed currency, much like Dogecoin, but a closer look reveals that it’s so much more than that.

Floki follows in the footsteps of Shiba Inu in giving utility and even charity to its ecosystem. Its creators see it as a movement, rather than just a meme coin. It holds a vision of building schools in less developed countries, and has also partnered with the Million Gardens Movement, a gardening campaign founded by Elon Musk’s brother, Kimbal Musk. The ingenious combination of meme movement and charitable actions has earned Floki recognition by NASDAQ as one of the best metaverse currencies to buy in 2022.

What Is the Floki Inu Token (FLOKI)?

FLOKI is an ERC-20 and BEP-20 compliant token. This means that it’s a multi-chain coin that runs on both the Ethereum and Binance Smart Chain (BSC) blockchains. Users can easily perform a 1:1 FLOKI swap on the ETH-BSC bridge via atomic swap.

Interestingly, there’s a 3% tax on the buying and selling of the Floki token (FLOKI), which doesn’t apply to the bridging of the tokens between the two networks. Floki Inu maintains that the tax goes to the Floki Inu treasury. The treasury funds are used to develop their ecosystem, as well as promote FLOKI for wider adoption. The white paper does highlight, however, that the tax will be lowered once Floki Inu has amassed sufficient funds, though there’s no specific mention of their target, or by how much the fee will be lowered. 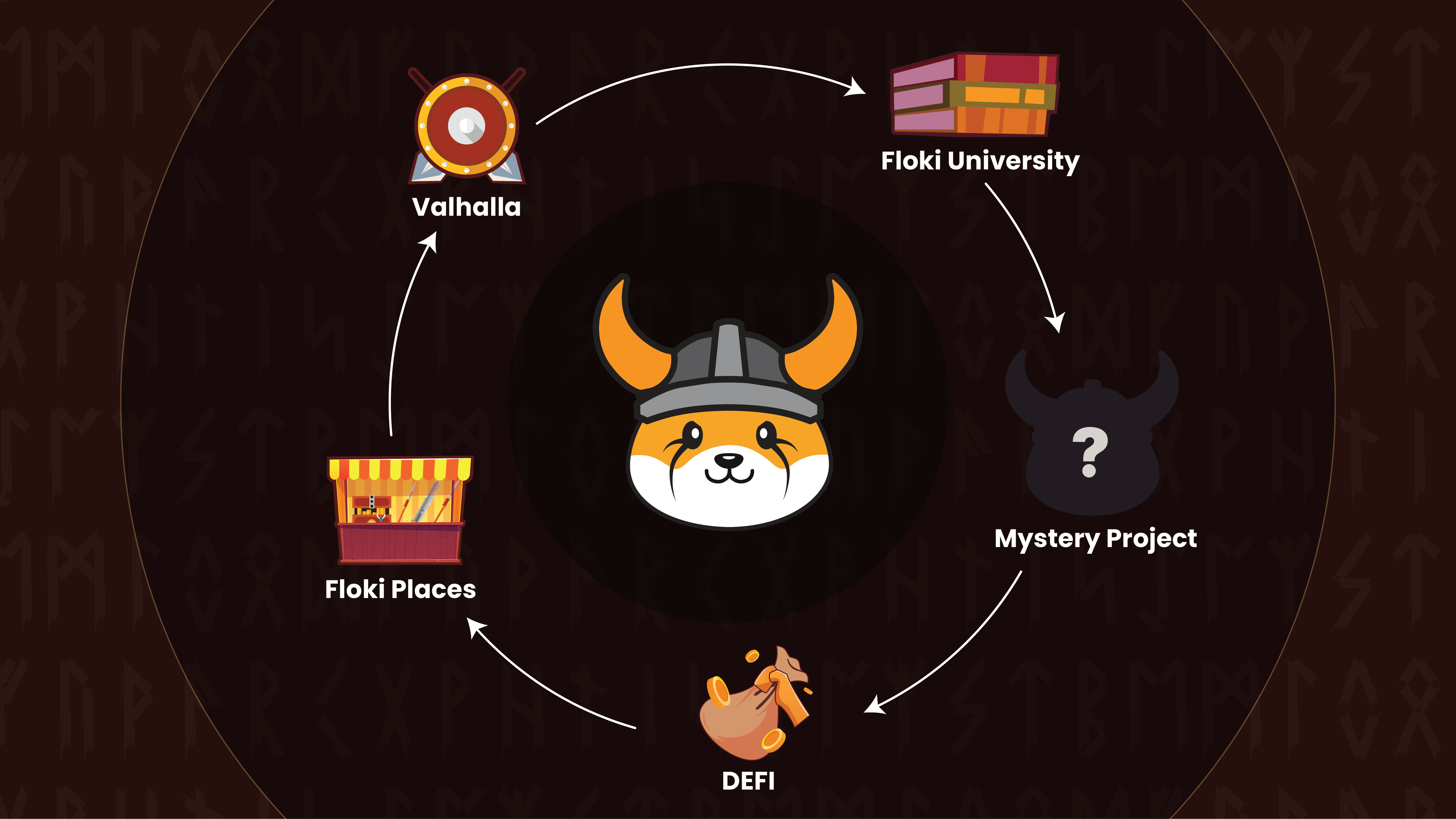 With the NFT gaming metaverse all the rage, it’s no surprise that Floki Inu has its own NFT metaverse game called Valhalla (the “heaven” for Vikings when they die). Valhalla is a play-to-earn game with rewards distributed based on participation, and gamers have full ownership of the FLOKI tokens earned in the game. FLOKI tokens serve as the in-game currency, and can be used to purchase assets in the game.

Through the use of a smart contract, Floki Inu has integrated Chainlink price feeds into its network. This has enabled Floki to offer financial services via two DeFi platforms, Inverse Finance and BarnBridge.

With the boom in NFTs, Floki Inu intends to expand beyond Valhalla with an NFT and merchandise marketplace. The FlokiPlaces NFT and Merchandise Marketplace would foster the buying and selling of NFTs and other digital products. Beyond entering the NFT space, this move looks to establish Floki as a payment alternative to Bitcoin, Dogecoin — and even the U.S. dollar.

Floki Inu also aims to educate the ever-growing audience on crypto through its uniquely constructed metaverse university, while boosting awareness of the Floki Inu ecosystem. While most of the curriculum will be free to all to drive the learning of crypto worldwide, certain specialty courses might require the use of FLOKI tokens.

What Can FLOKI Be Used For?

Most meme coins have no real use cases, as they’re very speculative in nature. FLOKI seems to be a little bit different from other meme coins. Firstly, within the Floki Inu ecosystem itself, NFTs and metaverse gaming are a high-potential opportunity for the token. Also, though originally created to exist only within the Floki Inu ecosystem, FLOKI may now offer real-world utility.

Floki Inu has partnered with NOWPayments, a cryptocurrency payment gateway that allows businesses to seamlessly accept FLOKI on their websites. You can also use FLOKI to buy physical goods in not just one but two digital marketplaces, CryptoCart and Curate (XCUR).

Its latest project in the making, Project L, slated for release in July 2022, also aims to enhance its utility by making FLOKI more deflationary and expanding its adoption..

Floki Inu has an NFT portal for gifting NFTs to FLOKI VIP holders. These NFTs can also be purchased by any FLOKI holders. Floki currently has two NFT collections in its portal, the Genesis or Diamond Hands NFT collection and the Floki Gemstone Collection. These NFTs are poised to have utility functions in the future as the Floki Inu ecosystem expands.

Note: Figures below are accurate as of this writing (4/7/2022) and are approximated up to two decimal places. 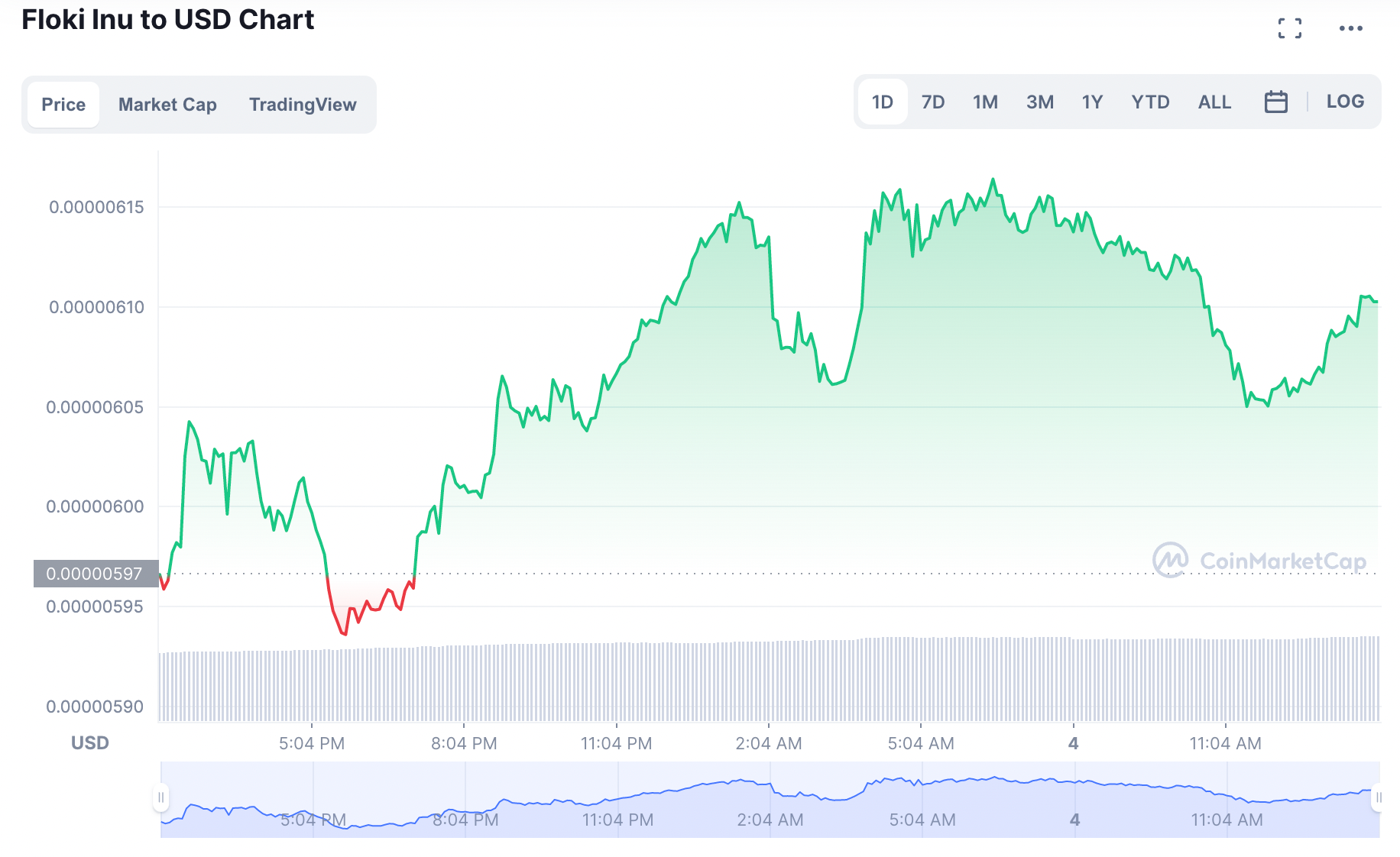 FLOKI is a hyper-deflationary coin with an auto-burn mechanism. Its liquidity has also been locked in both the Ethereum blockchain and BSC blockchain for 265 years each. FLOKI’s maximum supply is set at 10 trillion tokens, with 9 trillion tokens currently circulating on the market.

Adept traders in the market understand that meme coins are highly volatile, so they stay as far away from them as possible. The reason isn’t far-fetched: Meme coins are driven by the community, with no real use cases. Hence, their value can plunge if the community disperses. In Floki Inu's case, however, it’s proved itself to be more than just a meme coin, with growing uses even in the real world.

Yet, it’s highly improbable that Floki Inu will ever reach $0.01, due to the very large supply of FLOKI. But as a hyper-deflationary coin, its demand may rise as its supply falls. That said, it seems to have reached its peak in November 2021 at $0.00003.

Since its price peak, however, its community has only been growing, and Floki is constantly building strong utility and partnerships. Its partners include blockchain security giant CertiK and leading crypto market maker Wintermute. It’s also launched a television campaign in the U.S. and Turkey, as well as partnering with Formula 1 team Alfa Romeo, bolstering its exposure to millions. With such strong strategic allegiances and invested efforts in branding, it may not come as a surprise if Floki Inu reaches another peak in the future.

Both the Floki and Shiba Inu tokens were born from Dogecoin. Alongside other Shiba Inu-inspired tokens, Shiba Inu was created to mirror the successes of Doge while killing off Dogecoin. Very little has been achieved in this regard — but let’s take a look at how the two most popular Shiba Inu tokens compare.

Pros vs. Cons of Floki

How Can I Buy Floki Inu Coins?

There are three ways to purchase FLOKI tokens. You can get it either from a centralized exchange like Huobi, purchase it through a credit card, or on decentralized exchanges (DEXs) like Uniswap and PancakeSwap. But first, you’ll need to buy ETH to be able to trade FLOKI, which you can easily get on Bybit.

Buying FLOKI isn’t a straightforward process on a DEX. It can become tricky for new crypto users. We've simplified the buying process as much as possible, with step-by-step instructions on buying and storing your FLOKI tokens on Uniswap.

After waiting a few seconds, you'll see the number of FLOKI tokens you have on your wallet home screen.

Floki Inu has proven time and again that it’s more than just a meme coin. As a token, FLOKI can already be used not just within the Floki Inu ecosystem, but even out in the real world. Its charitable movement, strong partnerships with leading crypto firms and markets, and extraordinary marketing efforts all accentuate its determination to be a household currency all around the world. As its projects mature and the utility of FLOKI grows, it may just have the potential to outshine all the other dog-themed coins on the market.