Bitcoin Stock Market Correlation: What Do the Charts Say?

The History of Crypto Correlation to the Stock Market

For the first several years of its life, there was almost no correlation between Bitcoin and the S&P 500. Until 2012, Bitcoin prices were very stable, while S&P 500 prices had their usual steady rise with some dips. The very first significant Bitcoin jump, in late 2013 and early 2014, had no corresponding S&P 500 increase. In fact, the stock market dip in late 2016 happened at the same time as a Bitcoin price increase. Bitcoin prices tended to fluctuate rapidly, while S&P 500 price changes were less drastic. Peaks and valleys for Bitcoin and S&P 500 prices showed almost no similarities until 2018 or so.

However, a look at recent Bitcoin vs. stock market charts shows far more correlation. The crypto's value doesn't perfectly mirror the S&P 500 index. However, a comparison of Bitcoin and the S&P 500 does show that there are some relationships. We can tell this by examining how the crypto behaves during volatile S&P price swings.

Over the past four years, Bitcoin has somewhat begun to mimic S&P 500 movements. During the big dips of January 2018, September 2018 and March 2020, Bitcoin prices also dropped. Interestingly, Bitcoin vs. stock market charts show that Bitcoin's drops seem to be even more drastic. While the S&P usually only experiences dips of around 10%, Bitcoin has weathered crashes of over 50%.

In the last three years, there has also been an increased incidence of Bitcoin moving when stocks rise. Overall, the correlation in Bitcoin vs. stock market charts is most drastic when stock prices drop. However, Bitcoin does seem to follow general market trends for stock stability and stock surges. Bitcoin has recently begun to mimic the stock market even more closely. In March, Bitcoin and the S&P 500's 90-day correlation reached record levels. As of 2022, there’s been no sign of a Bitcoin stock market decoupling.

Bitcoin vs. Stock Market Charts: What We Can Observe 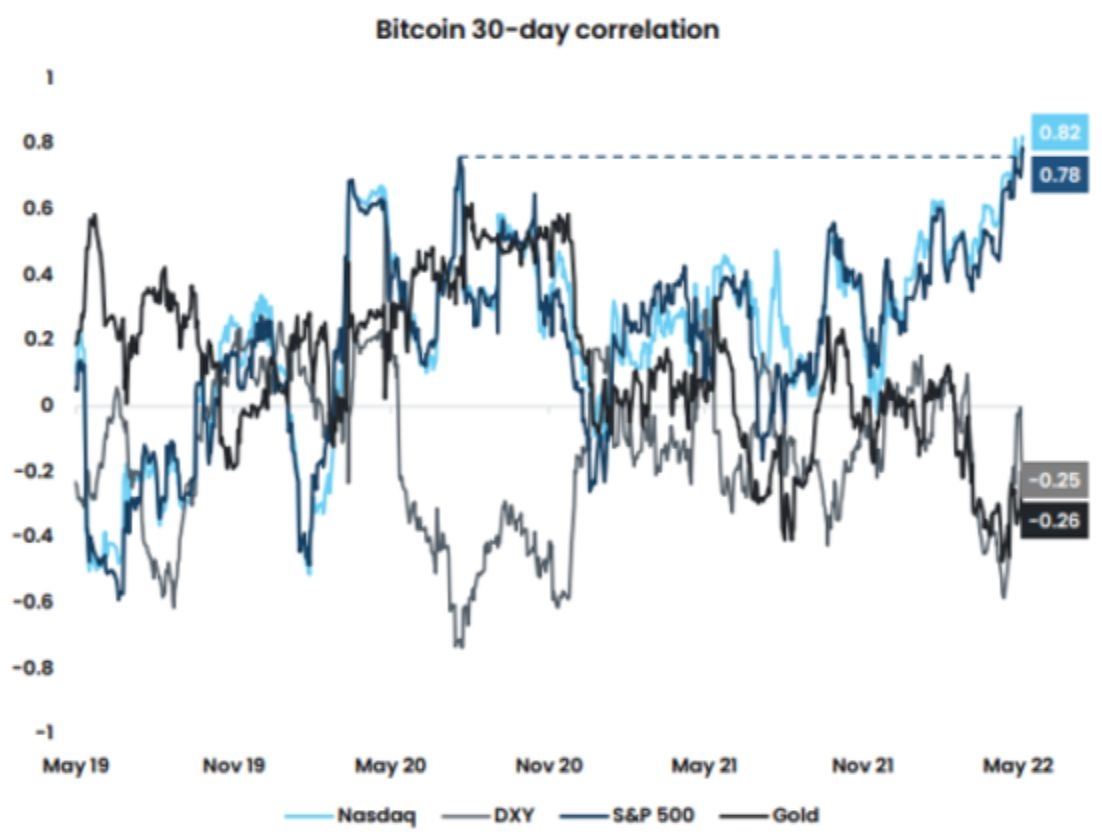 So why are the recent charts still showing so much correlation? The answer appears to lie in the increased connectivity of crypto and stocks. Cryptocurrency is no longer seen as a separate asset, with little reliance on the stock market. Instead, the popularity of crypto has made it very similar to traditional stock holdings. Crypto is no longer a niche asset traded by a few enthusiasts. Instead, it’s now being handled by traditional brokerages and investment institutions.

The same investors tend to invest in both crypto and stocks. Oftentimes, an investment portfolio may include both options. Furthermore, spillover from Bitcoin returns often gets invested in the stock markets, and vice versa. As the Bitcoin correlation to the stock market continues to increase, investors are becoming aware of the similarities — and making even more decisions with the assumption that crypto and stock are identical. Ultimately, the close relationship between stock and crypto investing is causing both markets to mimic each other.

The Benefits and Dangers of High Stock Market Correlation

Though there are some benefits, you don't necessarily need to fear a Bitcoin stock market decoupling, which could actually be good news for investors who want to diversify their portfolios. Having two separate sets of assets that don't drop at the same time is a great way to weather financial crashes. If the Bitcoin stock market decoupling does occur, people may have more opportunities to hedge against a crash.

When dealing with investments, it's important to avoid assuming that correlation = causation. Essentially, the fact that Bitcoin vs. stock market charts look so similar doesn't necessarily mean one market is drastically affecting the other. In some cases, Bitcoin's correlation to the stock market seems to be a coincidence. For example, the March 2019 dip in the stock market was due to increased aluminum tariffs, while the March 2019 dip in Bitcoin was due to international crackdowns on crypto.

However, there’s also a lot of evidence that Bitcoin might be directly influenced by the stock market. Experts have noticed that Bitcoin prices tend to drop when the stock market opens — irrespective of other factors affecting price. Furthermore, Bitcoin's price is heavily affected by general investor confidence, which is why recent Bitcoin crashes tend to come right after stock crashes. Crypto traders who start hearing news about a stock market downturn tend to begin trading conservatively.

Will Bitcoin Decouple From the Stock Market?

If your investment strategy has  focused on Bitcoin following the stock market, you need to be on the lookout for a Bitcoin stock market decoupling. Experts predict that such an event probably won't be happening anytime soon. As more and more people begin to conflate Bitcoin charts and stock market charts, the two assets are even more likely to affect each other. At least a mild correlation to the stock market seems likely to persist for the rest of the year.

That being said, some degree of Bitcoin stock market decoupling does seem inevitable. The main reason is that Bitcoin tends to be a little more volatile. In a sell-off, Bitcoin prices tend to plummet a little more drastically than traditional stocks and recover more sharply. With stock prospects for the latter half of 2022 looking grim, there may be indications that Bitcoin’s value will begin to fluctuate at different rates than those of stocks values.

Bitcoin vs. stock market charts show a strong correlation between the two investment opportunities. Since both markets are becoming increasingly interrelated, it's no surprise that they're similar at the moment. However, experts believe a Bitcoin stock market decoupling will eventually happen. Investors would be wise to exercise caution and to beware assumptions of a continued Bitcoin stock market correlation.