Leading vs. Lagging Indicators: Can They Help Time Your Entry and Exit? 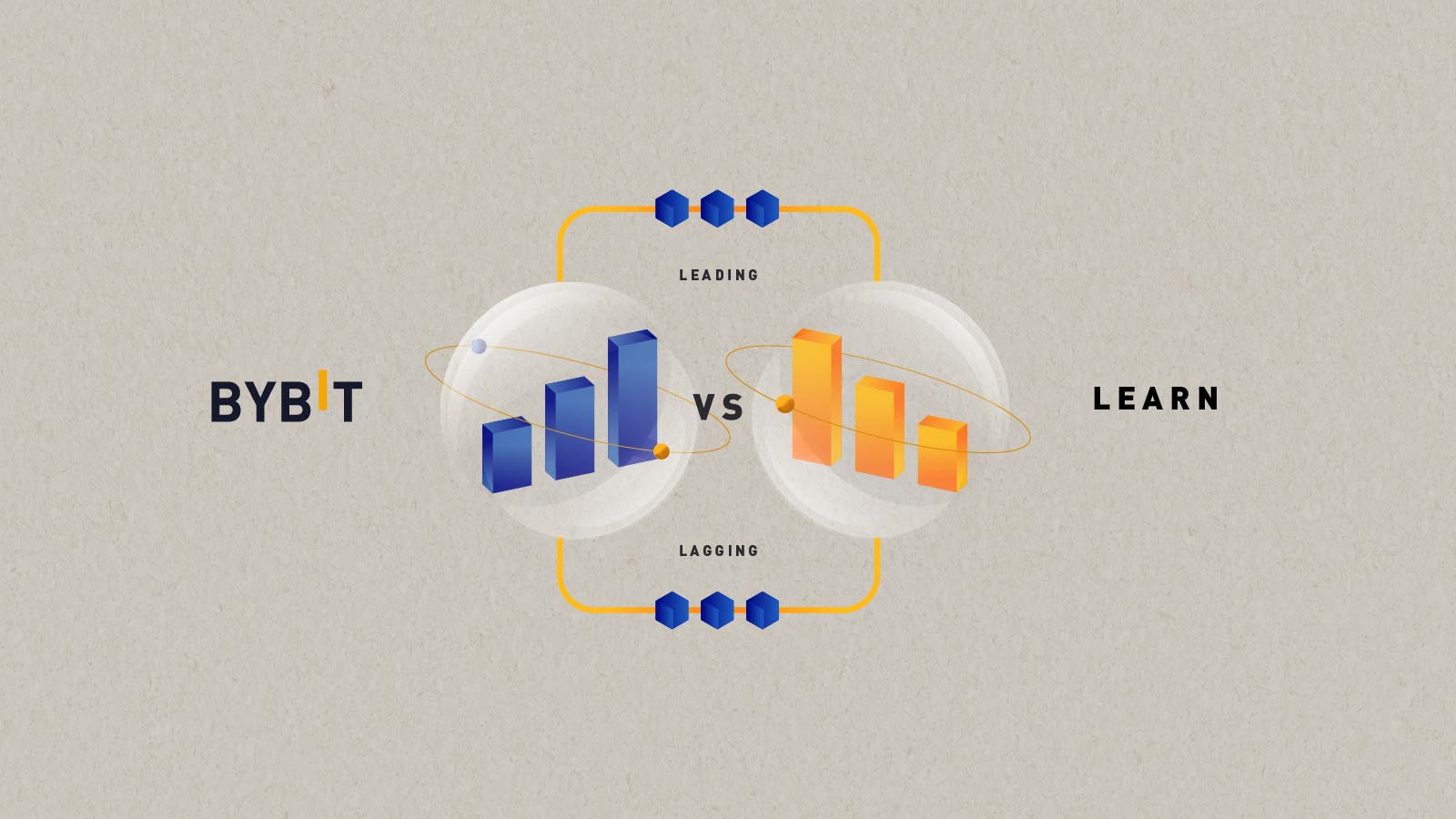 Leading vs. Lagging Indicators: What Are They?

Before comparing leading vs. lagging indicators, it’s important to know how similar and different they are. Leading and lagging indicators are used in the technical analysis of price charts to predict and review the direction of price trends, potential reversal zones and target pricing for cryptocurrencies.

What are Leading Indicators?

Leading indicators are applied to a chart that uses past price data to forecast future price movements. These indicators “lead” the price because they anticipate movements and trends ahead of time. This helps crypto traders open or close their trades near the beginning of a new trend.

When price corrects lower and approaches support, sellers stop selling and buyers begin to buy. This creates an imbalance in the marketplace, in which buyers overwhelm sellers and the market price rises. The opposite is true for resistance.

Support and resistance can be drawn and noted on the chart long before the price arrives, so that the trader can plan their trade or set alerts. In the support example above, we simply extend the line to the right, and as the price approaches, it becomes a buying signal. It truly is that easy — but more importantly, trend lines work!

Having a well-thought-out plan for your trade tends to lead to more stable results, rather than acting on emotion in the moment.

What Are Lagging Indicators?

Lagging indicators are chart reading tools used by traders to analyze the market by using an average of previous prices. Rather than predict future market movements, they’re generally used to confirm the current trend and direction. Lagging indicators, as the name implies, lag the market so traders are more certain of the trend direction before they place a buy or sell order.

This is the price to pay for greater confirmation, and to some traders it’s worth it. Lagging indicators work really well when strong trends are in force. If the market isn’t trending, then lagging indicators provide little help, as the delay  in detecting a market reversal means entering at a worse price into a trend that doesn’t move.

As a result, a trader heavily reliant on lagging indicators will oftentimes miss major turning points and get whipsawed around in sideways trends. Ideally, instead of looking at it as leading vs. lagging indicators, traders will want to incorporate a mix of both into their trading plan.

Why Are Leading and Lagging Indicators Important to Technical Analysis?

Lagging indicators, on the other hand, are essentially an average of past price history, showing whether current trends are higher or lower than average. Using lagging indicators is like looking out of your rearview mirror to see where you’ve been.

It’s important to note that relying solely on the signals of leading — or lagging — indicators will never produce 100% accuracy.

Some Examples of Leading Indicators

A leading indicator is a tool that’s added to the price chart to anticipate the future direction of the market. As a result, it allows traders to enter or exit the trend earlier, relative to waiting for additional confirmation from other tools.

Several leading indicators are available. The calculation behind each indicator is different, so they produce different, and sometimes conflicting, results.

Below are some examples of popular leading indicators.

If this was the first indicator you thought of when comparing Fibonacci retracements and extensions are hidden levels of support and resistance. These levels are “hidden” because they’re not obvious to the naked, untrained eye.

These price zones represent potential levels of support in an upcoming correction. As you can see, during the summer of 2021, Bitcoin falls to the 38.2% Fibonacci retracement level on multiple occasions before rallying nearly 75%.

The Fibonacci retracement tool is a leading indicator because we can apply the tool to draw these support levels in April 2021, nearly five weeks ahead of the first touch of the 38.2% level!

The Fibonacci extension is another tool that can anticipate turns in the market ahead of time by plotting how far a trend may extend.

In the Bitcoin chart above, the tool measures the length of the first wave from March 2020 to August 2020, then projects that distance from the September 2020 low. Essentially, since September 2020, a trader could view these levels as potential turning points.

One of the projections produced in September 2020 when Bitcoin was trading near $10K was for the trend to extend, and then reverse near $69K in price. Bitcoin topped at $65K in April 2021.

Pivot points are another level of hidden support and resistance. Again, they’re “hidden” because the levels aren’t obvious to the naked eye. Pivot levels have been around for many years, and have stood the test of time for providing potential turning points in the market.

Pivot levels are calculated based on a period’s high, open, low and close prices. These four prices are run through a formula to calculate the output levels. The thinking behind the formula is that the prior period’s price movement will impact the next period’s turning points.

In the Ethereum chart above, we have weekly pivot points that are calculated at the beginning of the trading week. As trading begins on Sunday, you’ll often find prices bouncing and reacting near these pivot levels throughout the week.

As these price levels are created on Sunday, having only certain levels to focus on keeps the trader from getting distracted, and they can consider entering the market when the price reaches a pivot level.

“Whales” are the large money players within the crypto market, so understanding how they’re behaving helps predict the future price direction of the crypto. If price and OBV are diverging, that price behavior suggests a trend change may soon be at hand. 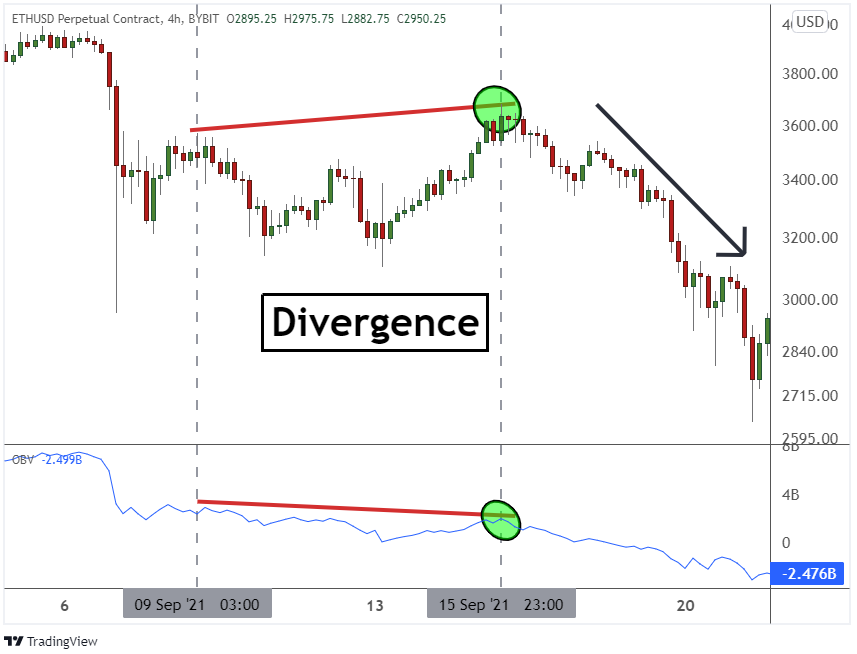 In the Ethereum chart above, the rally in September 2021 doesn’t have the supporting volume. The market’s price rallies to a new recent high while OBV is below its starting point. This means there’s a small  volume on the rally, and the market is at risk of falling.

Sure enough, Ethereum ends up falling about 25% over the next week on increasing down volume.

Some Examples of Lagging Indicators

A lagging indicator is a tool used by traders to analyze the market using averages of previous price data. As these calculations are a variety of moving averages, they tend to react more slowly to the market’s movements.

While this might be a reason why some traders prefer using Pivot Points and OBV when comparing leading vs. lagging indicators, this time delay can be used in your favor. Slower reaction time helps the trader capture the essence of the larger trends, and can be a confirmation signal to the trend change.

Contrary to popular belief when comparing leading vs. lagging indicators, the relative strength index (RSI) is a lagging indicator. As one of the most popular oscillators for traders, the RSI provides a measure of internal strength. When the RSI becomes oversold and the indicator dips below 30, then the market is ripe for a bullish reversal. If the RSI becomes overbought and the indicator rises above 70, then the market is at risk of correcting lower.

In July 2021, Bitcoin had been entrenched in a large correction. This downtrend meant that opportunities to sell short would be the higher probability trades. Sell trade signals would appear when the RSI was overbought, with the RSI indicator crossing back below the 70 level.

There were several sell signals generated during July that would have helped a trader enter into the downtrend. Not every signal is always 100% accurate. However, the signals tend to be a little more reliable than a leading indicator because lagging indicators have the benefit of averaging in the longer trends.

Looking at the Bitcoin chart above, from May 2021 through July 2021 Bitcoin was generally trading below the 200-period simple moving average. This implies the trend was lower, and the trader was wise to consider sell positions.

Then, Bitcoin began to rally in late July, breaking above the SMA. At that point, Bitcoin was flashing buy signals.

The benefit of using moving averages is that you can easily determine the direction of the longer trends. However, the signals will be delayed, as it took four days from the bottom on July 20 before the buy signal from the moving average was generated.

The outer limits of the Bollinger Bands can be seen as support and resistance levels. The idea is that the market may stray from the middle only as far as the outer bands, then eventually retrace back to the moving average.

On the Ethereum 4-hour chart above, we have Bollinger Bands added to a 100-period moving average. When Ethereum falls toward the lower band, this can be seen as a buy signal. The subsequent sell signal is generated when the price rallies to the upper band.

How to Combine Leading and Lagging Indicators

Now that you understand the differences when looking at leading vs. lagging indicators and understand both have useful qualities, it’s time to combine both of them. A powerful strategy which crypto traders implement is using leading indicators to establish a price zone of interest, then allowing the lagging indicator to confirm the trade.

This type of combination allows traders to see potential reversal zones in advance of the market arriving. This affords the trader the ability to use the lagging indicator to trigger the entry signal.

As a leading indicator, the convergence or divergence of OBV with price can indicate whether the current trend is strong and likely to continue — or tired and about to reverse. When the SMA is aligned with OBV, the combination can generate a powerful and quick trend.

On the Ethereum chart above, OBV starts to break lower before the price breaks the equivalent support zone. This early breakdown of OBV hints that large volumes are being sold and are likely to push market prices lower.

Taken together, the leading indicator is suggesting new lows while the lagging indicator shows a downtrend. Ethereum did in fact undergo a sell-off over the next several days.

As mentioned, the Fibonacci tools provide hidden levels of support and resistance. Once these levels are determined in advance, look for the RSI to become overbought or oversold for the trigger signal. By waiting on the lagging indicator to appear, the chance of a false signal is greatly reduced.

Let’s go back to our previously noted Fibonacci extension example. Months in advance, we can identify the $69K area for Bitcoin as a potential reversal zone. As Bitcoin approaches the $69K resistance area, look for overbought signals to appear on the RSI.

On April 14, the day of the high for Bitcoin, the RSI indicator flashes a Bitcoin sell signal after being overbought. This combination of leading and lagging indicators leads to a quick 50% collapse in pricing.

Since pivot points are a leading indicator and are calculated in advance, a powerful combination is created when the RSI indicator is brought in to confirm a reaction that a crypto market is making at a pivot point.

Above, you can see weekly pivot points (a leading indicator) that are calculated on Sunday for the full trading week.

Entering from above, Ethereum prices reach the weekly pivot point on Tuesday, August 3, 2021. At the same time, the RSI (a lagging indicator) reaches into oversold territory below 30. When the RSI crosses back above 30, it confirms a bullish trade.

A combination of the two can lead to more informed trading decisions as the trader receives the benefit of prediction joined with the strength of confirmation.