How to Use Moving Average to Trade Crypto Profitably

Moving average is the most widely-used technical indicator in the world. It can help traders to gauge the market sentiment. In financial trading, the price has a higher probability of continuing its movement toward the direction of a trend. The moving average plays a key role in identifying where the price may head.

In the cryptocurrency market, technical analysis has become an essential tool because it helps traders ascertain price direction more precisely. Moreover, it’s easy for traders to access a wide range of technical indicators, the moving average being the major one.

We’ll look at the nuts and bolts of moving averages in cryptocurrency trading in the following section. It might just help you to change your way of trading.

What Is the Moving Average?

Moving average is a technical indicator that shows the average price of a specified number of recent candles.

Moving average is a very effective indicator, as it helps traders find the trend without an information overflow. The basic concept is to discover what average traders are doing in the market.

For example, if a crypto asset’s price is above the 50-day moving average, it indicates that its buyers are more active than its sellers. Therefore, if you want to trade that cryptocurrency, you can quickly eliminate selling opportunities and consider only buying opportunities.

In a price chart, the moving average is shown with the price in a dynamic line that changes its position over time, as shown in the image below: 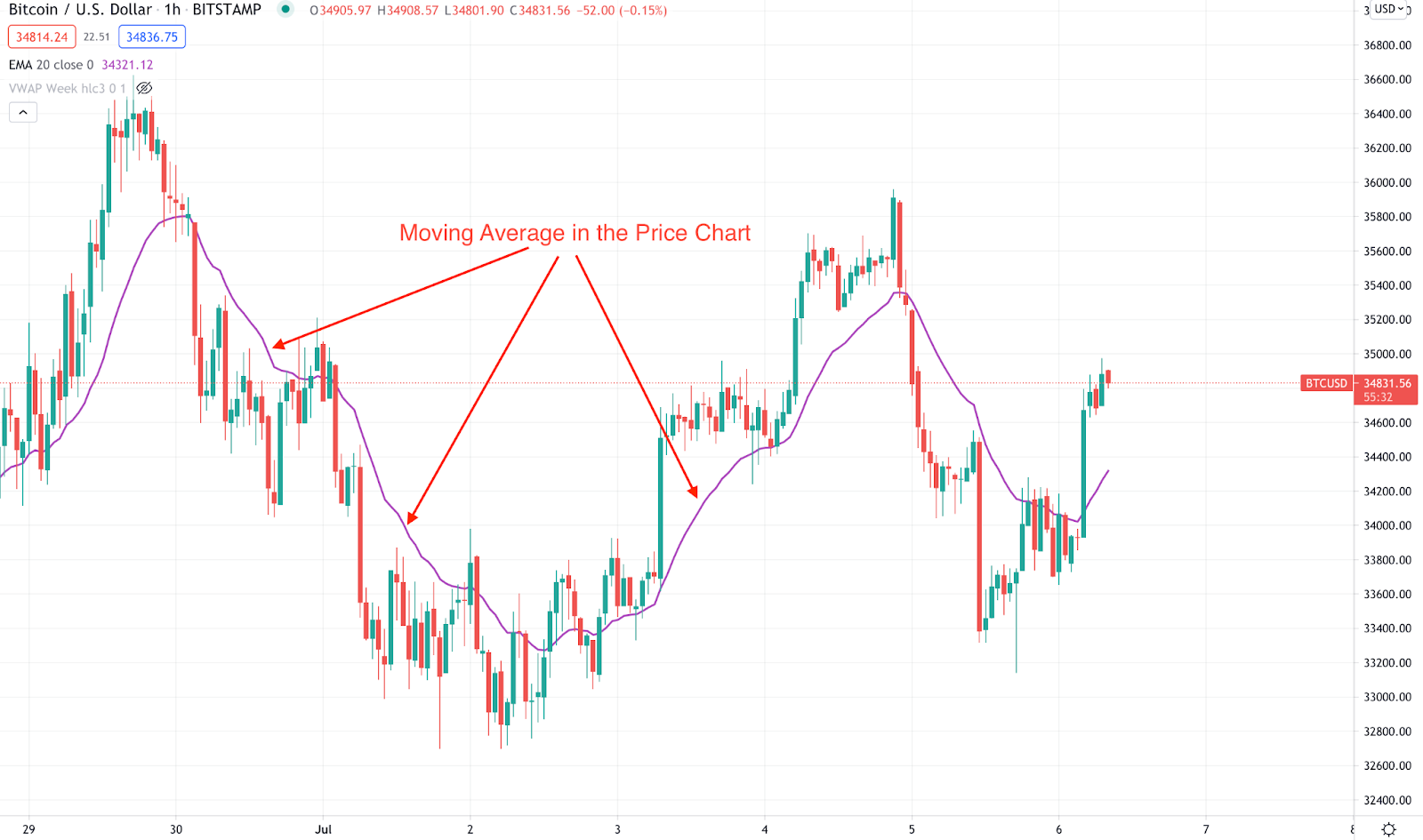 However, making trades using moving averages requires a detailed understanding of the indicator, especially the method of calculating it.

Although the moving average considers the average price of a recent number of candles, there are other considerations when calculating the value. Based on the method of calculation, the most effective moving averages are:

Let’s look at them one at a time. 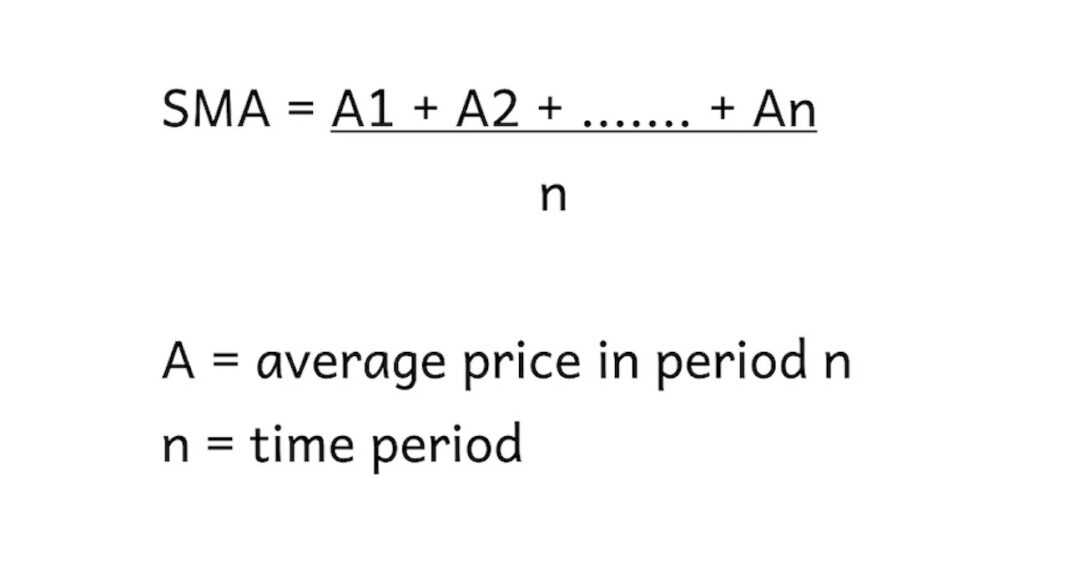 The simple moving average considers all prices equally so that investors can find the actual average price. Moreover, the SMA indicator changes its position as soon as a new candle appears.

Exponential Moving Average: EMAs are similar to SMAs, as they both track a trend’s direction. However, EMA involves a more complex calculation to place more weight on the most recent price changes. Therefore, the EMA provides more accurate price predictions in sudden price fluctuations and reversals. 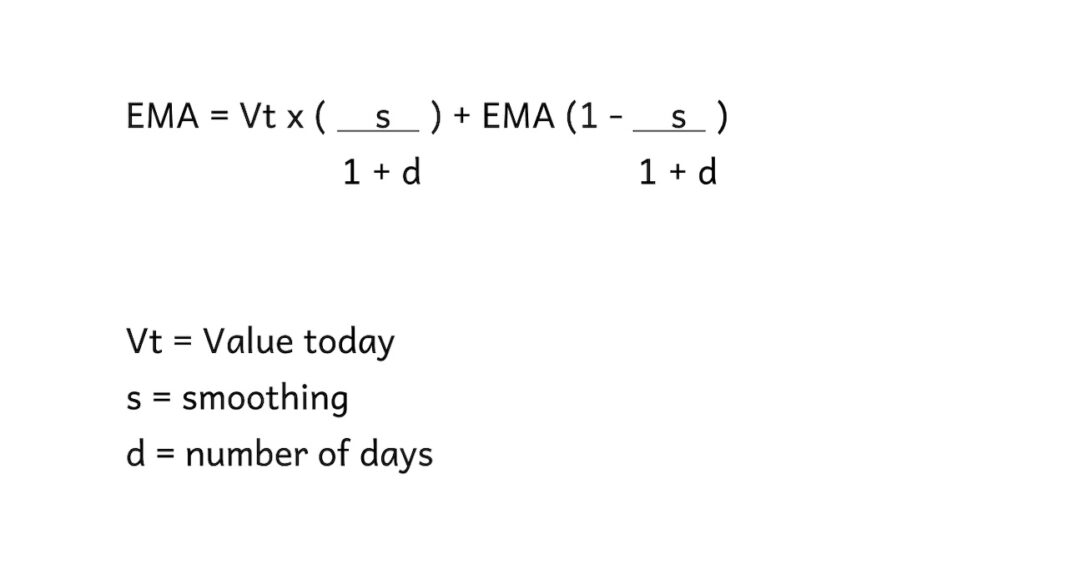 EMAs are perfect for traders who engage in short-term trading. Moreover, the best method is to use SMA and EMA together to find both short- and long-term price directions at one time.

Weighted Moving Average: The Weighted Moving Average (WMA) puts more weight on the most recent prices (data points) and less on the previous data. WMA multiplies each bar’s price by a weighting factor to focus on the most recent data. The sum of the weight will eventually equal 1 or 100%. WMA is supposed to be more descriptive with the frequency of the concurrency as compared to SMA. That is because all of the numbers on SMA are with equal weightage.

Let’s see the calculator formula for the last 20 candles’ WMA:

EMA vs. SMA vs. WMA: The Differences

It is essential to understand the difference between EMA, SMA, and WMA. This way, investors can get a better idea of which indicator they want to use and why.

The table below highlights the main differences between EMA, SMA, and WMA.

A comparison chart of SMA, EMA, and WMA.

Moving average is not only the most-used indicator in the world, but it’s free on most trading platforms. Moreover, you can add multiple MAs together by changing the time period and calculation method. 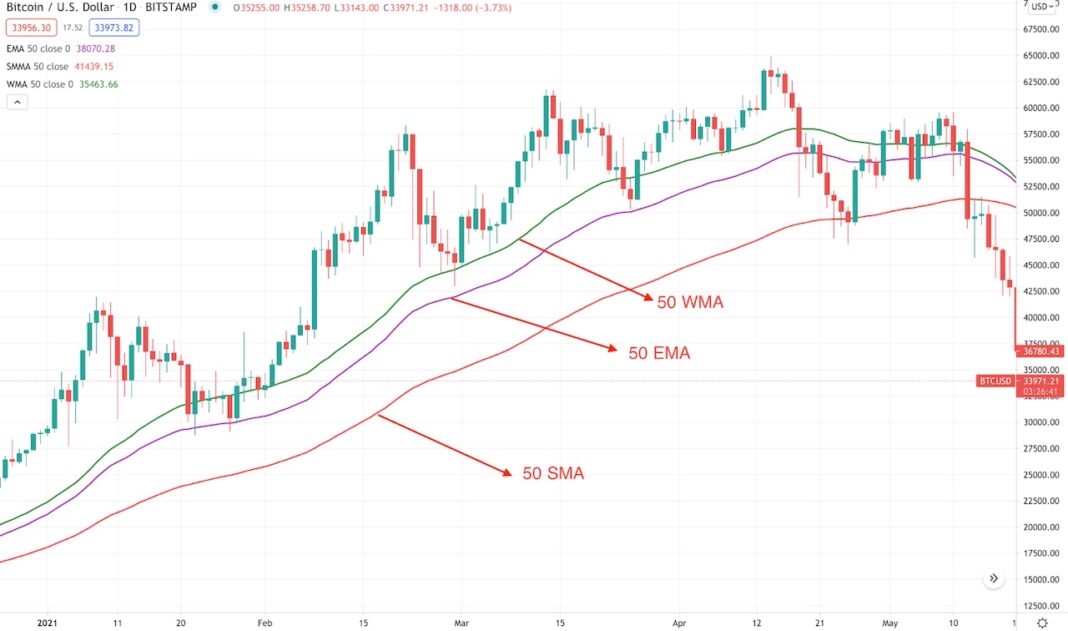 The above image shows that the 50 WMA is closer to the price than EMA and SMA. However, the 50 EMA works as the most effective dynamic support level in the bullish trend.

In a trending market, the MA works as a dynamic support/resistance level. Therefore, if the price comes toward the moving average and shows a rejection of the trend, we can immediately open a position.

Let’s look at an example: 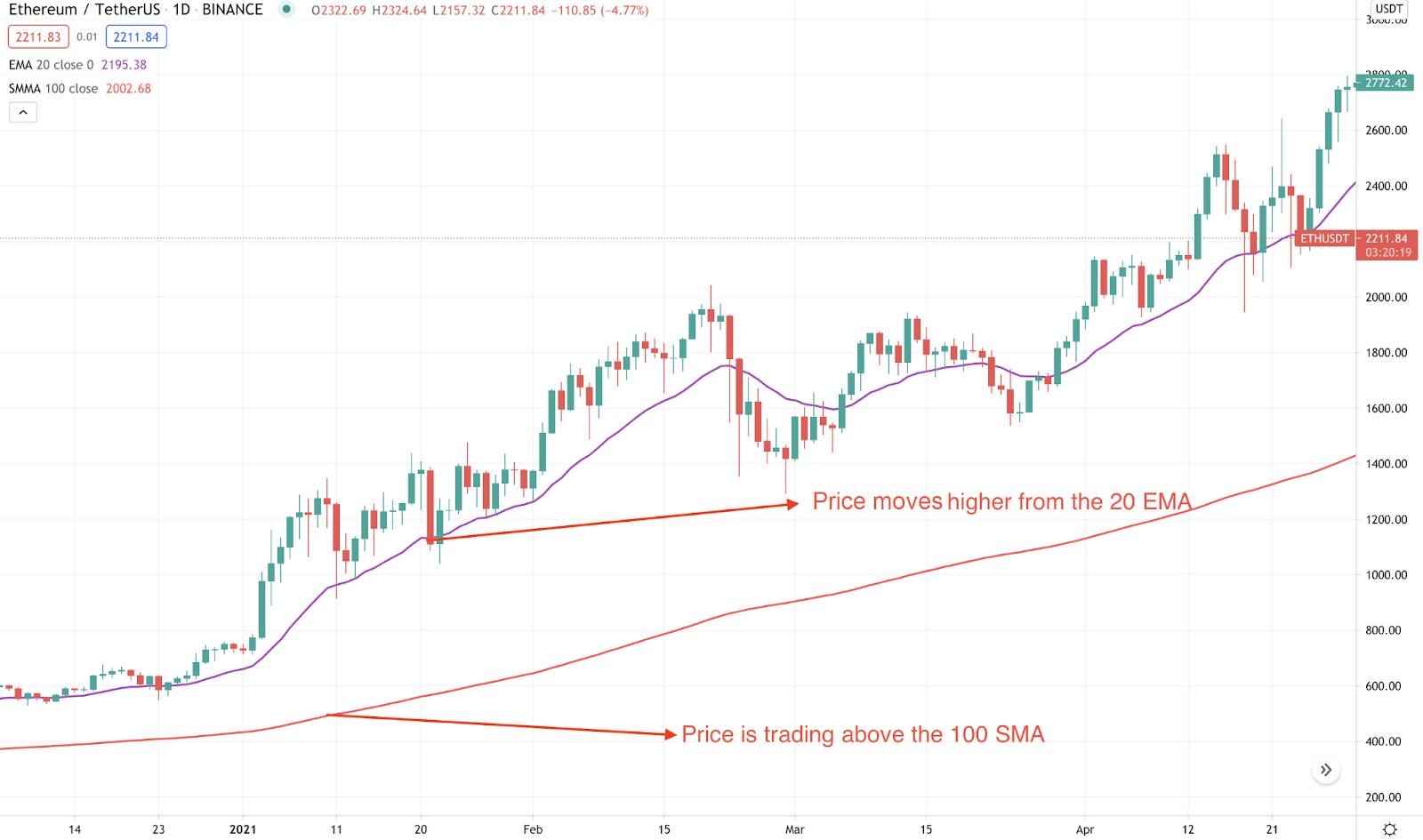 However, it’s hard to follow the trend in a volatile market because the price maintains no specific direction. 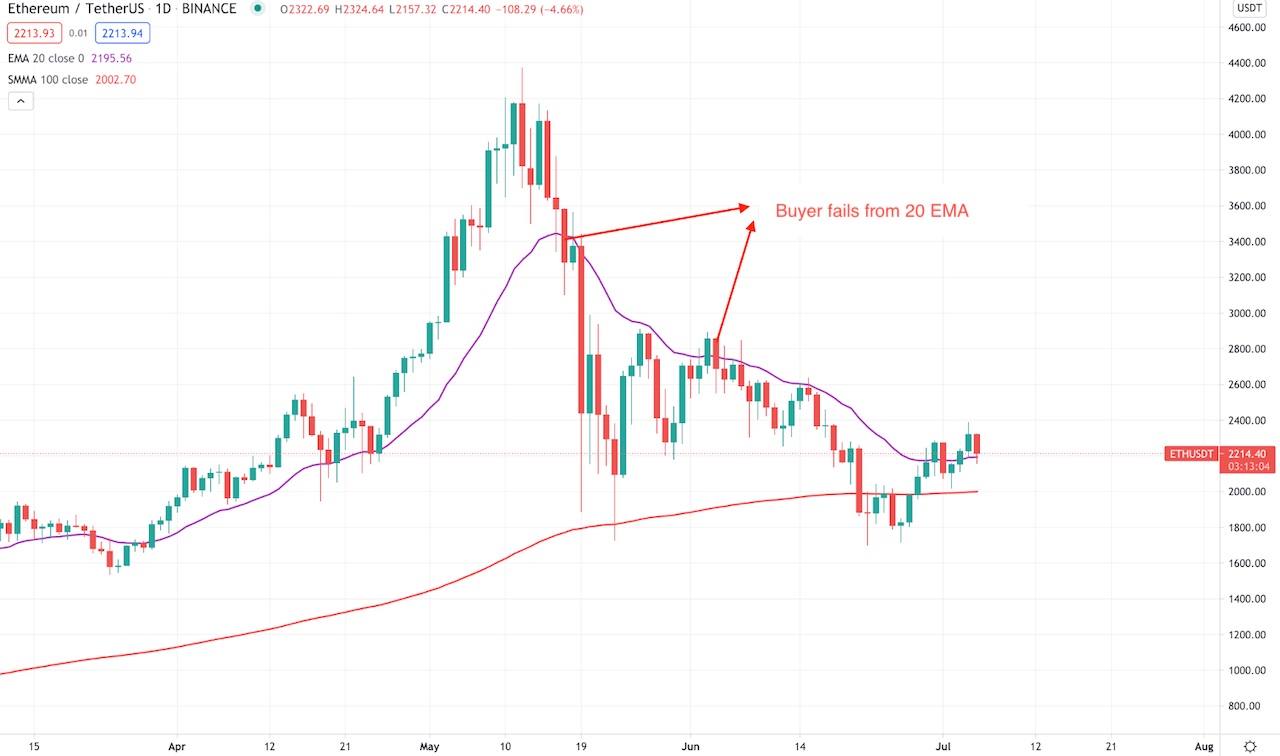 Here we can see that the price moves down to the dynamic 20 EMA but fails to move higher, even if the price has shown a bullish candle close to the 20 EMA. The selling pressure below 20 EMA but above 100 SMA signifies that the price direction is indecisive, and traders need more confirmation while taking an entry.

Another chart-reading technique is to identify the price reversal point using the MA and support/ resistance level. When the gap between the price and dynamic 20 EMA expands, they will try to come close due to a “gravitational force” known as mean reversion.

The possibility of a mean reversion is high if the price reaches any vital support/resistance level.

Let’s look at an example: 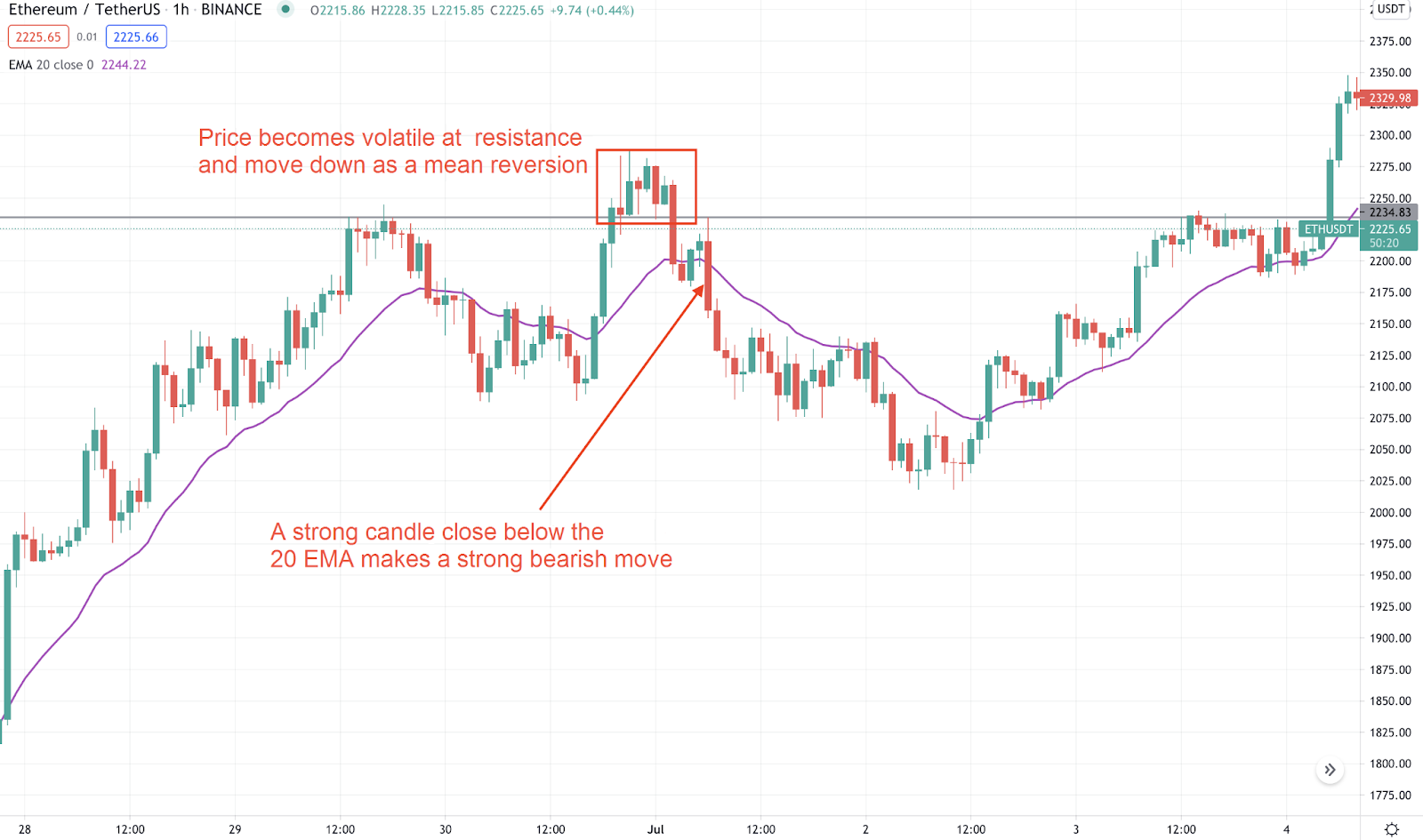 In the above image, we can see a horizontal resistance level where the price increases by expanding the gap between the price and dynamic 20 EMA. Later on, the price becomes volatile and moves down as a mean reversion. Moreover, a bearish candle close below the 20 EMA takes the price lower with strong bearish pressure.

The above section explains how to make a trade using the moving average in volatile and nonvolatile market conditions with a reversal entry. However, make sure to use a strong risk-to-reward ratio to minimize the unavoidable risk.

What Happens During Moving Average Crossover?

One of the best examples of MA crossover is the golden cross. In the example below, a slower MA (50 EMA) crosses over the higher moving average (200 SMA) to indicate a possible impulsive bullish pressure in the price. 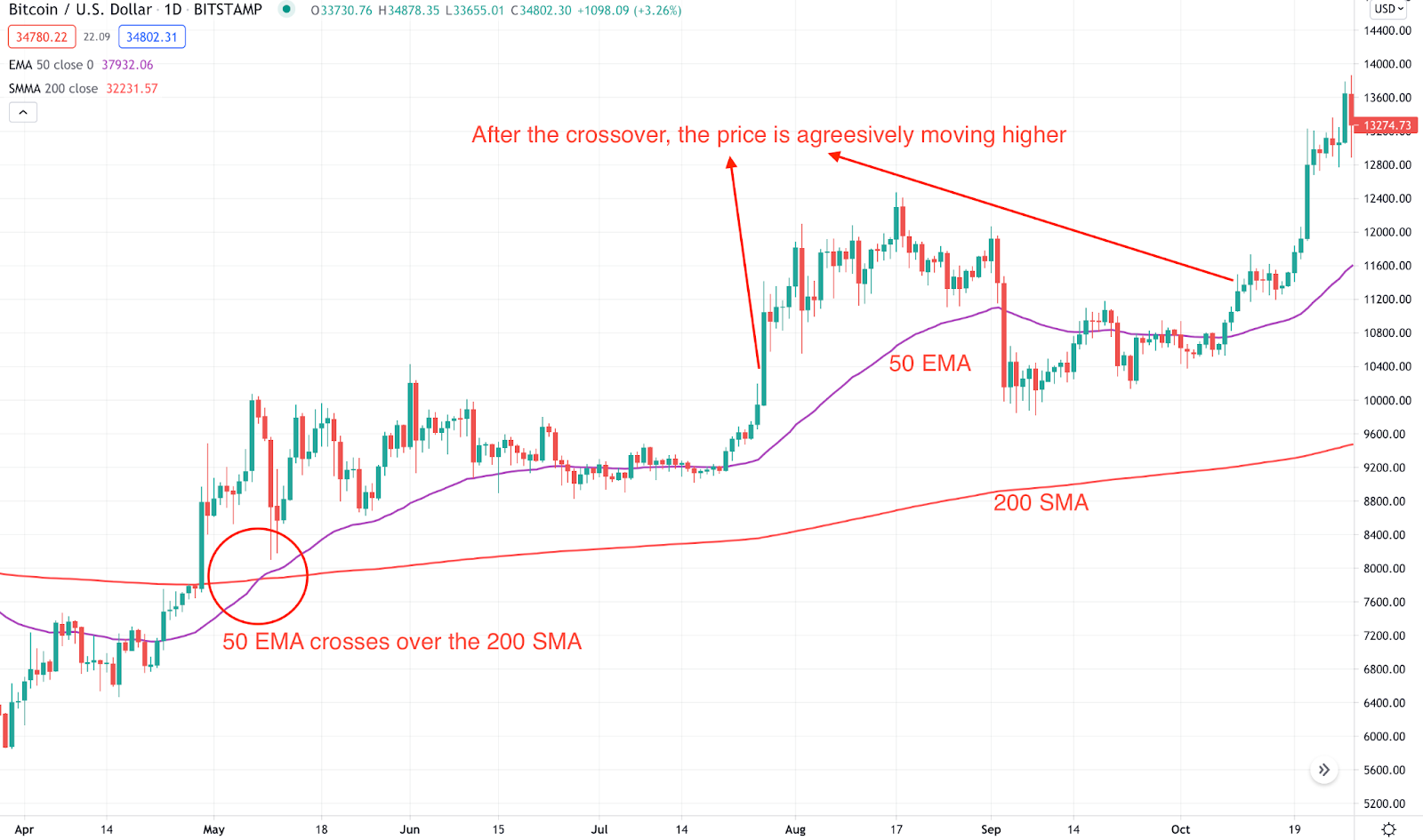 The 50 EMA crosses over the 200 SMA, signaling the beginning of a new uptrend in the chart above. Using this method, you have to wait for a correction after the crossover. Then, any sign of a trend continuation pattern from the lower-valued SMA would be the entry point of the buy trade.

Moreover, after identifying the price direction using the golden cross, you can open a buying position from any near-term support or resistance levels.

The above section explains how the moving average helps traders to identify the market trend. Its reliability and effectiveness allow investors from all around the world to use it. However, there are some major drawbacks to this indicator that can cause it to provide incorrect signals:

Therefore, investors are advised to use other technical tools, such as support/resistance levels, MACD, RSI indicator, to increase the trading probability.

The cryptocurrency market is not a perfect example of efficiency. However, there are lots of opportunities to make money from high-frequency trading. Before buying a crypto asset, it’s important to find the market trend because the trending market has the highest profitability. Moving average plays an important role in determining the market trend.

The blockchain industry is growing, and new use cases and applications are making further improvements in technical analysis. Still, there are no alternatives to indicators like moving average, oscillators, volumes, as they are highly profitable. However, the ultimate success comes from a trader implementing many trading tools together to anticipate price direction.