Hidden Bullish & Bearish Divergence: How to Apply For Crypto Trading? 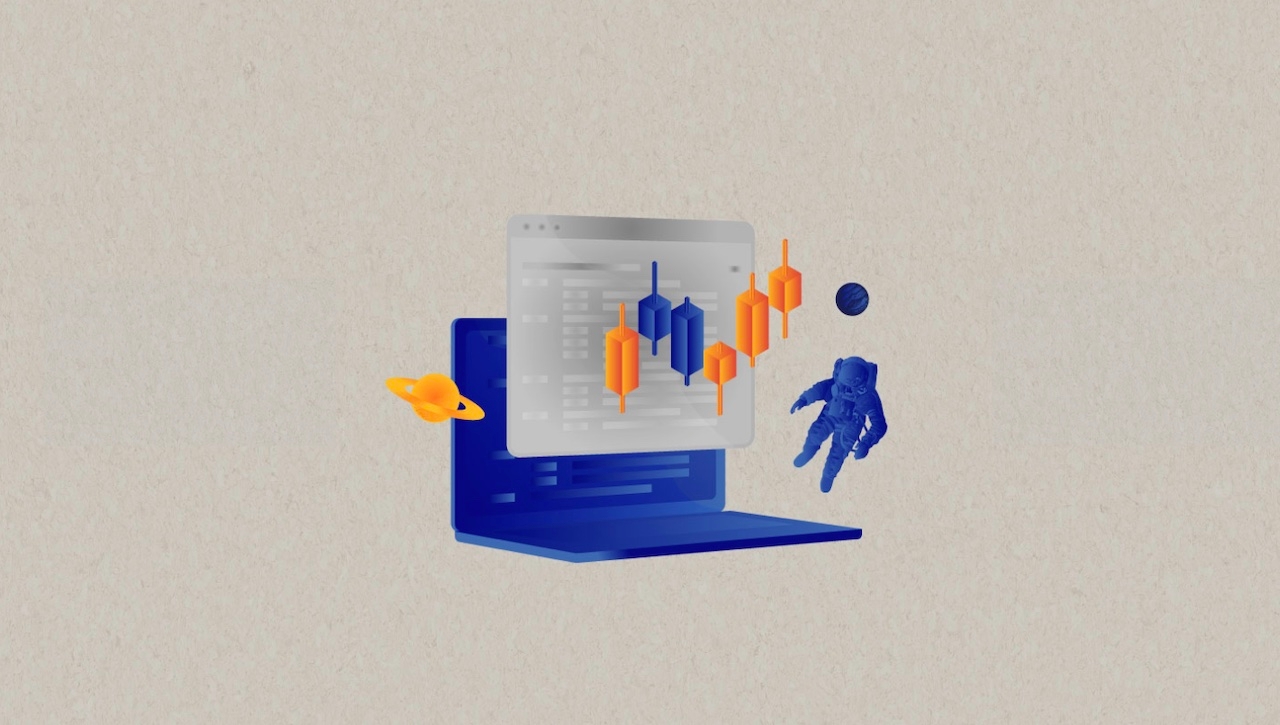 Both types of divergence appear frequently on crypto charts. Alert traders who spot them are able to see good investment opportunities.

Divergence is a technical analysis pattern spotted on price charts when the price of a crypto asset is moving in the opposite direction of a technical indicator or moving contrary to other data. Divergence is a warning that the current trend is weakening and may change.

There are two types of divergence that can signal a bullish rally may soon begin. Regular or classic divergence is the most common type. Hidden divergence is a little more difficult to spot but can be a powerful pattern, signaling a shifting trend.

What Is Regular or Classic Divergence?

Regular divergence occurs when the price of a cryptocurrency continues higher and creates higher highs, but the indicator creates lower highs. 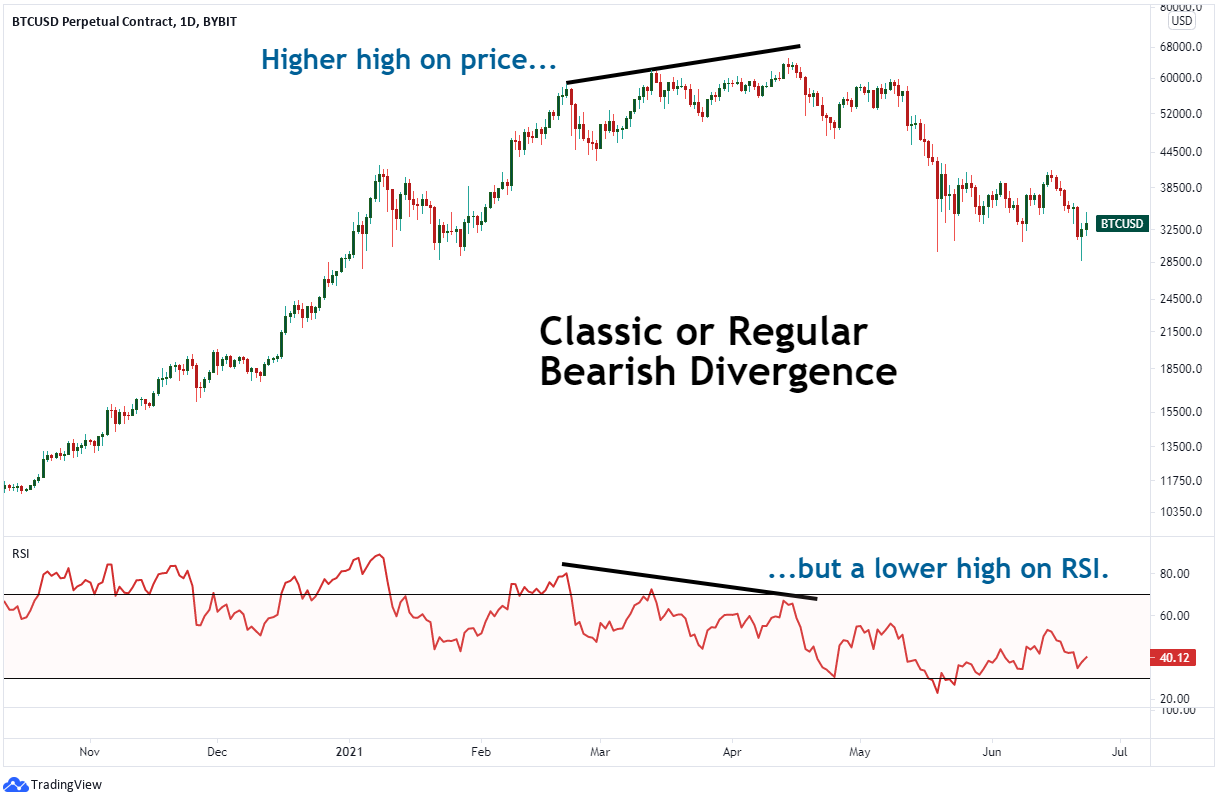 In the image above, Bitcoin continues to create new all-time highs in price. However, the Relative Strength Index (RSI) indicator is creating a series of lower highs. This is a bearish symptom of market momentum and suggests a trend change from up to down is about to begin.

The same thing can also happen in the opposite direction. 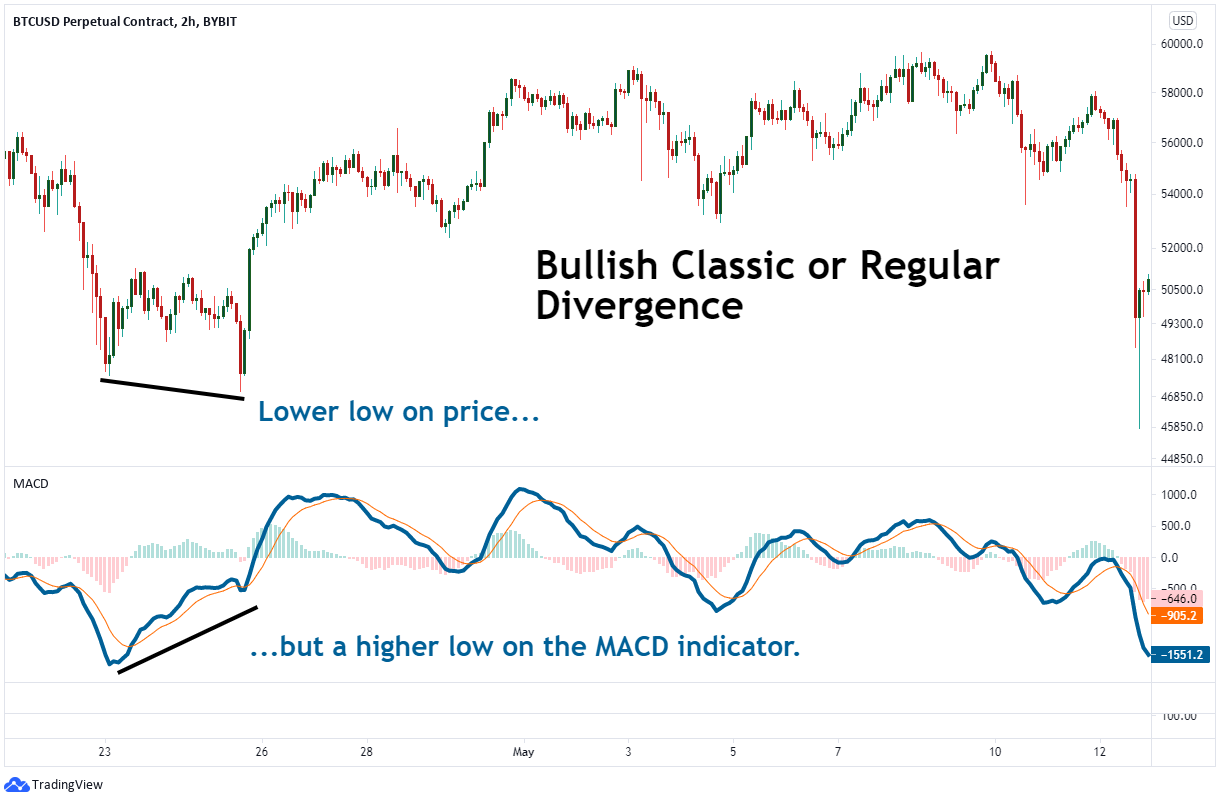 In the example above, Bitcoin is experiencing a correction and keeps carving lower lows in price. However, the MACD indicator creates higher lows, signaling the downward momentum has weakened and a bullish rally about to begin. Bitcoin goes on to rally approximately 20% in a couple of weeks.

What Is Hidden Divergence?

For example, a bullish hidden divergence happens during a correction of an uptrend when the value of an asset makes a higher low. However, the oscillator is still showing a lower low. This usually translates that the bullish trend continuation signals trader to take profit.

Bearish hidden divergence, on the other hand, is the opposite. Meaning the value of an asset makes a lower high, but oscillators are showing a higher high. This signals a trend reversal in which a trader should stop loss and sell-off as soon as possible. 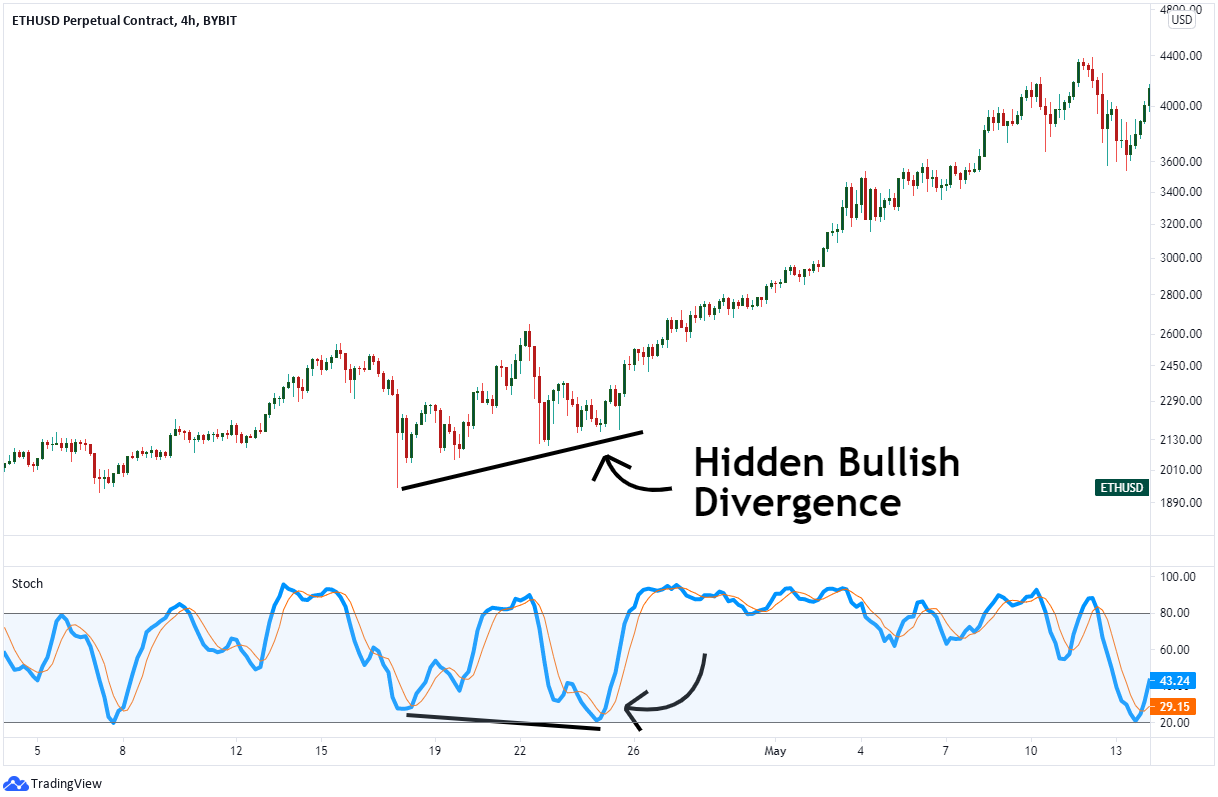 In the image above, Ethereum is consolidating and begins to grind sideways, creating a higher low in price. At the same time, the stochastic indicator points to a lower low. This is a bullish hidden divergence. It signals a rally is about to begin. Sure enough, Ethereum rallies nearly 90% over the next couple of weeks. 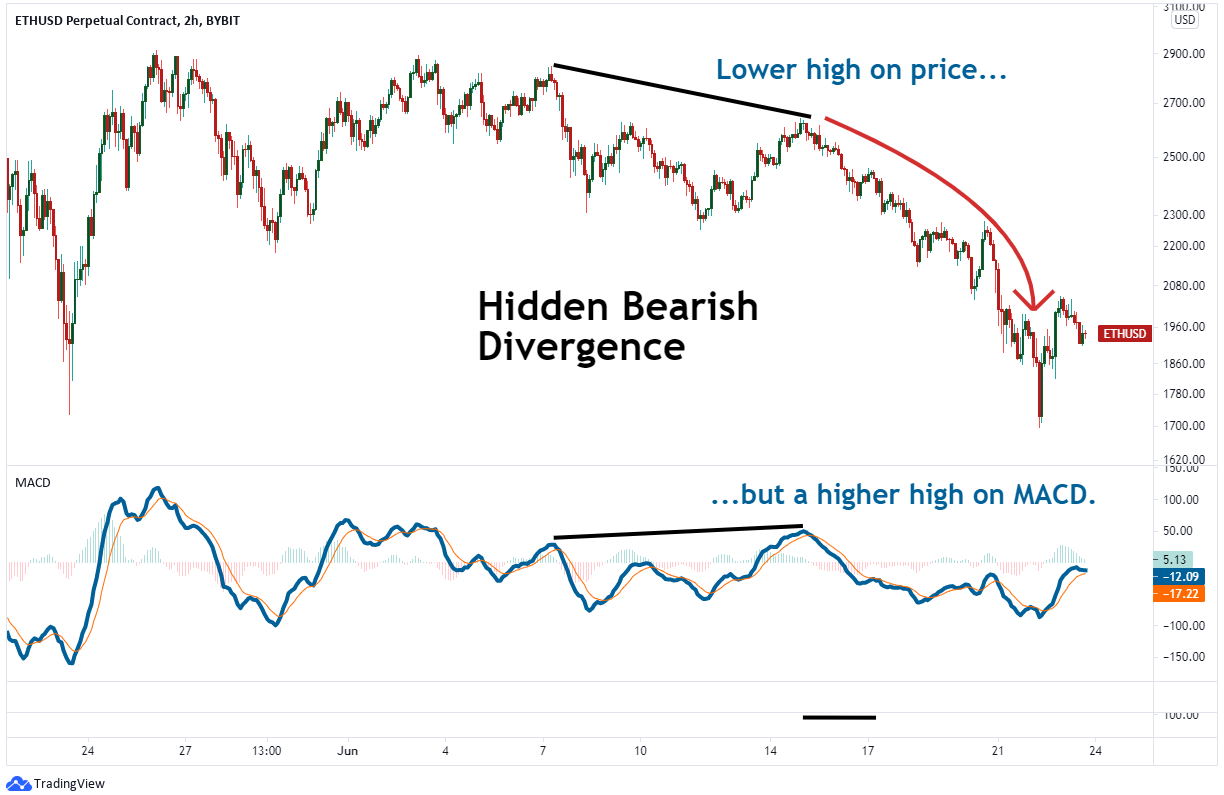 After a feeble recovery from a May 2021 correction, Ethereum carves a hidden bearish divergence pattern. Ethereum displays a lower high on price, while the MACD indicator shows a higher high. This signals that a continuation of the downtrend may begin soon. Shortly thereafter, Ethereum fell 35% further.

When to Use Regular or Hidden Divergence

The difference between regular and hidden divergence is subtle.

How Is Hidden Divergence Different?

Hidden divergence is different from regular divergence due to the location of the pattern. Hidden divergence tends to occur within an existing trend. It signals the end of a consolidation phase within the larger trend. We call it “hidden” because it isn’t obvious to the untrained eye. 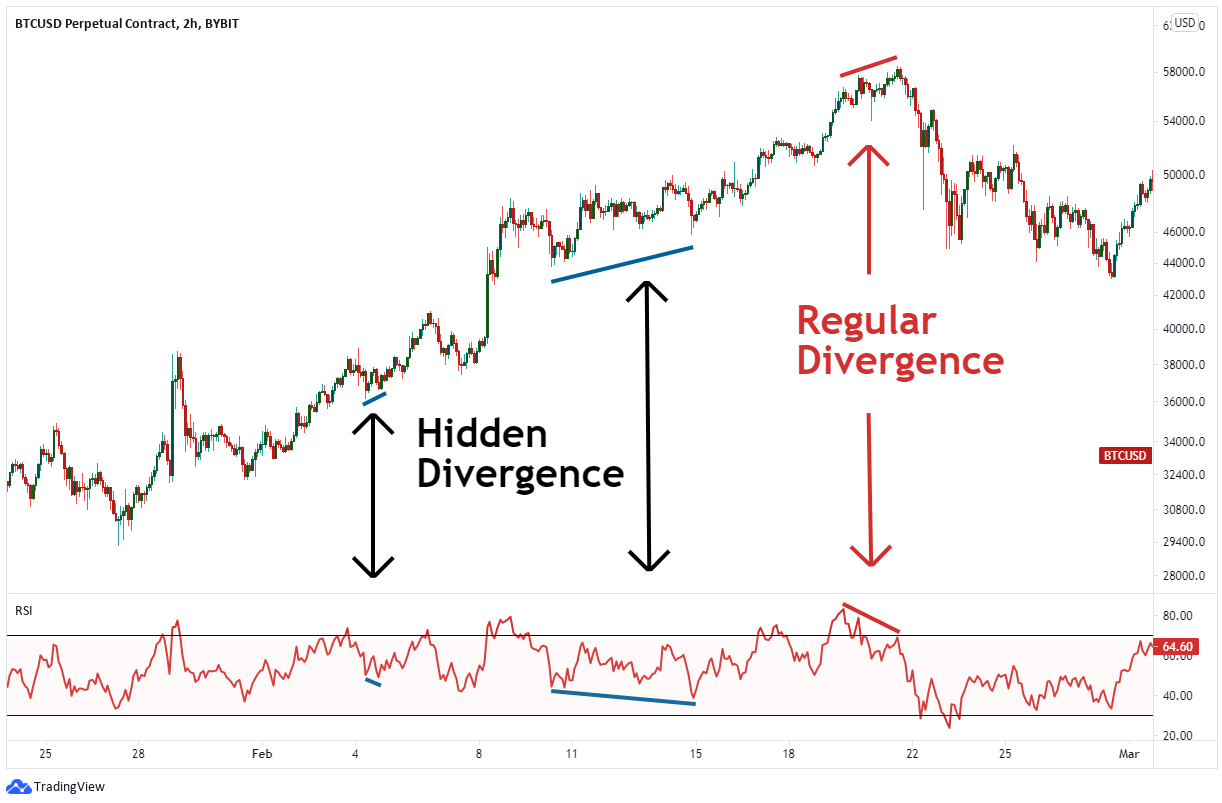 Above, we can see a strong uptrend within Bitcoin’s price. There are two instances of bullish hidden divergence in the middle of this uptrend. The first appears on February 4, 2021. The RSI indicator creates a lower low, while Bitcoin’s price creates a higher low. This signals the end of the small consolidation as Bitcoin rallies higher.

Then, between February 10 and February 14, another consolidation occurs. Again, RSI is forming a lower low, while Bitcoin’s price creates a higher low. This hidden divergence signals the end of that small correction and Bitcoin rallies further.

As the trend is tiring, regular bearish divergence appears, signaling that the trend may soon turn lower. Beginning February 19 to–21, Bitcoin’s price carves a series of higher highs. However, RSI is pointing lower highs at the same time, suggesting the momentum is very weak and a reversal is imminent. Bitcoin subsequently corrects 25% lower.

Hidden divergence will appear in both bullish and bearish directions. The examples above using Bitcoin are great illustrations of bullish hidden divergence.

An informed trader can also use hidden bearish divergence to help them identify when a continuation of the trend may continue lower. This is helpful when the crypto markets are experiencing a correction, though the average trader is uncertain if the correction will dig deeper. 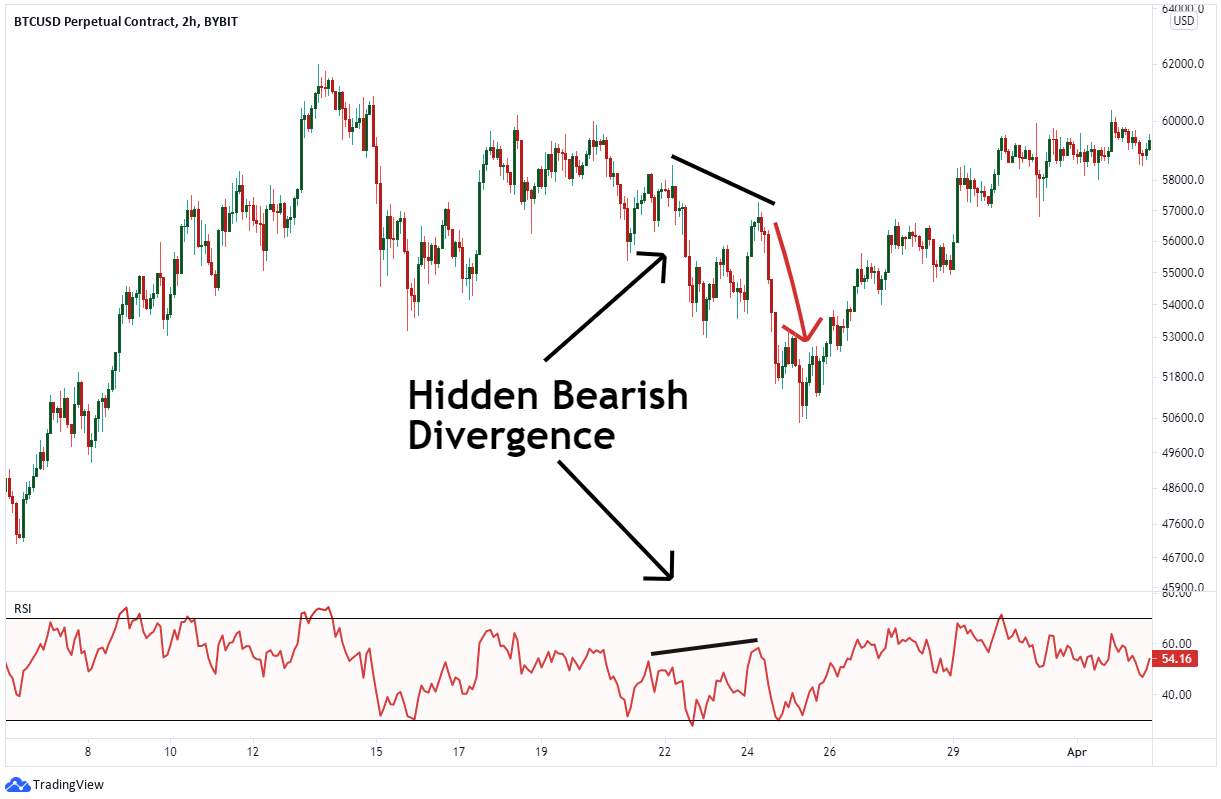 Above, as Bitcoin is correcting lower in the latter part of March 2021, bearish hidden divergence appears. On the chart, you can see a higher high by using RSI, while we have a lower high on Bitcoin’s price during the same period. This is a clue that more losses are on the horizon. Shortly thereafter, Bitcoin’s price fell about 12% in two days.

How to Spot Hidden Divergence

One important ingredient for seeing divergence is using a technical indicator. Most oscillators (indicators) will work. But keep in mind that adding more oscillators to the chart does not equate to a more reliable signal. Choose the oscillator or charting tool that you’re most comfortable with. Regardless of the indicator chosen, that same indicator can help you identify both regular and hidden divergence.

In several examples above, we used RSI. In the following examples, we’ll illustrate using stochastics and MACD, which are two other common tools used to spot divergences.

Let’s start with the MACD indicator, which if you recall has three parts:

When using the MACD to identify divergences, you can utilize any of these three parts. You don’t need all of them to spot the divergence. For these illustrations, we’ll focus on the MACD line. I recommend thickening the MACD line on your chart so that it’s easier to see. 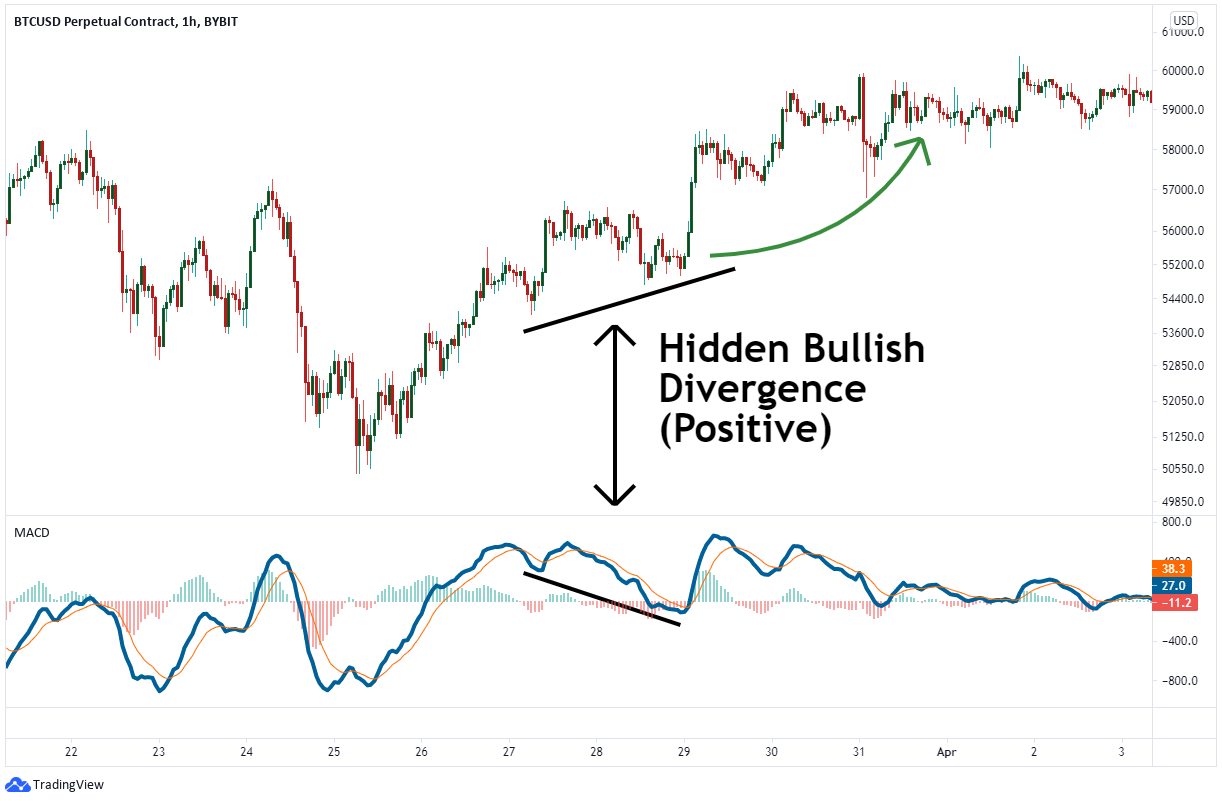 Here’s an example of a 1-hour price chart from March 2021. After bottoming on March 25, Bitcoin began to rally. Consolidation occurs between March 27–28. On March 28, the MACD line is printing lower lows compared to the March 27 value — and yet, Bitcoin’s price is higher. This is a setup for another rally. Once the consolidation ends, Bitcoin rallies about 9% over the next two days.

The stochastic oscillator (some charting packages call it slow stochastic) is a three-input oscillator that prints two lines. I usually use the input value of 15-5-5, but 14-3-3 is also useful.

Thicken the %K line so it’s easier to see on the charts. 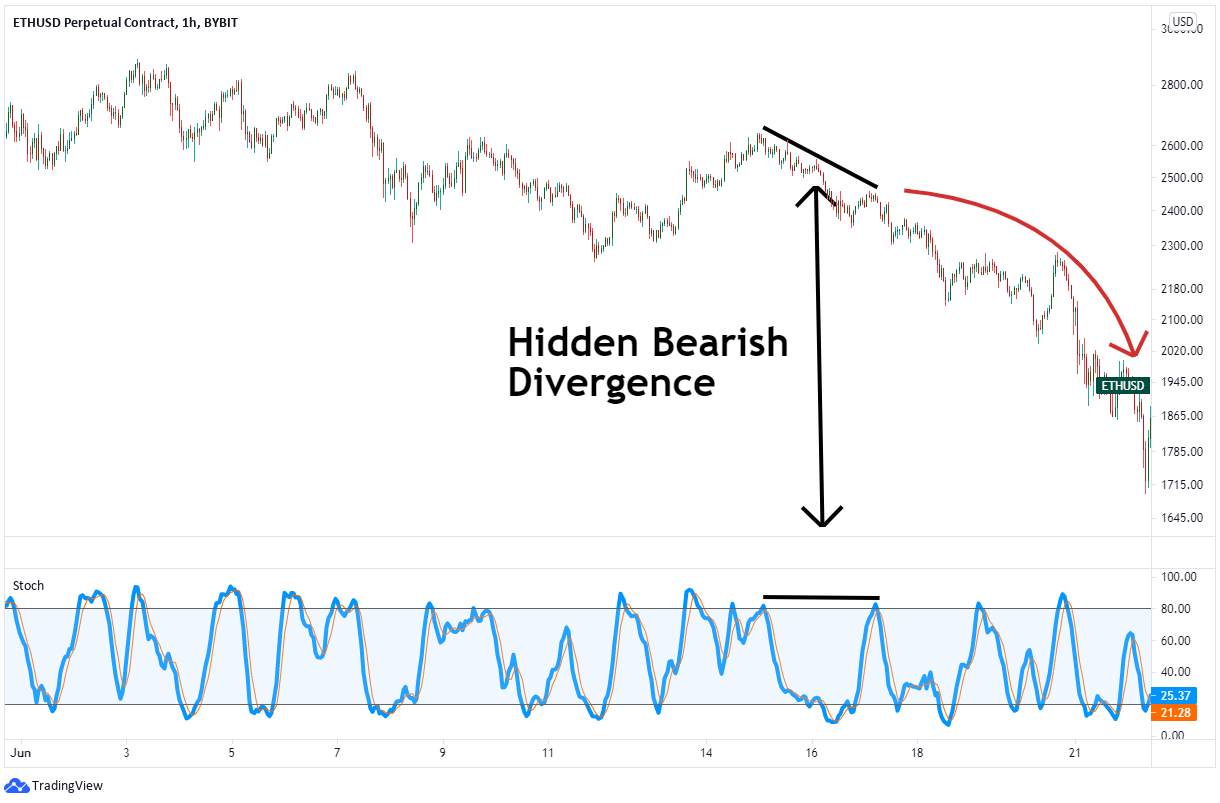 Above, we can see Ethererum locked into a downtrend on a 1-hour chart in June 2021. From June 15–7, a hidden bearish divergence is spotted as the stochastic oscillator prints a higher high, while Ethereum carves a lower high.

This pattern suggests the consolidation of the previous downtrend is over, and that Ethereum may continue to fall. With the benefit of hindsight, we can see that the price correction in Ethereum accelerated lower as the cryptocurrency lost about 20% over the next two days.

Learning to spot hidden divergence patterns doesn’t have to be difficult — especially when you consider the frequency with which hidden divergence appears on crypto charts. Now that you’ve spotted the pattern, what do you do next?

Follow this step-by-step guide on setting up the trade.

Hidden divergence is a pattern that signals the end of price consolidation. With Bitcoin, it will signal a continuation of the previous trend. To get the most out of your trade, look for the hidden divergence pattern within the context of the larger trend.

You’ll receive a more reliable signal when the hidden divergence pattern is aligned with the direction of the larger trend. 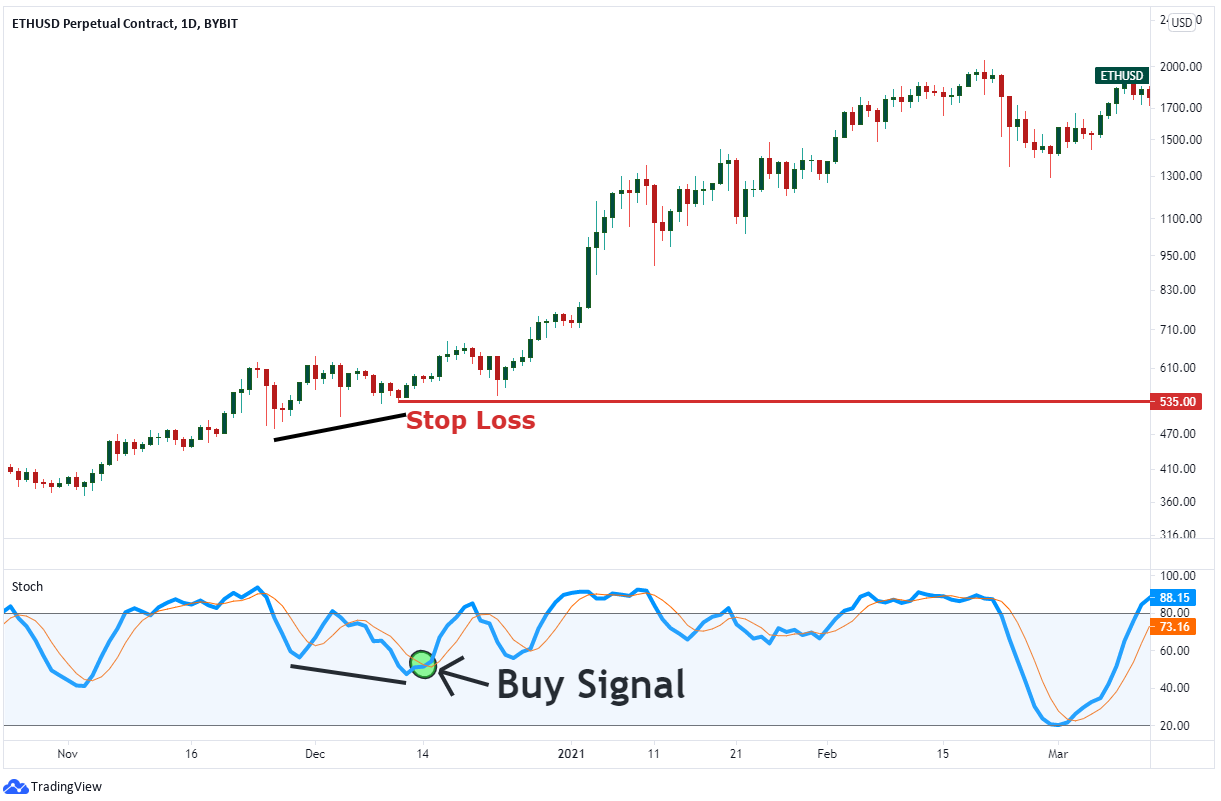 After you’ve spotted a hidden divergence trade that aligns with the larger trend, it’s time to plan out the trade’s parameters. Divergence patterns are great for signaling an upcoming trend change, but they can be less reliable when it comes to the timing of the trend change. Therefore, it’s important to give your trade room to breathe. You don’t want the normal movements of the market to stop out your trade.

As you know, crypto markets can trend at mind-blowing rates. Traders with dreams of endless profits will look to crypto and place open-ended trades with no exit plan. However, I would encourage you to think differently.

If you’re trading on shorter-term charts, i.e., 1-hour or 2-hour, consider a target where you can remove part or all of your trade. A good rule of thumb is to target at least twice the distance to your stop loss. So, if your stop-loss is 100 ETH, then target at least 200 ETH. If you’re fortunate and prices move in your favor, watch out for classic divergence that will signal a premature end to the trend.

Limitations of a Hidden Divergence

With a little practice, hidden divergence patterns can be found on a lot of crypto charts. However, there are a few limitations to be aware of.

First, divergence patterns are easy to spot in hindsight but potentially difficult to spot in real-time. This is because the emotional state of the market will get you excited about a bullish bump, only for you to find out later that this was a bearish hidden divergence setup. Try to keep your emotions out of the market. An emotional eye can bias your analysis.

Secondly, when hidden divergence appears late in a trend, risk-to-reward ratios aren’t as reliable. Most of the trend is over, and by the time you wait for the price to diverge from the oscillator, you’re entering into the trend at a worse price point.

Lastly, the price patterns for smaller cryptocurrencies may not be as reliable as the ones you’ll find with larger markets like Bitcoin and Ethereum. Fewer buyers and sellers are interested in a smaller market, leaving it more prone to volatility and bad tics.

Bullish and bearish hidden divergences are powerful patterns seen at the end of consolidation. They signal a continuation of the original trend. These patterns are frequently found within Bitcoin, Ethereum, and other crypto markets, making them easy to learn.

However, spotting them in real-time can be challenging. Additionally, if hidden divergence is discovered late in the trend, the trade tends to be less rewarding.

The key to success in trading hidden divergence is to filter your trades in the direction of the larger trend. Always analyze the market sentiment, and it is best a trend-following momentum indicator to confirm the signals.