The 6 Best Swing Trading Indicators You Must Know in (2022) 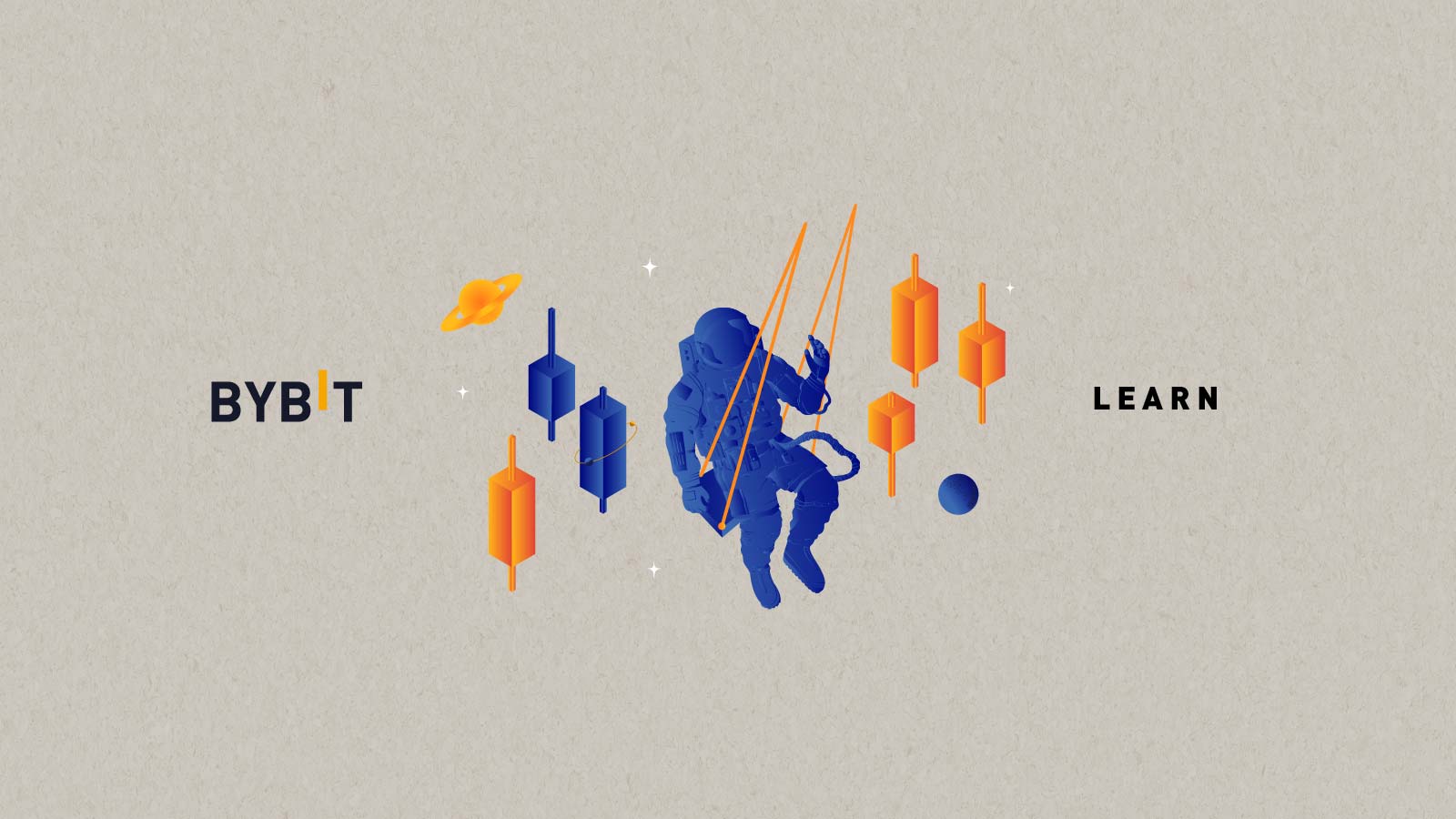 Swing trading is one of the most common trading styles, along with day trading and position trading. For beginners, this trading style is less intimidating since it’s less hectic than day trading but comfortable enough for traders to take advantage of the price fluctuations. Traders who favor this kind of trading style usually rely on swing trading indicators as it’s essential for them to show the support and resistance levels when the trend changes.

While using only an indicator is fine, but it’s not foolproof. After all, what’s the harm to diversify your options? Even the best swing trader relies on plenty of indicators to get the best results.

So today, you’ll find out what are some of the best swing trading indicators and the differences.

What is Swing Trading?

When you’re swing trading, the positions are usually held overnight and can stay open for days or weeks. In conjunction with the opened positions, the swing trader’s goal is to catch the trend, hoping for the next price swing to go in the expected direction for profits.

Price retracement is a common phenomenon when trading crypto or any financial assets. And the prices of the traded that move up and down can be referred to as swings. When swings happen, traders will capitalize on these occurrences for small gains and exit the trade before a significant trend shift. Although the profit for these trades may be small, if it’s executed consistently throughout the week, swing trading can still make up a substantial amount of gains.

There are of course traders who prefer a steady market or a volatile market. But ultimately, using technical indicators is an inevitable parameter in swing trading.

For example, most traders use the most prevalent Bollinger Bands to plot a number of standard deviations around a moving average. While some prefer the Average True Range indicator to quantify the volatility of the crypto market. Either way, swing trading indicators are essential to highlight the specific aspects of the price action to improve your decision-making.

Before getting more in-depth with analyzing the best indicators for swing trading, let’s go back to the swing trading process.

Swing trading is a trading style that comprises various strategies and behaviors that share some common aspects closely related to the time of a trade. While it is typically applied in forex and stock trading, it can go well with cryptocurrencies too.

With swing trading, you will hold your position open for several days or weeks, as long as the trend carries on in your favor. Traders would be interested in closing their position when the trend shows signs of reversal. Given that swing traders operate with larger timeframes, they are not interested in the short-term price volatility the same as day traders do. For swing traders, the only thing that matters is that swing highs go higher in a bullish market while swing lows go lower in a bearish market.

Swing highs are consecutive peaks touched by the price before fleeting moments of retracement. Sometimes the retracement can turn into a trend reversal, which breaks the consecutiveness of the swing highs. When the current swing high is higher than the previous peaks, we can distinguish a general uptrend.

Swing lows are consecutive lows that succeeded by the temporary moments of rebounds. When the current low is lower than the previous ones, we can determine a general bearish trend.

Some swing traders prefer to trade between swing highs and lows only, which usually becomes a shorter-term version of swing trading.

A swing trading indicator involves using mathematical calculations to determine various aspects of the price action based on historical data. It can be implemented on a daily chart or any other chart used by swing traders to assess the market situation.

These indicators help traders figure out whether the trend is bullish or bearish and if it has momentum, among others. While some swing traders use to trade the news and rely on fundamental analysis, technical indicators are imperative to determine the best entry and exit points.

The three most important types of swing trading indicators are the following:

We have compiled the best swing trading indicators that stand out due to their simplicity and efficiency of trading signals. However, it’s worth mentioning that in no way can they guarantee you consistent profits. That’s mainly because technical indicators don’t predict the future but help you better visualize the present and past.

Here are the six most popular and reliable technical indicators used in swing trading: 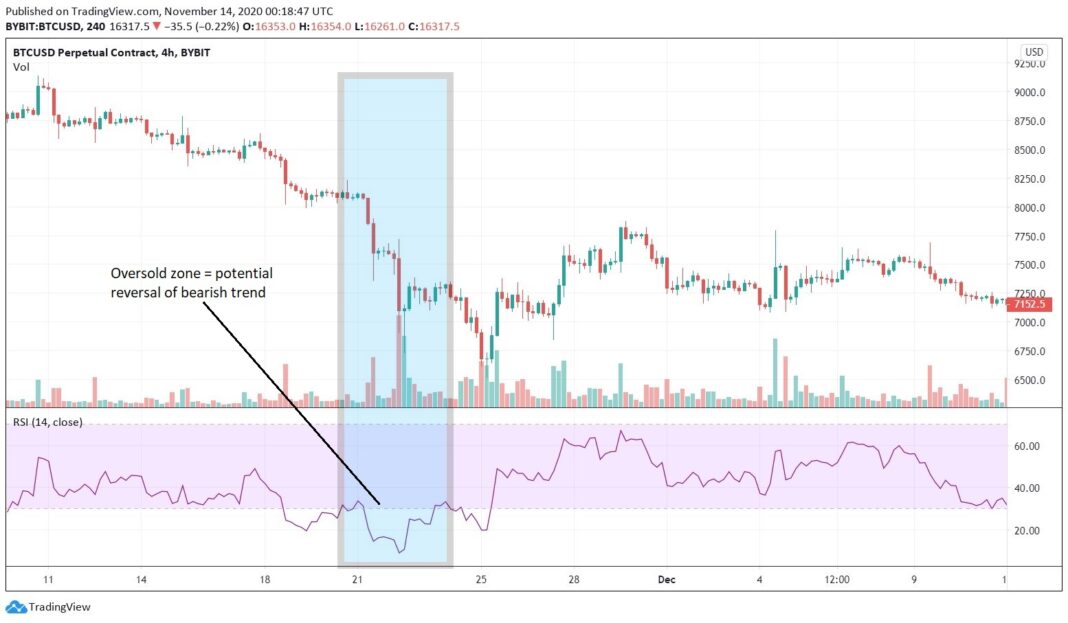 The RSI one of the most important crypto trading indicators. As a momentum oscillator, and you may find it under the category of ‘oscillators’ on your chart. It calculates the size and magnitude of the latest price changes. Swing traders use the RSI mostly to determine the overbought or oversold levels of an asset.

The RSI indicator is displayed as an oscillator, i.e., a line graph that moves between two extremes and can range between 0 and 100. The RSI line ascends when the number and size of bullish closes go up, and it declines when the magnitude of losses increases.

The most straightforward RSI signal occurs when the indicator breaks above the 70 levels; it suggests an overbought level and might anticipate an uptrend’s reversal. If the RSI enters the zone below the 30 marks, then it indicates an oversold market, meaning the bearish trend could end soon.

Another way to use the RSI is to look for centerline crossovers. For instance, when the RSI indicator breaks above its centerline, it points to a rising trend. 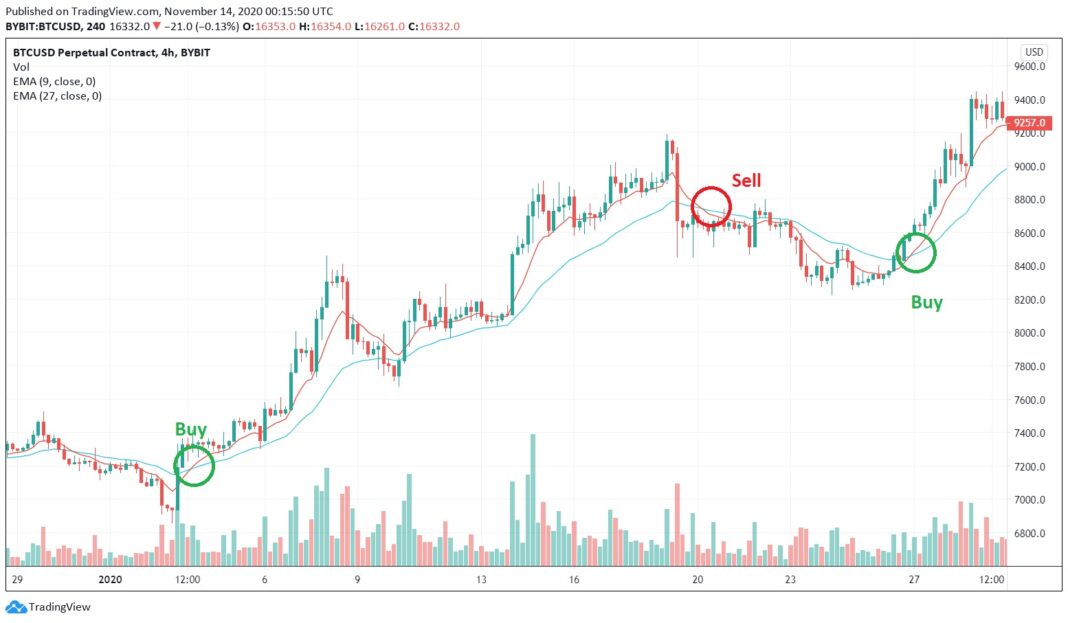 Moving average (MA) is the first technical indicator that have been used for decades for technical analysis of the commodities and company shares. As the name suggests, swing traders use MA to calculate the average of an asset’s price movement over a given period. As a result, MAs smooth out the short-term volatility that may appear confusing for traders.

It’s important to understand that MAs are lagging indicators and rely on past price action. Thus, it would help if you used them to confirm a trend rather than predict future moves.

We can distinguish between short, medium, and long-term MAs, depending on how many periods they monitor. For example, short-term MAs have a period between 5 and 50, while medium-term MAs have up to 100.

The best way to use MAs is to look when a short-term MA crosses a longer-term MA. If the former crosses the more extended MA from bottom to top, this is a bullish signal, and vice versa. 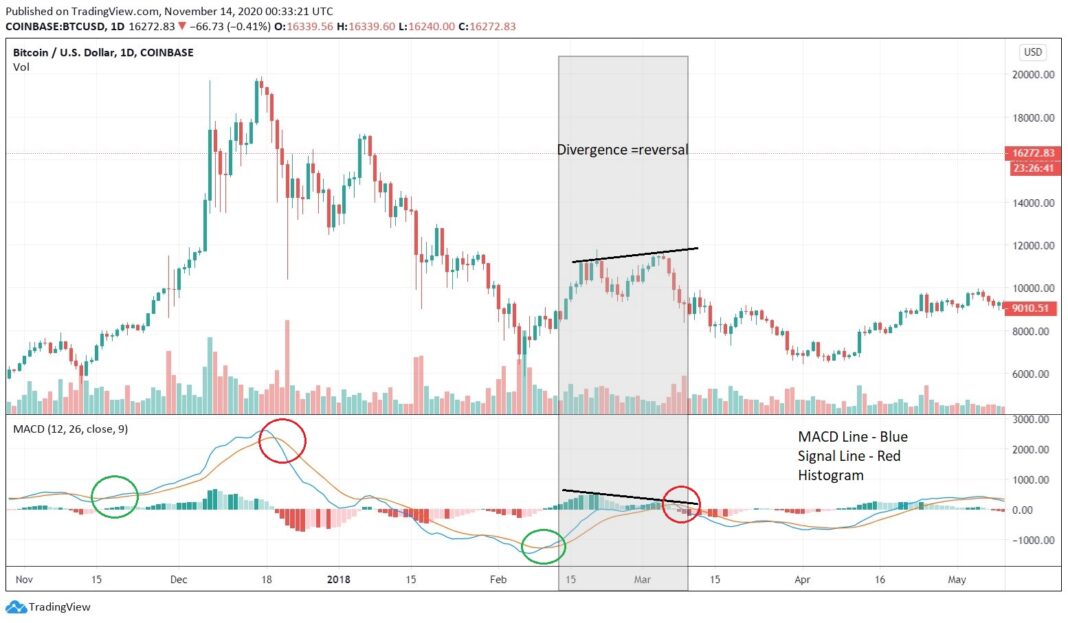 Moving Average Convergence Divergence (MACD) is a more complex technical indicator that merges two regular moving averages that we discussed above. The calculation of MACD is by subtracting the 26-period EMA from the 12-period EMA, though these parameters can be adjusted manually based on your needs. To be clear, the two lines displayed on the MACD chart do not represent the two MAs used for the calculations. Instead, here are the three elements of the MACD indicator:

Another way to use the MACD is to look for divergence between the histogram and the price action, which usually anticipates a trend reversal. 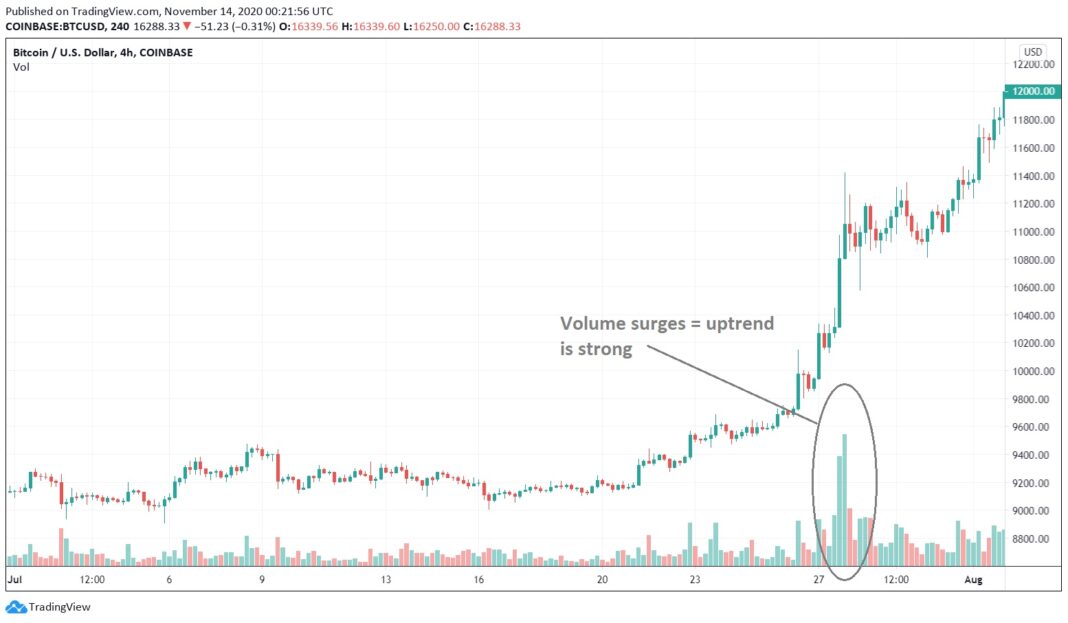 Volume is one of the most critical indicators for swing traders, though beginners often ignore it. This indicator can be shown by default below the main chart, and it offers insight into how robust is a newly formed trend. Basically, the volume indicator shows how many traders are buying or selling a cryptocurrency or asset at a given point. Thus, the higher is the volume, the stronger the trend.

Volume is especially useful with breakout strategies, i.e. when an asset’s price breaks above a resistance line or below a support line. If the breakout is accompanied by high volume, then the new trend is expected to be substantial. 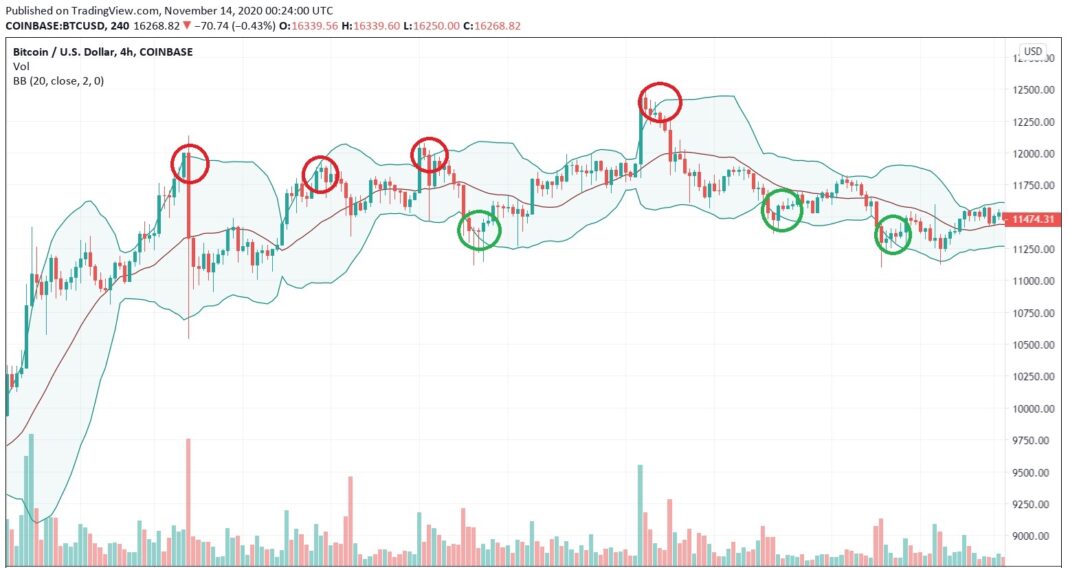 The Bollinger Band (BB) is a momentum indicator that consists of three lines – a moving average and two standard deviations, a positive and a negative one. Swing traders prefer this indicator because it quickly detects a trend, the overbought and oversold levels, and the volatility. Also, it looks nice and clear on the chart.

The width of the BB increases along with the volatility and declines when the market calms down. The closer the bands are to each other, the lower the volatility.

The point is that the price would always tend to move towards the center of the BB. If the band starts expanding, it means that a new trend is forming, and you shouldn’t be trading in a range anymore. 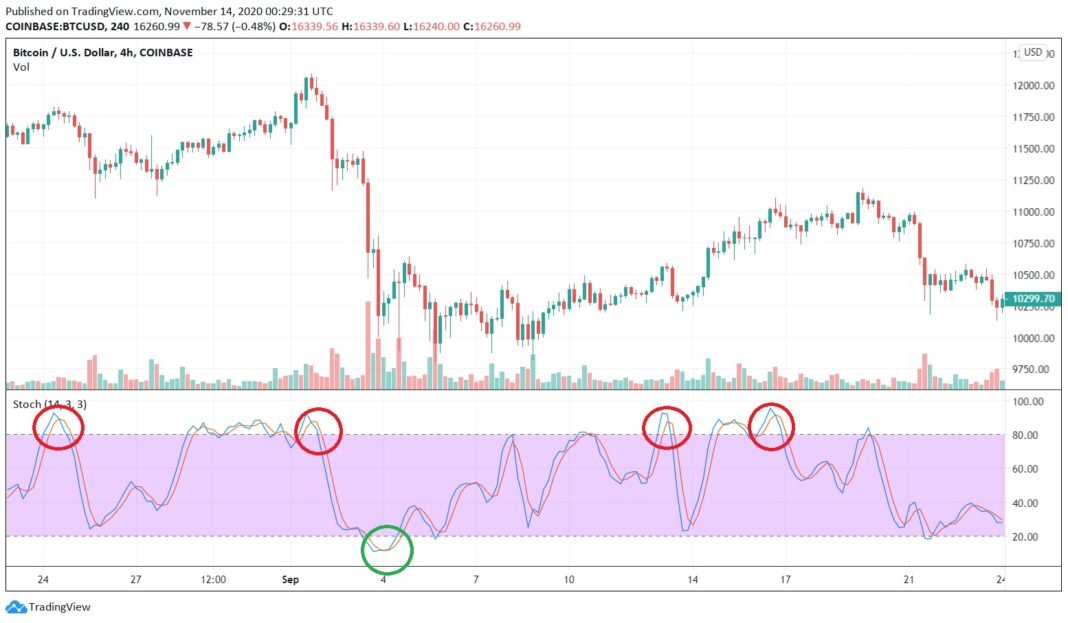 Stochastic is another momentum indicator, and it works quite similarly to the RSI, though it has different calculations. The indicator compares the closing price of an asset to the range of its prices over a certain period.

Like the RSI, the Stochastic is represented by a chart between zero and 100. Though in this case, the overbought and oversold zones are above the 80 lines and below the 20 lines, respectively.

Another different aspect is that it consists of two lines rather than just one as in the RSI. One line shows the current value of Stochastic, and the other one is a three-day MA.

Traders would use Stochastic to determine the overbought and oversold levels. They will also look for the two lines to cross, which generally anticipates a trend reversal.

Best Swing Trading Tools To Use

The described trading indicators can do a great job of providing relevant signals, but they will become even more efficient if you combine them with other chart tools. Here are some of them:

A swing trader should always operate with support and resistance lines since it’s the most relevant when determining an asset’s price point that has had trouble exceeding in the period.

Swing traders can also look for chart patterns, usually observed on candlestick charts. There are two main categories of patterns:

It would also be best if you used the indicators to monitor the positions while they are open. By doing this, you can exit the market at the right time and take the maximum profits.

Swing trading might be the ideal trading style for beginners, and the indicators can help traders benefit from the price volatility.

However, even though the price moves in swing trading are idle, you should not ignore the basic risk management techniques. By using a stop loss, you can prevent your balance from being wiped out.

Some traders might feel that these indicators don’t work as they expect. Still, technical indicators were not designed to forecast futures price moves with 100% accuracy but to help you make better decisions based on in-depth market insights.