The introduction of GameFi to the crypto scene has certainly been eventful. Ever since Axie Infinity first exploded onto the scene with its fun gameplay and engaging play-to-earn mechanics, the gaming movement took off as more teams sought to capitalize on the trend of gamifying crypto. This effectively lowered the barrier to entry and made crypto more accessible for mass adoption. All things considered, that’s why it’s unsurprising to see innovative projects like OpenBlox hop onto the GameFi scene in hopes of revolutionizing the way we view play-to-warn games.

Curious as to how this ambitious GameFi project intends to distinguish itself from the pack? Read on, as we cover everything you’ll need to know about OpenBlox, the BloxVerse ecosystem and its intention to merge various apps and games on one convenient platform.

OpenBlox is an EVM-based play-to-earn blockchain game where players can explore the digital world with their Blox in-game characters. On top of featuring a fleshed-out world of magic and wonder, OpenBlox also acts as an incubator that welcomes all kinds of NFT games and Web 3.0 apps into its ecosystem.

If you’ve been playing video games for years, you’ll certainly understand the pain that comes with your in-game assets and equipment instantly losing their value and vanishing into thin air when developers cease work on their games and shut down their servers. It’s ultimately this problem that compelled the OpenBlox team to pursue blockchain integration. Want to know why OpenBlox has us excited? Here’s what we know about its existing games and apps.

As the first Web 3.0 app to debut on OpenBlox, RunBlox is a move-to-earn app built on the Avalanche network that incentivizes users to stay active with its rewarding earnings and stylish shoe NFTs. With the RunBlox team consisting of former ByteDance and Runkeeper employees, RunBlox is in good hands as it seeks to integrate real-world interaction with the virtual world where OpenBlox’s Blox NFTs reside. Read more about Blox NFTs below.

Pegged as a turn-based deck-builder card game with role-playing game features, RogueBlox will be immediately familiar to anyone who has played popular rogue-like card games like the Slay the Spire. With deep battling mechanics and distinct classes and attributes, RogueBlox’s gameplay emphasizes the need for strategy, as players need to consider many variables before deciding how to best deplete their enemy’s energy reserves. With player-vs,-environment as the main game mode, users are welcome to try their hand at this beginner-friendly game that’s fun for players of all skill levels. For more information, check out RogueBlox’s dedicated white paper section.

Bloxes are collectible ERC-721 NFTs that act as the main characters of OpenBlox. With each game, Bloxes take center stage and act as the player’s avatar. From battling enemies in RogueBlox to getting a workout done in RunBlox, players will want Blox NFTs with the best attributes to guarantee success and increase their odds of excelling in OpenBlox. Winning nets you more OBX tokens and in-game tokens, which can be used to breed more Blox NFTs and Shoe NFTs and improve their overall stats so they get more powerful over time.

What Are OBX Tokens?

OBX tokens act as the main platform token of OpenBlox, featuring a ton of utility. On top of their use across multiple games, here are some ways users can utilize OBX tokens:

Given this much OBX token utility, the OpenBlox team hopes to create a deflationary effect so users will discover the value of holding their tokens in the long run. 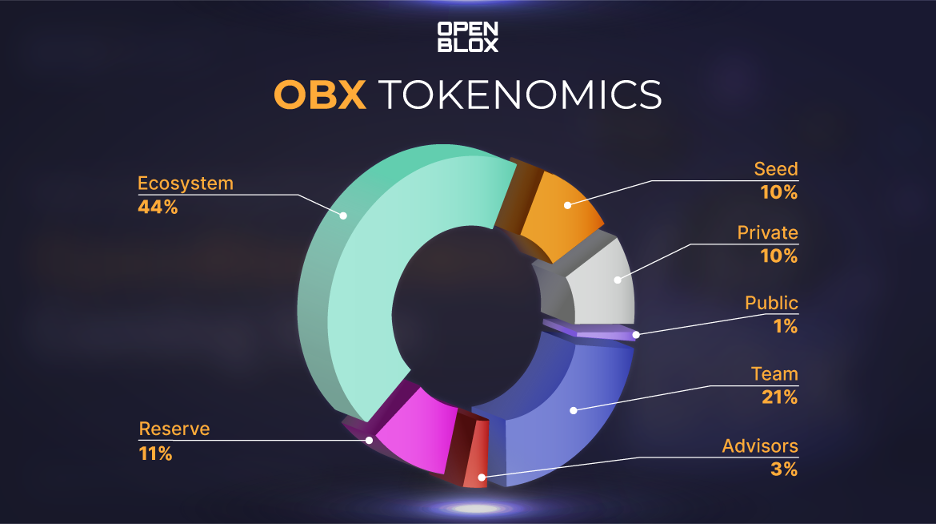 Interested in learning more about OBX’s overall tokenomics? In total, there’s a maximum supply of ten billion OBX tokens. While this large supply might spark fears and worries of inflationary pressures when it comes to the value of OBX tokens, the OpenBlox team has this aspect covered with the way OBX tokens can be used.

One such utility of OBX tokens is their necessity when users want to breed new Blox NFTs and RunBlox Shoe NFTs. By charging an OBX token breeding fee for each NFT, the team will generate a sizable community treasury that can either be used to burn OBX tokens, or for future feature implementations and improvements.

Excited OBX token investors can check out the Bybit Launchpad, where 100 million OBX tokens can be earned through either committing BitDAO (BIT) tokens or participating in the USDT lottery after signing up on Bybit.

Are OBX Tokens a Good Investment?

While play-to-earn NFT games and metaverse projects seem like a dime a dozen these days, they are filled with run-of-the-mill premises, bland gameplay and unsustainable tokenomics. This can ultimately make the Play-to-Earn scene seem unrewarding to get into as it can be hard to identify what distinguishes a solid project from a fast cash grab. Fortunately, OpenBlox makes this distinction easy and stands out from the bunch thanks to its ambitious roadmap of developing a fully fleshed out gaming ecosystem and focus on in-game asset ownership.

Don’t just take our word for it –- to reinforce our high praise of OpenBlox and OBX tokens as a good investment for the long haul, we can simply look at OpenBlox’s partners in this project. With notable venture capitalists like MZ Web3 Fund and Shima Capital backing the project, investors can be confident of OpenBlox’s long-term prospects as a play-to-earn game that will stand the test of time. It’s worth mentioning that OpenBlox is the first project in Yusaku Maezawa’s web3 investment portfolio.

In addition, a simple glance at what OpenBlox has in the pipeline will excite any gaming enthusiast. From ActionBlox (a massive multiplayer online role-playing game with social guild features) to LandBlox (a farming-style simulation game that lets you farm on land you’ve won from RogueBlox), the OpenBlox team is hard at work ensuring their upcoming games in the ecosystem are interlinked so that players can enjoy the different game genres and benefit from the synergy that links all of them together.

All in all, we’re confident that OBX tokens are a good investment for the long haul as the OpenBlox team launches more Web 3.0 apps and play-to-earn games that will scale up their BloxVerse ecosystem. This confers on OpenBlox the freedom to explore all kinds of unique and fun genres, and allows players to easily try out these games and apps if they’re interested in their premises. Ultimately, it’s this convenience of having fun games and apps within arm’s reach for players that makes OpenBox such an exciting project. We remain bullish for the future prospects of OpenBlox and OBX tokens as the OpenBlox team bolsters their ecosystem, while continually improving their existing apps and games.