Play-to-earn games are all the rage lately because they combine financial attributes and the appeal of gaming. However, with so many of these games on the market, it can be difficult to know which is the best game for you to play, especially from the point of view of an investor. If you’re on the fence, then you’re in luck! Monopoly Millionaire Game, the latest game to be launched, sets itself apart from other play-to-earn games is its recyclable economic model.

What Is the Monopoly Millionaire Game?

Monopoly Millionaire Game is a marine-themed game that gives players the chance to earn tokens through nine different engaging games.

Set in a marine ecosystem, players can purchase Cannon NFTs to launch cannonballs and hunt marine creatures. The unique catch about Monopoly Millionaire Game is that these NFTs can be “rebated” as long as the player logs into the game every day. This is because players will be able to receive a daily minimum amount of income, including gold coins, upon logging in. This amount is determined based on the star level of their Cannon NFTs. They can then use the gold coins to launch cannonballs and play games, which results in their earning a generous P2E income. Players can look forward to earning MMG tokens, gold coins and treasure chests, based on how long they play the game and the hunting objects they use.

There are a total of eight star levels for every Cannon NFT. Different star levels generate different amounts of rewards and have different life cycles. Lower star levels have shorter life cycles., which means that different Cannon NFTs have varying durations as you use them to earn MMG tokens. Once the Cannon NFT’s life cycle expires, you’ll no longer be able to use it to earn tokens. However, you can reactivate it by synthesizing the NFT to a higher level via the consumption of MMC tokens (see below) and two low-star cards.

Once you’ve achieved an 8-star Cannon NFT, you can choose to either continue using it to earn income, or sell it on the open market for a profit. According to the official Monopoly Millionaire Game website, the project team will regularly repurchase the Cannon NFTs on the market. The limitation of the life cycle provides exciting gameplay for existing and new players alike, and will also keep early players from dominating the game, thus minimizing the risk of “bubbling.”

Interested to know more? Here are some of the game assets you can expect when you play Monopoly Millionaire Game.

Marine Hunter is a fishing game that allows players to earn fishing points, depending on the type of fish they catch. At the end of each week, the total fishing points accumulated by each player will be ranked, and players who get on the list are entitled to rich rewards, such as gold coins, ocean essence and skill items. Those who have a higher Cannon star level will also receive higher returns.

Looking for something a little more laid-back? Opt for the Island Construction game, where you get to develop your own land and erect island buildings to gain bonuses. As you upgrade the buildings, you’ll unlock better bonuses, such as fishing points and discounts on competition registration fees, that will come in handy when you engage in competitive gameplay.

In order to construct and upgrade island buildings, you’ll need to use Ore, which can be obtained through daily and weekly tasks and other means.

Fish Pond is another casual game where you can spend some time building and upgrading to cultivate different species of fish. Doing so will enable you to earn gold coins and other rewards.

As you improve your fish pond, it will be awarded an ornamental degree which will then determine the number of diamonds, gold coins and other rewards you will get.

Can’t get enough of classical games? Have fun with Marine Treasure, a 3×5 slot game with an attractive single-player prize pool. In order to spice things up, you’ll also be able to see how fellow gamers are faring in real time. Be the first to hit the jackpot and earn tons of gold coins!

Ocean Match is a casual (but addictive!) 6×8 elimination game. Follow the rules and clear the stages as quickly as you can to earn more rewards.

Mini Match is a much simpler version of Ocean Match. It’s a 3×3, with simpler rules and faster elimination speed to provide a more stimulating gameplay.

As you might guess from its name, Fish Fight pits players’ fish against each other. The winner of the match leaves with the reward, and players can choose and purchase their favorite fish for the competition.

Treasure of Poseidon is a classic 4×5 slot game that lets you test your luck and try your hand at winning various prize pool rewards. In addition, you can win up to 50 million gold coins! Of course, the higher you bet, the higher the rewards. In order to make things even more exciting, you can also see the game results of other players in real time.

Fish Beauty Contest is a fruit machine game in which you bet on different fish to attain various multiplier rewards. If you’re lucky, you might even be able to win hidden jackpot rewards.

What Are MMG Tokens?

There’s a total supply of 1 billion MMG tokens, with 400 million allocated to the liquidity pool and 600 million set aside for the play-to-earn game.

What Are MMC Tokens?

MMC tokens are the main platform tokens of Monopoly Millionaire Game. You can earn MMC tokens both by playing the game, and by purchasing them through Bybit.

As the game’s primary governance token, the MMC token can be used in the following areas: 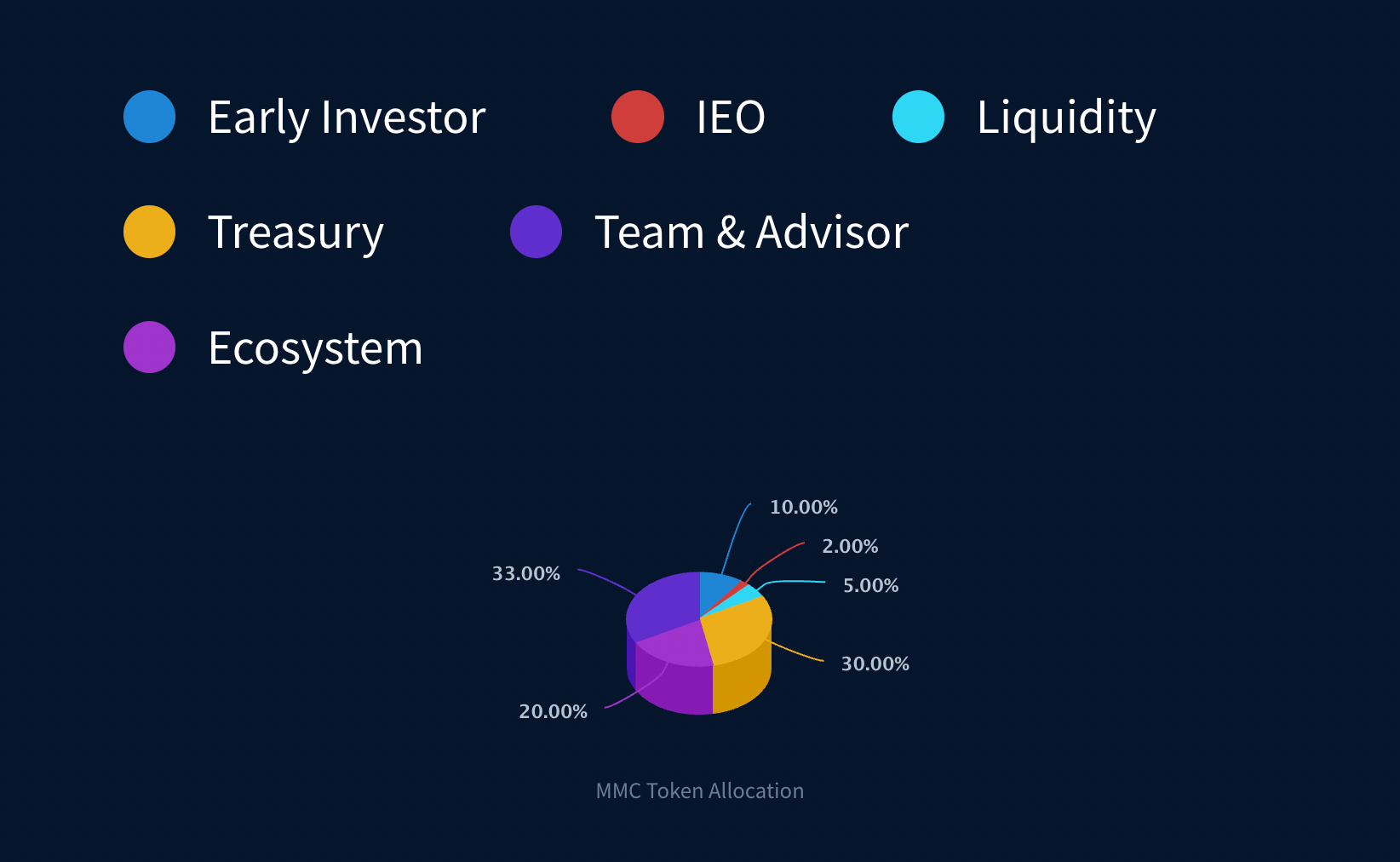 Now that we’ve covered the basics of the Monopoly Millionaire Game, let’s explore MMC’s overall tokenomics. There’s a maximum supply of 100 million MMC tokens. 30% of the total supply is allocated to the staking reward pool, 10% to the seed round, 5% to the DEX liquidity pool, 2% to the initial exchange offering, 8% to private sale, 25% to the treasury for community reserve and user acquisitions, and 20% to the team.

One use for MMC tokens is for players to upgrade their existing NFTs and increase their cards’ Cannon star levels to generate more rewards and income. The success rate for the upgrade decreases as the star levels get higher, creating a demand for MMC tokens. In this way, players will continue playing the game to earn more, and more tokens will be consumed as they upgrade their NFTs. This creates a cycle which ensures that the supply of MMC tokens is maintained over the long run.

Excited to start earning with the Monopoly Millionaire Game? You can start investing today at Bybit Launchpool, where 1.2 million MMC tokens can be earned through committing BitDAO (BIT) tokens.

Are MMC Tokens a Good Investment?

Play-to-earn (P2E) games have been rising in popularity ever since they were first introduced, and it’s not hard to see why. If you’re a gamer who’s up for a new challenge, or an investor looking for the next big thing, the
Monopoly Millionaire Game is certainly one that’s not to be missed. It strategically combines classic mini games with the ability to earn a stable income, regardless of how long you’ve played. Furthermore, it also boasts a daily minimum income, making the barrier to entry rather low.

Monopoly Millionaire Game’s core team comprises three highly experienced gamers within the blockchain industry. Angle, the founder and CEO in charge of game operations and strategic partnerships, was a part of one of the world’s top 500 gaming companies back in 2016. He joined their top R&D team in 2019, where he gained more experience in creative planning and design execution. Daniel, the cofounder in charge of game technology and R&D, worked as a senior chief programmer in one of the world’s top 500 gaming companies. He led his R&D team and took part in publishing and operational capabilities. Jack, the head of global marketing in charge of public relations and community growth, started his marketing career back in 2011, going on to become a marketing director in 2014. His long-standing career has allowed him to gain more experience in marketing, blockchain community building and user growth strategy.

With such a stellar team and reputable investors such as Crypto J and Mirana Ventures backing the game, you can be assured that Monopoly Millionaire Game will offer exciting gameplay and an attractive economic model for investment.

In closing, it‘s evident that Monopoly Millionaire Game’s MMC tokens are a superb addition to any crypto portfolio. The team’s extensive experience in the gaming and blockchain industry, as well as its commitment to giving every player an equal chance to earn a stable income through its recyclable economic model, demonstrate that the game is here to stay. In fact, the team is also working toward introducing high-quality third-party games in the near future to ensure a good mix of games to keep their players enticed. With such dedication, we’re certain that Monopoly Millionaire Game will be the next big thing in GameFi.