From the mass appeal of Axie Infinity that got gamers hooked on its casual, strategic gameplay to the explosion of move-to-earn games that rewarded players for breaking a sweat, GameFi is an ever-expanding genre that’s pushing the boundaries of gamification in the crypto space. This is especially so with ambitious GameFi projects like Land of Conquest. Unlike first generation GameFi projects, the Land of Conquest stands out from the pack by exploring deeper gameplay mechanics and having an established team of game developers at the helm.

Keen on finding how Land of Conquest has the potential to make a splash in the GameFi scene? Read on, as we include everything you need to know about Land of Conquest, the game where you can wage tactical wars with cool Mech and Hero NFTs.

What Is Land of Conquest?

Land of Conquest is a next-generation multiplayer blockchain game where players are given the freedom to explore the apocalyptic world. Players can choose to be a landlord and focus on construction, development, training and resource production of their land, or be a hero and focus on gathering resources through completing PVE and PVP combats.

Set in the Triangulum Galaxy, Land of Conquest is the only continent on the planet that people can inhabit after a global biochemical war occurs. Ferocious monsters of various difficulty levels invade the land and players have to quickly build the city and defeat them. At the same time, players can also choose to attack other cities either alone or in an alliance and the winner will emerge with the basic resources of the loser partially seized.

Socialization is a core foundation of the game, and players are encouraged to communicate with one another to share tactics, cooperate, and even negotiate with the enemy. Players don’t have to worry about any language barriers, as Land of Conquest is equipped with a strong multilingual translation system to ensure efficient communication in real time.

What sets Land of Conquest apart from other games is that there are multiple ways to earn as you play. Here are some of the game assets you can expect when you play the game, with more to come in due time.

Land NFTs are one of the highly raved game assets. There are a total of 25 areas, with 22,500 Land NFTs for sale. Each piece of land is an independent entity which players can acquire through purchasing or leasing in the market.

Upon purchasing a Land NFT in Land of Conquest, players have to build up their base by strategically choosing what to build first, based on how much time and how many resources they have. Some of the buildings they can construct include:

All the buildings are equally important; landlords have to prioritize the ones they want to build first. As they level up, landlords are able to unlock more options when it comes to developing their land. The ultimate goal is to keep developing their land to increase its value — which will result in more resources, including tokens and NFTs being produced.

If you’re more interested in battling it out with monsters and with other players in PVE and PVP combat, you can look into purchasing Hero NFTs. Each Hero NFT has different attributes and stats. The better they are, the better the chances of winning the combat. With Hero NFTs, you can also win in-game tokens and NFTs that can be used to improve your overall stats.

Mech NFTs that provide extra attributes are available for those looking to improve their fortress, as well as the defense force and the development of the city. Like Hero NFTs, different Mechs have different attributes. Earn more tokens to get the best Mech NFT and defeat other players.

What Are XTAL Tokens?

Referred to as Land of Conquest’s satellite token, XTAL tokens are obtained through gameplay and act as the game’s play-to-earn reward. Specifically, players reap XTAL token rewards when they deploy their Hero NFTs into battle. This creates a reward cycle, as XTAL tokens can then be used to upgrade the attributes of Hero NFTs.

What Are SLG Tokens?

SLG tokens are the main platform tokens of Land of Conquest. You can earn SLG tokens both by playing the game and by purchasing them through Bybit.

As the game’s primary governance token, the SLG token can be used in the following areas: 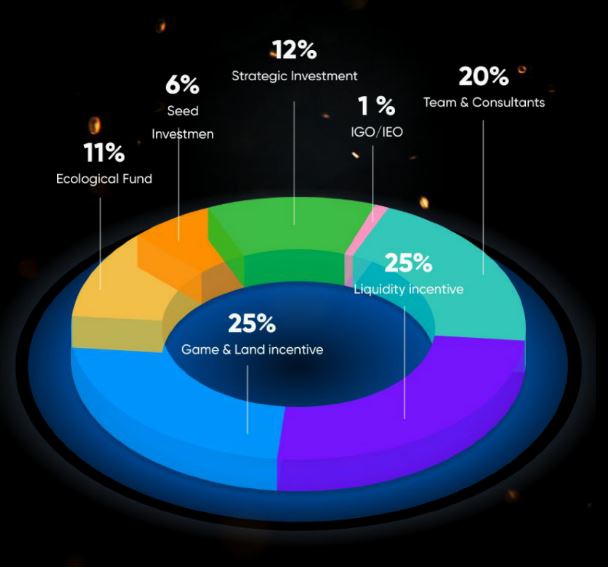 Curious about SLG’s overall tokenomics? In total, there’s a maximum supply of one billion SLG tokens. While this large supply might spark fears and worries of inflationary pressures when it comes to the value of SLG tokens, the Land of Conquest team has this aspect covered with the way SLG tokens can be used.

One such SLG token sink is the buying of NFTs on the game’s marketplace. With NFTs being exclusively purchasable via SLG tokens, this creates a handy use case for players who want to gain an advantage while waging their battles. It’s because of token sinks like these that allow SLG tokens to flourish as their supply is managed in the long run through creative forms of utility.

Keen on jumping on board the Land of Conquest hype train? You can start investing today by checking out Bybit Launchpad, where 10 million SLG tokens can be earned through either committing BitDAO (BIT) tokens or participating in the USDT lottery after signing up on Bybit.

Are SLG Tokens a Good Investment?

With the growing interest in P2E, it isn’t surprising that more companies are jumping on the bandwagon to launch their own play-to-earn games. What sets Land of Conquest apart is its harmonious combination of a classic and traditional strategy game with desirable financial attributes. On top of this, the game also boasts a full line of detailed assets to aid in immersion as players enjoy the deep and strategic gameplay.

All of the core team members of this project are from reputable institutions within the blockchain and gaming industries, such as Huobi, Elex Game Studio and ChangYou.com. Furthermore, the project is backed by well-known venture capitalists like NGC Ventures and Huobi Ventures. Not only can you be assured that Land of Conquest will offer stunning visual designs, an exciting game framework and a healthy economic model that will keep you hooked, but it will also be a great investment.

For a more polished try at Land of Conquest, players can look out for the Closed Beta testing phase, set to launch at the end of August. During that time, the player base will expand as more users hop onto the game’s platform to see what all the hype is about.

Overall, Land of Conquest’s SLG tokens seem to be a solid long-term addition to any crypto portfolio — thanks to the team’s dedication to delivering a project that’s unlike the usual GameFi fare. From plans to launch on Android and iOS devices to a full-on Guild Wars, it’s clear Land of Conquest has plenty of potential to capture mobile gaming audiences and fans of strategic MMOs (massive multiplayer online games).Ultimately, it’s this mix of GameFi innovation and willingness to lower the barrier to entry for non-crypto native players that gives Land of Conquest an edge in the gaming scene. That’s why we’re confident enough to say that we’re bullish on Land of Conquest and its SLG tokens, as they further flesh out their game and achieve their long-term vision of becoming a household name in the blockchain gaming space.