If you’re looking for something a little more singular, you’re definitely in luck. DEFY is the latest move-to-earn game to be released. What sets it apart from other GameFi projects is that it’s the first move-to-earn game which includes augmented reality (AR) in their gameplay. What’s more, DEFY immerses players into a future dystopian world where they have to fight the Future Systems dictatorship.

Excited to learn more about how DEFY is revolutionizing the metaverse? Read on, as we include everything you need to know about DEFY, the game where you take on the role of an operative to overthrow Future Systems.

DEFY is a move-to-earn mobile game that combines elements of the virtual and physical worlds to provide an immersive metaverse experience. Players get to experience hyper casual code-breaking gameplay, explore the real world, go on AR adventures, and — in the future — also take part in learn-to-earn missions where they can acquire the basics of coding and other valuable skills.

Set in a futuristic dystopian world, Future Systems, a faceless corporation, has gained total control over global networks that power the internet through their influence. They had claimed to give free access to the internet to the world; however, privacy and individuality are no longer rights. Instead of looking to the government for health, education and finance, people now depend on Future Systems for their basic necessities.

With such a dictatorship comes individuals who are dissatisfied. Kha0s, a mole who works as a systems administrator at Future Systems, wants to take down the entire corporation, but he can’t do it alone. Players take on the role of operatives, joining Kha0s in his fight against Future Systems by hacking into their network through an exploited mobile app and stealing the new world currency, FCOIN, from wallets.

In order to facilitate the mission, Kha0s has created NFT Virtual Private Masks for operatives to conceal their identities from Future Systems. However, Future Systems has security and defenses in place, and it’s important for operatives to be careful when moving around. If the drone defense system detects you, it will hunt you down and leave you no choice but to either outrun the drone or shut it down with an Electromagnetic Pulse device (EMP).

As Future Systems has used cell towers to take control over global networks and made FCOIN the new world currency, all transactions made by the general population go through Future Systems wallets. Each cell tower has a hexagonal boundary that divides the wallets into groups. Once the total value of funds in all wallets exceeds a certain amount, the funds are transferred back to their Future System’s headquarters.

Once you access a cell tower’s hexagon, you can initiate a hack on the tower, which involves a series of challenges to correctly identify the location of a given code in a grid of characters. These challenges have to be completed within a specified period of time, depending on the security level of the tower, before Future Systems detects you and kicks you out of the system. The security level is determined based on the total value of funds in all wallets in the tower’s hexagon. When the total value of funds is higher, the security level is also higher, resulting in less time for you to complete the challenge.

After the hack is successfully completed, the tower will be taken offline for an hour. During this period, you’ll have to locate the wallets around that geographic area and steal their data, which will take a while. Once the transfer is complete, it will appear in your inventory as an unbanked encrypted wallet. Decryption takes place at a later stage, and you can continue to collect more unbanked wallets first before decrypting them altogether.

Of course, to make the game more challenging, operatives will face Automated Repair and Maintenance drones (ARMs) that will deploy upon successful hack completion. It’s important to note that certain actions on the part of operatives generate heat, which is what the ARMs will use to detect your location. Each unbanked wallet in your possession will also contribute an amount of heat, thereby increasing your chances of detection. In order to avoid being caught by the ARMs and fined, you have the choice of firing an EMP device to disable all drones within a certain radius, or using an anti-drone weapon.

All wallets are encrypted using a multi-key elliptic curve scheme. In order to decrypt the wallets, you’d normally have to employ complex hacking techniques to extract their contents. Luckily, Kha0s has developed a sophisticated hacking tool kit that will expedite this process.

There are a total of four wallet security levels — Low, Medium, High and Maximum — which suggest the amount of FCOIN contained within them. Hacking wallets requires completing a simple puzzle that Kha0s has devised to simplify the decryption; the puzzles are harder to solve for wallets with higher security levels.

If you find it too challenging to decrypt the wallets, you’ll soon also be able to submit requests to the Community Decryption Queue and request other operatives hack into the wallet for a share of the loot. You’ll be able to specify the percentage split when you submit the request. Of course, offering a higher cut of the loot will result in the wallet’s prioritization — and therefore lead to the wallet being decrypted sooner.

In order to start playing DEFY, you first need to own a Virtual Private Mask NFT. All free-to-play users will be given a complimentary generic NFT mask upon account creation to kick-start their gameplay.

Users can also choose to purchase premium NFT masks through the in-app purchase of the premium starter pack, or acquire them through the DEFY Genesis Mask NFT mint. Premium mask holders will be entitled to more benefits than generic mask holders, such as access to certain play-to-earn elements and the ability to convert stolen FCOIN into DEFY tokens. Premium masks are also upgradeable in the game through forging, which allows players to customize their NFT masks with aesthetic and functional upgrades.

Other than upgrading your NFT mask, you can also build your own drone and customize other in-game NFT assets.

Operatives who destroy Future Systems drones can create their own personal drones using the parts collected from the destroyed ones. These personal drones come with a starting range and basic features that can be upgraded by purchasing items on the in-app Black Market, trading with other operatives, or by leveling up. The drones can be programmed to complete tasks such as withdrawing FCOIN (available from hacked wallets) by flying to their locations before returning to the player.

Those players who own personal drones have the option to purchase AR Hangars, which are customizable virtual spaces for players to put their drones on display. These spaces can also be visited by other operatives.

DEFY also allows players to generate and sell their own NFT assets for FCOIN and DEFY tokens. Some of the items that can be generated for a profit include NFT mask upgrades, drone skins, AR Hangar items and other in-game assets.

Referred to as DEFY’s in-game currency, FCOIN is obtained through gameplay and acts as the game’s play-to-earn reward. Specifically, players reap FCOIN rewards when they successfully decrypt stolen wallets and complete in-game tasks. This creates a reward cycle, as FCOIN can then be used to purchase and upgrade in-game NFT assets.

Premium mask holders can send their FCOIN to Kha0s’ treasury. Every fixed interval, a predetermined number of DEFY tokens will be distributed to players who have sent in their FCOINs during the specific time window. The amount received by each operative will be dependent on their contribution of FCOIN tokens.

What Are DEFY Tokens?

DEFY tokens are the main platform tokens of DEFY. You can earn DEFY tokens both by playing the game and by purchasing them through Bybit.

As the game’s primary utility token, DEFY can be used in the following areas: 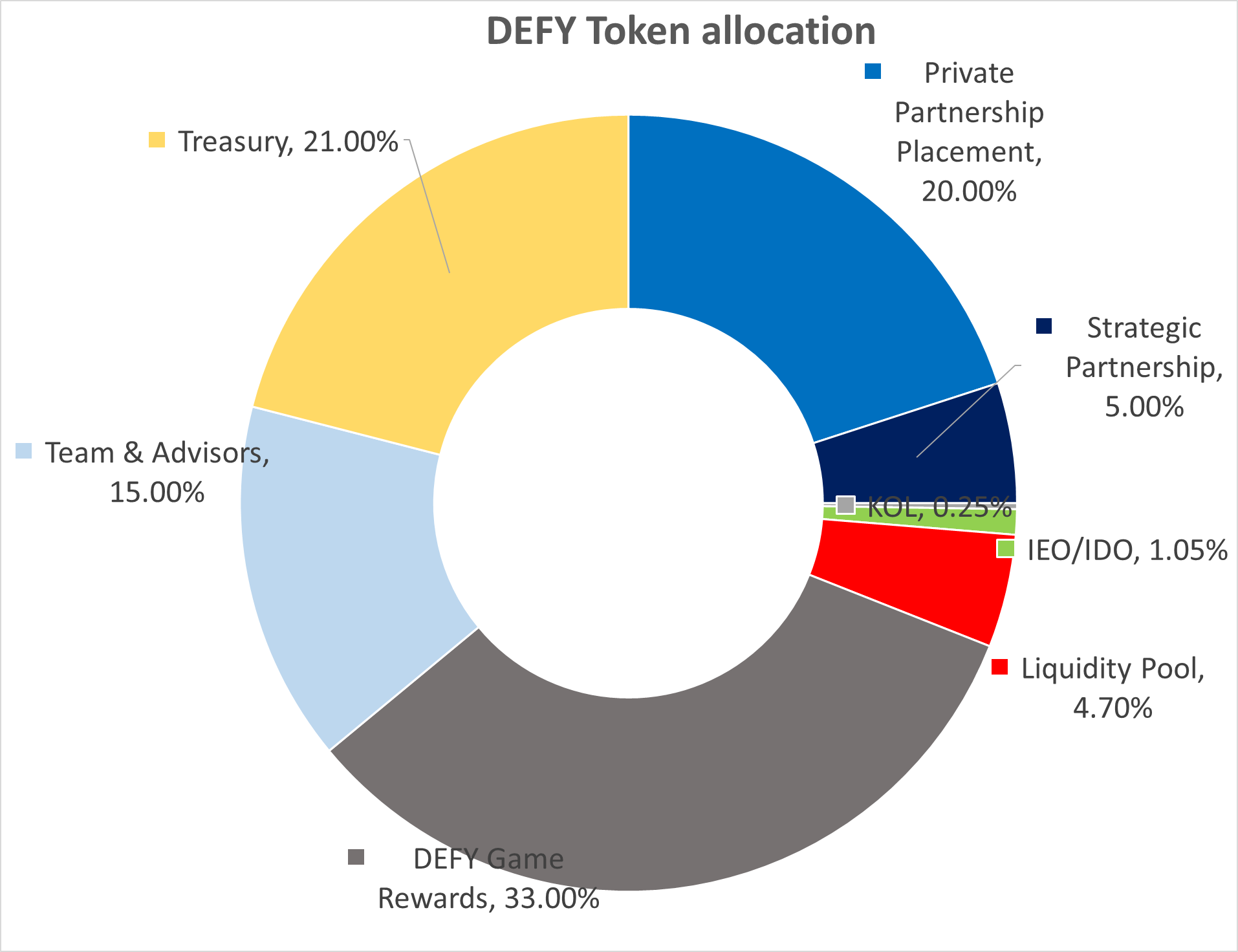 Now that we’ve gone over the foundations of DEFY and its gameplay, let’s explore its tokenomics. There’s a total supply of 2.5 billion DEFY tokens, with 33% reserved for game rewards. 21% is allocated to the treasury, 15% to the team and advisors, 20% to private partnership placement, 5% to strategic partnership, 1.05% to initial exchange offering/initial DEX offering, and 0.25% to KOL. The remaining 4.70% is kept to maintain liquidity.

In case you’re concerned about inflationary pressure on the value of DEFY tokens since there won’t be any burning or extra minting of DEFY tokens, rest assured as DEFY offers various forms of token utility.

One of the uses of DEFY tokens is for players to purchase in-game NFTs within the game’s marketplace. These include customizable personal drones, which are key to the gameplay, and premium masks that grant players access to additional benefits. This creates a cycle in which players obtain more DEFY tokens in order to upgrade their gameplay experience in DEFY, thus maintaining the long-term supply of DEFY tokens.

Ready to join the revolution and take on Future Systems? You can start investing today at Bybit Launchpad, where 18 million DEFY tokens can be earned through either committing BitDAO (BIT) tokens or participating in the USDT lottery after signing up on Bybit.

Are DEFY Tokens a Good Investment?

DEFY is certainly an intriguing game to get behind, thanks to its adrenaline-pumping storyline and its use of AR to bridge the virtual and physical worlds. Gamers will be amazed at the AR graphics, while investors will be satisfied with the DEFY token’s utilities and value.

DEFY is set to take on greater heights in the near future, as the developer team continues to innovate and launch more ways to enhance the gameplay experience with consumables, collaborative in-app missions, community builder tools, more extended reality gameplay, a PVP mode, and even an entire web series professionally done alongside a production house to further develop the storyline.

It’s also impressive that the core team members of this project have years of experience in the blockchain and gaming industries, with many of them leading their own strategic teams prior to creating DEFY. Furthermore, the project is backed by well-known venture capitalists like Animoca Brands, Spartan and PathDAO. As such, not only can you be assured that DEFY will offer addictive gameplay, stunning graphics and a healthy economic model that will keep you hooked, but it will also be a good investment.

DEFY is currently available to play in the Closed Alpha testing phase, but if you’ve missed that, you can watch out for the Public Beta that will launch sometime in Q3 of 2022.

The DEFY game’s DEFY tokens seem to be a great long-term addition to any crypto portfolio. The future of the project looks promising, especially since the team is dedicated to delivering even more innovations that distinguish it from those of other GameFi projects. It’s also worth noting that DEFY’s NFT Mint phase previously sold out within 13 minutes, so if you’re looking to take part in the next mint just in time for the Public Beta, you’d best be prepared for some ferocious competition.

It’s evident that DEFY has a lot of potential, and we’re excited to see all of the DEFY team’s upcoming innovations.