The play-to-earn (P2E) gaming space is growing at an astounding rate, with a forecasted estimated worth of $2.8 billion by 2028. While there are already quite a few big players in the space such as Alien Worlds and Axie Infinity, Vulcan Forged has captured the attention of many avid P2E gamers.

If you're wondering what Vulcan Forged is all about, this article will explain everything you need to know about the project, its functions, its native token and its investment potential.

What Is Vulcan Forged?

Vulcan Forged has over ten games and DApps in its ecosystem, as well as a flourishing NFT marketplace. Its main game is VulcanVerse, an MMORPG (massively multiplayer online role-playing game) game inspired by Greco-Roman mythology.

The main objective of players in the VulcanVerse is to own and upgrade land plots, which are represented by NFTs. These land plots start at Level 1 and can be purchased in the game-native NFT marketplace. Players can move up the seven levels, reaching a higher rank and unlocking new in-game features, tools and collectibles.

PYR is the primary utility token of the platform, used for buying NFTs in the Vulcan Forged Marketplace and staking in-game assets and land plots, as well as staking in VulcanDex, a decentralized exchange (DEX) for exchanging gaming tokens.

LAVA is the secondary utility token of the Vulcan Forged platform. It’s a play-to-earn in-game currency in all Vulcan Forged games, such as VulcanVerse and Forge Arena. There are several ways to earn LAVA tokens: Either winning matches or upgrading your land, or easily boost your LAVA tokens by staking your PYR tokens in your wallet through the LAVA Appreciation Program.

After earning your LAVA tokens, you can use them to buy materials and in-game assets or upgrade land. LAVA tokens can also be traded for PYR, USDC and more tokens on VulcanDex.

PYR, the main utility token of Vulcan Forged, is an ERC-20/MATIC token that players can use across all games. It powers the project's whole DApp ecosystem. PYR can be used to perform the following functions:

The fees from all PYR transactions are distributed to a reward pool from which staking participants can claim their staking rewards.

The PYR token is available on the Ethereum and Polygon mainnets. While the project was initially launched on Ethereum, most features use the Polygon version. By porting PYR to Polygon, a Layer 2 scaling solution, gas fees have significantly lowered. Consequently, the platform executes high-speed transactions seamlessly without high costs.

Note that PYR|ETH and PYR|MATIC are different, so do practice caution when you make your transactions to prevent an irreversible loss if you use the wrong token version. You can easily convert PYR from one token version to another with Polygon's bridging service. 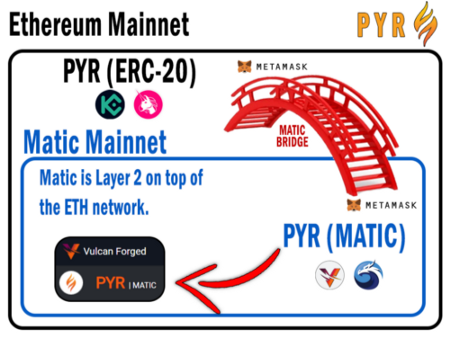 Below are the key features of the Vulcan Forged ecosystem.

In VulcanVerse, players can buy and own land plots which are available as NFTs on parts of the map. Vulcan Forged users can unlock more features and tools and gather Vulcanites (pet collectibles) to level up in this virtual world. Players can also earn PYR rewards as passive income by staking their in-game assets.

The major assets you can own in the VulcanVerse are Land, Vulcanites, Gods and Items. Players can use the in-game Vulcan Forged Marketplace, Vulcan Market, to buy and sell these acquired assets.

Players can also build quests and adventures in the VulcanVerse, scavenge for NFTs and fight against other Vulcanites. 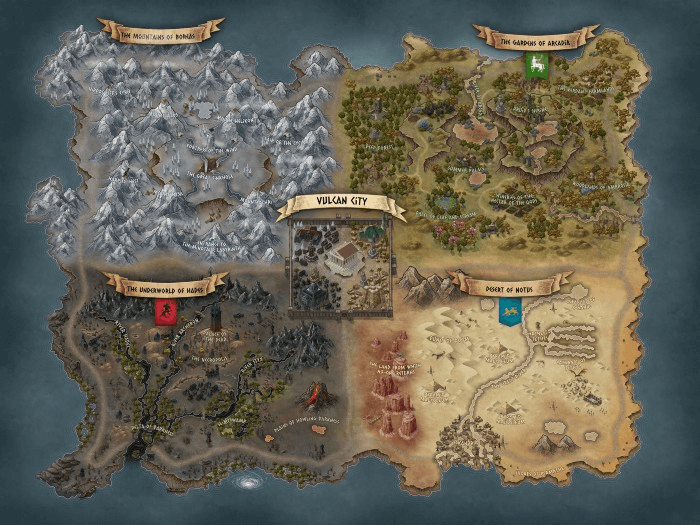 VulcanDex is the exclusive Vulcan Forged decentralized exchange (DEX) that allows you to swap gaming and cryptocurrencies such as PYR, LAVA, ETH, MATIC, UDSC and more. You can also provide liquidity to the DEX and earn 0.2% fees on all trades proportional to your pool share. The DEX also lets you stake and farm tokens to earn more interest on your tokens.

Vulcan Forged (PYR) has a total and max supply of 50 million PYR tokens and a current circulating supply of around 24 million. PYR is a deflationary token; 10% of every transaction is allocated to reward pools and 5% is used to buy back and lock supply. Currently (September 13, 2022), it has a live market cap of $94.71 million, with a 24-hour trading volume of $25.66 million.

The total supply of PYR tokens has been distributed as follows: 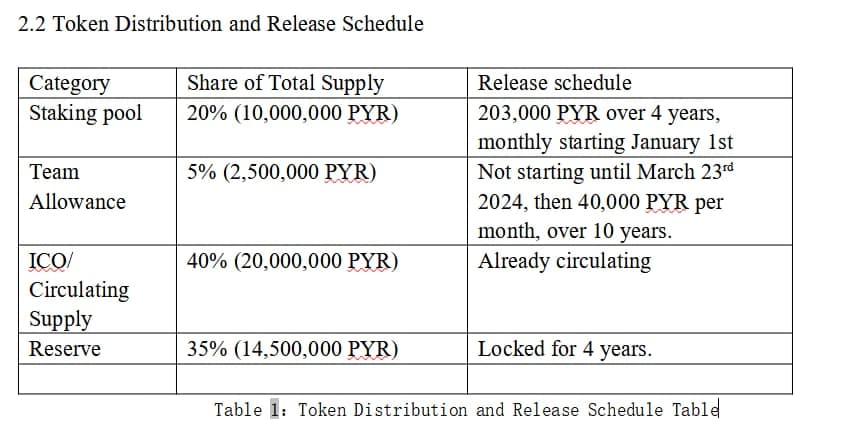 Vulcan Forged launched in mid-April 2021 at around $2. It traded sideways for several months before seeing an uptick in price from mid-September, experiencing a rally that culminated in its highest price ever at $49.01 0n December 1, 2021, during the crypto bull run.

The crypto crash followed soon after, and the high PYR price was unable to hold, rapidly sliding to a low of just around $8 within one month. While the PYR price rose to almost $20 three months later in April 2022, this high price was again short-lived and declined to around $4 in May. Since then, the price of Vulcan Forged has settled in a $3 to $4 range, currently trading at $4.06 as of the time of writing (September 13, 2022). 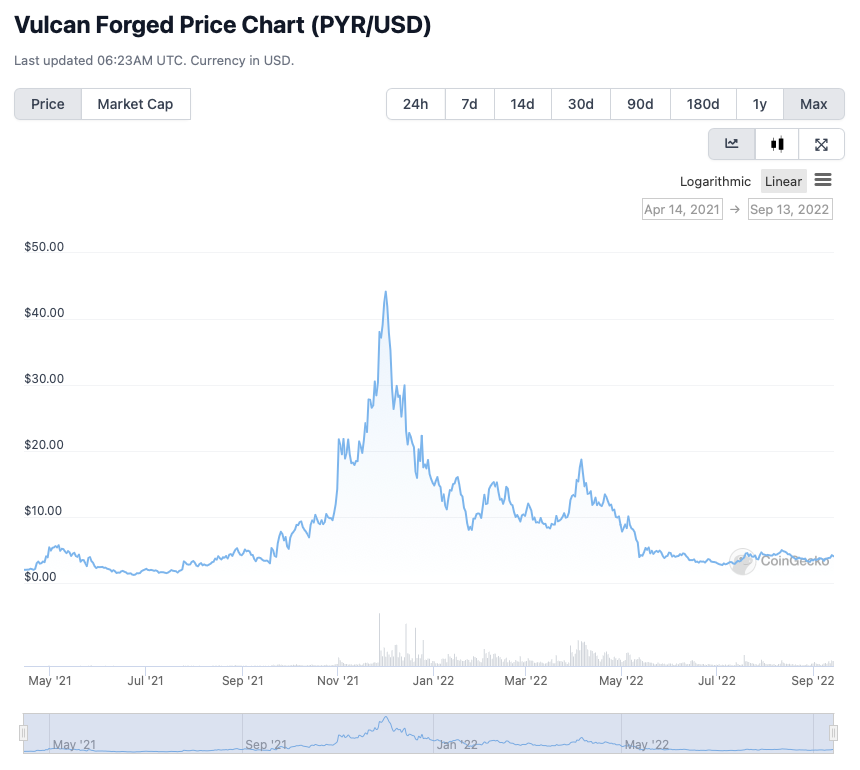 Despite the relatively low price Vulcan Forged is trading at, many price experts have a positive outlook, expecting the Vulcan Forged (PYR) price to rise steadily.

There are very few blockchain gaming platforms that can beat Vulcan Forged in terms of its ecosystem’s variety of features, including a game studio, DApp incubator, NFT marketplace and DEX. Its historical performance also underlines its potential to be among the top GameFi cryptos. Moreover, the Vulcan Forged team has showcased their efforts in making blockchain gaming affordable for all as they shift from Ethereum to Polygon, which offers almost zero gas fees and fast settlement times in a bid to solve Ethereum’s scalability problem.

However, hacking crimes are a real concern for all cryptocurrencies. Vulcan Forged suffered a security breach on December 13, 2021, in which 4.5 million PYR tokens were stolen. While it may be quick to recover with a relaunch of its tokens, this incident serves as a grim reminder that all investors must be cautious before purchasing any crypto or NFT assets. The wise approach is to never invest money that one cannot afford to lose.

As an all-in-one stop for all GameFi features, including NFT marketplaces and a DEX, Vulcan Forged has definitely made its mark on the blockchain gaming space. Moreover, the transition to the Polygon network has only increased the platform’s appeal as transaction costs fall to almost zero. This signals a serious commitment from the Vulcan Forged team to make its games more widely available and user-friendly for all players, making Vulcan Forged a GameFi project to watch as P2E games grow in popularity.