Long before Facebook rebranded to Meta and popularized the concept of the metaverse, there was UFO Gaming.

After years of building and development, the visionary team at UFO Gaming finally gave the world access to its Dark Metaverse through a much-hyped launch party held in late July 2022.

But with so many metaverse-themed projects mushrooming around the crypto space, what sets UFO Gaming apart? Is it the next eSports giant?

Let’s immerse ourselves in the Dark Metaverse and find out.

What Is UFO Gaming?

UFO Gaming is a community-owned, decentralized play-to-earn (P2E) gaming platform on a mission to build a bridge from traditional gaming to blockchain. The project’s goal is to leverage blockchain technology to unlock the infinite possibilities of the virtual world.

Its DAO governance structure ensures that the project is fully decentralized and focused on empowering its community.

Powered by its utility token, UFO, this next-level gaming project has created an ecosystem that incentivizes you to earn while playing. It has a staking DApp that lets you stake and mint, and earn rewards. You can also own virtual land and other valuable digital assets through NFTs with real-world monetary value.

Apart from the creation of a Dark Metaverse, UFO is keen on making its mark on the multi-billion-dollar eSports industry through tournaments, streaming and sponsorships.

UFO’s primary focus is on blockchain-based gaming. Its gaming platform is 100% owned by its community. The development team is keen on building a user-friendly system for everyone.

The facets that make up the UFO ecosystem consist of the following.

A core component of UFO’s operations is its immersive, imaginary planet known as the Dark Metaverse. In this metaverse-themed, infinite ecosystem, you’ll find play-to-earn (P2E) games with breedable in-game NFTs, virtual land and a metaverse launchpad. 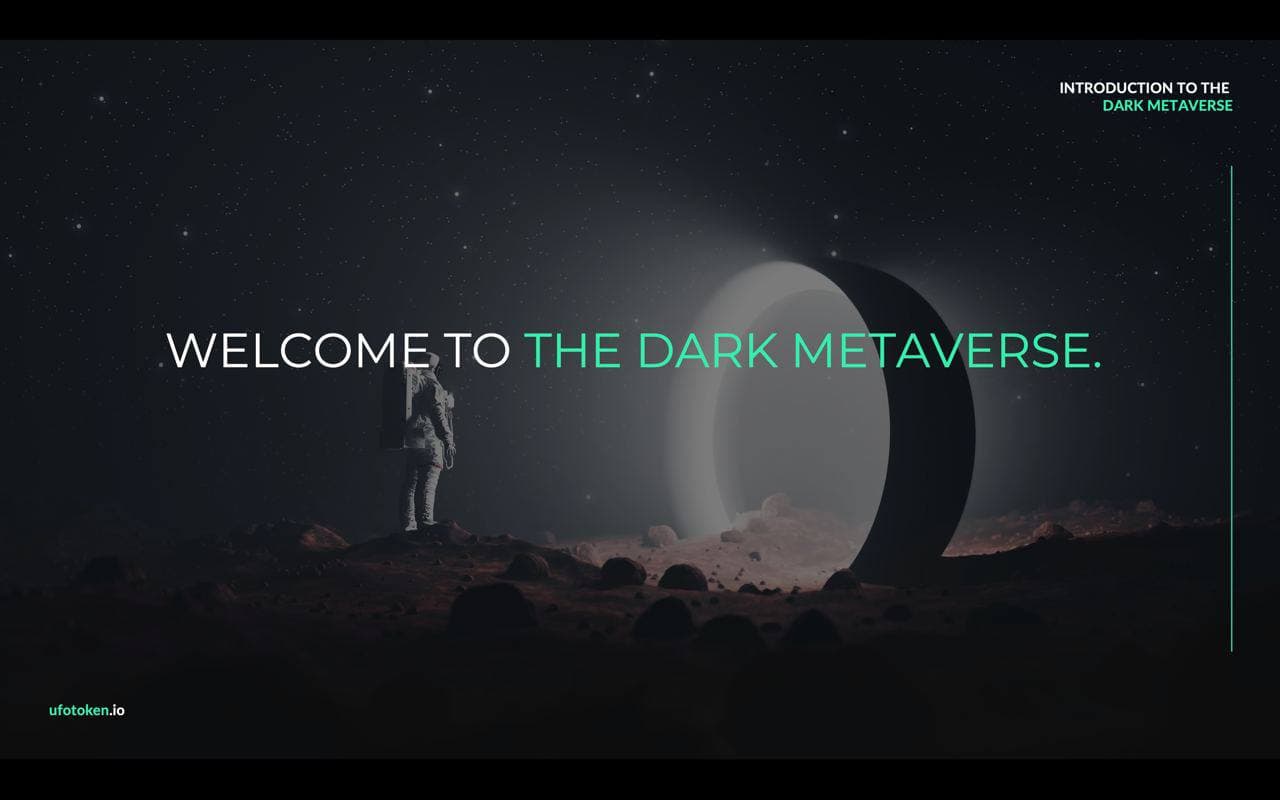 Dark Metaverse is chain-agnostic, meaning that the games on its platform aren’t confined to Ethereum’s network; they can be built on other blockchains as well. The Dark Metaverse also operates using sub-economies that consist of virtual areas which you can own. Virtual land on the Dark Metaverse is in the form of ERC-721 tokens (NFTs), which can be minted or purchased using UFO tokens.

The largest landowners in the Dark Metaverse are known as "Eternals." They’re considered to be profitable for the entire metaverse, and they have influential DAO rights.

New planets will continuously be added to this metaverse, which will signify a new game is following right behind. Once you inhabit a planet on the Dark Metaverse, you’ll have access to new game launch sales and grow your revenue as the game rolls out.

The Dark Metaverse will also feature an NFT marketplace, and collaborate with Kadena and Kaddex to launch an in-house, cross-chain DEX. Once the DEX is launched, there will be more ways to monetize UFO Gaming assets through cross-chain swaps, staking and NFT staking.

The first game to launch on UFO Gaming’s Dark Metaverse is Super Galactic. Similar to Axie Infinity, Super Galactic is an arcade action game (ARG). You can breed digital soldiers (in the form of NFTs), and use them in battles to earn rewards.

Super Galactic is built on the Ethereum blockchain and integrated on Polygon, which ensures minimal gas fees. It has a next-level gaming interface with finite in-house NFTs known as UFOeps. They’re the playable characters needed to participate in Super Galactic. 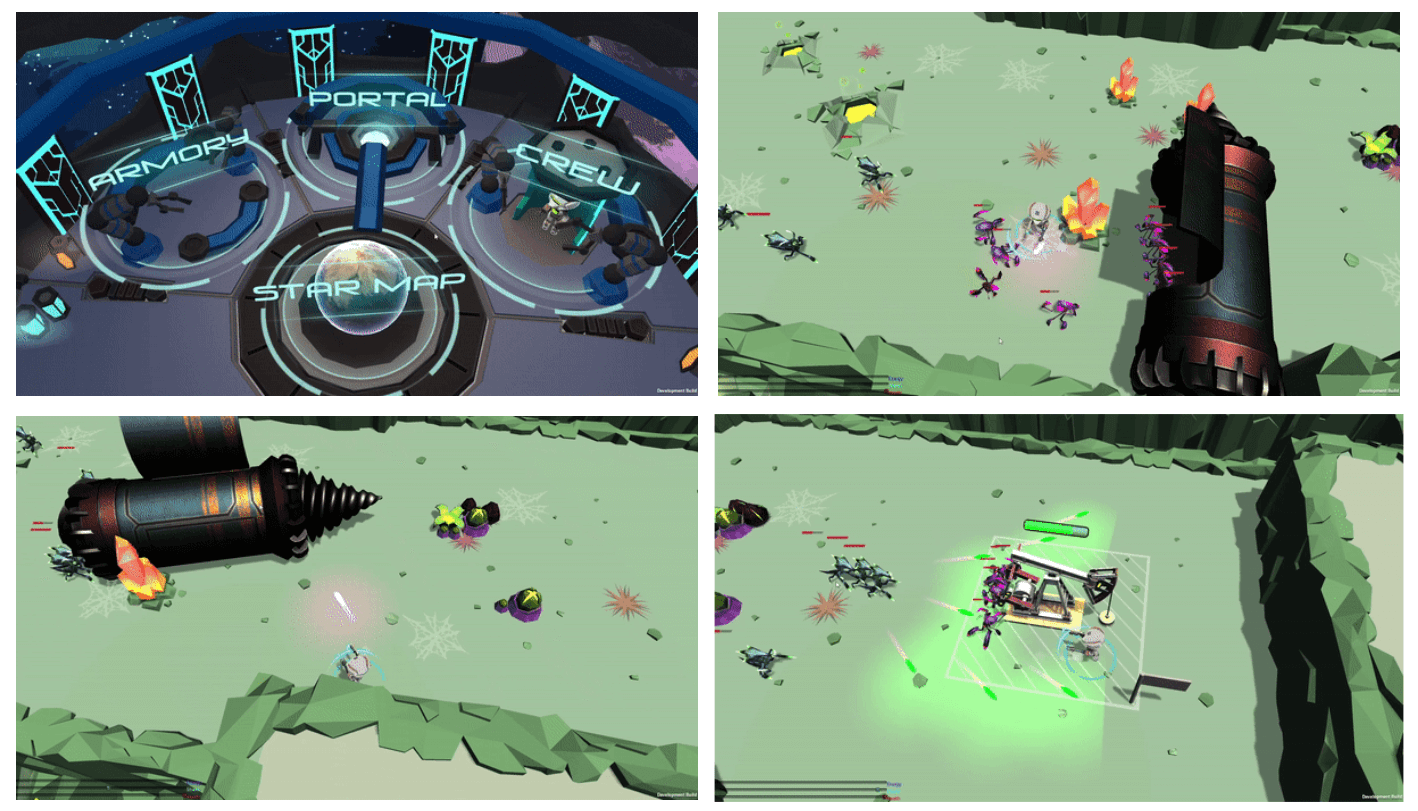 Super Galactic uses a three-token system consisting of UFO, Plasma Points and UAP tokens. To start playing the game, you’ll need to stake UFO on The Cosmos (their staking DApp).

With your staked tokens you’ll earn Plasma Points, which you can use to buy the UFOeps needed to play the game.

You can also breed your own soldiers, which requires UAP tokens. These tokens are obtained by participating in daily quests and completing missions. While UFO and UAP tokens are tradable, Plasma Points are only for minting UFOep NFTs.

The project has partnered with established streamers to host tournaments with enticing prize pools. For example, UFO Gaming held an Apex Legend tournament in which gamers competed for a $10K prize. Furthermore, UFO Gaming has collaborated with Horizon to acquire the Top Dogs eSports team. 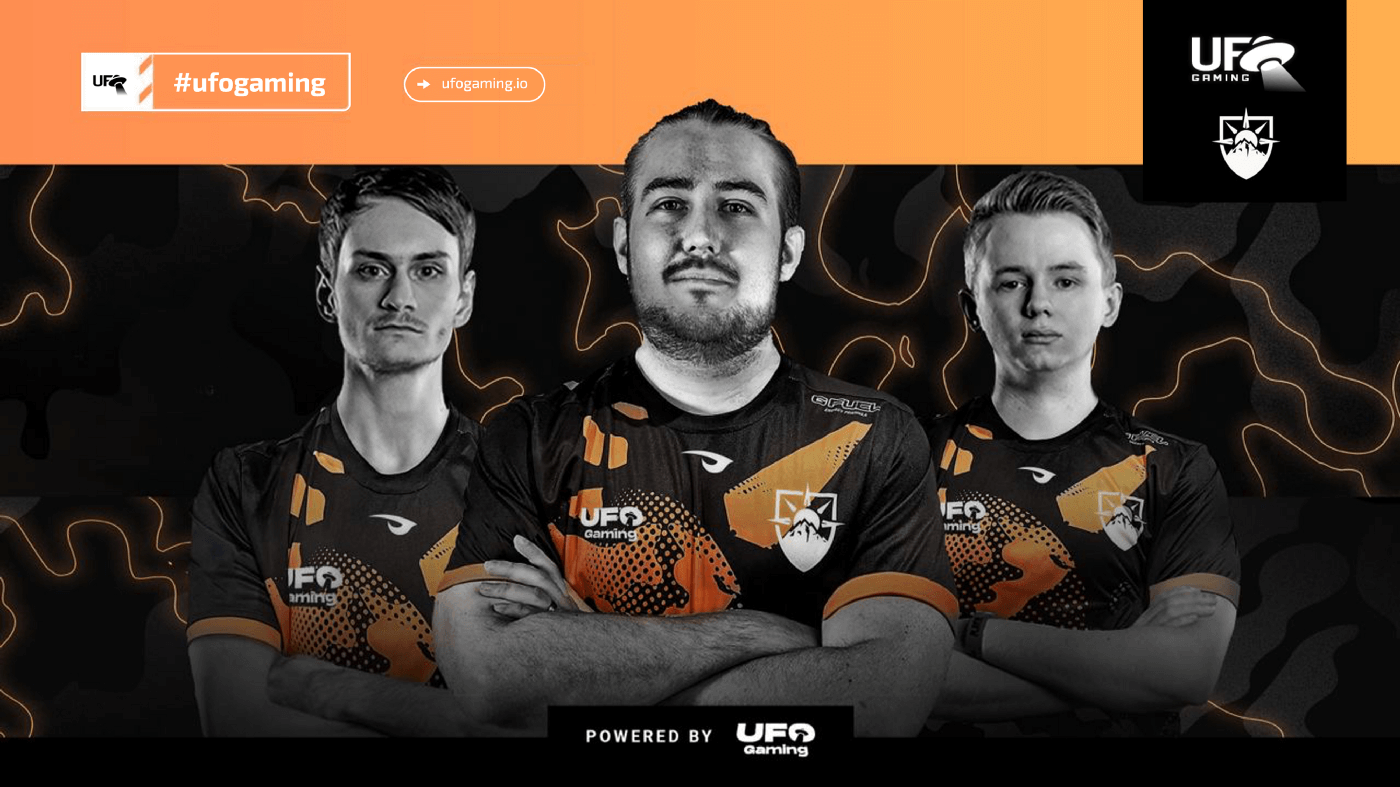 UFO Gaming is community-governed and operates as a decentralized autonomous organization (DAO). To vote on proposals, you need to hold UFO tokens which give you an equal right on the success of the project.

UFO is based on the ERC-20 standard, and acts as the primary token of the UFO Gaming platform. It’s used for staking to generate Plasma Points, with which you can purchase playable characters for gaming.

UFO tokens are also used to provide liquidity on Uniswap by locking them in the UFO-ETH liquidity pool, where you’ll receive a share of the fees generated.

UFO Gaming has launched a staking DApp, The Cosmos, that lets you stake UFO or UFO-ETH LP tokens to earn Plasma Points and extra UFO tokens using a dual-reward system. All UFO rewards have a vesting period of 12 months (meaning you can only claim them after one year).

When staking, you can choose to single-stake UFO tokens, which earn you 25% of the pool, or LP stake UFO-ETH LP tokens which attract 75% of the Plasma Points pool.

In addition, you can opt for locked or flexible staking. Flexible staking allows you to remove your tokens at any time. On the hand, locked tokens are staked for 1–52 weeks and attract more rewards. The longer the tokens are locked, the higher the rewards.

Note that while the tokens are Ethereum-based, the staking is done on the Polygon Network. This means that you need to bridge your tokens from Ethereum to Polygon before you can start staking. 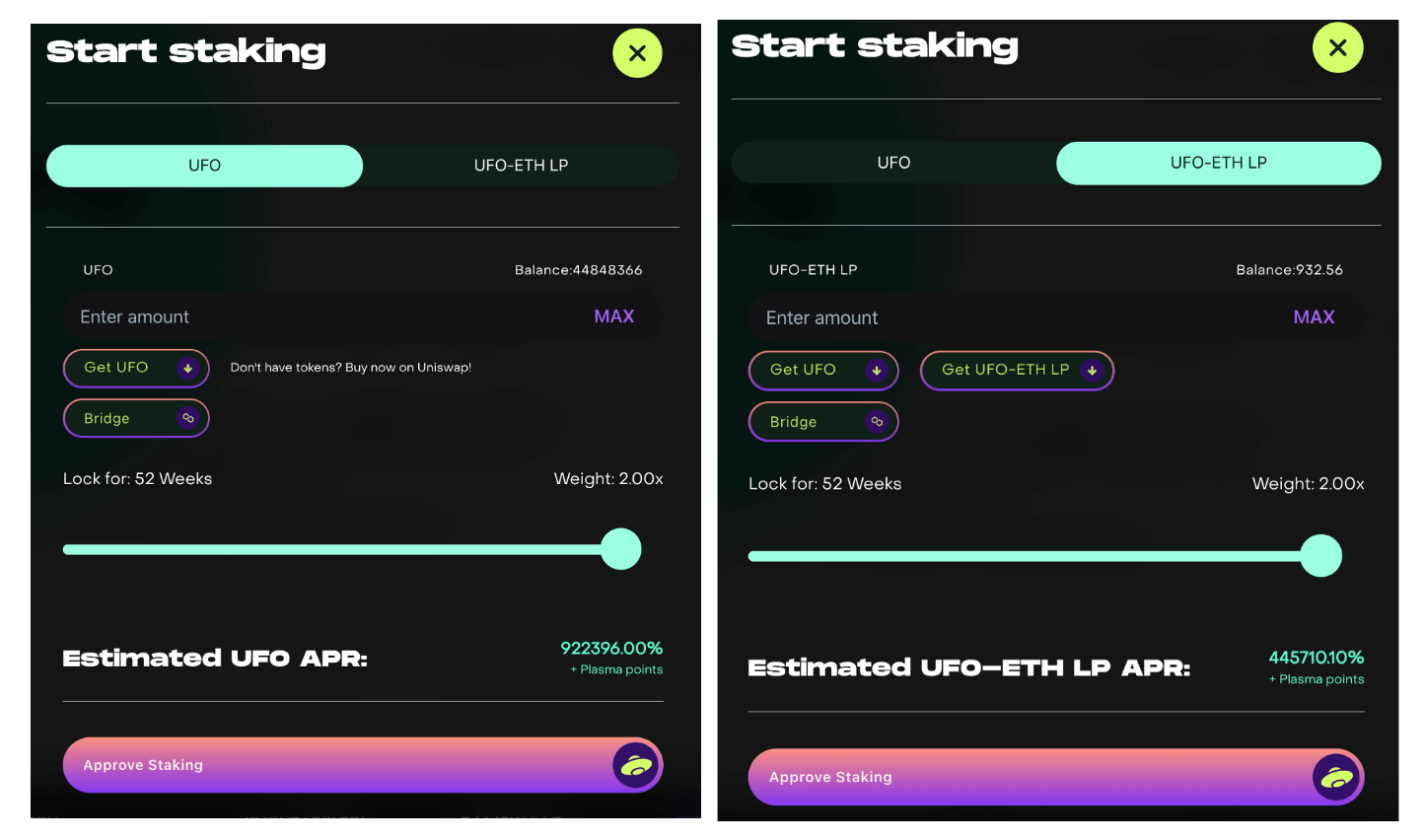 Since the launch of The Cosmos, UFO Gaming’s staking DApp, UFO rewards for stakers will be emitted over a period of 12 months. However, the distribution won’t have an inflationary effect, since all of the remaining UFO tokens are already in circulation. The tokens for rewarding stakers have been provided by the project partners and team.

GameFi crypto projects such as The Sandbox (SAND) and Decentraland (MANA) have disrupted traditional gaming. The futuristic concept of a metaverse has been received positively, especially by the gaming world, and is expected to grow significantly in the next few years.

That said, UFO Gaming has been built by a team of gaming lovers, each of whom has been in the crypto industry for over six years. Its combination of community ownership and a metaverse realm that has NFTs, virtual land, a launchpad and highly-accessible games makes UFO Gaming a strong project.

Upon launch in July 2021, the UFO price was relatively static However, the price started to rise steadily in the months that followed, reaching its highest price of $0.00005569 at the end of November 2021 during the crypto bull run.

After that, the price began to decline steadily, finding support around the $0.000002 range. The UFO price has been trading sideways since March 2022, though it experienced a slight price spike in August 2022. 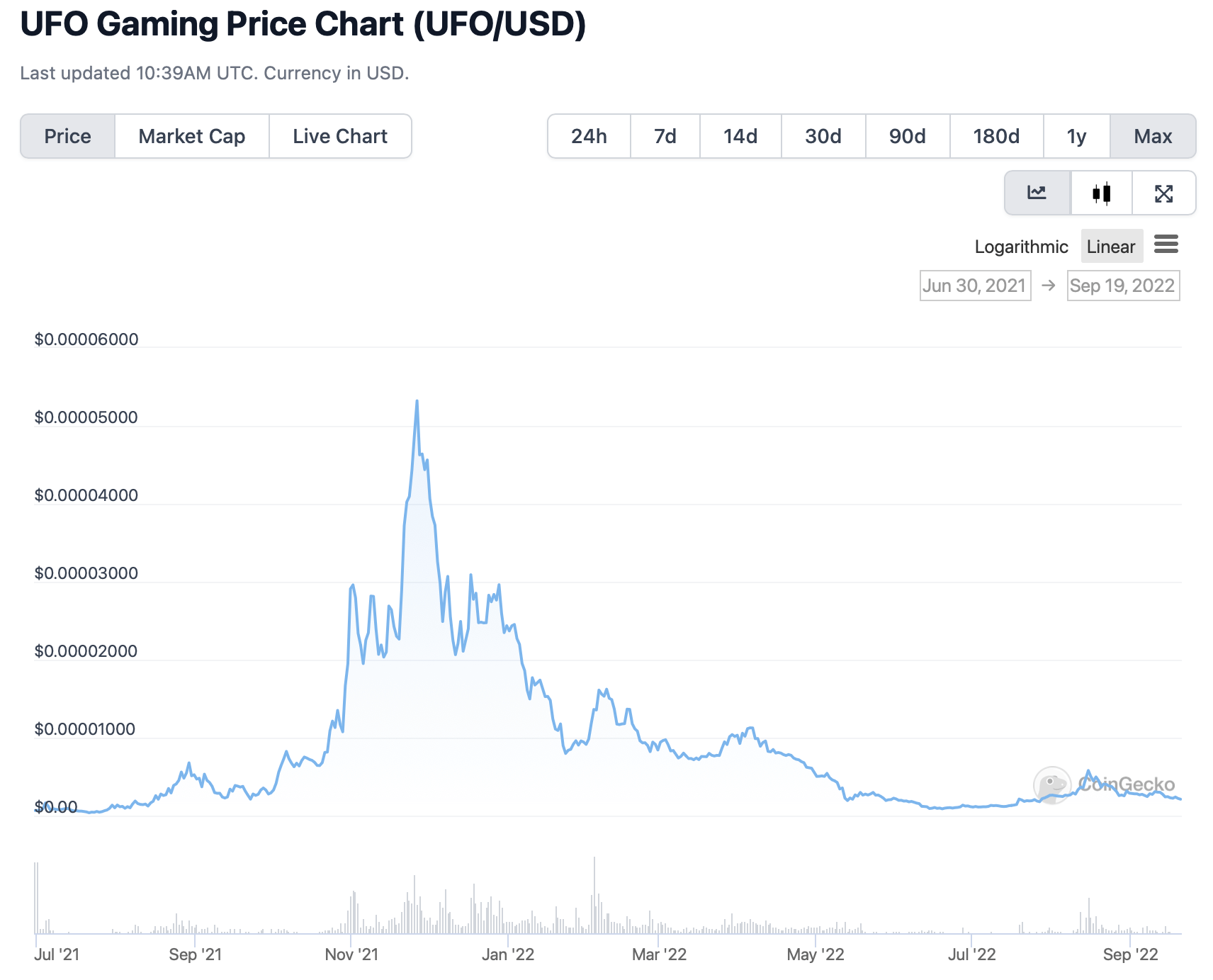 Experts have mixed sentiments about the future price of UFO tokens. WalletInvestor is bearish, forecasting a sharp decline to approximately $0.0000001 by mid 2025.

However, let’s look at the UFO price prediction from a cautiously optimistic angle. UFO has been categorized as a metaverse token. Unlike most of the tokens in this category, UFO may be the only one still below $1.

Considering that the UFO token is still a low market-cap coin, there’s room for a significant price increase. Therefore, UFO’s price is one to watch as the project launches new games and opens up its network for developers to integrate their games on the platform.

Remember, cryptocurrency prices are prone to extreme volatility. Always do your own research and your due diligence before investing in any token.

The team at UFO Gaming is on an ambitious mission to create a gaming platform that’s built for the real world. By leveraging blockchain technology, the project continues to open up the infinite possibilities of the metaverse to gaming enthusiasts.

Based on the superior architecture of the Super Galactic game, UFO Gaming’s Dark Metaverse seems to have caught the gaming community’s attention. As more games launch on its platform and the team continues to make a mark on the eSports industry, UFO Gaming could be another metaverse project headed for a breakout.