Alien Worlds — Play to Earn in an Alien Landscape

Living in space has always fascinated humans — look at the rate at which top billionaires are racing to tour the outer galaxies! While most ordinary people don’t have the gazillions needed to tour space, their dreams of exploring Mars and other galactic bodies can be achieved virtually. With crypto game-changing concepts such as the metaverse and web3, blockchain technology has opened a whole new world of owning a piece of space.

At the heart of virtual space exploration through gaming is Alien Worlds, an NFT metaverse game where players compete and connect in a simulated economy. Alien Worlds is powered by Trilium, a cross-chain fungible token that runs on Ethereum, Binance Smart Chain and WAX blockchain.

Let’s go on an exploration mission of the Alien Worlds crypto and discover any treasures hidden in its metaverse.

What Is Alien Worlds?

Alien Worlds is an extensible, decentralized play-to-earn metaverse where users participate in intergalactic exploration missions. Gamers are incentivized to use Trilium tokens (TLM), the platform's in-game currency, which they collect during their planetary quests.

The game is structured into planets that operate a decentralized autonomous organization (DAO) governance model. These planetary DAOs have a treasury which receives a given amount of the native token TLM daily, used for payouts to its members.

As a play-to-earn NFT game, Alien Worlds features a wide variety of NFTs which are up for grabs by explorers. These collectibles are used for mining, owning or renting out land, fighting, gaming or spacecraft missions. The more Trilium a player garners, the higher the power to own NFTs and increase the explorer’s authority in the game.

Ethereum’s use case in the game includes storage and accessing TLM using the chain’s smart contracts. As a fast and consumer-centric blockchain, BSC allows for low-cost transactions on Alien Worlds. The third blockchain on Alien Worlds is WAX, which is an NFT-focused ecosystem that’s home to popular NFT games such as Farmers World and Wombat Dungeon Master. 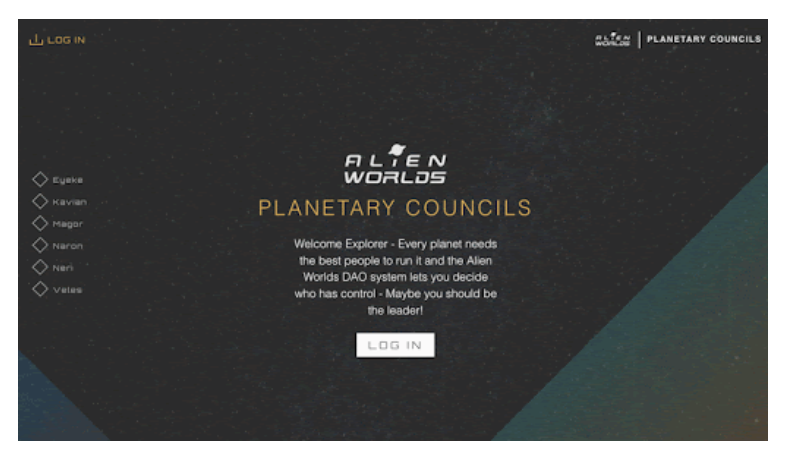 Every exploratory activity on Alien Worlds revolves around planets. At its inception, the game had six planets: Eyeke, Veles, Magor, Kavian, Naron and Neri. However, the network allows users to create their own planets, complete with NFTs and games.

Each planet runs as a planetary decentralized autonomous organization (planet DAO) with a dedicated planet portal for TLM holders. Each planet DAO has a planetary treasury and a council that manages the affairs of the planet. Weekly elections are held to vote for council candidates to run the planet DAO.

Similar to The Sandbox play-to-earn game, Land ownership is a critical element of Alien Worlds. Landowners can earn a 20% commission in Trilium from miners excavating their land.

Alien Worlds’ gameplay revolves around mining quests and fighting games, where the reward is TLM or NFTs. Everything on its metaverse has been tokenized to ensure fair play, from the Avatars to the Weapons, Minions and Tools.

By entering a wormhole, a gamer is flung into an amazing extraterrestrial world packed with loads of habitable planets. Once in, a user is equipped with a free shovel from the Tools NFTs to help start the mission. Your time mining is spent between actual excavating and recharge time. The secret to a more lucrative mining game is identifying Land that’s a gem, with a large TLM reward pool.

No mining quest is complete without proper tools. The trick when selecting tools is picking one with high mining power but low cool-down time. As a novice, you’ll quickly mine Abundant and Common rarities, which will fetch you a decent amount on AtomicHub. However, with advanced mining skills, you’ll obtain Epic or Legendary rarities. On rare occasions, you’ll mine the scarcest rarity, Mythical — pure gold!

Fancy some metaverse space battle? Then the Thunderdome Battle is a must! Using the Weapons, Avatars and Minions NFTs, you can battle it out against other users. Styled after Hunger Games, many minions enter the battlefield — but only one can emerge victorious. The game mechanics of Thunderdome make the strongest minion a target for the other weaker ones. Top minions receive rewards and NFT drops.

What Are TLM Tokens?

Trilium (TLM ) is the in-game currency of Alien Worlds. As the utility token, TLM’s role is to ensure that Alien Worlds' economy is functioning.

TLM is used for planetary governance, staking for rewards, purchase of in-game items, gameplay incentives and acquiring NFTs. In short, TLM is the blood that fuels the Alien Worlds universe.

TLM is a cross-chain token that exists on Ethereum (ERC-20), Binance Smart Chain (BEP-20), and WAX. You can easily teleport your TLM between each blockchain through the use of MetaMask.

Both players and planets on Alien Worlds are hunting for TLM. You can accumulate more TLM through mining or going on an exploratory mission. And as a land owner, you can even earn passive income from miners excavating your land! Each planet is allocated a given amount of TLM daily, depending on the number of landowners.

You can stake TLM in a given planet to increase the planet’s reward pool. Staking rewards are awarded in TLM and NFTs which can help in quests or battles.

Also, holding TLM earns users voting rights in the planet DAO governance. A gamer can participate in weekly elections — and even submit their candidacy to join the governing council.

Bullish on Alien Worlds? Trade TLM as a derivative in Bybit now!

To ensure scarcity, there’s a total supply of 5 billion TLM tokens, with a circulating supply of 2.61 billion. The total supply is programmed to decline each year using a complex algorithmic mechanism.

To counter hyperinflation, Alien Worlds has factored in inflation at different percentages over several years, with the circulating supply declining yearly.

The distribution and allocation of TLM are as shown below:

According to the Alien Worlds technical blueprint, TLM coins use advanced token mechanics to reconcile cross-chain movements across the three chains. The mechanism ensures a max supply of 10 billion TLM. Using oracles (off-chain accounts used for sourcing the truth), the system can easily communicate and reconcile TLM movement across chains.

NFTs are the backbone of Alien Worlds. At its inception, the game floated about 300 NFTs in six different categories, which could be traded for a profit or to conquer missions during quests. Digital collectibles on Alien Worlds have two distinct features: Rarity and Shininess.

As mentioned earlier, Rarity on Alien Worlds is divided into six levels. The rarer an NFT, the greater its power when mining or fighting. On the other hand, Shininess provides gamers with better stats — and looks cooler. All NFTs in Alien Worlds can be shined except for Land.

The genesis NFTs on Alien Worlds are:

Land is a series of NFT game cards that represent real estate ownership on Alien Worlds planets. With Land, you can mine on it to receive TLM or rent it out for a commission to explorers. At inception, planets were allocated finite pieces of Land, with any unsold Land remaining with the Federation.

Fancy being a metaverse landlord? Alien Worlds presents you with 20 different types of land, each with varying attributes.

To build your NFT haul on Alien Worlds, you need Tools that help you carry out different tasks. Each Tool has four different stats that dictate the amount of TLM you can mine, your chance to receive an NFT, and the cool-down time before you can mine again.

Minions (no relation to the Minions movie) are the NFTs used in Alien Worlds fighting games. Minion NFTs can attack, defend and race. You can boost the power of the Minions using Weapon NFTs. At its start, Alien Worlds released 12 Minions, and more are expected as the game expands its battlefield framework. 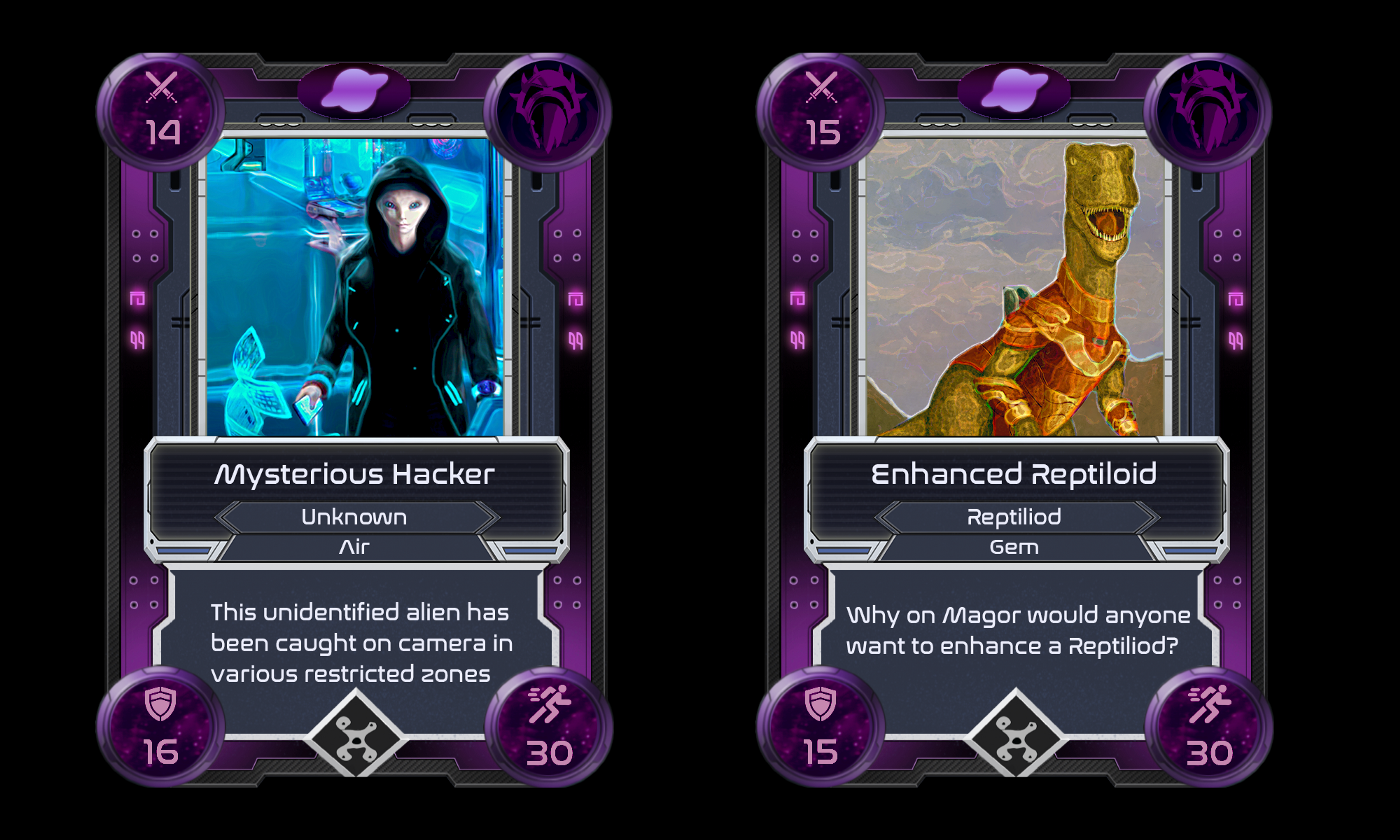 To battle it out with other explorers in the Thunderdome fighting game, you’ll need the Weapon NFTs. Whether you opt for the Waxon Fire Sword to attack, or the Waxon Shield to defend yourself, having a Weapon NFT will prove useful in your quests.

Your selection of Avatars gives you an identity. While these NFTs don’t affect your gameplay, they are your face in the metaverse.

Missions are fun on Alien Worlds. They give you the thrill of exploring the game’s metaverse in leased spacecraft. During these missions, gamers are rewarded using TLM or Mission NFTs that can be traded for a profit.

How to Buy the Alien Worlds Crypto Token

TLM, the native token for Alien Worlds, is available as a derivative contract on leading cryptocurrency exchanges including Bybit. Unlike spot trading, derivatives trading allows investors to speculate on an asset’s future price, rather than its current one. On Bybit’s user-friendly derivatives trading market, you can leverage Trilium TLM and other altcoins as USDT trading pairs. 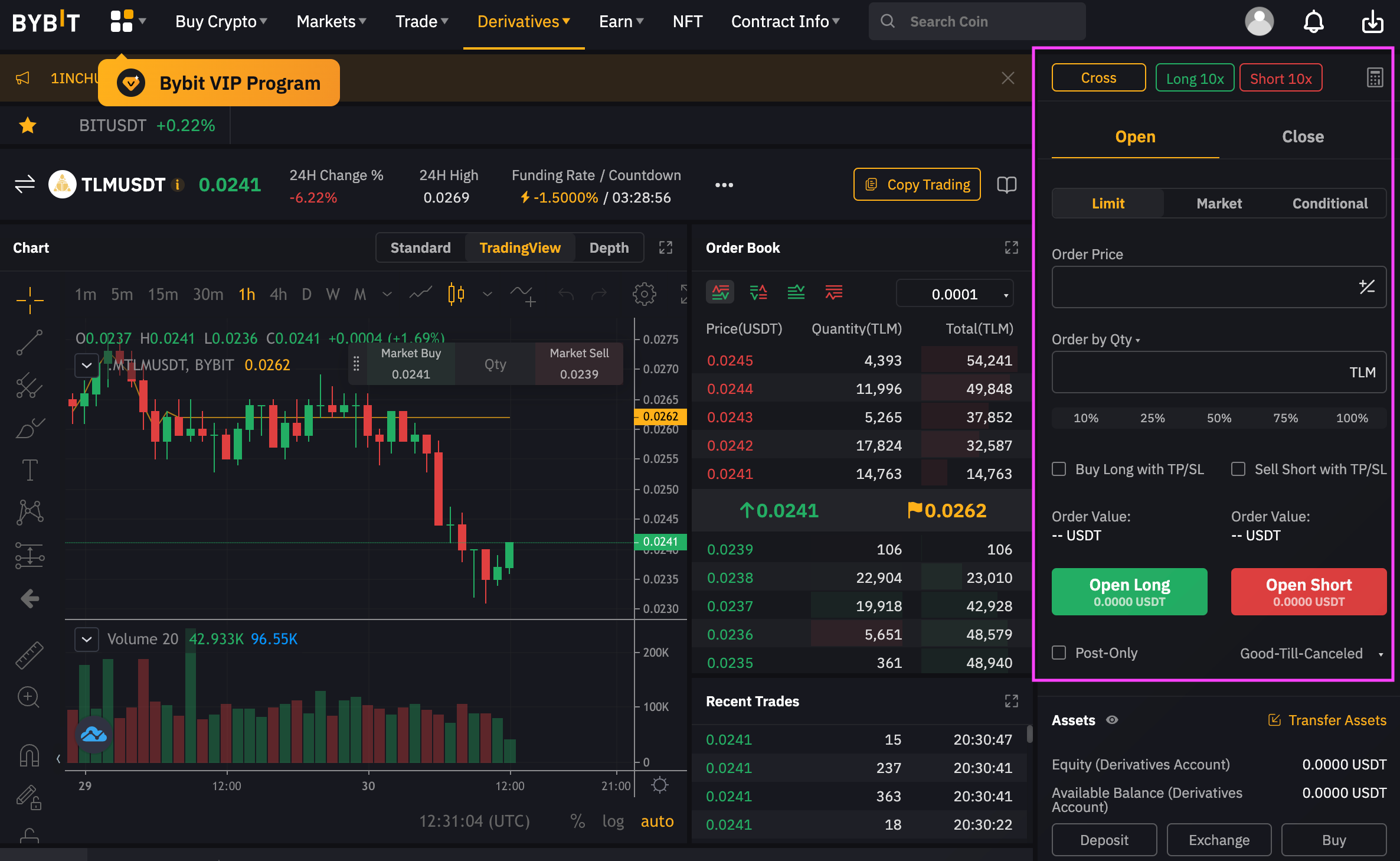 As with all USDT perpetual contracts on Bybit, the TLMUSDT contract is settled in USDT, with each contract worth 1 TLM and funded every 8 hours.

The following are the five quick and easy steps for trading the TLMUSDT perpetual contract on Bybit.

To start, you need to create an account with Bybit. Opening a Bybit account is fast, easy and free. To do so, go to Bybit’s official website and click on Sign Up. Proceed to enter your preferred email address and phone number.

A strong email password will also need to be created. You’ll be required to complete the quick verification process to capture your KYC details. Once done, you can start trading.

You’ll need to feed your account with USDT to begin trading. To fund your account, you can use Bybit’s Fiat deposit page. Once purchased, click on Assets in the right-hand corner of the platform and deposit your USDT to Derivatives.

Select Derivatives on the website’s navigation tabs. From the drop-down menu, click on USDT Perpetual → TLMUSDT. You will be directed to the trading terminal. To order, use the order box on the right (the green button for “buy” and the red button for “sell”).

Bybit has three types of orders: Limit, Market and Conditional. While the limit order takes longer to fill than the market order, it’s much cheaper. Proceed to enter the minimum amount of TLM you wish to transact.

(Pro Tip: Leveraged trading is highly risky. Please read and understand the risks associated with margin trading before proceeding with any trade.)

Monitor your trading using the Order Status section at the bottom of the trading terminal. To opt out, click on the Close Position tab and enter your Limit amount to close the trade.

Alien Worlds may currently be the most popular play-to-earn game around, with its players growing by the thousands each day — but it still shows its continuing determination to improve and attract even more players. The Alien Worlds team is constantly working to improve the game's ecosystem, with more exciting features and game extensions yet to be revealed. As the DeFi gaming space gains further traction, it wouldn’t come as a surprise if the TLM token price skyrockets.