Tornado Cash: How It’s Stirring Up a Storm in the Crypto World

Numerous crypto projects have become popular before meeting some form of controversy. A large number of them provide investors with a unique “hook” or feature that grabs their attention. In the case of Tornado Cash, this feature involves transaction anonymity by acting as a crypto mixer. Despite its advantages, the popular cryptocurrency mixing service Tornado Cash has already stirred up a storm in the crypto world, the details of which are discussed further in this article.

What Is Tornado Cash?

Whenever a user intends to make a deposit with ERC-20 tokens or ETH into the Tornado Cash protocol’s liquidity pools, the protocol first generates a secret hash before admitting both the deposit and the hash. When the individual intends to withdraw their crypto, they simply input the secret hash to prove their ownership over the funds. Since the funds go through the protocol’s liquidity pools first, it becomes impossible to link the deposit to the withdrawal. This provides total asset privacy.

Currently, Tornado Cash is owned in full by its community, to whom ownership was transferred in 2020 when the Tornado Cash team relinquished its control. Since then, Tornado Cash has been a fully decentralized protocol.

What Is a Cryptocurrency Mixer?

A cryptocurrency mixer is a software tool that improves anonymity for some crypto transactions. Once crypto is deposited from one address, it’s mixed with crypto from other transactions and withdrawn from a different address.

The crypto assets must be deposited with a smart contract designed specifically to perform this mixing transaction. Once a set amount of time has passed, users can withdraw their deposited tokens from another address. Every mixer comes with its own distinct mixing process. Various cryptographic techniques (which differ with each protocol) can be used to confirm or verify crypto deposits.

Who Is Behind Tornado Cash?

Semenov specialized in quantum statistics and field theory. Prior to co-founding PepperSec, he co-founded RedHelper and assisted with optimizing eCommerce conversions and funnels. Semenov and Storm used the open-source code from Zcash to create Tornado Cash. Even though Zcash operates as a privacy coin, Tornado Cash offers more uses by acting as a coin-agnostic mixer service. It's because of this unique value proposition that Tornado Cash quickly became popular after its introduction to the crypto industry in 2019.

How Does Tornado Cash Work?

Tornado Cash mixes its transactions with zero-knowledge proofs, which are able to obfuscate all transaction information. Hence, Tornado Cash is considered to be a decentralized service that's operated with the use of smart contracts. This means that centralized parties can't obtain funds from the mixing process.

When a user deposits their funds into Tornado Cash, the protocol generates a completely random hash before the deposit of ERC-20 tokens goes through. In order for the user to withdraw their funds from a different address, they’re required to submit the valid key. Withdrawals can be made with MetaMask or other crypto wallets.

One of the two core components behind Tornado Cash involves zero-knowledge proofs. These are digital protocols which improve privacy by facilitating data sharing between separate parties without providing info about the transactions, which could include passwords.

Since this type of information isn't provided to another party, zero-knowledge proofs greatly improve security and reduce congestion by obviating the need to store information on Layer 1.

Anonymity mining is designed to provide any Tornado Cash user who supports TORN's privacy features with liquidity. Users can obtain cash via a liquidity mining system, which has two stages to ensure user privacy is always maintained. When a user interacts with the Tornado Cash protocol, they receive a certain number of points, which are deposited directly into a shielded account. These can then be converted into TORN tokens, which have a fixed supply.

The Calm Before the Storm

While Tornado Cash proved to be popular almost immediately after it was launched in 2019, the project itself has since experienced numerous issues, the primary one of which occurred in early August 2022 when sanctions were implemented by the U.S. Treasury. However, the cause for these sanctions began at an earlier date. In March 2022, Roman Semenov stated to Bloomberg News that enforcing sanctions on decentralized protocols would technically be impossible.

Despite this claim, sanctions were set by the U.S. Treasury Department's Office of Foreign Asset Control on August 8, 2022. The reason was Tornado Cash’s ability to grant transactions anonymity as a coin mixer. Coin mixers have regularly been suspected as being a perfect solution for laundering funds.

While money laundering is possible with this service, it's also difficult to prove that it occurs. Craig S. Wright, an Australian computer scientist and businessman who claims he was part of the main team that created Bitcoin, believes that mixing standard transactions with potentially criminal activities ensures that every transaction within a crypto pool is effectively contaminated. Since its inception, the team at Tornado Cash has stated it will impose effective controls designed to limit or stop funds from being laundered by malicious cyber actors.

Despite these promises, the U.S. Treasury Department stated that Tornado Cash never took the necessary steps to prevent illicit activity, such as fraud and ransomware schemes. It believes that currency mixers such as Tornado Cash pose a threat to national security — which is partially due to Tornado Cash allegedly being used in various crypto heists over the past year. For instance, in March 2022, $615 million worth of tokens was stolen from Ronin. Another attack occurred on a start-up known as Harmony, which resulted in the loss of $100 million.

Before August’s sanctions, the TORN token was worth a little more than $30. At the moment, it's worth almost $9, with a market cap of over $9.63 million. TORN’s fully diluted market cap is approximately $87.6 million, with just under 1.1 million TORN tokens currently in circulation. The token’s maximum supply is locked at 10 million.

Use Cases of Tornado Cash

The Tornado Cash platform is mainly used by crypto investors and holders who want to perform completely anonymous transactions. Users can also access TORN tokens to make governance proposals, or vote for changes in the protocol. When users obtain enough anonymity points through Tornado Cash, they can convert these points into TORN tokens.

The Crash of Tornado Cash

Caught in the Eye of the Storm

The authorities believe that the developer they arrested, Alexey Pertsev, was involved in money laundering and keeping criminal financial flows hidden by effectively mixing cryptocurrencies.

The Dutch Fiscal Information and Investigation Service has since stated that more arrests are possible in the coming weeks. At the moment, it's unclear if Pertsev was engaged in criminal activity, or was simply involved with writing code for the Tornado Cash protocol.

The Treasury Department stated that Tornado Cash has been used for the laundering of $7 billion in virtual currency since 2019, which includes a theft of $455 million by what's known as the Lazarus Group, a North-Korean cybercrime group made up of anonymous individuals from North Korea. As mentioned previously, these sanctions were made after the TORN team allegedly failed to eliminate these issues from its platform.

How Does This Affect Crypto Users?

As a result of these sanctions, any property or crypto assets related to Tornado Cash that a U.S. citizen or entity is in possession of must be reported directly to the Treasury Department. Moreover, any transaction involving these assets is prohibited in the U.S.

All funds that leave Tornado Cash are associated with the imposed sanctions, which means that any cryptocurrency exchanges or businesses that come into contact with these crypto assets will be notified that the assets are tainted. Crypto assets that were mixed through the Tornado Cash platform before the sanctions took place aren't of interest to the Treasury Department, and can be freely withdrawn.

What This Means for Other Virtual Currency Mixers

The Treasury Department has made it clear that they want to resolve the money laundering issues which they believe are inherent to crypto mixers. Accordingly, other crypto mixers aren't necessarily safe from future sanctions.

Note, however, that according to Under Secretary of the Treasury for Terrorism and Financial Intelligence Brian E. Nelson, the Treasury Department had reportedly asked Tornado Cash several times to improve their platform and reduce the possibility of criminal activities, to which they repeatedly failed to do so. Therefore, it could be years before other crypto mixers are sanctioned as well.

For innocent users, the sanctions can be particularly frustrating. Moreover, if you've conducted crypto transactions after a certain date, you could be blocked entirely from withdrawing your Tornado Cash assets. Because these events are so recent, it's difficult to predict what's going to happen next.

Some notable figures find these sanctions troubling, and are inquiring with the Treasury Department as to why they were made. For instance, U.S. Congressman Tom Emmer tweeted on his official Twitter page that he sent a letter to the Department on August 23, asking why Tornado Cash had been sanctioned. He believes that these sanctions diverge from precedent, and that the issues are tied to open-source software, as opposed to specific entities or people. A response to his letter has not yet been received. 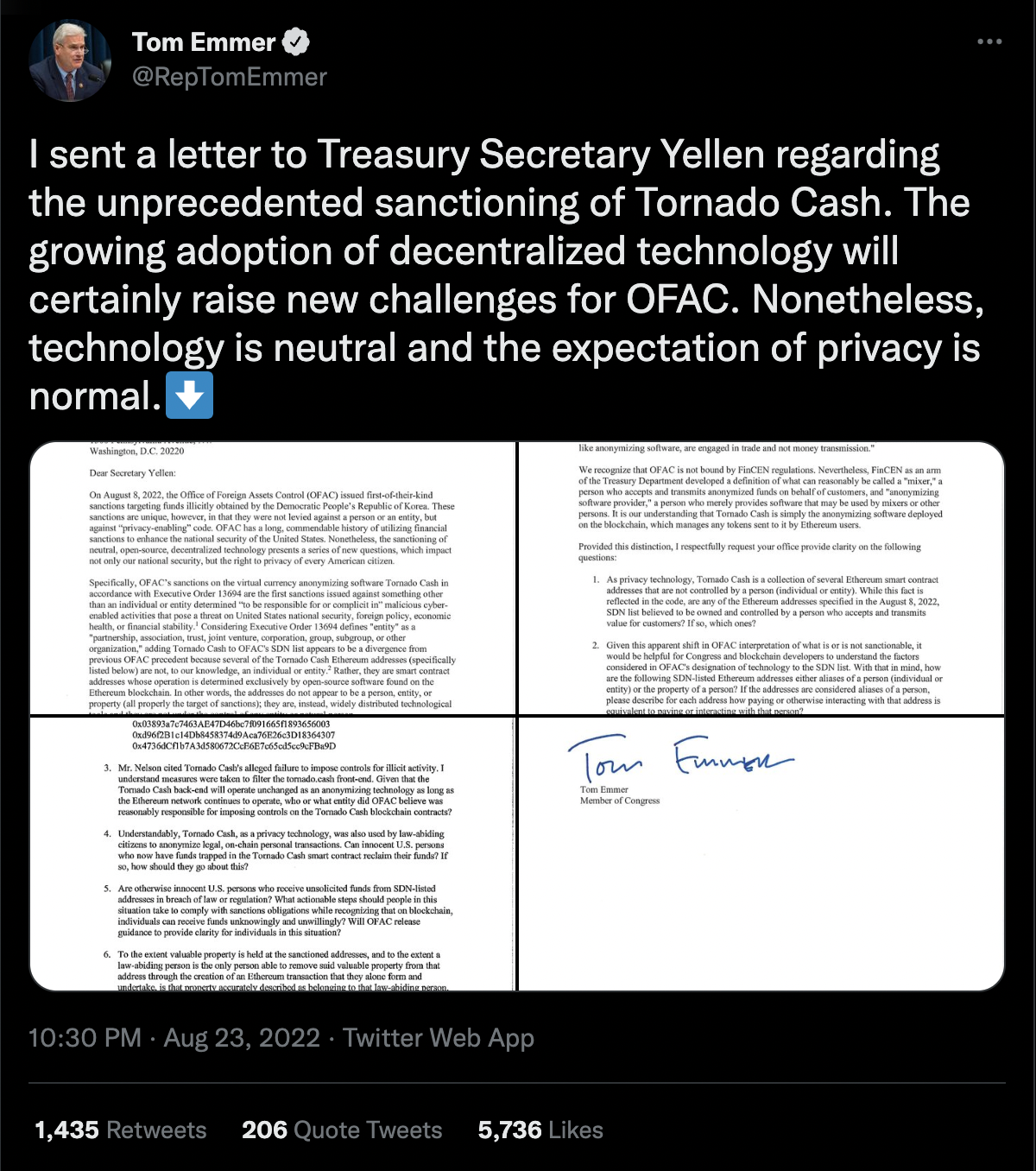 Tornado Cash is a crypto platform that has proven to be highly popular among investors and crypto holders who want more anonymity with their transactions. However, because the platform’s decentralized nature and crypto-mixing capability can allegedly enable money laundering, the U.S. Treasury Department recently sanctioned Tornado Cash. While these sanctions won't necessarily be in place forever, Tornado Cash’s trajectory will likely remain unclear for the foreseeable future.