What Is ShibaSwap? — and How to Use It

Ever since Dogecoin grabbed the attention of investors and mainstream crypto enthusiasts around the world in 2013, similar projects have started popping up left and right, trying to replicate the success of DOGE. In the sea of dog-themed cryptocurrencies inspired by Dogecoin, the Shiba Inu token (SHIB) has emerged as the standard-bearer.

But despite having a similar mascot, Shiba Inu bears little resemblance to its predecessor. What began as a lighthearted blockchain trial run has now turned into a serious project bent on establishing a multifaceted ecosystem. People behind Shiba Inu are now working on ShibaSwap – a user-friendly platform for trading cryptocurrencies in a decentralized manner.

Let's find out more about the ShibaSwap platform, its native tokens, and whether the platform is worth your attention.

So what is ShibaSwap? ShibaSwap is a native decentralized exchange (DEX) of the Shiba Inu coin. The Shiba Inu team has been working on this project since early 2021, highlighting Shiba Inu's ambitions to become more than just a meme altcoin.

ShibaSwap is designed to be as easy to use as possible, while still offering a wide range of features that would satisfy even the most demanding traders. Just like PancakeSwap and Uniswap, ShibaSwap operates without a single or central authority.

However, ShibaSwap may have a greater profit potential than PancakeSwap and UniSwap. After all, it not only has one, but four reward features! These functions allow ShibaSwap users to earn token rewards which can provide a good stream of passive income.

Let's take a look at SHIB, LEASH and BONE in more detail.

SHIB is the heart of the exchange. It was created in August 2020 by a founder using the name Ryoshi. The mascot of SHIB is a Shiba Inu, the same breed as Dogecoin's mascot. SHIB runs on the Ethereum blockchain, offering maximum safety and functionality to its users.

Despite its price, the value of Shiba Inu coins is hovering around $26 billion, due to the approximately 549 billion coins in circulation. In the beginning, SHIB had nearly 1 quadrillion authorized coins. However, around 40% of these coins were burned in May 2021 by Ethereum co-founder Vitalik Buterin.

BONE serves as the governance token for the entire ShibaSwap ecosystem. It allows the lodgers to propose and have a say in changes to the ShibaSwap protocol through the Shiba Inu Doggy DAO. In theory, the more BONE coins a holder has, the more weight their vote has on future decisions.

Doge Killer (LEASH) is the incentivized token in the ecosystem. Originally, LEASH was planned as a rebase token (or “elastic token”) of DOGE. Rebase tokens are similar to stablecoins. Their supply is automatically modified through an algorithm that keeps their price pegged to other assets. However, LEASH has since been depegged from DOGE, and has been launched as an ERC20 token with a fixed supply of coins.

Unlike BONE, LEASH is pretty rare, with a total supply of just 107,647 tokens. Because of this scarcity, each LEASH coin is currently valued at $302.13 per coin. That's how the law of supply and demand affects coins — the lower the supply, the higher the price.

There are currently four ways to earn rewards in the ShibaSwap ecosystem: Dig, Woof, Bury, and Burn Portal. Here's how each of them works.

The first way to earn rewards in ShibaSwap is through its liquidity pool, called Dig. The way it works is pretty simple: Each user who locks their SHIBA tokens in the Dig pool receives free BONE tokens. The percentage of rewards depends on how many SHIB tokens you’ve got locked in the pool.

Liquidity providers are compensated with ShibaSwap Liquidity Pool tokens (SSLP). These tokens are a representation of the users' shares in the liquidity pool, which they can redeem for BONE tokens whenever they want.

The second way to earn rewards in ShibaSwap is called Woof. It’s actually a yield farm pool that allows users to exchange their BONE rewards with each other by swapping their SSLP tokens. You’ll be able to claim 33% of the rewards immediately, but the remaining 67% will be locked for the next six months.

A user can stake their SHIB, LEASH and/or BONE tokens in the Bury function to earn high-interest rates. Users will receive xSHIB, xLEASH or tBONE, according to the type of token they stake. These tokens are representative of the tokens that the users have staked. Once the user stakes a certain amount of tokens, 33% of the returns can be claimed weekly, while the remaining sum will be locked for six months.

As you probably know, "burning" tokens means permanently removing them from circulation by sending them to a wallet they can never be retrieved from. ShibaSwap has introduced a new burning mechanism that rewards their community members who burn the protocol's native SHIB token. It allows users to dispatch SHIB tokens to a dead wallet address, and in exchange, ShibaSwap sends RYOSHI tokens to them.

In addition to its reward features, the ShibaSwap platform also provides other DEX functions in addition to the token exchange feature.

As mentioned above, the ShibaSwap exchange allows users to exchange or swap tokens for other tokens. They can also exchange a single asset for multiple other assets, - depending on the value it holds.

Doggy DAO is the governance system that drives the entire ShibaSwap ecosystem. It's a decentralized autonomous organization (DAO) that gives users a stake in the Woof liquidity pool, as well as the right to vote on certain issues.

Non-fungible tokens (NFTs) are still a new concept, but they're becoming more and more popular. ShibaSwap offers its own NFTs, called Shiboshis. These NFTs will be a part of the gaming project called the Shiboshi Game. The NFT project features roughly 10,000 pieces of the Shiba Inu mascot cartoons, similar to the popular CryptoPunks. These NFTs vary in nature, rarity and value. Shiboshi holders can also customize their own Shiboshis, which adds value to the NFT as well as delivering certain unique properties in the game.

Bonefolio, or ShibaSwap Analytics, is a complete analytics page where historical staking data, trading data and ROI information can be found. The user can find burn and mint amounts here, as well as transaction fees. The function also has a portfolio tracker with which users can easily keep track of their yield rewards.

How to Use ShibaSwap 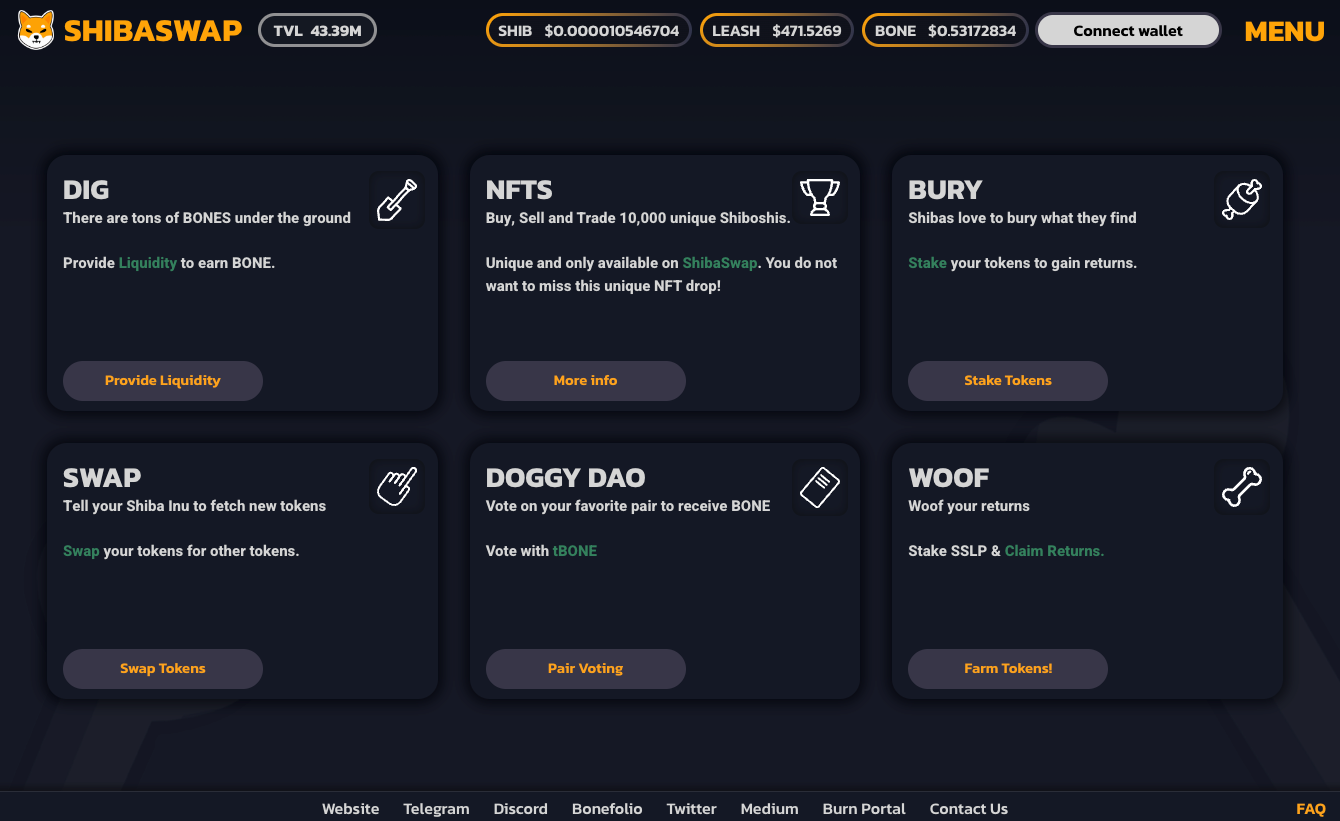 If you're interested in using ShibaSwap, the first thing you need to know are the three compatible crypto wallet services offered by the platform – Metamask, Coinbase Wallet and WalletConnect.

If you've never set up a crypto wallet before, there are two things you need to be aware of: Your private key and the deposit.

First, your private key is a long string of numbers and letters that allows you to access your account. If you lose this key, you’ll lose access to your account and all the tokens in it.

Secondly, you need to deposit enough ETH into your account to cover the gas fees associated with each transaction you make on the Ethereum network, measured in Gwei.

As soon as you've set up your wallet and deposited some ETH, you can convert it into SHIB, BONE or LEASH tokens. You can do this by using the Swap feature on the ShibaSwap website. Once you have your tokens, you can participate in using the various features on ShibaSwap.

One advantage of decentralized exchanges is that they’re not as susceptible to hacks, hence making them more secure. CertiK, a blockchain-based security audit company that scores platforms based on their security, has given ShibaSwap a security score of 92 out of 100.

ShibaSwap has resolved 97% of the 34 issues raised during the audit. That score allows ShibaSwap to go successfully against top decentralized platforms like Polygon and Aave.

Of course, before investing in any platform, always DYOR (do your own research). That way, you can make an informed decision about whether or not a platform is right for you.

So, is ShibaSwap worth your attention? If you're a Shiba Inu user and you're looking for a secure platform that gives you multiple ways of making a profit on your investment, ShibaSwap is the platform for you.

ShibaSwap is the first big project from the Shiba Inu team after the launch of the cryptocurrency in 2021. So far, it’s been a tremendous success, with thousands of users trading millions of dollars in daily volume.

The fun naming of its DeFi terms creates an almost game-like experience that not only allows Shiba Inu to stay true to its brand, but also encourages mass adoption. ShibaSwap is touted as being among the next generation of DeFi platforms, which allow users to easily enter and intuitively navigate the crypto world.