What Is Compound Crypto Protocol?

The decentralized finance (DeFi) industry has brought us many innovative crypto solutions to put our assets to use. By expanding on the concept of traditional finance lending services, new lending and borrowing protocols are readily being adopted by crypto enthusiasts and flourishing in the world of DeFi in the last few years. Among the leading decentralized apps (DApps) in this domain is Compound Finance (COMP), a lending and borrowing protocol that celebrated its fourth birthday this month (September 2022).

What Is the Compound DeFi Protocol?

Compound Finance (COMP) is an Ethereum-based lending and borrowing protocol that algorithmically sets interest rates based on the activity in its liquidity pools. As of the time of writing (Sept. 15, 2022), the total value locked (TVL) in Compound’s smart contracts stands at over $2 billion.

As a Compound user, you can lend and borrow some of the most popular cryptocurrencies instantly without having to go through a traditional financial intermediary. It’s one of the largest and oldest lending and borrowing apps in the crypto world.

Compound is used extensively by DeFi developers, who programmatically integrate it into their DApps and use the protocol for dynamic borrowing and lending. Many yield aggregation protocols and other DeFi apps make use of Compound.

The protocol is also widely used by the general crypto public, not just developers. Non-technical users can borrow funds from Compound by supplying a different crypto coin as collateral.

Compound has been funded by several notable venture capital firms, including Andreessen Horowitz, Bain Capital Ventures and Polychain. The protocol was launched in September 2018 by San Francisco-based Compound Labs, at a time when the lending and borrowing landscape of the crypto industry was still in its early stages of development. Its current main version, V2, was launched in May 2019.

In August 2022, Compound launched V3, which works in parallel with V2. The third version focuses on a higher degree of simplicity in using the app and offers fewer cryptocurrencies, compared to V2.

At the moment, the bulk of activity on the protocol still takes place on V2, with V3 likely to gain wider use in the future.

How Does Compound Protocol Work?

Compound dynamically maintains the interest rates in its coin pools, based on the supply and demand for the particular cryptocurrency. Coin prices are fed into the protocol using Open Price Feed, a system based on Chainlink (LINK) oracles that source crypto price data from various exchanges.

Since supply and demand fluctuate, the interest rate for each crypto varies according to the liquidity in the market. You can check the current interest rate for the crypto you wish to lend or borrow on each market page in Compound.

If you’re a DeFi developer, you can use functions provided by Compound to integrate the protocol into the working mechanism of your DApp.

If you’re an individual looking to lend or borrow crypto, you can easily interact with Compound via its graphical user interface and one of the supported Compound wallet brands. The following wallets are directly integrated by the Compound app:

Once you’ve linked your wallet to the Compound app, you’re ready to start using the protocol.

The first major operation you’ll need to carry out on Compound is to lend some crypto funds to the protocol. This is necessary so that you have the ability to borrow. Similar to other popular lending and borrowing platforms, Compound requires collateral to let you borrow from the protocol. The supplied collateral will earn interest within the protocol, though you won’t be able to redeem the collateral while you’re borrowing.

In the platform’s parlance, lending to the protocol is called “supplying.” If you use Compound’s V2, the most commonly used version as of today, you have a choice of around 20 different cryptocurrencies you can supply.

Typically, the most actively used pools both for supplying and borrowing are based on Ether (ETH) and on popular stablecoins, such as Dai, USDC and USDT.

The top 5 cryptocurrencies by supply amounts on Compound V2 as of September 15, 2022

If you use V3, your choice of cryptos to supply will be more limited. At the moment, Compound’s V3 offers five coins as shown below.

The supply cryptocurrencies on Compound V3 as of September 15, 2022

When you supply your crypto to Compound, you’re issued special ERC-20 tokens called cTokens. For each cryptocurrency lent to the protocol, there’s a corresponding cToken.

For example, if you lend in Dai, you’ll be issued cDai tokens. If you lend in ETH, the corresponding cToken issued to you will be cETH, and so on.

Critical to the entire Compound functionality, cTokens serve several key purposes on the platform beyond simply confirming your deposit. We’ll take a closer look at them later in this article.

Lending a coin to Compound allows you to earn interest from your investment, as well as establishing your eligibility to borrow a different cryptocurrency from the protocol.

For instance, if you’ve lent 100 Dai to the protocol, your borrowing capacity will be estimated based on the rate of the Dai coin determined by the Open Price Feed system.

If you’ve lent funds to the protocol in multiple cryptocurrencies, they’ll all be taken into account in order to determine your total borrowing capacity.

As such, Compound is a typical over-collateralized borrowing system. This carefully maintained over-collateralization allows the platform to maintain its time-tested (at least by the standards of the young DeFi industry) stability and robustness.

When you borrow from Compound, you’re issued funds in cTokens, the same tokens used for lending. Thus, using our WBTC example above, when you choose to borrow in this coin, the funds are actually released to you in cWBTC tokens. You’ll also pay interest based on your cToken liability.

Once you’ve closed your debts to the protocol, you may redeem the funds you lent to Compound at any time. The beauty of lending and borrowing on Compound is that you don’t have to deal with another trader — and there are no minimum investment periods or withdrawal penalties. At all times, you’re transacting with a dynamically maintained set of liquidity pools.

When you redeem your investment, your cTokens, along with the accumulated interest added to them, are converted back to the original cryptocurrency you lent to the protocol.

Compound uses the concept of account health to determine accounts on the platform that are at risk of liquidation. Account health is the ratio of the sum of your supplied funds in an account equivalent to the total amount borrowed.

If your account health ratio falls dangerously low, your account may be liquidated and you’ll lose some of your collateral. Compound doesn’t use a centralized system to liquidate accounts.

The entire procedure for monitoring for risky accounts, and any liquidation itself, are carried out in a decentralized way by platform users who act as liquidators. They then receive a portion of the liquidated account’s funds.

cTokens are a fundamental tool on the Compound platform. When you supply funds, you’re issued these tokens, which act first and foremost as your “deposit certificate.”

All the interest that accrues on your lent funds is added to your cTokens holdings, not to the original crypto coin you’ve invested. As such, these tokens are synthetic assets whose value grows over time.

When you borrow funds, the amount is dispatched to you in the corresponding cTokens as well. Given the nature of these tokens, they have limited-to-no use in the general crypto market outside of the Compound platform.

The COMP token is Compound’s main and native cryptocurrency. An ERC-20 standard token, COMP’s main function is governance. COMP holders have the right either to vote or delegate votes on all key changes concerning the protocol. COMP is currently the ninth largest governance crypto by market cap.

The top 10 governance cryptocurrencies by market cap as of September 15, 2022 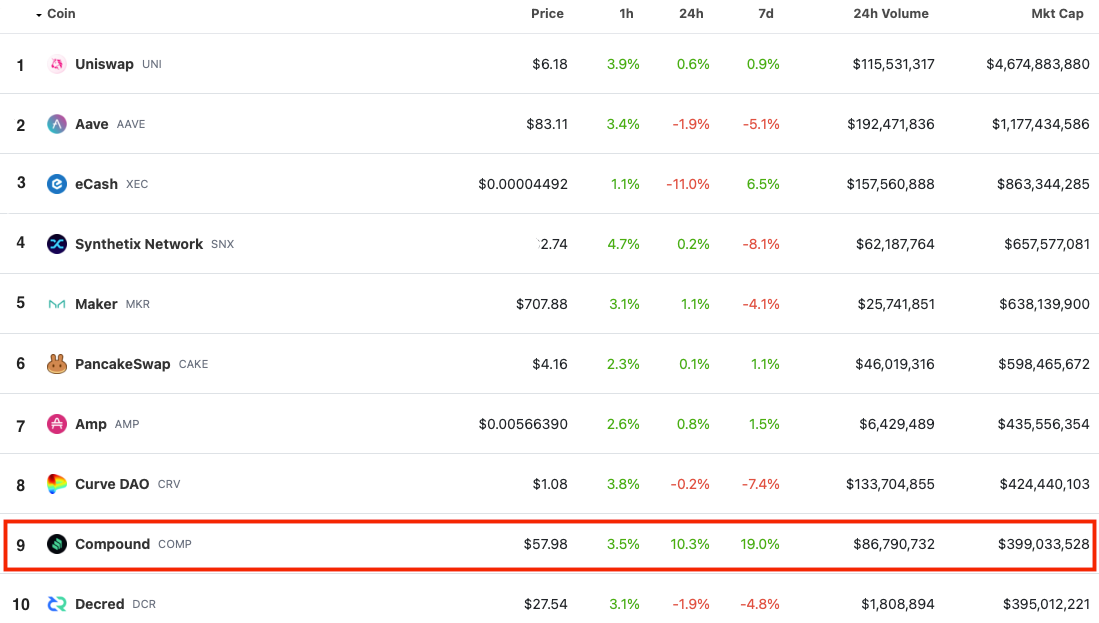 The COMP token was launched in June 2020, initially trading slightly below the $100 level. Less than a year after its launch, in May 2021, COMP soared to its all-time-high price of $910.54. As the overall crypto market cooled around mid-2021, the COMP token entered a prolonged period of decline. 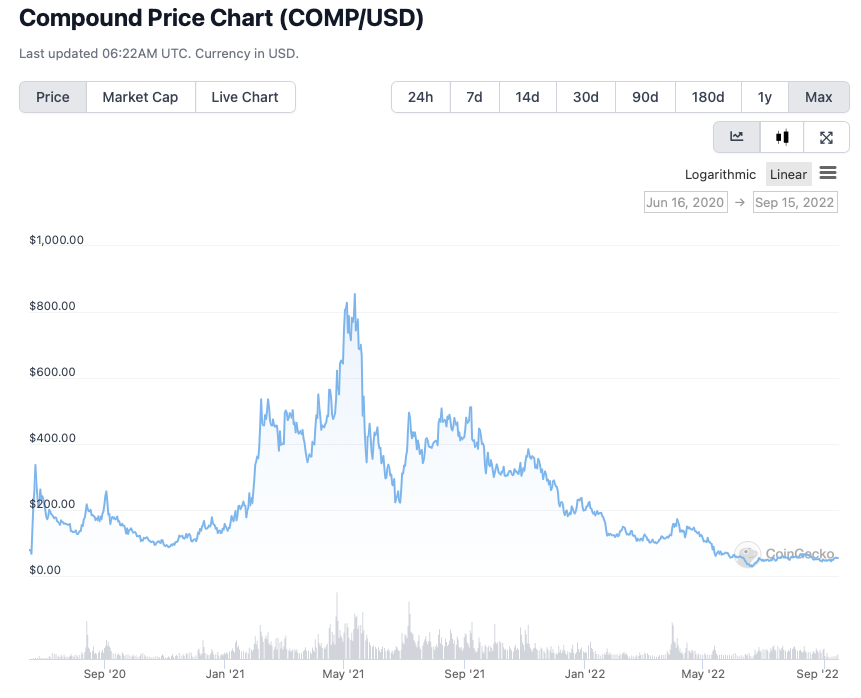 In general, COMP’s price movements have largely followed the overall crypto market, a common scenario for the majority of leading and established altcoins. We expect this trend to continue.

As the crypto market is in the slow recovery phase, COMP should also be trending modestly up in the short- and medium-term future. Over the long term, we expect COMP to perform well, perhaps better than most other altcoins.

Compound’s business fundamentals are strong, and the platform has proven its viability over the last four years. Some investors and analysts even consider COMP to be among the ultimate HODL coins. CoinCodex expects Compound’s price to rise a maximum of $636.78 by 2025, an over 1,000% increase from its current price. DigitalCoinPrice also anticipates a rise, though less dramatic than that forecasted by CoinCodex, to a maximum of about $250 by 2025.

Where to Buy COMP

Since COMP is one of the most well-established altcoins, there’s no shortage of exchanges where you can buy it. Bybit offers COMP on both its spot market with USDT, and on a perpetual COMP/USDT contract.

Compound is among the leading DeFi platforms, and is likely to remain so for the foreseeable future. The protocol’s time-tested business concept, ample over-collateralization, solid market results and ubiquitous brand awareness among DeFi traders all contribute to its ongoing success. Those who consider COMP a HODL token might just be spot-on in their assessment.