What Is an NFT Avatar and How Can I Get One?

Non-fungible tokens (NFTs) have become a hot topic in recent months. While NFTs aren’t exactly a new technology or concept, these unique assets have suddenly started selling like hotcakes with Beeple, CryptoPunks and Nyan Cat selling NFTs for the crypto equivalent of $69.3 million, $11.75 million and $590,000, respectively.

Naturally, the popularity of NFTs has quickly led to the creation of many new ones. Deciding which NFTs to invest in can be overwhelming, not only because there are so many NFT projects to choose from, but because there are also new ones being released almost daily.

In this guide, we’re going to dive into what NFT avatars are, why they’re so popular — and how you can get your hands on your first one.

What Is an NFT Avatar?

NFT avatars are algorithmically generated digital images of cartoon or pixelated characters, usually from the shoulders up, that are in a “profile picture” format. Each NFT avatar is completely unique, with an array of distinguishing traits (i.e., clothing, hairstyles, accessories, etc.). The avatars can be cartoon animals, humans or abstract creatures, with fantasy and science fiction elements.

The market for NFT avatars grew rapidly in 2021, with numerous NFT avatars selling for millions of dollars. This trend sparked a lot of curiosity and interest in NFTs and crypto art, and many enthusiasts have started investing in and creating their own collections.

Institutional investment and private collector capital are largely responsible for the growth of NFT avatar projects. For example, Visa bought a CryptoPunk NFT for $150,000; the Bored Ape Yacht Club minted and sold 10,000 bored apes within twelve hours; and the Penguin NFT Club sold an NFT for the crypto equivalent of $469,000.

The success of new collections like the Bored Apes has led to the creation of similar clubs which try to emulate its success. Lucky Doge Club is one such example, a project successfully launched in August 2021 which managed to sell all 500 NFTs in the collection.

While NFTs may sound like a passing fad, the technology has the potential to revolutionize digital art, as well as ownership of assets and collectibles in NFT games. NFTs are one-of-a-kind cryptographic tokens enabled by Ethereum’s ERC-721 standard, indivisible and therefore completely unique.

Additionally, NFTs could find use cases in many different industries because they can tokenize pretty much anything: art, music, pictures, videos, GIFs, in-game collectibles, certificates and tweets — even guides like this one.

Why Are NFT Avatars So Popular?

The top 6 most popular NFTs on OpenSea. Image source: OpenSea

Considering how much money is being spent for NFT avatars, their sudden popularity is reminiscent of the ICO boom of 2017 and 2018. At that time, several new coins were being launched almost daily, and buyers were investing with the hopes of turning a quick profit from massive upswings in market price.

The growing demand for NFT avatars has predominantly been fuelled by social media discussions about the new tech, and the exorbitant amounts private collectors and institutions are paying for them. Many NFT collectors have changed their profile pictures on social media to their NFT avatar headshots, bringing further attention to the NFT space.

While the market for NFT avatars is still relatively niche, many of the rarer NFTs from popular projects have seen an explosion in secondary market value on NFT marketplaces like OpenSea, with some selling for many times their initial mint price.

There’s no doubt that the market for NFT avatars is growing, as evidenced by the discussions they incite on social media, as well as blockchain data. For example, NFT projects were reportedly responsible for an increase in Ethereum gas prices in August 2021.

Beyond their collectibility and intrinsic value as unique assets, NFTs are popular for the following reasons:

What Are NFT Avatars Used For?

NFT avatars may look like simple digital headshots of cartoon or pixelated characters — but they’re much more than that. Beyond the typical hallmarks of an NFT avatar, such as the profile picture format that shows a headshot of a character from the shoulders up, each avatar is completely unique and non-duplicable.

The avatars are created with programmatically generated traits to guarantee their uniqueness, both visually on a surface level and internally at a code level. The uniqueness of NFTs makes them useful for a variety of uses beyond simple aesthetics. Some prominent examples of use cases for NFT avatars include:

New NFT collections are being launched almost every day, but a few notable examples have made significant waves in the crypto community. These include:

The most expensive BAYC NFT (pictured above) sold for 109 ETH. Image source: OpenSea

Owning a BoredApe NFT grants the holder access to a special “Bathroom,” which is a virtual environment on the official BAYC website where users can write digital graffiti on a communal wall.

The highest sale price to date for a CryptoPunks NFT (pictured above) is 2,100 ETH. Image source: OpenSea

CryptoPunks was the original NFT avatar project, and one of the first NFT avatar projects to be released on Ethereum in June 2017, by Larva Labs. The 10,000 unique, pixelated avatars were free to claim by anyone with an Ethereum wallet. Today, CryptoPunks has achieved legendary status, entering the mainstream art world — and even headlining auctions at major auction houses like Sotheby’s and Christie’s.

CryptoPunks has become the Rolls Royce of the NFT world, with even the lowest-priced CryptoPunk fetching tens of thousands of dollars. The rarest ones — apes, aliens and zombies –— are valued at millions of dollars. 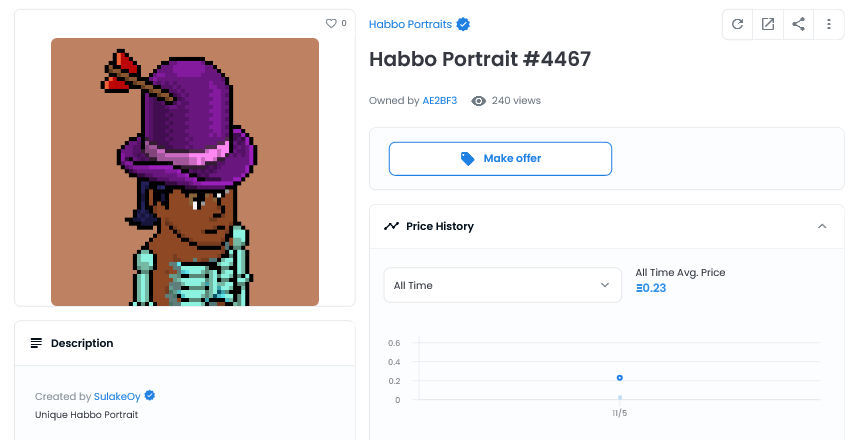 The highest sale price to date for a Habbo Avatar NFT (pictured above) is 0.23 ETH. Image source: OpenSea

Habbo Avatar is an NFT collection of 11,600 pixelated avatars. This NFT avatar project was designed by a group of pixel artists who are the creators of two online games: Habbo and Hotel Hideaway. The team’s long-term plan is to make each avatar usable for in-game virtual worlds in the future.

Cool Cats is an NFT project with 10,000 unique NFT avatars featuring cats. The cats are quite popular, and the most expensive Cool Cats NFT (pictured above) sold for 19 ETH. The team behind Cool Cats plans to include a breeding mechanism, such as the one on CryptoKitties, in the future. 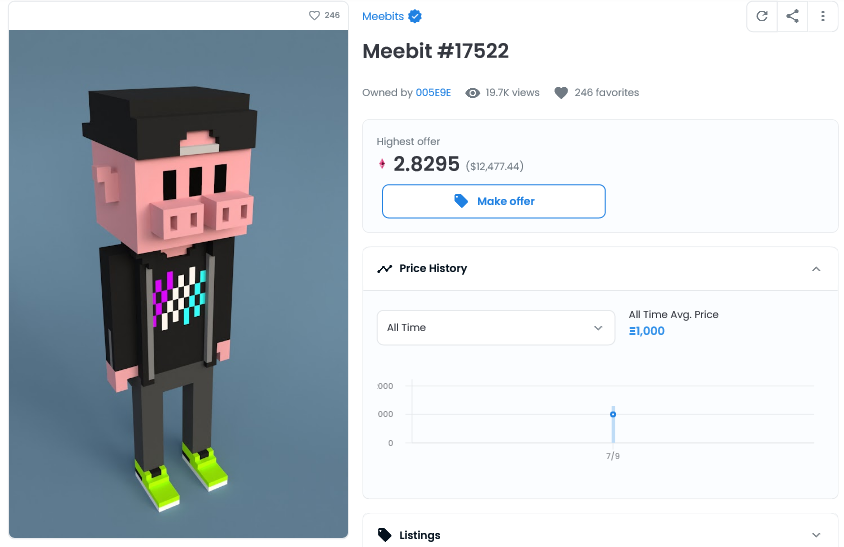 The Meebits are another creation of Larva Labs. Their avatars are 3D characters meant to be used in the metaverse. The Meebits were launched in May 2021, receiving a lot of criticism from the wider NFT community because over half of the 20,000 NFTs minted were reserved as free rewards for CryptoPunk holders. The rest of the collection was available to the public in a Dutch auction at a mint price of 2.5 ETH, which was roughly equal to $10,000 at the time.

How Do I Get an NFT Avatar?

There are a variety of ways to obtain NFT avatars, ranging from making your own using avatar generators to buying existing avatars from NFT marketplaces. Below, we take a look at some of the popular options.

There are numerous NFT marketplaces where you can buy existing NFTs, or list your own NFTs for sale. Some of the most popular ones include OpenSea, AtomicMarket, Async Art, SuperRare, Rarible, and the Decentraland Marketplace.

Create and Sell Your Own Avatars

Once everything is set up, you can “mint” an NFT of a digital media file that you own. This can include images, GIFs, videos or audio files. You’ll have to pay a gas fee to Ethereum to complete the minting process, but once the NFT is created, you can immediately list it for sale.

Are NFT Avatars a Good Investment?

NFTs offer a unique but high-risk opportunity to make huge profits, but there are no guarantees in the crypto world. As an investment vehicle, NFTs are better suited to investors with a large risk appetite.

NFT avatars don’t really have any inherent value other than what the market ascribes to them, which is why their value is constantly fluctuating. Once you obtain an NFT, it’s a waiting game to see how much another investor is willing to pay you for it.

NFT avatars have been a great success in industries such as gambling, art, crypto games, and many others. The technology is going to continue to evolve in terms of utility and features, building functionality that will further improve the NFT market.

However you might feel about NFTs and blockchain technology in general, there’s no doubt that NFT avatars are here to stay. To get started with collecting NFT avatars, check out our step-by-step guide on how to create and sell NFT art.