What Is Reef Blockchain (REEF)?

If there’s one thing computer and finance experts agree on, it’s that crypto is the future. In a world dominated increasingly by cryptocurrencies, there’s a visible shift toward the decentralized, as individuals worldwide discover the liberation of peer-to-peer transactions.

An example of such intricacies is the way that complex systems are simplified for optimal customer experience. In order to achieve this, several prototypes will be made, modified, and sometimes replaced by better ones.

In this article, we'll look at one such innovation to the DeFi space: the Reef ecosystem, which has the most advanced EVM-compatible blockchains. Just as payment switches make several complicated processes seem easy and direct to users of banking applications, Reef’s platform intends to do the same.

What Is the Reef Blockchain?

Reef is a blockchain for DeFi purposes built on a substrate — a blockchain template or framework — launched in May 2021. After several updates and version releases, it has shown its potential as a major player in the DeFi, NFT and gaming ecosystems. It’s a brainchild of Reef Finance, established by Denko Mancheski, and its name is an acronym of its key traits: Reliable Extensible Efficient First layer blockchain.

The Reef ecosystem has expanded from being a DeFi Layer 2 operating system, running on the Polkadot network as a parallel chain, to developing its Ethereum virtual machine (EVM)-compatible blockchain and offering a DeFi operating system.

Not only is the Reef network warming up to take its seat as a major player in the DeFi space, but it’s also set to revolutionize decentralized finance as a whole. Currently one of the most advanced EVM-integrated development environments, Reef is ready to take DeFi to the next level with its cross-chain abilities.

The Reef ecosystem comes after other big-name DeFi blockchains have helped it identify areas for improvement, work on them, and develop a better system. Reef chain offers decentralized application (DApp) developers the opportunity to build on a cheaper platform.

REEF token is the homegrown token of the Reef network, which exists as both a governance token and a utility token. This means its holders can use it for governance functions, and also to pay transaction fees, among other things.

As a utility token, REEF can be used to pay fees for activities on the blockchain like transactions and data storage, while as a governance token, it can be used to become a validator by staking REEF tokens.

The holders of the token can also vote on important matters related to the network, like choosing which validator becomes part of the network. When it comes to maintaining the Reef platform, those holding the token have a part to play: They do this by entering new blocks of data into the blockchain, just likeBitcoin miners. The more REEF tokens one holds, the greater their share of participation.

What Is the REEF Token Used For?

The blood of the DeFi system is the DApps that are engaged in transactional activities, which collectively form the concept of decentralized finance (DeFi) as we know it. These DApps, in turn, make use of tokens for their transactions, but they tend to be too technical for the average person to use because they require the transfer of money from specialized wallets and blockchains on which they’re stored.

For example, Bob has some USDT and wants to make use of a hotel booking DApp that accepts the token. However, he may not be able to make the payment if his tokens are stored on a different blockchain from the one the DApp runs on. To make the payment, he’ll have to make use of a centralized exchange. However, he may not have an account, or he may not know how to go about it. This is the problem the Reef network intends to solve.

The idea of the Reef network has always been to develop a cross-chain DeFi operating system that allows the transfer of value (in the form of tokens) between different blockchains. This opens up the possibility of transferring value between centralized and decentralized exchanges.

Developers of DApps on the Reef blockchain will have a cross-chain operating system that connects value between different blockchains. In effect, it’s acting as a bridge between the requester (Bob) and the supplier (the vendor of the DApp).

Reef chain can also develop other tokens on its blockchain, just as thousands of tokens are built on the Ethereum blockchain.

How the Reef Blockchain Works

As mentioned, Reef chain uses NPoS, one of the forms of the well-known proof of stake (PoS) consensus. PoS is a system whereby validators are chosen based on the size of their stake.

With the NPoS mechanism, the nodes on the network are either validators or nominators. The nominators stake some tokens (in this case, REEF) in order to nominate validators. The staked amount determines the number of rewards for which a nominator will be eligible.

For example, there are four nominators on a network: Sam, Paul, Chris and Veronica. Sam stakes 50 REEF tokens, Paul stakes 50, Chris 30, and Veronica 10. After they’ve nominated the validators they want, the validator with the highest voting power — i.e., the highest number of nominations — will be chosen to validate the next block. If Sam and Chris both nominated the same person, the reward would be shared proportionately to their staked amounts.

This mechanism is regulated and coordinated by a smart contract.

Key Features of the Reef Ecosystem

Blockchains that utilize the PoS mechanism experience fewer energy issues than ones that use PoW — e.g., Bitcoin. PoW requires nodes to solve cryptographic puzzles requiring specialized machinery. Hence, a lot goes into purchasing these machines to perform the calculations, known as mining, and a substantial amount of electricity is also consumed in the process.

The energy that Reef consumes is comparable to that of a shopping mall. In comparison, Bitcoin alone consumes more energy than the country of Poland. With the effects of climate change, and calls for a reduction in nonrenewable energy consumption, blockchains that utilize the PoS mechanism are likely to lead the way into a decentralized financial future.

Reef chain utilizes the Solidity programming language. Solidity is an object-oriented programming language (OOL) used by the EVM (among others) to develop smart contracts. Since it’s compatible with the system, it enables developers of DApps on the Ethereum network to import their DApps to the Reef network without having to rewrite the code.

A feature that isn’t present on Bitcoin or Ethereum is the ability of Reef chain to upgrade and develop itself. The development of blockchain has been stunted because of the difficulty of its upgradability, whereby the blockchain has to be stopped and a new one created, known as a hard fork.

Some cryptocurrencies have tried to incorporate efficient development processes through governance models, which move toward centralization. Ethereum, however, allows for upgrades through its dynamic development team, but its highly decentralized users have hampered the integration of useful updates. With the advent of on-chain upgradability, higher versions of the blockchain can be developed without major disruptions to its functioning — and without sacrificing its decentralized nature.

Note: Figures below are accurate as of this writing, and are approximated up to two decimal places where applicable.

Is Reef Blockchain a Good Investment?

Reef offers retail investors a greater opportunity to participate in DeFi frameworks by removing the technical barriers typically associated with them. This is sure to attract more investors to the network, and provide Reef with the foundation required to blossom into a top-notch DeFi platform.

With considerably low fees, Reef Chain has a real chance at beating all competitors in the cross-chain service providers niche. Thanks to its ability to solve the lack of funds in DEXs by acting as a bridge between CEXs and DEXs, and serving as an aggregator of liquidity, it also has the potential to become the backbone of most DApps.

The network's opportunities are diverse and dynamic, ranging from REEF Baskets engine, REEF smart yield engine, scalability and security, to a decentralized trading platform. All these come with a simple and user-friendly interface. The blockchain has a faster transactionfinality rate (40 seconds) than both the Bitcoin (3,600 seconds) and Ethereum (600+ seconds) blockchains. It also enjoys a faster block time (10 seconds) than both Bitcoin and Ethereum.

All these point to the potential the chain has in the DeFi space.

REEF coins can be traded as a derivative product on many popular exchanges, including Bybit.

On Bybit, the trading of the REEF derivative is made simple by pairing it with USDT as a USDT perpetual contract. Essentially, you’re using the USDT stablecoin as collateral to trade the REEF derivative, and all the settlements are done in USDT alone.

Follow the steps below to trade the REEF/USDT perpetual on Bybit.

You must have a registered Bybit account to trade any asset on the exchange. Theaccount creation process is straightforward, and can also be completed by visiting the official Bybit exchange website.

Visit the Derivatives section on the exchange and search for the REEF/USDT asset class. Make sure to have USDT in your Bybit derivatives wallet, as all the settlements for the trade are made in USDT.

Once done, you’re ready to place your trade. You can do this by using a limit, market or conditional order. Bybit allows a 10x margin on the REEF/USDT perpetual contract with which you can maximize your profits. If you’re using a limit order (recommended), enter the price at which you want to enter the market and the number of REEF contracts you want to trade. 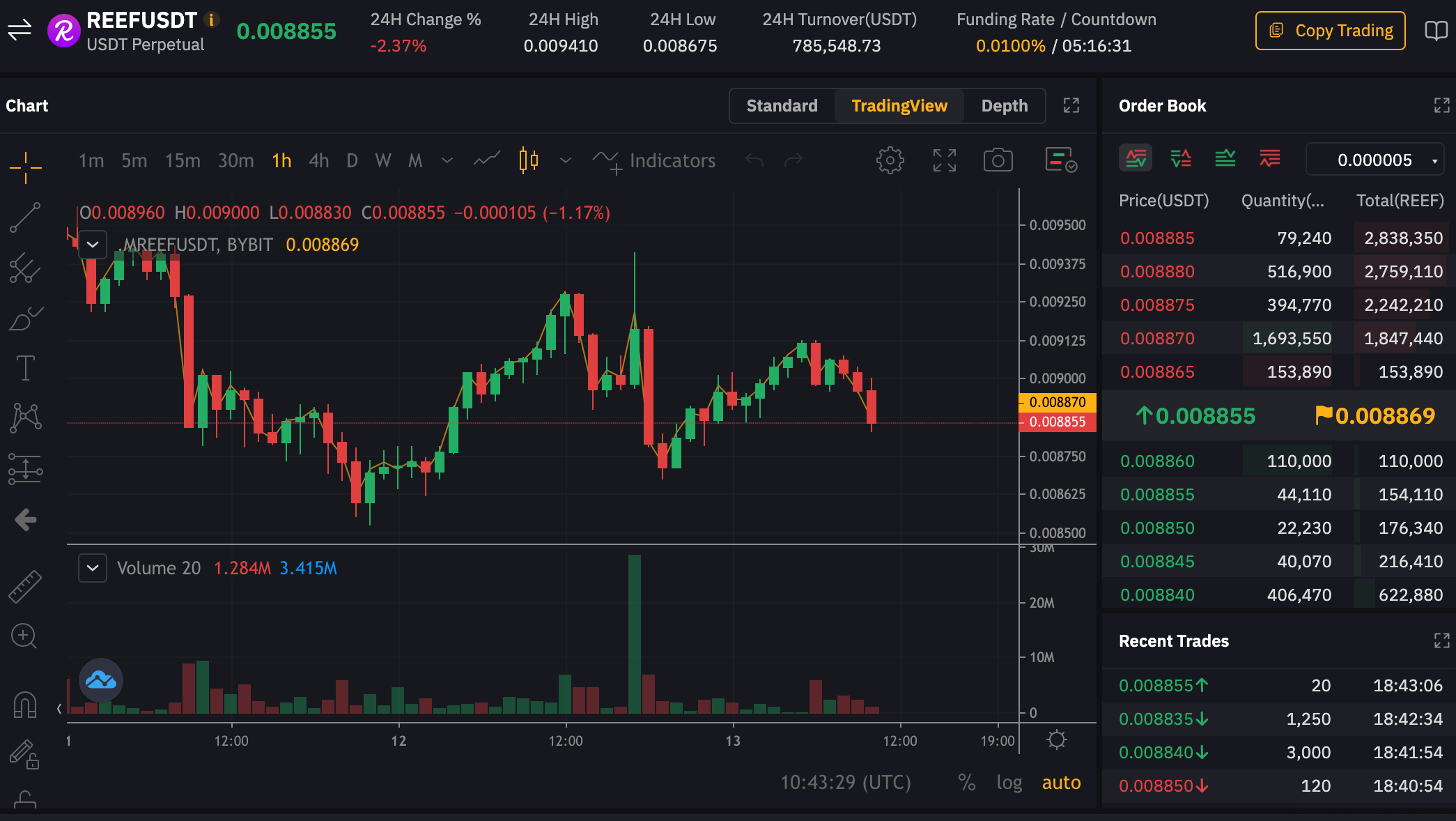 All you need to do now is to place the order. Make sure to place accurate take-profit and stop-loss limits to mitigate the risk of liquidation.

Once the order is placed, you can see all the details in the order section at the bottom of the trading terminal. The trade will be closed once the asset class price reaches either the take-profit or stop-loss levels.

It's no news that the key to making it big in any market is the ability to spot opportunities. In other words, foresight in financial matters is crucial to success. You may not have spotted the potential Bitcoin had a decade ago, but here’s another chance at taking full advantage of innovation in the crypto space integrating the next big thing in the DeFi space: Interoperability.

The Reef network is a major improvement to the legacy blockchains, but it also has the potential to go beyond that to being a liquidity bridge (or payment switch, as we know it). It also offers developers Reef chain development tools, and investors the opportunity to profit from the expected growth of decentralized finance. If you love adventures, here’s your chance to embark on one in the DeFi space.