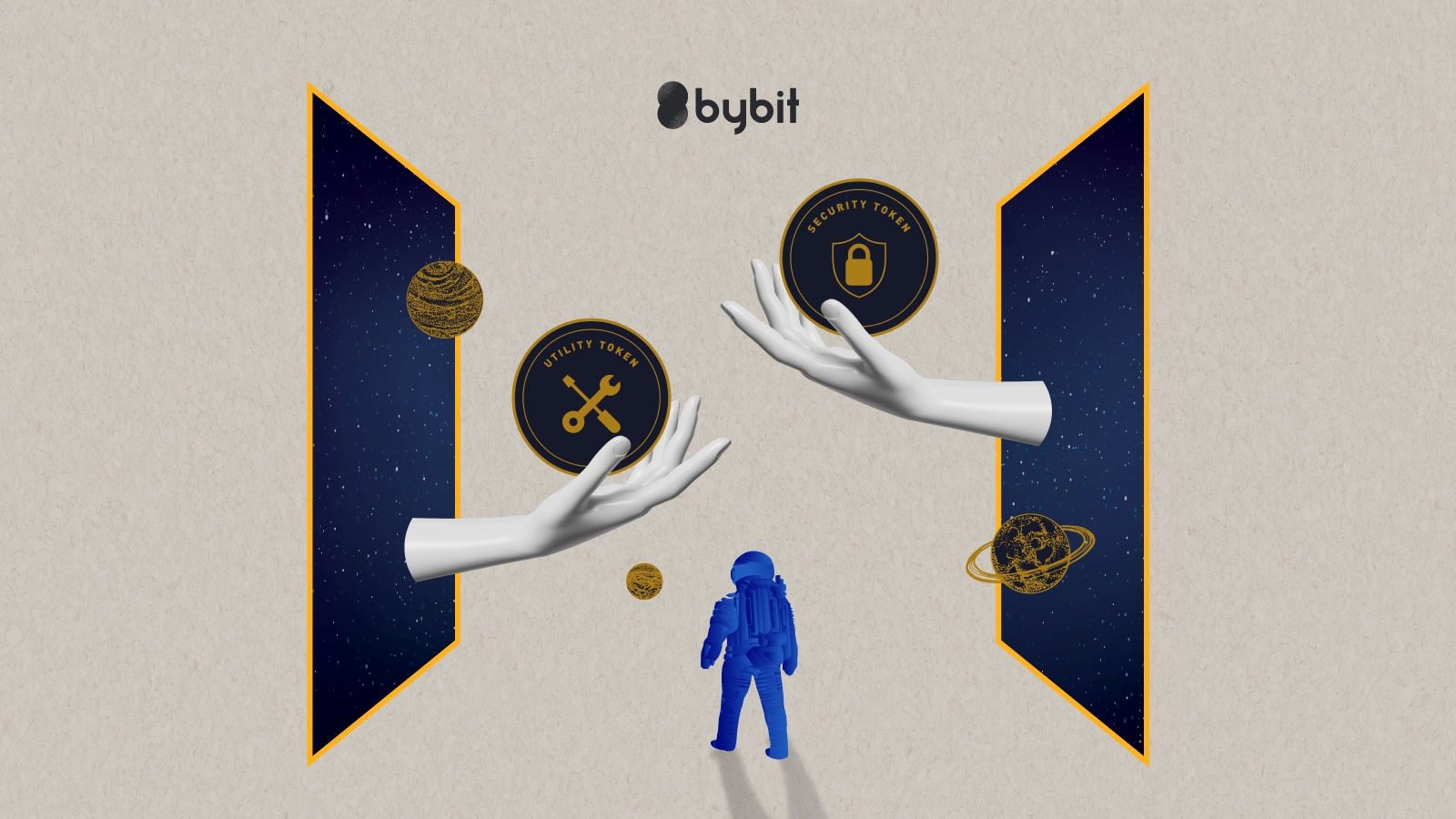 If you’re new to the world of cryptocurrency, you may have heard of utility tokens and security tokens. These tokens perform several functions, some similar and some not. During trade and issuance, for instance, their procedures and uses vary. Security tokens are distinguished uniquely from utility tokens.

What Is a Token?

In crypto, tokens reside on a particular cryptocurrency’s blockchain. Tokens are often released when a company hosts an initial coin offering (ICO), which is just like an initial public offering (IPO) in the case of stocks.

The distinction between an ICO and an IPO is that in an IPO, you will receive stock in return for your deposit, while in an ICO, you will receive a token. These tokens may then be redeemed in the future to obtain access to a company’s product or service, along with other benefits offered by each individual token.

So, what exactly is the difference between a coin and a token? Some people use the word “coin” to refer to what others refer to as “tokens,” and vice versa. Some will label anything resembling a digital property as either one or the other. The words are often used interchangeably, which may be a source of misunderstanding for crypto beginners. However, if you’re a potential investor, or want to become well-acquainted with crypto, it’s crucial to understand the correct terminology.

First off, let’s talk about what coins are. A digital coin is usually associated with a particular blockchain and labeled as an exclusive asset. Consider the cryptocurrencies Bitcoin, Ripple and Ethereum, each of which has its own blockchain.

The Bitcoin blockchain is where BTC exists and functions. The same, for example, goes for XRP on the Ripple blockchain and ETH on the Ethereum blockchain. The blockchains track all transactions and are checked and validated by special computers — known as nodes — globally.

Tokens, on the other hand, are a bit different. Tokens are often actually referred to as coins, too. This, though, is incorrect. Whole coins are cryptocurrencies that operate independently from any other platform, and tokens require platforms to exist and operate. As such, existing blockchains generate tokens.

Let’s take, for example, Ethereum, the most well-established and successful blockchain token network. ERC-20 tokens are created on the Ethereum blockchain. Other cryptocurrencies, such as NEO and EOS, also have their own tokens. In fact, anybody with a programming code can create their own custom token. Though tokens on the Ethereum network are known as ERC, NEO, for instance, uses NEP-5 tokens.

What is a Utility Token?

Let’s take a look at utility tokens, one of the most common forms of digital tokens. Commonly known as user tokens or app coins, utility tokens serve a particular purpose. These tokens could be used on a website to gain preferential benefits for services, for example. Most utility tokens are handed out and talked about in the context of ICOs. Companies make use of them to generate interest in their offerings, as well as for application and value generation in blockchain ecosystem services.

Since token supply is small, token value is projected to grow in parallel with increasing demand. If a token is linked to a DApp, the value of the token can increase as the network grows.

There is a widespread misconception that as the number of users using a utility token grows, the token’s value grows as well. Utility tokens are not primarily intended to be investment instruments, and buyers whose primary goal is to make a profit are discouraged from engaging in public sales.

How do Utility Tokens Work?

During ICOs, a company may decide to offer utility tokens and profit off of digital coupons. As mentioned above, they’re similar to shares, in the sense that there is a level of governance issued with each token. For example, they can be used to enable voting rights to token holders, enable token holders to connect the network, and assist in the development of a system-wide internal economy. Token holders, for instance, by staking their tokens in a network, can ensure the right to vote on different decisions regarding the network and its well-being.

Filecoin is one example of a utility token. The project team was able to collect $257 million from the auction of tokens and with that, Filecoin’s token holders have access to an open cloud computing network.

Usually, there is a cap on token availability, which can cause the value of tokens to increase due to supply and demand. The theory goes: With all else being stable, an increase in demand would result in a higher token price. And even though, as we said, utility tokens weren’t designed to be used as an investment, some investors nevertheless see them as one.

For whatever purpose, some projects choose inflationary token models. These models emit tokens continuously, while others do not limit their supply at all. The nature of a company’s token economy ultimately, therefore, has the potential to affect investment decisions.

What is a Security Token?

Security tokens are intangible assets whose worth is derived from a tradable external commodity, such as a cryptocurrency. They are highly regulated by protection legislation and must comply with relevant laws. Any failure to comply may result in serious repercussions, including fines and the project’s possible derailment.

The Securities and Exchange Commission (SEC) in the United States is in charge of overseeing how securities are categorized and regulated. The SEC also has rules on how firms should report their share offerings, which also apply to cryptocurrencies and blockchain platforms. The Howey Test is a methodology for determining whether throwing capital into a company constitutes an “investment,” and if so, what type of investment.

A blockchain-based security token, also known as an “equity token” or “investment token,” is a cryptographic token that is connected to a stock transaction in the world of blockchain.

A security token reflects a stake of the business issuing the token, rather than providing a direct value to an investor, such as access to its ecosystem. Most investments in security tokens are profit-driven. Benefits of security tokens include being willing to keep them in multiple wallets, exchanging them for other properties, and using them as a kind of security for a loan.

How do Security Tokens Work?

A Security Token Offering (STO) is a method of distributing tokens to investors, similar to an ICO. Security tokens are similar to shares in terms of gains, paying interest, paying dividends, or investing in properties or other tokens to produce income for token holders or investors. They are subject to financial and capital market legislation by the SEC because they offer privileges and perform very closely to other financial instruments.

Security tokens take advantage of the pace and reliability of blockchain technologies, but also have the advantage of strict government legislative policies that prevent fraud. Attempting to explain the legal aspect is tough. Essentially, where there is an anticipation of benefiting from the actions of another, a token is considered a defense.

Entities will submit investment contracts prior to their STO that must lawfully reflect the possession of a digital or physical asset or right, similar to a financial instrument. If the STO fails to meet such rules, fines will be imposed and the project’s progress may grind to a halt entirely.

Security tokens are designed to be used as investment vehicles and are mainly profit-driven. Token investors receive dividends by receiving additional coins if the token’s issuing company makes a profit in the market. Ownership of the business and overall governance will be passed to customers who are in possession of the security token. The blockchain platform can then also be used to build a voting mechanism that allows customers to have a voice in the company’s decision-making process, much like shareholders.

Utility tokens, in contrast, don’t allow their investors to attain power over a company’s decision-making process. However, they make it easier for customers to connect with a company’s services. Utility tokens are also not governed by any laws, the way security tokens are by the SEC. Some of the primary features that differentiate the two tokens are:

Utility tokens are used to finance initial coin offerings (ICOs) and to build an internal economy within a project’s blockchain. A utility token holder would also have some voting rights within the ecosystem. Security tokens are instead an investment contract that has been validated on the blockchain and represents the legitimate possession of a tangible or digital commodity.

There is no correlation between the price of utility tokens and the company’s overall value. This makesperformance  predictions more difficult. However, with security tokens, the value of a business is explicitly linked to its price. The token becomes more important as the business grows and becomes more valuable.

Both utility and security tokens have their own sets of drawbacks, benefits and risks, as does any investment. Nonetheless, it’s important to distinguish between the two, and to ensure you know what you’re getting yourself into before choosing to invest.

With the popular rise of blockchain technology and cryptocurrencies, both utility and security tokens are projected to grow in value over time. With that said, distinguishing between the two can be complicated at times. Binance token (BNB) serves as a great modern example of a token that has developed over time. It can now be used as a means of exchange, despite the fact that this wasn’t how it was initially planned to be used.

Keep in mind that a security token is a contract that represents the ownership over a legitimate asset, while a utility token is a tool for incentivizing holders to contribute to governance and decision-making within the network.