Gravestone Doji Candlestick: What Does It Mean? 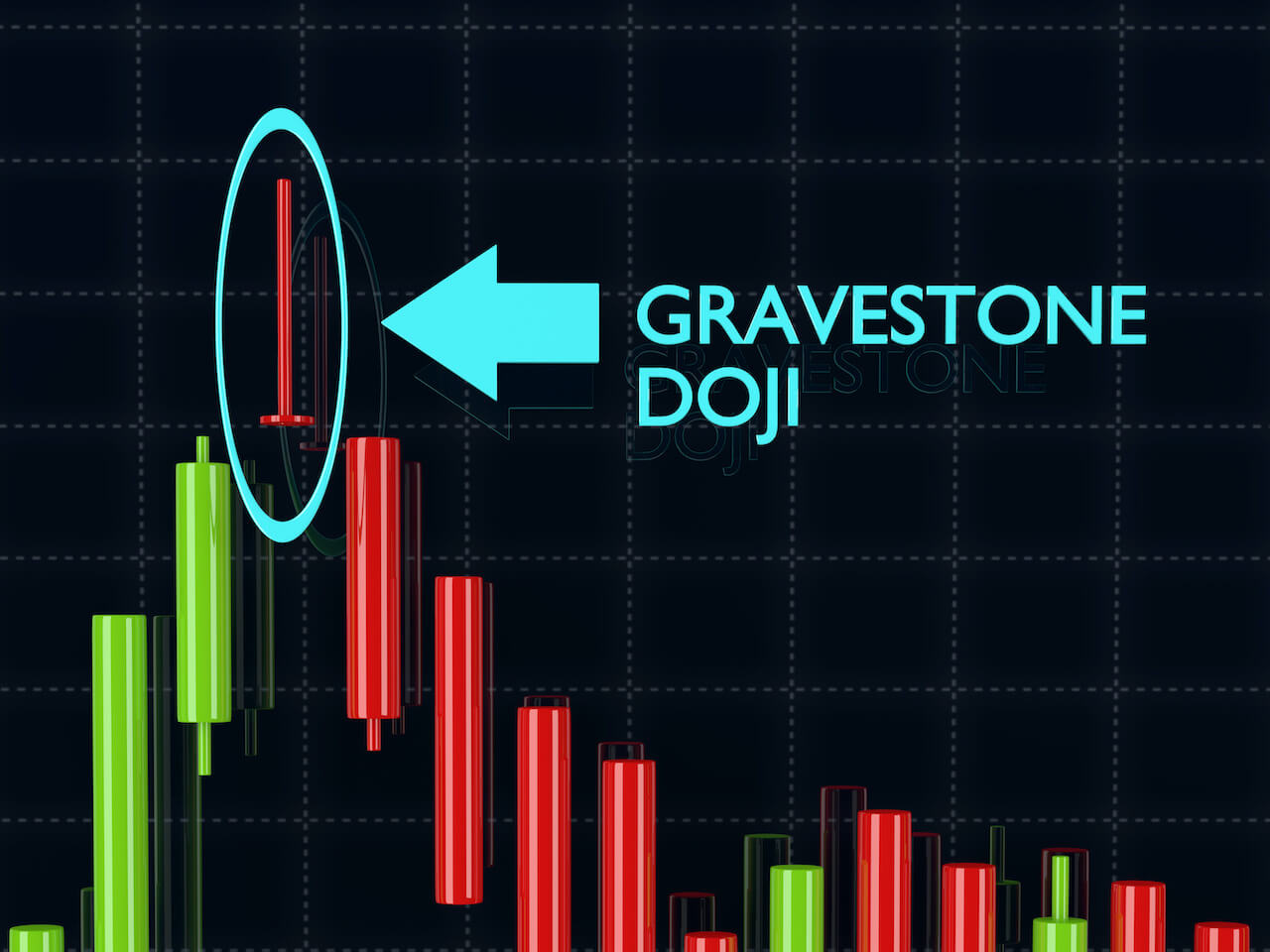 Day traders and swing traders who’re starting their trading journeys would consider strategies that revolve around technical indicators. While this is not a wrong approach, some candlestick patterns can provide accurate signals that might boost profitability. One of these patterns is the Gravestone Doji candlestick, which can be observed quite often on the candlestick chart.

A Gravestone Doji is a bearish candlestick pattern with a very short or preferably invisible body and a long upper shadow. Ideally, the open, low, and close prices should be relatively at the same level. It usually appears at the top of an uptrend and anticipates a trend reversal. The longer is the upper shadow where the more bearishness should be expected.

The Gravestone Doji usually shows up where the resistance level is forming, which can be used for future reference whenever the price comes back to test the same level again.

As mentioned, the Gravestone has a very long upper shadow, while the body is at the very bottom of the candlestick, suggesting that the open, close, and low prices coincide. Thus, we get an inverted T-shaped pattern. Ideal Gravestones are relatively rare, but the close and open should be very close if not at the same level. Here is what the pattern looks like on the chart:

While the Gravestone Doji should be seen close to the top of uptrends, you can sometimes find it at the bottom of a downtrend, though this is a rare occurrence. In this case, you should not consider it to be bullish. Instead, interpret it as a trend continuation signal, as the downtrend potentially has more room until finding the oversold zone.

How Does a Gravestone Doji Form?

The Gravestone Doji forms when the price closes at relatively the same level where it opened, providing that the open coincides with the low or at least the two are very close. This pattern occurs when bulls have enough strength to push prices upward, but they’re suddenly out of steam and return to previous levels after hitting an area of strong resistance.

Bulls face strong opposition when the Gravestone is at its high, and the selling pressure pushes prices back to the opening price during a given period. That suggests the market participants rejected the bullish rally, and a potential downtrend is just around the corner.

On the contrary, right after a Gravestone Doji, traders would either open short positions or close their existing long positions. The pattern helps traders better visualize the resistance level, which can be tested again in the near future, especially when the price makes another bullish attempt.

As a rule, Gravestone Dojis would show up at the top of uptrends. However, if you can sometimes encounter it at the bottom of an ongoing downtrend. Don’t be confused about it – it’s still a bearish signal that anticipates trend continuation. In this case, bulls tried to reverse the bearish trend but failed, and the price is likely to continue its downward move.

How to Trade With the Gravestone Doji?

When analyzed separately, the Gravestone Doji might suggest local price rejection. But if it forms at a confluence level near the resistance zone, it acts as a strong sell signal.

If the Gravestone Doji appears at the top of an uptrend, traders would be interested in opening short positions. Those who have open longs would close them. However, it is crucial to base your decision on additional technical indicators rather than on the candlestick pattern alone. You can use a slow and a fast-moving average along with momentum indicators, such as Stochastic or the Relative Strength Index (RSI), to assess whether the price has entered the overbought level.

As a rule of thumb, traders will also check the volume. A higher volume increases the reliability of the Gravestone Doji.

The shadow’s size is critical – a longer wick would make this pattern more relevant as a trend reversal signal.

Trading Gravestone Doji at the Top of an Uptrend

If you spot a Gravestone Doji forming after a bullish move, you should be ready for a price reversal. In fact, you should expect this pattern at the top of uptrends most of the time. However, it doesn’t make sense to open a position right after the pattern, as the uptrend might make another attempt to break the newly formed resistance. Instead, be ready to enter the market with a short position after the first candlestick closes below the Gravestone Doji’s low.

The stop loss of the position should be set right above the high of the pattern, while the take profit target should be double the size of the Gravestone Doji. Alternatively, you can set a trailing take profit to take the most from the bearish move.

It’s also to check the RSI or Stochastic – if the price is in the overbought zone (above 70% or 80%, respectively), then the Gravestone Doji’s signal is even more relevant. The same is true if the volume is high.

In the example below, the Gravestone that came after an uptrend was followed by a retreat. When the pattern showed up, the Stochastic lines crossed, and the indicator was leaving the overbought zone. 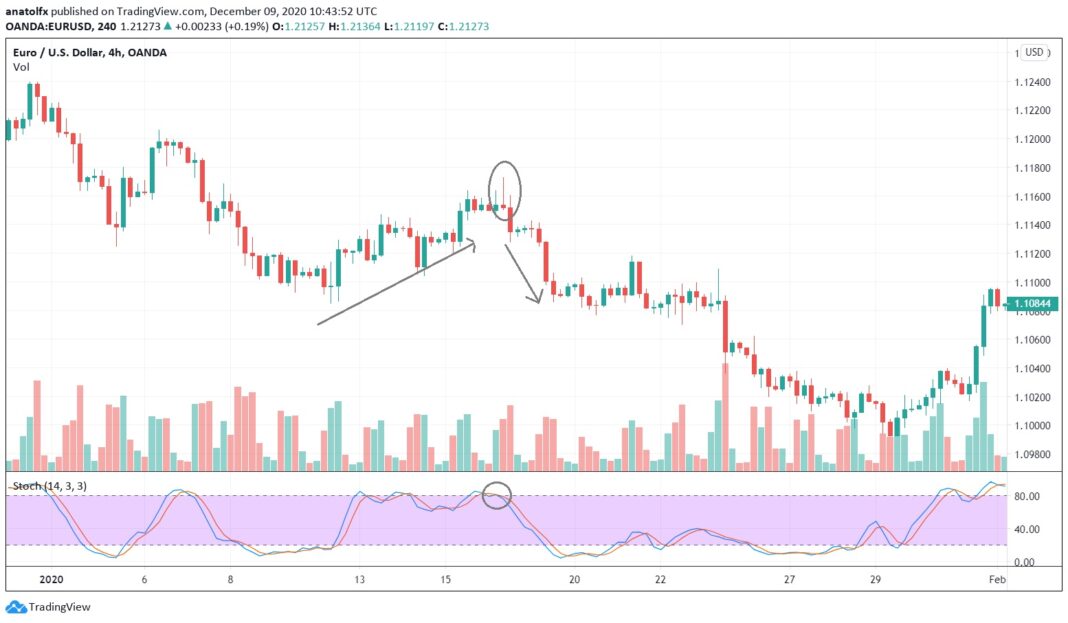 Trading Gravestone Doji at the Bottom of a Downtrend

Sometimes the Gravestone Doji might show up in a bearish market, but this is a rare occurrence. In this case, you should not treat it as a trend reversal signal because it might now end up with a bullish move. Most of the time, it suggests that the bearish move is about to continue; hence, it makes sense to open a short position. Bulls who anticipate the reversal of a bearish trend should not go long after spotting this pattern in the middle of the downtrend.

In the example below, the GBP/USD pair has formed a steep downtrend, and the market has been in the oversold level for a while. The prerequisites for a rebound or at least a sideways move were there, but then the Gravestone Doji showed up. After the pattern, bulls have attempted a reversal. But the bears came back stronger and countered with an even lower price. Of course, this trend is applicable to cryptocurrency trading. 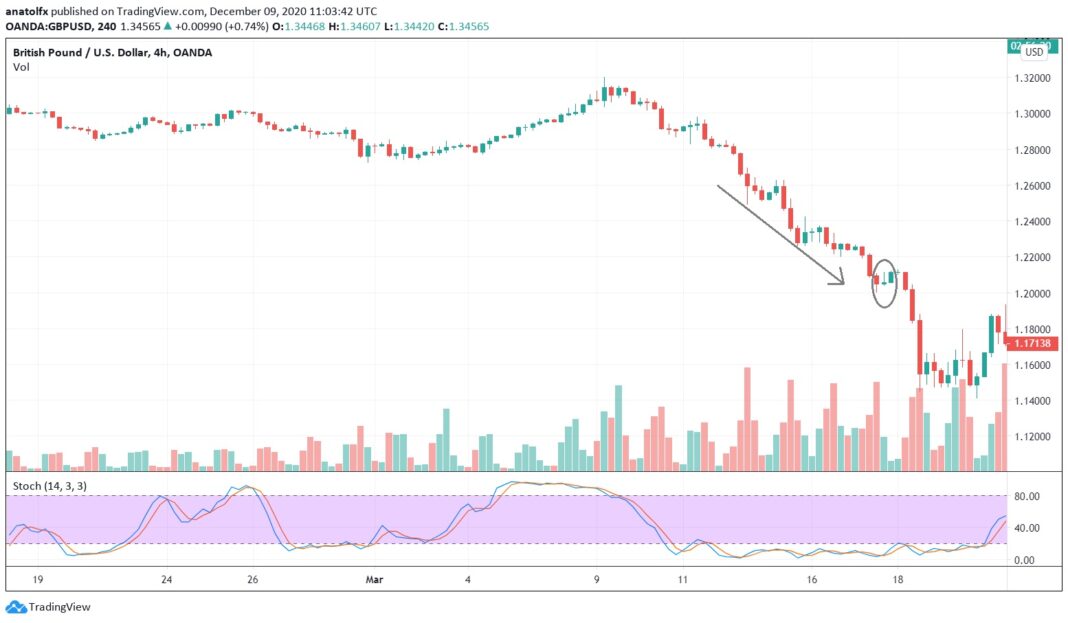 In this case, you should have opened a short position after the first candle that closed below the Gravestone Doji, with similar stop loss and takes profit targets as discussed above.

Constraints of a Gravestone Doji

Even though the Gravestone Doji is regarded as a bearish signal, you should not open positions based on this pattern alone. There are some limitations that you should consider:

All in all, you should also use other indicators to get more accurate buy and sell signals.

The Patterns Similar to Gravestone Doji

The Gravestone is part of a group of candlestick patterns called Doji, and its form shows similarities to other patterns, such as the Inverted Hammer and Shooting Star.

It would be best if you were careful not to confuse this pattern with the inverted hammer. In which it looks similar but has a slightly larger body and forms at the bottom of a downtrend, and anticipates an upcoming bullish move.

Suppose you see a candlestick with a long upper shadow at the bottom of a downtrend. In that case, you should make sure to understand the difference between the Gravestone Doji and the Inverted Hammer. That’s because they anticipate opposite moves. The Gravestone points to the continuation of the downtrend, while the Inverted Hammer expects a trend reversal. The latter has a visible body, and the lower shadow is relatively more visible.

Also, the Gravestone Doji is very similar to the Shooting Star pattern. As both reversal candlesticks appear at the top of uptrends and have longer upper shadows. The main difference is Shooting Star has a visible body whose close price should be ideally below the open.

In conclusion, the Gravestone Doji is a great pattern. Especially when it can provide decent bearish signals, mostly when they show up at the top of uptrends. Still, traders are advised to use it in combination with technical indicators.

On a side note, Gravestone is the opposite of the Dragonfly Doji, which has the same characteristics but inverted. Consequently, Dragonfly would anticipate the reversal of a downtrend. The open, high, and close of the Dragonfly have to be relatively the same level, forming a T-shaped candle. As with Gravestones, it is hard to find ideal Dragonfly patterns, so slight variations are allowed.

The Gravestone and the Dragonfly are essentially the same phenomenon but mirrored. You can trade both of them with the help of additional technical indicators that can provide more insights into the price action’s behavior.