What Is a Doji Candle & How to Trade With it? 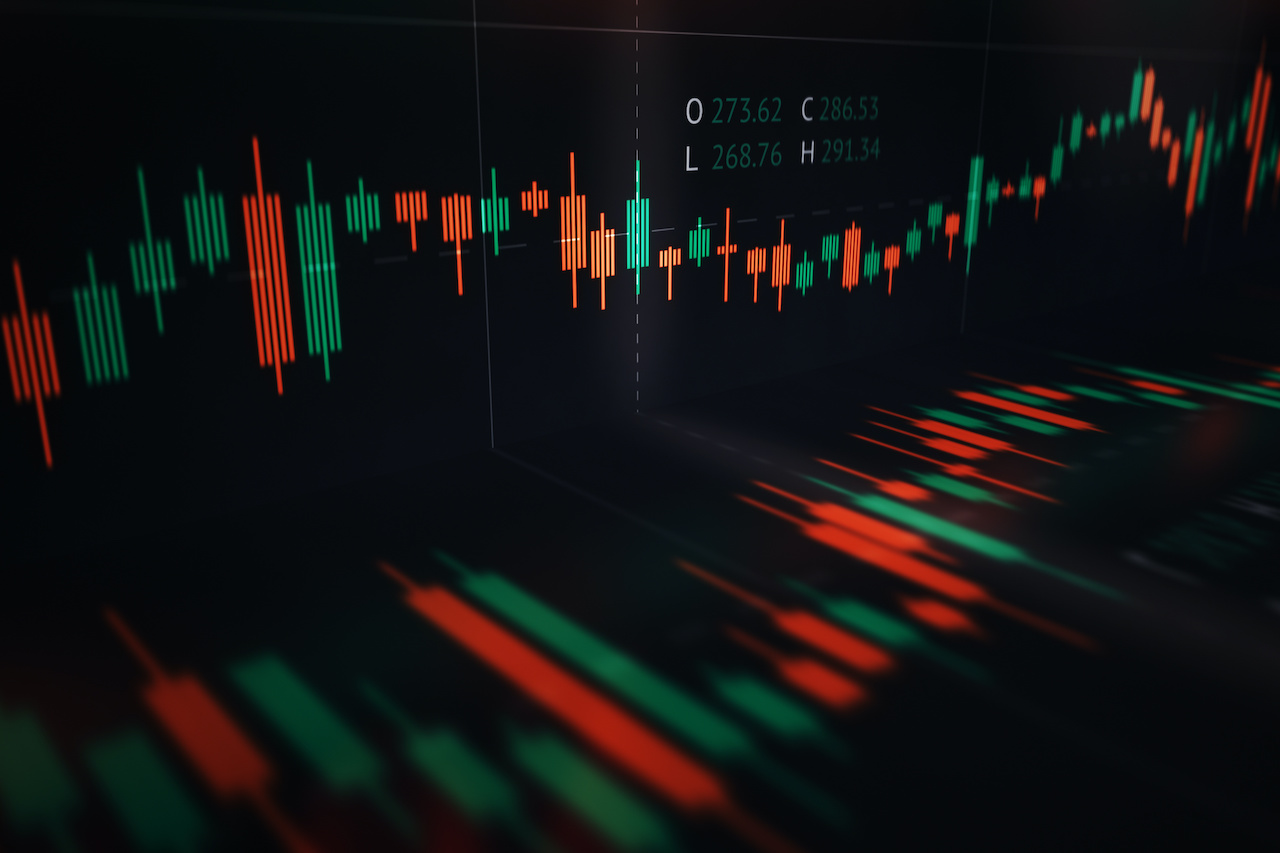 The Doji candle, referred to as the Doji star, signifies the indecision between the bulls and bears of the financial or crypto market. This candlestick chart pattern forms specifically when a market’s close and open prices are almost the same. There are plenty of Doji patterns, including dragonfly Doji, gravestone Doji, and long-legged Doji.

Doji candlestick is mainly used to indicate indecision since the high, low, open, and close in which these four prices are the same.

Still, not all of these Doji variations are used the same way. In fact, Doji can also be used to indicate the slowing momentum of an existing trend. That is why you must understand the differences and interpret the differences of these formations to minimize risks and earn a consistent profit.

What Is a Doji Candlestick Pattern?

A Doji candle is a candlestick formation that shows up when the open and close price appears relatively at the same level, while the shadows are relatively long. The wick is made up of a vertical line of the Doji pattern, while the body is referred to as the horizontal line.

Doji candlestick typically forms when the market opens, and bullish traders push the prices up. While the price pushes down when the bearish traders attempt to reject the higher price. The differences in the opening and closing price of an asset are reflected through the body of the Doji candle. Whereas the top wick represents the highest price and the bottom represents the low.

Then, a cross shape is formed when the price open and close price of an asset is more or less at the same level. The cross shape appears in a form where the candle’s body will either be very small or almost non-existent, while the upper and the lower wicks are at equal length.

Where Doji Candlestick Get Its Name?

A Doji refers as “dо̄ji” in Japanese, is a name in which the candlestick has an open and close that are equal and often the components in patterns. When translated in Japanese, Doji means blunder or mistake, where it refers to the rarity of an exact match of a closing and opening price.

Ultimately, it is a transitional candlestick that primarily defines the equality and indecision of the bull and bears in the financial market.

How Does Doji Candlestick Work?

Since most traders rely on historical data and real-time price action for the buy or sell signals, the Doji candle proves to be invaluable to evaluate the market condition. For example, if Doji appears during a bullish trend, it signals that the market has entered a state of indecision and neutrality. This can end up with the continuation of the trend or with its reversal.

However, these signals are insufficient to conclude your decision to exit a position. So using a technical indicator like relative strength index (RSI), bollinger bands can further confirm what Doji suggests.

Assuming Bitcoin’s price opens at $55,903, the buyer demand is higher, causing the price to move on an uptrend reaching a high at $57,135. Then sellers tried to push the price lower to a low of $54,715. However, the day ends with a closing and opening price at $55,903, forming a long-legged Doji, as shown in the photo. It means the buyers and sellers have come to indecision, referring no directional bias occurs for that day. 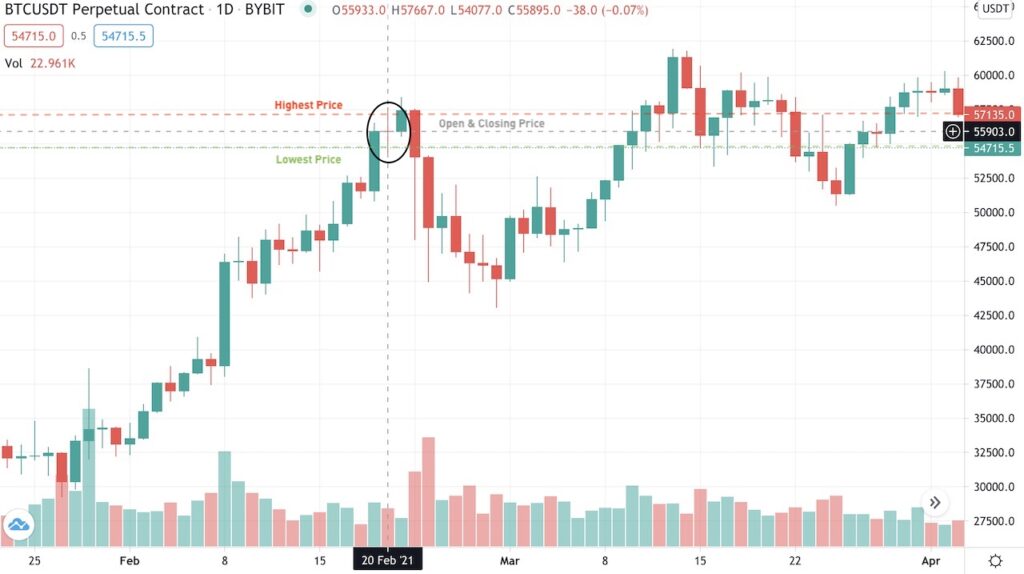 How a Doji Candle Forms

A neutral Doji candle forms when the market opens, and bullish traders push the prices up and vice versa for bearish traders. However, it’ll find strong resistance or support at some point and goes in the opposite direction, the same level of counteraction is found. In the end, it closes at relatively the same level where it opened, which suggests a moment of indecision.

For example, the market can open higher, after which bears reject the ascension and push the price back down to a certain level. As a result, the market tries to balance the situation by returning near its open. This kind of Doji is regarded as a trend continuation signal, but sometimes it can lead to a reversal.

It’s worth noting that the Doji pattern doesn’t necessarily mean reversal or continuation but simply indecision. Such candles can often be seen during periods of resting following strong uptrends or downtrends. The market may continue its way after resting.

However, it can also suggest that the existing trend is losing strength. It’s challenging to confirm the Doji signals without confirmation from the technical indicators, still, it suggests a substantial indication of both bulls and bears market.

As mentioned, the Doji candlestick pattern can differ depending on the position and length of the shadows. Here are the most popular variations: 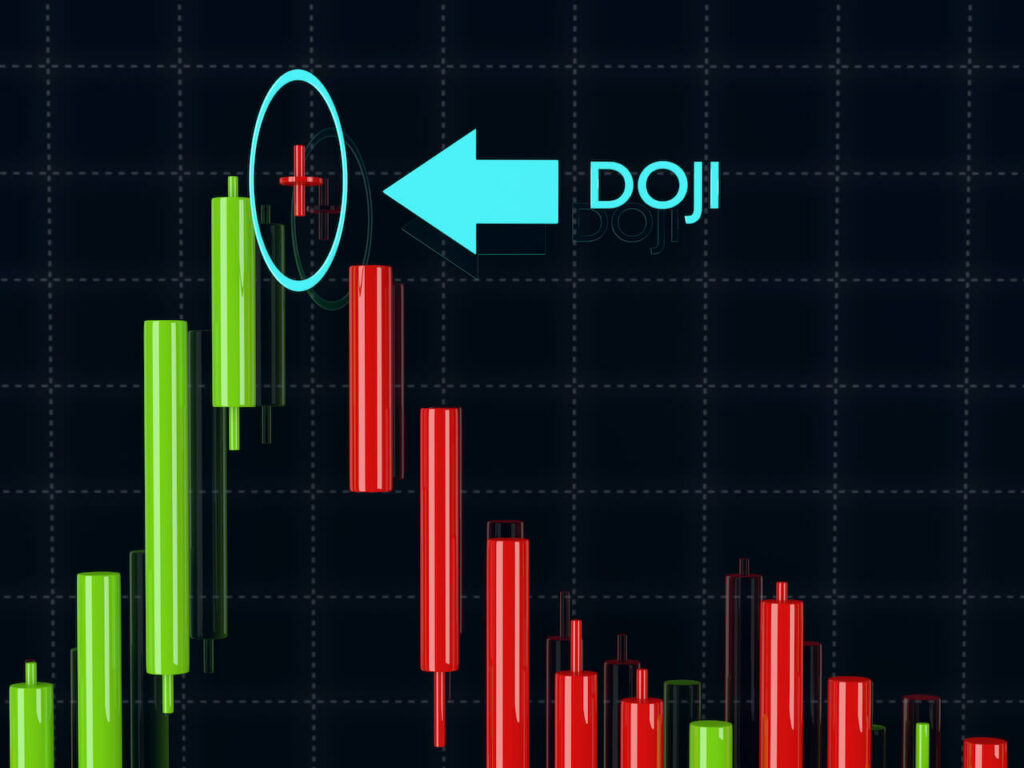 The neutral Doji consists of an almost invisible body positioned in the middle of the candle, i.e., the upper and lower shadows have similar lengths. This pattern shows up when both the bullish and bearish sentiments are balanced.

However, it doesn’t provide any specific signal when used separately. Usually, traders consider it a trend continuation pattern, but reversals might also occur quite often after it. If the neutral Doji comes after a strong bullish candle, investors will interpret it as a buy signal.

Also, if a bullish candlestick shows up above Doji’s high and has a higher low than the Doji’s low, it can be interpreted as a buy signal. Vice versa is valid for the bearish signal.

Long-legged Doji has longer shadows. It suggests that both buyers and sellers tried hard to take control over the price action at some point during the period covered by the candle, though there was no winner in the end.

On the contrary, if the closing price is right in the middle, it can be considered a trend continuation pattern. Hence, so you should always check the previous candles.

The Dragonfly Doji has a long lower shadow and a non-existent upper shadow. It means that the open, close, and high are all at the same level. Thus, resulting in a T-shaped candle.

If such a pattern shows up at the bottom of a downtrend, it can be regarded as a buy signal. However, if the price action breaks above the high, traders can open a long position. However, if the Dragonfly Doji forms near the resistance level, traders can exit positions as it is considered a reversal pattern. 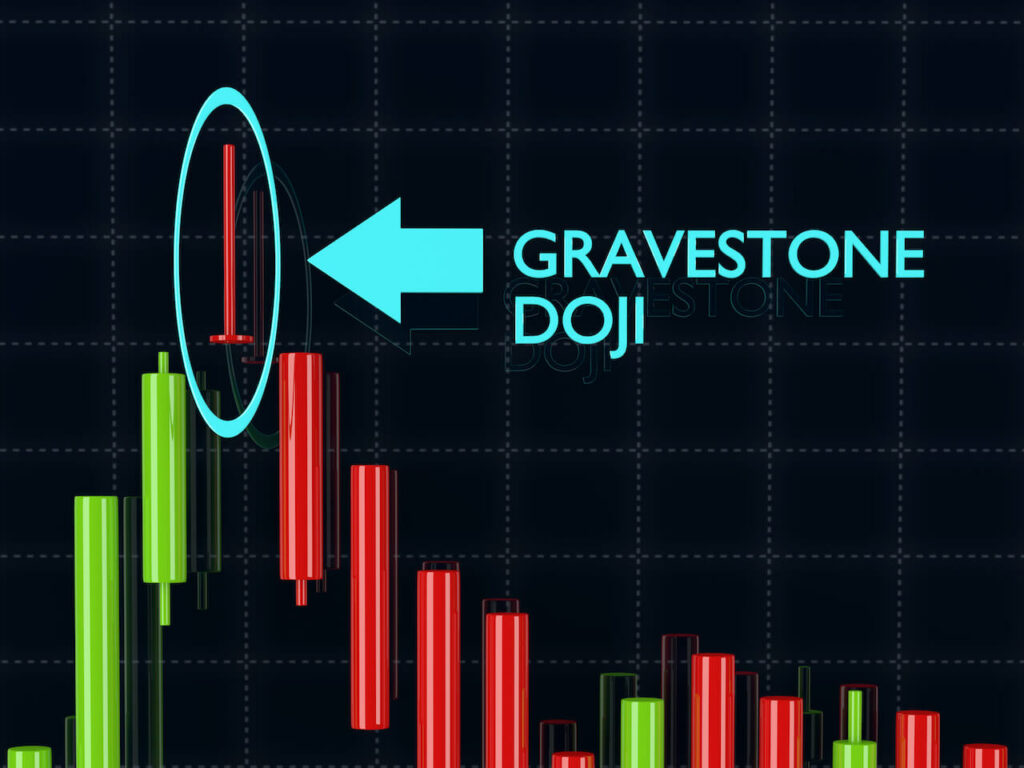 As opposed to Dragonfly Doji, Gravestone Doji’s open and close prices coincide with the low. Thus, we get an inverted ‘T’. It suggests that the bulls may push the price up but ultimately failed to sustain the bullish momentum.

When the Gravestone Doji shows up during an uptrend, it can be regarded as a reversal pattern, especially when seen near a relevant resistance level. Alternatively, it can act as a bullish reversal signal when it appears during a downtrend near a support level.

The 4 Price Doji is a unique pattern that can be observed rarely, especially during low-volume trading or on smaller timeframes. It resembles a minus-like line, which suggests that all the four price indicators, including high, low, open, and close, were at the same level in a given period.

In other words, the market didn’t move at all during the covered period. This type of Doji is not a reliable pattern and can be ignored. It merely shows a moment of market indecision.

A single Doji is regarded as a good signal of indecision. However, two consecutive Dojis represent an even greater pattern that can lead to a strong breakout. There is a simple Double Doji strategy that aims to benefit from this more prolonged indecision.

After the two Dojis, traders can wait for the price to move higher or lower. Then enter the market in the breakout direction. While the take profit targets can be set near a recent support or resistance level. Alternatively, you can place a trailing stop, as the new move might continue even beyond the current support or resistance.

Doji and hammer candle might look similar because they both run into the shadows and short bodies. However, a hammer candle is with a long lower shadow that is almost twice the size of a real body.

While Doji can be seen at any point. The same is true about the difference between Doji and the Shooting Star, which is an inverted hammer and thus a bearish reversal signal.

How to Trade with Doji Candlestick

Given that there are several types of Doji candlesticks, there are different ways to trade them. However, in most cases, you should use additional indicators, such as momentum indicators to confirm the suggestions Doji is signaling.

Here is an example of a trade using a neutral Doji: 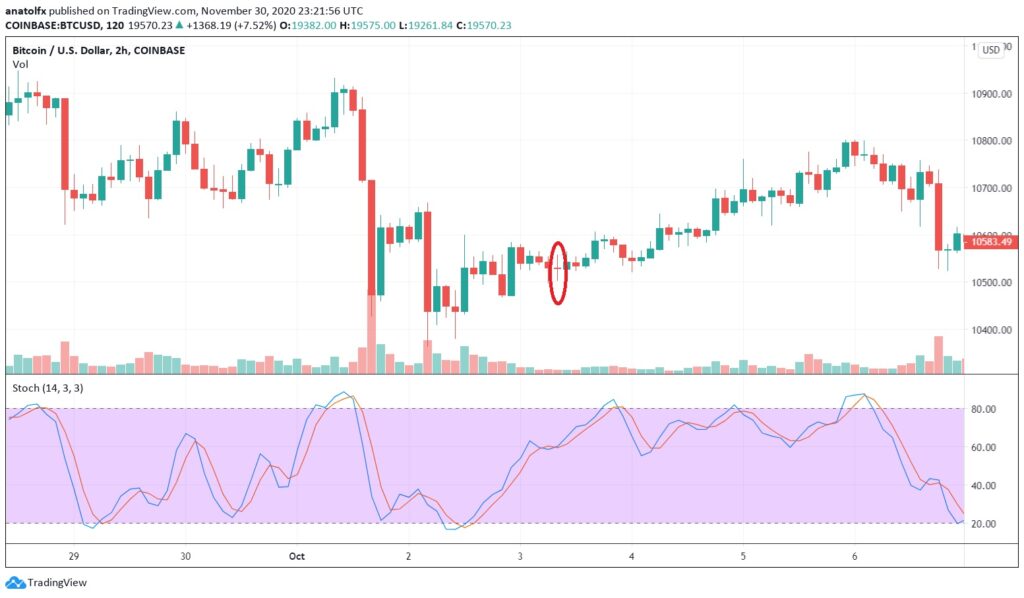 As you can see, the Doji candlestick formed after a temporary correction within a newly formed uptrend. The question is — will the upward movement continue, or will the price turn bearish? To obtain a more accurate picture, we checked the Stochastic. It indicates that there’s more room for growth, as the price action is not even close to the overbought level. Indeed, the price eventually maintained a general uptrend.

So, when you see that the Doji candlestick forms at the bottom of a downtrend or near an uptrend’s resistance, you should always check the Stochastic or the RSI indicator to get a better signal.

Ultimately, the best way to trade the Doji is to wait for the next candlestick to break above its high or below its low. Assess the indications, then only make a final decision about opening a position or closing one.

Trading With Dragonfly and Gravestone Doji

Here is an example of a trade based on the Dragonfly Doji:

In the image above, the Dragonfly Doji formed after a steep bearish decline. This type of Doji anticipates a trend reversal, and this happened in our example as well. Moreover, the Stochastic reached the oversold level after the bearish candle, which suggested that the Dragonfly was even more relevant. Eventually, the price started to move upwards very slowly, and then the pace increased.

When the price moves higher for a while, the chart can form a Gravestone pattern. Which is an inverted Dragonfly Doji that precedes the reversal of an uptrend.

The Risks of Using Doji Candlestick

Relying on Doji alone is not a good idea because this type of candle is relatively neutral in most cases. Plus, a trader might risk missing out on crucial information before making a trade. That’s mainly because the Doji candlestick pattern relates only to the price information it provides.

Moreover, finding a Doji candle is not that easy, as these formations don’t appear quite frequently. Even when they show up, you should combine them with technical analysis and indicators to get a more accurate signal because Doji alone doesn’t provide strong signals.

In conclusion, the Doji candlestick is not the best pattern to provide strong buy and sell signals. But it does a great job at finding moments of indecision among bulls and bears, which highlights the open positions or potential opportunities.

It is more suitable for intermediate and professional crypto traders since they can easily spot them and interpret their signals.