Dragonfly Doji Candlestick: What Does It Mean? 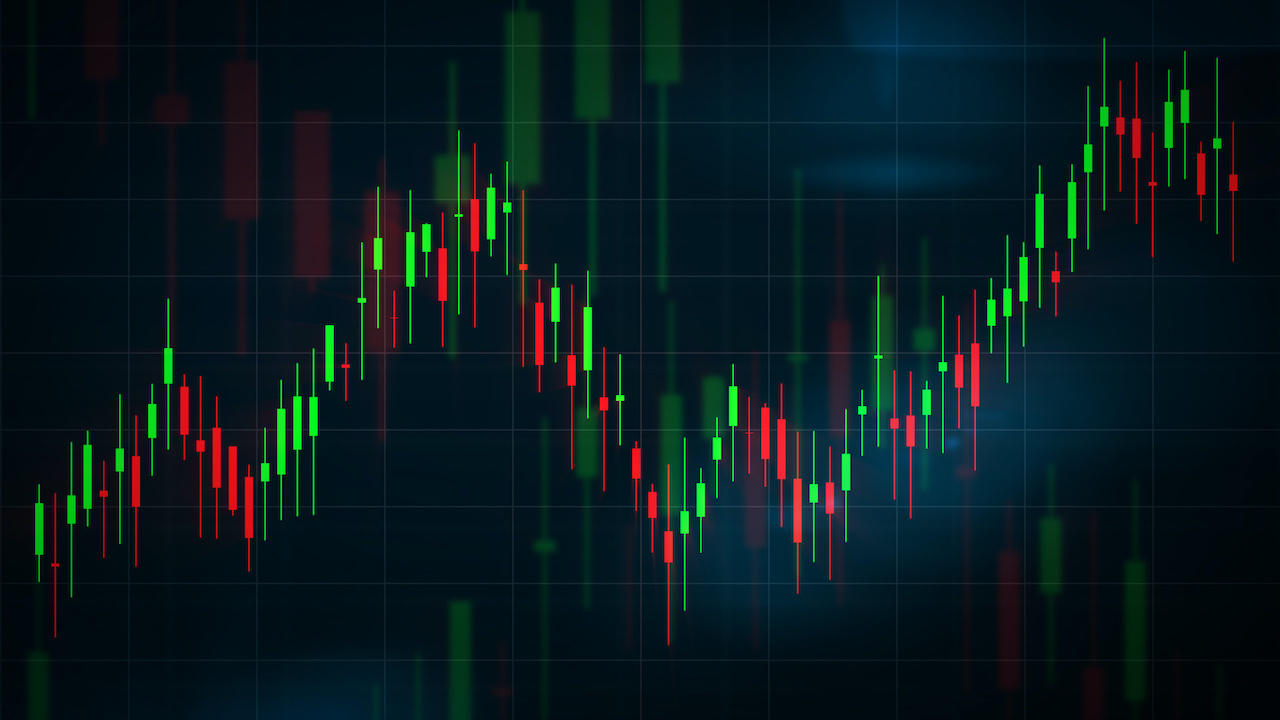 The Dragonfly Doji is regarded as a reversal pattern that shows up at the bottom of downtrends and anticipates a rebound or a rally. The ideal Dragonfly should have an invisible body and a long lower shadow. Thus, the pattern indicates that the open, high, and close prices are relatively at the same level.

When analyzing the chart, all traders can quickly determine a Dragonfly as it represents a T-shaped pattern. It has a very long lower shadow, while the open, close, and high tend to be at the same level. However, the ideal Dragonflies are quite rare. But the primary condition is that the open and close should be very close to each other, while the high must coincide with the close or at least draw a very short upper shadow. Here is what the pattern looks like on the chart:

As a rule, the Dragonfly Doji is normally at the bottom of downtrends, though there are exceptions. If it shows up at the top of an uptrend, it doesn’t necessarily suggest a bullish or bearish signal. That’s because the next few candles usually decide the subsequent price move.

How Does a Dragonfly Doji Form?

The Dragonfly Doji shows up when the price tumbles to a certain point but then returns to the open of a given period, regardless of whether you’re trading on the H1, H4, D1 timeframes any other chart. The pattern forms when bears are actively pushing the price downwards. But they’re losing strength and let bulls take control to the point when the latter are buoying the price back to the open levels.

The bears encounter strong support when the Dragonfly touches its low, and the buying pressure helps the price bounce back. That means an existing downtrend is not backed by the general sentiment anymore, and a potential uptrend is on the horizon.

Shortly after a Dragonfly candle, traders would usually open long positions or close their existing shorts. The pattern is excellent at determining the support level, which can be tested repeatedly when the price is losing strength again.

When the Dragonfly Doji appears at the top of an uptrend, it can still be a bullish signal that points to a trend continuation. But, it is not a rule. In this case, bears attempted to reverse the bullish move, while the price is likely to carry on with its bullish movement if unsuccessful.

How to Trade With the Dragonfly Doji?

Although Dragonfly Doji is commonly used for stock trading, trading crypto with Dragonfly is not as hard. If you observe the Dragonfly Doji at the bottom of a downtrend, you can interpret it as a strong buy signal. However, when the pattern shows up in other circumstances, it merely suggests a local price rejection.

Most strategies involving the Dragonfly Doji require the pattern to form at the bottom of a bearish move. When this primary condition is met, traders will try to find the right moment to open a long position, anticipating a trend reversal. Elsewhere, those who have active short positions would seek to close them.

Even though the Dragonfly Doji provides a relatively accurate signal, it is imperative to glance at several technical indicators, such as the moving averages and one of the oscillators, be it Stochastic or the Relative Strength Index (RSI). The momentum indicators will confirm whether the price has entered the oversold level and is ready to rebound.

Besides the mentioned indicators, traders would prefer to open positions amid higher volume, boosting the reliability of the Dragonfly Doji.

Another critical aspect that you should consider is the lower shadow’s size – the longer it is, the more relevant the bullish signal is.

Trading at the Bottom of a Downtrend

Trading the Dragonfly pattern at the bottom of a downtrend is the main scenario. So, it would be best if you were more interested in entering the market when this condition is met in the first place. If you observe a Dragonfly showing up following a bearish move, be prepared for a trend reversal.

However, don’t rush to go long right after the candle closes, as the bears might repeatedly try to break the newly formed support. Instead, it’s a better choice to open the long position after the first candle that closes above the Dragonfly Doji’s high. 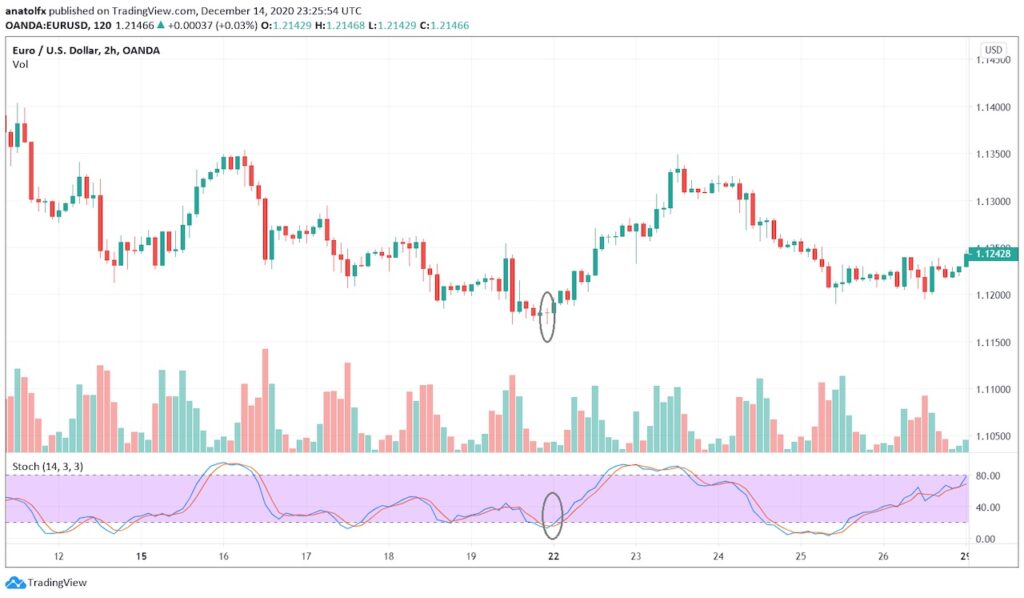 You can set the stop loss of the long position right below the low of the Dragonfly. As for the take profit, traders would set a target that doubles the size of the pattern. If you are afraid to miss the chance for greater profits, you can set a trailing take profit to benefit from a potential longer-term rally.

Make sure to check one of the oscillators, whether you’re comfortable with the RSI or Stochastic. If the price is in the oversold zone (below 70% for the RSI or below 80% for Stochastic), then the Dragonfly Doji signal is even stronger. The signal shows that it’s more relevant when the volume is high.

In the example below, we have a Dragonfly pattern that is not perfect but comes at the bottom of a bearish move and coincides with Stochastic’s oversold level. Indeed, it anticipated a trend reversal.

Trading at the Top of an Uptrend

On rare occasions, the Dragonfly Doji might form in a bullish market. If this happens, it doesn’t make sense to get ready for a trend reversal. Mainly because the pattern may end up with the continuation of the uptrend. In this case, the Dragonfly may demonstrate the bullish move has recovered its previous rhythm and may go on for a while. You can open a long position providing that the next candle closes higher than the Dragonfly, while other technical indicators also favor a bullish move. Still, the Dragonfly is a weak signal in this case, and most traders would choose not to enter the market at all. 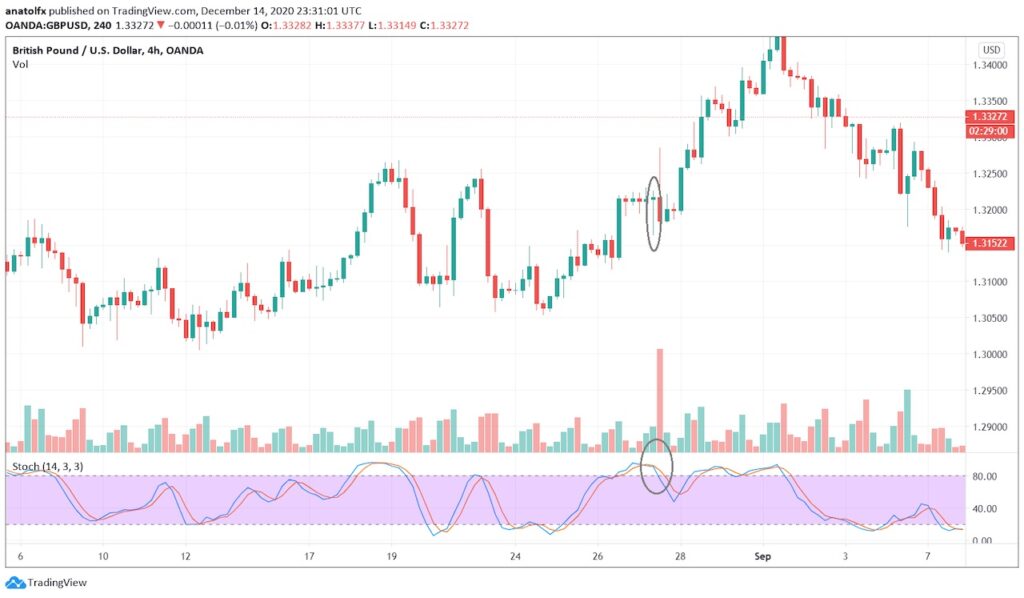 For example, the trading pairs were in the middle of an uptrend, with the Stochastic pointing to the overbought level. The conditions for a trend reversal were there. But the uptrend continued after a wild fluctuation when the Dragonfly came out. After the Dragonfly, bears have tried a reversal indeed, but bulls came back stronger. It would help if you opened the long position after the first candle closes above the Dragonfly in cases like this.

The Constraints of a Dragonfly Doji

The Dragonfly Doji is widely used as a bullish signal. But few traders would risk opening positions based on the pattern alone. That is because the Dragonfly is a weaker signal than a combination of technical indicators. Here are the main limitations of the patterns you should take into account:

So, to improve the accuracy of a Dragonfly signal, it is imperative to use other technical indicators. At least one oscillator can do the trick.

The Dragonfly is part of the category of candlestick patterns— Doji candlestick. So, naturally, it shares similarities with other Dojis or even patterns outside the Doji group. Thus, it is essential to understand how to differentiate the Dragonfly from others, as the signals may be different. Some examples of similar patterns to the Dragonfly Doji are the Pin Bar, aka the Hammer, and the Hanging Man. 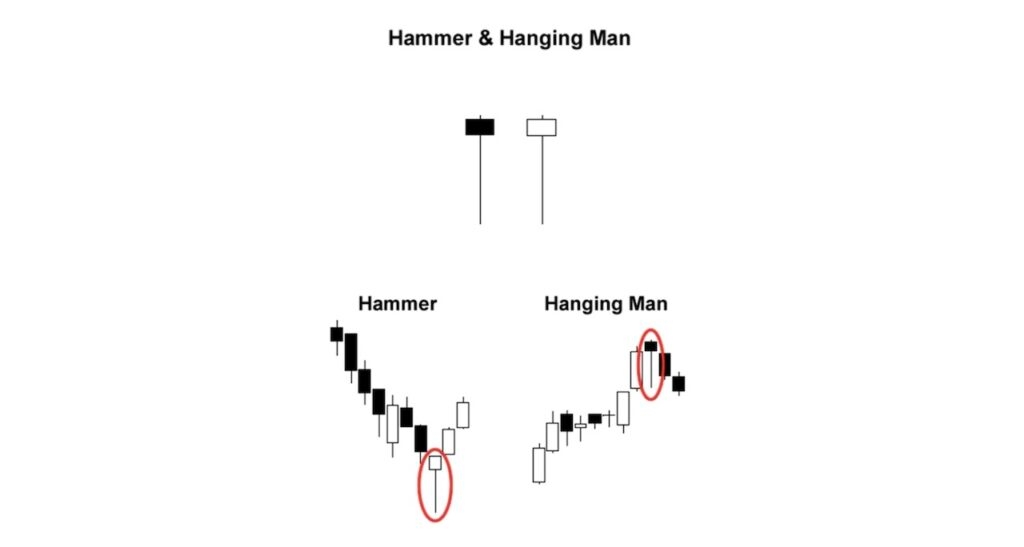 Dragonfly vs. Hanging Man vs. Hammer

It would be best if you were careful not to confuse the Dragonfly with the Hammer, which looks similar but has a larger body. Still, they both anticipate bullish reversals, so it won’t be a problem if you confound them.

The Hanging Man also has a short body and a long lower shadow. However, unlike the Hammer, it forms in bullish markets and anticipates a bearish reversal. Thus, it is vital not to confuse the Hanging Man with the Dragonfly Doji because they may provide different signals, as the latter suggests the continuation of an uptrend. If the body of the candle is visible, the chances are that it is not a Dragonfly.

To recap, the Dragonfly Doji is a decent bullish reversal pattern. But it is recommended to use it along with technical indicators. Also, it makes sense to trade when this pattern shows up at the bottom of the downtrends.