What Are Triple Top and Bottom Patterns in Crypto Trading? 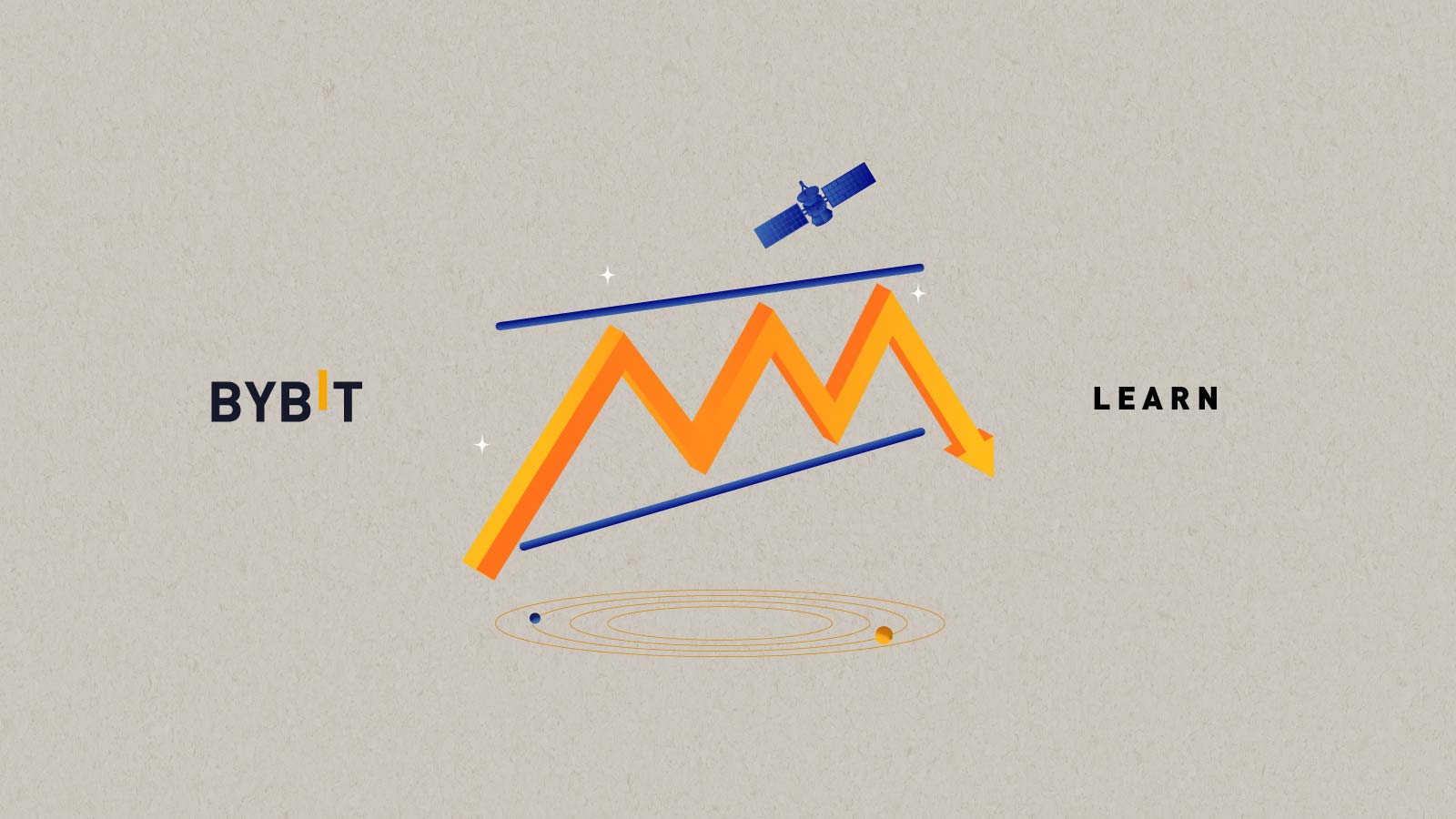 The triple top and triple bottom patterns are rare but powerful formations that signal a reversal in trend. They’re useful in crypto trading, as the triple bottom could be the kickoff to a new bullish trend while the bearish triple top could signal a near-term correction. However, it is unlikely to spot a perfect triple top or bottom pattern where the horizontal resistance and neckline are parallel to one another. The rarity of these patterns is what makes them powerful.

The ingredients to spotting a triple pattern are simple and, once observed, can be easily utilized as a source of technical analysis to formulate a trading strategy. We’ll review the triple top and bottom patterns and discuss how to generate a trade idea once you spot these chart patterns.

What Is the Triple Bottom Pattern?

A triple bottom is a chart pattern that occurs at the end of a downtrend. It is a bullish candlestick pattern that consists of three failed attempts at new lows near the same price and is confirmed once the price breaks higher above resistance.

The triple bottom pattern forms after prices have been correcting lower. The crypto market begins to rebound but fails to follow through to the upside. Additionally, each failed rebound is met with a failed attempt at new lows, and the market trades in a sideways range. Sellers become completely exhausted, and the market rebounds a third time, but with enough energy to break out higher. 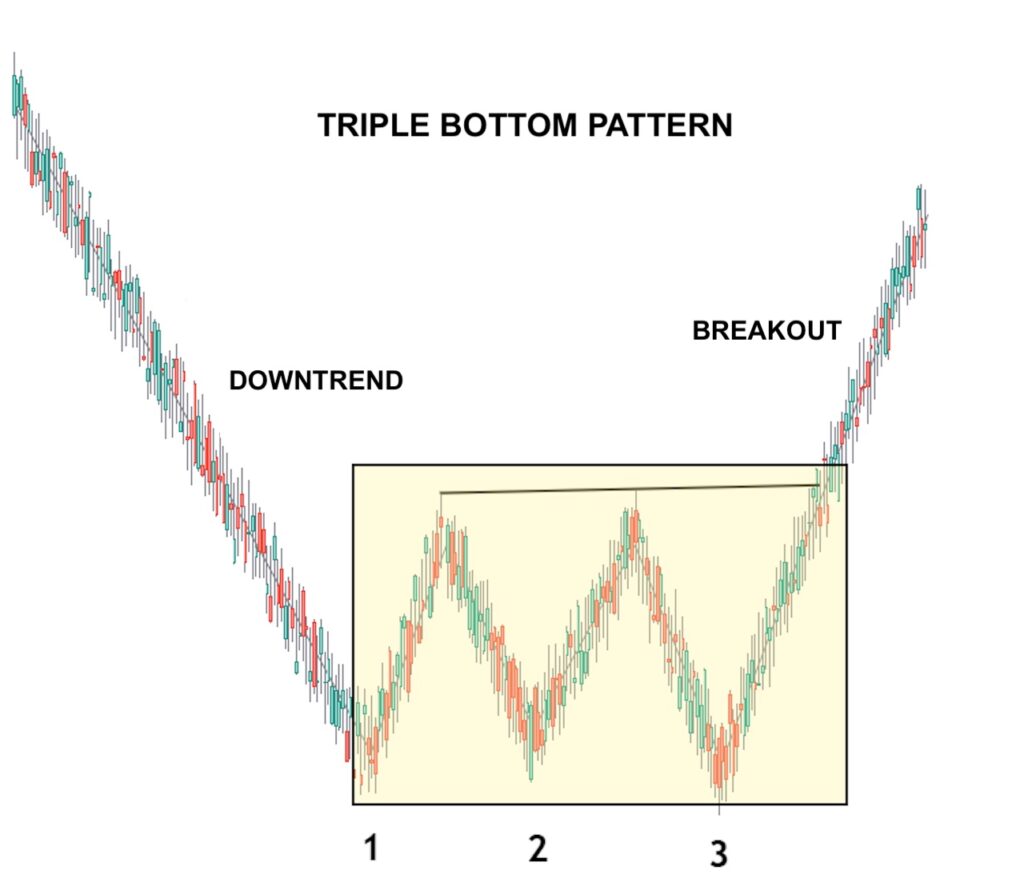 The pattern looks like the letter “W” as the lows of the pattern form near the same price level. Some traders would suggest the pattern takes the shape of a rectangle as well. Both interpretations are valid, as the pattern is a bullish reversal setup.

Patterns like the hammer candlestick or bullish engulfing are other examples of bullish reversal patterns.

Patterns like the bearish engulfing or rising wedge formation are examples of bearish reversals.

What Does the Triple Bottom Pattern Represent?

This is useful for long-term HODLers, as the pattern’s confirmation represents another opportunity to add to your bullish position. The triple bottom pattern can also be used as an exit signal for those traders who want to short the market.

The reliability of the triple bottom will depend on how close the actual pattern conforms relative to the idealized one. If the actual market carves close to an idealized pattern, then the results are fairly reliable.

What Is the Triple Top Pattern?

The triple top is a bearish chart pattern that tests the high of a price three times before the price falls and breaks to new lows. As opposed to the triple bottom, it appears at the end of an uptrend suggesting a likelihood of trend change. 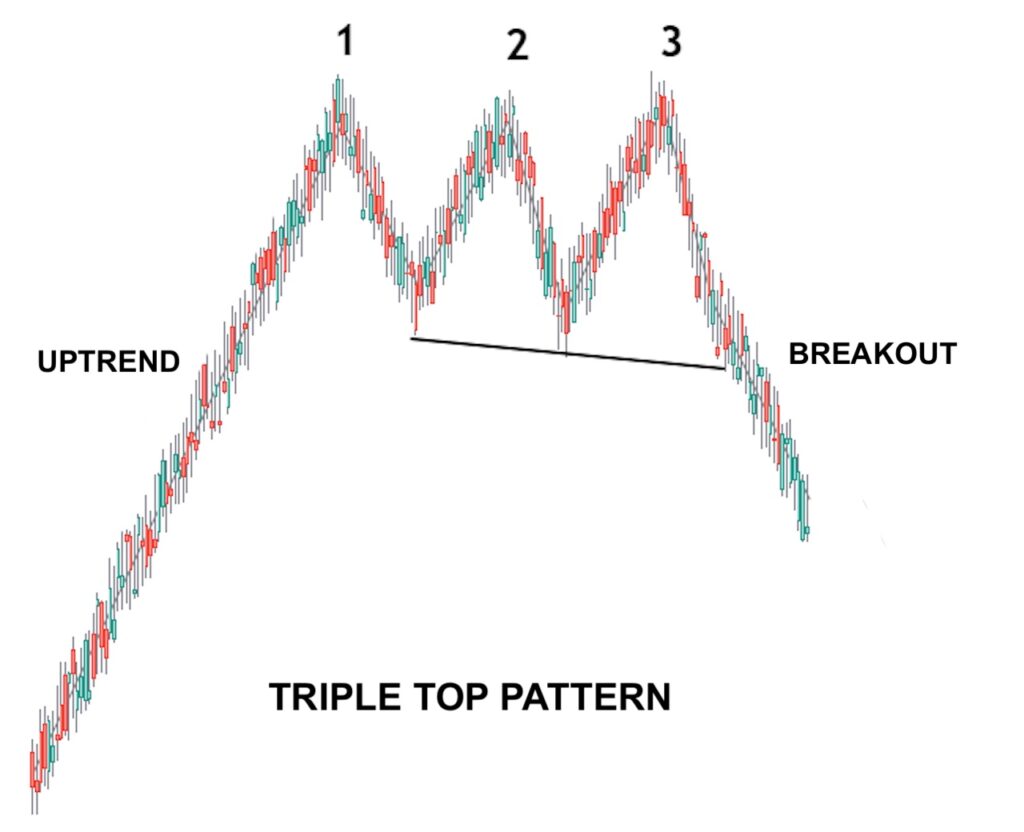 The triple top chart pattern forms after a sustained rally. The buyers and whales are no longer supporting the rally, and sellers are pushing prices down. However, sellers aren’t strong enough to create a new downtrend initially.

A dramatic bull-versus-bear battle takes place, as each short correction is met with another rally that fails near the old highs. Eventually, the bulls are exhausted and the crypto market begins its correction, breaking below the recent support.

The triple top pattern looks similar to the letter “M,” except that there are three failed attempts at new highs that are close to one another, creating three peaks. 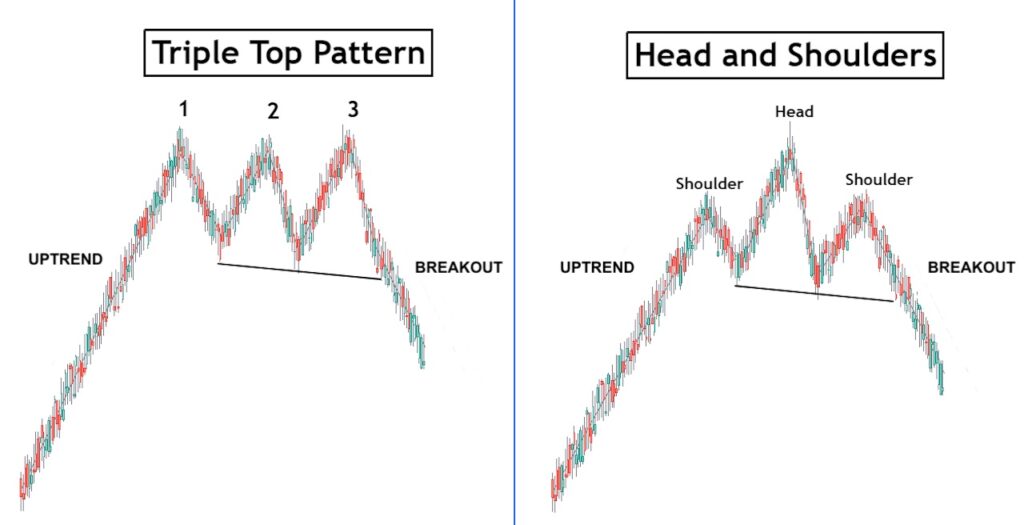 The results of both the triple top and head and shoulders patterns are similar, as each pattern implies a break below the support as a new downtrend is created.

The triple top pattern is quite useful for bullish traders, as the bearish pattern signals a potential deep correction is coming. This allows bullish traders to adjust their stop-loss and deploy their risk management strategy or close out a portion of their position to lock in profits.

Since the triple top is a bearish reversal chart pattern, bearish traders may use the pattern as a signal to enter the crypto market as a short seller. This would allow a trader to profit if the price were to move lower as intended.

Triple top patterns can appear on any chart time frame, but they must form after an uptrend. To identify a triple top, look for a large rally that’s topped with three failed attempts at new highs.

The three failed attempts at new highs should print near the same price. If they deviate significantly in price from one another, then there’s likely another pattern forming that’s different from the triple top.

Let’s look at a specific example. In the Bitcoin 15-minute chart below, BTC rallies 9% from $42,100 to $45,876 in a matter of minutes. This rally forms the uptrend and the beginning of the triple top pattern. 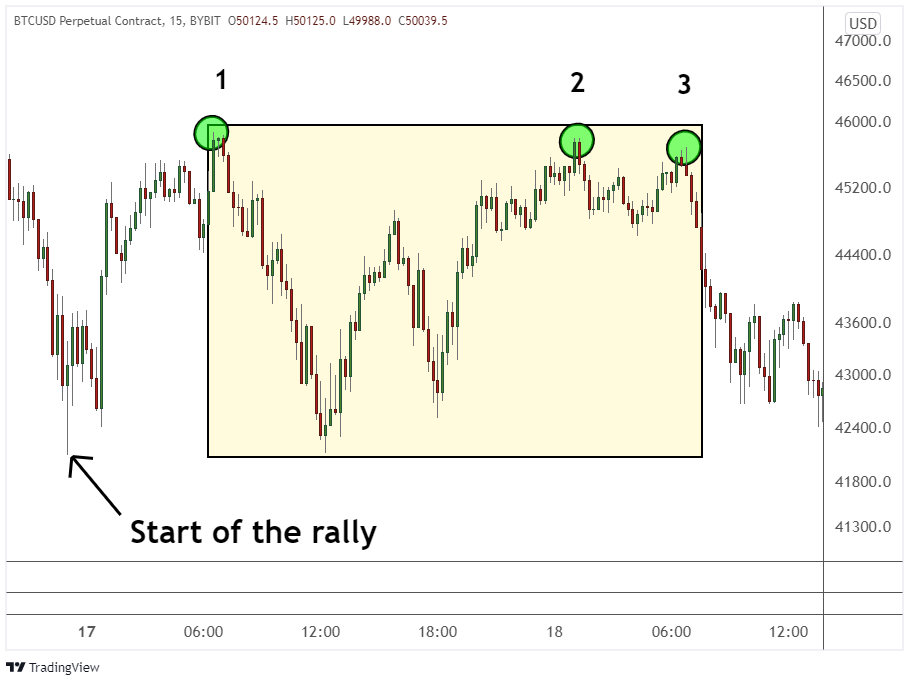 After finding a bottom at $44,628, a third rally attempt starts, carrying to $45,694 before failing and reversing lower.

Using the Bitcoin daily chart time frame as another example, three failed attempts to new lows occur between May and July 2021. 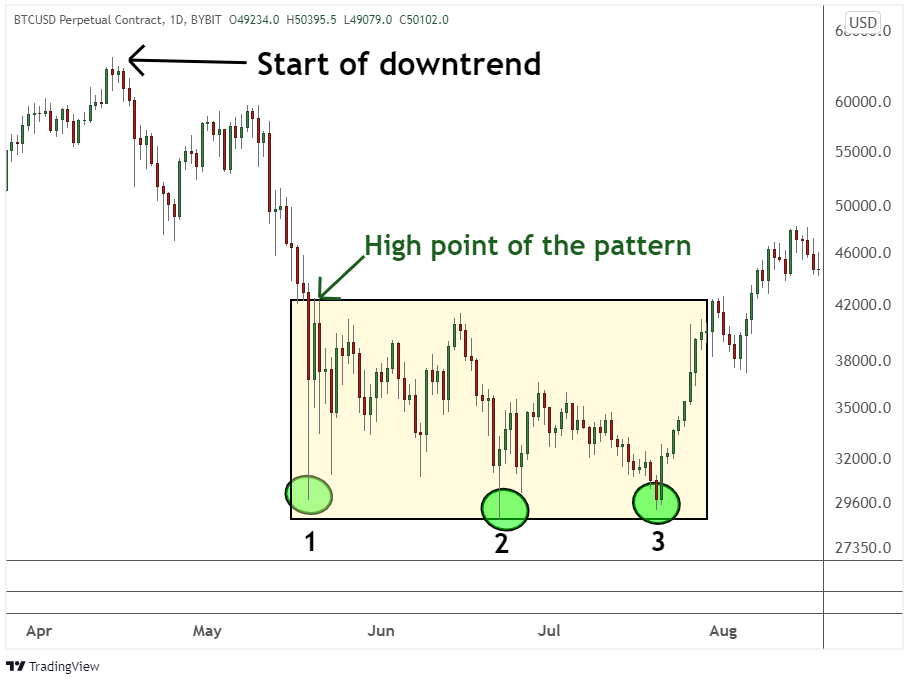 On April 14, 2021, Bitcoin began a large and swift correction that found its first support at $29,800. This low forms the first failed attempt of lower lows in the triple bottom pattern.

After rallying for a bit, another attempt at a breakdown fails at $29,258. This last low becomes the final low of the triple bottom pattern. From this low, Bitcoin aggressively rallies to new highs above the high of the pattern at $42,444.

What Happens After a Triple Bottom Pattern?

After the three low points of a triple bottom have formed, anticipate a bullish reversal to break out to new price highs. To confirm the breakout higher, first identify the high point of the triple bottom pattern. 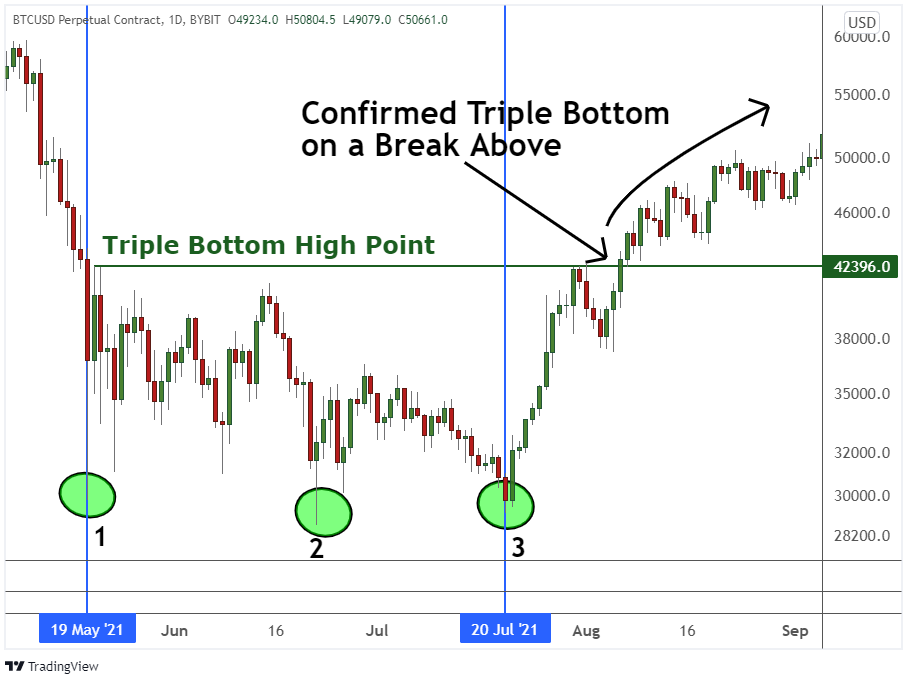 The sustained break above this high price point will alert the bullish trader the reversal is underway — and even higher prices are likely coming. This confirmation isn’t 100% foolproof, but it does provide a level of reliability that traders can count on to make higher probability trades.

Other confirming factors can help support the case for a bullish break, such as increasing volume on the upside movement, or expanding ranges of the bullish candles.

These conditions don’t necessarily have to be present for a bullish breakout to succeed. However, their presence further confirms the likelihood of follow-through on the breakout.

What Happens After a Triple Top Pattern?

To confidently identify the triple top pattern’s low point, mark a vertical line at high points (1 and 3 in the illustration below). Then, identify the lowest price on the chart between the two vertical lines. Mark a horizontal line at the lowest price point identified. Make sure this line extends to the right. This triple top low point will become the price level where we can confirm the pattern and its break downward in a new correction. 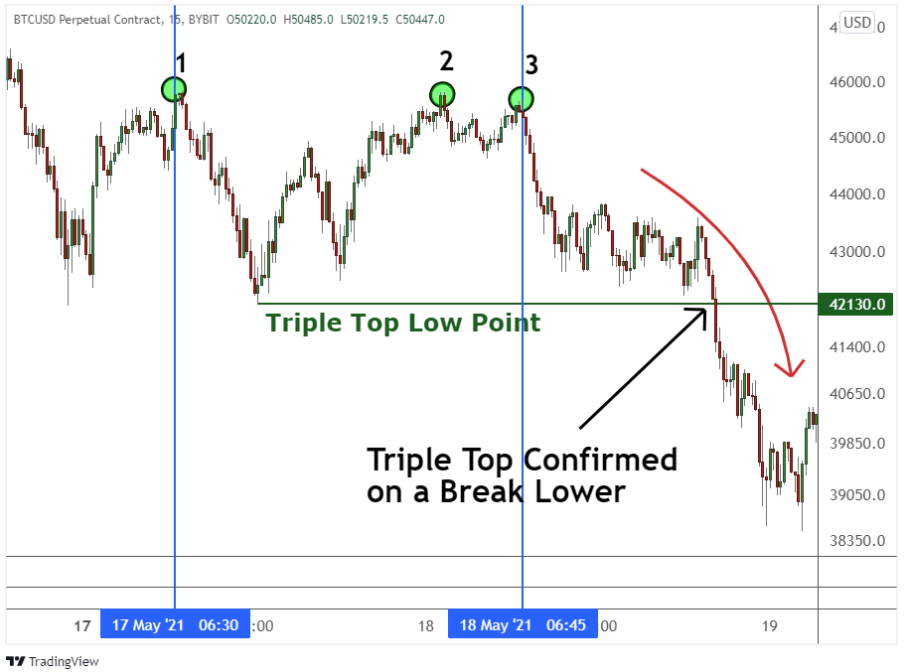 In the Bitcoin chart above, after failing at these three highs the largest cryptocurrency starts a more robust downtrend. This pattern is confirmed when we see a new low below the low of the triple top pattern. The lowest price between the three tops is $42,130.

If the price fails to break below the low point of the triple top pattern, then the triple top isn’t confirmed. Failure to confirm a break lower suggests that there’s another pattern carving — and that you should avoid selling short.

How to Trade with the Triple Bottom Pattern

Once the three extreme price points of the pattern are discovered, confirming and trading the pattern is fairly straightforward.

During the summer of 2021, Ether (ETH) was correcting lower to consolidate previous gains. Standing back and looking at the daily chart, you can easily identify three low points forming near the same price level. 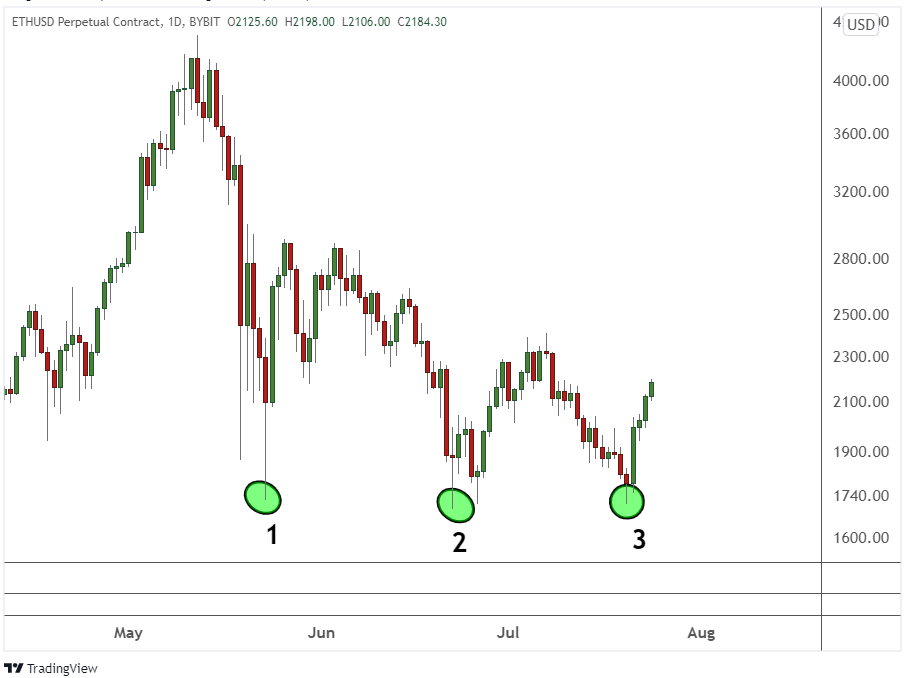 Now, it’s time to set up the entry for the triple bottom pattern. To do so, we need confirmation first. The triple bottom is confirmed once price breaks above the high point of the pattern. 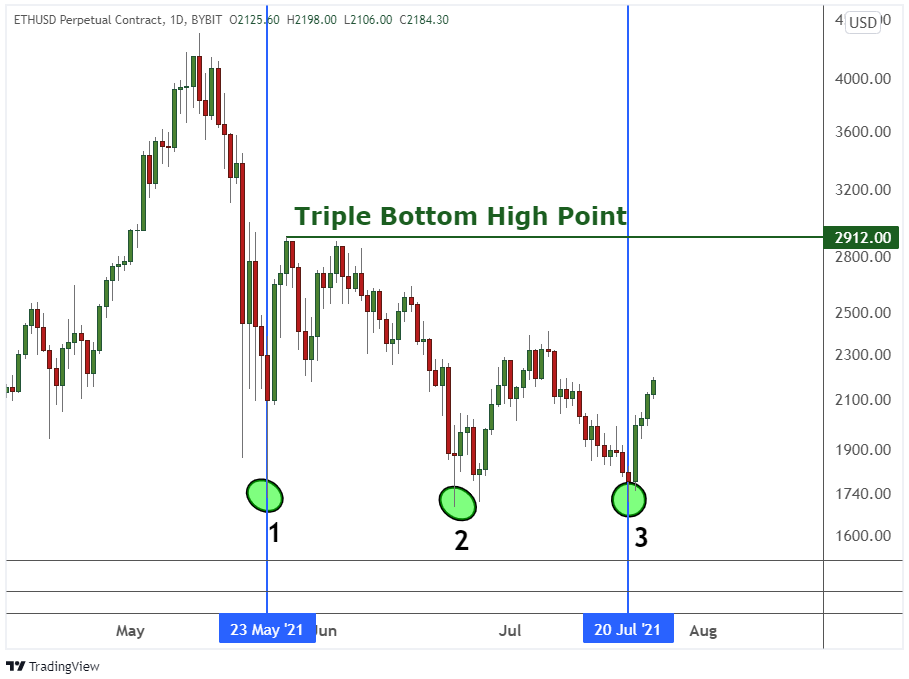 Since the triple bottom is a bullish reversal pattern, we’ll establish a long position at the breaking point. This means we want to go long at $2,912. 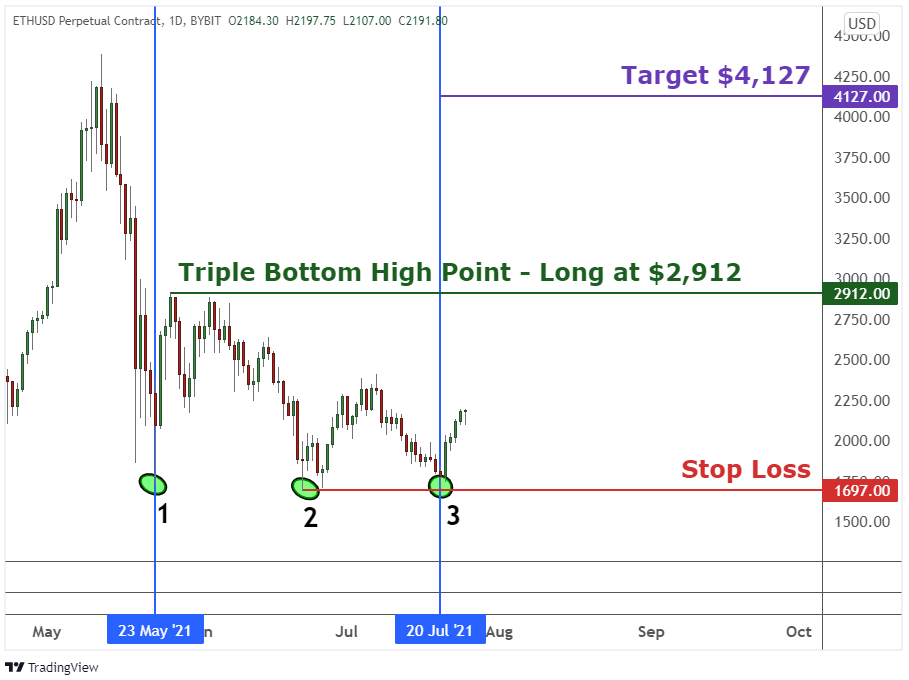 On a confirmed breakout higher, the market generally travels the same distance to the high point as it does to the low point of the triple bottom pattern.

Limitations of the Triple Top and Bottom Patterns

A confirmed triple top or bottom pattern can be reliable, but neither one can be 100% accurate.

A challenge that inexperienced traders may face is impatience. Beginners may see three failures near the same level and open their position accordingly. The limitation of such a decision is that the pattern hasn’t been confirmed. Entering into the position prematurely opens the door to a failed pattern — and a losing trade in the account.

Additionally, a trend direction tends to follow volume. If a breakout is occurring on a lack of volume, then it may fail. On the other hand, a breakout occurring on increased volume benefits the break and suggests we may see follow-through to the target.

Due to these limitations, a trader needs to implement a stop loss on every trade to ensure the account isn’t destroyed, should the market move against them.

The triple top pattern is a bearish reversal formation that can alert traders to an upcoming correction. Additionally, the triple bottom pattern can signal the kickoff to a new bull rally.

The triple top and bottom patterns have their limitations, so be mindful to wait until a formation is confirmed when using it to trade with larger market cap cryptocurrencies.