Rising Wedge Pattern: How to Identify a Selling Opportunity 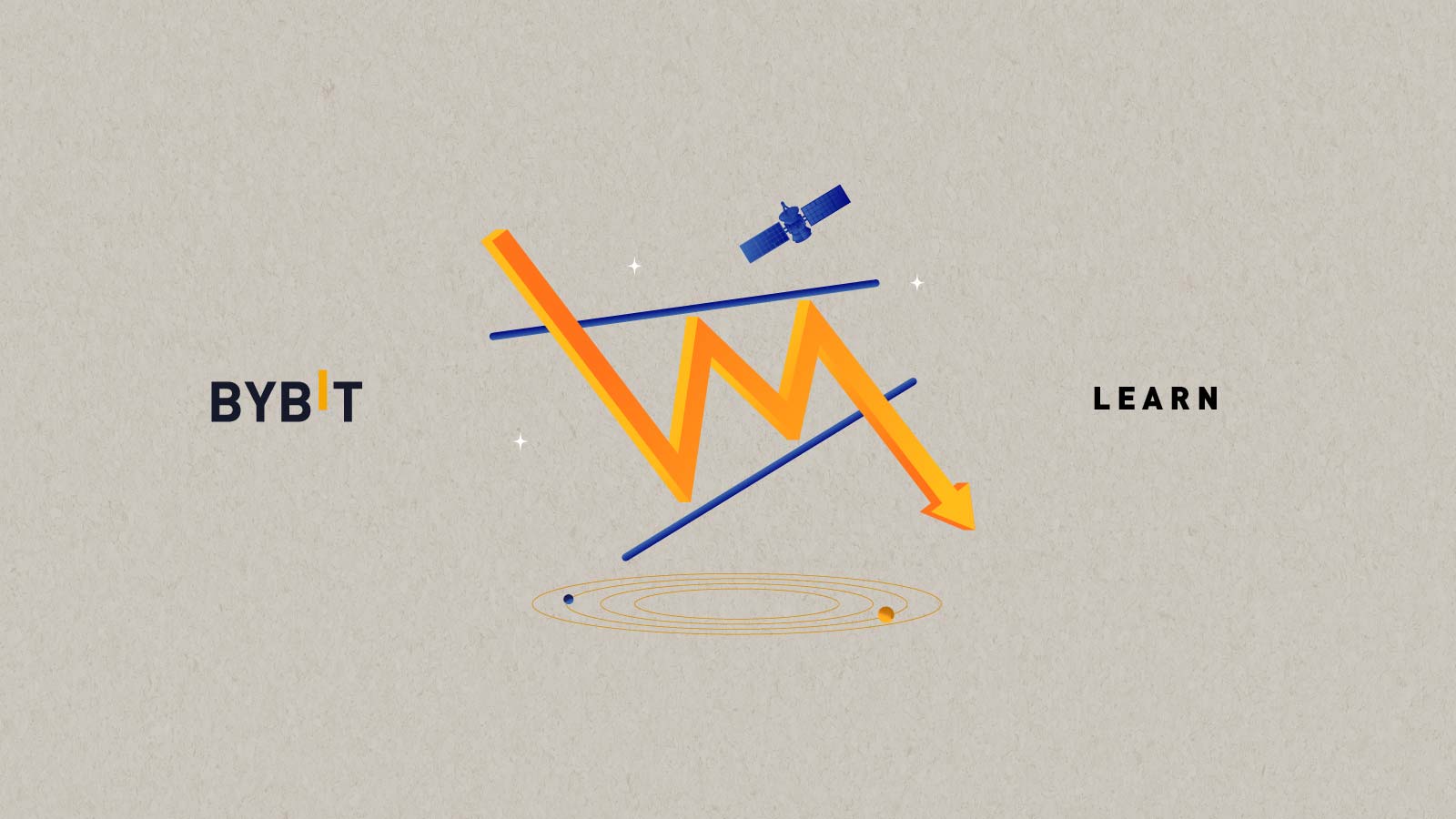 Due to its straightforward entry and exit guidelines, the rising wedge pattern is a favorite chart formation of many technical crypto traders. The rising wedge can alert traders to an upcoming top and reverse prices, as the pattern contains a distinct formation.

The rising wedge carves on all chart time frames and can develop quickly, making it difficult to spot in real-time. We’ll guide you through what the pattern looks like and how to use it for generating sell signals.

What Is a Rising Wedge? 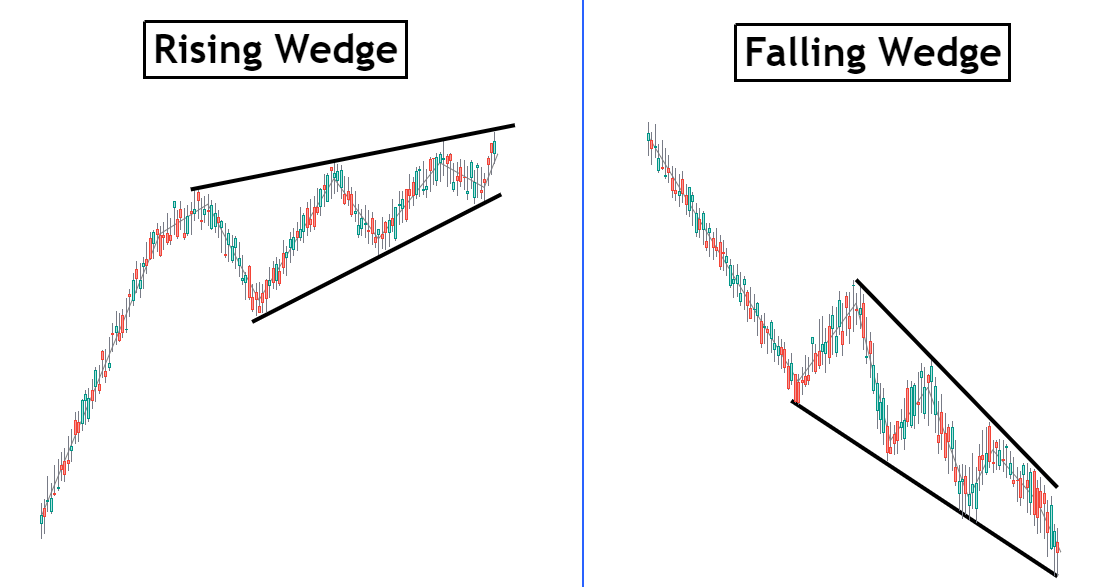 The rising wedge pattern can be interpreted as a bearish wedge as the low is overtaking the high in which the lower supporting trend line is steeper. Though the falling wedges have a similar shape, the only differences being the slope of the triangle and the implied result of the pattern.

The rising wedge (ascending) pattern in which the trading volume decreases as the wedge progresses signals the future falling prices or a breakout to a downtrend, making it a bearish pattern. The decreases in trading volume could suggest that sellers are consolidating their power for a bearish breakout despite the wedge captures the price action moving higher.

On the other hand, the falling wedge (descending) pattern has a negative slope, slanting downward and implying a rally forming nearby, making it a bullish pattern. However, the interesting part is that a rising wedge can occur during a downtrend as a continuation pattern or during an uptrend as a reversal pattern.

The resistance trend line needs to cover the extreme high points of the pattern. A minimum of two higher highs is needed for the resistance line.

The rising wedge pattern is generally observed after long trends, which means it can be quite useful for cryptocurrency trading. For instance, if a crypto trend has moved too far too fast, the wedge pattern may appear as a warning signal of an upcoming trend reversal. 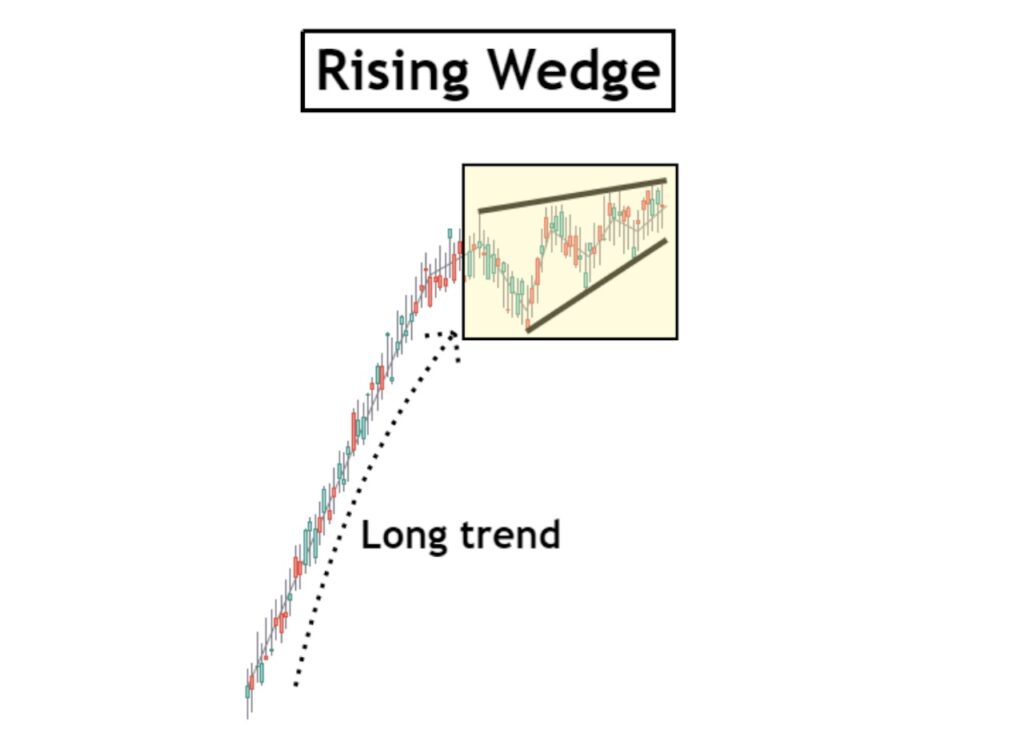 If the higher pricing fails to draw in more sellers, then the price will continue to quickly readjust higher. This swift readjustment creates strong uptrends that begin to attract more buyers, who fear missing out on a powerful trend (known as FOMO, or fear of missing out).

Once this strong trend has developed, and large crypto whales are no longer interested in buying, the price will begin to correct, drawing in the FOMO buyers. Each new high sees another correction, drawing in more buyers.

At this point, the rising wedge pattern has formed and the market is ripe for a large correction.

What Does a Rising Wedge Indicate? 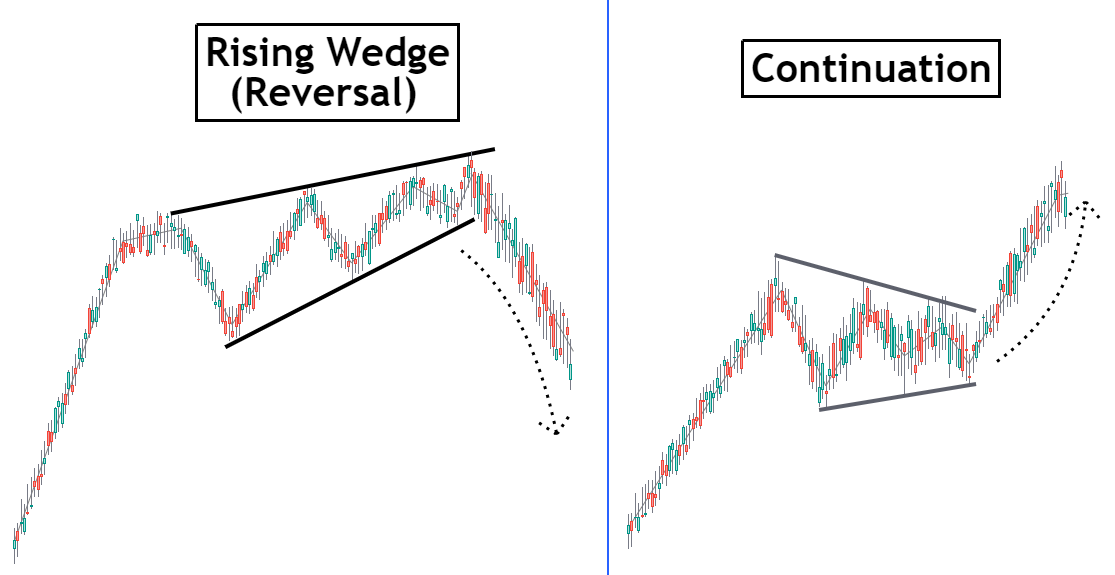 There are some similarities between a wedge pattern and a triangle pattern that may confuse crypto traders. However, there are differences that allow the trader to distinguish one from the other so they can better determine the market’s next path.

As a result, wedges are reversal patterns, while the triangle is a continuation pattern.

What Happens After the Rising Wedge Pattern Appears?

The rising wedge appears at the end of a trend. Therefore, the next move after the ascending wedge pattern forms is a bearish reversal. 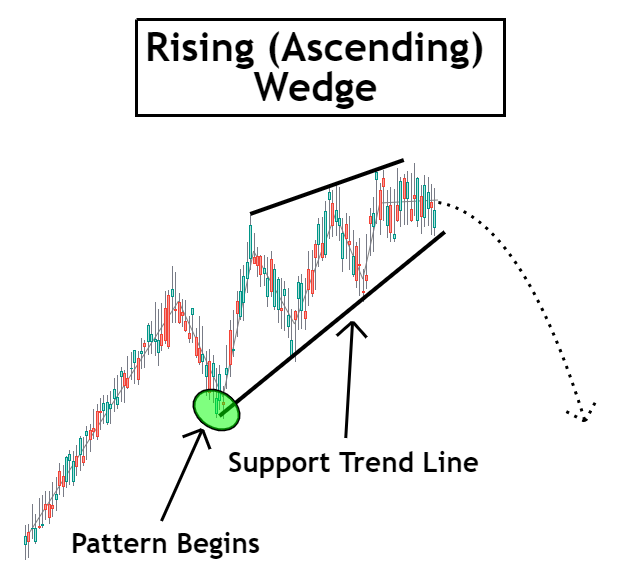 The bearish reversal can be confirmed when the market falls below the support trend line. On many occasions, the market will correct back to the level of the origin of the rising wedge pattern.

Spotting a Rising Wedge Pattern on a Crypto Chart

The rising wedge pattern appears after a long and mature uptrend, signaling a potential reversal. 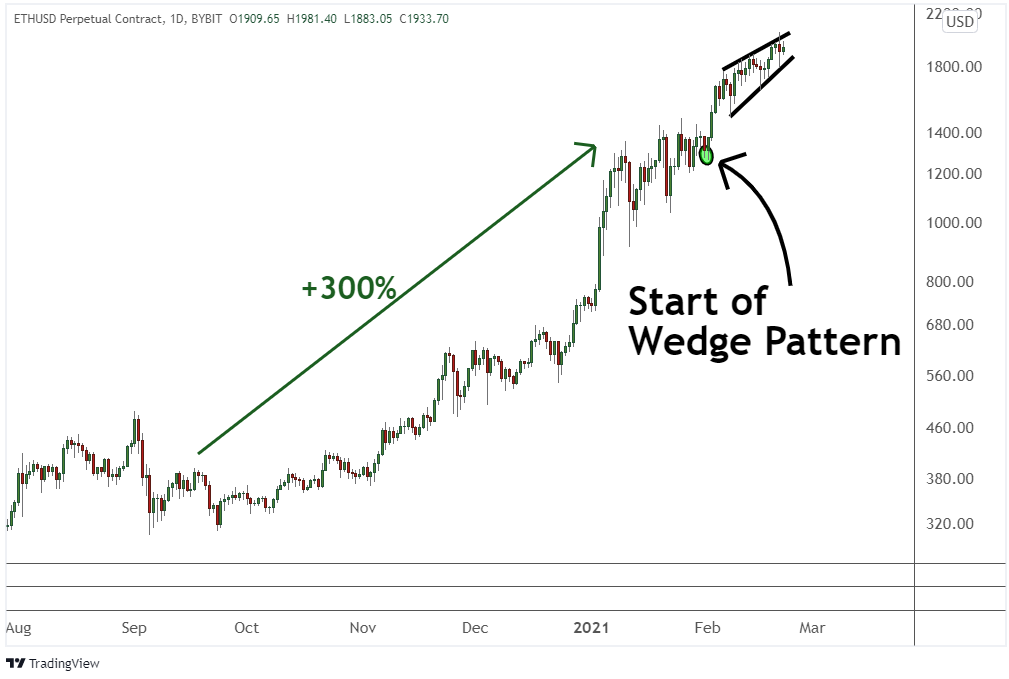 The next example has two illustrations in it. 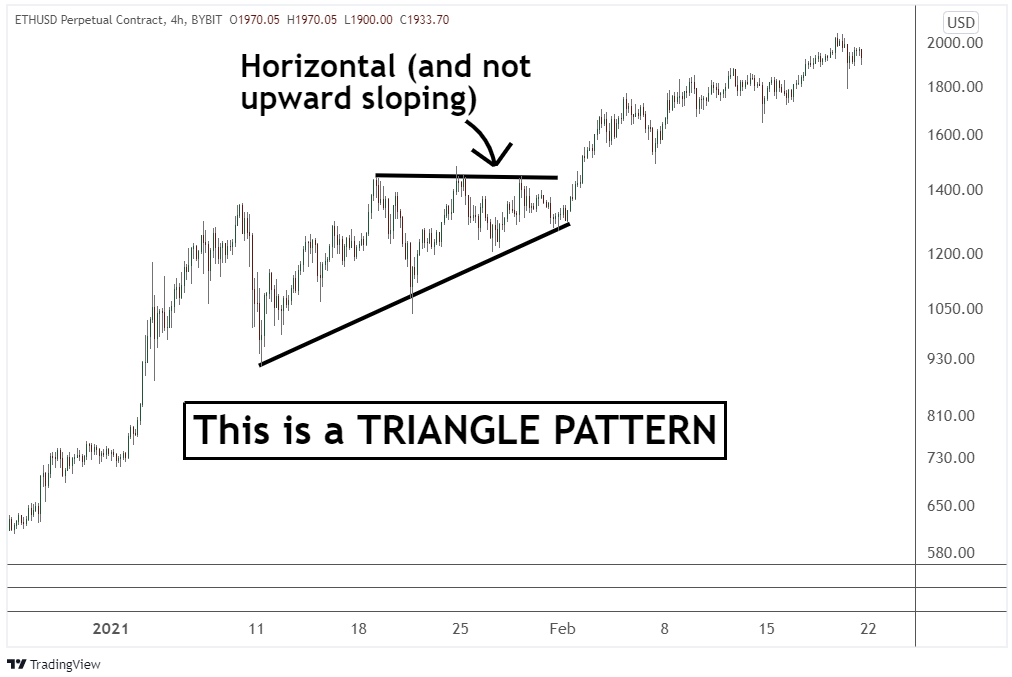 First, notice how the price action turns sideways in late January 2021. This is a triangle pattern with converging horizontal and ascending trend lines. Newer traders might mistake this pattern as a wedge. However, although it looks like a wedge, the resistance line is basically horizontal-to-downward sloping. This is a dead giveaway of a continuation triangle pattern — not a rising wedge.

Once this pattern completes, ETH begins to rally at the start of a rising wedge pattern. 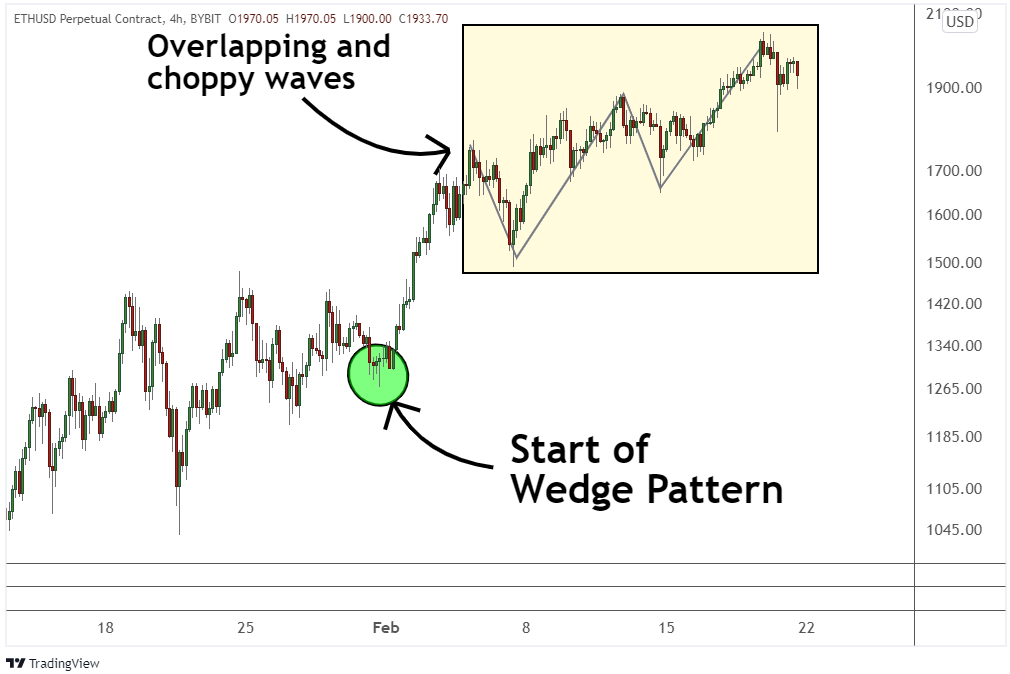 When you see these choppy and overlapping waves, the next step is to add your trend lines to the pattern. 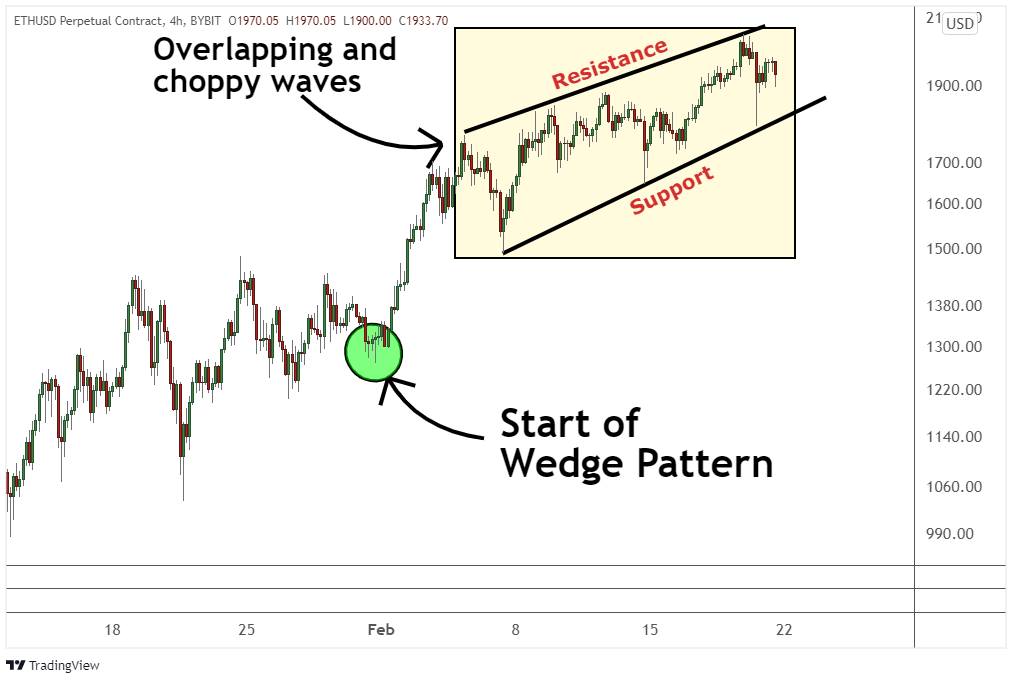 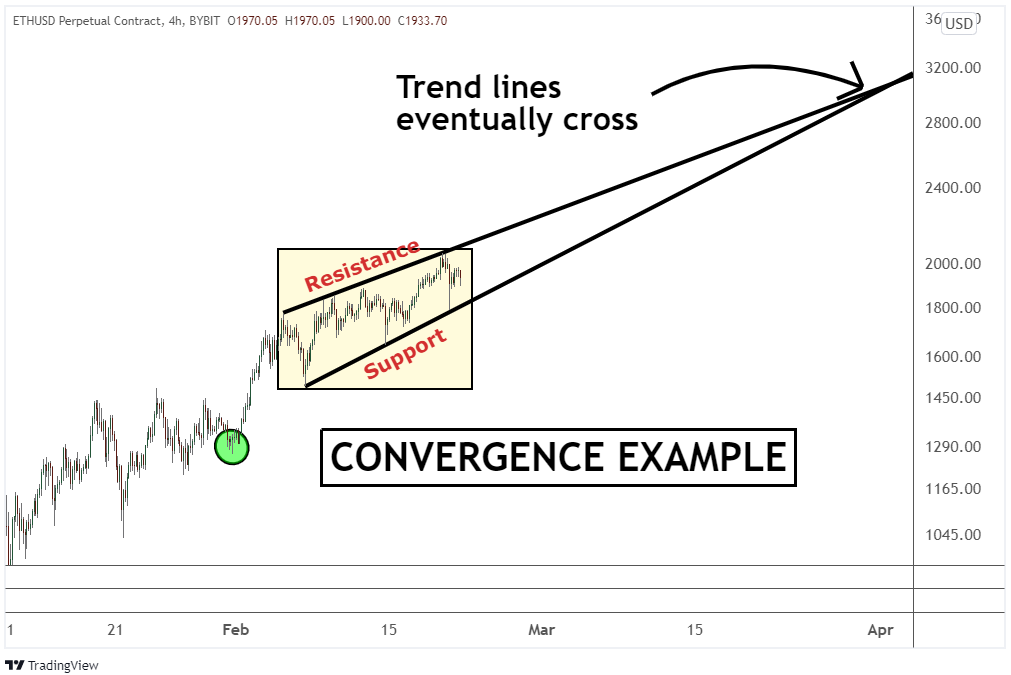 Now, if you have both support and resistance lines angled higher, then check to see if they’re converging. At some times this convergence is more obvious than at others. The easiest way to determine if the two trend lines are converging is by extending each of the lines to the right. If they cross each other in the future, then they’re converging — and this is a rising wedge pattern. If they don’t eventually intersect, then some other pattern is forming.

Within an ascending wedge valid pattern, you’ll find the following:

If you spot a pattern with each of these ingredients, the chances are strong that you’re looking at an ascending wedge pattern.

There are a couple of other items you might see as well, though these are guidelines and not guarantees.

Divergence with an Oscillator

Add an oscillator to the bottom of your chart, such as the relative strength index (RSI) indicator. If the RSI is showing divergence, it’s another clue that this is a rising wedge pattern. 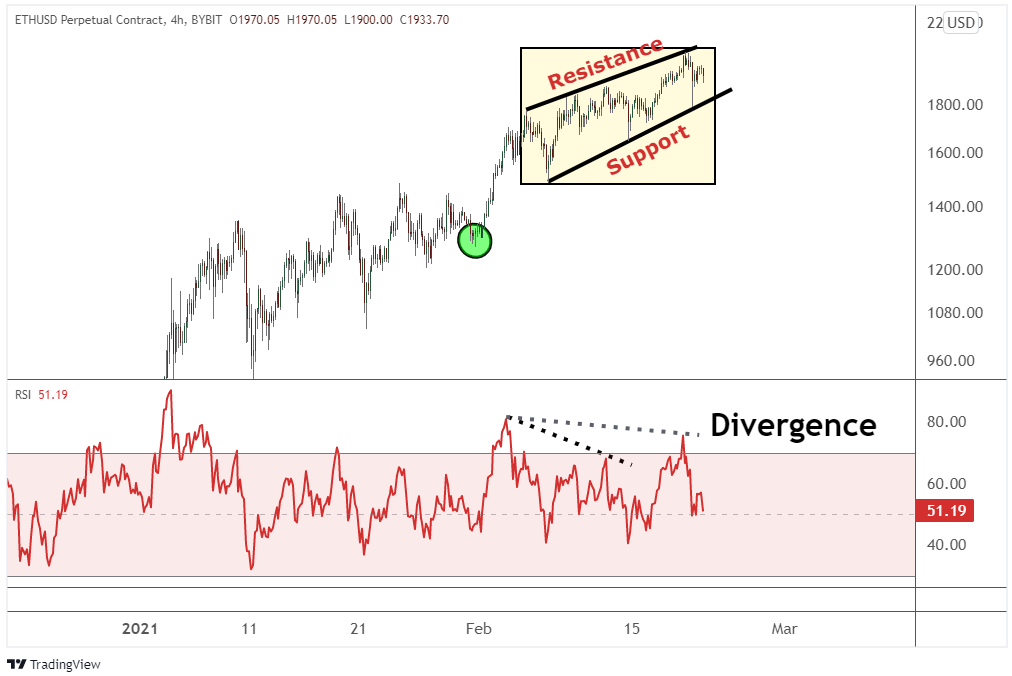 Oscillator divergence is created when the price makes a higher high, yet the oscillator makes a lower high. The price is said to be diverging from the oscillator, as the two aren’t in sync.

Another clue you may be witnessing an ascending wedge pattern may be found in the cryptocurrency’s volume. 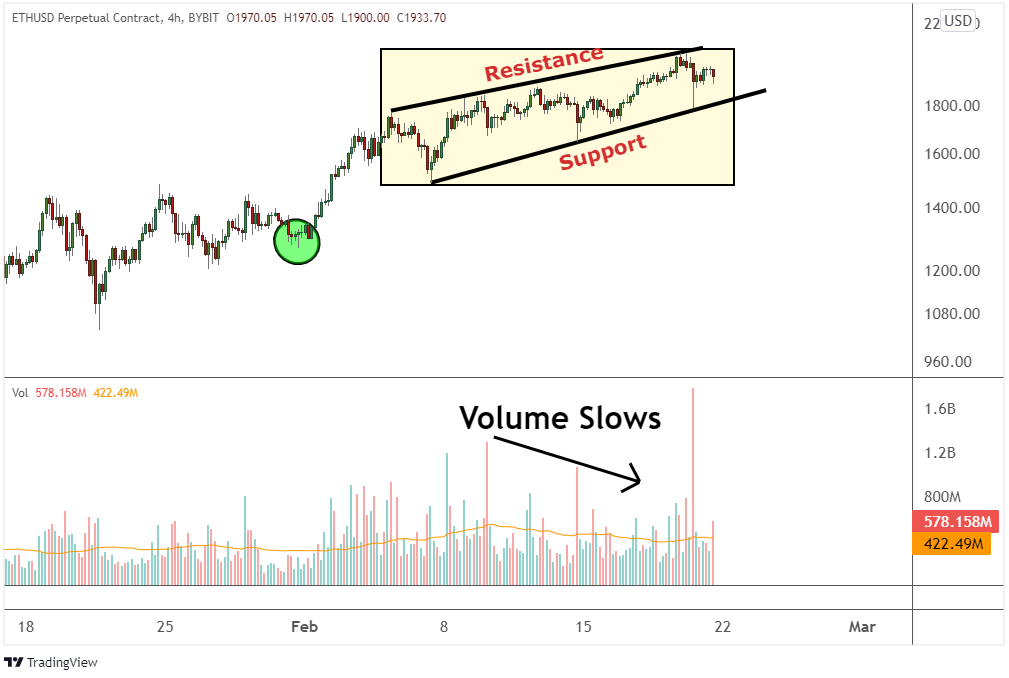 If the volume is falling as the wedge pattern advances, then this indicates bullish whales are no longer supporting the price. In circumstances like this, the market is mature for a reversal.

How to Trade with a Rising Wedge Pattern

One of the most obvious and lucrative rising wedge patterns in crypto was formed by Bitcoin going into April 2021. You may recall that Bitcoin was in a monster uptrend from the March 2020 pandemic low into 2021 high. It rose nearly 1,600% over this period, with bullish predictions forecasting immediate trends up pricing. 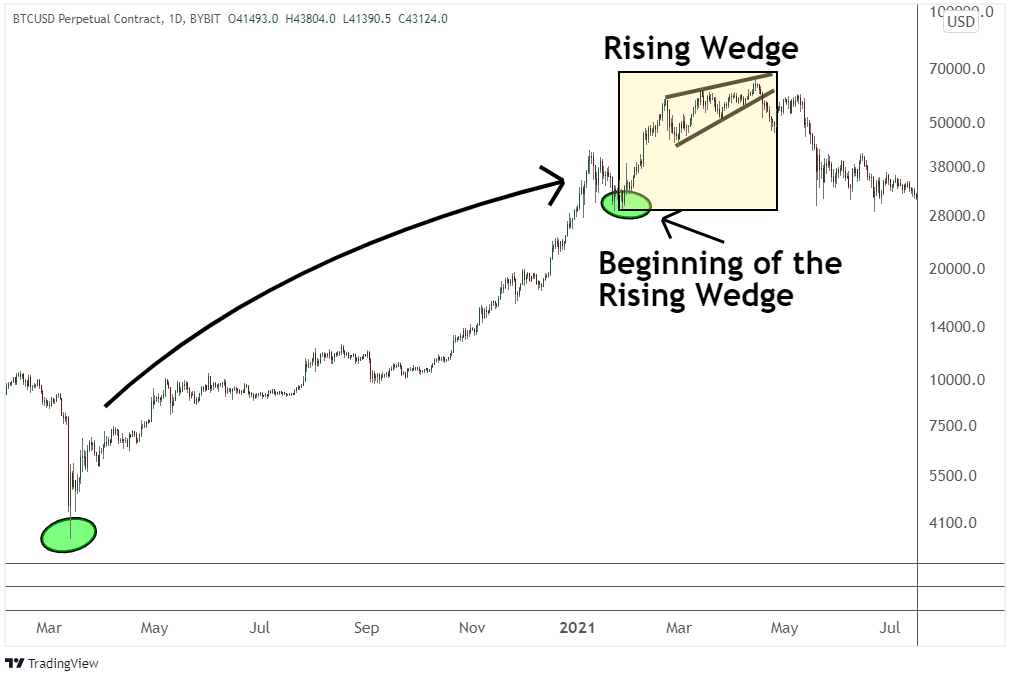 When rosy market sentiment is making traders feel positive with forecasts of skyrocketing price levels, that is an ideal spot for the ascending wedge pattern to appear. Rising wedge patterns are notorious for appearing at the end of large rallies that have carried on for too long.

After completing the bulk of the rally in early January 2021, Bitcoin began to correct for the last part of the month. Beginning in late January, Bitcoin rallied again, but this rally becomes choppy and overlapping. 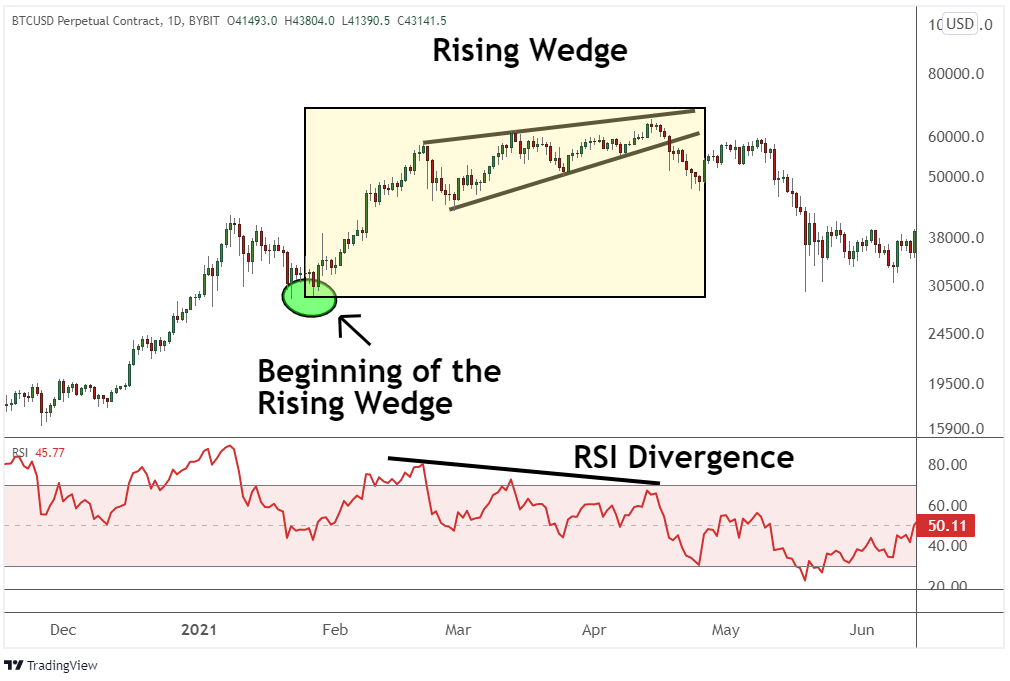 The rally begins to lose momentum, and divergence with the RSI indicator appears, symptomatic of rising wedge patterns.

The resistance and support trend lines within the pattern fit the definition, as both are rising and converging. Each of these clues is present to signal the trader that a top is forming — and to be on the alert for a bearish reversal.

Trading the bearish reversal is quite easy. As the trend is shifting from up to down, the trading opportunity is to short sell the market or close out of your long positions. 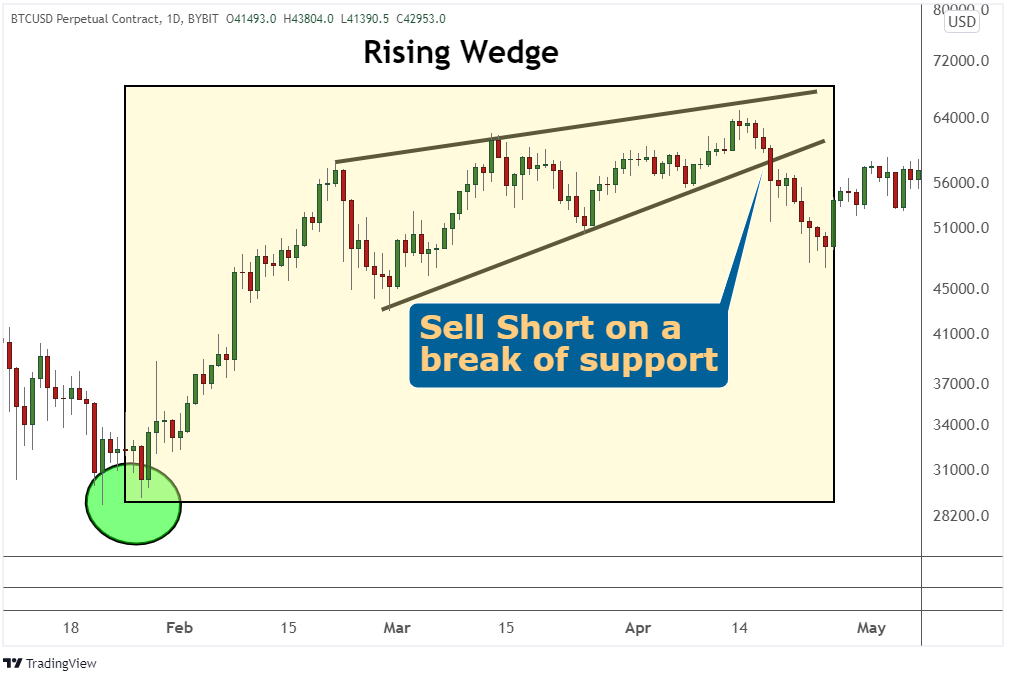 The trigger for the short entry will be a break of the support trend line. Some traders will wait for the candle to break and close below the trend line before entering the trade. Other traders sell short once the price has breached the trend line by a specified amount, like 50 or 100 points.

Still, it is preferable to selling short once a specified level below support has broken. The reason is that crypto markets tend to fall and crash fast. If you wait for the candle to close, you could be missing out on a better entry point.

Once support breaks, the market is giving you a big clue: the mood of the uptrend is beginning to change to that of a downtrend. 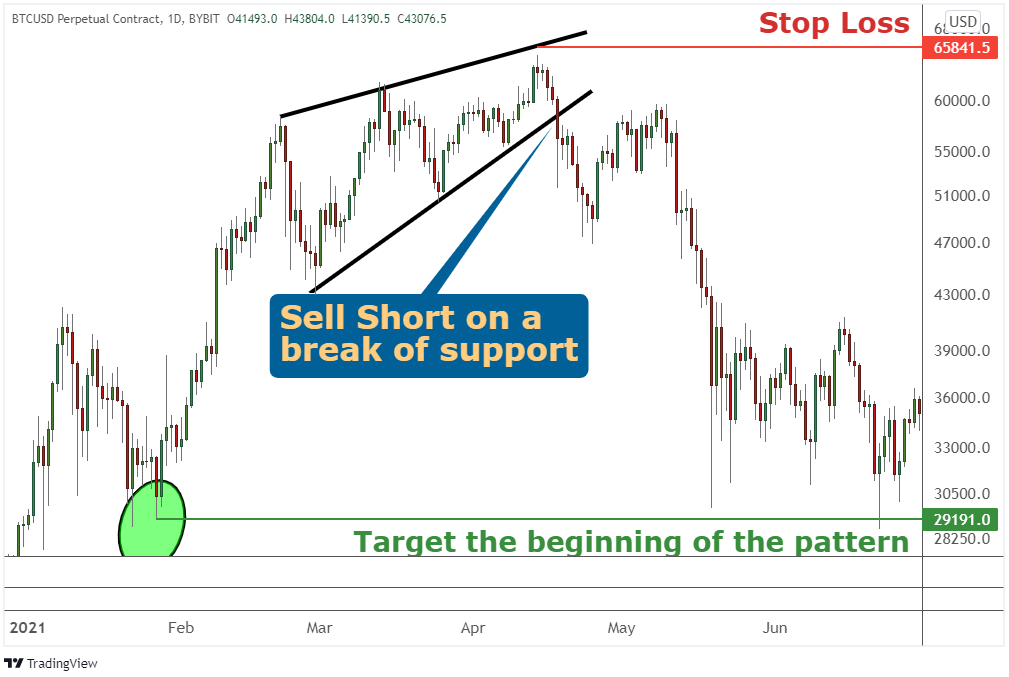 The stop loss for a short trade will be placed just above the recent swing high. If the market breaks the support trend line and rallies up to new highs, then some other pattern is playing out and the rising wedge has failed.

In hindsight, we can see that this pattern has played out well: within one month of the signal confirmation (by mid-May), Bitcoin corrects back to the origination of the pattern.

Limitations of the Pattern

Though the rising wedge pattern can signal excellent short sell opportunities, the pattern is not 100% accurate and there are some limitations to be aware of.

First of all, the ascending wedge pattern can carve rather quickly, yet it’s difficult to confirm until the pattern has progressed nearly 2/3 of the way to completion. This means you’ll need to constantly review the market to make sure the clues and indications of the rising wedge are present.

Once the pattern is displaying many of the specified markers, then you can set up the short-sell trade opportunity as trend line breakout below the support levels. Though the pattern is easy to spot, it can be a challenge to catch it while it’s forming, as you typically won’t see the clues develop until most of the pattern is complete. 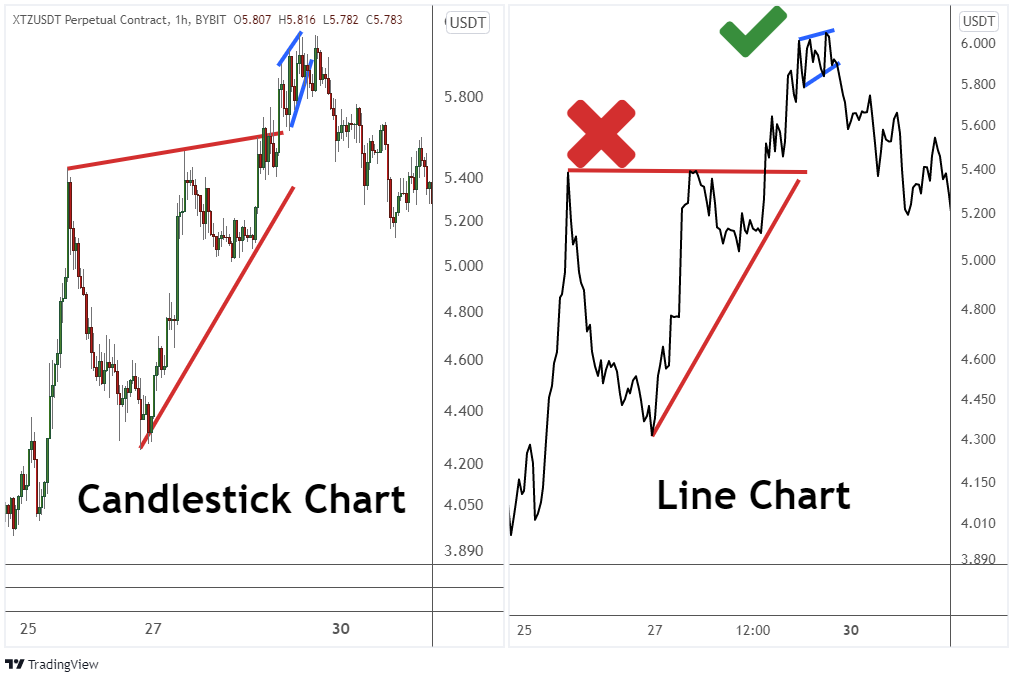 Secondly, smaller cryptocurrencies are susceptible to bad ticks and an occasional bad feed. These situations show up as extremely long wicks on the price chart patterns. When you see these wicks, it can be challenging to accurately discern what pattern is forming.

More commonly, smaller cryptocurrencies don’t have enough liquidity to maintain stable pricing. As a result, you’ll get quick price aberrations that can create long wicks. This is more likely to occur on smaller chart time frames.

In these situations, changing over to a line chart that is one or two chart frames smaller than your current one would be a better option.

That is because the line chart tends to remove the noise, enabling you to see the core pattern. Sizing down a couple of chart time frames will help you focus on the subwaves of the larger pattern.

In the Tezos (XTZ) example above, we have a 1-hour chart time frame. Several wicks can make a pattern look like a rising wedge. When you switch over to a line chart, the patterns become clearer and you can quickly discern which ones are and aren’t an ascending wedge.

However, when you switch to a line chart and size down the time frame, be careful not to size down too much. Minute chart time frames begin to lose their lucrative risk-to-reward ratios, as the spread cost of the trade tends to eat up any potential profits.

The rising wedge pattern is a favorite among traders and technical analysts, though it can be difficult to spot in real-time. In a reversal pattern, the rising wedge is often confused with the triangle pattern, which is a continuation formation.

The clear entry and exit signals the ascending wedge pattern provides make the rising wedge ideal for traders who want to short the market or use the signals to manage their long-term HODL positions.