How to Use Hanging Man Candlestick Pattern to Trade Trend Reversal 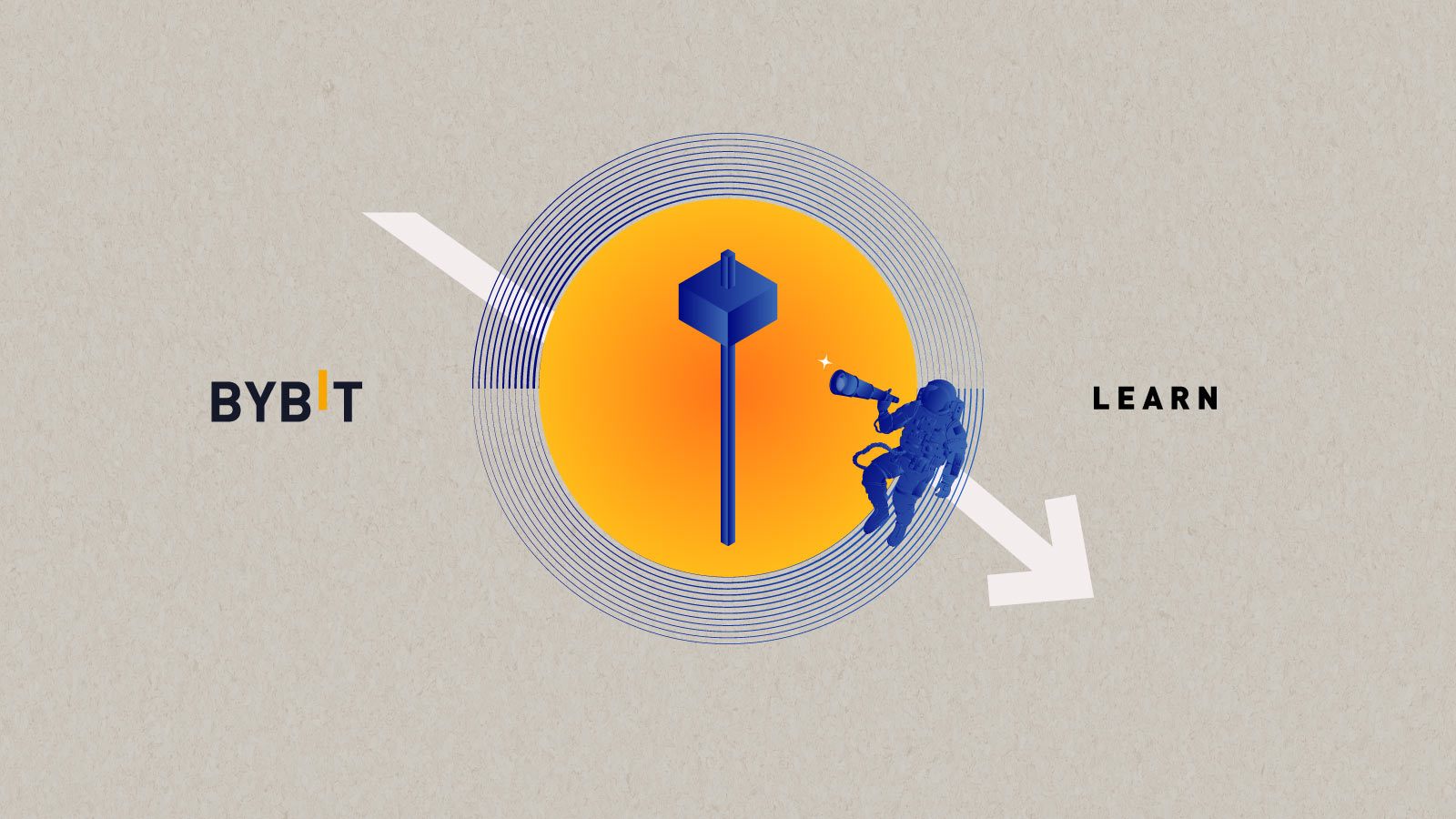 In technical analysis, the Hanging Man candle is a reversal candlestick pattern that appears at the top of a bullish trend and indicates a price reversal. Most price action traders use this pattern to identify the most reliable point to open a sell trade.

The Hanging Man candlestick pattern provides similar price action as other formations, such as Hammer, Doji, and Shooting Star. However, it appears at the top of an upward trend and provides a possible bearish trend direction. Now, let’s get down to the nuts and bolts of the Hanging Man pattern in the cryptocurrency market.

What is a Hanging Man Candlestick Pattern?

The Hanging Man is a candlestick pattern (bearish candlestick) that appears at the top of a bullish trend and provides a bearish reversal pattern. After a long bullish trend, this pattern is a warning that the trend may reverse soon, as the bulls appear to be losing momentum. Although this pattern is not an indication of a trend change, it generates a message that the price has already made a top.

In a price chart, the Hanging Man candlestick pattern provides a warning sign for buyers who want to hold the price for further gain. For buyers, it helps to manage the trade by getting out of the market with a profit, ensuring some gain. On the other hand, for sellers, it indicates a possible entry point, contingent on other confirmations.

Let’s see what the Hanging Man candlestick pattern looks like: 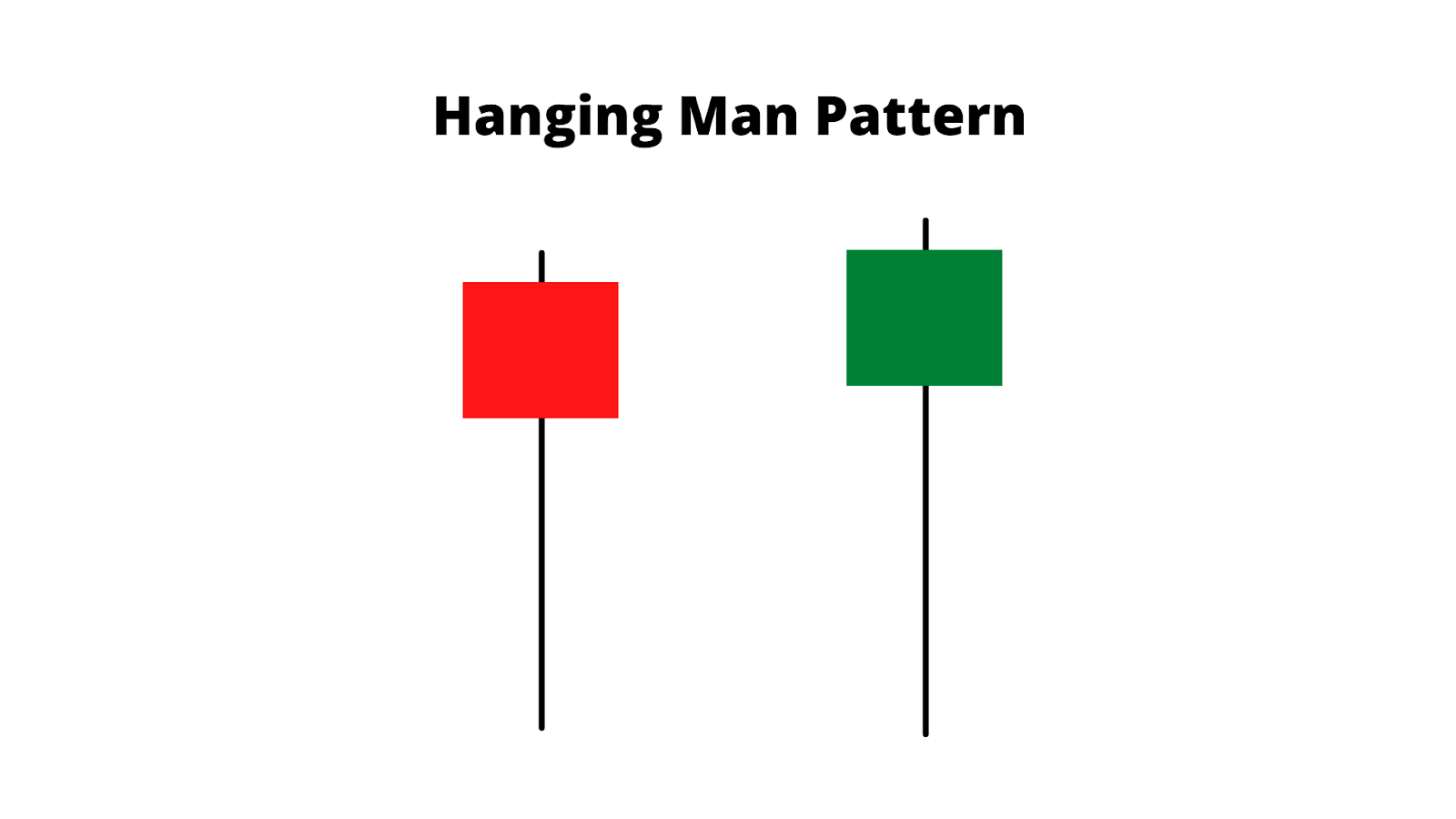 The Hanging Man looks like a hammer, as its opening and closing price remain closer with a long wick downside. For the pattern to work, the wick should be at least twice as long as the body.

Price action traders are familiar with this type of pattern in a swing low. However, it introduces a different story about the market, which is important to understand. Although the Hanging Man has a long bearish wick like a hammer, it is still a bearish signal. The bearish wick indicates extreme bearish activity during the day that has failed to hold until closing. 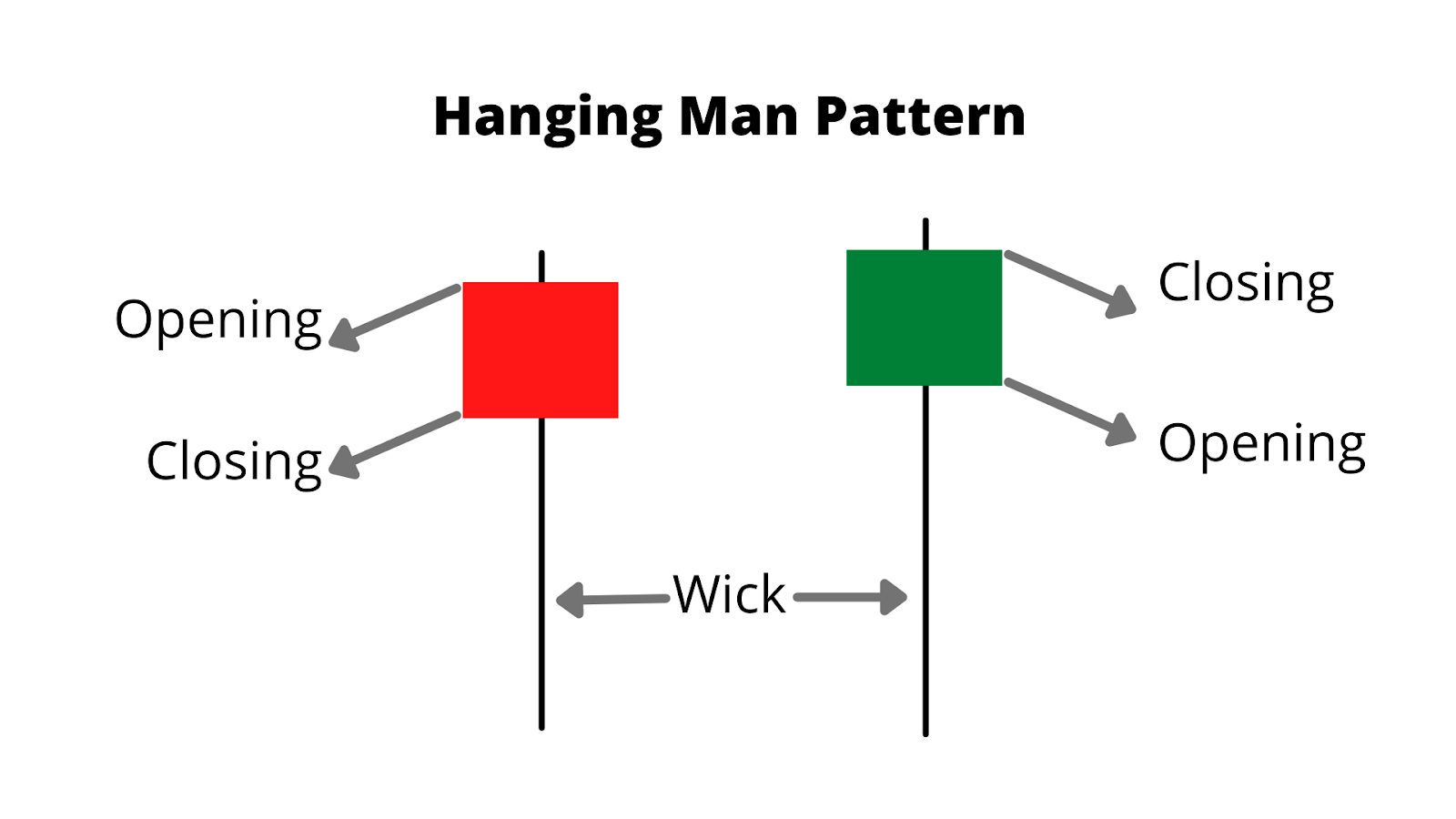 Although the Hanging Man pattern is valid for both bullish and bearish bodies, it is more potent with a bearish body than with a bullish one. In the bearish pattern, buyers take the price higher before the daily closing, and the bearish close is a sign that bears are stronger.

The Hanging Man does not provide a sell signal, yet it signifies possible bearish pressure in the price. Traders can use the RSI indicator to confirm the overbought condition at the Hanging Man to confirm the signal. Still, when two or more indicators provide the same price direction, traders can rely on it. More specifically, it’s essential to know how the next candle is forming. In general, any bearish daily candle after a Hanging Man pattern increases the possibility of upcoming selling pressure.

How Does the Hanging Man Correlate to Trend Reversal?

Trend trading is the most profitable trading style in any financial market. When big financial institutions and large investors join the market, a trend forms. On the other hand, the price in any financial market moves like a zigzag, with swing highs and swing lows forming. Any reversal candlestick formation from these swing levels provides the primary idea of price action trading.

Trend reversal happens when an opposing party enters the market and tries to change the price direction. However, the most significant sign of trend reversal is volatility at swing high/low. This volatility is a result of the pull between buyers and sellers, with an indecisive momentum. Later on, once the direction is set, the price is ready to move toward the opposite direction.

How to Spot a Hanging Man Pattern

The Hanging Man is a trend reversal pattern with a long wick downside. Identifying this pattern is easy, as it has a small body and a long wick. However, traders may struggle to find the most profitable location of this pattern. Remember that this pattern works well from the top of a swing, and identifying the swing requires good basic knowledge about price trend, support, resistance, and market momentum.

Although the Hanging Man pattern is a single candlestick, the trend-changing event happens once the candle is closed and the next bearish candle appears. While searching for the pattern, make sure to follow these guidelines:

Identify Enter and Exit Points with the Hanging Man Pattern

The primary requirement for the pattern is that it should appear after a bullish trend. In the cryptocurrency market, price moves by creating bullish and bearish swings. Finding a bullish trend requires multiple higher highs in the price. 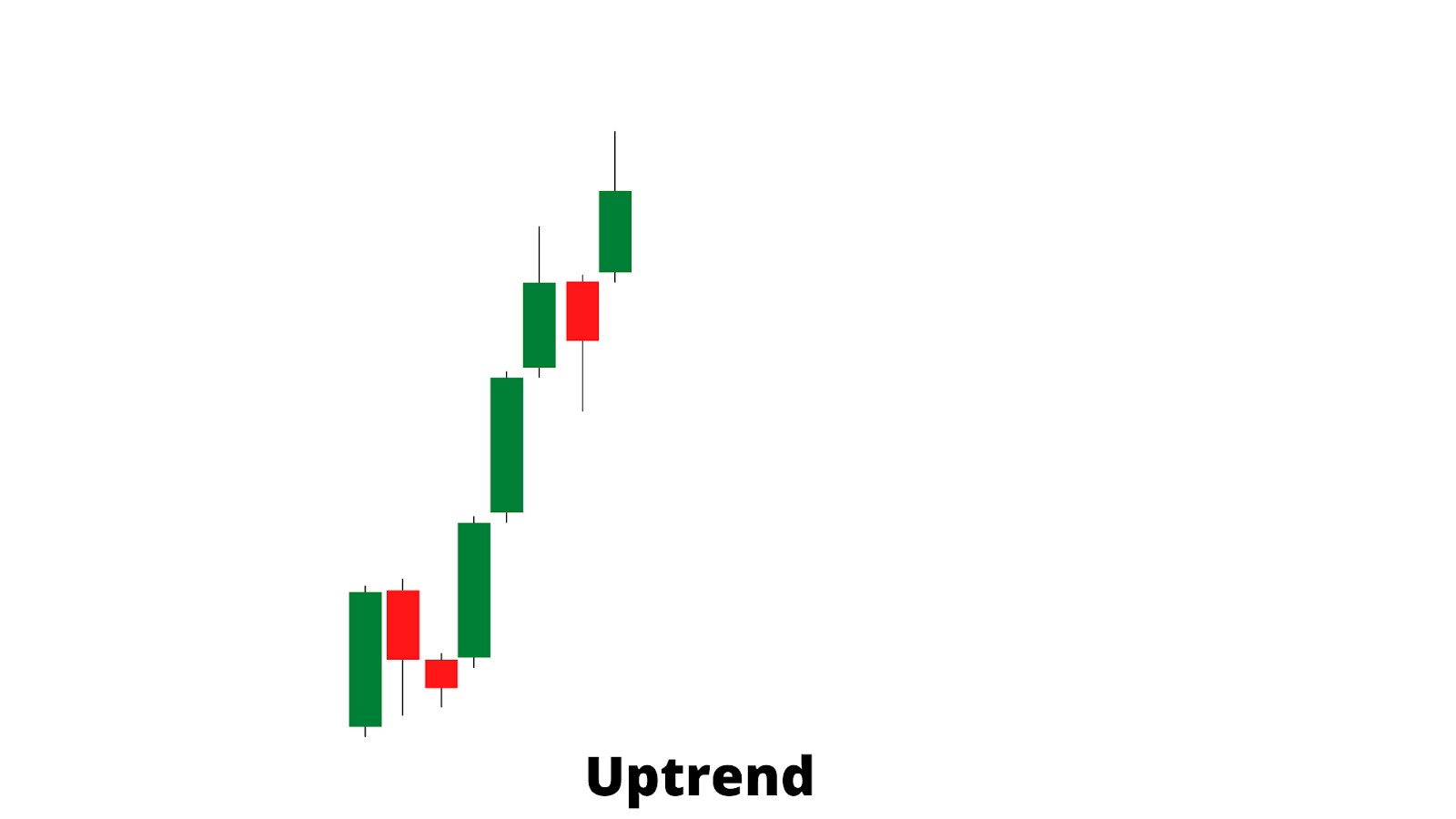 The above image is an example of an uptrend. The price is moving up by creating new highs. Although the price has some bearish candles, the bullish pressure remains strong. The primary indicator of a Hanging Man pattern is a bullish trend, such as this one, in which a corrective force in the bullish trend has a higher possibility of taking the price lower. 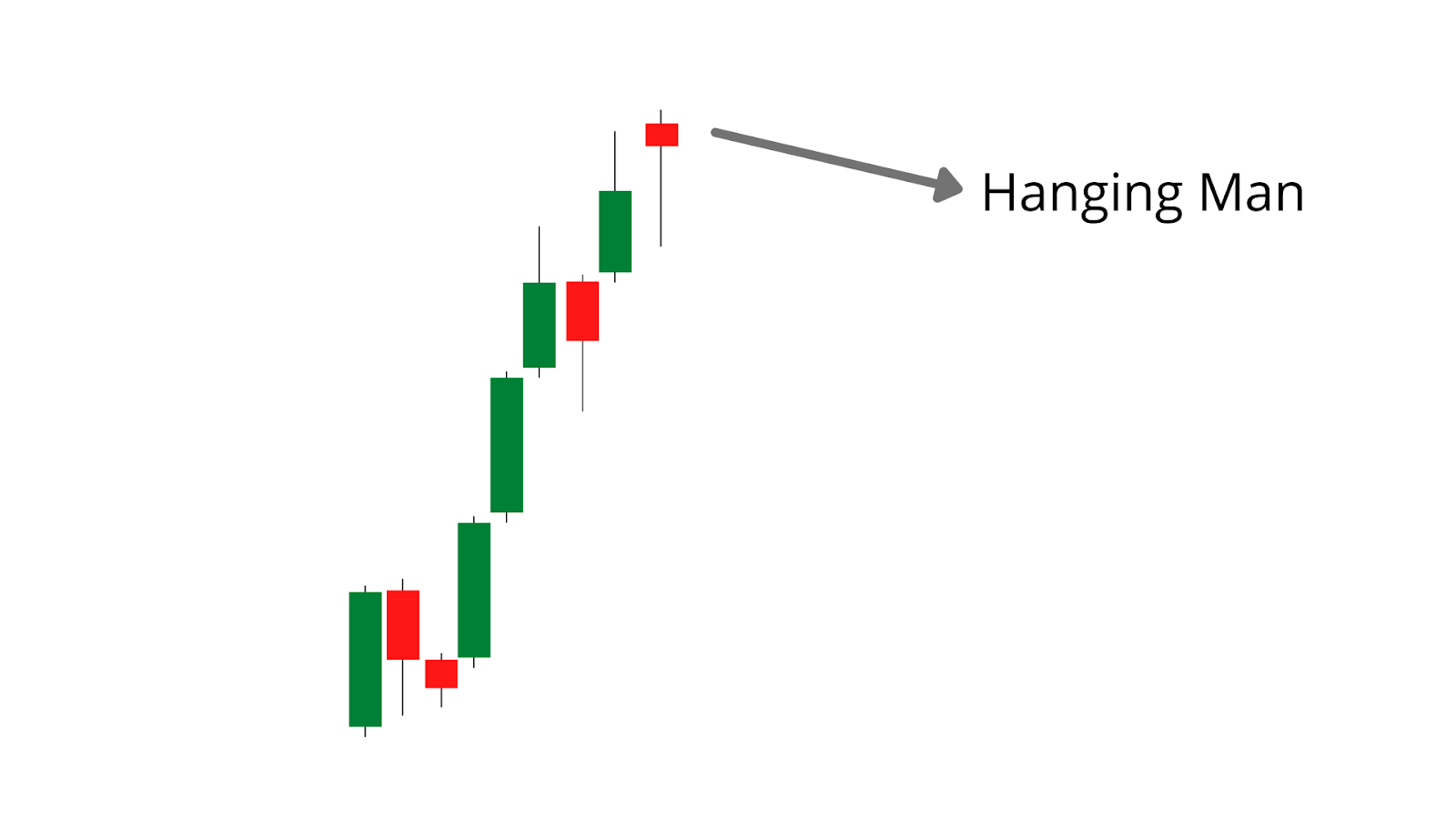 After that, identify the Hanging Man pattern at the top of a bullish trend. If this candlestick opens with a bullish gap, it’s a positive sign for sellers, but not mandatory. Remember that a valid/complete pattern should have a wick that’s at least twice as long as its body. In addition, any Hanging Man pattern from a significant resistance level is also valid.

Traders should wait for a bearish candle after the Hanging Man pattern develops before opening a sell trade. After the pattern appears, the bearish daily candle indicates that sellers have a higher possibility of initiating a downtrend. 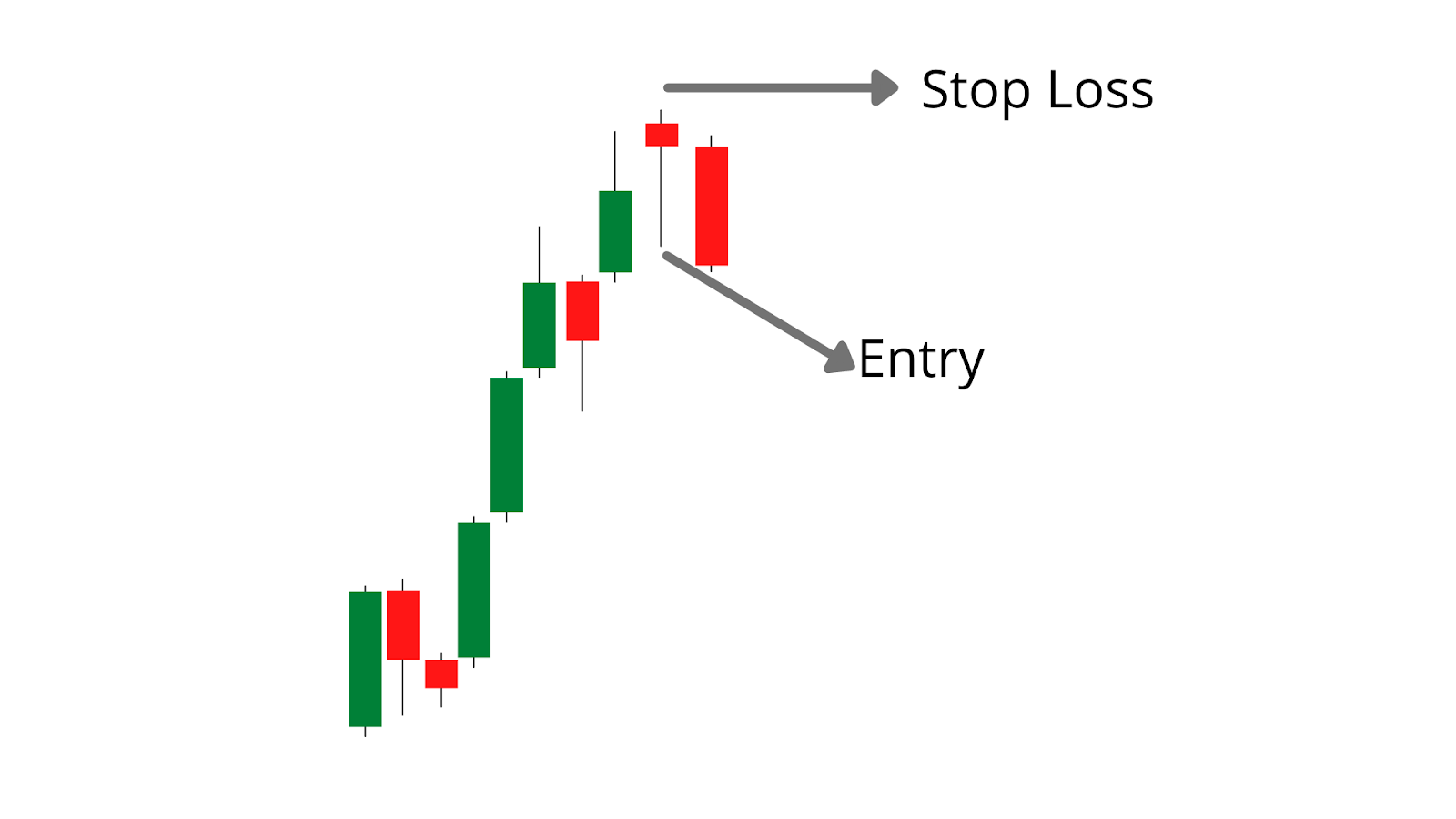 The aggressive approach of making a trade based on this pattern is to open a sell stop order below the candle’s low. Usually, the stop loss is placed above the candlestick pattern, with some extra buffer to protect yourself in case of false breakouts. At the same time, the take profit will be based on the trend’s strength and nearby support levels.

Success in cryptocurrency trading depends on how you manage trades. The global financial market becomes uncertain when any unexpected move occurs. Although you’re trading a Hanging Man pattern from a swing high with a proper sell entry, there’s still the possibility of losing money.

Example of Hanging Man in a BTCUSD Chart

First, let’s see how a bullish trend forms for BTCUSD before the Hanging Man pattern appears. 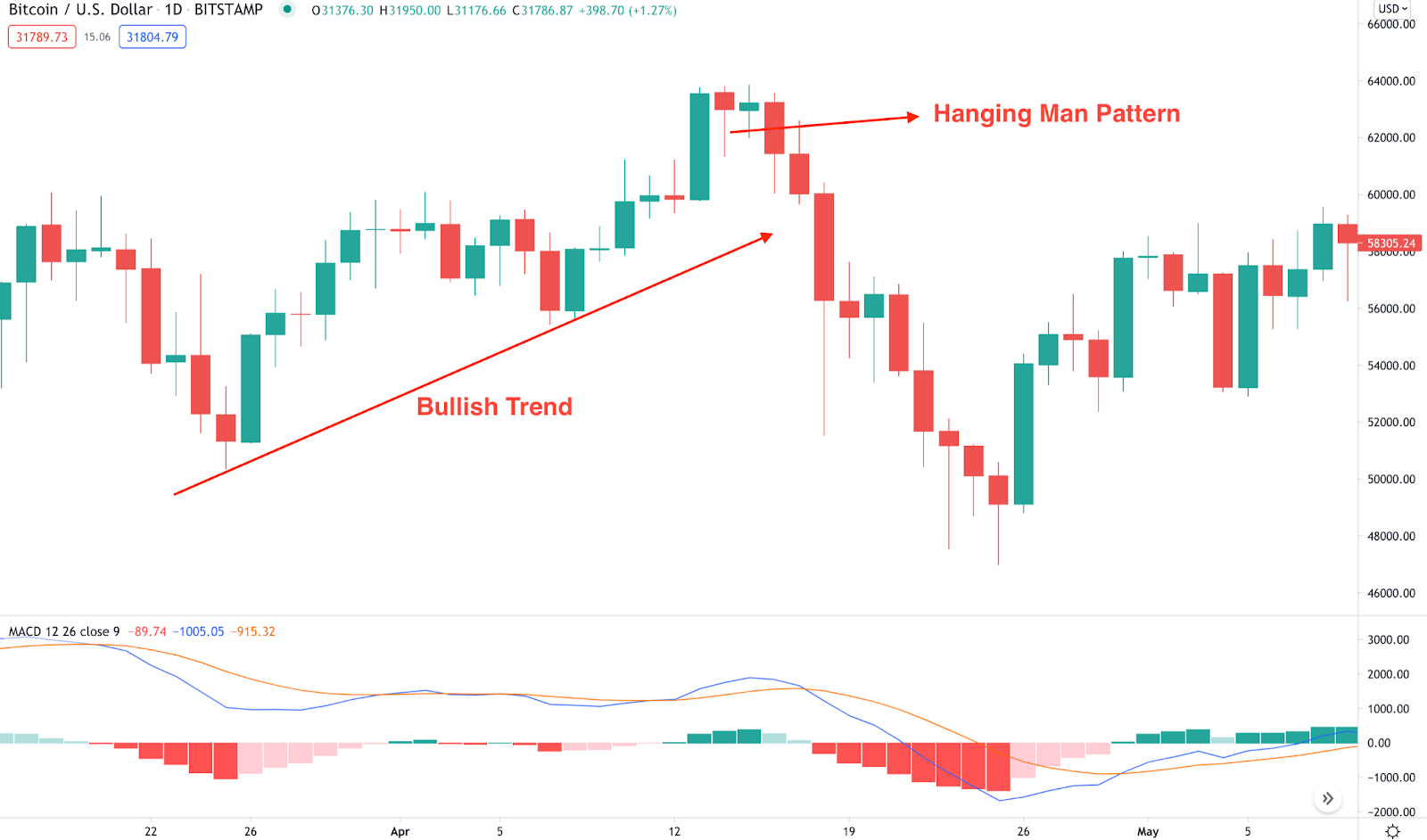 In the above image, we can see that the price moves higher by creating higher highs. Then, as soon as the pattern forms at $64,000, the price changes its direction. Here the change in direction is confirmed as soon as the price makes a bearish daily close after the formation.

The next day, if the price moves above the Hanging Man’s high, the bearish possibility will be invalidated. Therefore, the stop loss should be above the candle’s high, and the take profit will be based on near-term support levels. However, traders can use multiple take-profit levels to minimize the risk associated with the market.

Hanging Man vs. Hammer vs. Shooting Star: The Differences

These three patterns are almost similar and may confuse traders. However, if you understand the core logic of each pattern, you can easily differentiate them. 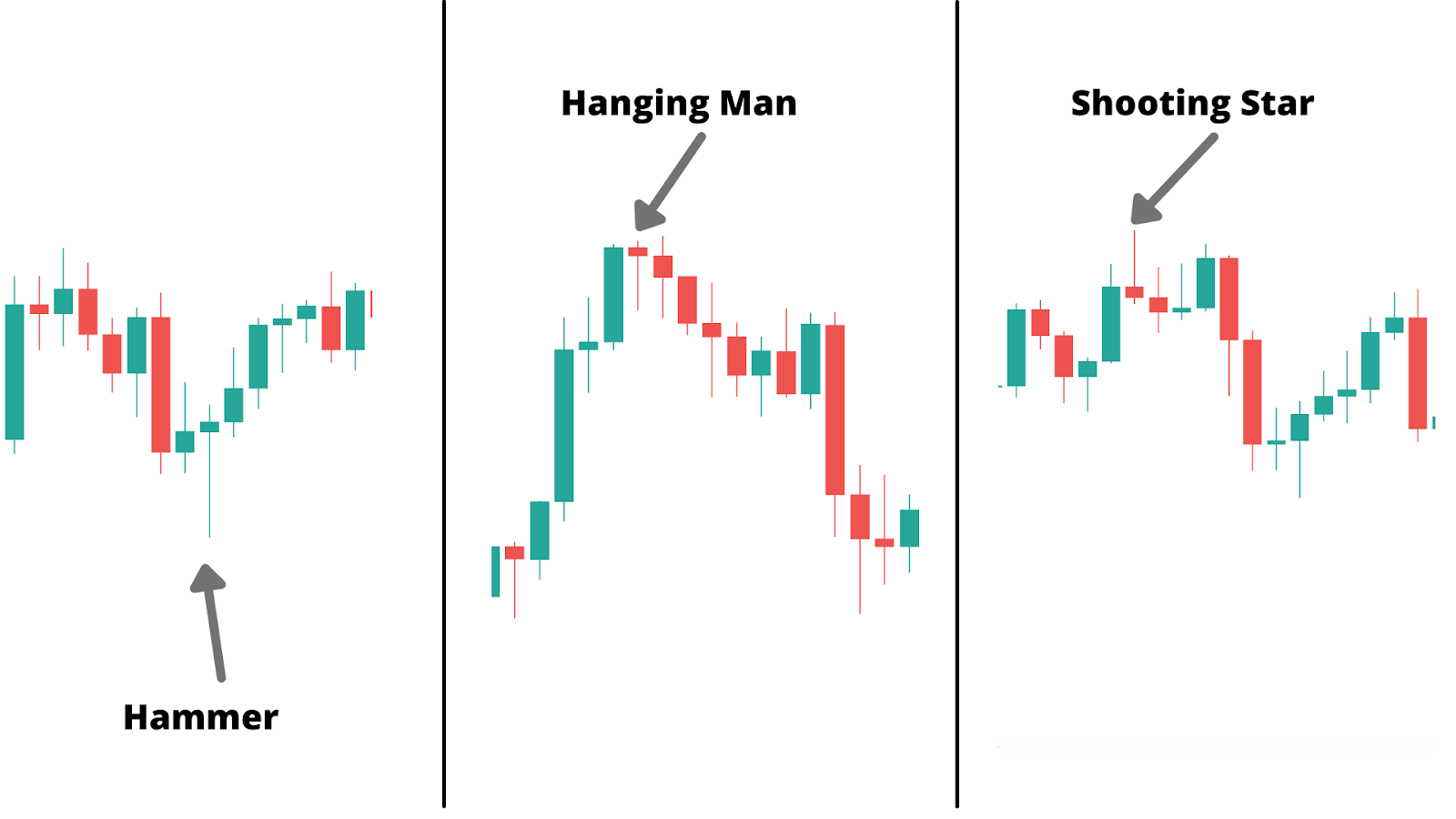 The comparison of the hammer, hanging man, and shooting star candlestick.

The Hanging Man and Shooting Star appear at the top of an uptrend. Both bodies have a long wick, at least two times longer than their bodies. On the contrary, the Hanging Man and Hammer provide a trend reversal signal, in which the key difference is the nature of their trend.

Each of these candlesticks provides a reliable result in the daily chart, as every one of them can show the entire price action of the day. Traders can use these patterns in intraday trading, but it may require additional confirmations from other dependable indicators.

How Reliable is a Hanging Man Pattern?

The Hanging Man is a profitable price reversal indicator that appears after a bullish trend. However, there is no guarantee that the price will rebound after forming this pattern. It provides the highest accuracy from a significant resistance level with a volatile bullish trend. Moreover, after a Hanging Man pattern forms, traders should wait to see how the next candle forms. The pattern is valid if the next candle is bearish and closes below the Hanging Man’s shadow.

On the other hand, this pattern may fail from any random place, as demonstrated in the image below: 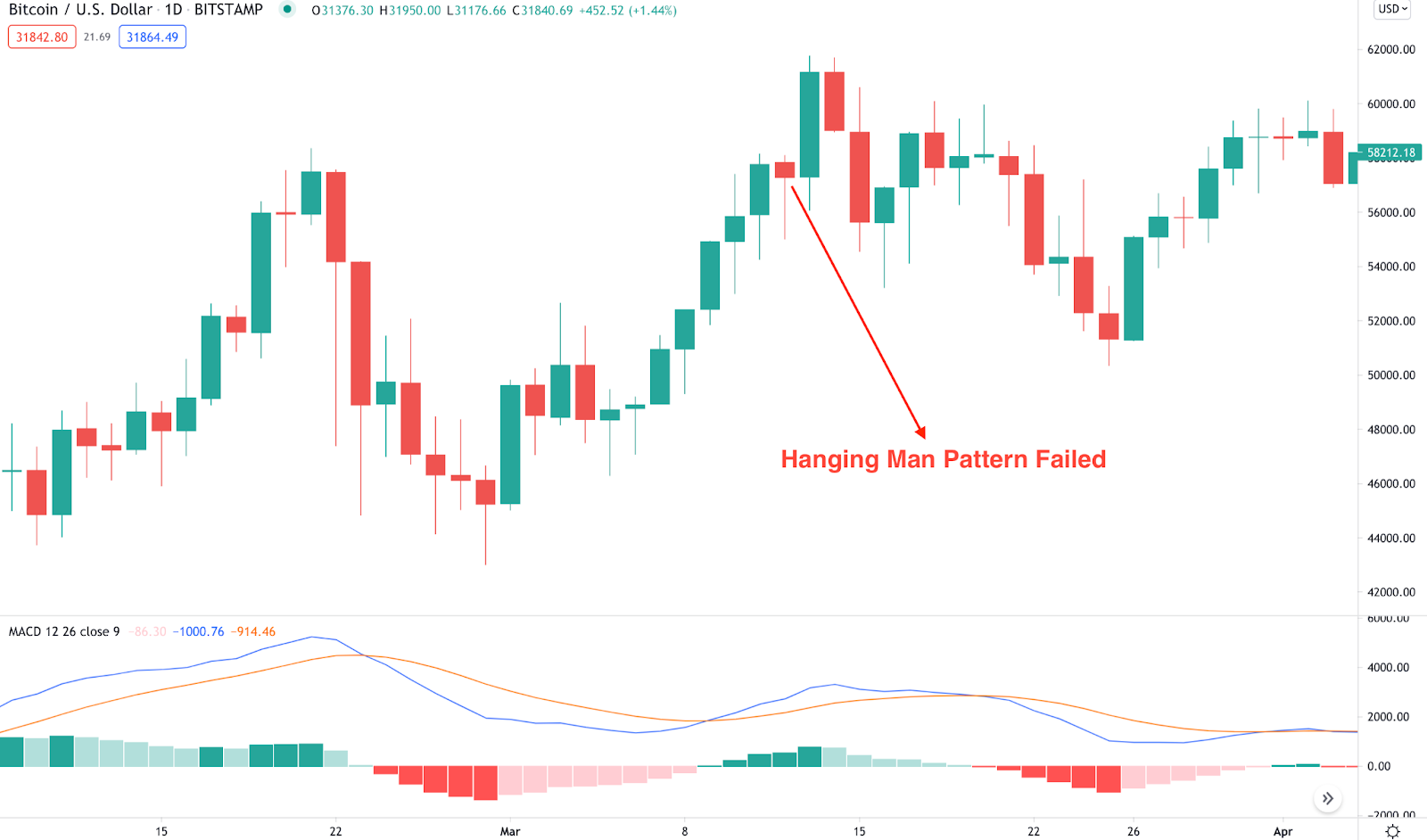 Overall, the success of the Hanging Man in trading depends on how traders utilize this candlestick with an appropriate trading strategy. Traders can use this pattern as an additional confirmation to reduce risk.

Indicators to Confirm the Signal from a Hanging Man Candlestick Pattern

The Hanging Man pattern does not provide any sell signals, so traders should consider other tools, like price action or other indicators, to increase trading probability.

The formed pattern from a significant resistance level may work as an additional confirmation of upcoming bearish pressure. 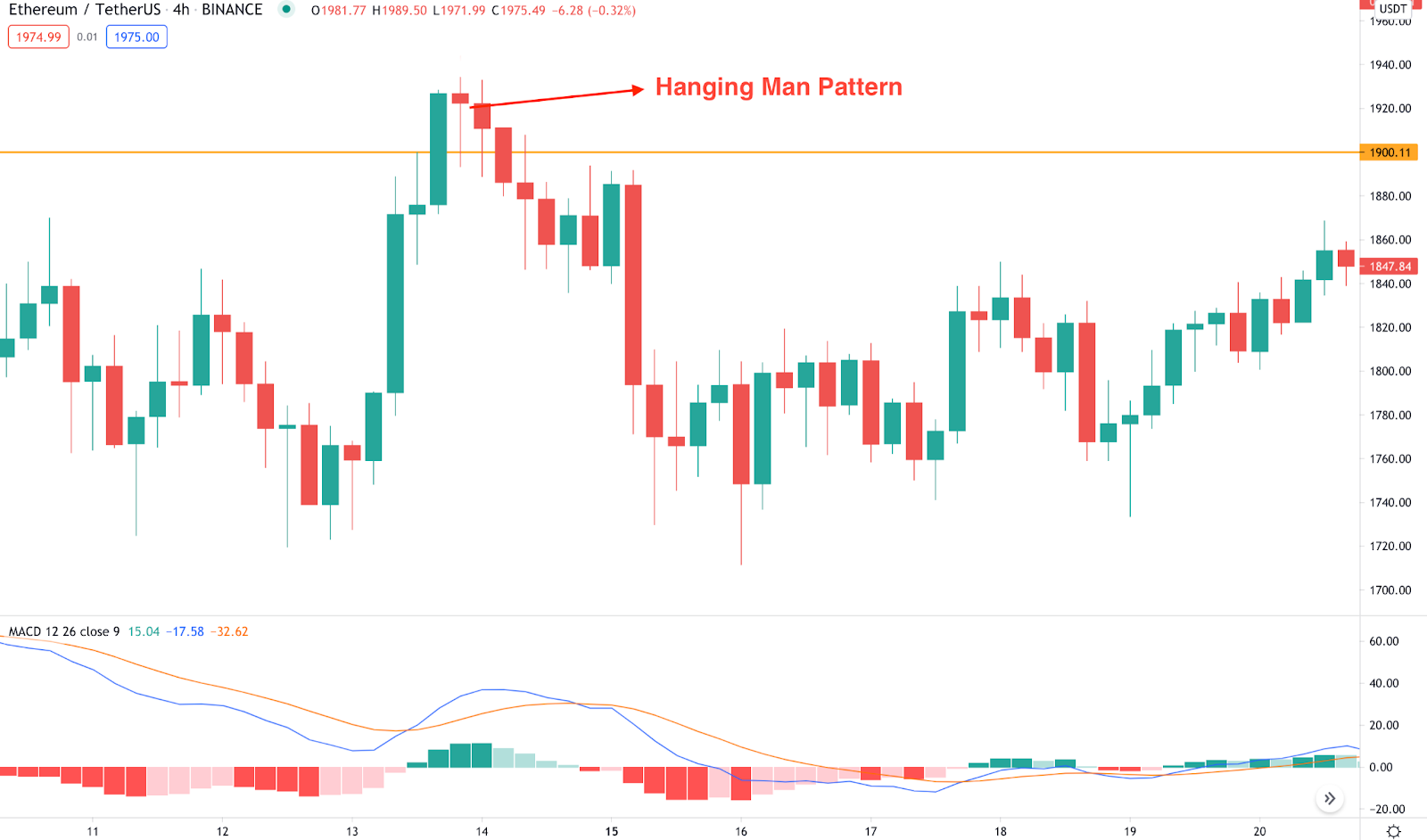 In the above image, the Hanging Man pattern develops near a resistance level on this ETH/USD Chart. As soon as the candle low is broken, the price moves lower with an impulsive bearish pressure. 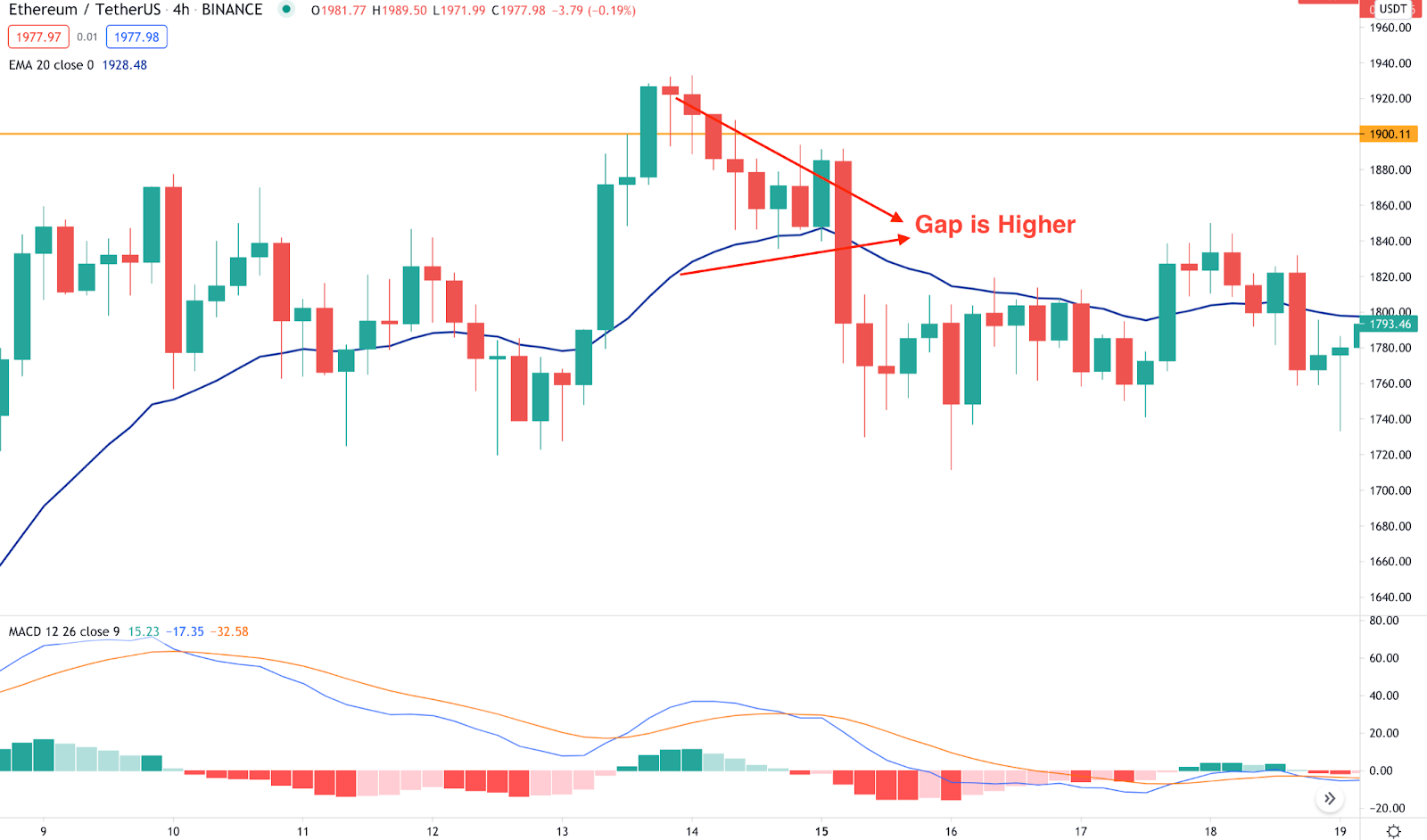 In the above image, we can see the gap between the 20 EMA and the price expands while the price forms a Hanging Man pattern near a resistance level. Subsequently, the price moves lower toward a dynamic 20 EMA, proving a 1:2 risk-to-reward ratio.

The Hanging Man formation is a single candlestick pattern that appears at the top of an upward trend and signals a potential change in the trend direction. Although this candlestick is similar to the Hammer and Shooting Star, there are some key differences in price direction and formation. This pattern is validated once it forms from a significant resistance level and its daily low is broken.

Still, traders should closely monitor price action using other candlesticks to increase the trading probability. Moreover, strong trade management and strategic trading strategies are required in order to get a reliable outcome from any candlestick-based trading.