Hammer Candlestick: What It Is and How to Spot Crypto Trend Reversals

Trading in the financial market requires considerable knowledge of technical and fundamental analysis. The ultimate approach is to identify the price direction based on price action analysis. If done correctly, traders will make money. However, finding the price direction requires complex analysis and multiple confirmations using trading tools like candlesticks, price patterns, and trend recognition.

We’ll discuss how the hammer candlestick shows a reversal in price direction after a bearish trend, and then we’ll consider a complete hammer trading strategy.

What Is a Hammer Candlestick?

The hammer is a bullish reversal pattern that appears after a long bearish trend. It has a petite body and long lower shadow. It is a price pattern with the opening, and closing prices remain close, indicating that bears have become active but closing the price near the opening level.

The hammer candlestick pattern shows a story about market supply and demand, easily observed by watching how the candlestick forms. A long lower shadow indicates that sellers have taken the price down, failing to hold it at the new low. Later on, buyers have joined the price from the low, successfully taking the price near the daily opening level. In general, the hammer usually appears after the price of an asset decline.

When the hammer candlestick patterns appear, it could signal that an upcoming potential reversal or market sentiment is about to turn. But, the price must show momentum following the hammer pattern as a confirmation.

There are two conditions that can affect the strength of the hammer’s signal:

The hammer pattern is a single candlestick pattern that has a small body. The body of a hammer candlestick can be either:

The candlestick color doesn’t carry much weight because the hammer candlestick pattern will always show a bullish signal regardless of the candle’s body color.

The core event of a hammer candlestick happens in the lower shadow. Thus, the success rate of the candlestick depends on how long the wick is, compared to the candle’s body. Usually, a good hammer pattern should have a wick that’s two times longer than its body, whereas greater length shows more exhaustion to the price with an increased buying possibility.

Let’s have a look at the anatomy: 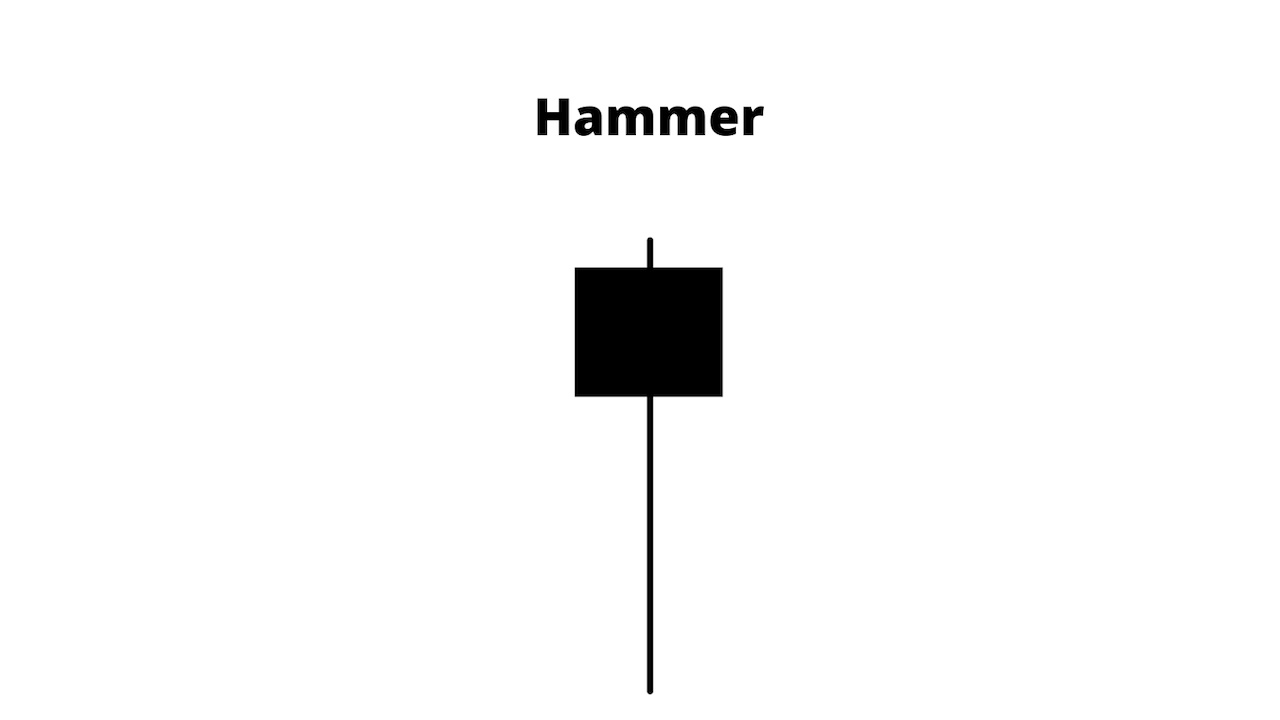 Above, we see a single candlestick with a more petite body and a long shadow. The bearish wick represents sellers’ rejection, but as a trader, we need to know more. So let’s have a look at what’s inside the hammer candlestick: 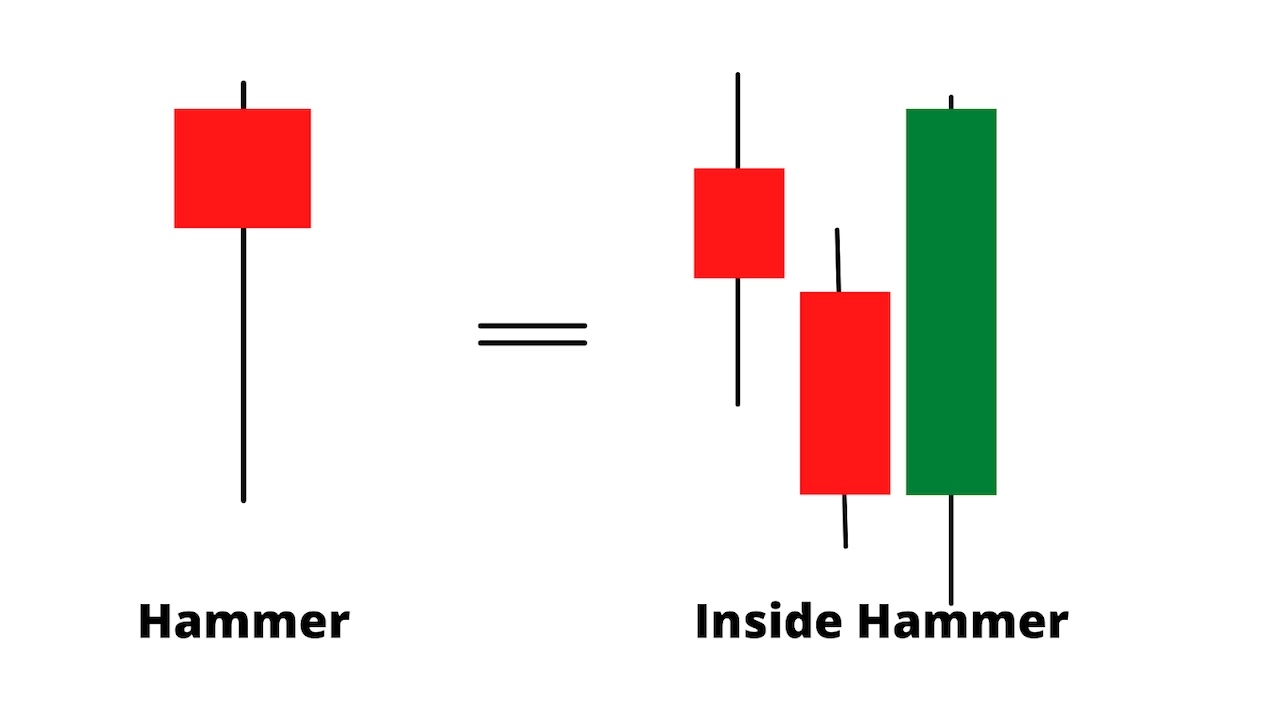 If the candlesticks in the above image were taken from a daily chart, it would represent an intraday portion showing what’s inside the hammer. Here, the H4 candles lead to a more reliable view of how sellers have joined the market and been beaten by buyers.

In the above section, we’ve seen that the hammer has a small body and a long wick. But what are the other conditions? 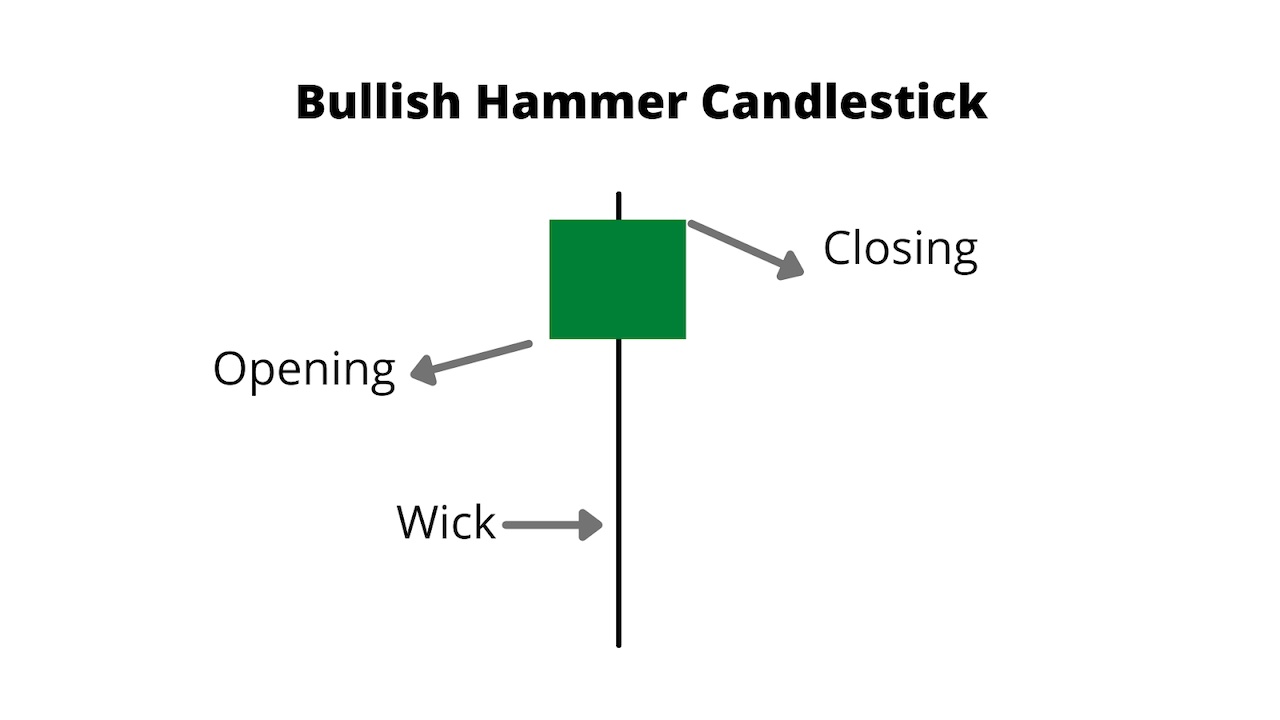 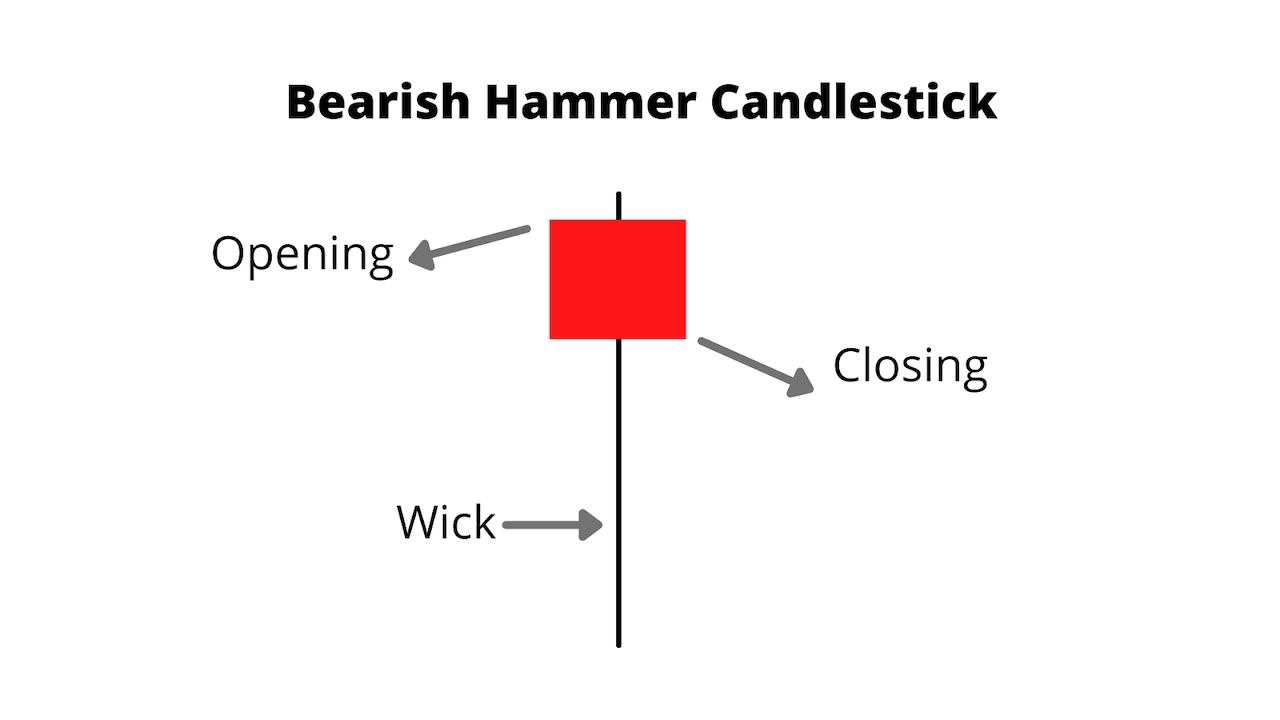 The inverted hammer is a trend reversal pattern, but it is less reliable than a bullish or bearish hammer. A normal hammer candlestick consists of only one candle, and its wick is at least two times the length of its body. However, the main difference between the normal and inverted hammer is the shadow remains above the candle’s body.

A bullish inverted hammer is a single candlestick pattern with a small body and a long upside wick. In this pattern, the closing price remains above the opening price, pointing out a buying pressure at closing. The bullish inverted hammer appears after a prolonged downward pressure and indicates a buying possibility. The success rate of this pattern depends on the body and the wick’s length. 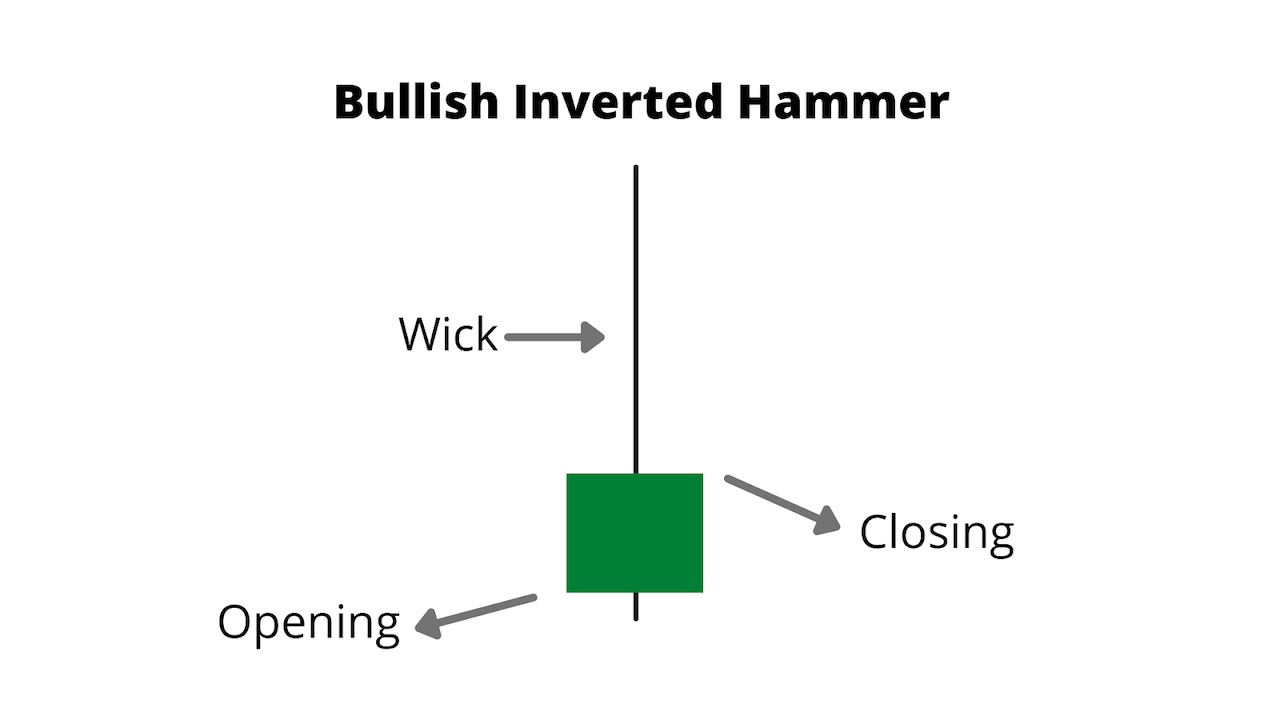 Here’s an illustration of the bearish inverted hammer: 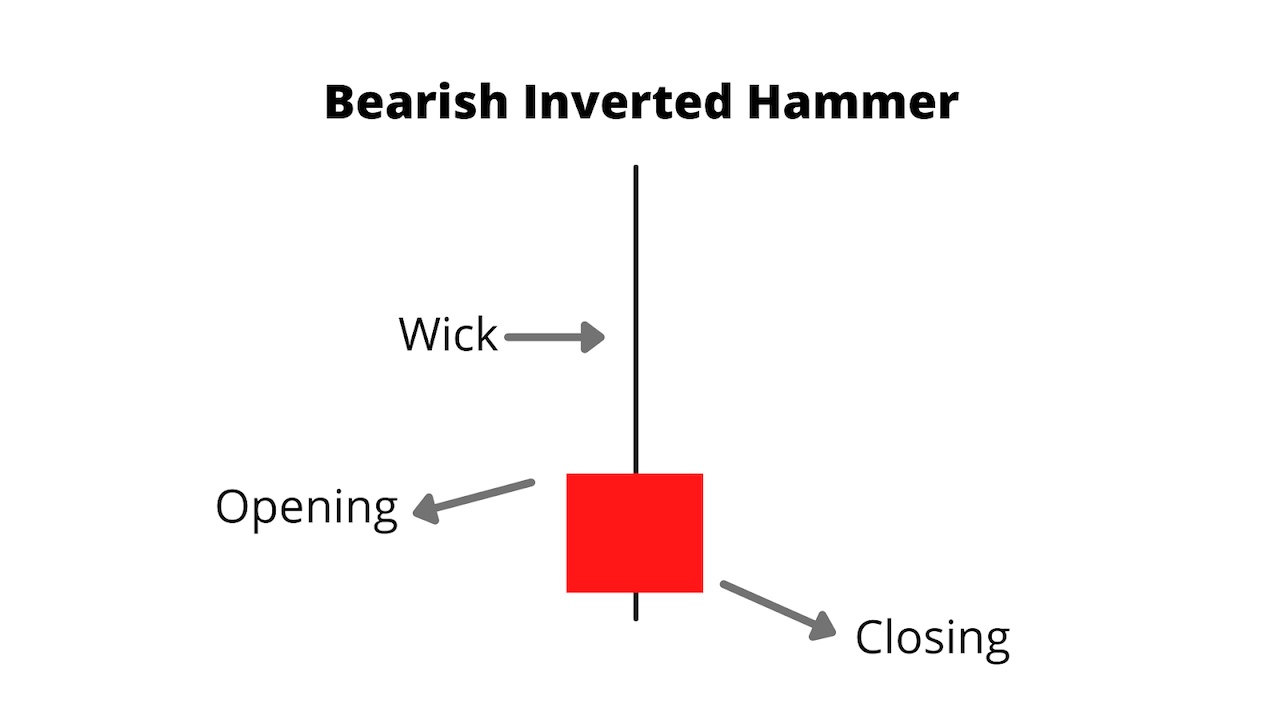 Traders should understand the practical uses of the hammer pattern, along with other indicators, to make a profit. You can rely on the hammer candlestick as a primary element to formulate a trading strategy. Still, its accuracy can only be confirmed when used with other technical indicators and technical analysis tools.

We’ll look at some of the trading strategies to use with the hammer pattern.

The global financial market cycles create and change market trends. Most of the significant top-bottom results from strong fundamental news, but cryptocurrency also depends on the global economic condition, regulation conflict, crypto acceptance, and more. The first requirement of this strategy is to identify a strong downtrend that has broken all near-term lows. 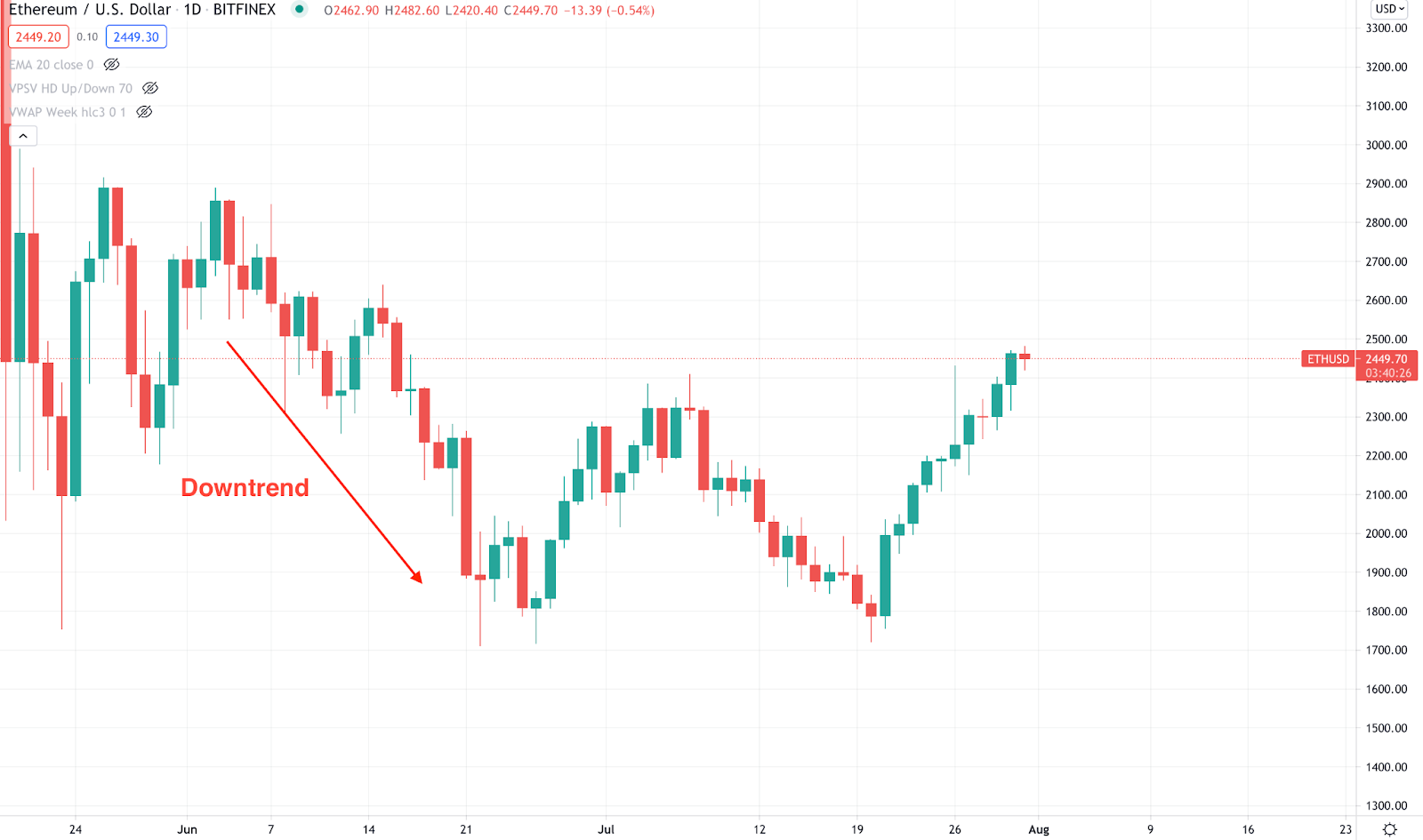 In the above image, a daily ETH chart, the price moves lower, breaking below the near-term low of 1800.00. 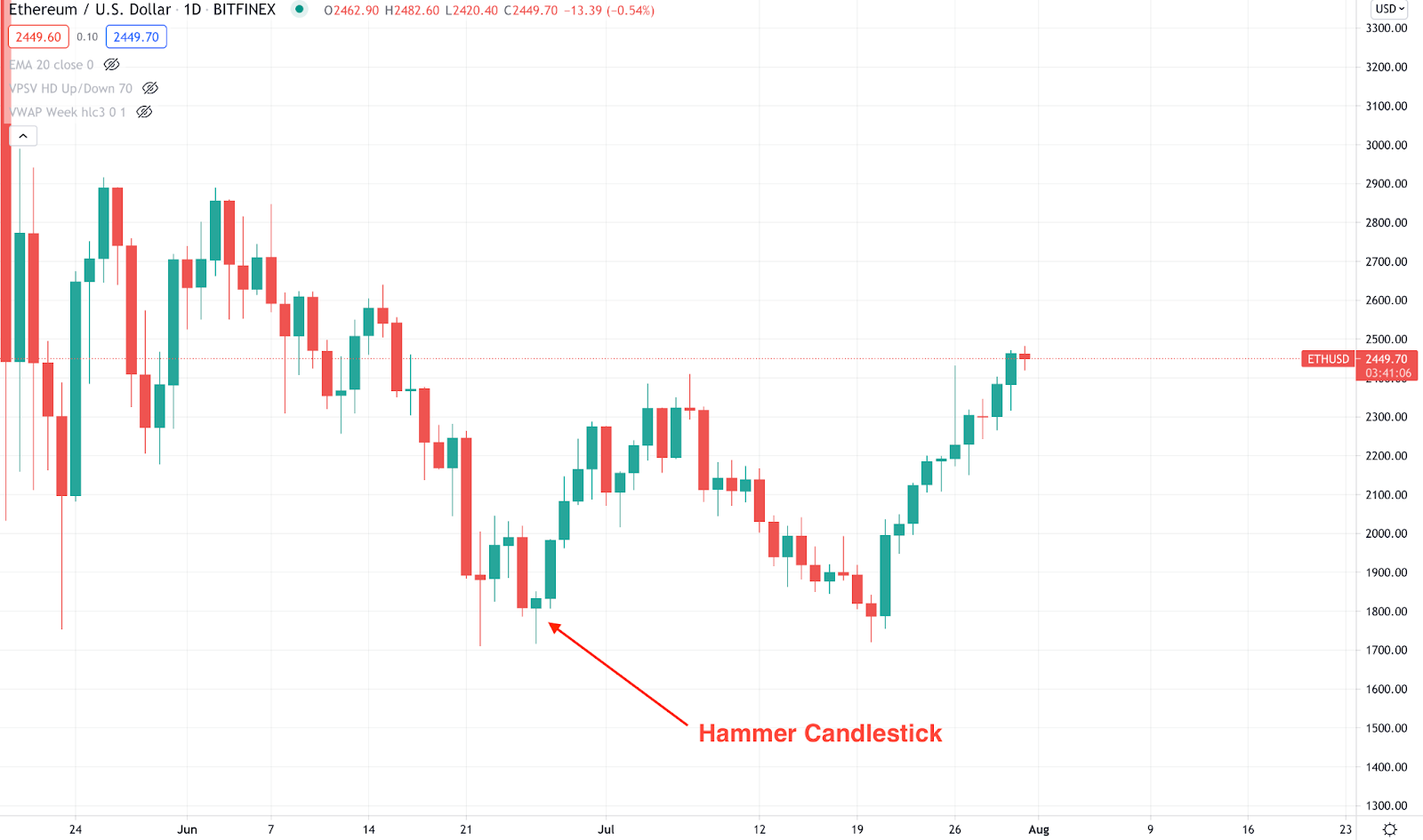 As soon as the price makes a new low, it shows the first sign of upcoming bullish pressure with an indecision candle. Later on, bears try to take the price lower but fail and close with a bullish hammer. 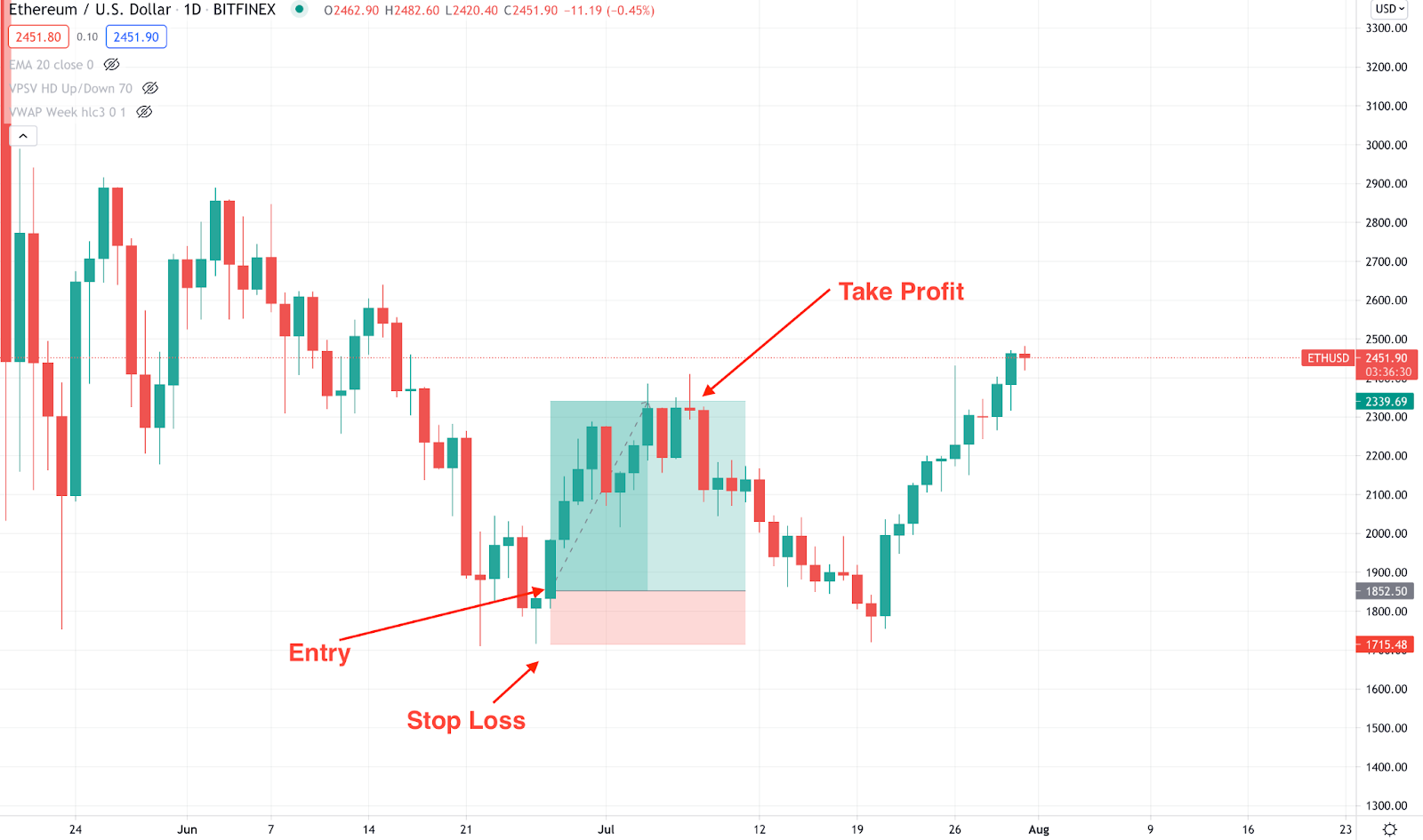 The ideal entry for this trading strategy is a buy stop order above the hammer’s high price, with a stop loss below the shadow with some buffer. In the above example, the trade closes with a 1:3.57 R:R as soon as a bearish pin bar appears at the resistance level.

Therefore, we’ll define the price trend using price action, and while making the trade, we’ll use the hammer candlestick as an additional confirmation to the bullish trend. 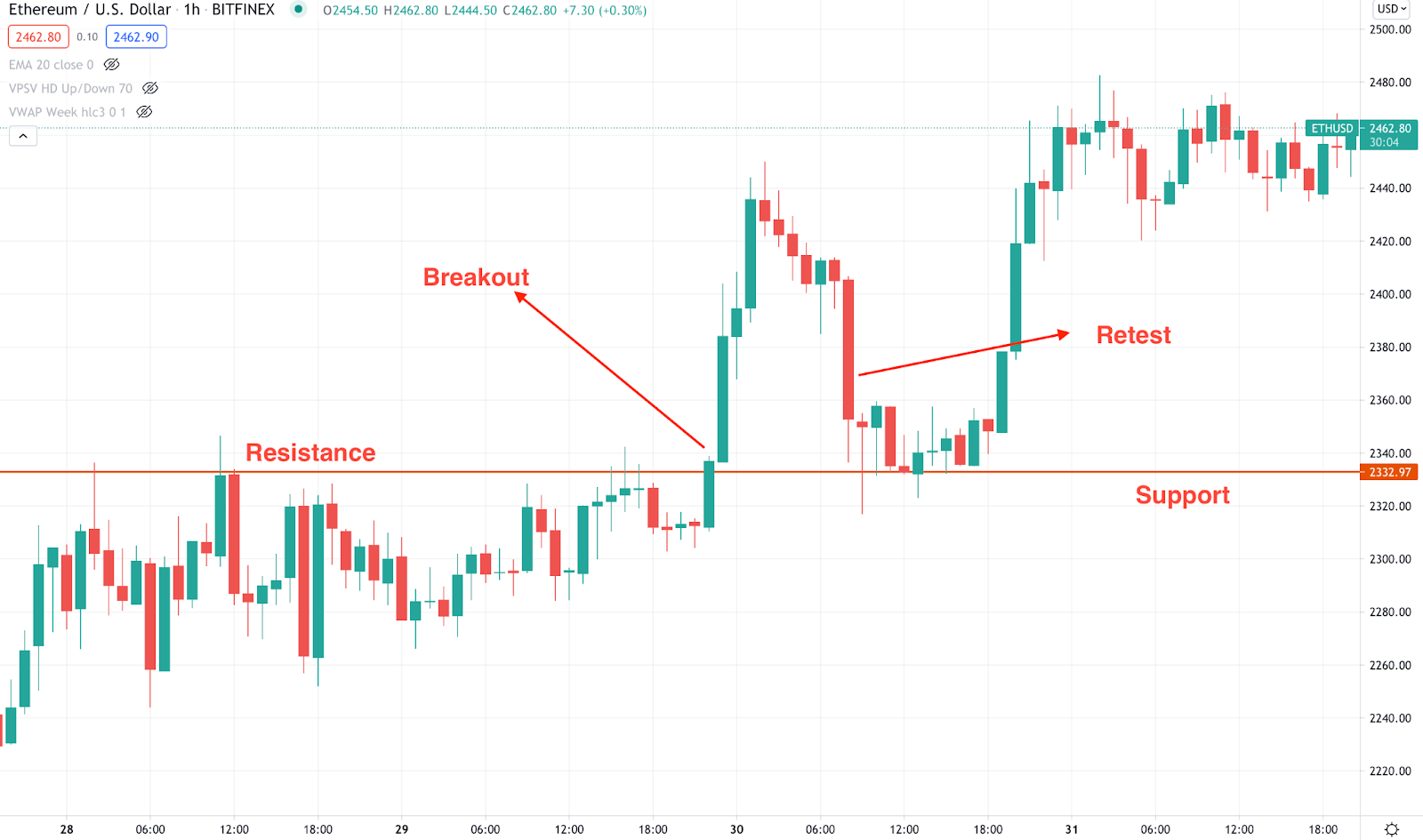 The above ETH intraday chart indicates $2,332.97 working as both support and resistance to the price. The price approaches the resistance and breaks this level with intense buying pressure. Later on, the price comes lower to the support level, where investors should wait for a confirmation to enter a buy. 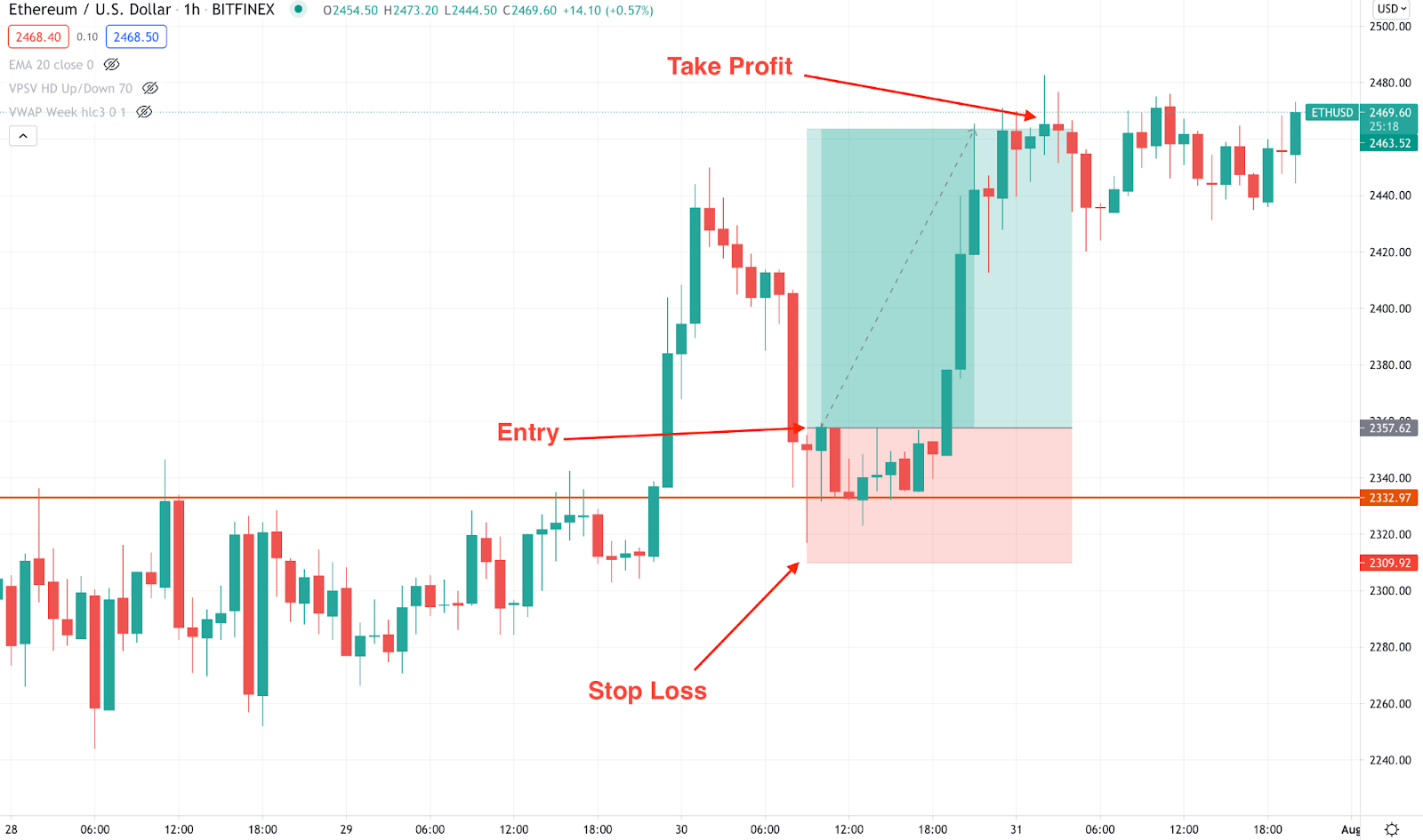 The buy position becomes valid as soon as a hammer candlestick appears at the support level — the stop loss below the shadow with some buffer. In the above example, the trade closes with a 1:2 R:R as soon as a pin bar appears at the resistance level.

This approach is straightforward and highly profitable if the price is within a trend. First, we have to identify that the overall market trend is bullish. Any bearish correction indicates sellers’ profit-taking, after which buying pressure may resume. 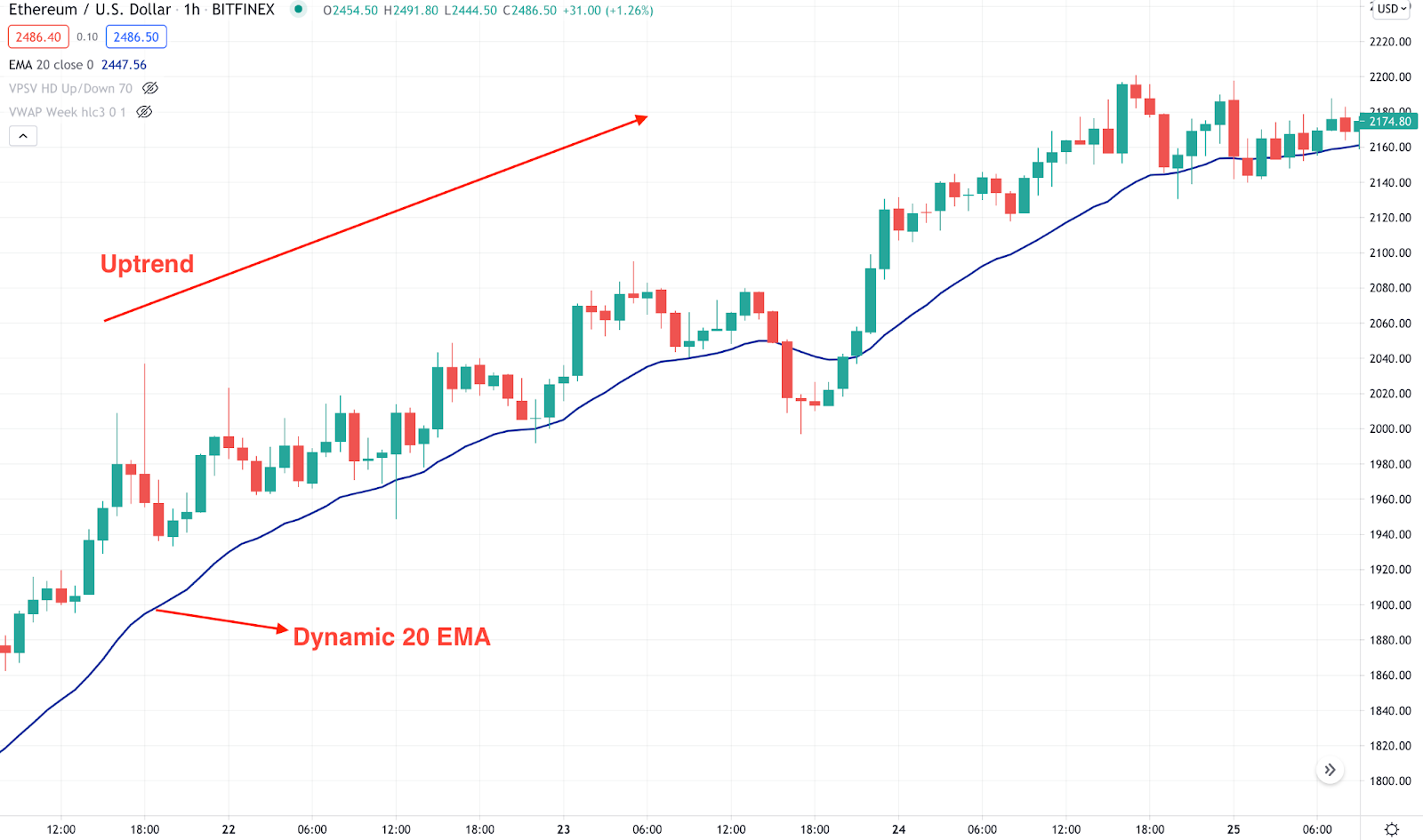 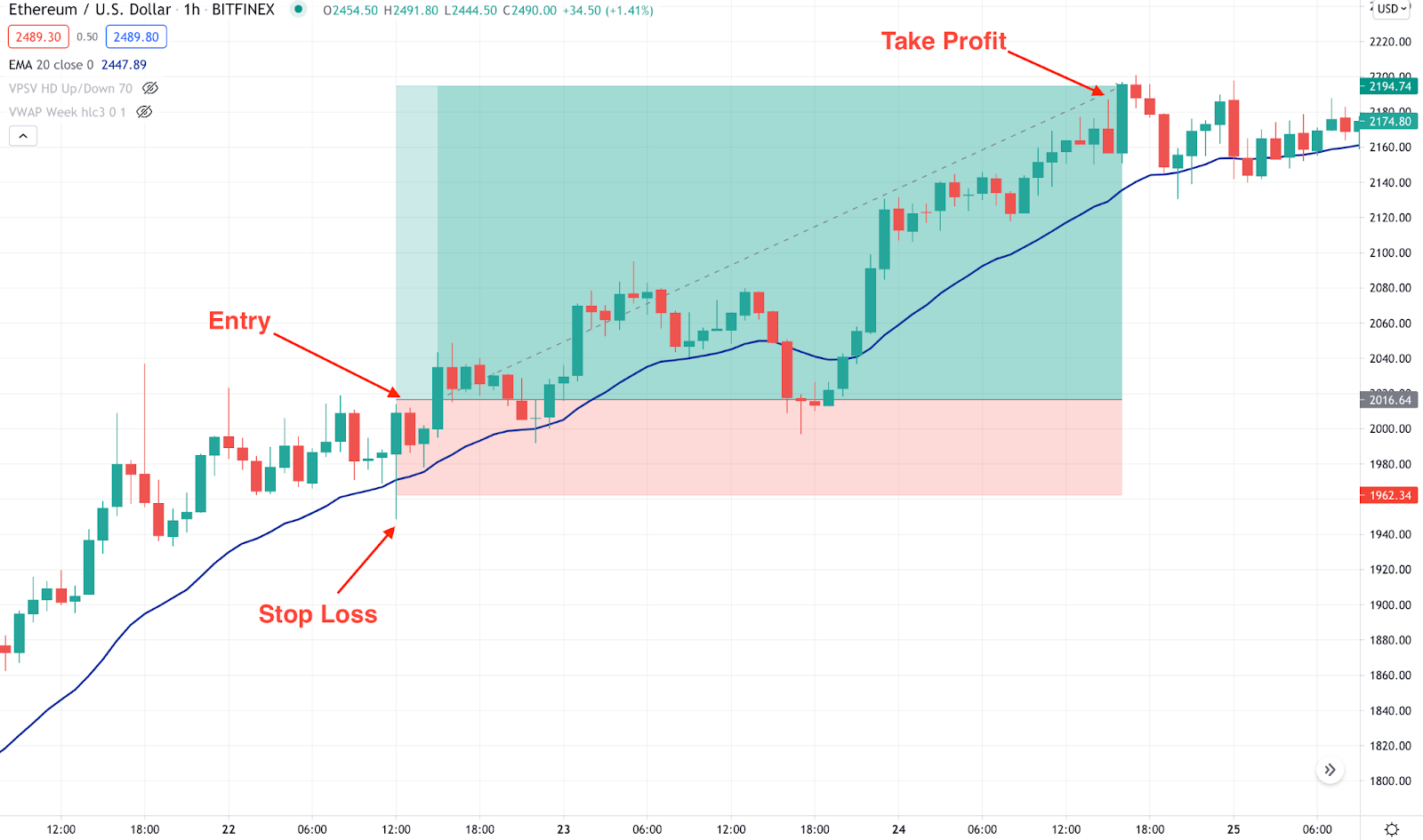 The buy position is valid from the hammer candlestick high, where the stop loss is below the shadow with some buffer. In the above example, the trade closes with a 1:2 R:R as soon as a pin bar appears at the resistance level.

Hammer vs. Doji: The Differences

After a long downtrend, a hammer shows a buying opportunity. So does the Doji. Let’s look at some differences between hammer and Doji.

The Pros and Cons of a Hammer Candlestick

Every candlestick has some strengths and weaknesses. No trading tool can guarantee you a 100% profit within any financial market. The hammer is a single candlestick pattern that needs additional confirmation to confirm its validity. Let’s look at its pros and cons.

The Limitations of the Hammer Candlestick

Although the hammer is a profitable indicator, it has some limitations that a trader should know before using it.

The hammer candlestick indicates buyers regaining the momentum after an asset makes a new low. However, the buyers’ strength at the end of the day might be a sellers’ retracement. Look at the image below. 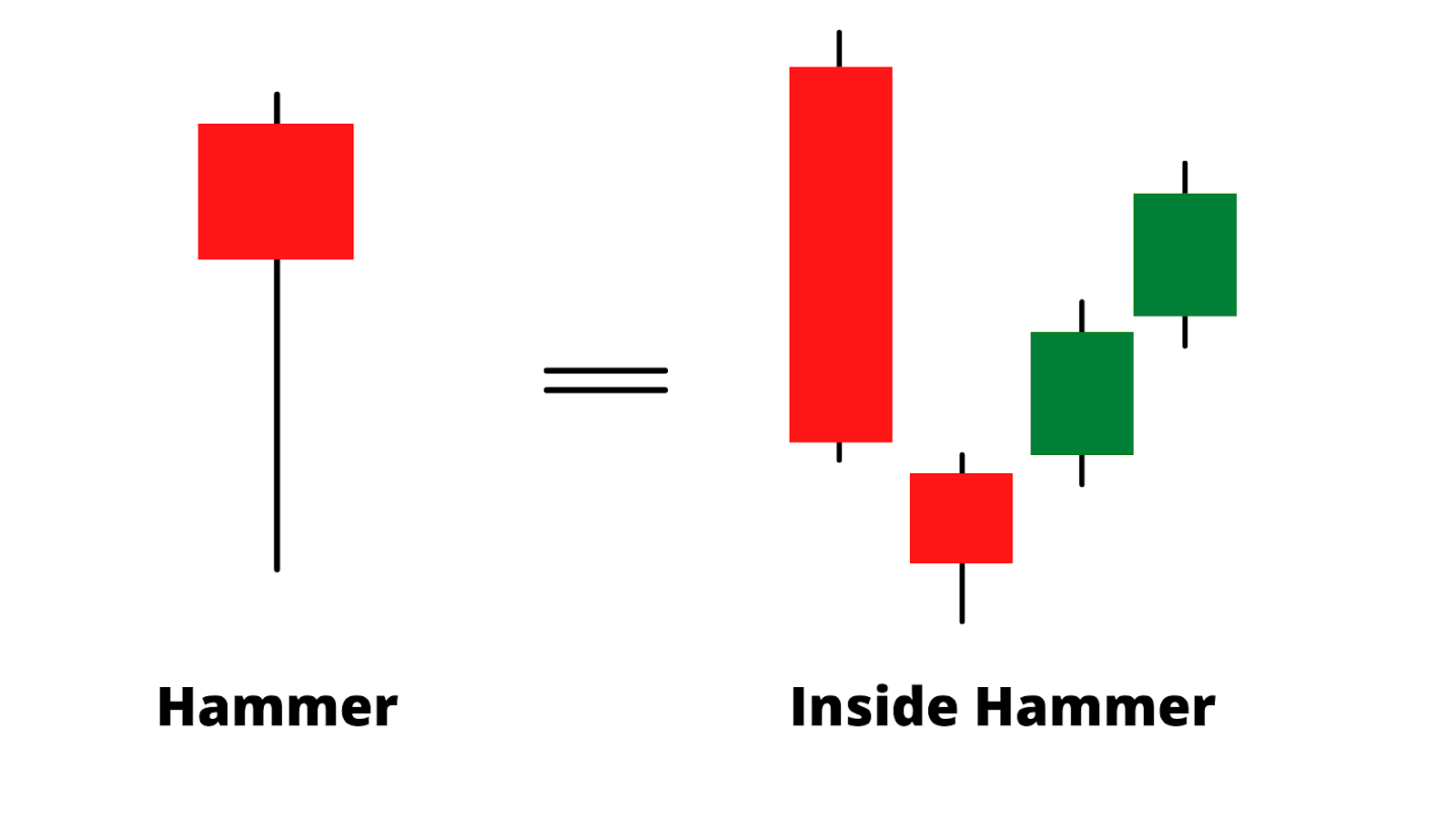 Here we see a large sell candle appearing, after which the price moves up with a correction. Therefore, when using the hammer trading strategy, monitor the speed of the retracement. A quick rebound is a sign of reversal, while a correction may lead to more selling pressure on the next day.

The placement of the hammer candlestick is also essential. If you’re a price action trader and want to make a buy trade from every hammer pattern you see in the chart, you might make incorrect decisions. A hammer is solid if found at the bottom of a trend. However, finding a bottom is not an easy task. You can spot it by looking at the price chart. Moreover, you can use other indicators, like the RSI or stochastic oscillator. If these indicators support the hammer, you can consider its indication reliable.

In this trading guide, we’ve learned:

If you’re a cryptocurrency trader, always follow strong money management rules and use other indicators while using the hammer. A good understanding of the market context is important to create an optimal trading strategy. Make sure to build a trading strategy using multiple trading tools that have good track records. Of course, there are plenty of candlestick patterns, always find the best that suits you the most.