Cup and Handle Chart Pattern: How To Use It in Crypto Trading

The cup and handle indicator is a technical pattern found on crypto price charts. It indicates the correction of a previous uptrend and eventually signals its resumption. The pattern exhibits clearly defined entry and risk levels but can be difficult to interpret in crypto markets due to fragmented volume metrics.

This trading guide explains the importance of the patterns and how you can formulate a strategic trading style to make the best out of it. We’ll be discussing the ins and outs of the indicator and to help you understand some of the limitations.

What Is a Cup and Handle Pattern?

A cup and handle pattern is a consolidation chart pattern signaling bullish in which prices correct a portion of a previous uptrend, then rebound back toward the previous high, forming the “cup.” Prices then trade sideways, creating the “handle” which, when completed, signals a breakout to new highs.

The pattern was popularized by William O’Neil in his 1988 book, How to Make Money in Stocks. I learned to trade stocks 20 years ago using his methods, including the cup and handle pattern. This pattern is found a lot in the stock market and is beginning to appear frequently within the crypto market.

The cup and handle pattern can be found within a variety of time frames, from hourly, weekly to monthly charts. However, it is more powerful on daily chart time frames. There are a couple of variations of the pattern, but they all have a similar look.

Characteristics of the Cup and Handle Pattern

The cup and handle pattern appears after a big rally where the market needs to pause and catch its breath. The pattern consists of five key components, which then lead to a breakout higher.

The first four components help shape the structure for the pattern’s name because they form the outline of a cup with a handle. 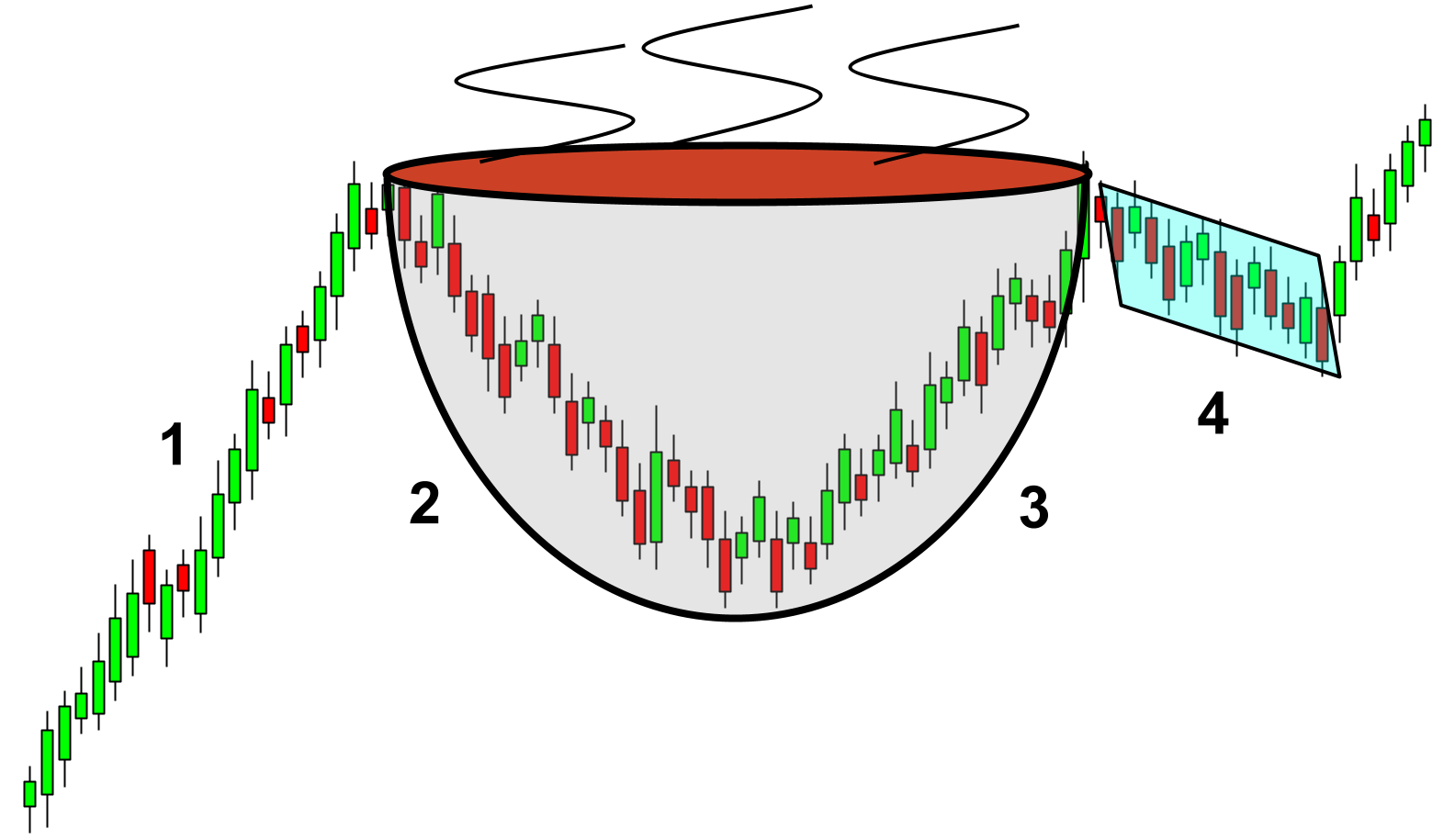 After a big uptrend in price (#1), the market begins to correct lower (#2), shaping the first half of the cup. The dip in #2 generally retraces about 30–50% of the length of the previous uptrend. However, there are instances where a deeper correction may take hold. Once a bottom is formed, prices will begin to rally (#3). This rally pauses within 10% of the previous high. At this point, the cup portion of the pattern has been created.

Now that prices are near their old high, bullish traders stop buying and wait to see if a breakout takes place. Traders who bought near the old high are thankful and nervous at the same time. They are thankful that prices have rebounded back to the old high, but nervous about another selloff. They are considered weak hands. Hence, selling the asset gradually, creating the handle (#4).

However, the total volume begins to decrease as the market is running out of sellers. The price trend is from sideways to slightly lower, and it carves the handle of the pattern.

In the end, the pattern takes the shape of a coffee cup with a handle on the right side.

The pattern is confirmed when prices break above the high of the handle as the previous uptrend continues.

The cup and handle pattern cannot exist without a prior uptrend. As a result, the pattern is found frequently within the crypto market.

There are a couple of variations to this pattern that crypto traders need to be aware of. First, there are times when the handle portion of the pattern develops above the old high. This is considered the “high handle.” Secondly, since the market is fractal, these patterns will form on a variety of charting time frames, including intraday charts.

One of the characteristics of the cup and handle pattern is that the handle must form within 10% of the old high. There are times when the market is extremely bullish and the handle pushes slightly above the old high but remains within 10% of it. These situations are considered to have a high handle. 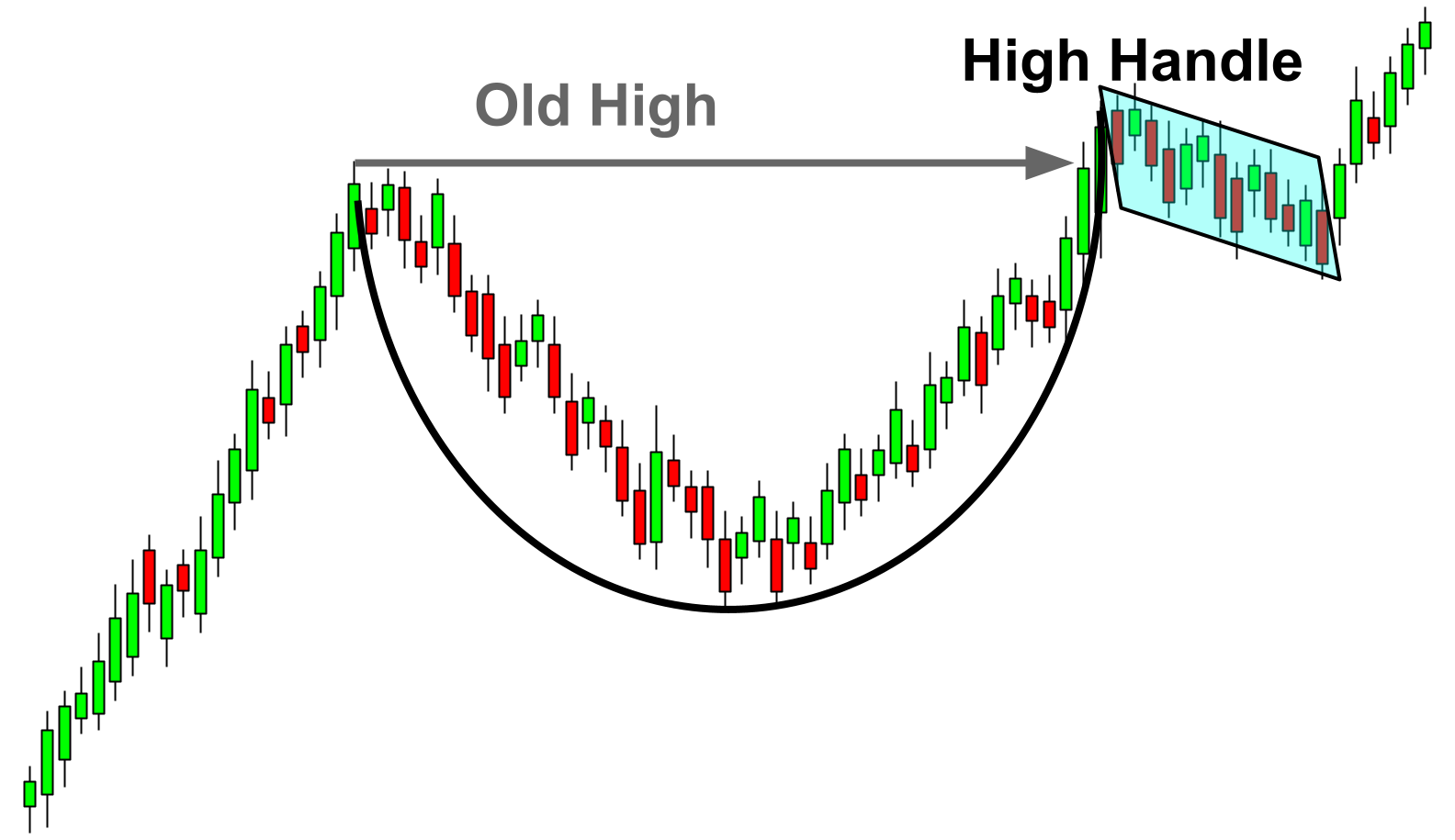 In the above example, we see a cup with a high handle. The handle forms above the old high, rather than below. The result of the pattern remains the same where it is a minor breakout higher, but then prices trade sideways on declining volume to form the handle. The pattern is confirmed when the market breaks above the highest price of the handle. 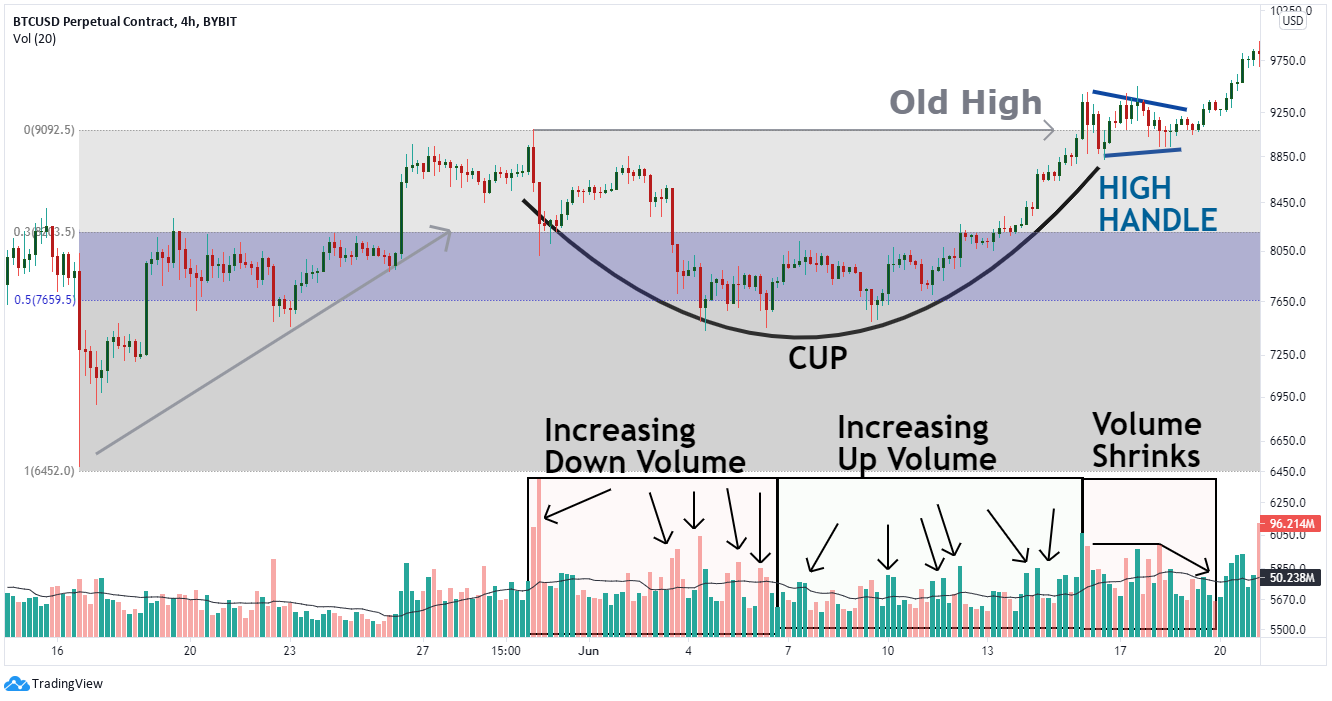 The intraday pattern operates similarly but concludes more quickly. In the Bitcoin example above, we are using a 4-hour chart. All of the necessary ingredients are present, including the volume spikes. During the retracement portion, you want to see increasing down in volume. On the rally portion of the cup, you want to see increasing volume. Then, during the formation of the handle, trading volume will ideally shrink as both buyers and sellers are shaken out.

The Bitcoin chart above also illustrates a high handle, which we discussed in the previous section. After the successful cup and handle portion of the chart, Bitcoin breaks out and accelerates higher.

The inverted cup is the reversal pattern indicating a momentum sell short signal signaling a bearish continuation pattern. The chart patterns happen within a span of three to six months and volume plays a role in the completion of the pattern and the confirmation of the breakout from an uptrend. At the same time, the inverted cup top is formed when there are more sellers bidding for the price to go down. When it happens, it indicates the end of the bull markets.

The inverted handle pattern forms when the asset emerges out and begins to fall from the right side of an inverted cup. However, a true inverted handle happens when it fails to break down and finally meets the support level and attempts to break to a newer low.

To spot a true inverted cup and handle pattern, the shape needs to be obvious and the trend line needs to curve up and then down like an upside-down cup. When this reversal pattern happens, it tells you that it is not a good probability to trade if pullback or correction is not on the way.

How To Identify the Cup and Handle Pattern

The cup and handle pattern starts with an uptrend, followed by a 30–50% correction. Use the Fibonacci retracement tool to measure out the previous uptrend, then look for the correction to retrace near the 30–50% zone. 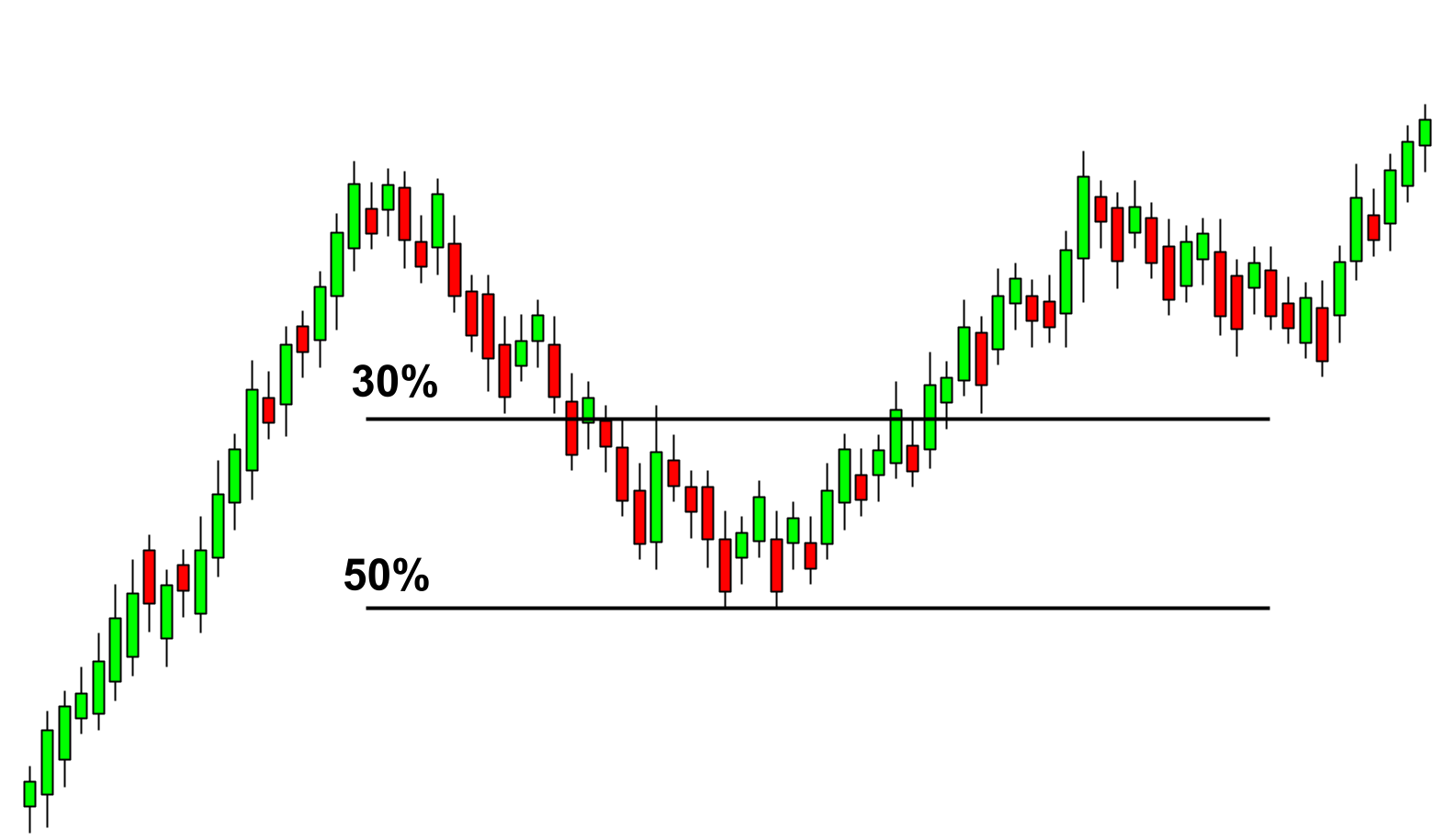 After the market has retracted into the 30–50% zone, look for a rally to begin pressing prices back toward the old high. 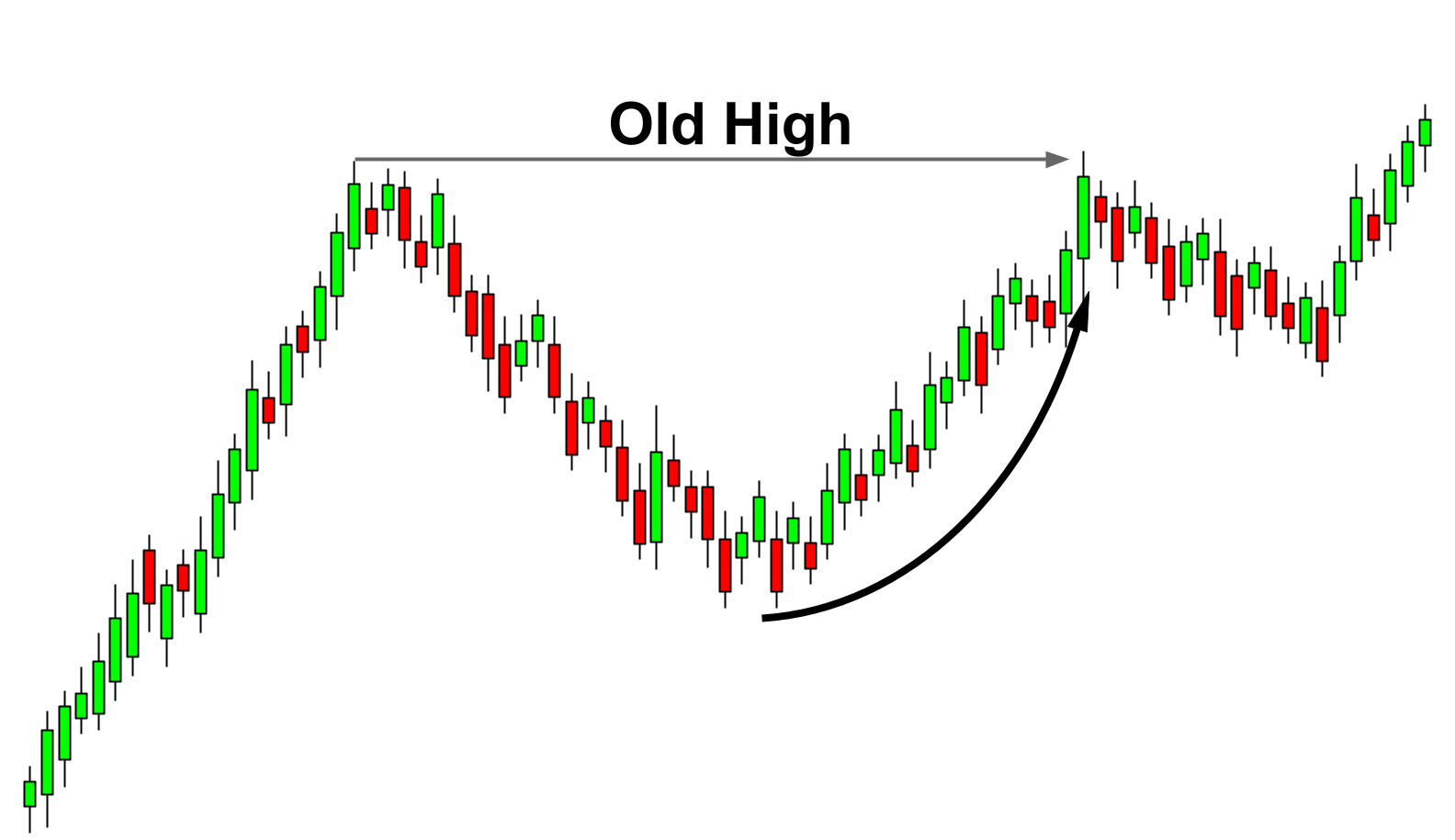 Both sets of buyers exit the market; as a result of this entrapment, these buyers are nervous and slowly sell out, creating the handle of the pattern. 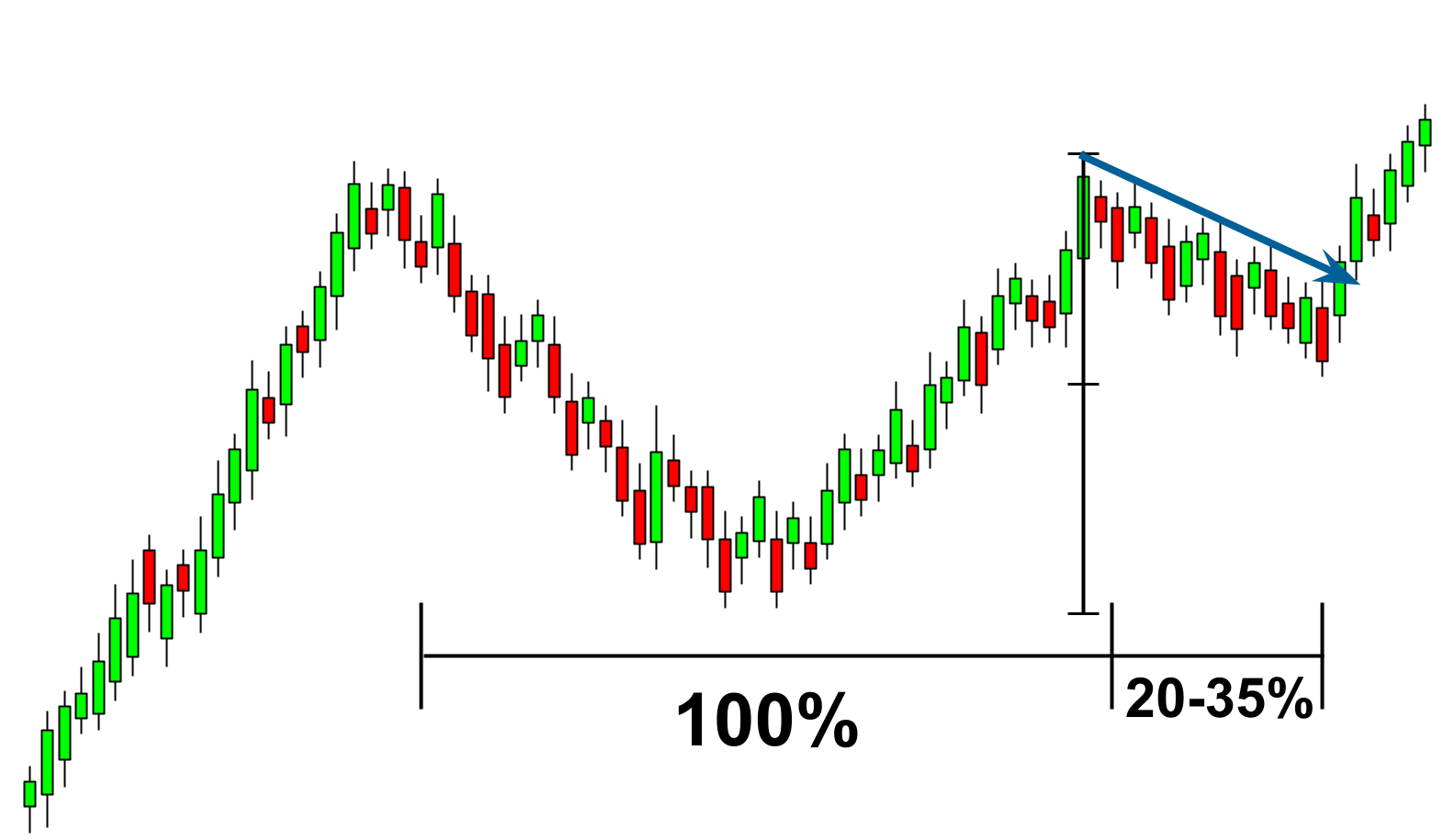 An effective handle will drift lower, rather than trend lower. This sows doubt among short-sellers, who become nervous about the failed trend to the downside. As a result, they close out their positions, which adds a little buying pressure to the market, popping the price a little.

Then, new buyers enter the market as they see the technical setup complete, pushing the market above prior highs. This adds even more strength to the bullish trend.

How To Use the Cup and Handle Pattern

The cup and handle pattern is an effective combination to flush out weak holders.

To trade the cup and handle pattern, wait for technical levels of resistance to break. There are two areas where traders can buy the resistance break. 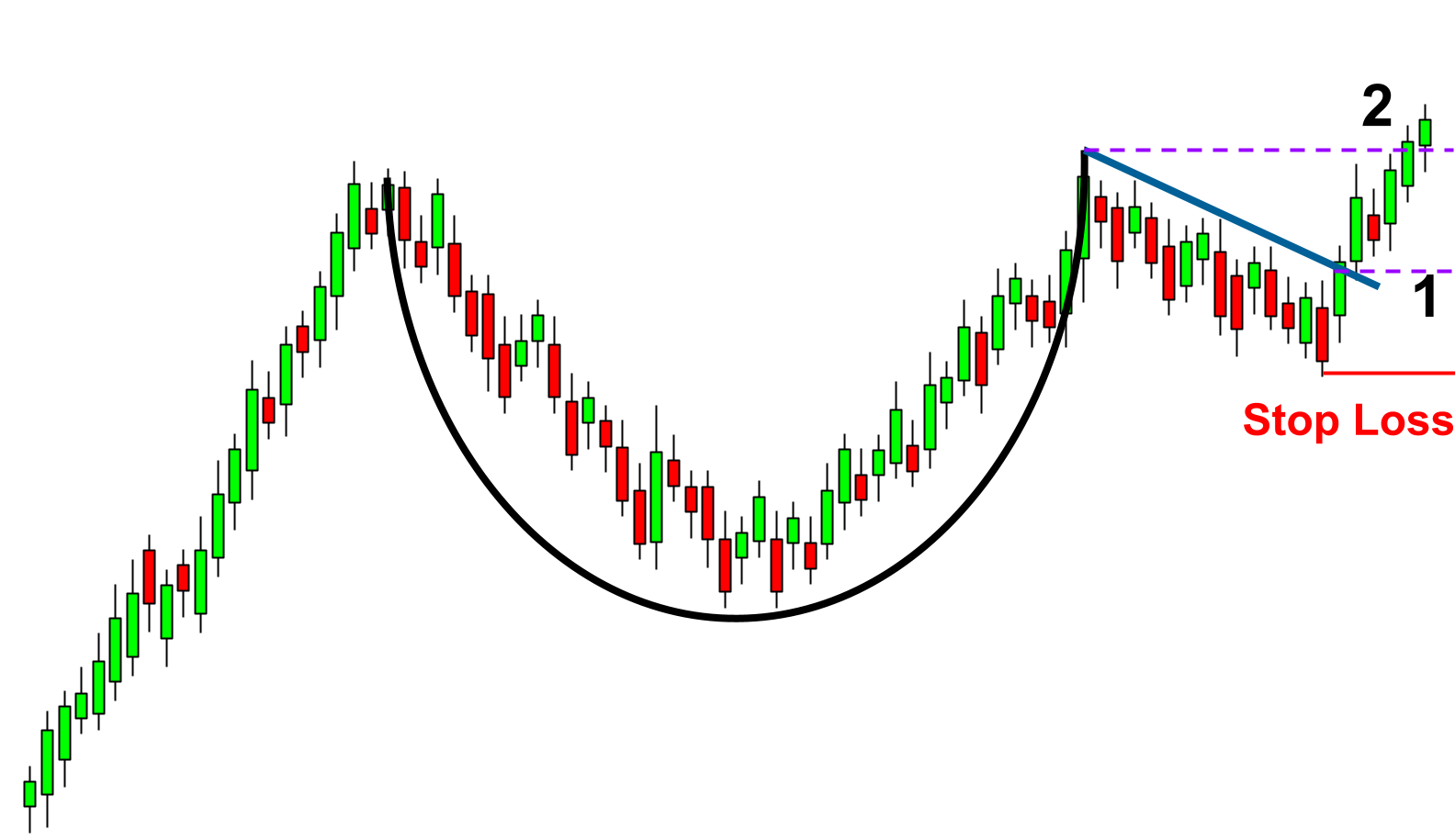 The risk and stop loss on the trade will be set at the low of the handle. This way, if the breakout fails and falls back below the handle’s low, then you can close out the trade at a small loss and move on to the next opportunity.

If the breakout is successful, then you can consider moving your stop loss to the breakeven level, locking in the trade without experiencing a loss. 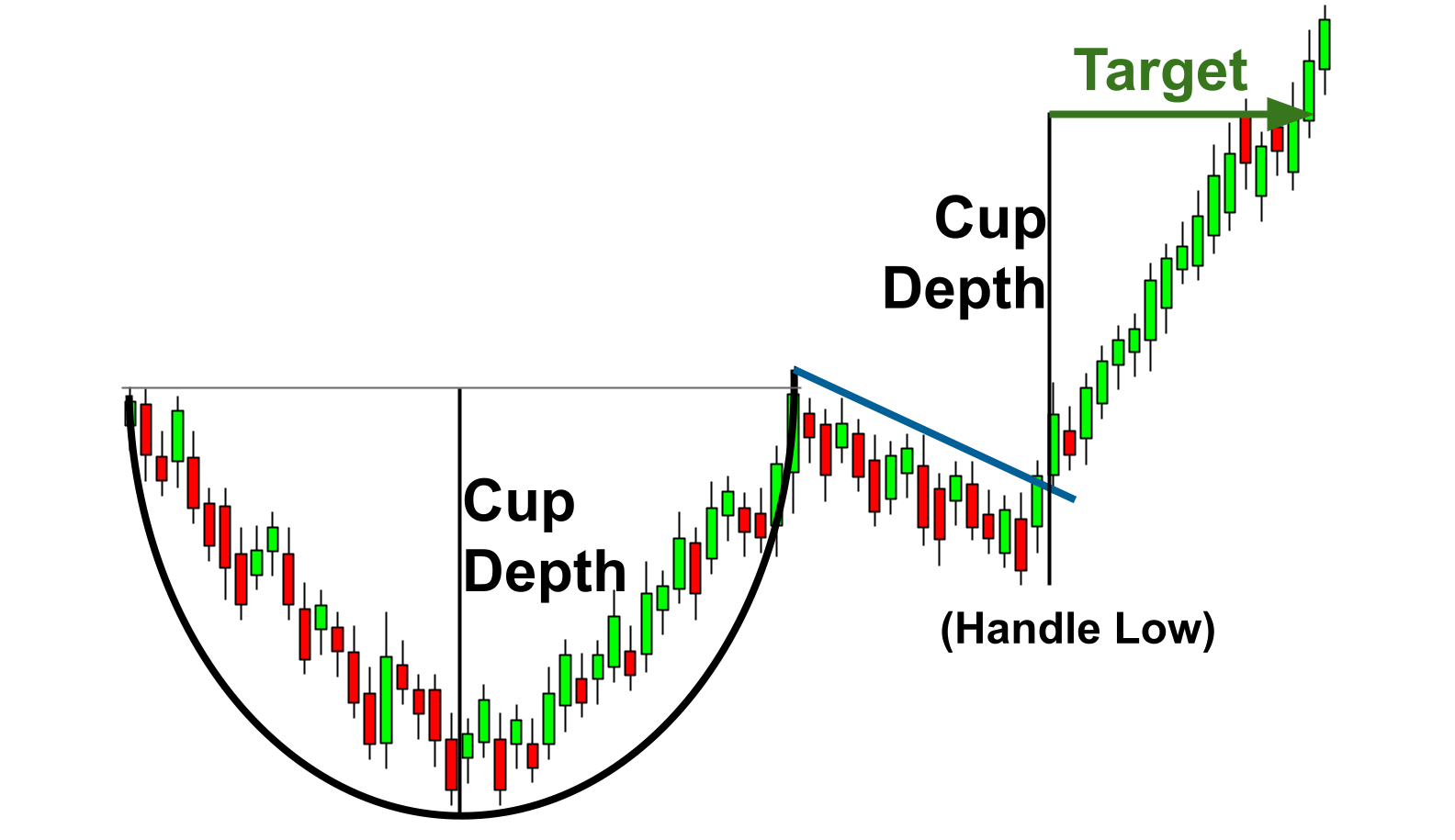 The target for the cup and handle pattern is fairly simple. Measure the distance from the cup high to the cup low and project that same distance beginning at the handle’s low point. So long as the handle remains in the upper half of the cup, this level of price projection leads to an attractive risk-to-reward ratio on the trade.

Here is an example of the cup and handle pattern in a Bitcoin chart from 2019. 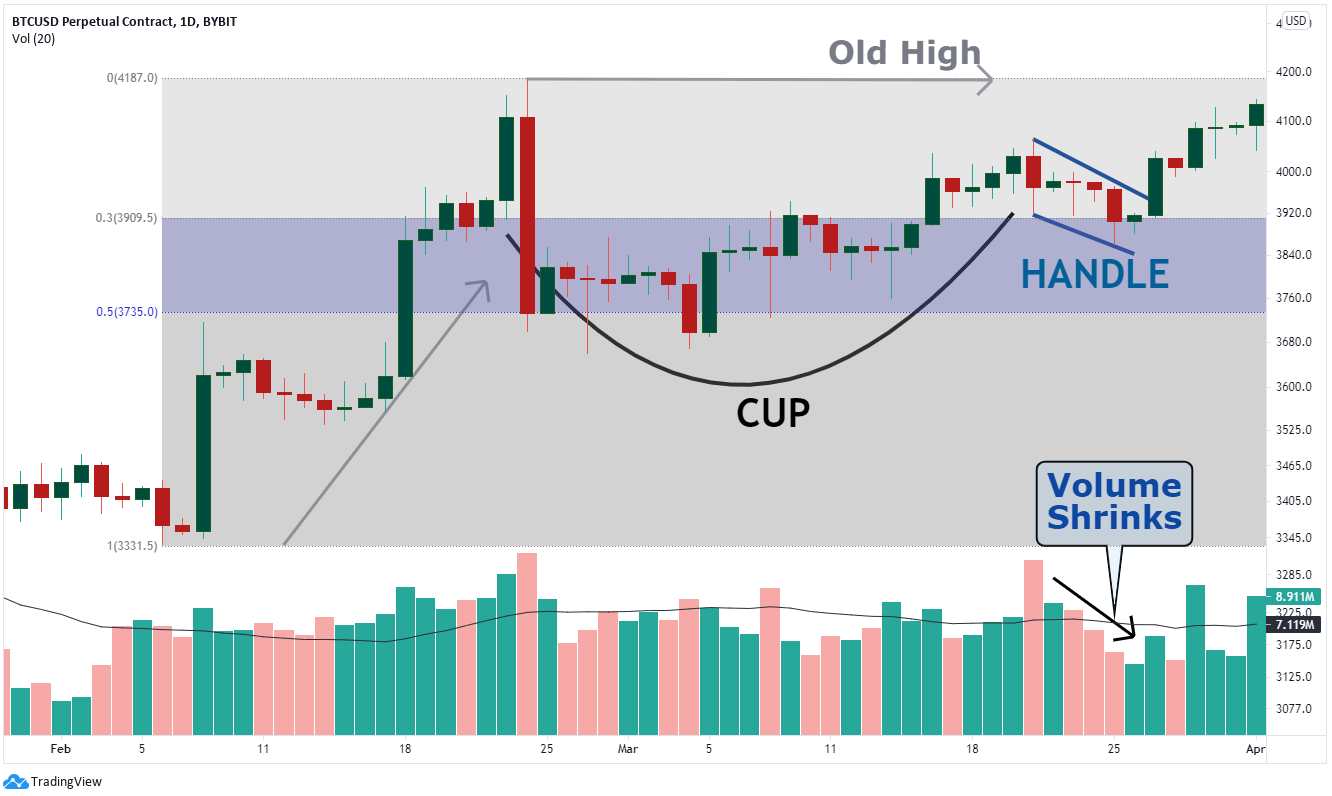 After rallying 25%, the market corrected lower approximately 50% on increasing bearish volume. Then, the market rallied to come within 3% of the previous high.

At that point, the cup of the pattern was completed and the handle was about to begin. The handle drifted lower on decreasing trading volume. The pricing of the handle remained within the upper portion of the cup, so all of the necessary ingredients were present for a bullish breakout.

Once the handle was finished, Bitcoin rallied higher on increasing volume, which led to new highs.

Below is another chart, a cup and handle example for Ethereum. 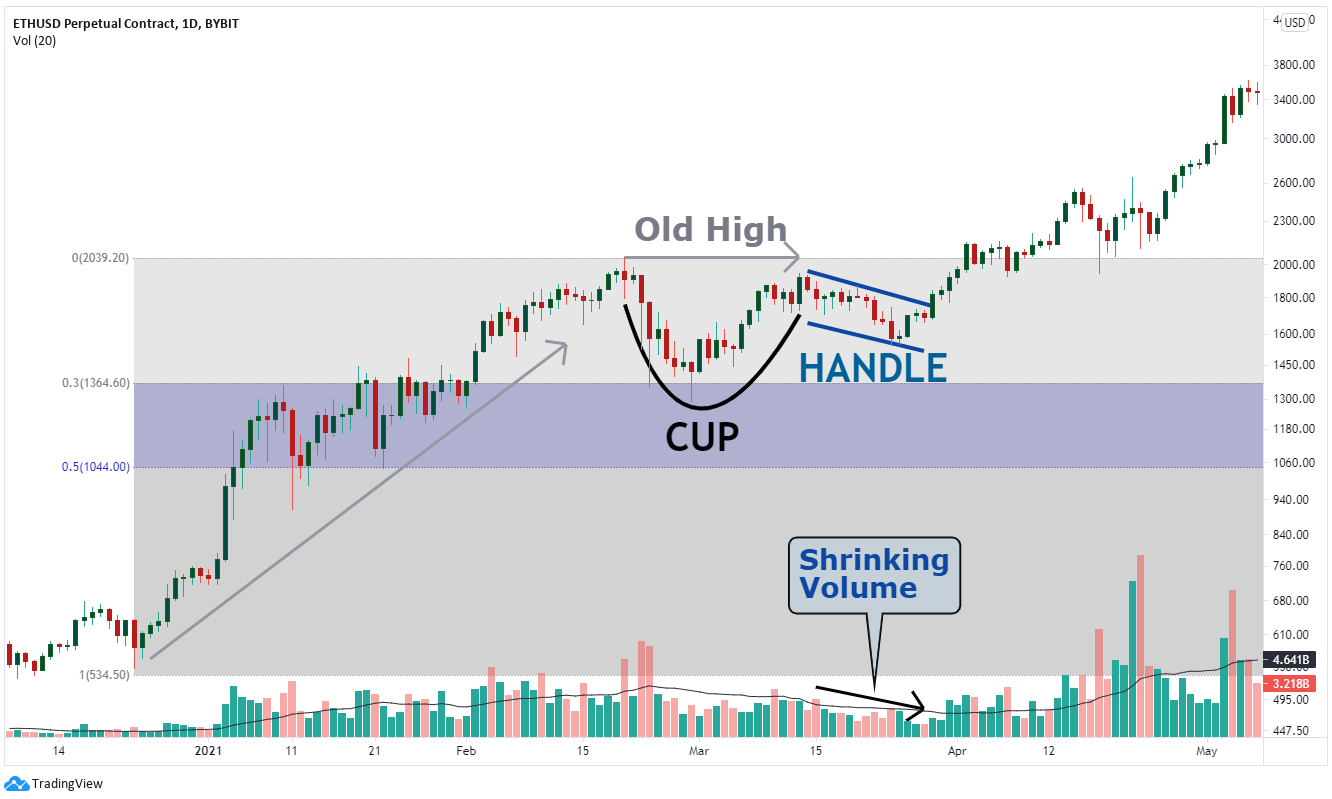 After rallying 300% to begin 2021, Ethereum began consolidating the uptrend to form the cup. The cup was relatively shallow, at nearly 30% of the previous uptrend. After correcting, the price rallied back to near the old high to finalize the cup.

As the handle began to develop, its slight downward slope, coupled with decreasing trading volume, was a big clue that this may be a minor consolidation. This was a relatively long handle, but once it had finished, Ethereum rallied on increasing volume.

Indicators To Identify the Cup and Handle Pattern

Aside from having a clearly defined pattern with specific entry and exit parameters, this chart pattern is a favorite among traders because it is simple to identify. There aren’t a lot of fancy indicators or technical tools needed to spot the pattern.

There are only four technical indicators needed to help you identify the pattern:

As you know by now, the pattern consists of two parts, the cup plus the handle. The pattern cannot be anticipated until nearly all of the cup is completed and the price is near the old high.

As a result, the trader will need to highlight the old high with a horizontal resistance line. Additionally, as the right side of the cup is created, we need to observe several bullish candles on rising trade volume. An easy way to figure this out is to place a 50-period moving average on top of the volume.

Limitations of the Cup and Handle Pattern

Like any form of pattern and technical analysis, there are times when this predictor works well and other times when the forecast does not work out. There are situations when the reliability of the cup and handle pattern is diminished.

Apply the Cup and Handle Pattern to Large and Growing Cryptocurrencies

The trading volume of a crypto asset makes a difference in determining a cup and handle pattern. However, crypto trading takes place on many different exchanges — and even off the exchange. Therefore, arriving at an accurate volume figure is extremely difficult.