Bear Pennant: How to Trade with a Bearish Chart Pattern

A bear pennant is a technical analysis pattern that can help you spot strong downtrends in crypto. Crypto traders enjoy bearish pennant patterns because they’re easy to spot and, once identified, can tip you off to long and deep corrections. As a result, the pattern can also help you spot false bottoms.

What Is a Bear Pennant?

A bear pennant is a chart trading continuation pattern in which, after a strong move lower, prices pause and consolidate briefly, then break down further, resuming the larger correction. The pattern gets its name from the consolidation, which often looks like a pennant as prices wedge together before breaking down further. The bear pennant pattern is the opposite of the bull pennant chart pattern. 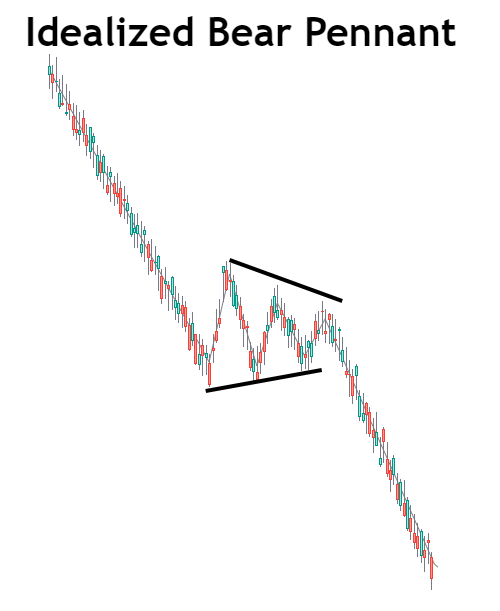 A bear pennant is formed when a cryptocurrency falls significantly, yet buyers believe it’s not inexpensive enough yet. The buyers hold out and don’t buy. The traders who are short become nervous and exit the position by buying it back. As a result, the crypto’s price increases a little, but on weak volume.

Over time, the volume during this consolidation period tends to be weak. The cryptocurrency seems to mindlessly bounce within a range, making no progress. After a short period of time, the buybacks cease and the trading volume tends to fall as the last traders are shaken out. When volume fades, the sellers show up again and continue to push the market lower, resuming its downtrend. 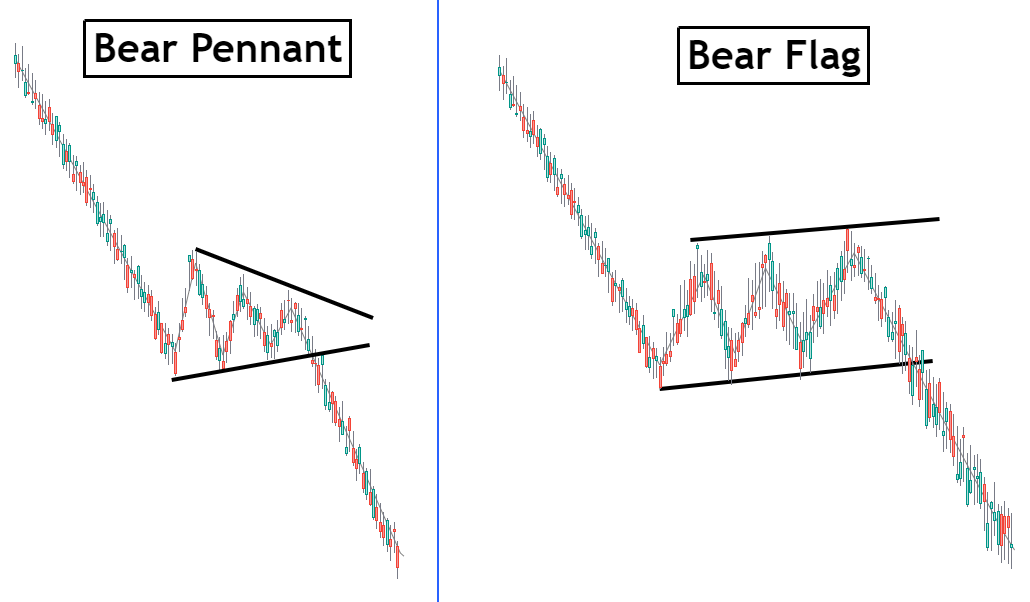 A bear pennant has a lot of similarities to a bear flag in technical analysis. Both patterns are consolidating a downtrend, which then leads to a further break lower in price. However, there’s a slight difference in their shape. The bear flag has a rectangular look in the consolidation phase, while the bear pennant resembles a triangle.

Analysts debate whether the bear pennant or bear flag is the more powerful pattern. On the one hand, the triangular shape of the bear pennant suggests there are hardly any buyers in the market, which tends to lead to shorter consolidation periods. On the other hand, the rectangular shape of the bear flag is effective at “faking out” potential buyers, trapping them into selling as the downtrend picks up momentum.

The debate will continue, but make no mistake: both patterns point to strong bearish downtrends coming.

There are three phases to a bear pennant. The crypto market will experience a large, strong and deep correction. Oftentimes, the correction will appear relentless, as if it won’t stop (point 1 in the below diagram).

Then, all of a sudden, the downtrend stops, and a small rally begins to develop. Unfortunately, the rally doesn’t have a lot of strength or volume to sustain it and quickly fades away. At this point, the rally has retraced less than 1/3 of the decline, and definitely remains in the lower half of the original decline (point 2).

The short-term rally soon fades to another correction. The decline is as weak as the rally and the cryptocurrency begins to trade in a sideways range. There’s one distinctive feature of this sideways movement: the upper and lower boundaries of the range become compressed as time passes. When you draw trend lines along the outer edges of the consolidation, they converge to form the shape of a contracting triangle (point 3). 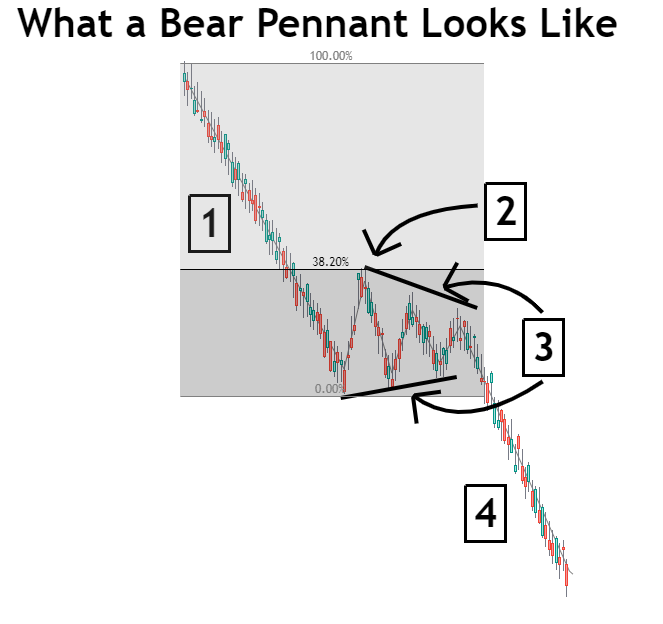 This triangle is critical to defining the pattern, which leads to a strong continuation lower. During this consolidation, trading volume contracts as well. The fight between the bulls and the bears looks more like a truce: both bulls and bears simply don’t show up anymore and stick with their positions as the consolidation drags on. At this point, the pattern looks like a triangle on the bottom of a stick, and the bearish trade is set up.

Eventually, the consolidation leads to a breakout lower as the sellers come back in full force, just as strong as they were in the initial correction (point 4). This is partly due to the buyers who thought they were buying cheaply: now, they have to turn around and sell in a strong down-trending market. The imbalance of sellers versus buyers is so large that price readjusts rapidly lower. Sometimes, the length of the secondary downtrend can be as large as the first correction, where the consolidation marks the midpoint of the entire decline.

Indicators to Confirm a Bear Pennant

The best indicators to confirm a bear pennant are its shape, as well as where the pattern forms within the previous downtrend. There are some additional indicators that can be used to help confirm the bear pennant, but those indications may not be the most accurate. A correct bear pennant pattern should have a contracting triangle shape rather than a rectangle shape.

We previously discussed how the shape of the bear pennant must be a triangle at the bottom of a stick. The triangle portion of this pattern has to appear in the lower half of the stick, most likely within the lower third of it.

The duration of the triangle will be brief, as the market is getting ready to unload in a deeper correction.

Volume can provide a big clue about the validity of the bear pennant pattern. Usually, the initial decline occurs on a lot of trading volume. Then, as the cryptocurrency consolidates during the triangle pennant portion of the pattern, the volume will fall as both buyers and sellers stand aside. 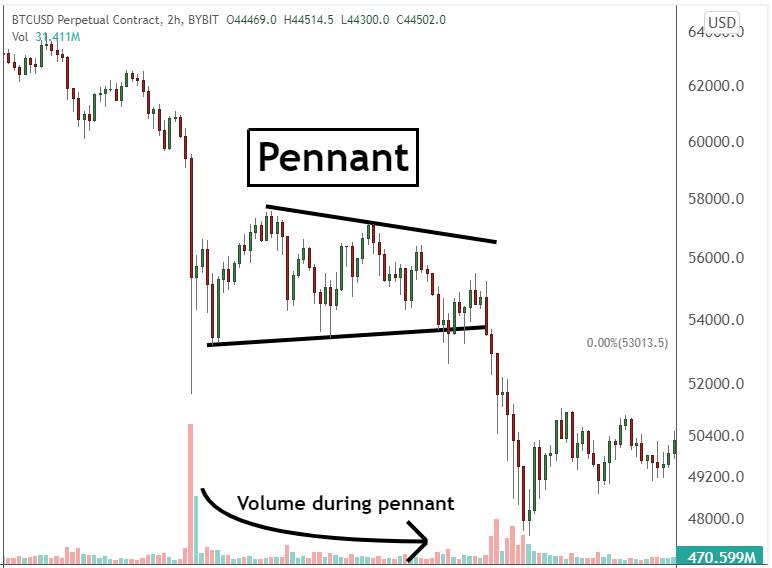 As the triangle completes, volume tends to pick up again as the market corrects towards much lower levels. Remember, trends tend to follow volume. Therefore, a consolidation on weakening volume suggests the rally is likely temporary, and will be completely retraced. 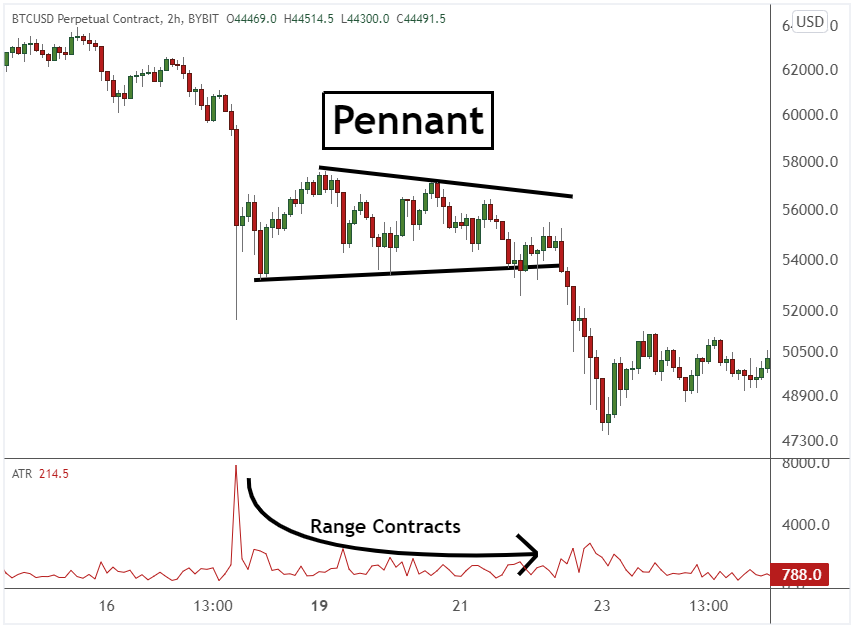 To determine if the range is expanding or contracting, add the average true range (ATR) indicator to the bottom of your charts with a one-period setting. If the subsequent line on the chart is rising, that indicates increased volatility. If the line is falling, it suggests decreasing volatility.

How to Trade with the Bear Pennant

Once you’ve identified a bear pennant, congratulations — because you’ve completed one of the toughest parts to trading the pattern. The subsequent trade can be rewarding, as the setup is quite simple and fairly straightforward.

Identifying a Bear Pennant Pattern on a Crypto Chart

After a long and steep rally, ETH topped in May 2021 and began to collapse. In about one week’s time, ETH corrected 25% to the low on May 16. This steep correction was the first phase of the bear pennant pattern. Let’s refer to the chart below. 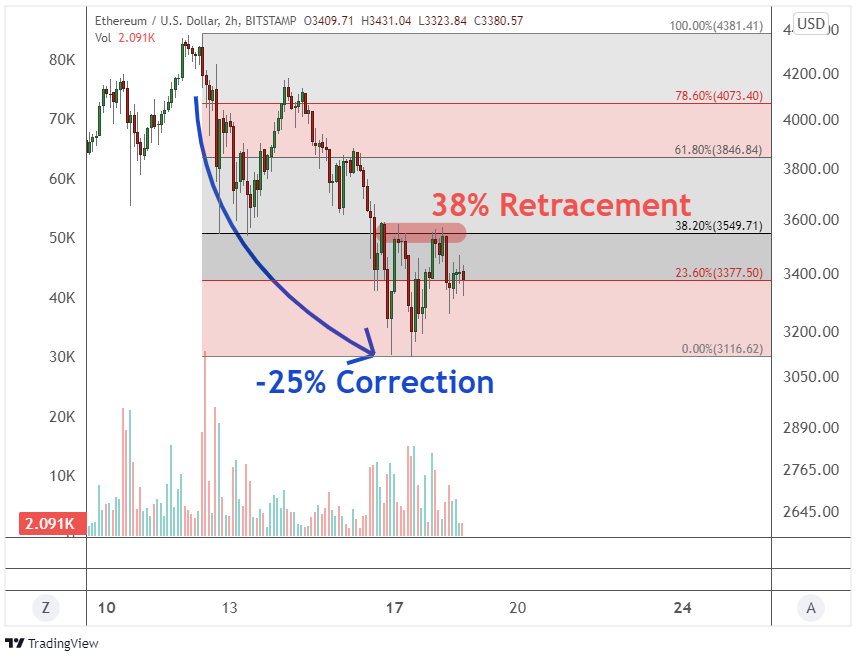 ETH then briefly rallied off the low, but the rally didn’t last long or extend very far. The ETH rally retraced 38% of the May downtrend, placing it in the lower portion of the sell-off. 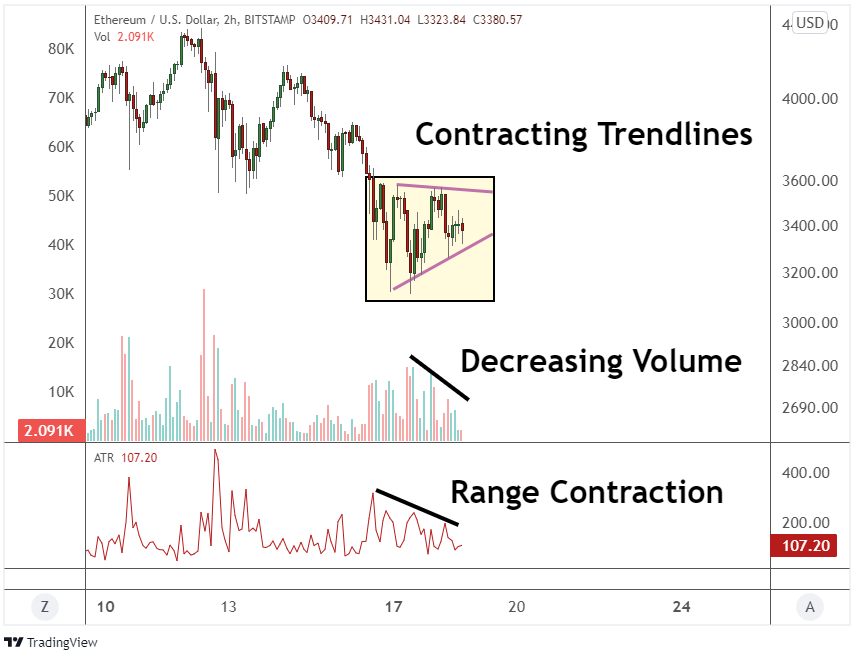 Ethereum begins to chop around sideways, making no progress either to the upside or downside. This sideways chop occurs on contracting volume. The candlestick ranges contract. The trend lines shaping the outer edges of the pattern contract, too.

This formation creates an ideal setup for a bear pennant trade.

After spotting the pattern, it’s time to plan the trade’s entry. 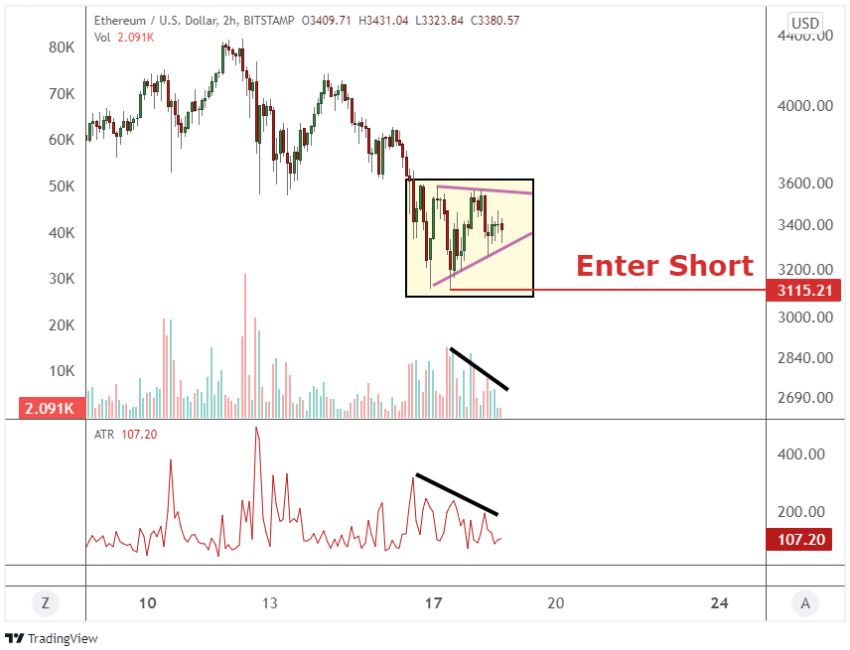 The easiest entry point is the lowest point of the pattern. Set an entry order to sell short if the market falls to new lows. Placing an entry at the pattern’s low point allows you to confirm that ETH is ready to trade to lower levels. If it does, you tend to see an explosion lower, leading to another large downtrend.

The stop loss will be placed above the pattern near the recent highs. 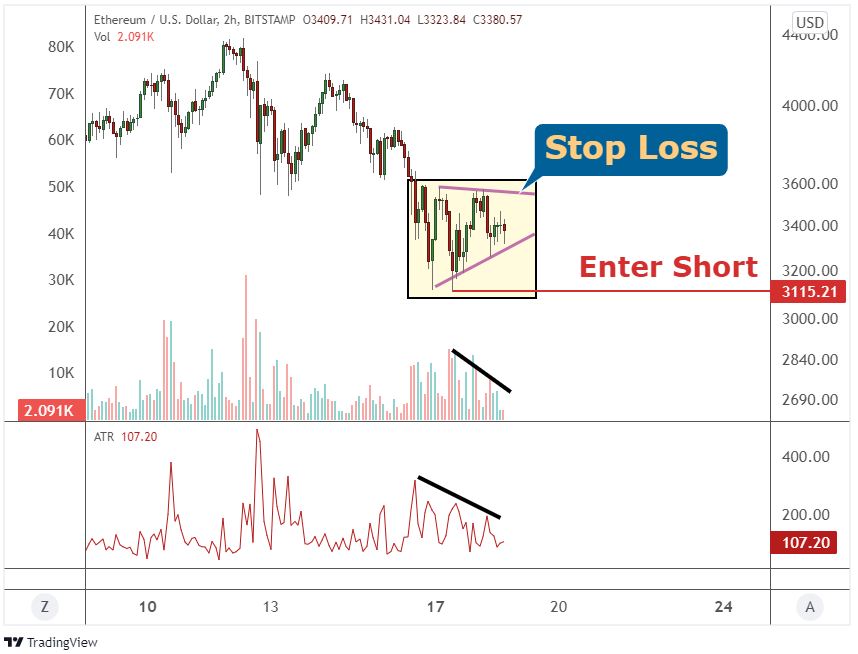 Knowing Where to Take Profit

On many occasions, the bear pennant is at about the halfway point of the decline. You can simply measure out the first decline, then project it at the end of the bear pennant near the last touch of the resistance trend line. The Fibonacci extension tool is very handy for helping you measure out situations like these. 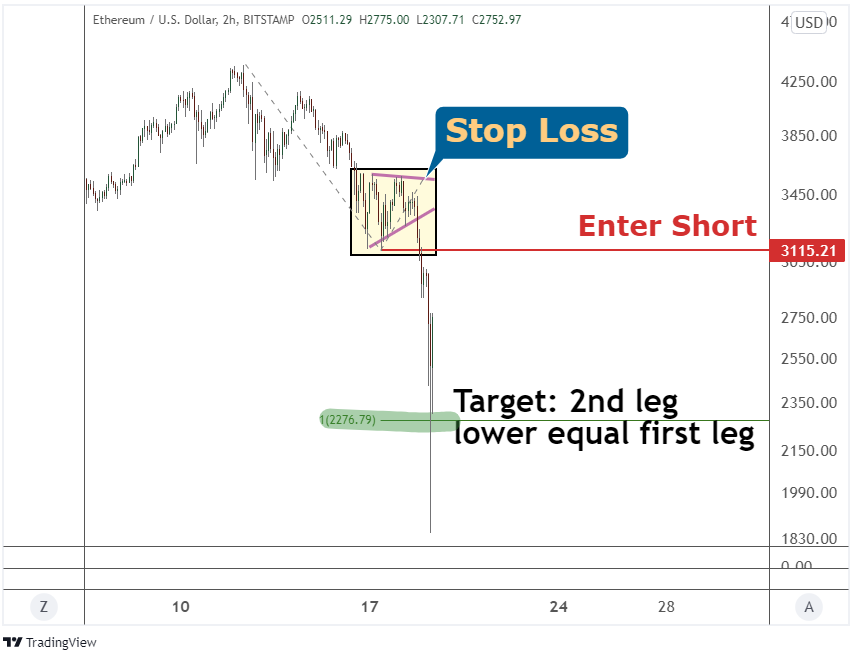 For ETH in the chart above, this places a take-profit target near $2,300.

What’s the difference between pennant patterns (bullish and bearish) and triangle patterns? At first glance, they’re very similar and overlap in a lot of areas. The pennant pattern does include a triangle-like shape during the consolidation phase. However, the main difference is what happens before and after the triangle — and how long the triangle itself lasts. 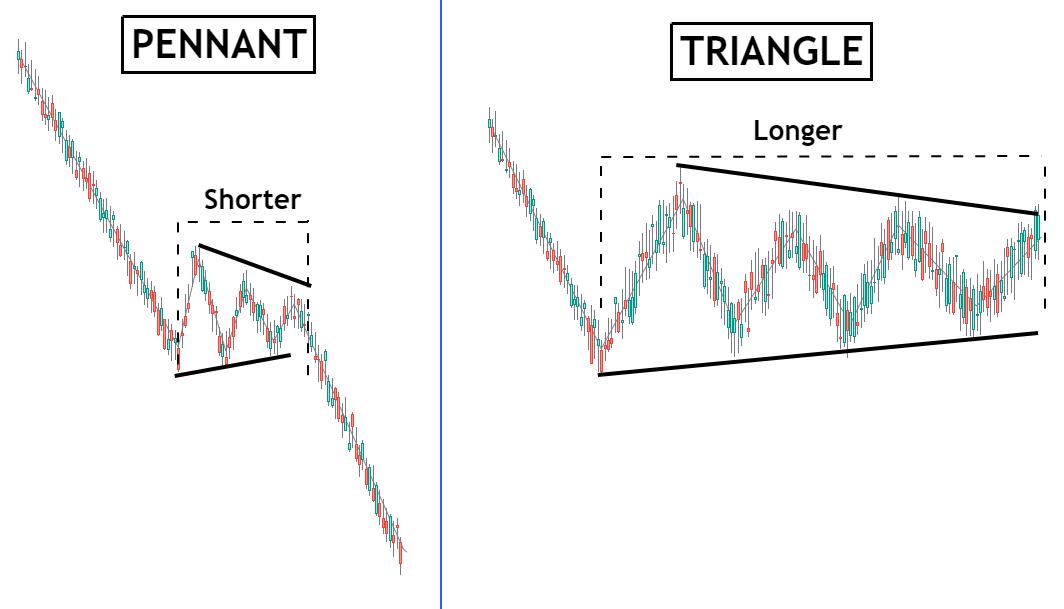 Leading into the bearish pennant pattern, there’s a deep and strong correction. Then, the pattern consolidates into a triangular formation. However, with a regular triangle pattern, there doesn’t have to be a strong trending move preceding the triangle.

Secondly, after the triangle in a pennant pattern forms, it’s very clear in which direction to expect the pennant to break. It will break in the direction of the preceding trend, which — in the case of a bearish pennant — is to the downside. With a regular triangle, the breakout might happen to the upside or downside.

The third main difference between a pennant pattern and a triangle pattern is how long they last. The triangle portion of a pennant tends to be shorter in duration than that of a typical triangle pattern. The swiftness of the pennant’s triangle happens because the emotions of the correction are high, and traders aren’t buying into the consolidation of the downtrend en masse. In contrast, a regular triangle pattern can last years, and be preceded by small trends.

Limitations of the Bear Pennant Pattern

An effective pennant can tip you off to a powerful trend with a good risk-to-reward ratio trade. However, not all developing pennants are 100% accurate.

If the triangle consolidation phase becomes prolonged, then the possibility of a continuation lower lessens. This means the likelihood of an outright reversal increases, which can frustrate bearish traders.

One way to avoid this frustration is to wait for a breakdown below the lows of the triangle, rather than trying to time a short sell entry at the triangle’s high.

Another limitation of the bear pennant pattern is that if you follow it on a minute chart, the data coming in from other confirming indicators may be flawed. There simply isn’t enough data feeding into the volume or ATR indicator to produce obvious signals. As a result, a smaller chart time frame may not show confirmation of the pattern, even if it eventually plays out.

The bear pennant pattern is an easy-to-spot pattern that’s simple to trade. The structure of the pattern and the indicators that confirm it is simple to follow. Once spotted, the subsequent trades can establish excellent risk-to-reward ratio opportunities.

As a result of this simplicity, the bear pennant pattern is a favorite among crypto traders.