Falling Wedge Patterns: How to Profit from Slowing Bearish Momentum

The falling wedge is a bullish price pattern that represents a story about the market in which bulls are preparing for another push. In cryptocurrency trading, buying an asset from a logical position is more likely to provide success than randomly buying an asset without applying technical analysis. Therefore, keeping falling wedge patterns as a main pattern in your trading checklist is a great way to make money from the crypto market. This article explains the falling wedge pattern’s bullish indication in crypto charts, along with its use as both trend continuation and reversal pattern.

Is a Falling Wedge Pattern Bullish or Bearish?

A falling wedge pattern is bullish, although it appears after a bearish trend. It signifies that bulls have lost their momentum, and bears have temporarily taken control over the price. As a result, the price starts to make new lower lows, but at a corrective pace.

Crypto prices rarely move in a straight line. Rather, like most assets they tend to zigzag, with swing lows and highs forming, even if the price remains within a trend. Therefore, investors often experience temporary bearish correction within bullish trends, giving rise to patterns like the wedge, triangle, flag or channel.

These are signs that buying pressures are being reduced due to profit-taking. The uniqueness of the falling wedge pattern is that it can produce a higher accuracy of trade than a traditional descending channel. 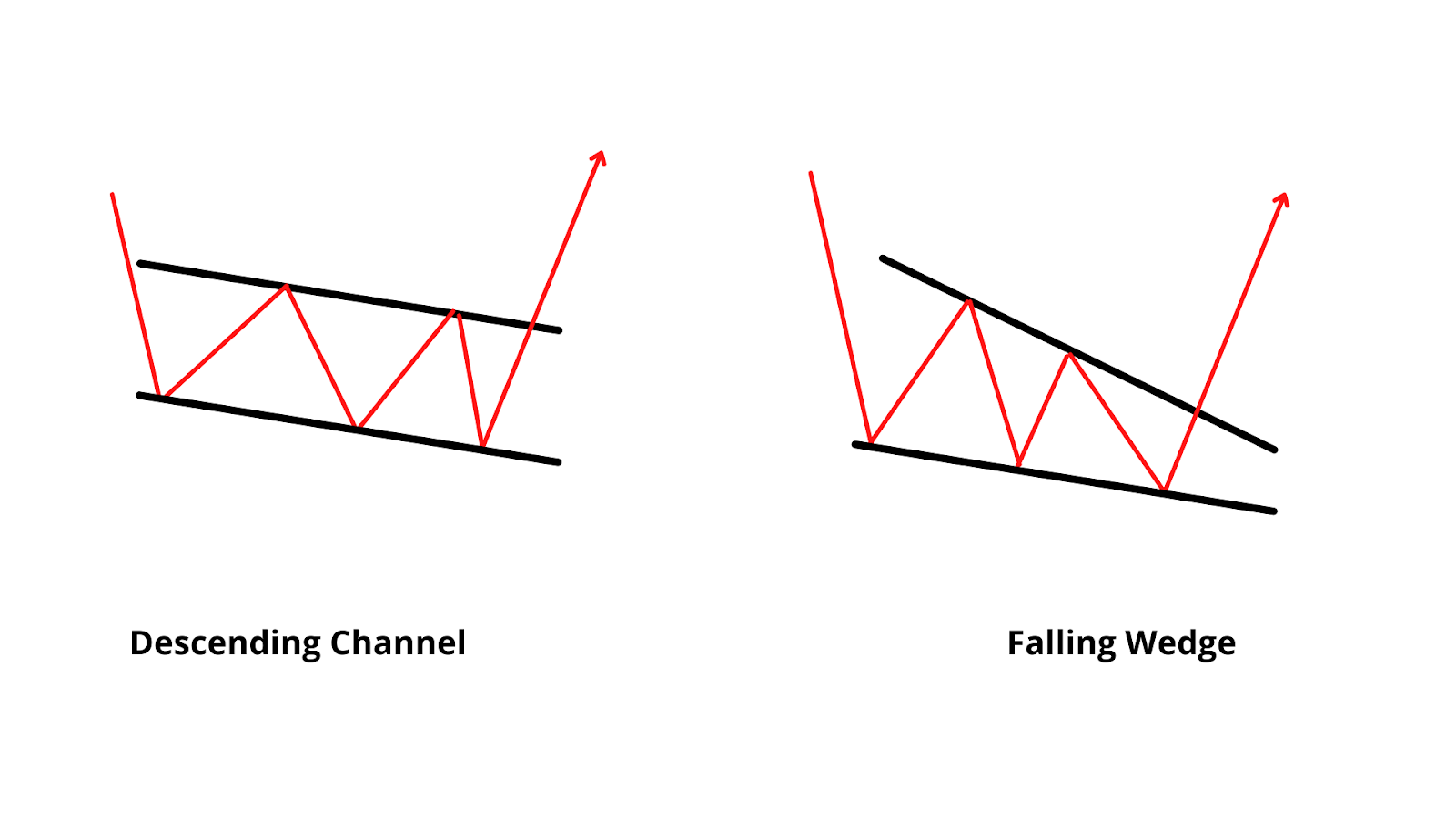 On the other hand, with the falling wedge, swing levels squeeze toward each other, which is a sign of a deeper correction. Before making a trading decision, investors should focus on where the major trend is heading and how volumes are performing.

Let’s look at the pros and cons of the falling wedge pattern:

How to Identify Falling Wedge Patterns

A price pattern on a cryptocurrency chart isn’t randomly formed. Instead, it represents a story about buyers’ and sellers’ activity. Likewise, the falling wedge pattern, which occurs after a bearish trend, represents a narrative about what bulls and bears are doing — and what they might do next.

A bullish trend forms after a significant event by encouraging buyers to long an asset with the hope of future price appreciation. However, it’s often difficult for investors to hold this position for a long time. They usually book a profit after getting some benefit, often adding more positions when the price is discounted. As a result, the bearish wedge pattern that we see after a bullish trend is partially the result of buyers’ profit-taking. Once the profit-taking is over and the price finds a dip, investors will begin to buy again.

The trading approach with the falling wedge pattern is to find when the correction is over and the bullish trend is likely to resume. The global financial market is driven by institutional traders who need liquidity. There have to be enough buyers to sell and enough sellers to buy. Therefore, patterns like the falling wedge indicate that institutional traders who’ve created the bullish trend might open another buying position, resuming the trend after a discount. 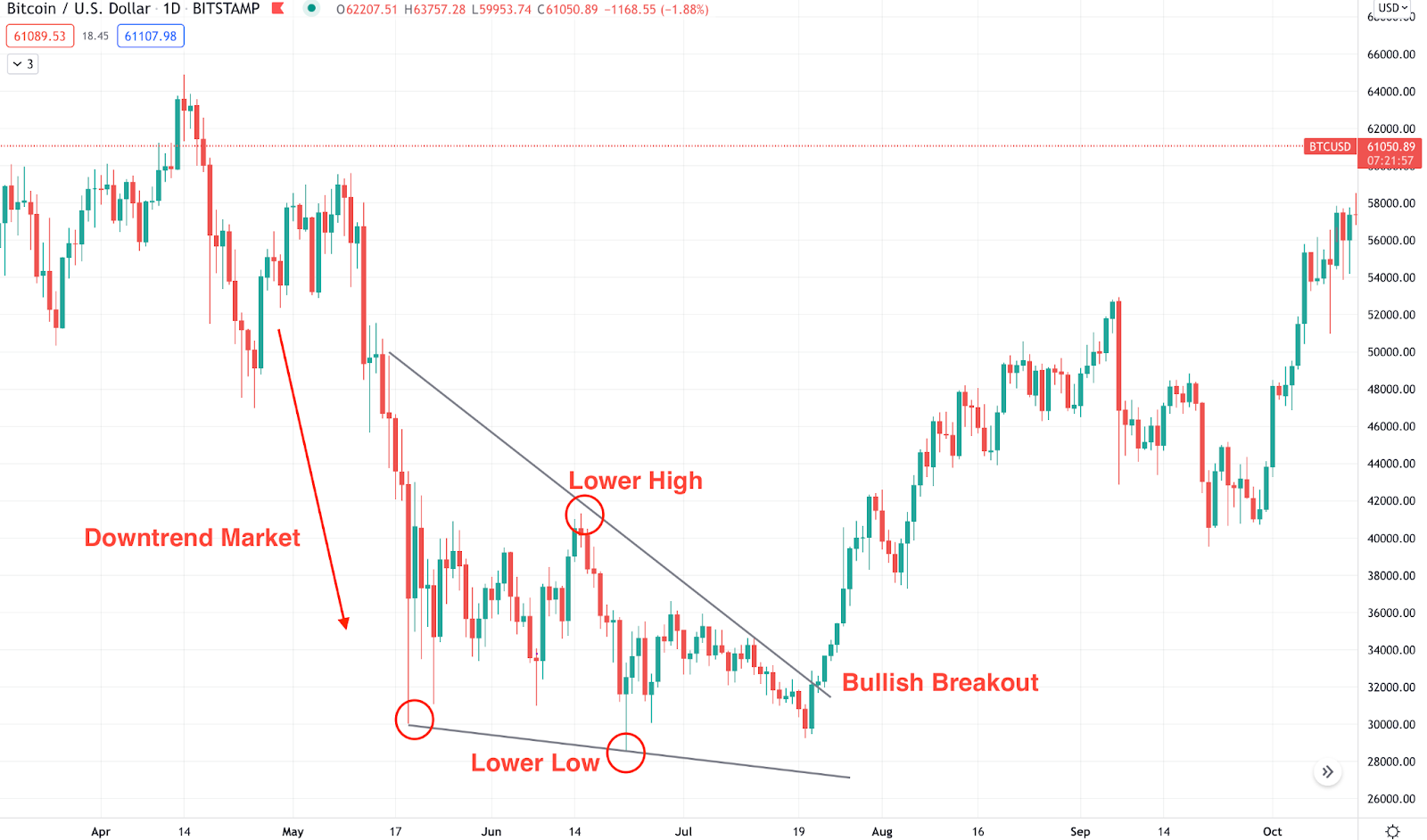 The above image demonstrates a falling wedge pattern appearing after a bearish trend. Bitcoin’s price moves sharply lower from $64,000 to $30,000, but despite strong selling pressure, it doesn’t break below $30,000. As a result, the price remains corrective and forms a falling wedge. In this pattern, a new lower low and lower high are formed as the price remains within converging trend line support and resistance.

Besides swing levels, investors should monitor how the volume is changing. As the price moves to a consolidation phase, the volume should reduce due to less trading activity. However, once the breakout happens, it should be supported by higher volume. 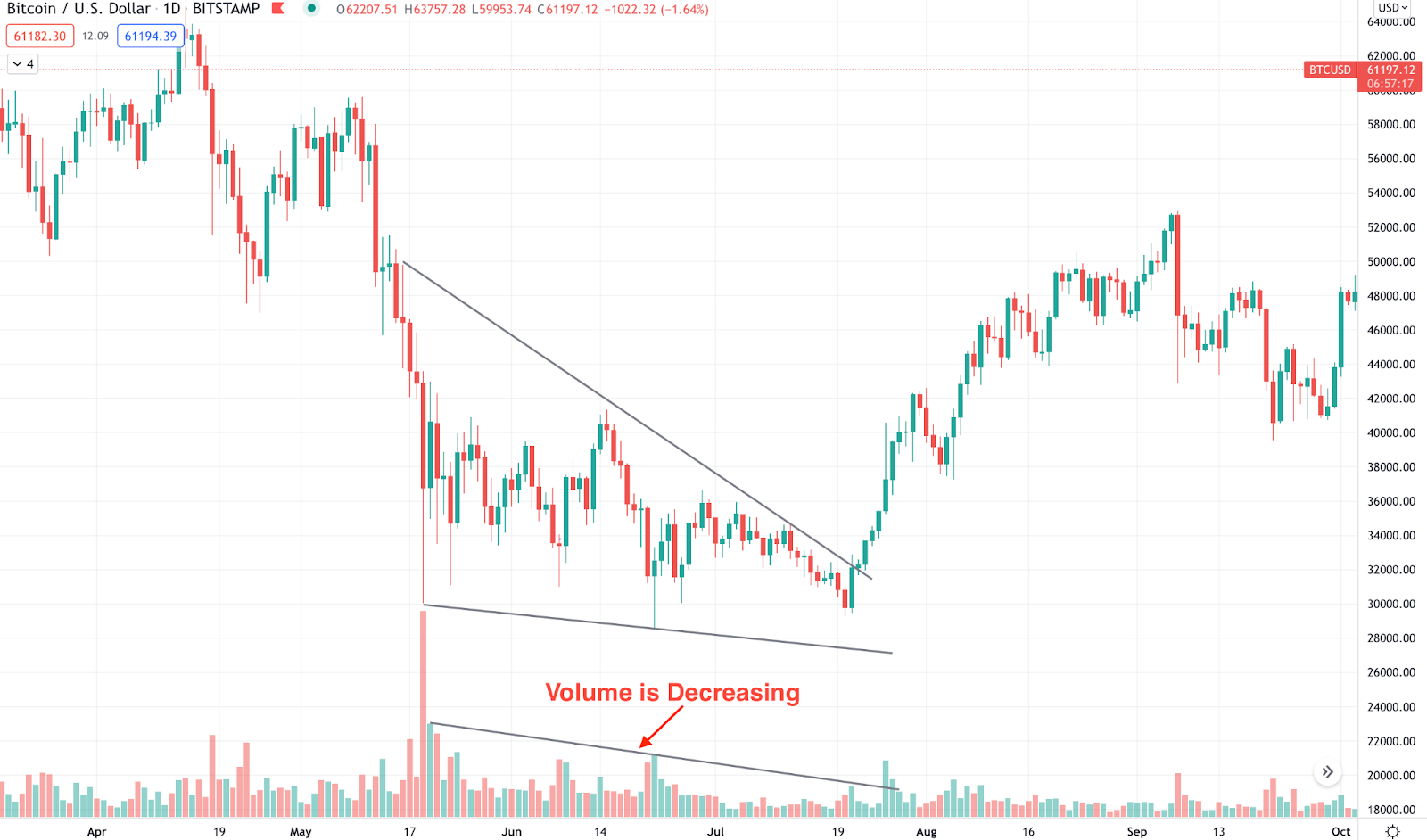 The above image shows the same BTC/USD chart with the trading volume added. Here we can see that the volume is higher at the beginning of the falling wedge pattern, but volume bars start to move lower as the wedge pattern extends. Once the price moves up from the wedge pattern with a bullish breakout, the volume begins to rise again.

How to Trade Falling Wedge Patterns

A falling wedge is a reversal pattern, but investors can use it as both reversal and as continuation of a trend.

The price of a cryptocurrency moves by creating swing lows and highs. As a result, investors experience minor bearish swings within a major bullish trend. Therefore, a reversal from a minor swing level is ultimately a continuation of the major trend.

Let’s have a look at the image below: 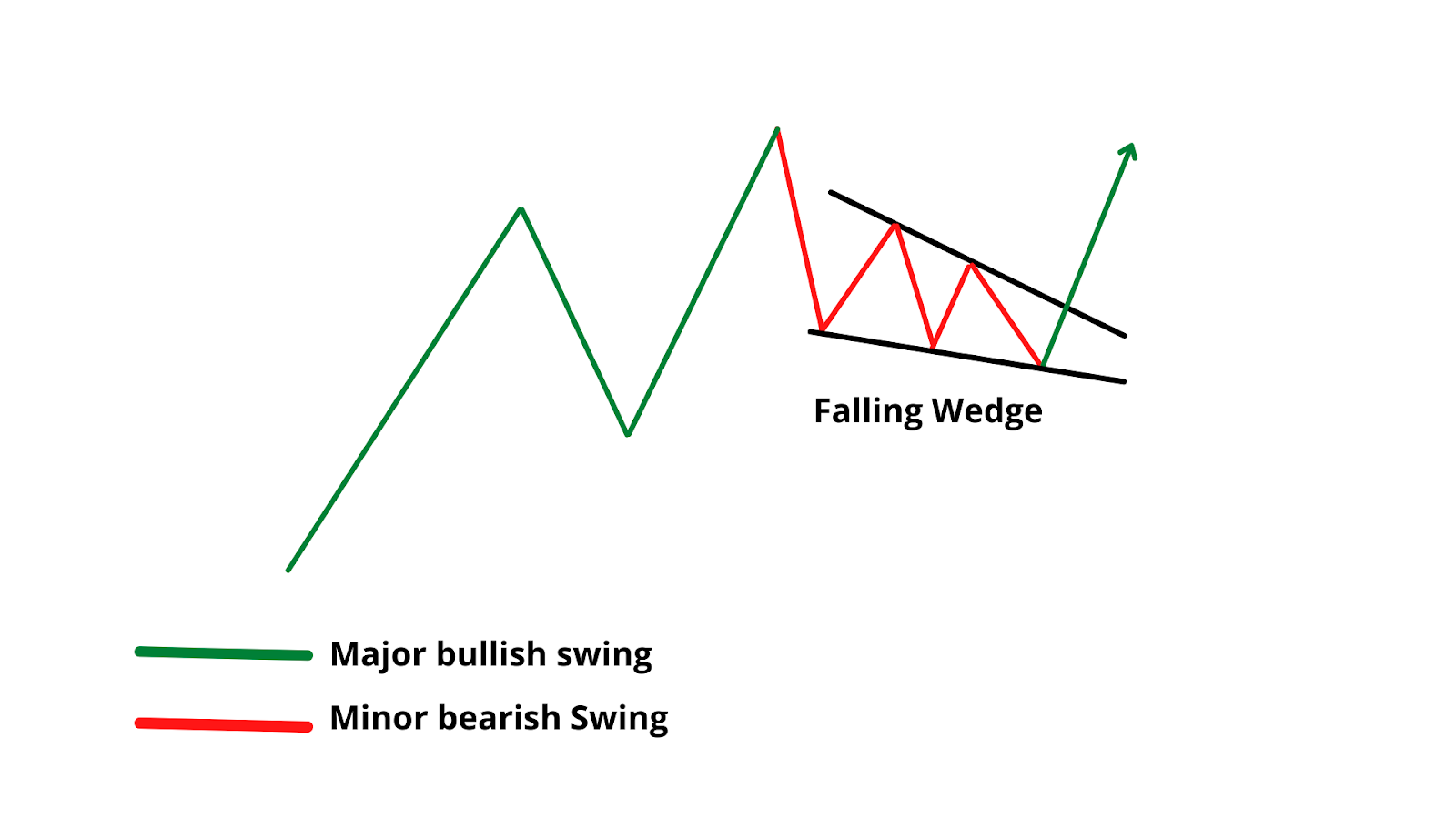 In the above image, the major bullish trend is marked in green where the price is moving up by creating higher highs. However, when we look inside the bearish correction, we see the falling wedge pattern begin to form, with the major trend resuming after a breakout. Therefore, although the falling wedge pattern appears after a bearish trend, it’s still within the long-term bullish trend. 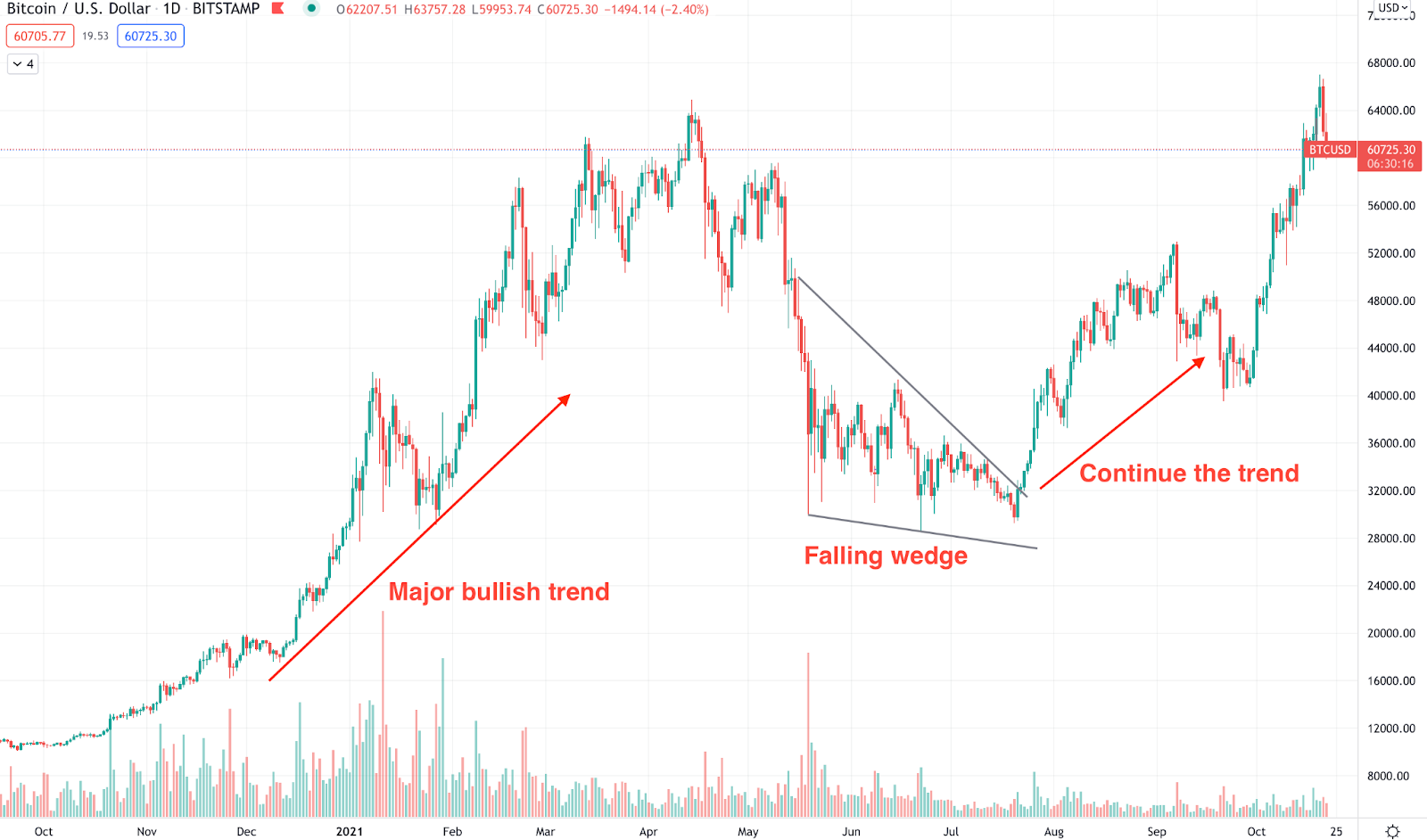 The above image gives a practical example of a wedge pattern as the continuation of a bullish trend on a real chart. Here, the BTC/USDT market trend is bullish, when a falling wedge breakout from the minor bearish swing resumes the trend and makes new, higher highs. Therefore, the trend continuation is confirmed once the price moves above the falling wedge with a bullish candle. 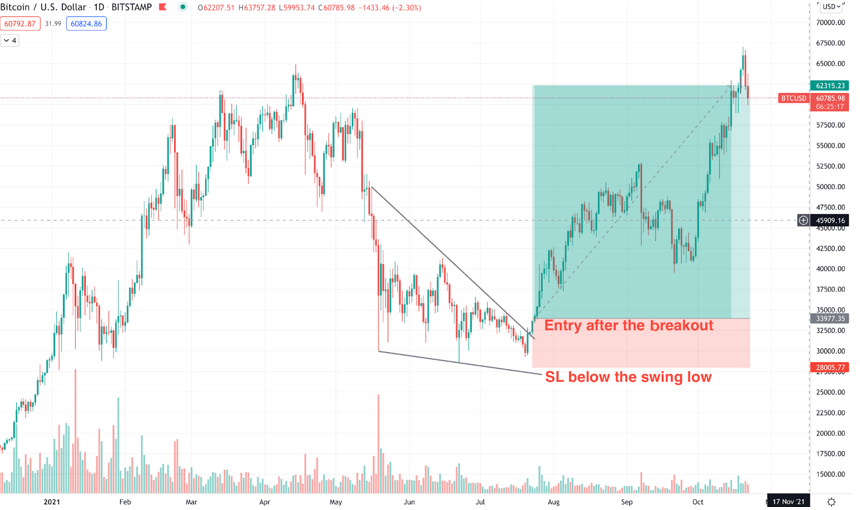 The image above shows how to open a buy trade from the falling wedge breakout. In this method, the buying setup is valid as long as the price remains above the wedge pattern’s low. In addition, the stop-loss should be below the swing low, with some buffer.

As the falling wedge pattern is a strong bullish continuation pattern, it often produces more profits. Therefore, traders can hold the buy position until the price reaches any significant resistance level.

With cryptocurrency trading, a falling wedge reversal pattern from a significant price level may provide more profits than it would in traditional markets. However, finding the right pattern from the ideal location is important.

The falling wedge pattern appears in a swing low, indicating that bears are losing their momentum. Therefore, the first sign of a highly profitable wedge pattern is to find it after a considerable downward movement. It’s hard to determine whether the bearish trend will continue or reverse, so finding the pattern at a bottom increases the probability of a trend reversal.

Look at the chart to see a strong downtrend at the beginning which is losing momentum at the bottom. 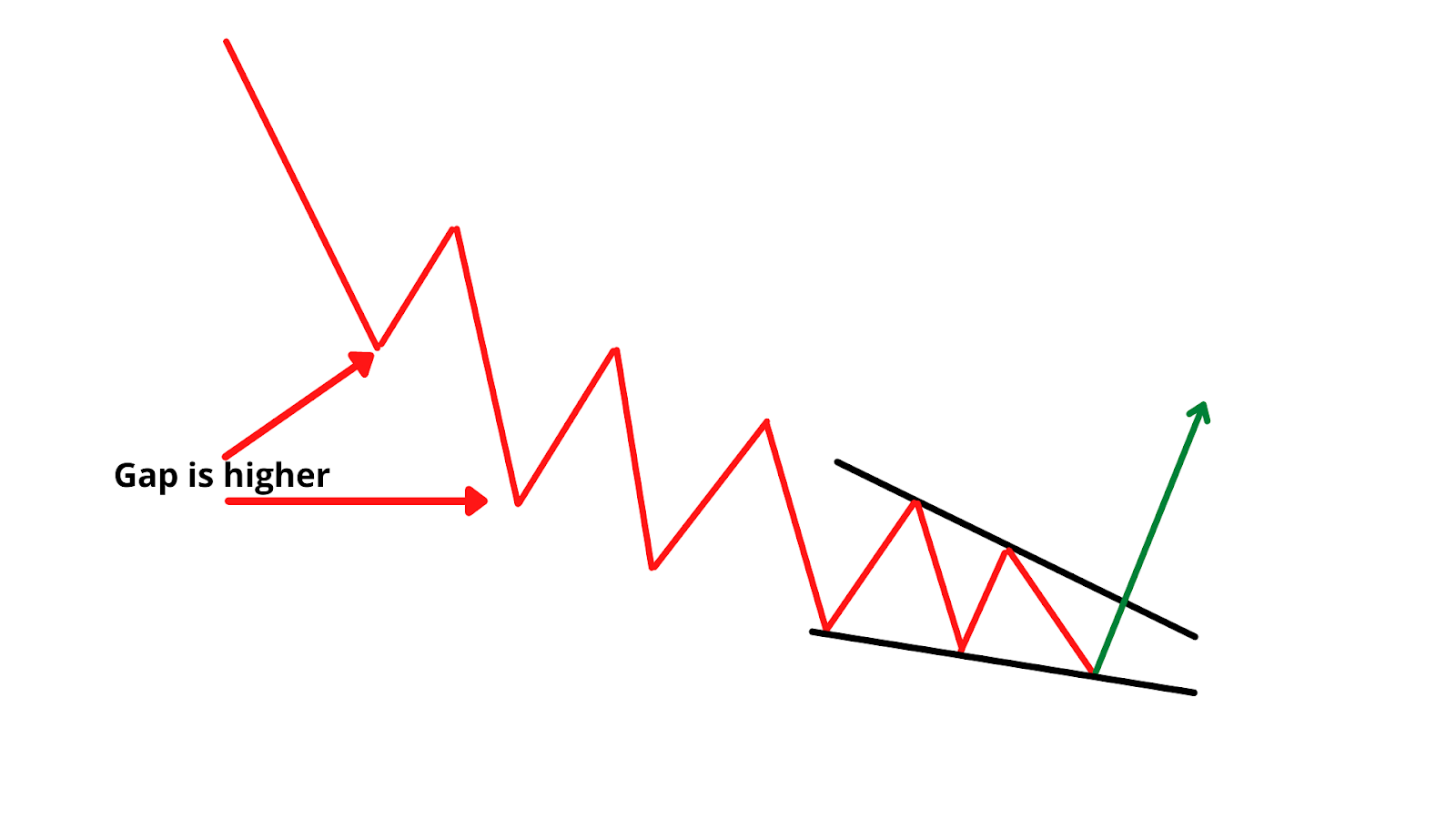 The above image explains how we can measure the strength of a bearish trend by looking at swing lows. If bears become unable to make new lower lows with a long distance, it’s a sign that they’re losing momentum.

Therefore, to trade the falling wedge pattern as a major market reversal strategy, we need to ensure the following confirmations:

Let’s see how the falling wedge pattern works on a real chart: 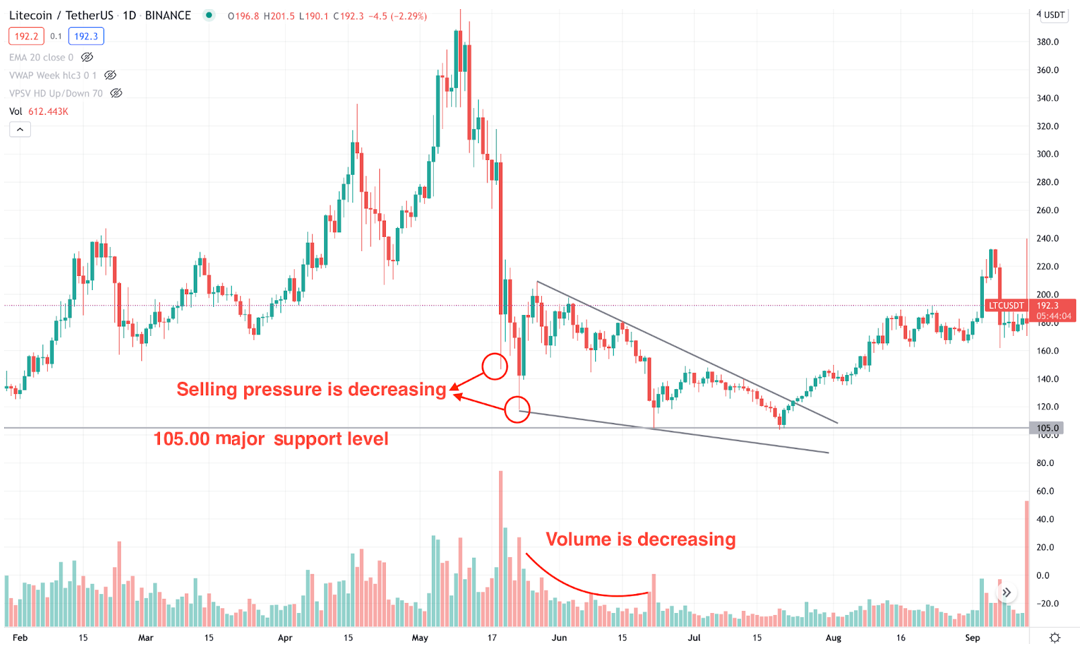 In the above daily LTC/USDT chart, the price collapses from the $400.00 resistance level but loses its momentum at $105.00. Meanwhile, the price forms a wedge pattern, as supported by the decrease in volume. As a result, once the bullish breakout occurs, it shifts the trend from bearish to bullish.

The trading approach of the falling wedge reversal pattern is similar to the continuation system. The trading entry becomes valid when the price moves above the falling wedge pattern with a strong bullish breakout. Again, the stop-loss should be below the support level, with some buffer. Trading in higher time frames often allows traders to hold the gain for years. However, taking some profits from strong resistance levels is important. 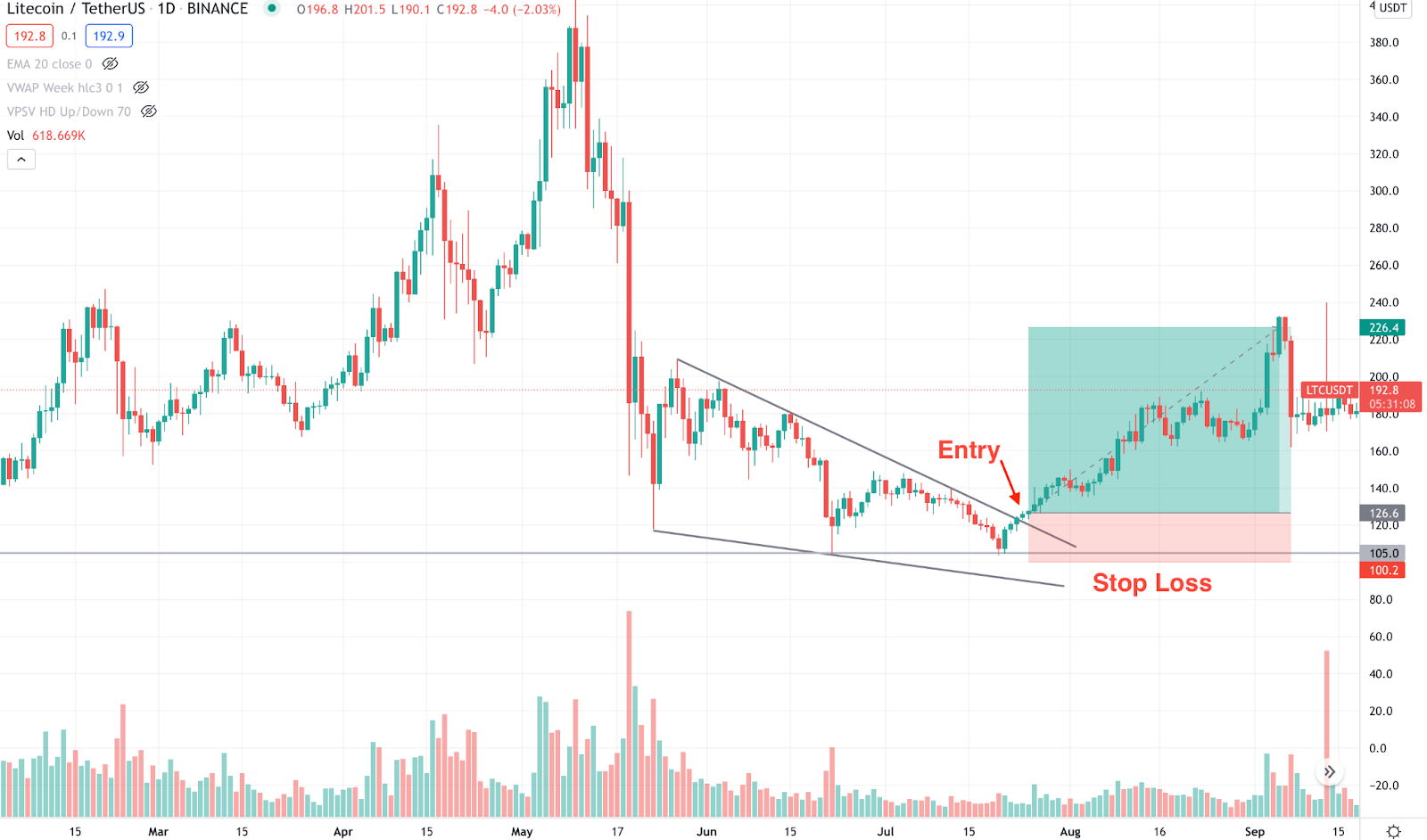 The above image shows how to open the buy trade from the support level using the falling wedge pattern. The image clearly shows that the volume decreases with the wedge formation, which is a sign of lower trading activity. However, once the price breaks above the SL level, the volume starts to rise.

On the other hand, there is no guarantee that the price will come back to the support level after breaking above the falling wedge. In that case, traders can open the first buy entry immediately after the breakout, and the second entry after completing the correction.

These patterns usually appear after a bearish trend and indicate that bulls and bears are both losing their momentum. However, the price direction after the two patterns isn’t the same. Any bearish breakout after a descending triangle increases the possibility that the existing bearish trend may continue. 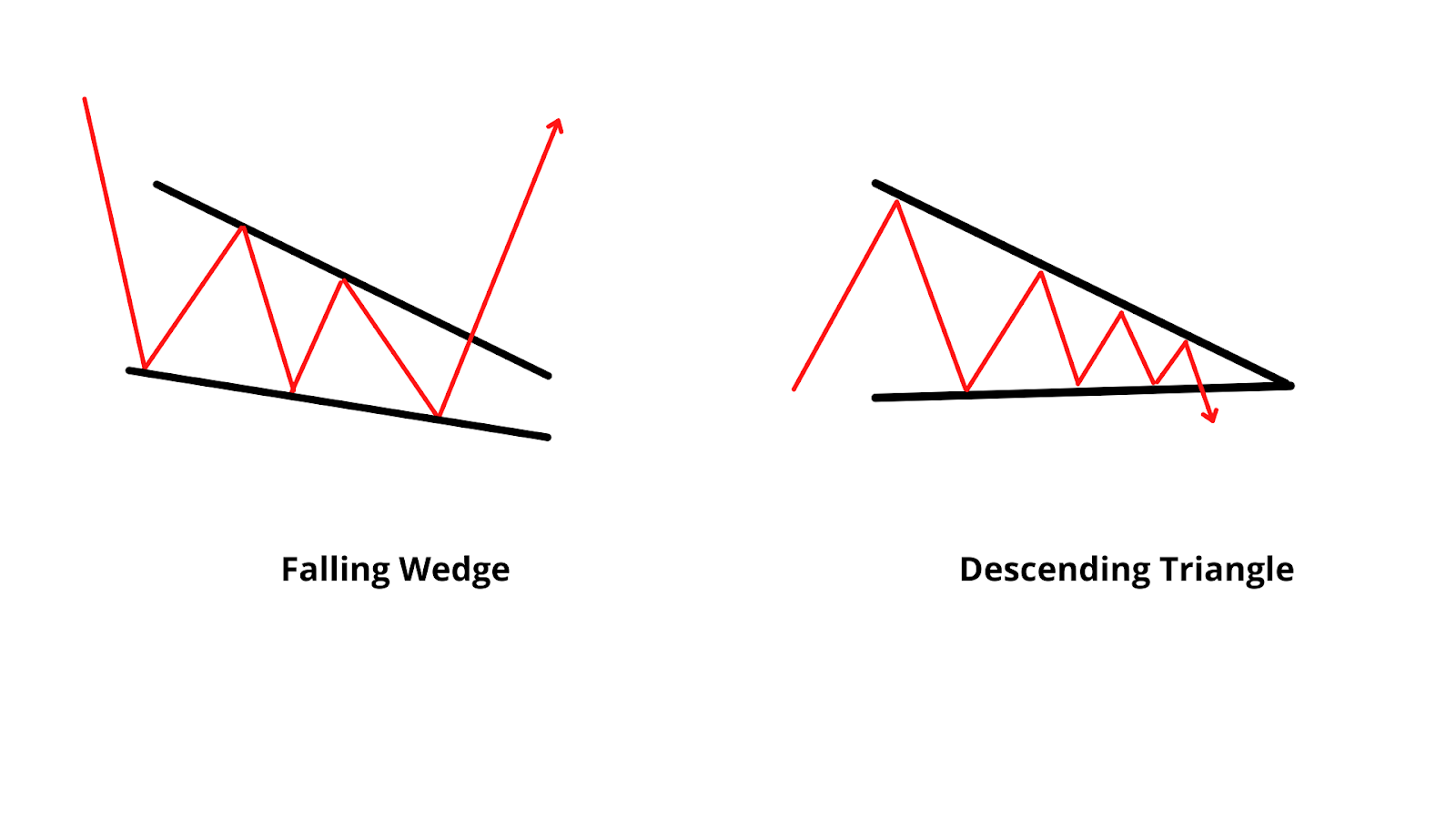 In the descending triangle, the price moves forward with lower highs forming, indicating that bulls are losing momentum. However, there are no lower lows formed, which signifies that sellers’ dominance remains unchanged. This repeated testing of the horizontal support indicates that the level is becoming weaker. Once the price moves below the descending triangle pattern, it will likely extend the existing bearish trend.

Based on the above example, let’s distinguish the key differences between the falling wedge and descending triangle:

The bullish flag pattern forms after a bullish trend, and moves lower by maintaining an equal distance between swing levels. It indicates that bulls are taking profits and they might continue the momentum. During the bull flag formation, the trading volume should dry up and push higher on the breakout. Identifying the bull flag in the price chart involves some complexity, as it contains several components. Traders need to have a clear understanding of bull flag components and trading approaches.

Let’s look at the approach to trading with a bull flag pattern: 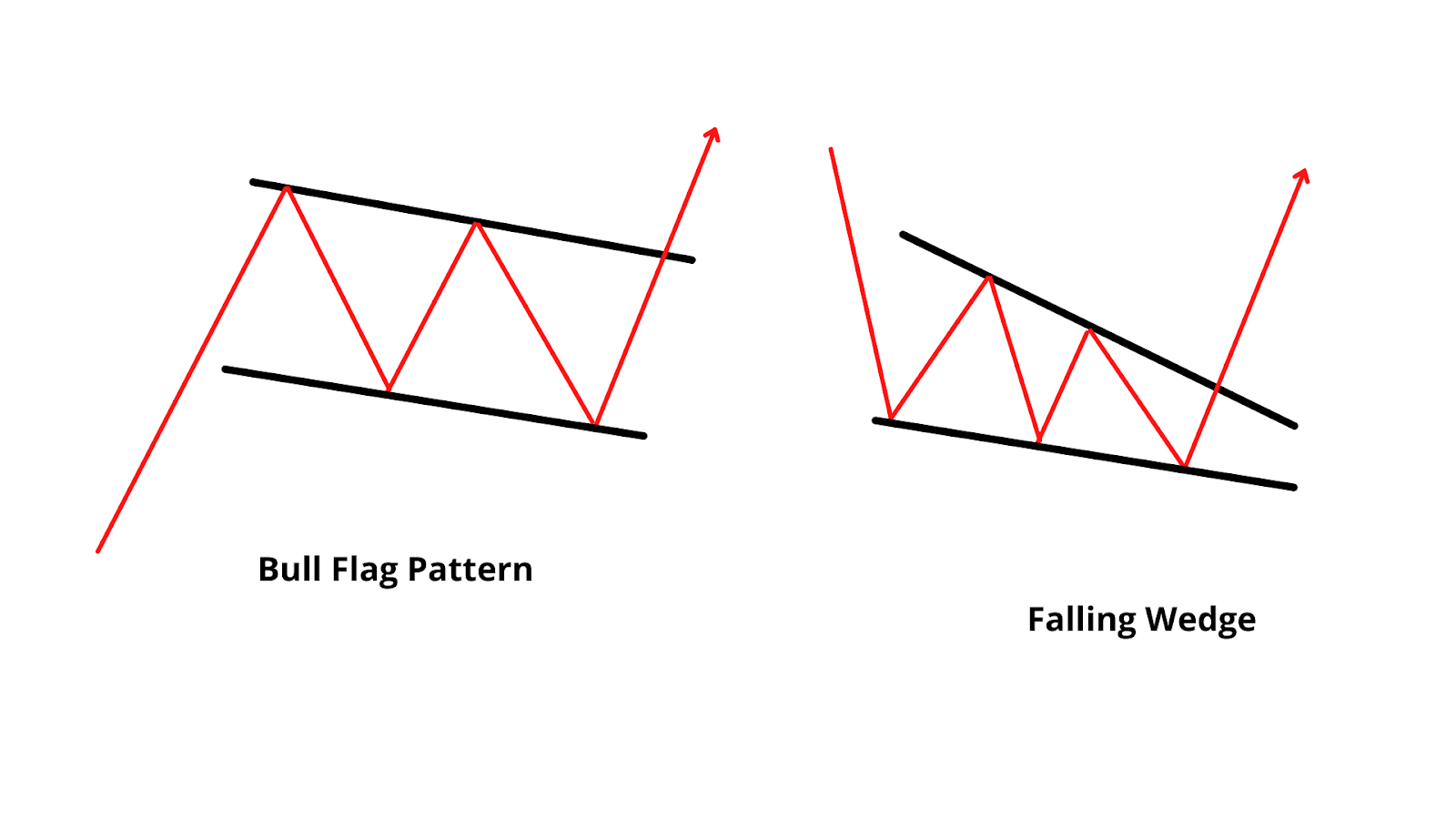 The above image represents the key differences between the bull flag and the falling wedge pattern. Although both of these patterns work as bullish trend continuations, there are some key differences that a trader should know:

While it’s difficult to find the ideal falling wedge pattern in perfect market conditions with cryptocurrency trading, investors can nevertheless apply the rules and concepts above to find lucrative trading opportunities.

Overall, falling wedge patterns are a great way to spot trend reversals and find profitable ways to buy before a new trend emerges. However, investors need to be aware of other factors that should be present to confirm the pattern. The key points that might help you to begin with this pattern are as follows: