Evening Star Pattern: How to Identify a Bearish Reversal in Crypto

When the crypto market corrects, it typically becomes volatile. Traders need a process to alert them to a potential correction so they can prepare for the volatility. Technical analysis, or identifying patterns and trends in market data, is the most common way for crypto traders to develop bearish alerts. Japanese candlestick patterns like the evening star pattern are popular because they can help traders exit a bullish position to lock in profits or generate a new short-sell position.

In this article, we’ll look at the candlestick pattern known as the evening star and see how to trade it.

What Is an Evening Star Candlestick Pattern?

An evening star candlestick pattern is a three-candle formation used in technical analysis to identify bearish reversals. It consists of a large green candle, a second small-bodied candle, and a third large red candle. 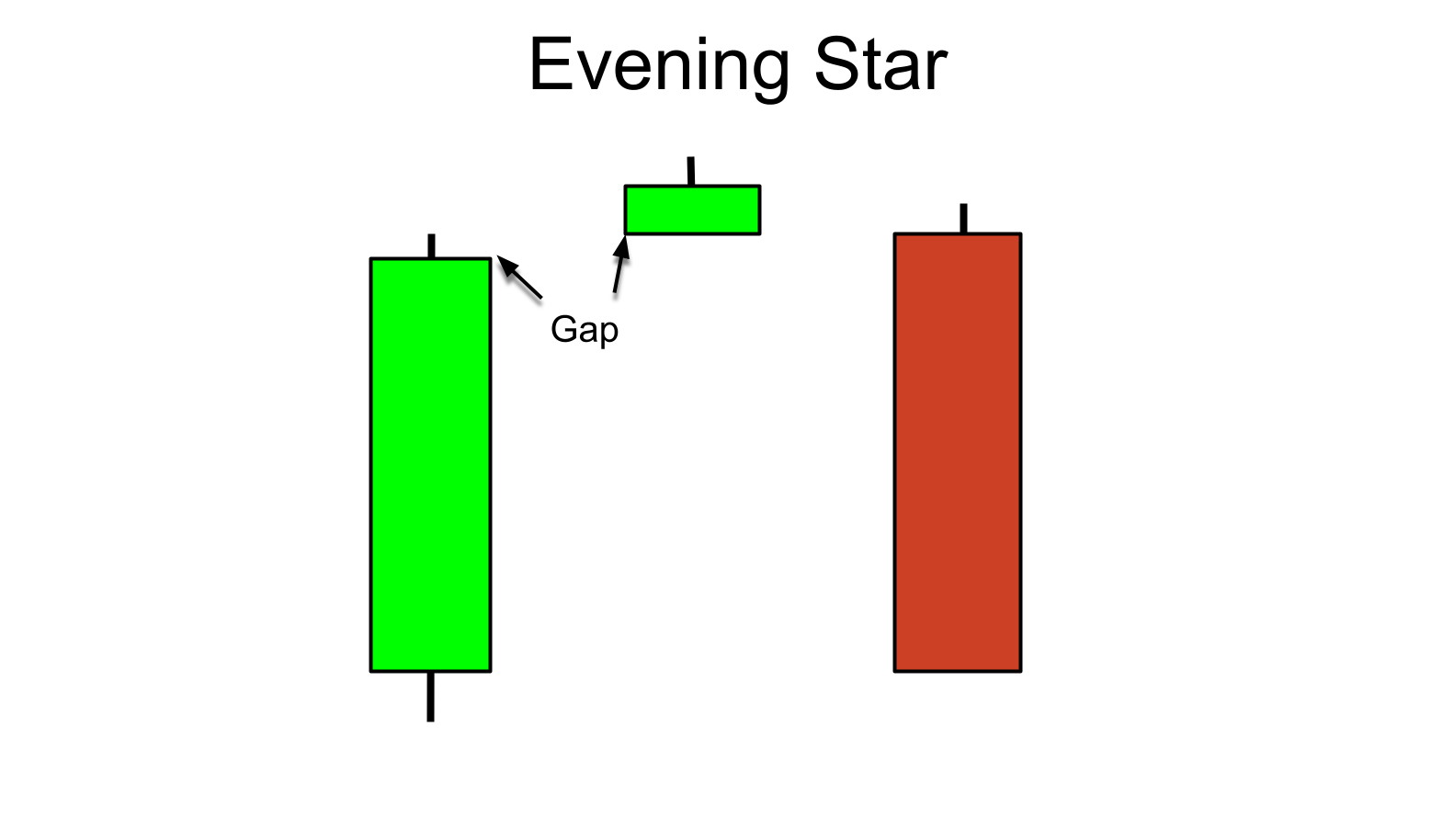 The first candle of the evening star pattern is a large green candle, which suggests the bulls have complete control, pushing the market to a new high.

The next candle continues to run up to higher levels, but the strength behind the move is lacking, so the candle has a smaller body. Ideally, the second candle should gap higher on the open, but since crypto trades continuously — 24 hours a day, 7 days a week — gaps are rare on price charts.

As the market begins to sell off, it produces a large red candle. Often, the gains witnessed by the first candle have evaporated by the time this third candle completes.

These three candles together provide crypto traders with important clues about larger trends for the crypto market. The evening star pattern is generally found at the end of an uptrend, signifying the kickoff to a bearish reversal.

Strengths and Weaknesses of the Evening Star Pattern

The evening star is an effective pattern, making it a favorite of crypto traders as it helps them identify a bearish turn in the market.

One unique aspect of the evening star is that it requires three candles to generate. This makes the formation easier to identify because the candles must take a specific shape. 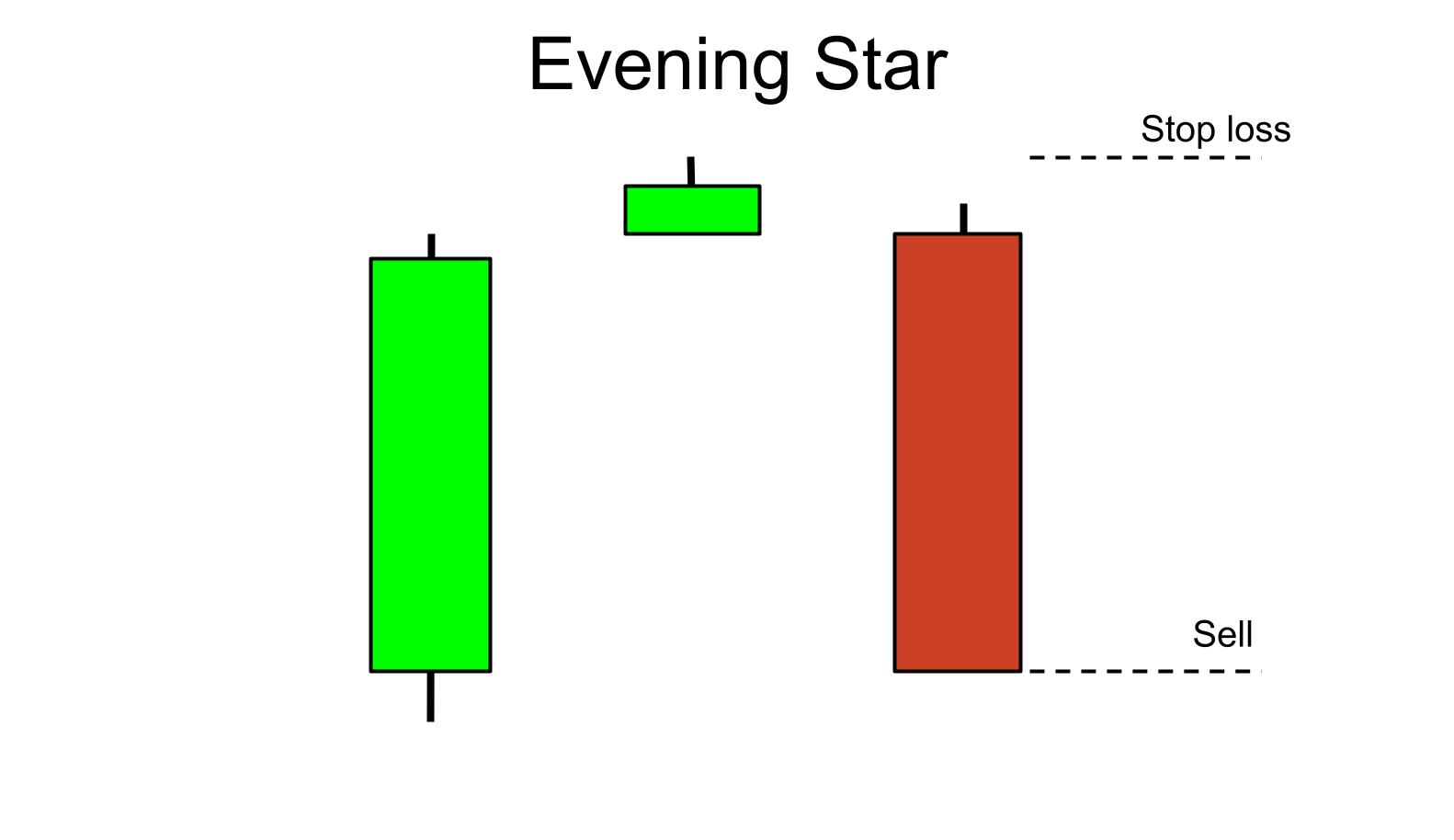 Additionally, crypto traders like the evening star because it helps them exit a bull market to protect profits. Once the pattern is confirmed, a trader closes all or a portion of their position.

If the trader feels a larger bear trend is going to unfold, they can consider opening a short-sell position with a stop-loss placed above the high of the pattern. Prudent risk management suggests targeting twice the distance from the entry to the stop-loss to generate a 1:2 risk-to-reward ratio.

There is no pattern or indicator that’s foolproof, and the same holds true for the evening star. Just because the pattern appears doesn’t mean that the next price move is going to be a downtrend. There are occasions when the evening star pattern may generate false signals and the market might actually rally.

One way to minimize the number of false signals is to more completely understand the pattern, its shape, and how to trade it — which we’ll explain further below.

The evening star formation is relatively easy to identify because there are three candles working together to tell you a story. The context and backdrop of the story are that the pattern appears after the market has already experienced an uptrend.

The first candle of the pattern appears with a large green (or white) body to extend the current uptrend. Toward the end of strong trends, FOMO can kick in: as the trend accelerates, traders and investors jump on board, afraid of missing out. 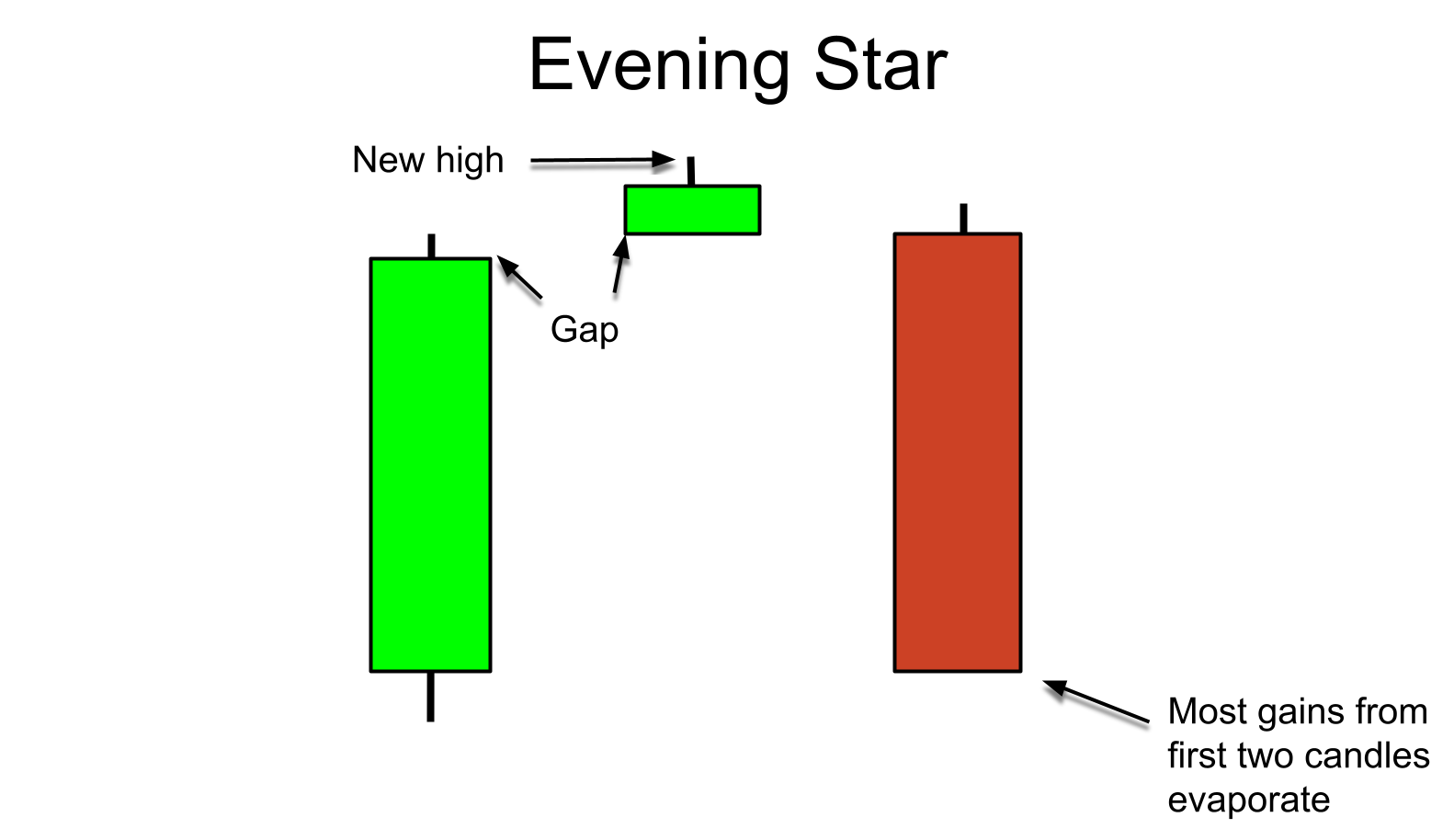 As the first candle closes, the second candle continues initially with another slight gain. However, the strength from the previous candle is losing momentum. Many of the traders have joined the trend and the buying power is diminishing.

As a result, the market produces a small-bodied candle as the battle between the buyers and sellers is fairly even. At this point, the candle could be red or green. Either one is okay, as it’s more about the small range of the candle, relative to the previous green bar.

Then the third candle appears. Ideally, the third candle begins correcting lower, holding below the high of the second candle. The bullish momentum has completely dissipated from the first two candles, and the sellers take over while the buyers are nowhere to be found. As a result, the market corrects lower, fairly swiftly, erasing nearly all of the gains for the previous two candles.

How to Trade Evening Star Patterns

Once the evening star pattern is identified, it’s fairly easy to use the formation to help you enter into new positions — or help you exit out of an existing trend. The evening star candlestick pattern signals a bearish reversal. Therefore, it can be used to initiate new short-sell positions. 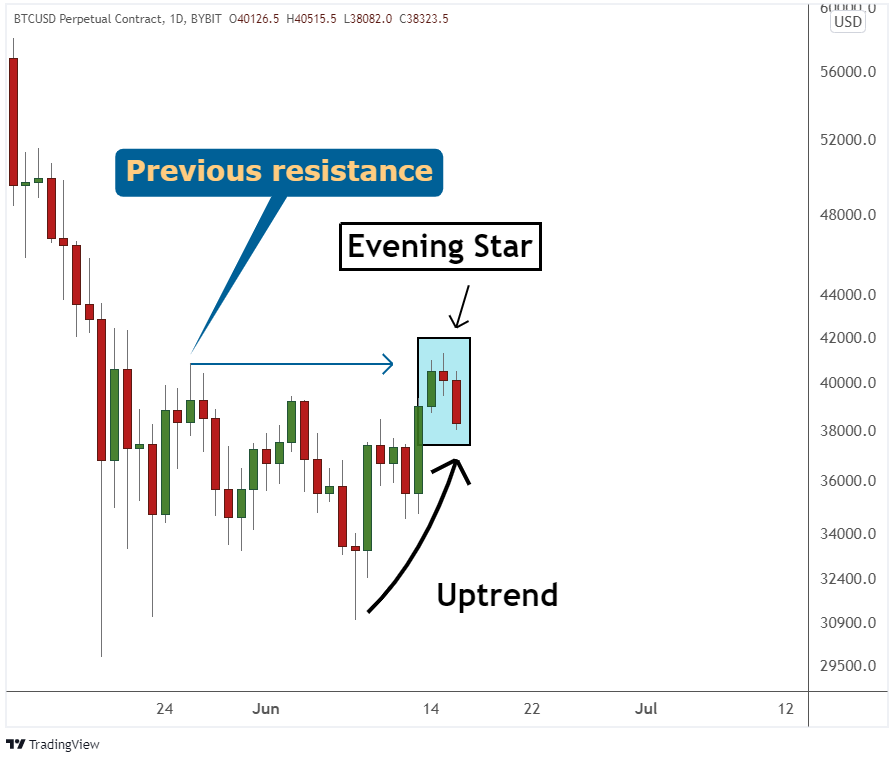 In the daily BTC/USD chart above, we see the price moving up to meet the resistance at a previous swing high. Bitcoin’s price drives the first candle of the evening star pattern higher to meet this resistance level.

Then, the second candle jumps to a new high, but there aren’t enough buyers for the breakout higher to follow through, leaving behind a smaller-bodied candle. As the third candle begins to form, sellers emerge, driving Bitcoin’s price lower and starting the leg of another correction. 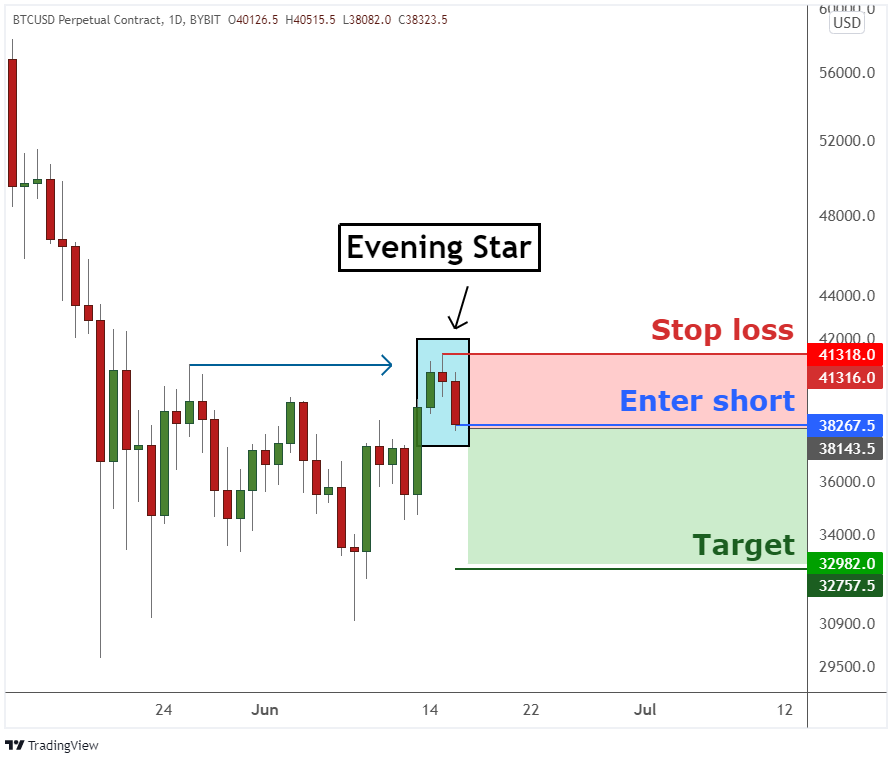 Once this pattern is spotted, especially near previous resistance, it signals a bear trend is about to take over. A trader would enter short on the opening of the next candle, while placing a stop-loss just above the high of the pattern.

To establish the target zone, take the distance between the entry to the stop-loss and multiply it by two. This product will be the distance to your target from your entry. 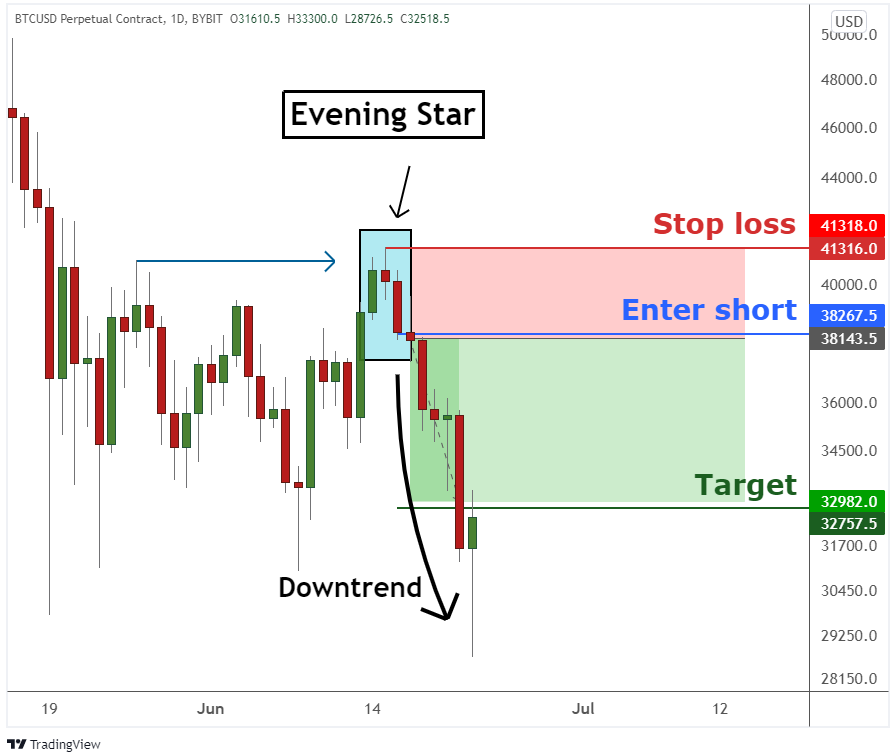 A couple of days later, Bitcoin corrected lower, reaching the target established by the pattern.

Using the evening star pattern to initiate new short positions isn’t the only way to implement a strategy. For traders who are positioned to the long side, the appearance of an evening star candlestick formation will signal the potential for the uptrend to terminate and reverse, starting a new downtrend. 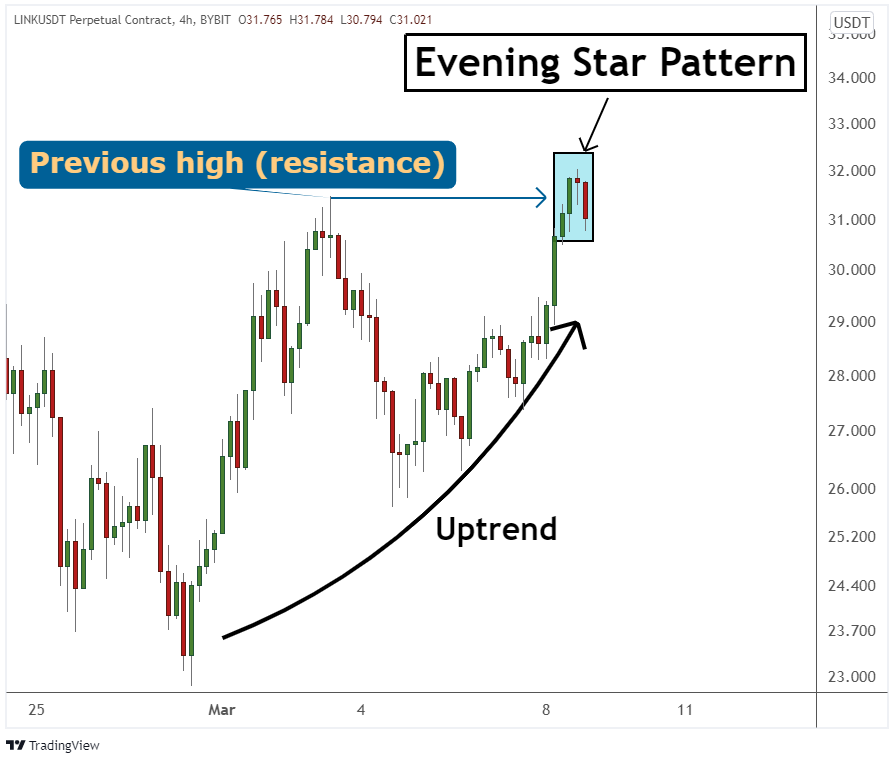 In late February 2021, a trader positioned to buy the dip would be riding the trend higher. LINK/USDT has increased by about 40% over the past couple of weeks, reaching a new high on March 3.

However, LINK/USDT drives even higher in what appears to be a breakout attempt, forming the first candle of the evening star formation. The second candle consolidates those gains, and the breakout attempt fails to follow through, leaving behind a smaller-bodied candle.

As the third candle forms, LINK/USDT begins to correct even further, nullifying the breakout and sealing it as a false break higher. 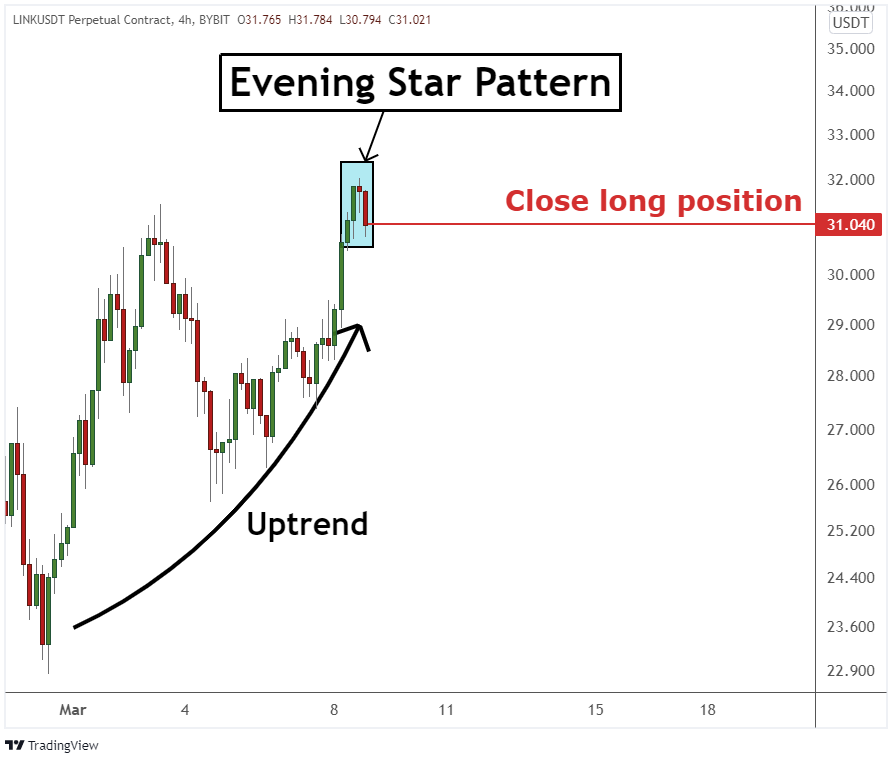 Once this pattern is completed, especially near the previous swing high from March 3 (which was acting as resistance), then we have multiple confirmations signaling the kickoff to another correction. At this point, the long trader may decide to close their position to lock in profits. 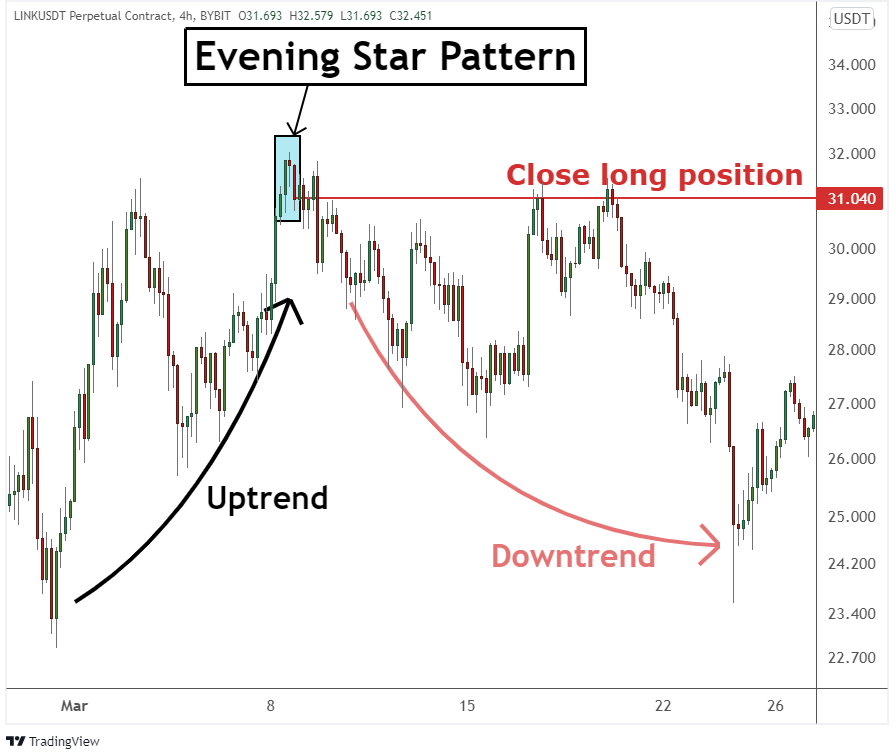 How Reliable Is the Evening Star Pattern?

By itself, the evening star pattern is a simple formation alerting us to the kickoff of a new correction. There are other technical analysis tools that can help increase the strength of the signal generated by this pattern.

As we’ve previously noted, when the pattern appears near resistance, it generates a stronger signal. Resistance is the area on the chart where buyers stop buying and sellers start selling. Levels of resistance can be determined in advance of the evening star pattern’s creation.

As a result, if the evening star formation appears near where the level of resistance has formed, there’s a stronger signal that a bear correction is about to begin.

There are multiple types of resistance which can be generated on a chart. One of the easiest to identify is a horizontal level of resistance. Our previous illustrations using Bitcoin and LINK, above, show how powerful the evening star pattern can be when combined with horizontal resistance.

Another easy form of resistance that can be determined on a chart is a moving average. 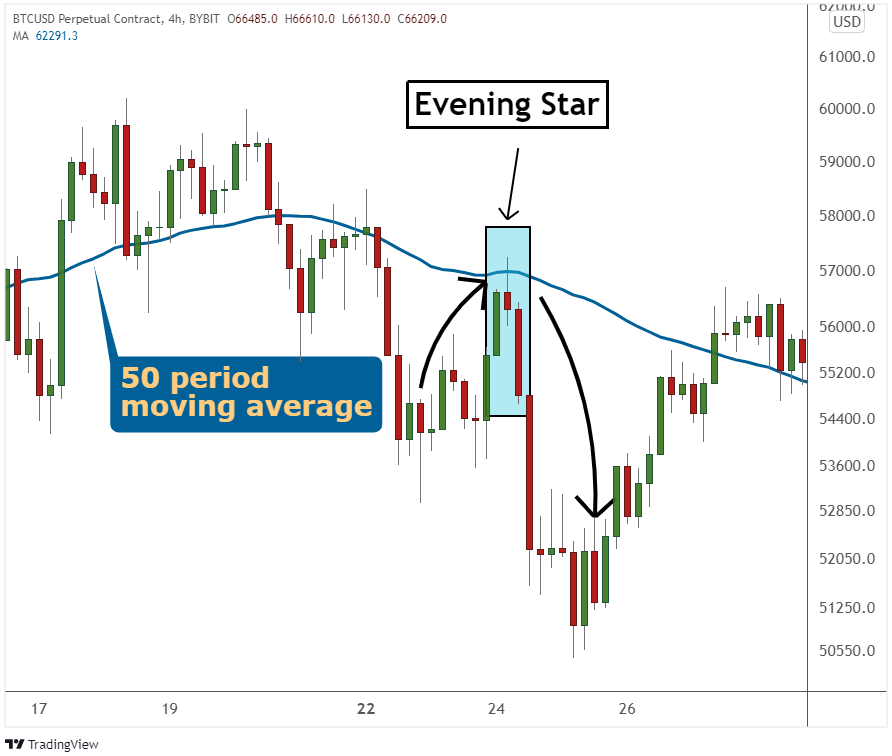 Above, we have a 4-hour price chart for Bitcoin with a 50-period simple moving average included. As Bitcoin’s price breaks below the moving average, it briefly rallies to reach the underside.

The evening star candlestick pattern appears right at the moving average, signaling a deeper correction is likely to continue. Bitcoin ends up correcting another 7% over the next day.

There are several other bearish reversal patterns which crypto traders follow. Let’s look at how the evening star pattern compares to the head and shoulders, bearish harami, and triple top patterns.

Evening Star vs. Head and Shoulders 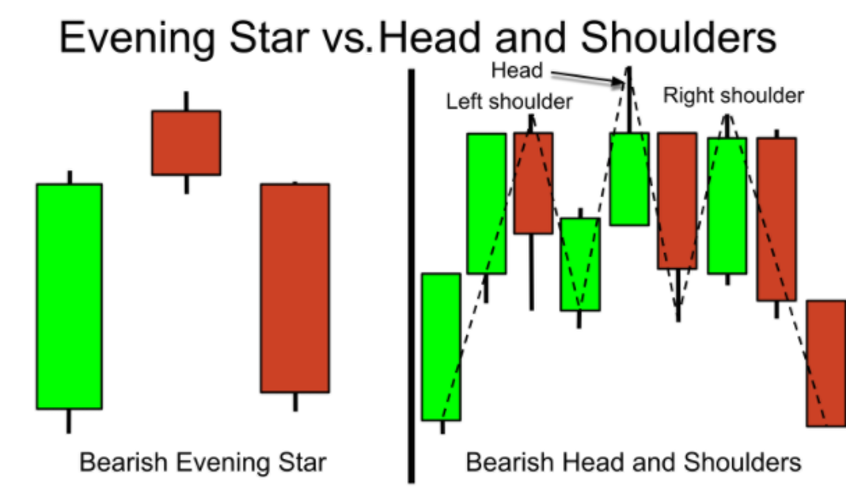 On the other hand, the evening star pattern will take the shape of one rounded top.

The bearish harami is another favorite pattern among crypto traders. However, there are distinct differences between it and the evening star. 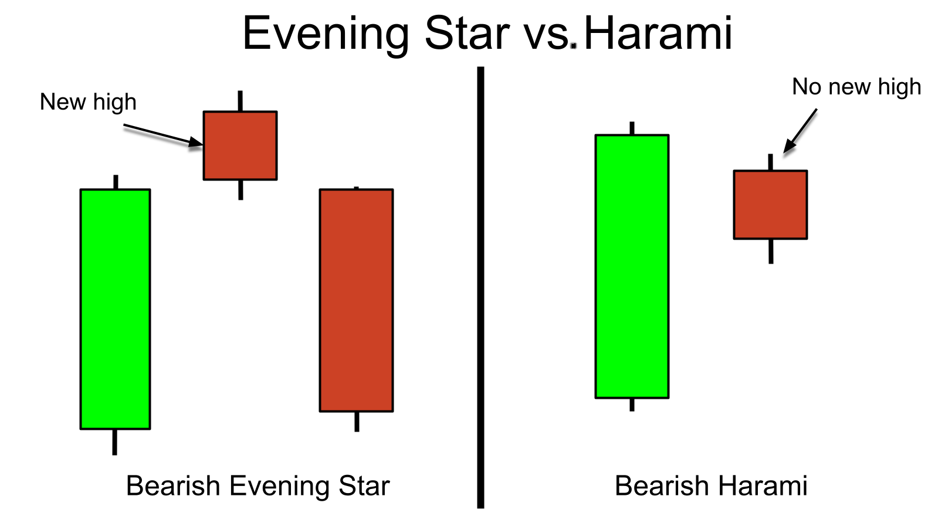 The biggest difference between these popular candlestick formations is that the evening star forms in three candles, while the harami forms in two.

There are a few differences between the evening star and triple top patterns. 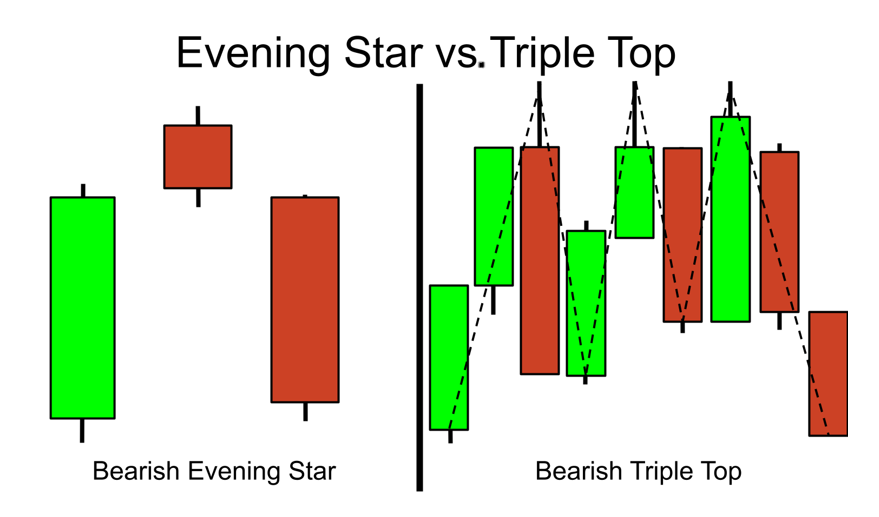 Secondly, the triple top requires a minimum of five to six candles to create. The evening star pattern is a small three-candle formation.

The three candles of the evening star candlestick pattern make it easy to spot and identify on a market chart. The evening star can help traders exit a bullish market or establish new short-sell trading opportunities. Sometimes the evening star can generate false signals, but when combined with other forms of technical analysis, such as horizontal resistance, it can reliably be used to signal a new downtrend.