What Is a Bear Flag Pattern? How to Use it to Trade Crypto Effectively

Spotting trends can be a challenging task for beginners. However, trends can help a trader to spot market movements — and come up with trading strategies that make big bucks when used correctly.

The bear flag pattern anticipates the continuation of a bearish downtrend, following a pullback, a temporary price reversal.

More often than not, experienced traders will spot trends in order to meet their investment objectives. Whether you’re a beginner or an experienced trader, here’s an overview of what you will learn about pattern trading:

What Is a Bear Flag Pattern?

A bear flag pattern is a formation that is usually distinguishable on the candlestick chart. It is formed from the flag pole, which is the steep downward move before the pullback, and the flag itself represents the actual retracement. 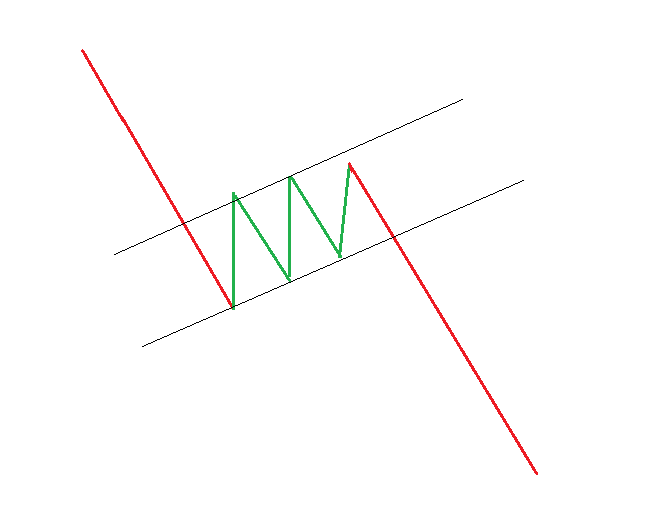 As it is a trend extension, the bear flag chart is regarded as a trend continuation pattern. Initially, the price pattern will trend downward until a new support level is formed.

This is when the flag emerges in the form of an upward consolidation channel. After a while, the price breaks below the support level of the flag and continues the bearish trend. This signals cryptocurrency traders to open short positions so they may benefit from the price decline.

Does Pattern Analysis Work on Crypto?

Cryptocurrency is often misunderstood as a complicated financial instrument to trade in the black market. In its purest form, cryptocurrency is much like forex. It is a medium of exchange, albeit not a legal tender.

Hence, most of the continuation patterns that work in the traditional forex market can be used for trading cryptocurrencies.

Still, Bitcoin and most of the altcoins are very volatile and unpredictable. This is why you should use risk management techniques.

To enhance the relevance of the bear flag, you can rely on technical indicators like moving averages and keep an eye on the volume indicator. Usually, the bearish volume increases as the flag’s pole is forming, until the consolidation. This indicates that the bearish sentiment is strong and that the consolidation might be temporary.

The bear flag pattern has been used for decades in the stock, foreign exchange and commodity markets, among others. Therefore, crypto traders have adopted the bear pattern, along with the bull flag, which we will discuss further.

How to Identify the Bear Flag Pattern

The bear flag pattern has two key elements: the pole and the flag. Other elements to pay attention to are the volume indicator and the breakout. Here is what you should look for on the chart:

First, you have to determine the flag pole, which coincides with the initial price decline driven by strong bearish momentum. At this point, the downward movement can be steep, while the volume indicator may ascend. 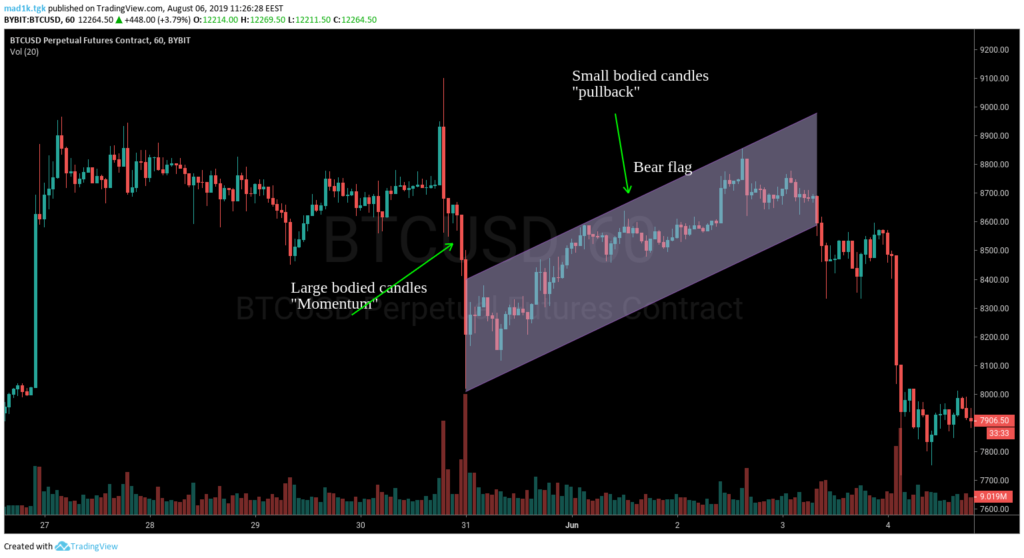 To recap, here are the main elements of the bear flag pattern:

The flag itself is looking downward and it represents a temporary correction. Once the price breaks above the flag’s resistance line, traders are interested in opening long positions. The rules of the stop-loss and the take profit are practically the same, only inverted.

What do Flag Patterns Indicate

The flag shows that an existing trend has reached the oversold (in the case of a downtrend) or overbought (in the case of a bullish trend) level. The market needs a rest. Thus, after a steep price movement, the price will move in the opposite direction for a while.

Once the pullback is over, the price continues to move in the direction of the current trend.

To get a better signal, it makes sense to combine the flag pattern with one of the oscillators. For example, you can use the Relative Strength Index (RSI). In a bullish market, the flag elements following the pole might show up during the overbought level. 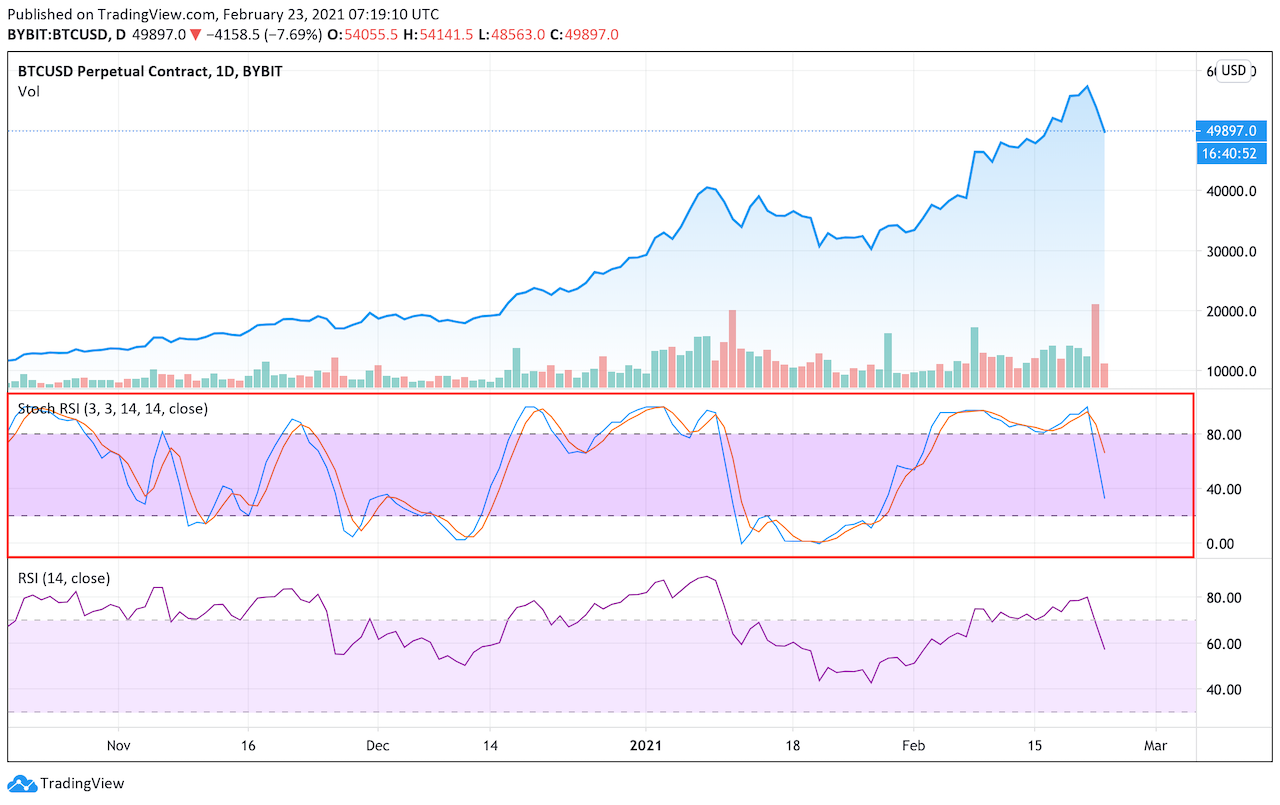 How to Trade Crypto With a Bear Flag Pattern

As compared to other chart formations, trading with the bear flag pattern is quite easy to comprehend. You can rely on the dynamics of the flag chart pattern alone to come up with a strategy to profit from the bearish market. Here are the key aspects of the standard trading system based on the flag pattern:

Entry: The flag is a continuation pattern, but that doesn’t mean you should place the short order right after the price breaks below the flag’s support. Instead, you should wait for the confirmation of the downtrend to avoid a false signal.

Traders typically wait for a candle to close below the flag’s support line and then go short during the next candle. Patience and discipline are very important, particularly for day traders, especially when trading volatile cryptocurrencies.

Stop-Loss Order: If the price is moving in an opposing direction, you should use a stop-loss order to limit potential losses. Traders typically place the stop-loss order above the resistance line of the flag.

Take Profit: As mentioned above, conservative traders tend to use the distance between the flag’s parallel trend lines to set the profit target. In our example, the difference between the two lines is $1,000, so we will add this amount to the price at the breakout entry point, which is $41,800. Thus, our price target is $40,800.

More aggressive traders can use the flag’s pole (without the flag itself) to set the price target. However, the price might find a support level earlier than that. A good recommendation is to check previous strong support levels. If there are any, they can work this time as well, defying the pattern’s prediction. 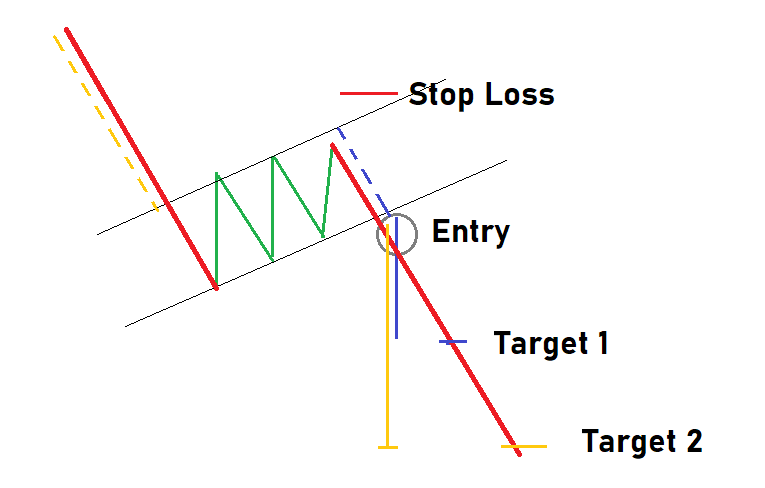 What Happens If There Is a Breakout?

Before placing an order, you should watch for the evolution of the bear flag pattern until the breakout point. A breakout occurs when a price movement exceeds the defined support or resistance level. The retracement of the flag should not be higher than 50% compared to the pole.

Ideally, the pullback should be less than 38% of the flag’s pole. If the breakout occurs during these conditions, you should be ready to go short. As mentioned, be sure to look out for a candle to close below the flag’s support, and open the short position during the next candle.

To succeed in trading with flag patterns, it’s wise to always use volume as a guide when making a decision on your entry and exit point of a target price. This will help you to confirm the breakout and to speculate as to the momentum after it.

Is Bear Flag a Reliable Indicator?

Yes, the bear flag is considered one of the most popular price action patterns, along with double top, and head and shoulders. Still, it doesn’t mean that all of the signals it provides will be 100% accurate, especially when you trade cryptocurrencies. To limit potential losses in case the price defies the pattern’s rules, use risk management techniques. The stop-loss is one of the most basic yet powerful risk management tools that you may implement. Another great method is to follow the 1% rule, which suggests that you should not spend more than 1% on a single trade.

Here are the main advantages of the bear flag pattern:

As with any pattern or technical analysis strategy, a trader should be aware of the risks accompanying trading patterns. Here are the main downsides of the formation:

While you might be tempted to trade with technical analysis on shorter time frames, the best results can be achieved on longer ones. For example, you can implement flag-related strategies on the H4 time frame and higher.

To minimize risks and potential losses, a savvy crypto trader will practice the pattern’s rules on a demo account, or start with small amounts of funds. This will help you to more easily identify the flag formations, and implement the rules accordingly.

Good luck in your trading journey!