The technical analysis proposes various tools to help traders determine trends and anticipate their reversals. Besides technical indicators, another great approach to analyzing the price action is the candlestick chart and its patterns.

As you may know, there are several ways to display the historical price of an asset, be it a forex pair, company share, or cryptocurrency. The three most popular chart types are the line chart, bar chart, and candlestick chart. Most traders prefer the latter since it can provide great patterns that anticipate trend reversals or continuations with a certain degree of accuracy.

What Is A Candlestick?

A candlestick chart is a method of displaying the historical price movement of an asset in time. Each candlestick represents a certain period, depending on the timeframe selected by the trader. For example, if you set the D1 chart, each candlestick stands for one day.

Researchers agree that a Japanese rice trader was the first to conceptualize candlestick. While the abstraction of candlesticks was subsequently reached to the Western world with Steve Nison’s book titled “Japanese Candlestick Charting Techniques.”

Here are several vital components that make the price analysis intuitive to comprehend the candlestick’s purpose.

The body represents the open and close price of an asset. The open or close points’ position depends on whether the candlestick and hence the price is bullish or bearish in a given period. In a bullish market, the close will be above the open and vice versa.

Each candlestick generally has two so-called shadows, or wicks, though this is not generally a rule. The shadows represent the high and low of a price for a given period. Thus, the upper shadow stands for the peak, and the lower shadow shows the lowest point touched by the price. Sometimes one of the shadows might be visible. It happens when the high or low coincides with the open or close.

The color of the body shows the direction of price movement. Usually, a green (or white) body suggests a price increase and a red (or black) body points to a price decline. You will most likely see green and red bodies on most platforms. Consequently, if the body is green, its upper limit will indicate the close price.

How Does Candlestick Work in Trading?

The candlestick chart is by far the most comprehensive style to display the price of an asset. Cryptocurrency traders borrowed this type of chart from stock and forex trading. Unlike the line chart, which shows only the close price, the candlestick chart provides a ton of information about the historical price thanks to its structure discussed above.

Candlesticks form chronologically one after another and may help you see the general trend and the resistance and support lines even without technical indicators. Besides this, they can shape certain patterns that act as buy or sell signals. The use of the candlestick chart is especially relevant to cryptocurrencies, which are highly volatile and require detailed technical analysis.

While there are plenty of candlestick patterns, we’ll list the most popular and reliable ones. Starting with bullish patterns, which show up after a downtrend and anticipate a reversal. Cryptocurrency traders usually open long positions when these patterns show up. 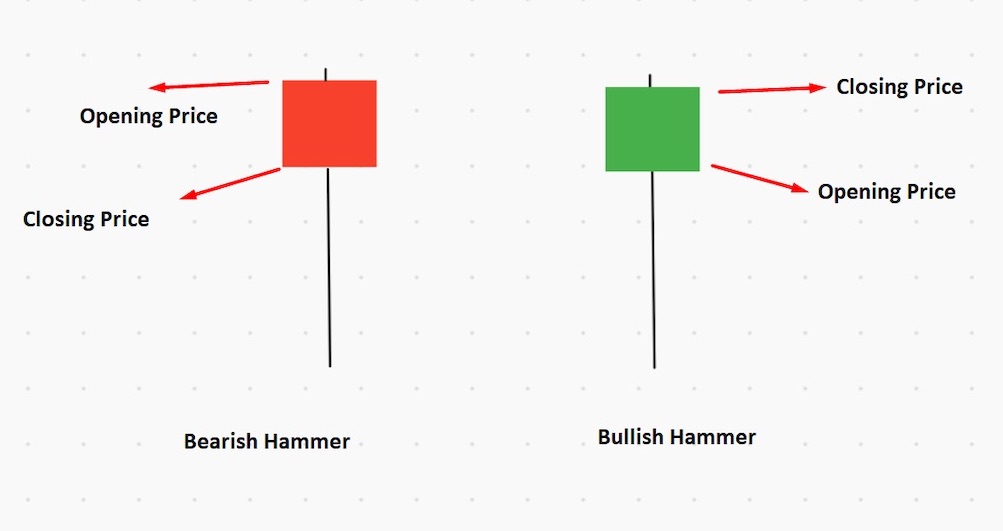 The hammer candlestick consists of a short body with a much longer lower shadow. As a rule, you will find it at the bottom of a downtrend. The pattern indicates that bulls resisted the selling pressure during a given period and pushed the price back up. While there may be hammer patterns with green and red candles, the former points to a stronger uptrend than red hammers.

The inverse hammer is quite similar to the previously described pattern. It is different from the standard hammer in that it has a much longer upper shadow while the lower wick is very short. The pattern suggests a buying pressure, followed by bears’ failed attempt to drag the price down. As a result, buyers come back with even stronger coercion and push prices higher.

Unlike the previous two patterns, bullish engulfing is made up of two candlesticks. The first candle should be a short red body engulfed by a green candle, which is larger. While the second candle opens lower than the previous red one, the buying pressure increases, leading to a reversal of the downtrend.

Another two-candlestick pattern is the piercing line, which may show up at the bottom of a downtrend, at the support level, or during a pullback. The pattern consists of a long red candle that is followed by a long green candle. The critical aspect of this pattern is that there is a significant gap between the red candle’s closing price and the green candle’s open price. The fact that the green candle opens much higher points to buying pressure.

The morning star pattern is more complex because it comprises three candlesticks: a long red followed by a short-bodied candle and a long green. Usually, the middle candle will have no overlap with the longer ones. The morning start suggests that the first period’s selling pressure is fading, and a bull market is forming.

Another three-stick candle is the three white soldiers. It is made up of three long green candles in a row, generally with microscopic shadows. The condition is that the three consecutive greens have to open and close higher than the previous period. It is regarded as a strong bullish signal that shows up after a downtrend.

Next, we’ll discuss another batch of bearish patterns that anticipate an uptrend reversal and usually come at resistance zones. These patterns generally prompt traders to either close their longs or open short positions. Here they are:

The hanging man is the same pattern as the hammer, only inversed. Thus, it is formed by a green or red candlestick with a short body and a long lower shadow. It shows up at the end of an uptrend. It suggests a considerable sell-off during a given period, but bulls could temporarily push prices higher, after which they lose control.

The shooting star is the opposite of an inverted hammer. It consists of a red candle with a short body and a long upper shadow. Generally, the market will gap a bit higher on the candlestick opening and will surge to a local peak before closing just below the open. The body can sometimes be almost non-existent.

The bearish engulfing is the inverse version of a bullish engulfing. The first candle has a small green body and is completely covered by the next long red candle. This pattern comes at the peak of an uptrend and suggests a reversal. The lower the second candle continues, the more momentum the bearish move will have.

Again, the evening star is the inverse version of the bullish morning star, and it represents a three-stick pattern. It consists of a short-bodied candle that comes between a long green candle and a large red candle.

The three black crows are like the bullish three white soldiers but only inversed. It comprises three long straight reds with short or almost non-existent shadows. Every new candle opens relatively at the same price as the previous candle, but it goes much lower with every close. This is regarded as a strong bearish signal. 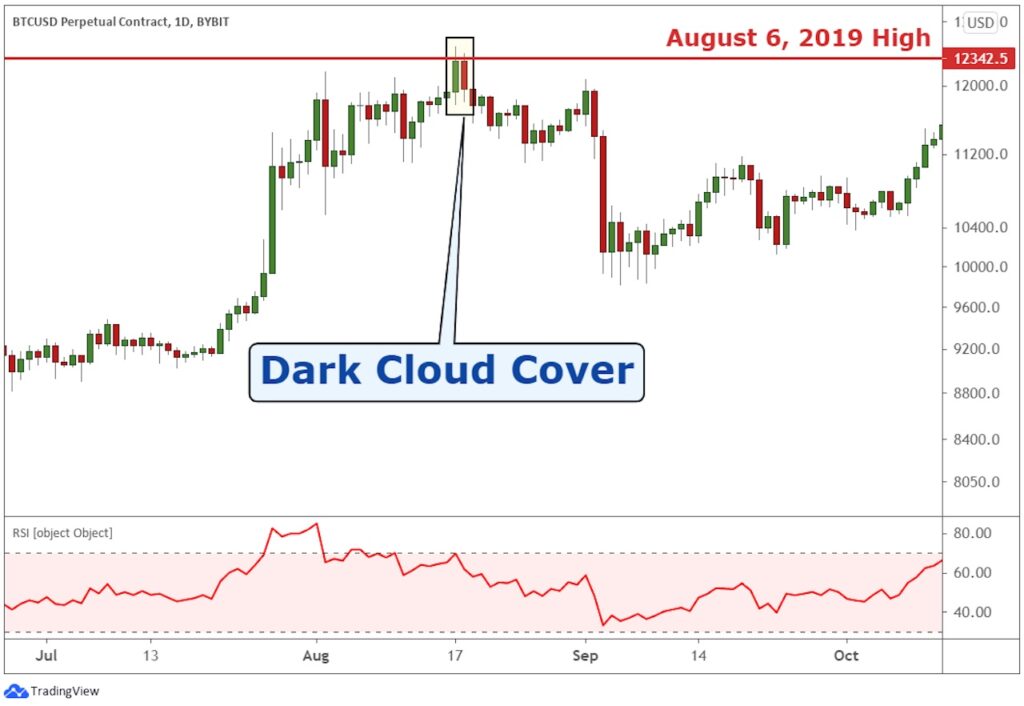 The dark cloud cover pattern anticipates a bearish reversal. The pattern comprises two candlesticks – a red candle that opens above the previous green body and closes below its midpoint. It suggests that bears have taken control of the market, pushing prices lower. If the shadows of the candles are short, then traders could expect a strong downtrend.

Besides the bullish and bearish patterns that anticipate trend reversals, there are also candlestick patterns that are neutral or point to the continuation of a trend, be it bullish or bearish.

Here are the four of them:

The Doji candlestick has an exceptionally small body and long shadows. While it is generally perceived as a trend continuation pattern, traders should be careful because it might also end up with a reversal. To avoid confusion, you should open a position a few candles after Doji when the situation becomes clear.

Like Doji, the spinning top is a candlestick with a short body. However, the two shadows are of equal length, leaving the body right in the middle. This pattern also indicates indecision and may suggest a period of rest or consolidation after a significant rally or price decline.

Falling three-method is a pattern consisting of five candles, indicating the continuation of a downtrend. It comprises a long red body, followed by three consecutive green bodies that are small and another long red body. The green candles are all covered by the bearish reds, demonstrating that bulls don’t have enough power to reverse the downtrend.

There is the rising three methods pattern as well, which can be observed during uptrends. The pattern comprises a long green followed by three small red candles and then another long green.

How to Read A Candlestick Chart?

Candlestick charts are easy to read after some practice, as they contain plenty of information related to historical price data. Besides the candlestick patterns that we discussed earlier, there are chart patterns formed by multiple candlesticks organized in a certain way. Some examples are double tops and double bottoms, flags and pennants, and more.

Even novice or advanced traders can read the candlestick chart by looking at the general trend visually. These visuals usually provide insights to help traders identify specific patterns in the candlestick and its formations, especially at resistance and support levels.

Here are a few terms that you should revise whenever you trade based on candlestick charts:

The Benefits of Using Candlestick Patterns

Candlestick patterns give cryptocurrency traders more clarity about the potential moves expected to come next. In other words, they act as trading signals that help traders decide when to open long or short positions or when to exit the market. For example, swing traders rely on the candlestick chart as swing trading indicators to determine the reversal or continuation trading patterns.

How to Memorize The Candlestick Patterns Quickly?

To spot the candlestick patterns quickly, a trader needs to familiarize themself through the practice of watching the chart and trade with small amounts of funds. A great way to start is by highlighting an individual candle formation and dissecting the candle for two-stick patterns.

It’s better to start with a pattern and learn it until you feel confident that you can easily spot it while the price is fluctuating.

Candlestick patterns should be in the arsenal of every cryptocurrency trader, including crypto day traders, because they show the same efficiency as in the forex or stock market.

While they can provide significant individual trading signals, we recommend combining these patterns with technical analysis indicators to confirm or invalidate them.

Can Candlestick Patterns Be Used to Predict Market Turning Points?

Yes. Some candlestick patterns are used to do precisely that – predict trend reversals. However, it doesn’t mean they have a 100% success rate.

Is the Candlestick Chart Different From a Bar Chart?

Yes – the candlestick is different from the bar chart, but they share some similarities because they both display the same amount of price data. However, most traders agree that candlestick charts are easier to read.