Lightning Network: Is It a Scalable Solution for Bitcoin?

Bitcoin (BTC) is a type of digital currency whose peer-to-peer (P2P) technology allows users to engage in transactions with greater speed and efficiency. The gradual adoption of Bitcoin and cryptocurrency in general by financial institutions — and payment giants like PayPal and Square — signals a broader acceptance within financial services, pushing crypto’s evolution to better support its networks.

Essentially, this brings us to the Lightning Network, a second-layer protocol that operates alongside Bitcoin to enhance speed, versatility and privacy and reduce cost.

What Is the Lightning Network?

The Lightning Network is a secondary layer protocol that runs on top of the Bitcoin blockchain to scale transaction verification. It reduces costs and traffic congestion on the Bitcoin network’s base layer.

As the name suggests, the Lightning Network is designed for processing transactions in a nearly free and instant manner by taking them off-chain. It exists separately from Bitcoin’s primary network, using its software and nodes to communicate with the network and exchanges as it finalizes transactions.

Similar to the Bitcoin network, the Lightning Network is made up of nodes. However, it uses smart contracts to process a transaction without being recorded on the blockchain. Each transaction is accessible privately, only to the transacting parties, and each node uses Lightning Payment Channels to execute payments. The built-in features help prevent either user from cheating or altering any data contained in the channel, and the speed of payments is limited only by that of their Internet connections.

Supposed Alex wants to pay Kim in BTC via the lightning network, they could first lock up their BTC in a unique 2-of-2 multisig address by first opening a direct lightning channel that enables them to initiate the transaction by keeping a private ledger off the main-chain. At the off-chain lightning channel, the funds in the pool are divided into two parties — Alex’s and Kim’s funds. The initial balance of the pool is 2 BTC (1 BTC each), Alex pays Kim 0.5 BTC on the Lightning Network and left with 0.5 BTC, Kim then received 0.5 BTC and her current balance is at 1.5 BTC. Once the channel is closed, the microtransactions are consolidated into a single transaction, which is then verified, processed, and added to the on-chain blockchain which their balances will be updated accordingly.

However, if either Kim or Alex does not have a direct channel, the transaction is routed to Jack using a type of smart contract — hashed time-locked contracts (HTLCs). The contract is used to promise Kim that she’ll receive her BTC and Jack has to prove that he paid the agreed amount to Kim. In return, Jack will receive a small fee for executing the order.

First proposed in 2015, the Lightning Network was the brainchild of Thaddeus Dryja and Joseph Poon. The two researchers described the off-chain protocol, designed to operate using payment channels, in their paper entitled The Bitcoin Lightning Network. Using these channels, untrusted parties could make small transactions indefinitely without adding traffic to the mainnet. A year later, Dryja and Poon, along with others, founded Lightning Labs, which further developed the concept and eventually unveiled the Lightning Network after the SegWit soft fork.

Recently, the Lightning Network’s growth has increased rapidly, thanks to El Salvador’s adoption of Bitcoin as a legal currency. Since then, the popularity of the Lightning Network has skyrocketed and its capacity has grown by nearly 50 percent, adding 15,000 new participating nodes and 1,500 bitcoins to the system.

While Bitcoin is convenient and easy to use, its limitations have led to some wariness regarding its adoption as a currency. Consequently, BTC isn’t accepted everywhere, and its value tends to fluctuate according to demand, with built-in deflation. If a file is lost or a hard drive crashes, the wallet contained therein disappears, too, with no way to recover the lost funds. There’s also no buyer protection when goods are purchased with BTC.

Perhaps the biggest limitations of Bitcoin, however, are linked to its speed, cost and scalability.

Bitcoin transactions are verified and recorded in blocks. A new Bitcoin block is created every ten minutes, and each block contains a specific number of transactions. Miners prioritize transactions based on fees, which means that you might find yourself bidding against other users to ensure your transactions are processed promptly. That means, the higher the fee rate, the faster the transaction will be processed.

During slower periods you can expect your transaction to be processed on time, but during busier days or hours, you may be waiting a long time — or facing high fees as miners race to get through multiple transactions in the mempool.

However, the fees incurred for using the Bitcoin Lightning Network only need for:

As long as the channel is open, you can make multiple transactions. The only fees you pay are those due when you open and close the channel.

The capacity for Bitcoin growth is limited, in other words, it has a scalability problem. Bitcoin’s blocks have a size limit of about 1 MB, and they’re generated only about every 10 minutes with a processing speed of about seven transactions per second (TPS). Compare this to Ethereum, which processes almost double that number (before its upcoming ETH 2.0 transition to PoS consensus), while VisaNet can process up to 24,000 TPS.

The scalability problem first became apparent in 2015, with a variety of solutions being offered, including increasing block size. The Bitcoin Cash (BCH) hard fork occurred a couple of years ago, and that same year, segregated witness (SegWit) was also implemented as a potential solution to the overall Bitcoin capacity issue.

The Bitcoin network’s base layer is characterized by the technological framework that supports the network, as well as the monetary application. It’s used to verify and complete transactions, but as has already been discussed, it has limitations, particularly Bitcoin’s capacity and cost. The second layer protocol is designed to address these limitations.

A second layer protocol is also known as an off-chain solution. It’s decentralized, much like the main blockchain, and offers the same security protocols, but its primary purpose is to solve the scalability issues of conventional blockchain technology.

On a decentralized network, global consensus is essential, and all participating nodes carry a complete copy of transactions for verification purposes. This prevents double-spending, without having to rely on a central authority or regulatory body.

The base layer is the primary (or Layer 1) security layer, which creates an immutable record of the data. The blockchain acts as the base layer. The second layer protocol decreases the amount of data on the blockchain by allowing for off-chain transactions.

With a second layer protocol, basic computations can be run off-chain while the transactions are still anchored to the blockchain. This minimizes the amount of data stored on the base layer, freeing up critical resources without compromising security. In other words, blockchains with second layer protocols are more usable and scalable, and thus capable of competing with larger and more centralized systems.

Both Bitcoin and Ethereum have unveiled second layer protocols to improve speed and scalability. Ethereum has a variety of solutions, including Polygon and Arbitrum. Ethereum’s Layer 2 protocols are designed to address scalability and cost concerns by enabling off-chain computation. However, many of these technologies are still in development and not yet ready to use, with the anticipated rollout of Eth2 (or ETH 2.0) still ahead.

The Lightning Network uses smart contracts to enable near-immediate and low-cost transactions, along with cross-platform “atomic swaps” in which users can trade one coin for another without using an exchange.

Segregated Witness, or SegWit, is the most prominent Bitcoin protocol upgrade to date. It effectively segregates transaction data from witness data, so that each transaction on the blockchain consists of two parts:

SegWit is a soft fork, or backward-compatible change of code, which splits transactions into two segments. It moves the witness data (or signature) from the original segment to the witness segment.

The implementation of SegWit essentially doubles block size, upgrading it from 1 MB to 2 MB while requiring no major changes to the existing code. Although SegWit doesn’t necessarily solve the scalability problem, it does enable second-layer solutions such as the Lightning Network.

By consolidating numerous microtransactions into a single one, the Lightning Network can reduce network traffic. Taking these microtransactions off the main network ensures ample space for larger, higher priority transactions and enhances processing speed.

How Can a User Benefit from Bitcoin’s Lightning Network?

The biggest pros of the Lightning Network are its speed and affordability. As mentioned above, on the Bitcoin network’s base layer fees and waiting periods can be prohibitive. However, with the Lightning Network, you can send and receive small payments in a way that is simply not feasible on Bitcoin’s network. You can swap payments numerous times before closing the channel and completing a single transaction, all for one fee. 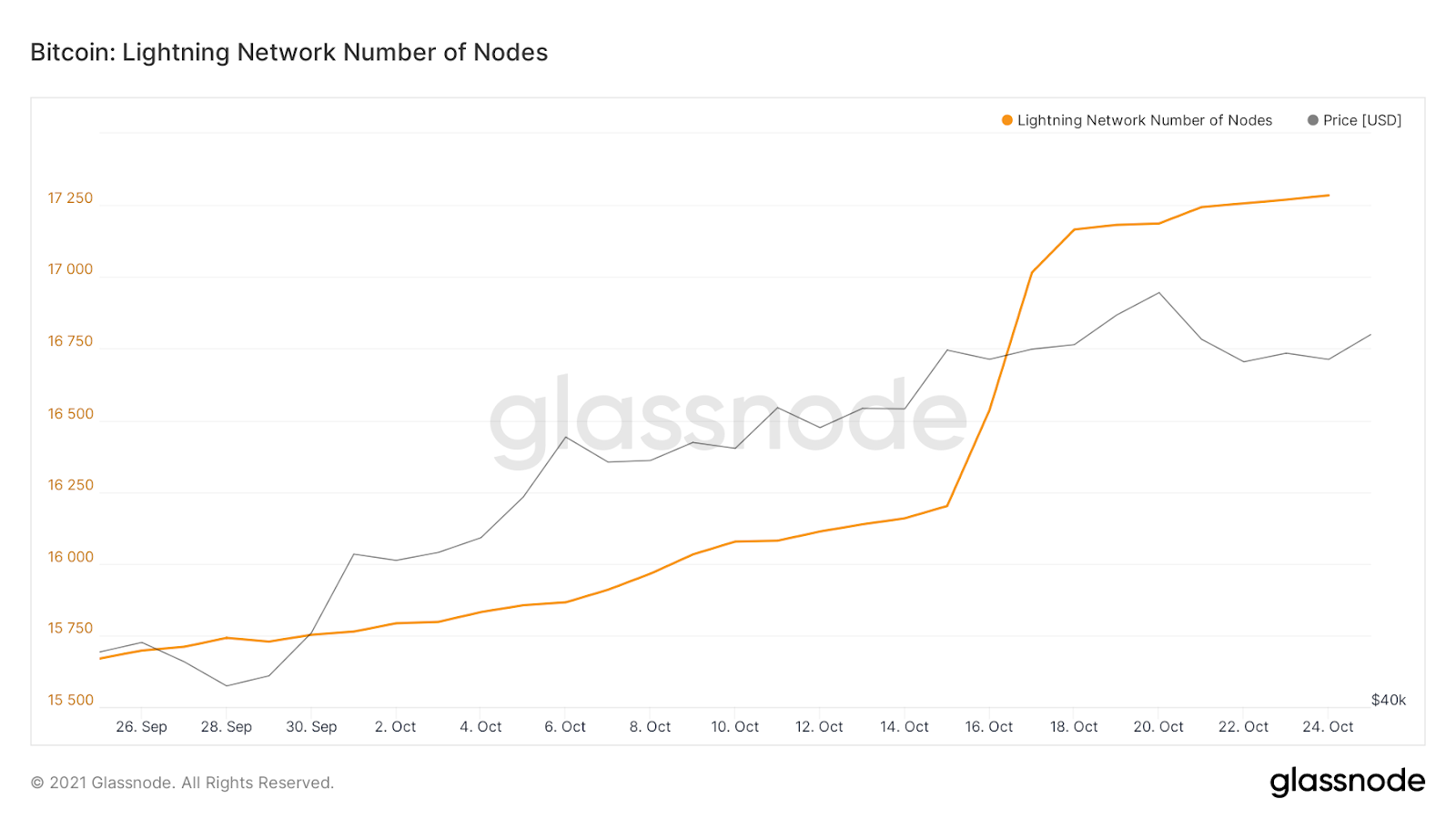 The increase of nodes and channels on Bitcoin’s network allows it to increase its capacity for bitcoin transactions. As its capacity continues to expand weekly, and more people are adopting the technology, thus making it a critical asset to the Bitcoin ecosystem. The Lightning Network just might prove to be the pivotal method which solves Bitcoin’s scalability issue. 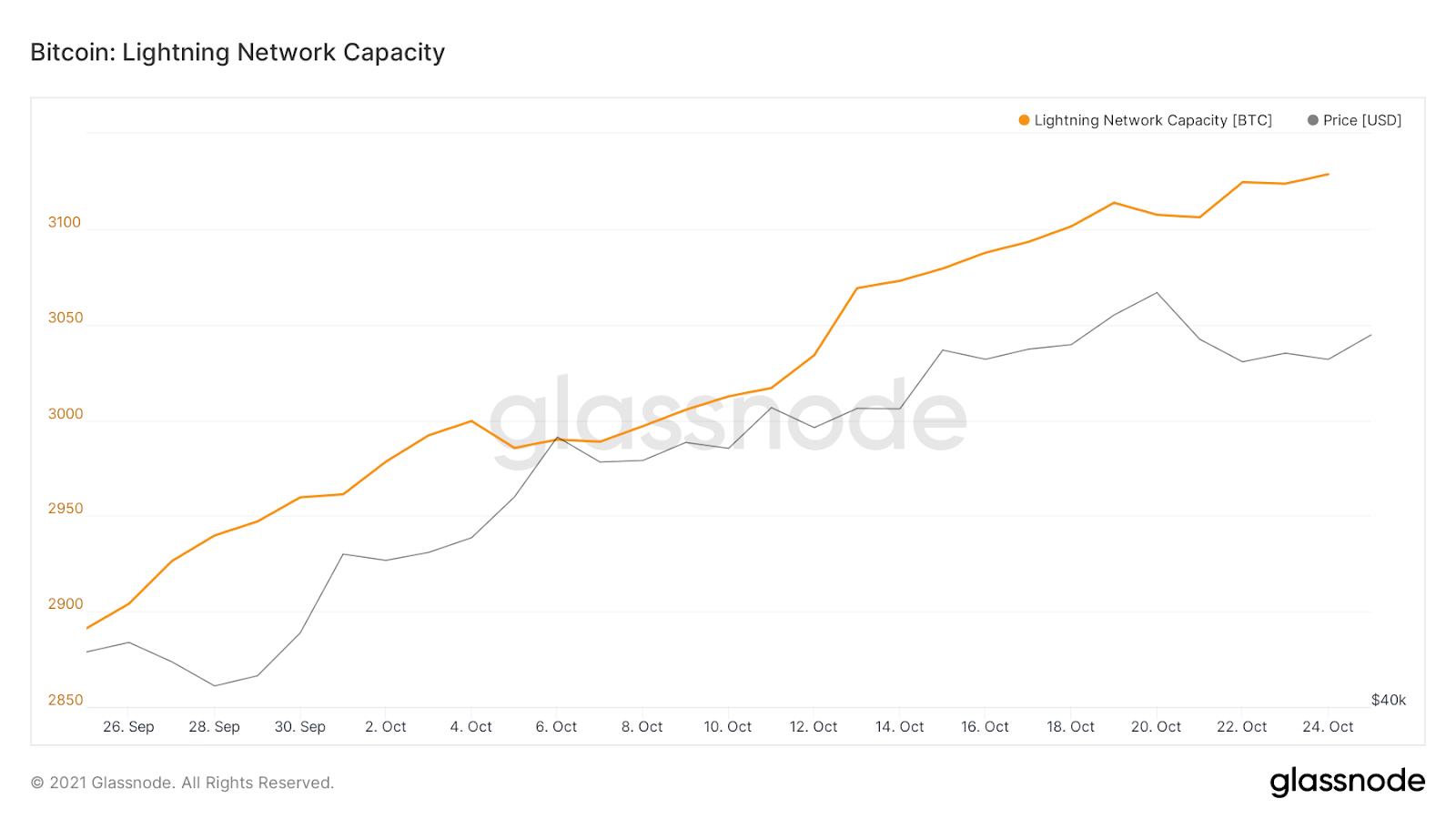 When compared to the Lightning Network’s capacity of over 1,000 bitcoin just about a year ago, the capacity has increased to over 3,000 BTC as of Oct. 24. That also translates to the higher scalability of the Bitcoin network as a payment system.

Users have more flexibility with Bitcoin and Lightning, given the option to use technology with which they’re already comfortable and familiar and transferring currency more efficiently and affordably.

Cons of the Lightning Network

Users also need to have a traditional Bitcoin wallet that’s compatible with the Lightning Network. To open the payment channel, users must then lock some of their BTC to begin processing transactions. This can be both inconvenient and expensive. Also, users cannot simply remove funds from the payment channel, and channels must be closed in order to use the transferred funds.

The increased anonymity that the Lightning Network allows is part of the appeal for some users. But for others, it can be a major drawback, especially for mainstream crypto users — and regulators. 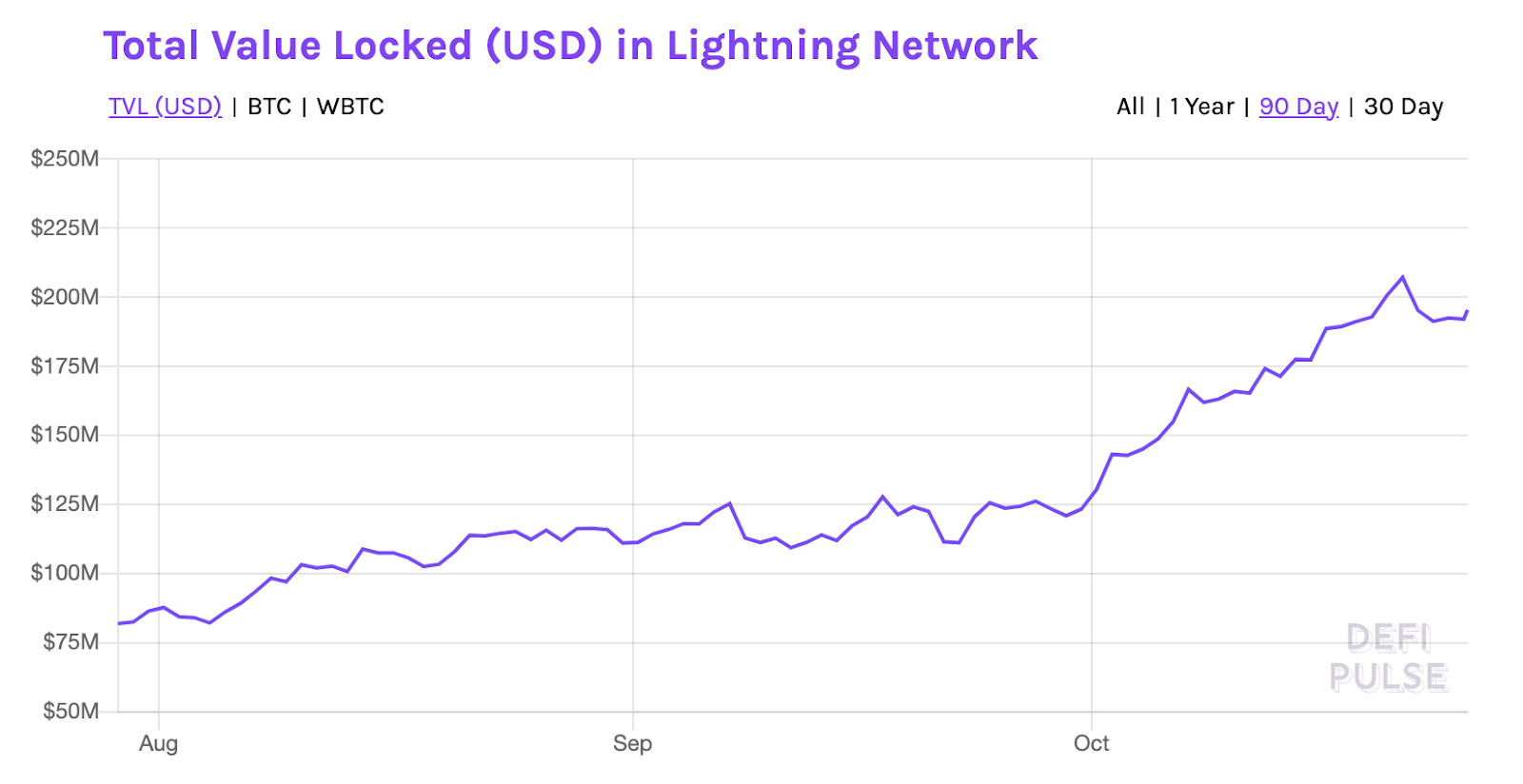 More than $190 million is currently locked into the Lightning Network’s system, with people using the Layer 2 solution to pay for goods, services, apps and more.

While it does have some limitations, requiring compatible and optimized wallets and individual payment channels, it provides users with more options and versatility. As people increasingly adopt it to make lightning-quick micropayments, developers will continue developing compatible wallets and support systems to build and strengthen the network.