What Is Dogechain — And How Does It Relate to Dogecoin?

If you’re active on Twitter, you’ve probably seen news about a project called Dogechain that was recently launched. Its name bears an uncanny resemblance to the official Dogecoin blockchain explorer. For the uninitiated, Dogecoin is a leading meme coin created by two software engineers as a joke. However, contrary to popular belief, Dogechain is not a project launched by the same software engineers. Curious to find out more? Read this article to understand what Dogechain is — and why it was created.

Dogechain, not to be confused with the official Dogecoin blockchain explorer, is an unofficial Layer 2 solution for the Dogecoin project. It’s an EVM-compatible decentralized blockchain that runs on the Polygon network and aims to bridge over Dogecoin, allowing Dogecoin users to access the growing decentralized finance (DeFi) ecosystem.

As mentioned above, Dogechain isn’t affiliated with Dogecoin. Instead, it's a separate community-first blockchain that aims to empower Dogecoin holders. Using the bridge, Dogecoin holders can access blockchain games, NFTs and various types of DeFi apps. They need some kind of a bridge, because Dogecoin is mainly used for payments and purchases only. Since Dogecoin has limited benefits, the founders of the Dogechain project aim to complement the original Dogecoin cryptocurrency so it can be used for other purposes beyond its initial use.

In other words, this new project seeks to bring scalability, security, robustness and utility to the Dogecoin network.

Why Was Dogechain Launched?

The idea of launching Dogechain may be puzzling for anyone who’s seen Dogecoin surge to new heights. Why would anyone need to improve a popular project like Dogecoin, which has already proven immensely successful?

In hindsight, the popular Dogecoin has its limitations that need to be solved. Let's talk about these limitations first.

When it launched in 2014, Dogecoin gained tremendous popularity due to the whimsical meme that most people could identify with. At the time, the project looked very promising because it tried to replace typical cash with crypto cash. Moreover, the internet meme, Doge, was already a huge hit among early crypto users.

As a result, Dogecoin became an instant success. In the following years, the value of the coin grew tremendously with the backing of global influencers like Elon Musk and Snoop Dogg. To this day, the popularity of Dogecoin remains intact. Dogecoin is popular because it has achieved its initial aim to transform itself into a popular crypto used for online transactions.

Despite the overwhelming success of Dogecoin, its age is starting to catch up with it. It needs an overhaul because Dogecoin is mainly used as a means of online payment. These days, almost all of the major coins offer this function. Therefore, Dogecoin won’t evolve simply because its followers love participating in the meme culture with which it’s associated.

This is where the Dogechain project comes into play. Dogechain is an EVM-compatible blockchain that runs on the Polygon Network. The Dogechain team created this blockchain to bridge over Dogecoin, allowing Dogecoin users to access the growing DeFi ecosystem.

Dogechain isn’t a Layer 2 network, nor is it associated with Dogecoin. Instead, it’s a kind of bridge that will let Dogecoin holders transfer their tokens to the Dogechain so they can buy NFTs, develop GameFi apps and participate in various types of DeFi projects.

According to the white paper released by the official Dogechain community, the project aims to expand the use cases for Dogecoin by improving its utility. Consequently, Dogecoin users can participate in various types of DeFi projects by wrapping their DOGE tokens into Dogechain smart contracts to receive wrapped Dogecoin (wDOGE) proof of stake (PoS) tokens. These wDOGE PoS tokens live on the Dogechain network. If required, the wDOGE PoS tokens can be converted back to Dogecoin.

Here are typical use cases of wDOGE PoS tokens:

Besides these benefits, there are many other reasons why you may want to take a closer look at Dogechain. For instance, it offers a superior alternative to Dogecoin's proof of work (PoW) Scrypt mining algorithm. Dogecoin's algorithm is difficult to scale for mass usage, so the Dogechain bridge can solve such constraints.

Similarly, the existing setup of Dogecoin is extremely resource-intensive. It’s believed to consume 6.54 TWh to operate, which is equal to the energy consumed by a small country. The growth of Dogecoin means that it will leave a heavy carbon footprint. Dogechain deals with this dilemma by offering a less energy-intensive alternative.

Finally, the Dogecoin PoW consensus mechanism cannot scale fast enough to meet the demands of millions of simultaneous transactions. Therefore, it's the right time for a complementary blockchain that can perform quick transactions and enable smart contract functionality.

How Does Dogechain Work?

Using the protocol has certain advantages. For instance, Polygon Edge is EVM-compatible. This means that developers can create tokens on the blockchain using the popular ERC-20 protocol. Likewise, the framework enables Dogechain to use the PoS mechanism, which is faster, scalable and more eco-friendly than the PoW used by Dogecoin. Above all, the framework boasts smart contract capability, allowing token holders to pay for gas with DOGE.

Dogechain also uses EVM, the Ethereum virtual machine, which is at the core of its operations. Using EVM, developers can quickly build and deploy solutions since they don't need to do everything from scratch.

Overall, the combination of the Polygon Edge framework and EVM helps Dogechain enhance Dogecoin to a level that isn't possible without integrating such high-end technologies.

It's also worth noting that Dogechain’s architecture is distinct from that of all other blockchains. While it's built using Polygon Edge, the blockchain doesn’t use Polygon's "security as a feature" function. Instead, it relies on its own sets of validators to achieve security. Similarly, the checkpoint mechanism and mainchain contracts features of Polygon are also disabled.

The cross-chain protocol is another important component worth discussing. It links the original Dogecoin blockchain to the Dogechain.

Following are some of the primary features of the cross-chain protocol:

How Does Dogechain Relate to Dogecoin?

Dogechain is not in any way affiliated with Dogecoin. Instead, it's a separate project which aims to enhance the capabilities of Dogecoin by offering greater utility for Dogecoin.

Since the relationship between the two different blockchains is often confusing, the founders of Dogecoin, Jackson Palmer and Billy Markus, had to clarify the ambiguity caused by the launch of Dogechain.

The buzz surrounding the launch also forced the Dogecoin Foundation to retweet their announcement to their followers. For instance, a tweet on August 16, 2022, stated that "Claims in paid media that Dogecoin launched a ‘Dogechain’ test network are false. Neither @Dogecoin /@dogecoin_devs , nor @BillyM2k, @ummjackson or others associated with @DogecoinFdn are in any way affiliated with the token." 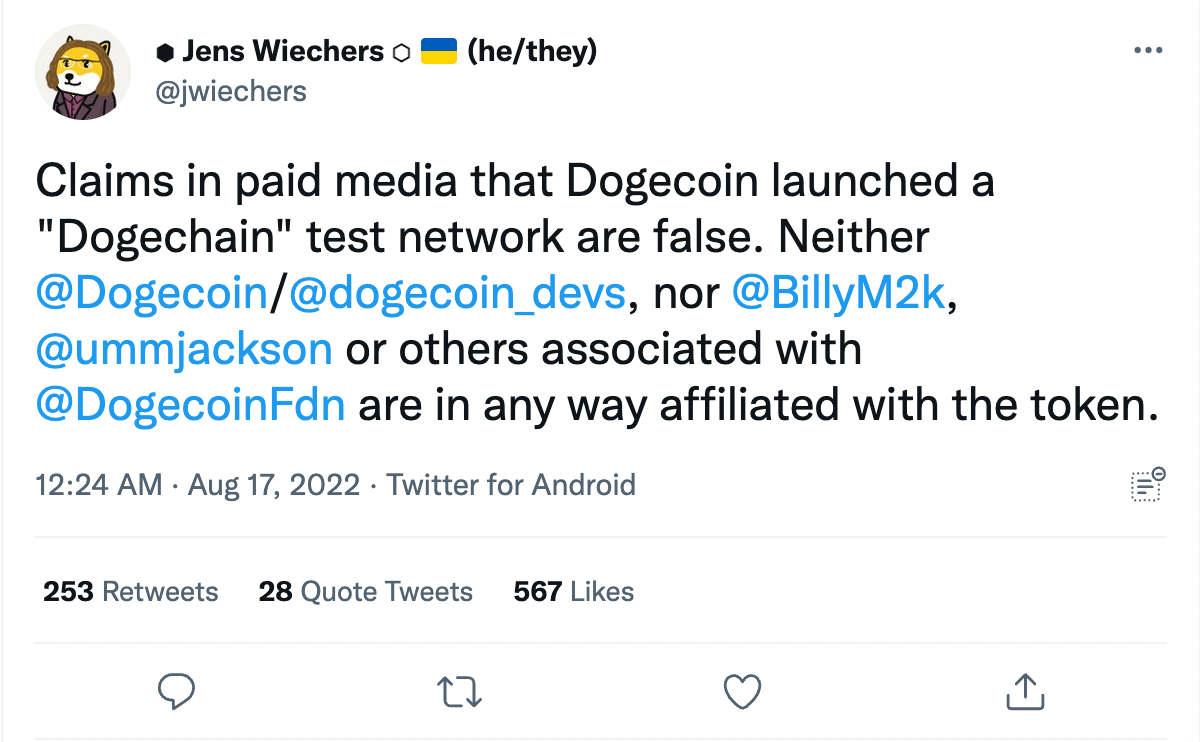 On August 26, 2022, a Twitter user named @RepeatAfterVee also shared that Dogecoin developer and founder Markus has rejected an offer of 10 billion DOGE tokens to promote Dogechain, much to the happiness of the Dogecoin community. This amount is currently worth approximately $14 million. 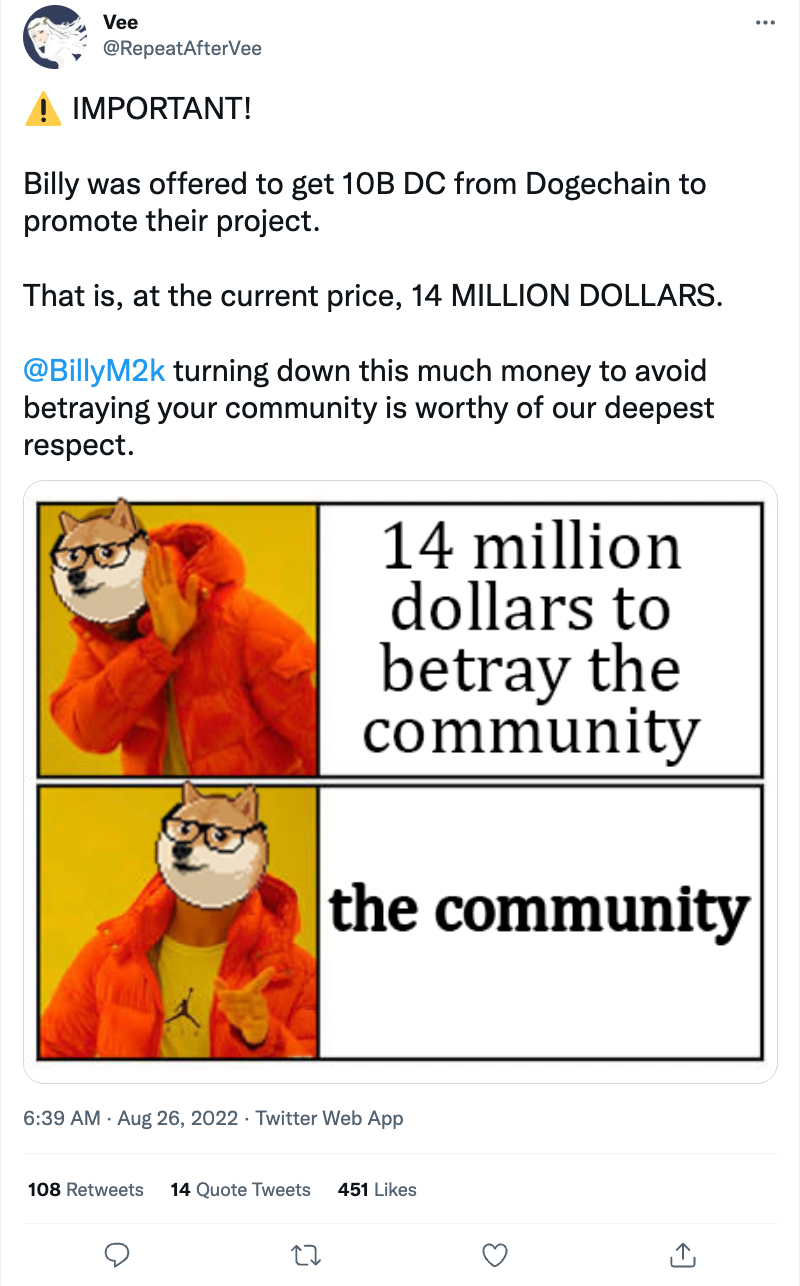 Impact of Dogechain on Dogecoin

While the two projects aren’t related to each other, the future impact of Dogechain on the Dogecoin token is fairly inevitable. Even before the launch of its official token, errant rumors that Dogechain is a Layer 2 network of Dogecoin pumped up the price of DOGE by nearly 11% in a single day. Since then, DOGE’s price has retraced its original trajectory.

While Dogechain has been confirmed to not be an official Layer 2 network of Dogecoin, it doesn't mean that investors have stopped taking notice of Dogechain — because the value of the project’s own native crypto, the DC token, has multiplied six times in the initial five days of its launch, from $0.0007294 to $0.004501. This clearly shows that investors are keenly watching the development, irrespective of the ownership.

Here are four important features of Dogechain to help explain how it plans to evolve:

The IBFT consensus allows everyone in the community to participate in the network without strict terms and restrictions, thus giving rise to a permissionless and decentralized blockchain. IBFT is one of the many flavors of PoA, the proof of authority algorithm. In simple terms, it tries to overcome shortcomings of both PoW and PoS. Benefits of IBFT include immediate block finality, reduced time between blocks, high data integrity, fault tolerance and operational flexibility.

The main advantage of EVM compatibility is the ease of achieving interoperability with the Ethereum ecosystem. Dogechain is EVM-compatible, which means that any existing Ethereum smart contracts are easily migrated to Dogechain without modification. Without EVM compatibility, it would be difficult for new users to build new wallets, interfaces and DApps.

Just like other decentralized protocols, the Dogechain framework is built around decentralization. This means that token holders can propose new projects, voice their opinions, influence decision-makers and vote on blockchain parameters.

Use Cases of Dogechain

Dogechain is specifically designed for Dogecoin holders so they can easily gain access to NFTs, games and DeFi protocols and apps without abandoning Dogecoin. Let’s take a look at some of the following use cases.

The ERC-721 protocol allows Dogechain users to publish their own NFTs. You can think of ERC-721 as a more advanced version of ERC-20. It lets you integrate your NFTs into the existing NFT landscape.

Dogechain is an EVM-compatible blockchain, which means that it’s compatible with a wide variety of popular crypto initiatives. For instance, you can seamlessly integrate DeFi protocols such as Uniswap and SushiSwap with Dogechain. Similarly, you can lock the native currencies, DC and wDOGE, in various liquidity pools.

You can also build an entire DeFi universe on the Dogecoin platform. In addition, Dogecoin holders can use wDOGE and DC cryptocurrencies to participate in virtual gaming events, or to share digital resources.

DC is the primary governance token for the Dogechain blockchain. Besides serving community initiatives, it will act as the "go-to-token" for fueling transactions, smart contracts and DApps in the wider DeFi ecosystem.

After the first phase, DC will take over as the main token on the platform. The launch of DC occurred on August 24, 2022. According to the Dogechain website, three percent of $1 trillion, the total supply — or 30 billion tokens — will be airdropped to early users. Fifteen percent of these (or 4.5 billion tokens) will be released immediately on September 1, 2022, while the remaining 85% will be unlocked monthly over the next 12 months.

The website also mentioned that there will be future airdrops for Dogecoin holders to receive free DC tokens later this year, so you can certainly stay tuned to their official Twitter page if you missed out on this airdrop.

Dogechain’s blockchain mainly uses the slashing protocol to safeguard itself from threats and malicious activities. The slashing mechanism not only protects the blockchain, but also penalizes dishonest behavior via disciplinary actions. Anyone can submit evidence of slashing. However, the evidence must be accompanied by proof, and is subject to fees.

While there are plenty of safety procedures in place, it's reasonable to suggest that Dogechain is still a relatively new infrastructure that’s prone to instability. Furthermore, since it's not a Layer 2 network of Dogecoin — and the founders of Dogecoin have explicitly said that they aren’t affiliated with this project — you must use necessary precautions when bridging to transfer assets.

Some of the original blockchains that focused primarily on payment processing are now looking for additional ways to scale. To solve the scalability issue, many of them have turned to Layer 2 networks.

Since Dogecoin also needs a solution in order to scale, the Dogechain project may be a blessing in disguise. In fact, Dogechain may be a better solution than a Layer 2 network, because it lets the Dogecoin ecosystem expand without using native resources. If you decide to invest in Dogechain, do so at your own discretion, and as always, do your own research.