What Is Blockchain? A Beginner's Guide

Anyone who has even a passing interest in cryptocurrency has probably heard the word “blockchain” bandied about. No doubt, many of those who know the term also know that blockchain technology is behind Bitcoin and many other cryptocurrencies. But what else do you know about blockchain? How does it work? What uses does it have? And what about blockchain’s prospects in the future? All is revealed in this article.

Blockchain technology can be defined as a system of decentralized digital public ledgers that store transactions. This transactional information is stored in chains of blocks — hence the name “blockchain.” These computers on the network share this information through cryptography.

Blockchain is used for a variety of functions. In addition to cryptocurrency, it’s also used for things such as healthcare, smart contracts, supply chains, and electronics. Let’s take a look at how blockchain works.

How Does Blockchain Work?

All information on a blockchain is stored in digital files called blocks. These blocks aren’t owned by any central entity; hence, they are decentralized. Several elements make up the workings of the technology behind blockchain.

The whole premise of blockchain is focused on its decentralized nature. It is this idea that gave birth to Bitcoin in 2009. Preceding this, on October 31, 2008, was the publication of the Bitcoin white paper, entitled Bitcoin: A Peer-to-Peer Electronic Cash System, by its pseudonymous creator, Satoshi Nakamoto. This document lays out how Nakamoto envisaged blockchain technology would work and his vision for a monetary system away from the reaches of banks: a system for the people.

Nakamoto proposed a “purely peer-to-peer version of electronic cash that would allow online payments to be sent directly from one party to another without going through a financial institution.” On January 3, 2009, the genesis block on the Bitcoin blockchain was created. This was the first step in revolutionizing traditional, centralized bank-focused financial systems as we know them.

Nodes are computers that connect to each other to share information through the public ledger that is a blockchain network.

Each node stores a copy of the blockchain and verifies every transaction made on it. Information tampering is a rare occurrence, as the information and records for every node on the blockchain would need to be altered.

These nodes play an important part in the Bitcoin mining process because, in the absence of any central entity, it is the job of these nodes to align in agreement to confirm the validity of a transaction on the network. Only when this verification happens can a block be added to the blockchain, and miners get their rewards (on the Bitcoin blockchain, this is currently 6.25 BTC after the most recent Bitcoin halving.) These nodes “agree” to validate transactions through consensus mechanisms, generally Proof of Work (PoW) and Proof of Stake (PoS). PoW consensus is used by Bitcoin and many other cryptocurrencies, such as Litecoin, which is a “fork” or spin-off of Bitcoin.

While PoW and PoS are the main two consensus mechanisms in crypto, others exist as well.

Delegated Proof of Stake (DPoS): This is different from POS in that delegates are effectively elected to mine new blocks and ensure consensus rules are maintained. If they fail to do their job properly, they can be voted out, the same way politicians can be. Cryptocurrencies such as EOS use this consensus mechanism.

The process of cryptographic hashing is fundamental to ensuring the security of a blockchain. It involves one-way encryption of data to a unique piece of text and is a process that cannot be reversed. On the Bitcoin blockchain, the result of the hashing process is a 64-character piece of text called a hash.

Can Blockchain be Hacked?

As each unique piece of digital text cannot be reversed to decipher the original data, blockchain is considered to be very safe from hackers. On cryptocurrency blockchains, hackers can launch something called a 51% attack, where they attempt to gain more than half the hash rate (computer power) of a blockchain’s network. If they are successful at doing this, they can block transactions — or even reverse previously confirmed transactions, meaning they can “double-spend” coins (spend a coin twice).

Although the Bitcoin network has never been subjected to a successful 51% attack, other cryptocurrencies have fallen prey. One such example occurred in May 2018, when the Bitcoin Gold network succumbed to a 51% attack, resulting in the loss of $18 million worth of its currency. Thankfully, such events are rare, due to the sheer amount of hash power needed to conduct an attack. While the hacking of a blockchain isn’t impossible, it’s very unlikely.

How is Blockchain Used?

We all know cryptocurrencies use blockchain, but what else in the world benefits from the wonders of blockchain technology?

As we’ve already seen, blockchain forms the fundamental underpinning of what defines a cryptocurrency: a decentralized asset, free from the shackles of a central entity such as a bank or governmental institution. Bitcoin may be the most popular cryptocurrency, but really it’s just the tip of the iceberg. A multitude of coins — from altcoins to stablecoins to DeFi tokens — are in existence today, thanks to the technology invented by Satoshi Nakamoto.

Sensitive medical data from patients’ electronic health records (EHRs) has been the target of hacking, used to steal or impersonate identities, or sold to third parties.

Through advanced cryptography, blockchain can put an end to this. Records can be added to a trusted and secure blockchain, becoming longer over time. When new records are added, a consensus is needed — thus making the chain very difficult to hack into or break.

Health Wizz is one company that’s using blockchain to give patients complete control of their medical data. A decentralized mobile platform, allows patients to manage their health information and sell it to third parties, if they wish, in return for tokens.

There are also shortcomings to EHRs, in terms of doctors accessing patient information that comes from another institution. This is because in some countries, different manufacturers often provide different EHR software for various institutions, and there isn’t interoperability between them. Although a single, comprehensive system would be beneficial to doctors and patients, this would reduce companies’ ability to charge exorbitant fees.

Attempts have been made to bring together EHRs in many countries under one system, but this has often proved to be a doomed process. In the U.K., an attempt to create a linked patient data system for the whole of the National Health Service was abandoned in 2011, costing nearly £10 billion.

Blockchain could allow for a singular patient-owned EHR system in which patients’ information would be transmitted safely and securely to different financial institutions, becoming accessible as soon as new data is added to it.

It must be noted that blockchain won’t replace the EHR itself: it runs seven transactions a second, compared to the EHR’s capacity of up to 12,000. It will, however, be able to act as an extra layer for additional functions, and prove that records are complete and unmodified, recording patient consent when it comes to data sharing.

A smart contract works the same way any contact would, but through a blockchain, which takes away the need for any third-party intermediaries. Only when preset conditions (which have been set in the computer code of the blockchain) are met does a transaction within the contract take place. Smart contracts were first established on the Ethereum blockchain in 2015. Today, they have many uses, some of them listed below.

Smart contracts can make insurance claims a quicker and cheaper process by helping to clearly define when objective criteria have been met. This may not be the case when these decisions are left up to lawyers as this may make the process more subjective, and in turn, lead to a longer and more expensive claim process.

Supply chains can become easier to manage through the use of smart contracts. As with insurance claims, smart contracts can take away any subjectivity, making it easy to verify if set targets are being met within the blockchain.

Within healthcare, smart contracts have the potential to revolutionize the complicated prescription drug supply market in the U.S. by cutting out middlemen, thus considerably cutting costs for consumers.

Smart contracts can make buying and selling a house a lot less stressful. By cutting out the need for a middleman, such as a housing agent, buyers can handle transactions with a potential seller by themselves. Once the conditions of selling a house are met, the purchasing of a property can be completed solely through the use of a smart contract.

Believe it or not, the wonders of blockchain technology have even infiltrated the video game industry. In 2017, a game was released called CryptoKitties. The premise of the game is that you breed, buy and sell virtual cats. It may not be everyone’s cup of tea, but what made this game so eye-opening was that it operated on the Ethereum blockchain.

Since then, blockchain technology has been increasingly adopted in the video game industry, albeit this is still in its infancy. Collectible card games have led the way in adopting the technology. One such example is God’s Unchained, in which gamers can trade collectible cards online by using an Ethereum wallet such as MetaMask. 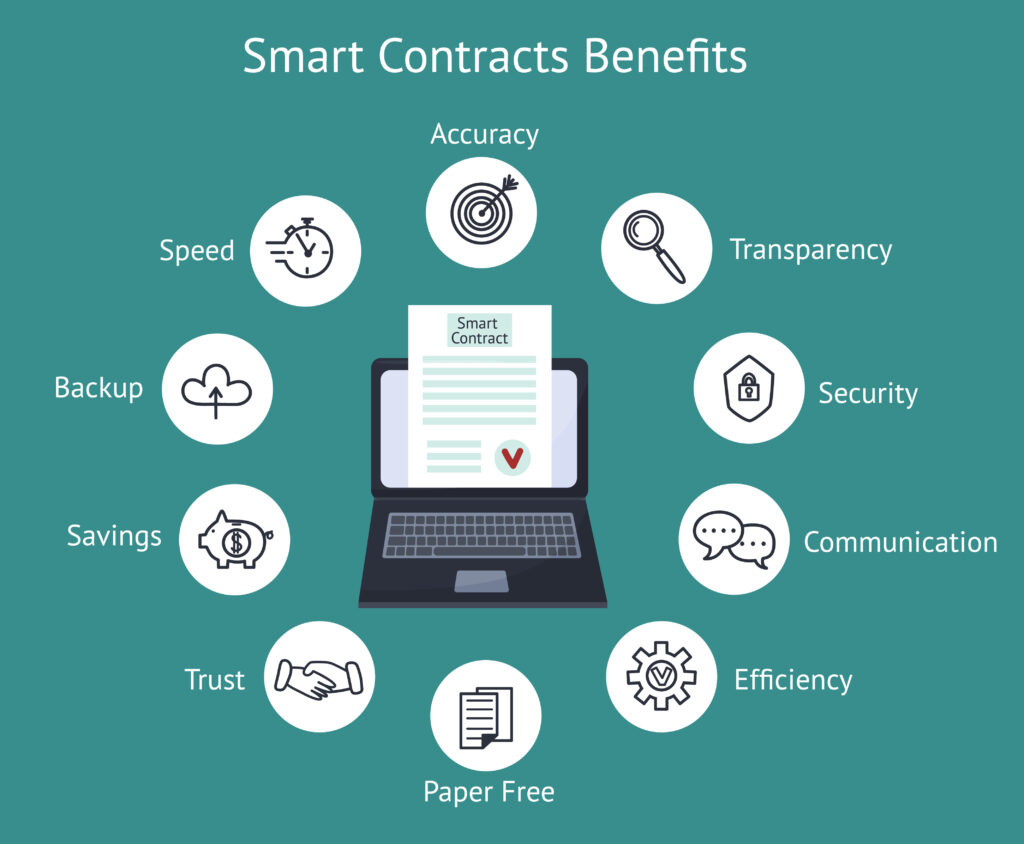 Blockchain Use in the Future

Blockchain technology can help to alleviate poverty and corruption by giving financial inclusion to those who are unbanked.

Besides, blockchain technology also provides tremendous growth potential for small businesses in developing countries, with the decentralized nature of cryptocurrency allowing many of them to truly operate on a global scale for the first time.

This is something that is already starting to be implemented. However, it’s likely that in the future, the move toward maintaining online identities through blockchain technology will excel. By storing personal database information on a public, distributed ledger, the risk of identity fraud will be greatly reduced.

As already noted, blockchain holds massive potential for changing the way healthcare records are met. This capability is likely to extend to government, employment, tax, and even voter records.

In the 2020 U.S. Presidential Election, allegations of voting fraud were made. Blockchain could put such claims to rest in the future. Binance CEO Changpeng Zhao argued on Twitter that using a blockchain-based voting system would not only eliminate any doubts concerning fraud but also enhance the privacy of voters.

As we’ve mentioned, at the heart of blockchain technology is its decentralized, transparent nature. As the technology becomes more widely adopted, this is likely to be reflected in the way companies operate. It will become harder and harder to conceal information, which can only be good news for consumers and the public in general.

The internet has changed the way we listen to music — and, from the artist’s point of view, not necessarily for the better. Since Napster burst onto the scene in the late ’90s, music piracy has been rife.

Even with the advent of legitimate streaming services such as Spotify, income for artists has paled in significance compared to the days when fans bought CDs (and, going further back, LP records and cassette tapes) in droves. But could blockchain shift the pendulum’s swing?

The transparent nature of blockchain could reveal, for all to see, the royalties owed to artists. Streaming services would no longer be able to shortchange these artists. In addition, blockchain technology could help clarify any intellectual property rights issues artists may have by unambiguously indicating who owns the rights to specific songs.

Not only does blockchain anonymity offer an extra level of protection for information, but it also offers convenience for accessing information as never before. Blockchain gives access to information, freely available to everyone.