Explained: What Is a Hard Fork & How Does it Work? 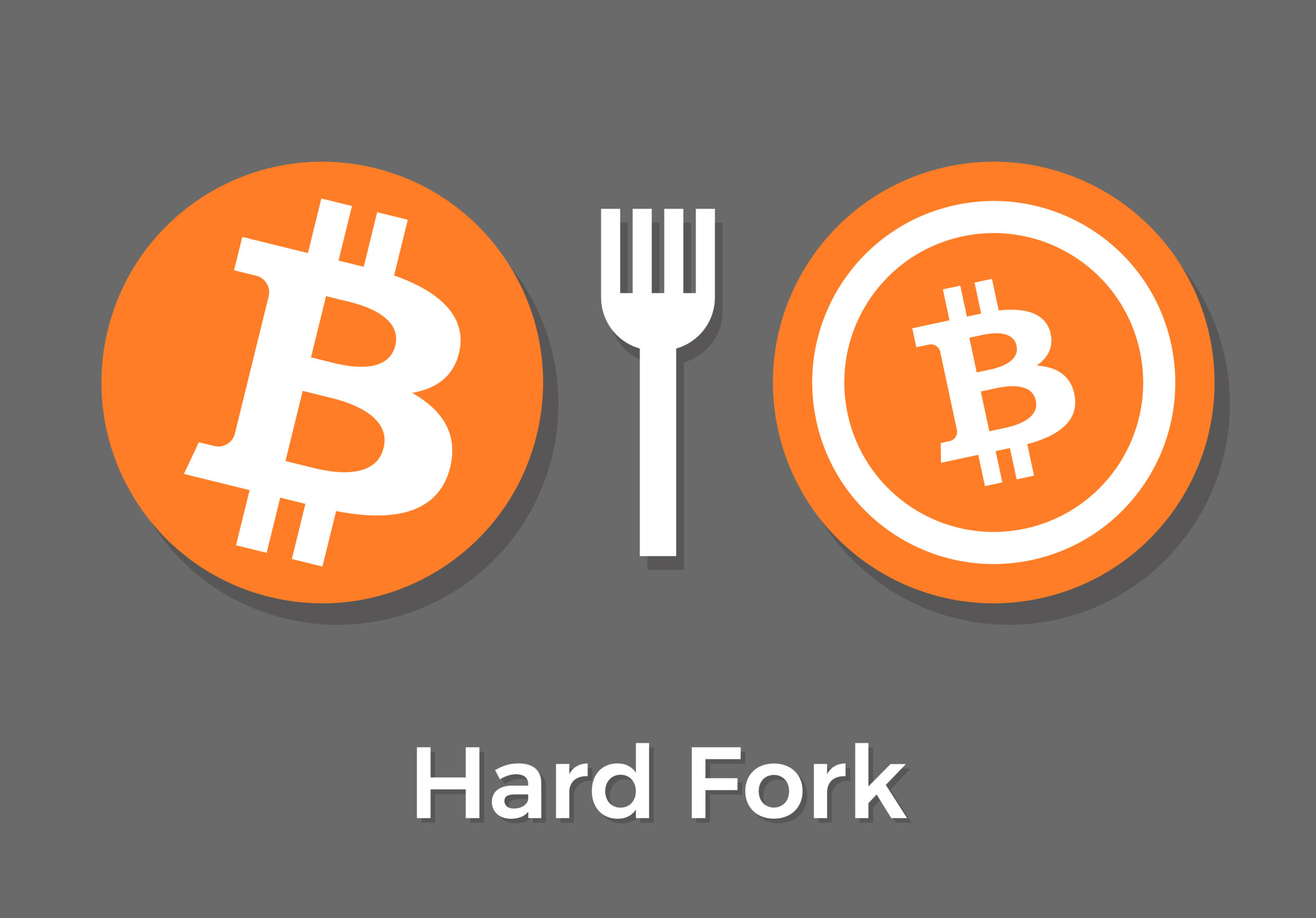 If you’re into cryptocurrency, you may well have heard of hard forks. But what are they, and are they important? In this piece, we’ll discuss what hard forks are, why they happen, the difference between hard forks and soft forks, and why they are an important part of the blockchain.

Additionally, we’ll also discuss some examples of hard forks that have happened, such as Bitcoin Cash and Ethereum Classic.

What Is a Hard Fork?

Essentially, a hard fork splits a blockchain into two, with a change in the blockchain’s code meaning there are now two versions.

Why Do Hard Forks Happen?

Indeed, at the time of writing, many in the world of crypto are looking forward to the long-awaited Beacon Chain Ethereum 2.0 hard fork, which is set to deliver several upgrades to Ethereum 2.0, such as giving nodes the capability to run on mobile devices.

On the other hand, hard forks can also be a part of the promotion campaign to attract attention to a new cryptocurrency. For example, everyone who owned Bitcoin in October 2017, were eligible to bag the same amount in Bitcoin Gold in the way of an airdrop. This was to mark the Bitcoin Gold hard fork.

A hard fork can occur in any blockchain, not only in the Bitcoin network or on Ethereum, for instance, as was the case with the Cardano Mary hard fork in March 2021.

Other Reasons For Hard Forks

There are actually various reasons that hard forks can happen, aside from the reasons mentioned above.

Another reason a hard fork occurs is to refund users if a security breach or hack happens on a blockchain network. In such an occurrence, transactions made from a specified date by attackers are no longer valid. This happens because normally developers quickly fix newly-exploited vulnerabilities after the hack.

Such vulnerability in the code of the DAO project was actually the reason why Ethereum Classic hard-forked — we’ll discuss in detail later. 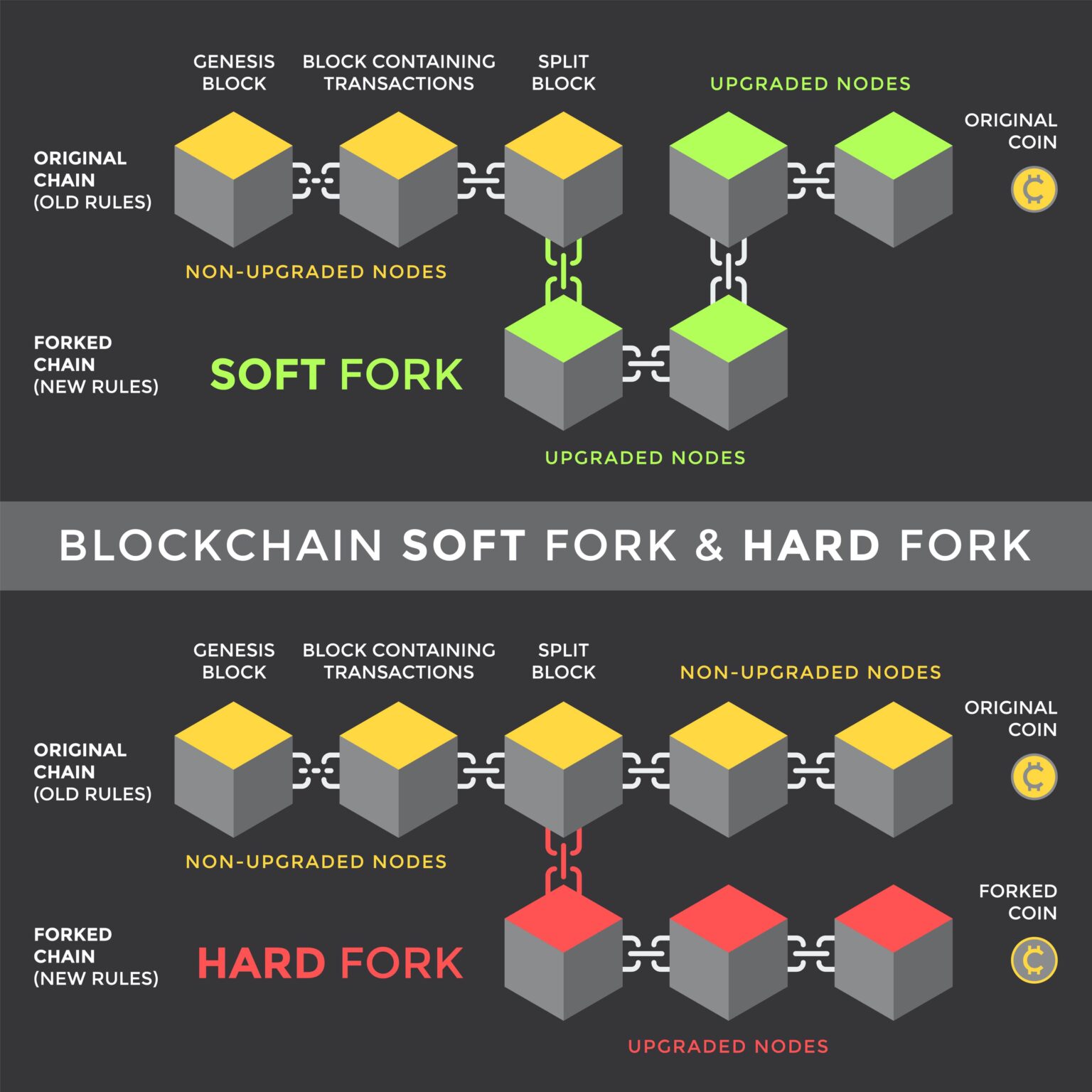 Moving on to the next part of the discussion, let’s take a look at the difference between hard forks and soft forks now, but first – what are soft forks?

A soft fork is a software upgrade that is backwards compatible with older versions of the blockchain. This means that those miners who haven’t yet upgraded to the later version of the software are still able to participate in validating and verifying transactions.

It is much easier to implement a soft fork than a hard fork as only a majority of miners need to upgrade.

Keep in mind, however, that a miner who hasn’t upgraded yet will be affected by the soft fork anyway.

Say, you produce a 1 megabyte block as a non-upgraded miner. You’re still able to validate incoming transactions. However, the update allows only for 8 megabyte blocks to be added to the ecosystem, so you can’t add your blocks – sorry.

With that in mind, you can say that soft forks act as an incentive for miners to upgrade their software, or face being hindered in their functionalities.

In general, three possible case scenarios are most likely to happen when a community decides to hard-fork:

For instance, Bitcoin Classic (BXC) and Bitcoin Unlimited are supported by very small groups of mining pools these days, whereas good old Bitcoin is “still the one I love“, as Shania Twain would sing – it’s the king of cryptos amongst the crypto community and beyond.

OK, no really good examples here, yet, a moderately appropriate example is Roger Ver’s Bitcoin Cash, the blockchain that implemented an increased block size of 8 MB in 2017 (and a 32 MB block size in 2018). Now the digital asset on top of this platform, BCH, is comfortably inside the top 20 cryptocurrencies by market cap, and so it’s fair to say that it has been a success in its own right.

Of course, BCH is not Bitcoin in terms of the price but look at the other hard forks that we mentioned here – they’re selling for under a dollar!

Now, this is where the example of Ethereum Classic is fitting, so let’s look at it in more detail.

In April 2016, a digital decentralized autonomous organization, DAO, was installed on the Ethereum blockchain in order to create a form of investor-directed venture capital fund.

In July 2016, hackers exploited a vulnerability in the DAO code , stealing $50 million worth of ETH. As a result, the Ethereum blockchain was hard-forked at block 1,920,000 to restore all the funds of those who had suffered losses in the hack. This was controversial and led to maintaining the original unforked blockchain as Ethereum Classic (ETC), thus breaking the network into two separate active blockchains, each with its own cryptocurrency.

Without any doubt, Ethereum is the dominant force here. Ethereum is by some distance the 2nd biggest cryptocurrency by market cap, while at the time of writing, Ethereum Classic doesn’t even make the top 50.

Talking about dominance – as we all know and have already mentioned, Bitcoin is the most popular cryptocurrency out there.

Let’s briefly look at the history of Bitcoin hard forks:

So, how many Bitcoin improvement proposals, do you think, have been already made over the past decade?

The answer is a lot. 350 to be exact, but not all of them made it to hard forks, of course.

However the night is young, blockchain is a teenage technology brought to life only a little more than 10 years ago, and we’ll no doubt see a lot more hard forks in the future.

So, in essence, a hard fork is a far-reaching change of the blockchain that requires all the nodes running in the distributed network to move to the newer version (that supports readjusted functionality).

On the other hand, a soft fork is a software upgrade that is backwards compatible with older versions of the blockchain. This means that those miners who haven’t yet upgraded to the later version of the software are still able to participate in validating and verifying transactions (although they are incentivized to upgrade).

Hard forks and soft forks are important in the context of network development. They allow the community to make sufficient changes and upgrades despite the lack of centralized governance.

Thanks to hard forks, blockchains and cryptocurrencies integrate new features and improvements as they’re developed. Without those, the ecosystem would have needed a centralized server to control everything that’s happening in the network. Luckily, we’re not stuck with the centralized servers — but we’re definitely stuck with hard forks.