What Impact Does EIP-1559 Upgrade Have On the Ethereum Blockchain?

EIP-1559 is a proposal first put forward by Vitalik Buterin in 2018 to improve the efficiency of transactions on the Ethereum blockchain. It uses a hybrid system of base fees and tips to optimize the pricing mechanism for gas fees, which are the transaction fees paid for block inclusion.

The base fees, which are burned, are algorithmically determined. These are the minimum fees users pay to add their transactions on an Ethereum block. Tips are optional fees that users may include to encourage miners to prioritize their transactions. EIP-1559 is designed to make the fee pricing mechanism more efficient and transparent and improve the overall user experience.

EIP-1559 is the proposal to be implemented in July 2021 to replace the existing Ethereum gas pricing mechanism. Instead of the current auction-based system, there will be a fixed-per-block network fee (that is burned) and block sizes that expand or contract, according to network congestion.

In essence, instead of demand for block inclusion resulting in transaction fee volatility, some of this translates into volatility in block size.

EIPs typically don’t make the headlines, but EIP-1559 has made a splash. What is the significance of this new proposal that makes it so newsworthy?

EIP-1559 replaces Ethereum’s auction-style fee mechanism with an algorithm that automatically fixes the gas fee. This is being done for several reasons:

Each time a block is mined in Ethereum, two new coins are introduced into circulation. This means that (unlike with Bitcoin) the supply of Ether is unlimited. Holders will see the value of their Ether becoming diluted with time as more coins are created and made available to investors.

EIP-1559 removes coins from circulation by burning the base fee rather than giving it to miners as a reward. This burning mechanism acts as a counterbalance to the unlimited ETH coin supply.

While EIP-1559 is not necessarily expected to reduce gas fees, it will make them more predictable. Under the auction fee mechanism, transaction fees can swing widely, according to market dictates. But with EIP-1559, fees only increase or reduce by 1.125x per block. This brings stability and predictability to the volatile Ethereum fee market. Users will know what they expect to pay with each transaction instead of blindly bidding.

EIP-1559 proposes variable block sizes that can expand to twice the fixed gas target of 15 million gas per block. If a block surpasses 15 million gas, the gas fee goes up, and if less than 15 million, the gas fees will go down. This mechanism ensures the system is not overloaded with large blocks with no block gas limit.

This contrasts with the current Ethereum fee market. Currently, miners must incrementally adjust the block gas limit to include more pending transactions in a block. This system is slow and inefficient. 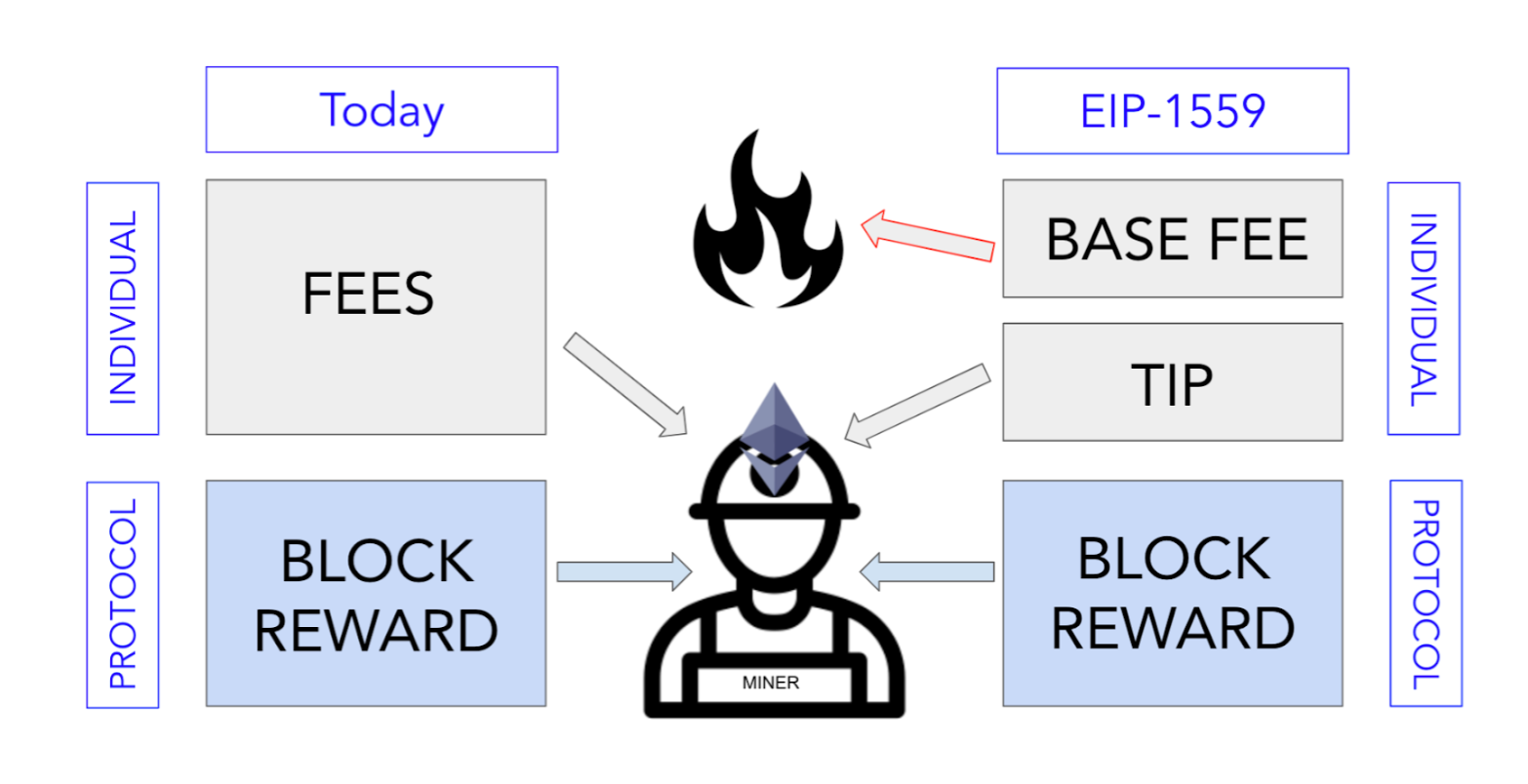 Among the Ethereum improvement proposals, the EIP-1559 stood out as it proposes a new payment method for transactions fees on Ethereum. As it stands,  every operation on the Ethereum network requires gas to execute. The amount of gas is determined by the network, and it’s meant to be proportional to the computational effort needed to complete the operation.

For example, if you’re willing to pay up to 5 gwei to get a transaction added to the next Ethereum block, but other users are bidding just 1 gwei, you only need to bid 2 gwei to win a slot in the block. In the current auction mechanism, you could end up vastly overpaying by bidding 5 gwei, since you have no way to see what others bid (and optimize your pricing accordingly).

However, this pricing mechanism is complex and inefficient, especially for users who overpay for transitions.

Instead of users deciding on the transaction fee to pay, EIP-1559 introduces a base fee that increases or decreases automatically in response to network activity. Third-party sites have historically tried to estimate network congestion to help with bidding levels. Still, EIP-1559 eliminates this need by having the protocol handle the base fee calculation. Users won’t have to worry about overpaying for network resources since the network sets an optimal price for block space. Users can still pay a tip to try to be included.

The base fee is the minimum gas price needed for users to complete a transaction in Ethereum under EIP-1559. This price varies according to the space utilized on each Ethereum block. The target block size on Ethereum is 15 million gas. But when network activity is high, EIP-1559 will allow block sizes to double.

If blocks reach the target block size and are more than 50% full, the base fee can increase by up to 12.5%. Conversely, when network congestion reduces and block space is underutilized, for instance, if it goes back to 0, then the base fee drops by up to 12.5%.

The base fee, which users can only pay with Ethereum’s native cryptocurrency, Ether (ETH), is burned right after payment and removed from the circulating supply of ETH. This ensures miners do not artificially congest the network to drive fees up since there is nothing in it for them. The fee-burning mechanism also means that each base fee payment for transactions on Ethereum reduces ETH supply.

However, EIP-1559 doesn’t leave miners entirely without incentives. The tip (or inclusion) fees are optional ones that users can pay on top of the base fee if they want their transaction to be prioritized. The tip fee goes directly to the miners to incentivize them to handle particular transactions ahead of others.

EIP-1559 was designed to improve the pricing mechanism on Ethereum, as well as the user experience. Having explained EIP-1559 and its moving parts, let’s see how it affects the different stakeholders on Ethereum.

Transaction fees have historically comprised about 5% of miners’ incomes. But recently, due to network congestion, this percentage has increased to 50%. When EIP-1559 is adopted, miners will lose a significant portion of this income. Experts estimate that with 99% of miner revenue from transaction fees being burned, and only 1% being replaced by tip or inclusion fees, miners will experience a 25% reduction in income over 12 months and a 35% reduction over six months.

Other sources of mining income, like the block subsidy of 2 ETH per block and miner extractable value (MEV), remain unchanged in EIP-1559.

The potential risk in expected mining revenue drop is that miners may decide not to support EIP-1559. Due to operational costs outstripping rewards, miners’ potential to turn off their machines could expose the Ethereum network to a 51% attack. A 51% attack is a scenario where a miner or a cartel of miners gathers enough computational energy or hash rate that is more than half the total hash rate.

Users on the Ethereum network will benefit from increased transparency and predictability of the fee pricing mechanism in EIP-1559. They will avoid overpaying for transactions and having transactions delayed due to underestimating the cost of transactions.

The full impact on transaction costs remains to be seen. Eric Conner, who helped to propose EIP-1559, estimates that the new fee system could result in 90% savings in transaction costs. However, EIP-1559 isn’t guaranteed to change Ethereum’s high fees, which have been a significant concern for users. This is because the Ethereum network was designed to handle a limited number of transactions at a time.

In some cases, transactions have remained pending for hours on the Ethereum network — despite users bidding high fees for them. Not knowing if your transaction will be included in the subsequent few blocks, no matter how high your bid, can be unsettling for any user.

Unlike Bitcoin, Ether has an unlimited supply, which makes it unattractive as an investment vehicle. The embedded burn mechanism in EIP-1559 counteracts total supply growth by burning (i.e., removing) a variable amount of Ether out of circulation whenever a transaction is executed. This will have the effect of weighing against the inflationary pressure on ETH prices caused by new issuance.

Ethereum’s monetary policy becomes deflationary when the network activity is so high that the base fee burned surpasses the daily block reward issuance. The increasing network usage could cause more demand with a shrinking ETH supply. This, in turn, could inflate ETH prices, which would benefit ETH holders.

The Ethereum developers are moving forward with the development of EIP -1559, including the changes of codes, it is bundled into the London hard fork, and it’s expected to launch on Aug 4, 2021. The proposal will fundamentally change the fee-burning mechanism, expected to reduce the inflation rate of ETH supply. In fact, the future supply of ETH could even turn negative, which means more coins will have burned than were issued to miners maintaining the network.

Potential Limitations of the Protocol Change

EIP-1559 doesn’t attempt to make the Ethereum network more scalable to accommodate more transactions, which is the major cause of the notoriously high fees.

With EIP-1559, users should no longer need to overpay for transactions consistently. Additionally, the predictability and transparency of the pricing system will encourage the adoption of DApps within the Ethereum ecosystem.

For investors, the burn mechanism will apply negative pressure on ETH supply, making Ethereum more valuable. The burning mechanism will also reduce miners’ income by up to 35%, forcing some miners to shut down their operations. In addition to the possibility of causing a miners’ revolt, there is also a technology risk associated with the adoption of EIP-1559.

In any case, EIP-1559 will be one of the most significant and fundamental changes to the Ethereum blockchain. Stakeholders — including miners, users, and investors — need to be aware of the potential impact and prepare for the changes ahead.